theme:
the next icon in watch culture and design

organized by designboom, in collaboration
with BINDA ITALIA

'modena' design by : nukumi shinji + NBBR inc from japan
design and prototype will be officially unveiled on april 18th, during milan design week 2012,

'the fabric watch' design by : inbal aderka from israel
design and prototype will be officially unveiled on april 18th, during milan design week 2012,

'endless' design by : amelia rachim from italy
design and prototype will be officially unveiled on april 18th, during milan design week 2012, 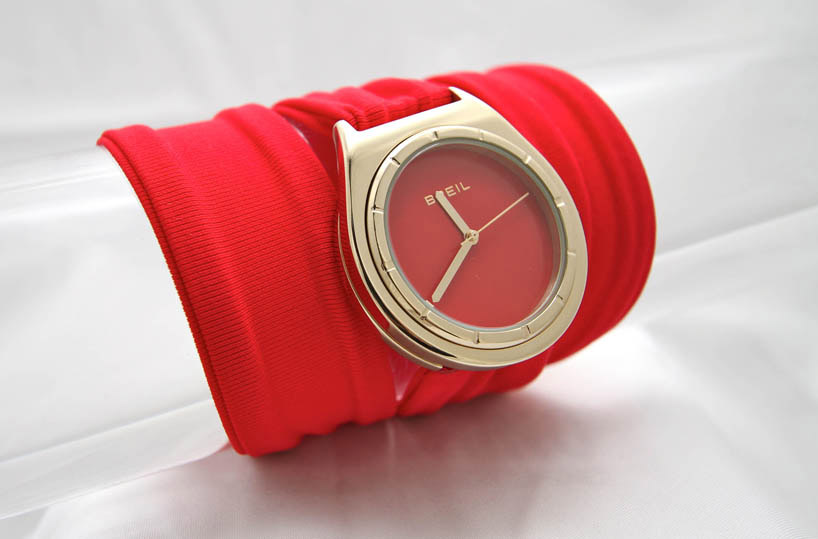 'the fabric watch' by inbal aderka, one of the three winning entries

at an award ceremony, on april 17th in the BREIL showroom and store on corso vittorio emmanuele II, marcello binda CEO of binda italia
and jenny filipetti of designboom announced the winners of the recent design time BREIL competition as part of milan design week 2012.

considered one of the most renowned watch and jewelry brands in italy, BREIL collaborated with designboom on the international design competition
which asked participants to design the next icon in watch culture and design. BREIL is a brand renowned for its original, distinctive style of watch,
bold visual impact, and persistent innovation, which since 2001 has made the company creator of and leader in a new market demand for steel jewelry.

criteria:
designers were asked to envision the next stainless steel watch for addition to the BREIL collection, seeking an attractive,
feasible design which would have success as part of the company's watch line. the watches could cater to male, female or be unisex
and the concepts had to be wrist watches which functioned as analog and not digital means. the competition regarded exclusively
the design of the watch and its mechanisms or other internal components. 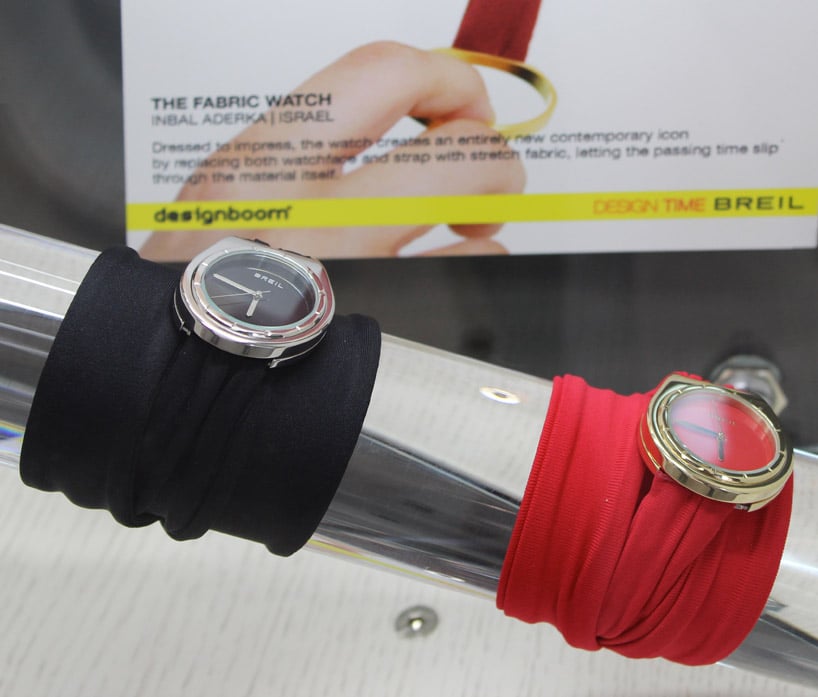 the competition was hosted by BREIL and organized by designboom in collaboration with binda italia.
3037 designers from 96 countries participated to design the next icon in watch culture.
the three winners are, in no particular order:

see all of the shortlisted entries here.

BREIL has said that all three of the winning entries are suitable
for distribution and are reviewing the feasibility of production
to sell
as part of the company's line of watches and jewelry.

although three winners were chosen, designboom and BREIL would like to extend their congratulations to all those who partook.
the results present a high level of creativity, sophistication and general appeal. many are closely associated with cars and the concept of speed,
showing dual finish dials on a racing car dashboard; the straps resemble F1 car tire patterns. innovative features included timers,
stopwatches, and a hybrid use of photo camera lenses in ultra-thin cases. elegantly crafted jewelry pieces with changing aesthetics,
and organically shaped faces focused on ergonomics. the designs explore a variety of topics from comic memorabilia to pop culture.
some brought back the charm of yesterday while others have the futuristic look of tomorrow. all of them meet the goal of designing
a timepiece which represents the importance of time while interpreting the watch culture of today. 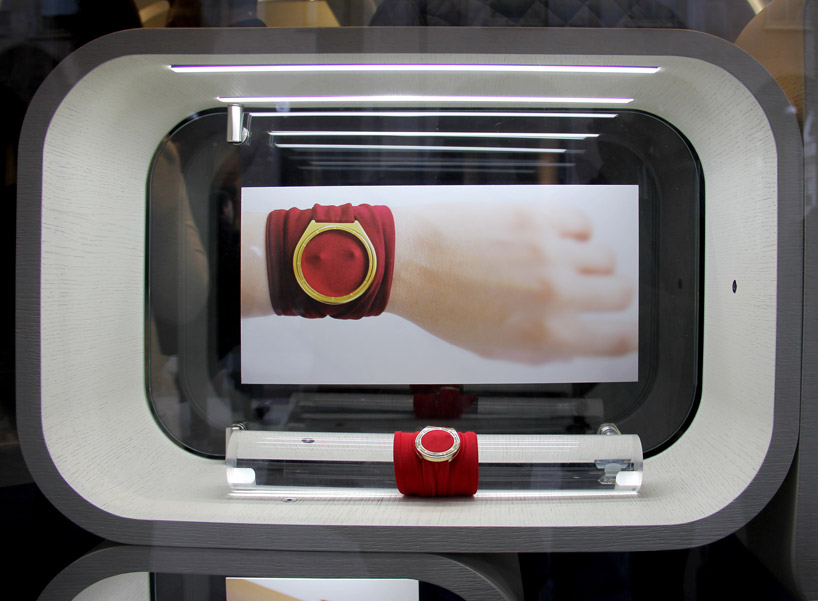 the international jury was composed of:

fabio novembre, industrial designer, italy
'we are in a moment in which research has stopped.
we consume revivals all the time. I think that we cannot live so much
in the past neither be transported in the future.
this competition explores contemporary culture.'

chris bosse, LAVA architects, australia / china / germany
'the potential for naturally evolving systems such as snowflakes,
spider webs and soap bubbles for new building typologies and
structures has continued to fascinate us – within the watch proposals
I selected those entries that take advantage of the geometries in
nature to create both efficiency and beauty.'

nika zupanc, industrial designer, slovenia
'in a world of design which is dominated by rationalism and minimalism,
it is a pleasure to find timepieces with a smart aesthetic.'
in the international press, zupanc's work has been described as everything
from 'punk elegance' (elle USA & clear magazine) to 'techno chic'
(business week & the wall street journal).

marcello binda, CEO binda italia
'the appeal of a fine wristwatch goes well beyond mere time telling.
the diversity of concepts presented by these young professionals give
us a glimpse into what the future of the industry will be.'

birgit lohmann, editor-in-chief designboom.com
'we are pursued by time and paradoxically never have enough of it.
if you haven't come across the wristwatch of your dreams just yet,
you must not be looking hard enough. the shortlisted wristwatches
of this design competition are sure to show you a good time.' 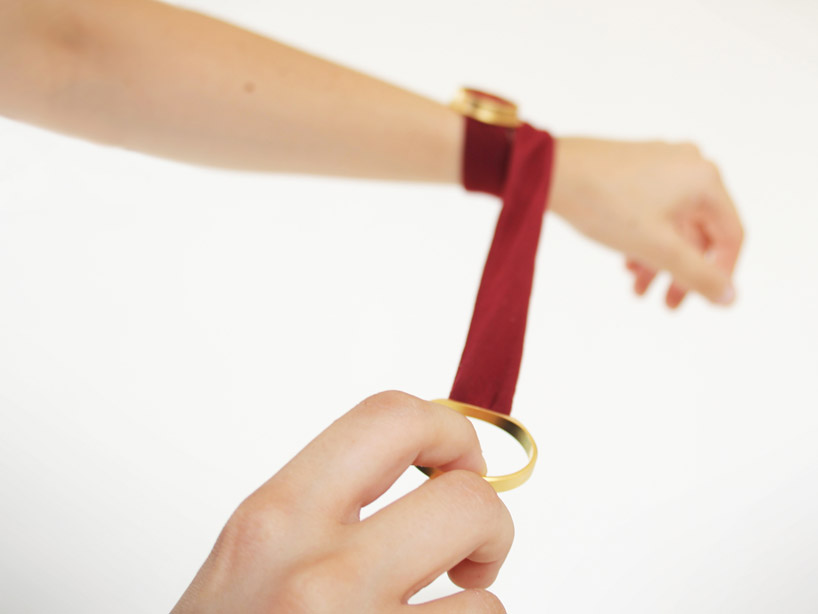 demonstrating how 'the fabric watch' works 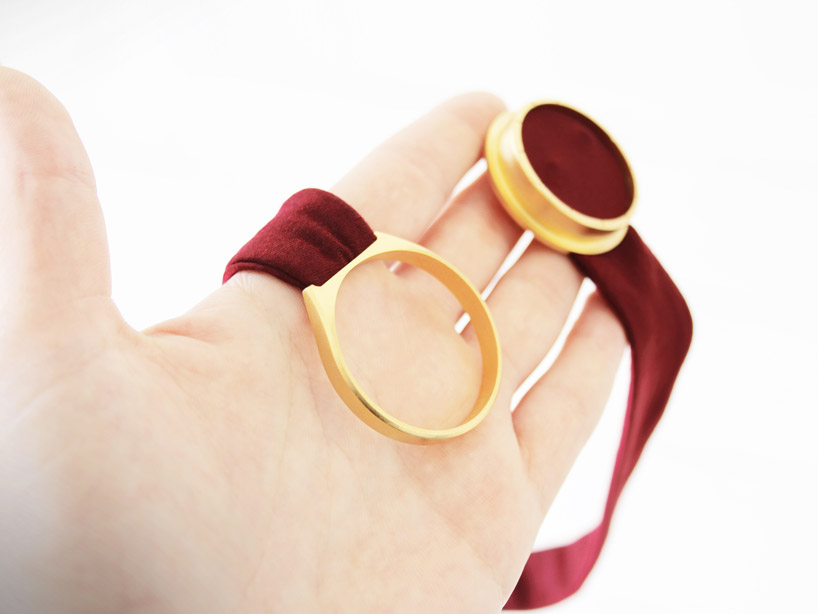 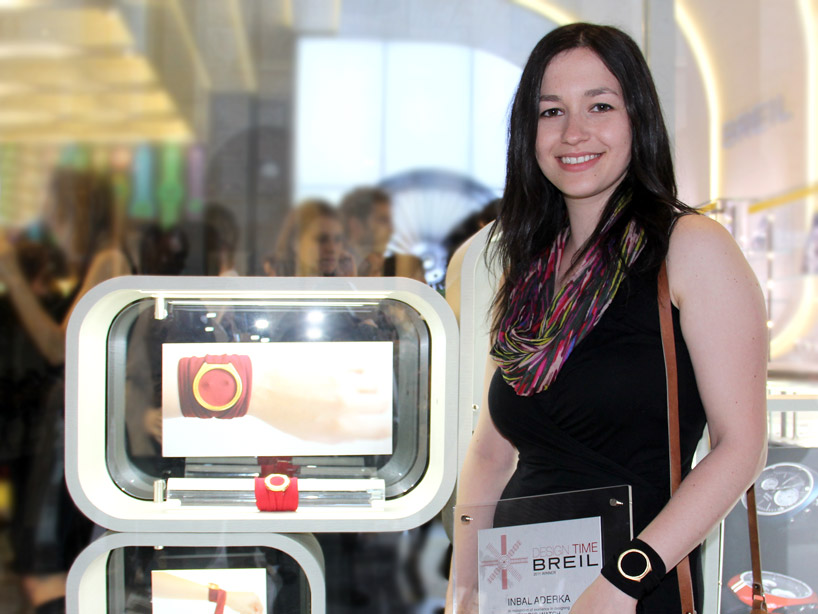 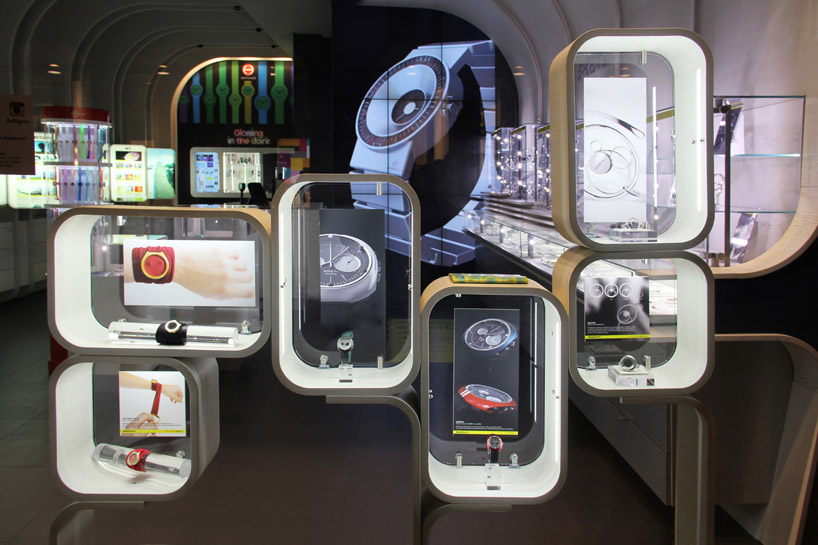 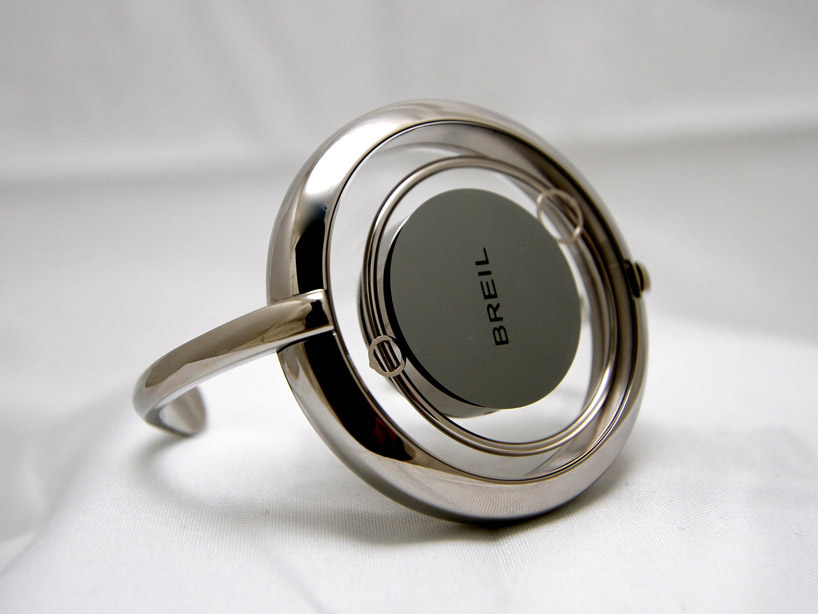 'endless' by amelia rachim of italy 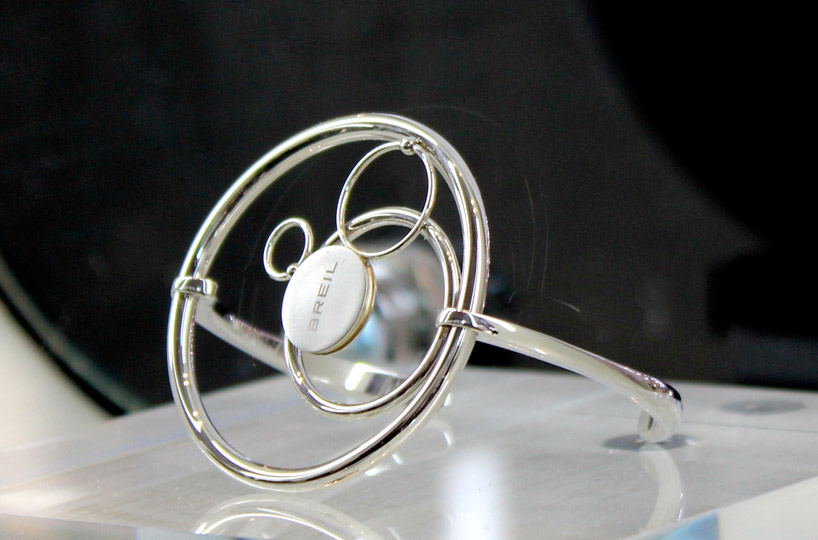 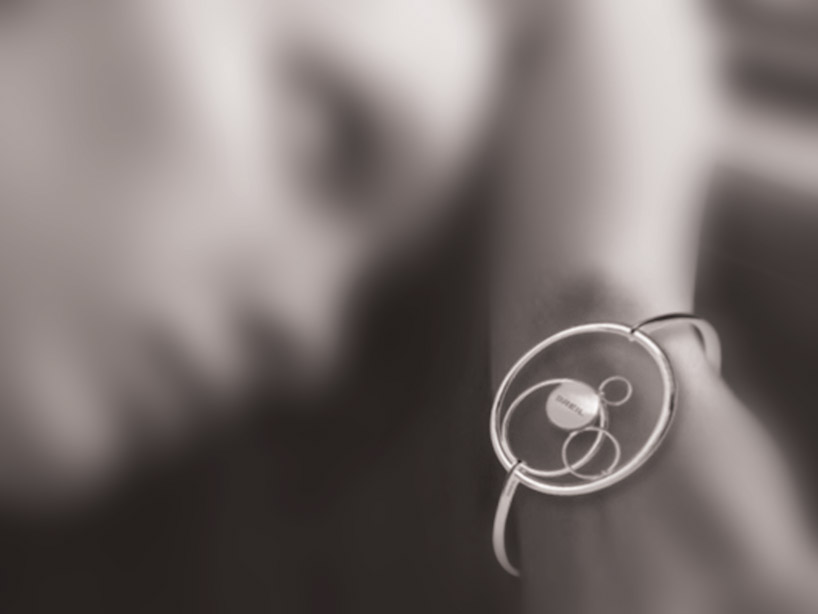 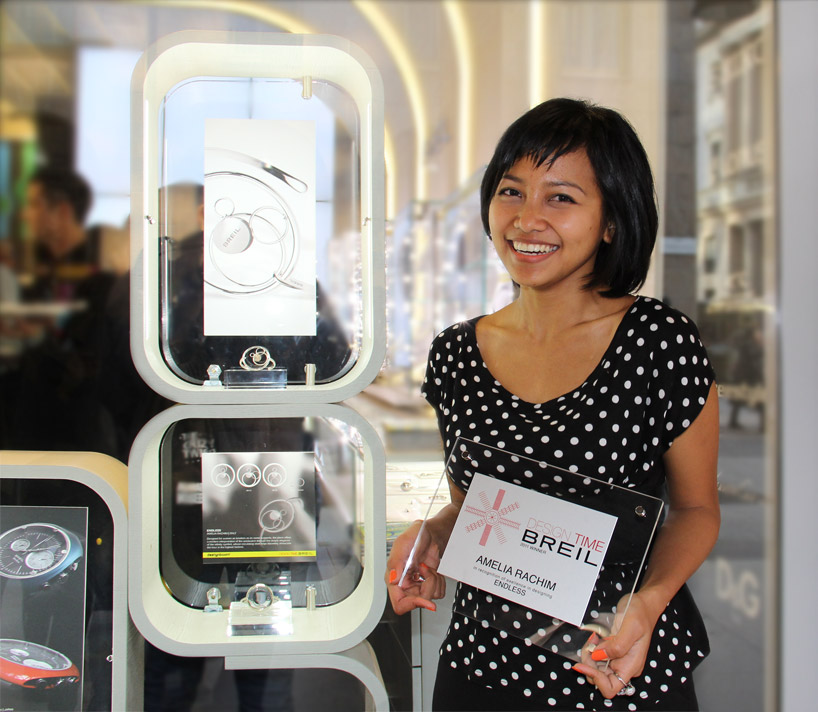 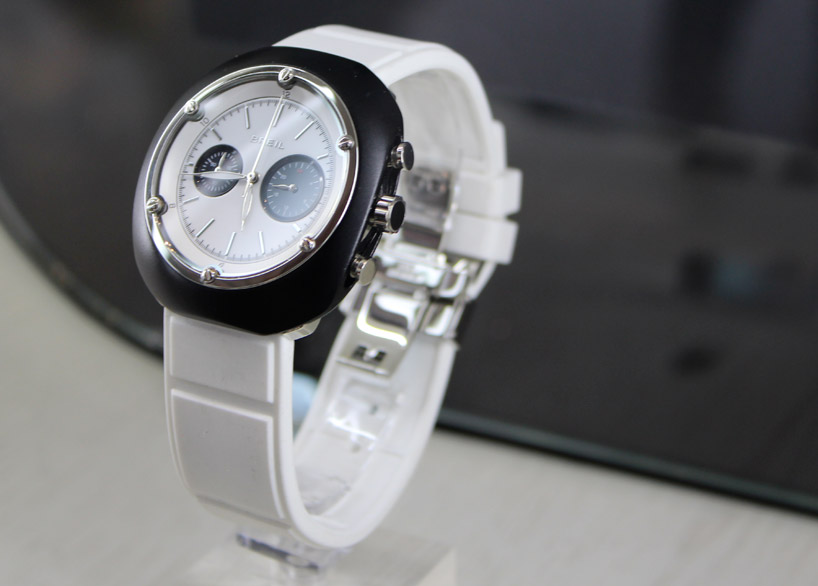 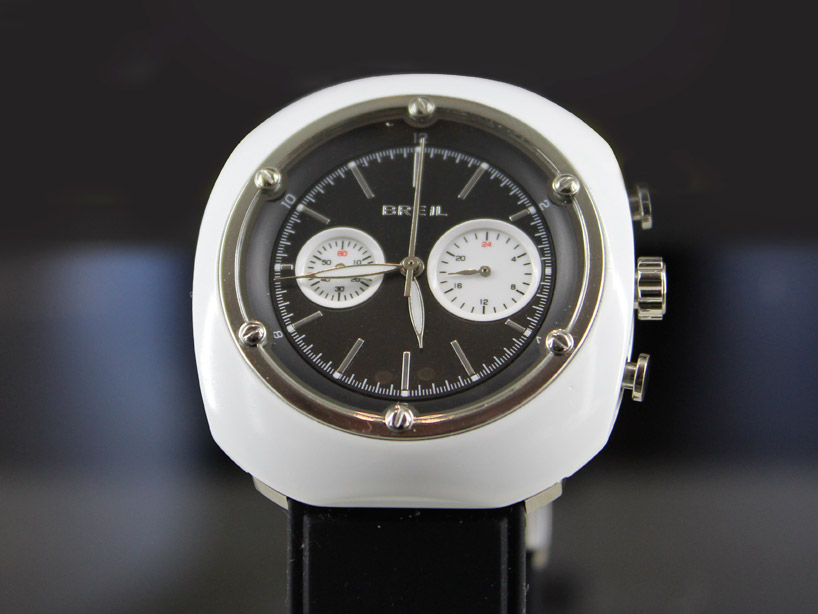 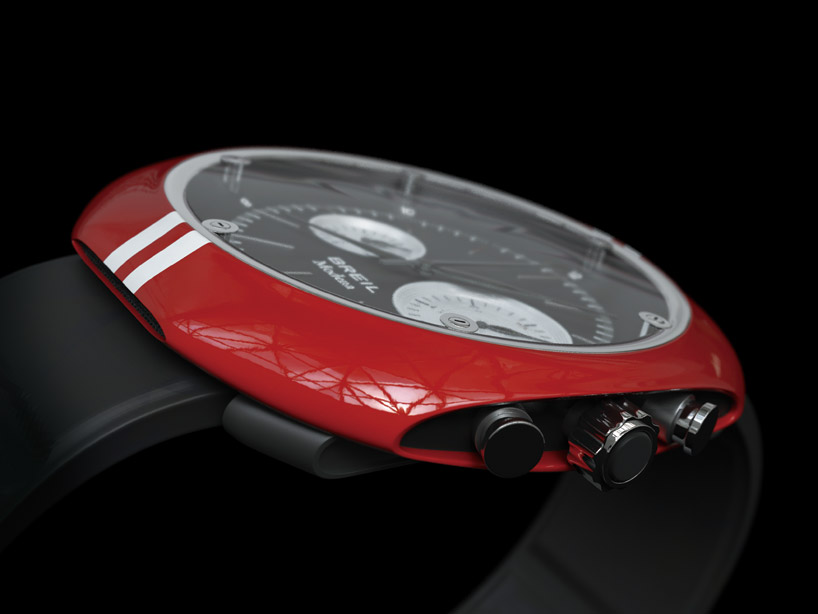 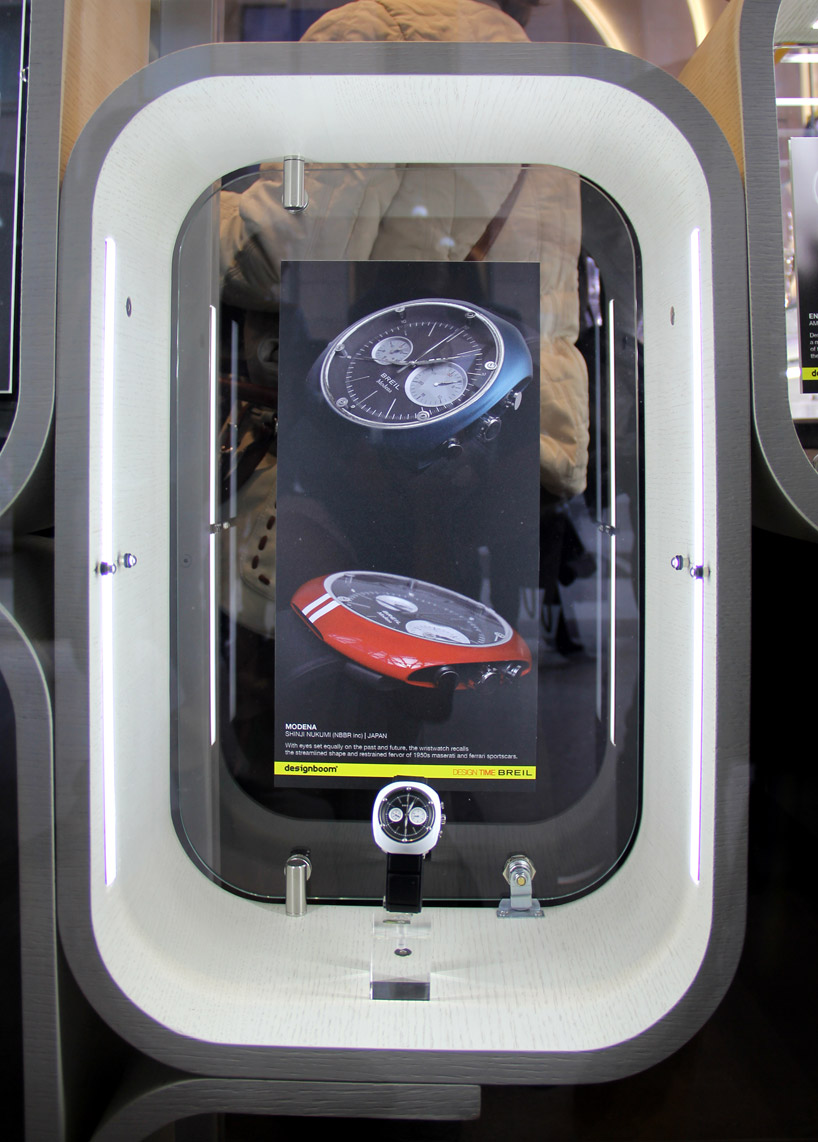 'modena' prototype on show at the BREIL showroom
image © designboom 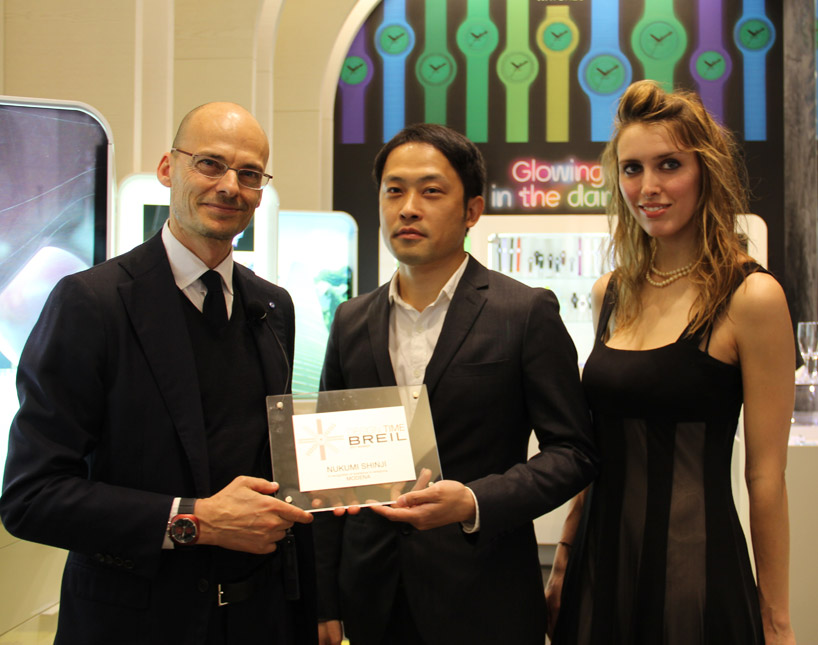 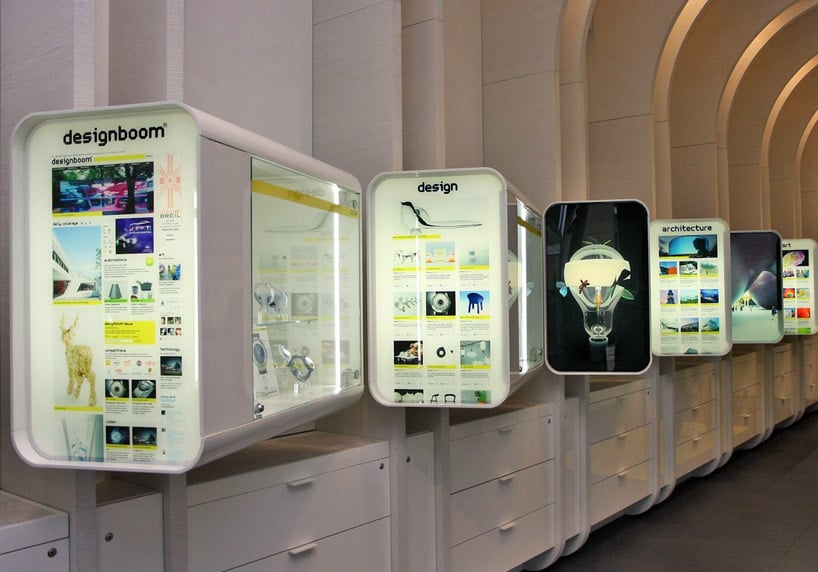 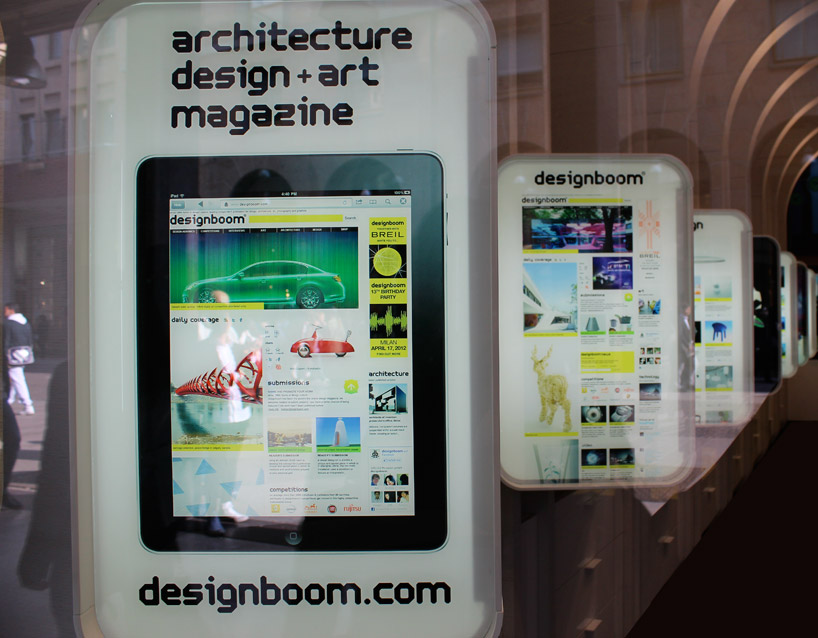 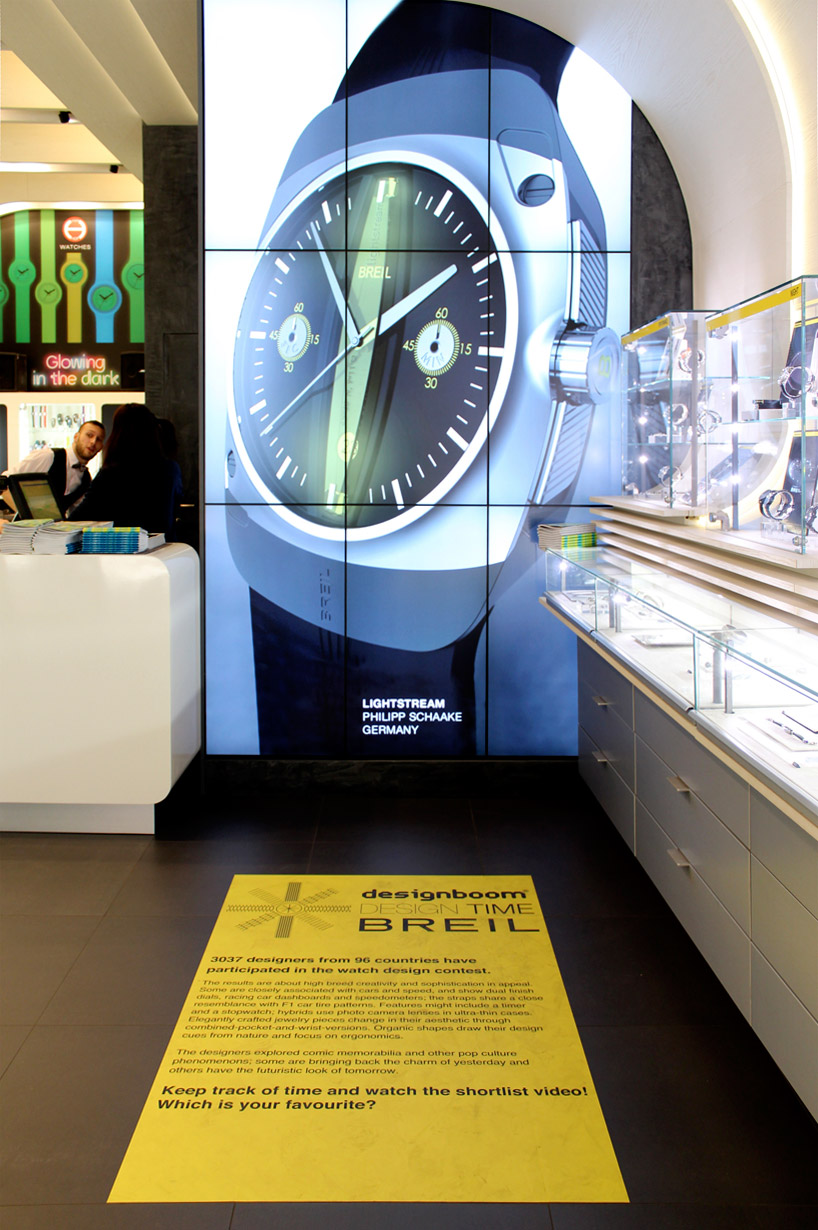 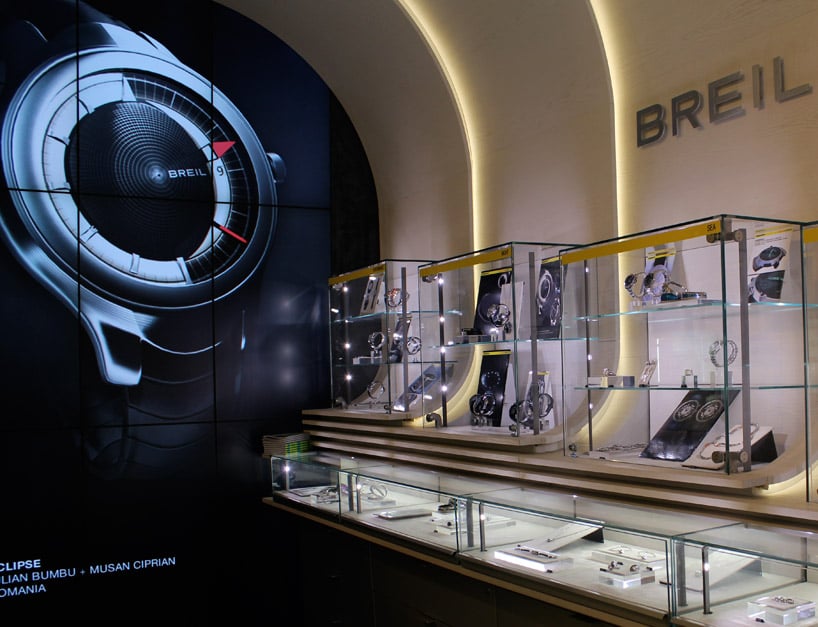 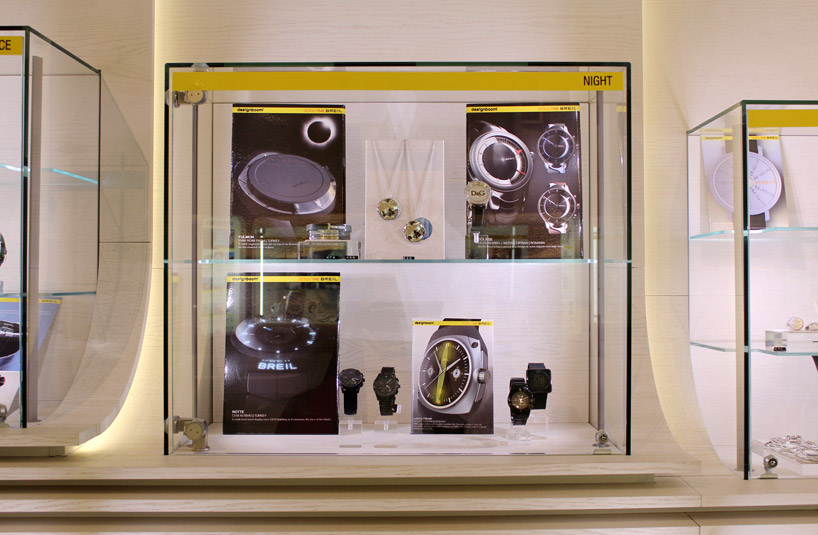 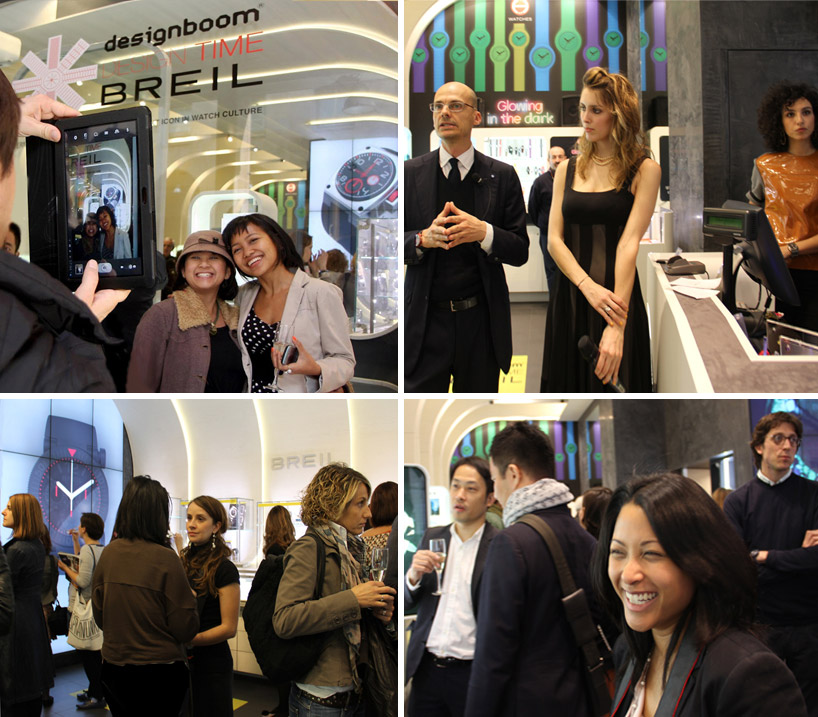 an introduction to the shortlisted entries
video © designboom

---
about design time BREIL
BREIL is a brand renowned for its original, distinctive style of watch, bold visual impact, and persistent innovation,
which has since 2001 made the company creator of and leader in a new market demand for steel jewelry.

about binda italia
in 1906 innocente binda opened a watchmaker's stop in a small town on lake maggiore.
today it is one of the biggest names in watch design and distribution, owning brands such as BREIL, hip hop and freestyle.