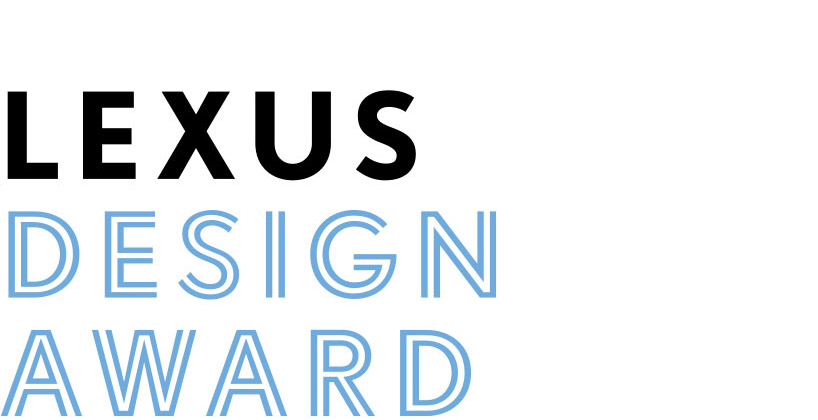 designboom in collaboration with LEXUS, announces the winners of the 2012 LEXUS DESIGN AWARD, an initiative which aims to nurture and support young creators.

the theme for this year's competition was 'motion' - left completely open for participants to interpret - with the jury looking for design that responded to various issues in daily life relating to this topic and find solutions. from 2100 designers, 12 overall winners have been selected. unlike most awards, two winners will receive the opportunity to work and consult with world-famous designers that will help them realize their ideas.

tangent: hideki yoshimoto/yoshinaka ono and hitomi igarashi from japan, have been granted the opportunity to participate in the program and will be mentored by sam hecht (england), and junya ishigami (japan) respectively, collaborating for a two-month period in order to produce prototypes of their designs which will be exhibited - alongside displays of the 10 other winning entries - at the LEXUS space during milan design week in april 2013.

president of the jury is pritzker prize recipient toyo ito

here is a round-up of the 12 nominated concepts -- stay tuned for more in depth features on each of the projects!

'inaho' by tangent: hideki yoshimoto and yoshinaka ono from japan - selected to be mentored by sam hecht

'inaho' by tangent: hideki yoshimoto and yoshinaka ono from japan was influenced by the image of a rice plant slowly swinging in the wind, the interior light glowing gold in the dark and gravitating in a gentle swaying motion towards people when they come close to it.

'making porcelain with an origami' by hitomi igarashi from japan are cast in special paper moulds which have been formed from the application of the special japanese folding technique.

a compact electric scooter that can be easily folded

'Bscooter' by goula/figuera (álvaro fernández-goula and pablo figuera) from spain is an electric scooter which has been specially conceived for short trips. its overall design has been fashioned off that of the swiss army knife -- the seat, handlebars and foot boards are hidden inside its body when the vehicle is folded.

a boat specifically built for the calm refection of thought

'calm kayak' by mani zamani from iran  is not meant to be used for extreme sport. instead, its main purpose is for one to comfortably sit within and gently float along a calm river, lake or city canal while contemplating and reflecting on their own thoughts.

'fly' by dear cai (dong bo cai and zong han tsai) from taiwan is an LED-based lighting device which depicts birds in flight, their appearance indicating and functionally controlling the number of people on average within subway cars.

'klava' lamp by rudy davi from italy is anchored by a combination of masses, therefore the numerous barycenters allow the lamp to stay balanced in any position, offering different light settings.

'natural motion for natural music' by moonchul kim from korea

use the most natural motions to operate this speaker

'natural motion for natural music' by moonchul kim from korea is a concept which began in seeking meaning in our most mundane actions. the design utilizes our basic and natural behaviours to employ the functions of the device, eliminating the need for any user education.

changing your motion can change your emotion

'slides bridge' by zhufei (zhu fei and zhu tian hui) from china brings a little surprise to our ordinary lives. people can slide down the bridge like a child, reconsidering the way in which we move from one area to another.

understanding the importance of water through unique fountain patterns

'the drinking fountain' by atelier OPA (yuki sugihara, toshihiko suzuki and munetaka ishikawa) from japan transforms water into a butterfly, dragonfly, spider or cherry blossom as it flows out of the tap, making the experience of turning a faucet on, more poetic.

powered by nature and saving our lands in a changing climate

'weaving a home' by abeer seikaly from jordan / canada

'weaving a home' by abeer seikaly from jordan/canada is a reinvention of a tent as seen by its structural fabric and the way in which it is woven to form the dwelling.

'world clock' by masafumi ishikawa from japan indicates time in any zone. the names of 12 major global cities are written on each of its facets. rotating the gadget to a particular city, allows the indicating hands to remain still, and tell you the current time of that metropolis.

on show during the upcoming milan design week

the exhibition 'LEXUS design amazing 2013' is a collaboration between toyo ito and akihisa hirata and takes place at milan's museo della permanente art gallery (via filippo turati, 34) from april 10th to 14th, and will be accompanied by an exhibition displaying the 12 winning projects of the LEXUS DESIGN AWARD, co-organized by designboom. hope to see you there!