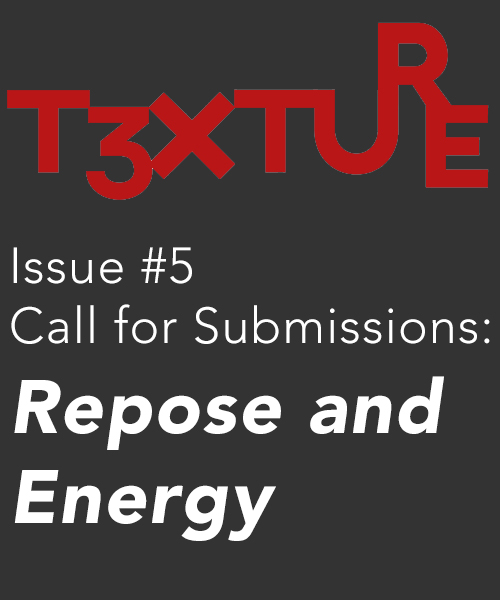 
T3XTURE is an annual, international publication for architects, artists, writers, and designers interested in the haptic in architecture and art. Texture in architecture is the layering of geography, structure, space, constructions, materiality, digital fabrications, passages, ideas, and the movements of human activity in a composition thus determining the overall qualities of a form or place. T3XTURE seeks to elevate the discourse on texture to the level currently paid to space and tectonics. Each issue collects architectural projects, drawings, poems, and photographs from contributors from all over the world.

The repose necessary to all beauty is repose, not of inanition, nor of luxury, nor of irresolution, but the repose of magnificent energy and being; in action, the calmness of trust and determination; in rest, the consciousness of duty accomplished and of victory won; and this repose and this felicity can take place as well in the midst of trial and tempest, as beside the waters of comfort.
-Ruskin


Our interest in repose and motion follows from our exploration of the origin of ornament (kosmos) in earlier issues of T3XTURE . As Bloomer noted in T3XTURE #4, the Greeks adopted a term for world (mundus, also meaning “cosmetics”) derived from “ornament,” on account of the diversity of elements and the beauty of the heavenly bodies. They call it κόσμος, which means “ornament,” for, with our bodily eyes, we see nothing more beautiful than the world.”

The cosmos is in eternal motion; there is no rest; the sun, the moon, the clouds, the seas are always moving.

Repose is re-pause. It is a stopping before returning, a time for reflection. It is also a repositioning, a rearranging in space. It is a city in repose before an energizing renewal; a pause before a de-energized state in an entropy-driven universe. It is the place in a painting or composition where one’s eye comes to rest. It is a place of solitude in a garden or room.
​
T3xture is seeking essays, poems, building and landscape projects, and art that address the diad of Repose and Energy.
We are looking for original and previously unpublished work. Submission Guidelines are posted on the T3xture website