‘flexibility – design in a fast-changing society’ is one of the many events taking place in turin this year in conjunction with the city being named the ‘design world capital for 2008’. the show consists of nine projects by international designers installed at a former prison ex carceri ‘le nuove’.

for his contribution to the flexibility exhibition ross lovegrove installed a rotating metal sculpture. light is beamed onto the pendant and reflected throughout the room.

‘the object represents a suspension form that is eternal in its unification of light, space and time.
its tough, vertical form is frozen into an elastic surface, mirrored to relate to all worlds it inhabits.
in this context it becomes a gentle breath of optimism, a beacon of freedom in an environment so
charged with dark emotions from the past.‘ 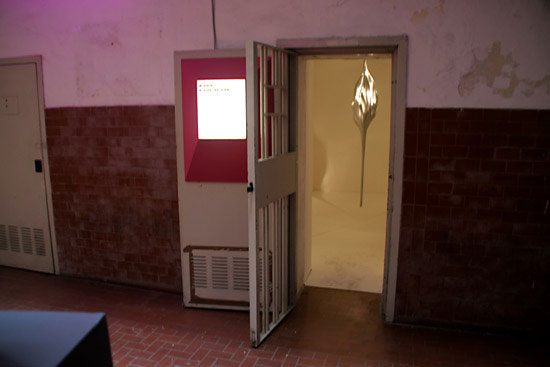 ‘the work I create conceptually relates to my interest in liquid forms that are evolutionary on the one hand as their origins are deep and primordial, but on the other there is a need to create objects which are fresh and new born, products of a new era of enlightenment, charged with another presence that touches the creative soul’. 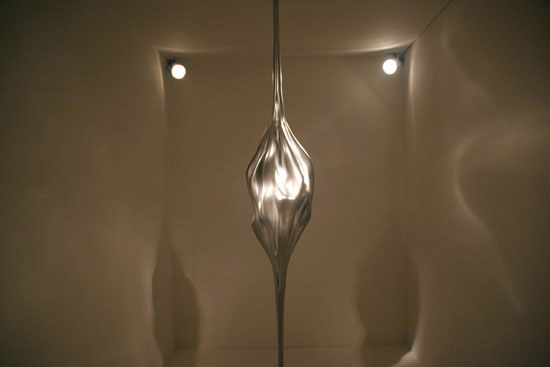 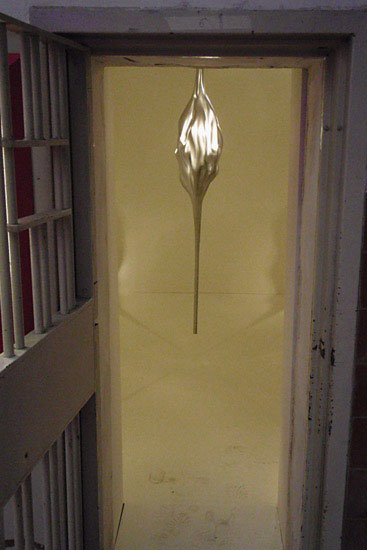 ‘they are created digitally in an advanced contemporary process sculpting via algorithmic and NURBS manipulation directly on the cinema display. the object has been modeled to live inharmony with rooms of a human scale as the light is laser beamed onto the tessellations, relaying back ghostly images that are truly bio-morphic and ethereal in their random virtuality‘ RL

ross lovegrove ross lovegrove was born 1958, cardiff, wales. he graduated from manchester polytechnic in 1980 and later acheived a masters degree at the design of royal college of art, london, 1983. in the early 80’s he worked as a designer for frog design in west germany. he later moved to paris as a consultant to knoll international. returning to london in 1986 he has completed projects for airbus industries, kartell, ceccotti, cappellini, idee, moroso, luceplan, driade, peugeot, apple computers, issey miyake, vitra, olympus cameras, japan airlines and toyo ito architects, japan. lovegrove was awarded the world technology award by time magazine and CNN in november 2005.