for the second straight year, the toronto design duo MADE (julie nicholson and shaun moore) curated the design exhibition radiant dark. the show features 33 canadian design studios, showing off 39 new works in a refurbished loft space in the city’s west end. the show’s theme and subtitle ‘elegant corruptions’, gave the designers an opportunity to explore the relationship between these seemingly opposing terms. each work interprets the theme differently, but they all add new perspectives to familiar objects. the works on display cover a range of mediums including furniture, lighting, ceramics, textiles, glass and metal works. the annual show gives the public a glimpse at the ever-changing nature of contemporary canadian design. 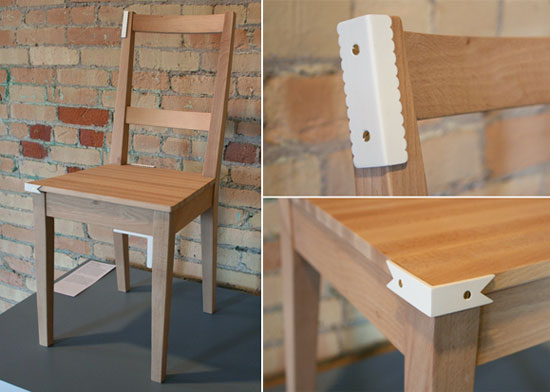 ‘make a mend’ by loyal loot

these furniture jewelry elements serve to revive old and damaged pieces, while adorning them at the same time. made from metal alloys, the pieces serve a useful and ornamental purpose that was inspired by repair hardware like trunk corners. 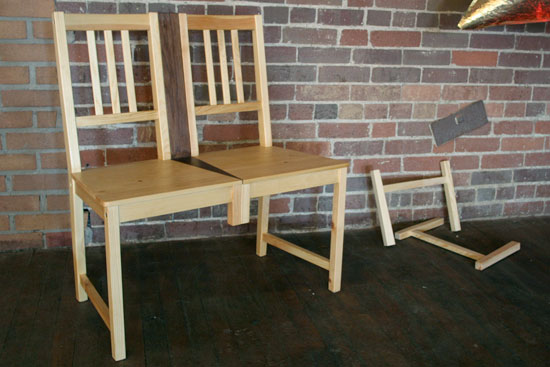 two archetypal chairs have been reformatted as a bench in this piece. the chairs are combined together using an obvious joint, which celebrates their relationship together. the removed elements have been discarded to the side. 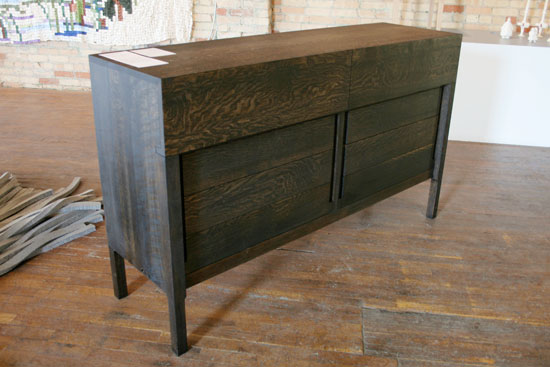 formal european furniture styles have altered over time according to social, political and value changes. earnshaw has used the napoleonic cabinet archetype and pared it to its essential elements. the lavish surface ornament has been reduced to raw materiality and the form has been carefully proportioned to reveal a classically architectonic form. 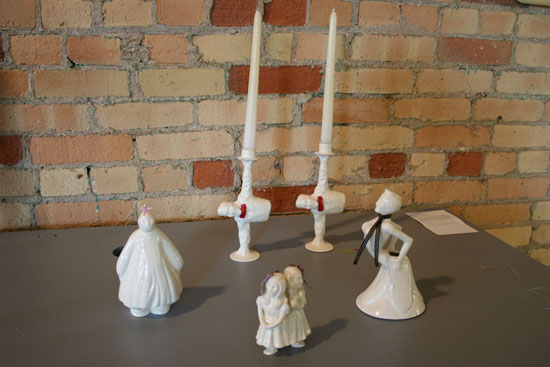 this series of ceramic tableware pieces are modeled after these famous ‘sideshow freaks’ from the circus. while these oddities are from another time, the works hint that maybe we haven’t quite evolved from our obsession with normality. 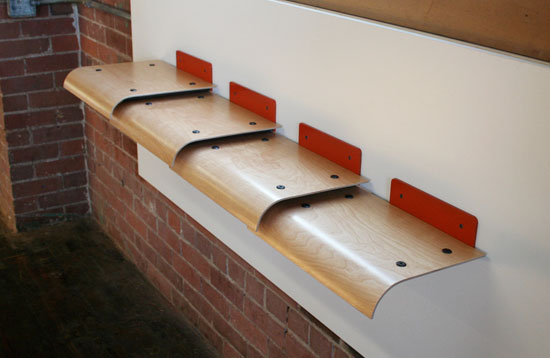 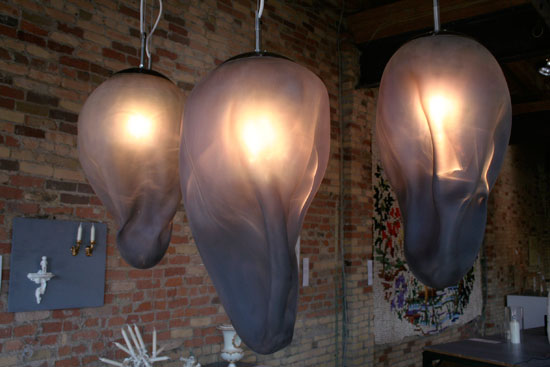 this series of pendant lamps ins made from sandblasted, mouth-blown glass which is first formed into perfect ovoid forms. the glass is then subjected to a prolonged heating process, deforming the shape. the air inside is then sucked out, further decaying the form. 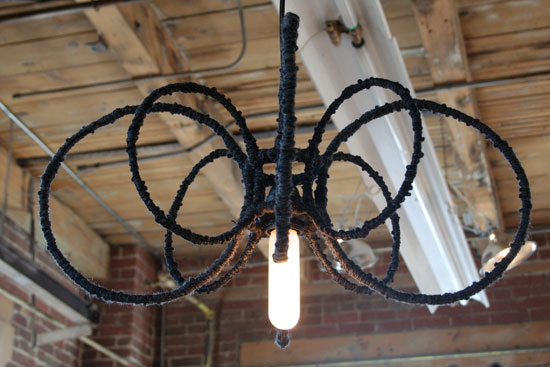 ‘base lights’ by valerie dennis

as a glass artist valerie dennis typically uses simple wire and tape forms to prototype her glass designs. this formal exploration led her to create these lighting pieces that wee equally inspired by the lamps of george nelson and spirograph drawings. the skeletal forms are made from a wire base which is them wrapped with tape, paper and felt. 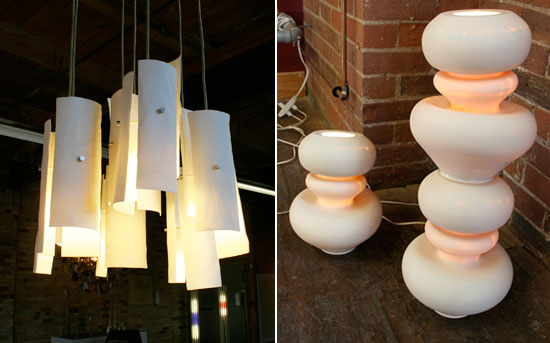 l: this metal and ceramic chandelier appears to be a moment frozen in time. what was once a perfect objects seems to have cracked along its grid lines. like the corrupt lamp, the light itself is scattered around, bouncing off the different elements.

r: this lamp series is made form porcelain and takes its form from space filling models (3D molecular structures) of poisons. the work demonstrates the sensuous form that these deadly poisons take. 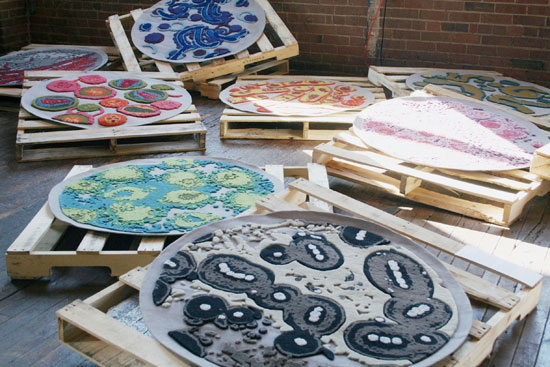 the carpets in hisey’s ‘dirty dishes’ reference imagery typically associated with microscopic petrie dishes. the designer has blown these up and transferred them to textiles that hint at decomposition. 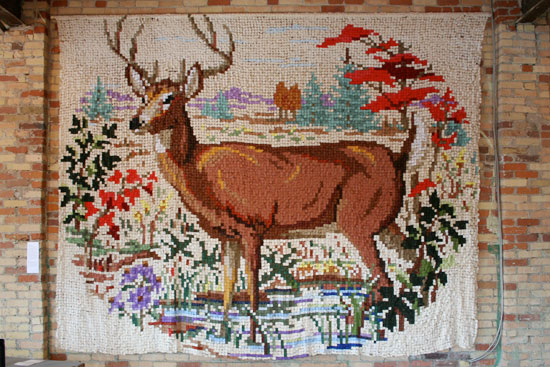 this massive ten by fifteen foot tapestry uses the traditional image of the stag and blows it to new proportions. the work uses small fabric scraps which have been sewn together to create a pixelized image that alters depending on the viewers distance. 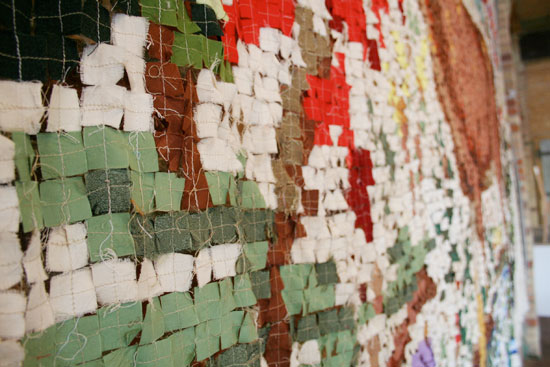 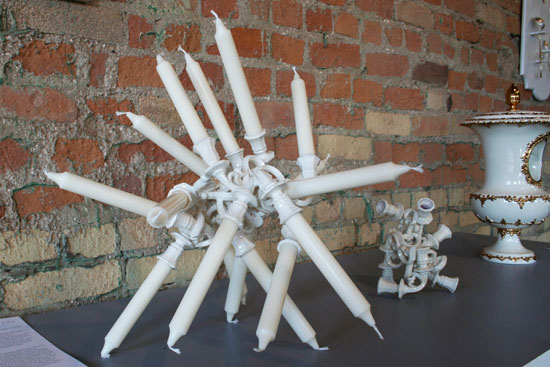 ‘torrent’ by by jeremy hatch/ricochet

like hatches other works, ‘torrent’ subverts the expected, turning a series of candle sticks into a chaotic intertwined form. this candelabra has no front, back or top, and the candles themselves provide structure to the final form. 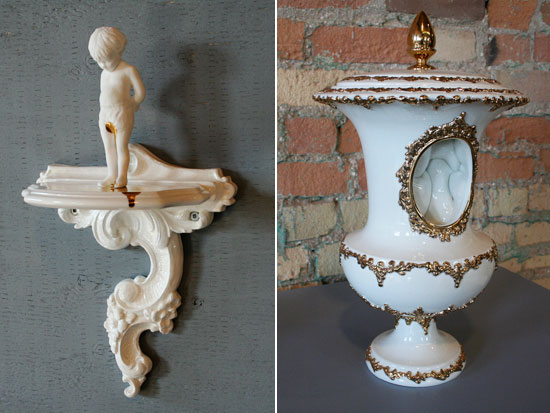 based off traditional ceramics, hatch’s work involves a series of interventions and deconstructions to create the final piece. ‘accident’ is a seemingly normal decorative ceramic piece complete with halcyon imagery, however a gold streak drips from the figure, subverting the meaning. ‘urn’ takes a similar approach, juxtaposing the traditional sevres urn form with soft looking interior. the work takes its queue from the anthropomorphic name given to elements of pottery (foot, lip, neck, etc.) 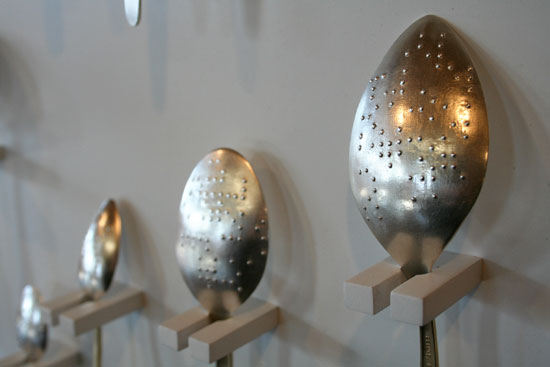 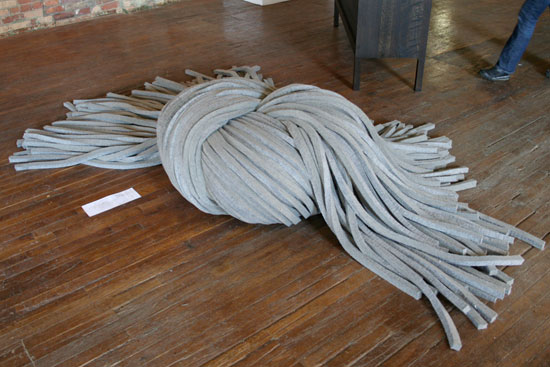 made from pressed wool felt strips this ‘sitting object’ is a direct reference to knotted yarn balls. the knot in this case is used as a structural component and can be undone and reties in as many ways as there are knots. 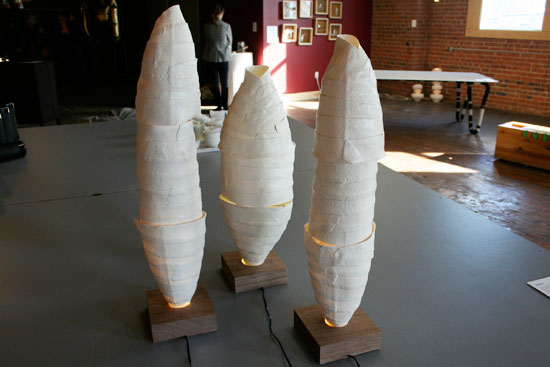 these table lamps are created by pushing the structural limits of porcelain, allowing it to warp and sag as it forms. the result is a translucent quality that allows the porcelain to bleed light through it. small vessels are stacked to create the final forms that are reminiscent of the indigenous totem poles. 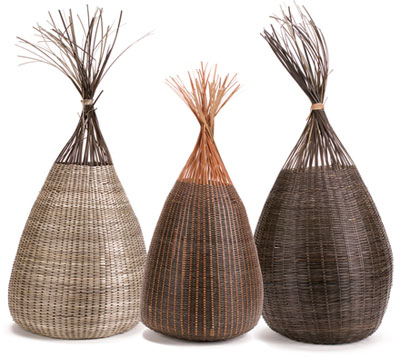 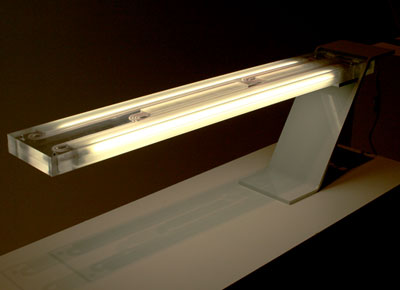 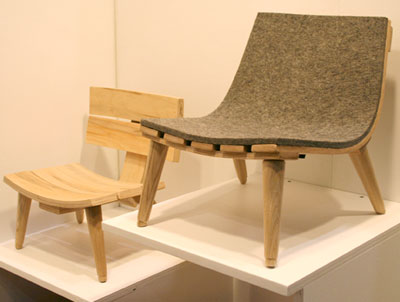 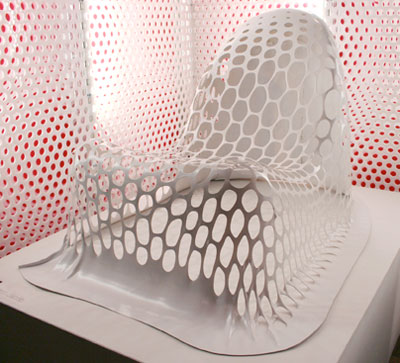 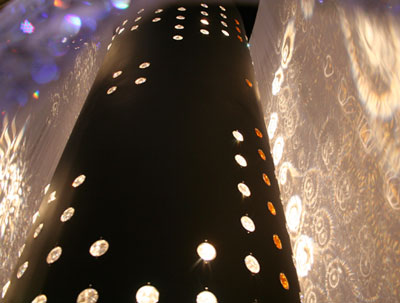