today is the last day of the 2015 los angeles film festival, which over the last four days showcased 74 feature films—including 39 world premieres—60 short films and over 50 new media works representing 35 countries. to communicate the event pentagram’s emily oberman and team created a brand identity and ad campaign around ‘the magical substance of creativity’.

‘film is an art, and that’s what we wanted to show in the trailer and branding’ says oberman. ‘we love working with film independent and are honored to help the LA film fest make a strong impression this year, and we look forward to unveiling our new identity for film independent this fall.’ 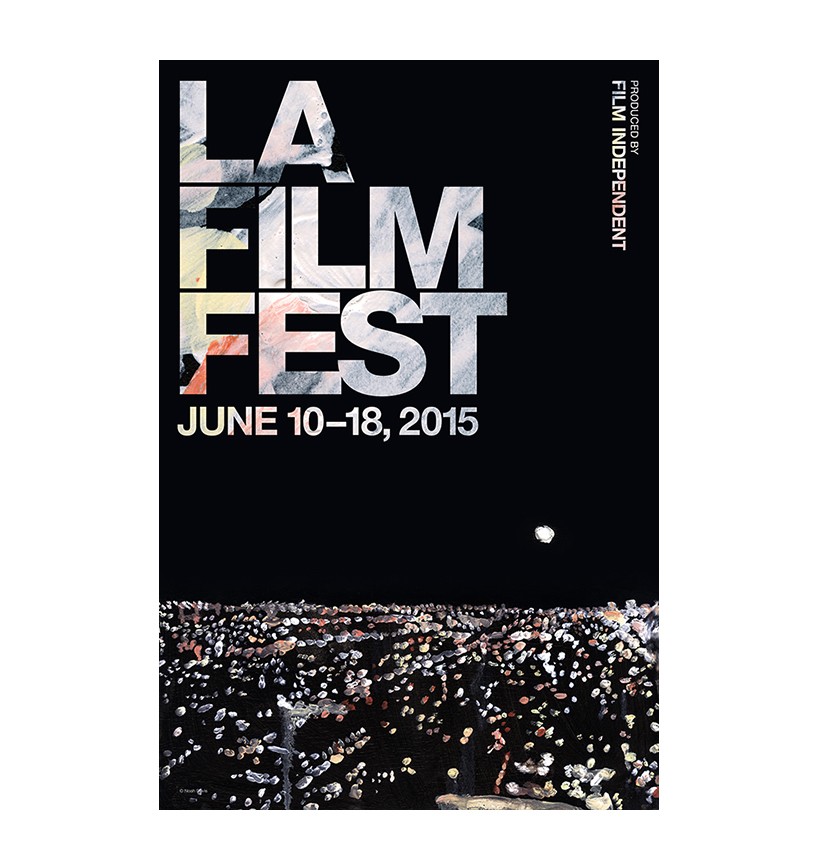 to create this years identity oberman and her team collaborated closely on the festival branding with stephanie allain, the director of the los angeles film festival, and maggie moe, director of marketing at film independent.

pentagram produced the official festival poster and a trailer to be shown before screenings. the team also worked with film independent to produce advertisements and the program brochure cover, street banners and other on-site graphics, and the festival app opening screen and website.

over the past two years, the festival has promoted itself with a series of official posters created in collaboration with a mix of iconic and up-and-coming LA-based artists and for this year’s festival, the organizers commissioned a work by noah davis. the painting pictures dots of color in a sea of black, evoking the lights of LA and the moon at night as seen from the hills around the city. 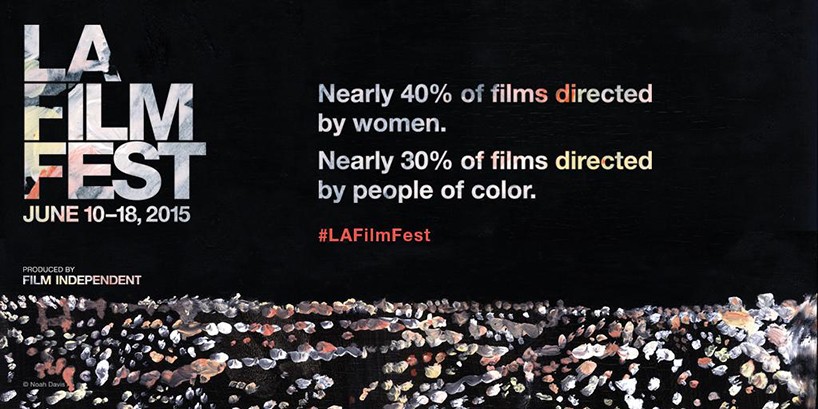 billboard adaptation of the poster

to integrate the festival branding into the painting, oberman and her team created a brushwork texture similar to davis’s and placed it into the letterforms of the wordmark, which is set in helvetica. the effect helps make the typography tonally consistent with davis’s painting and adds a splash of color to the moody LA noir. 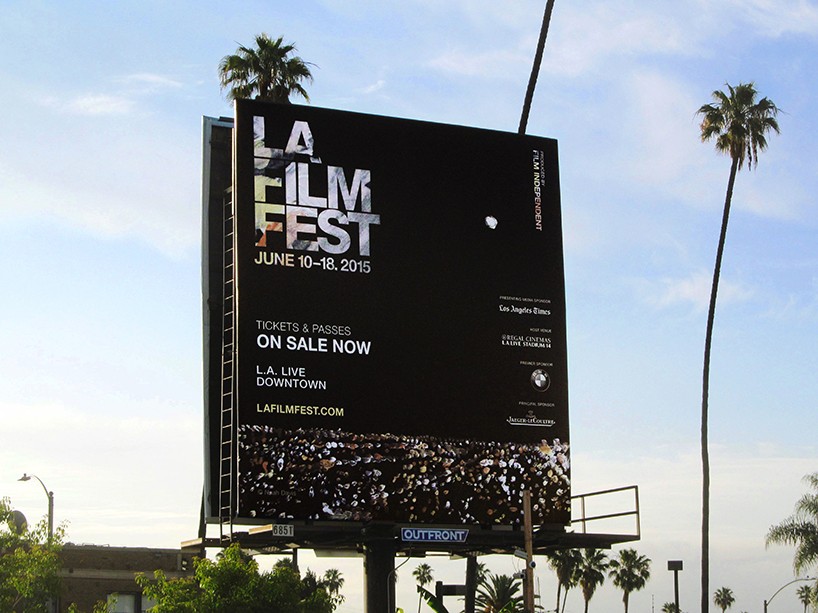 the festival trailer, created by pentagram, builds on the visual components of the poster, breaking them down to tell a story about the joy of filmmaking and the magical substance of creativity. oberman and her designers wanted to keep the trailer abstract and simple—just iconic, evocative images.

while the poster’s painting is not shown, the same color scheme and medium—that other magical substance, paint—is used to make a strong connection across the brand. in the trailer, traditional icons of film including a film slate, a boom mic, a camera and an actor appear dripping with paint, which splashes across the screen and ultimately reveals the logo. 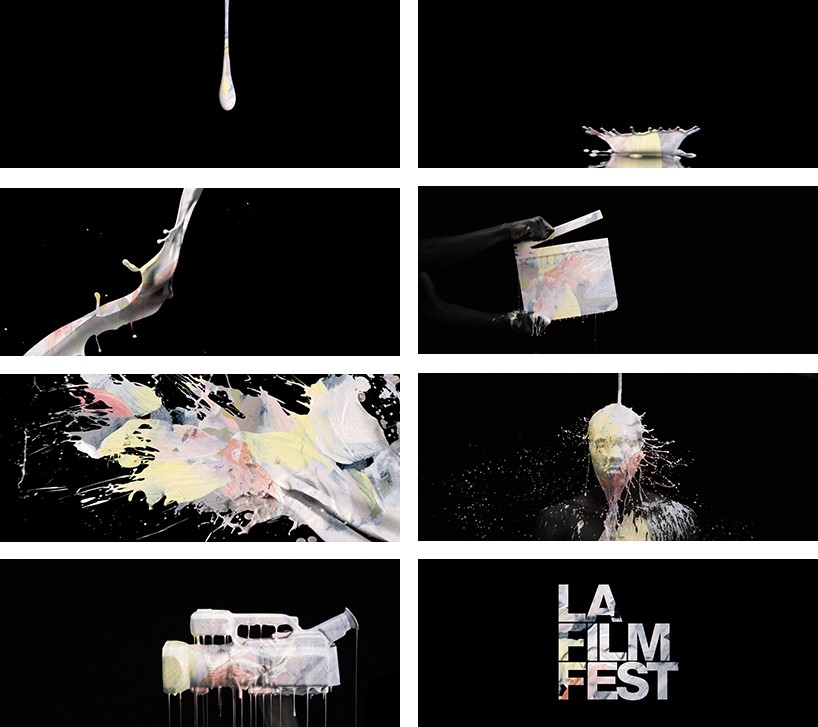 stills from the promotional trailer

to film the trailer, the designers hired ashton worthington, a photographer who frequently works with liquid to create abstract, conceptual photos. working with a full crew that included a stylist, director of photography and lighting assistants, the designers spent 12 fun hours splattering paint in a brooklyn studio. the objects were first spray-painted white and then doused with white paint to get them dripping. 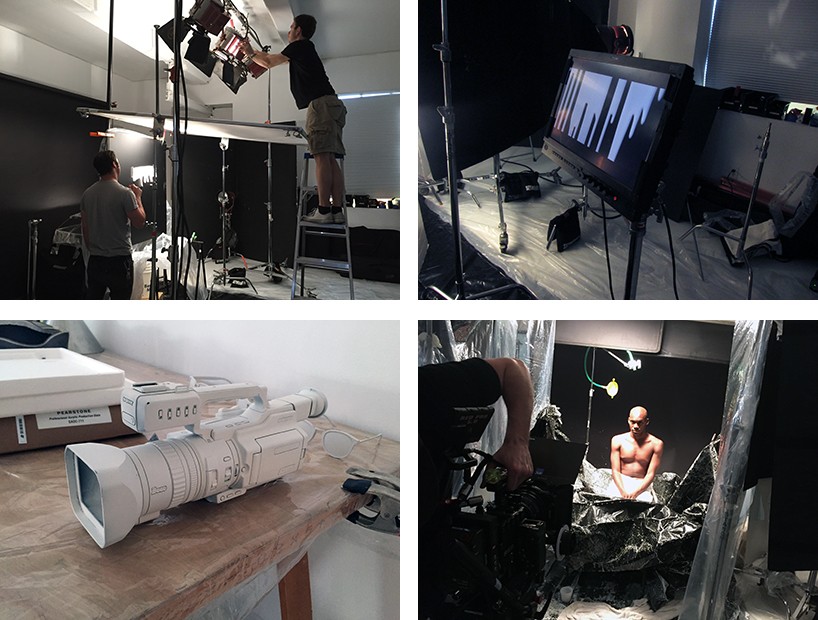 making of the promotional trailer at ashton worthington’s brooklyn studio

to get a variety of drips and drops, paint was thrown in the air, filled into a balloon that was exploded, and poured over an actor’s head. the textured color was added in post-production, and was animated further to have motion within the drips. the rich, colorful visuals are complemented by a bright musical score that was created by the pop composer stephen bray.