a door within a door.a small door leading into a big world…

german studio jjoo design (johannes marmon and johannes müller) has developed ‘minjjoo‘ children’s door which was realized in collaboration with door manufacturer holitsch. it is a standard interior door, with a small door integrated. via the smaller inset door, children are given a ‘grown-up’ feeling, accessing their own room and personal world at their own level. finished with a white chalk-board coating, the door’s surface can be painted or drawn on with chalk or water soluble markers which can easily be wiped off. 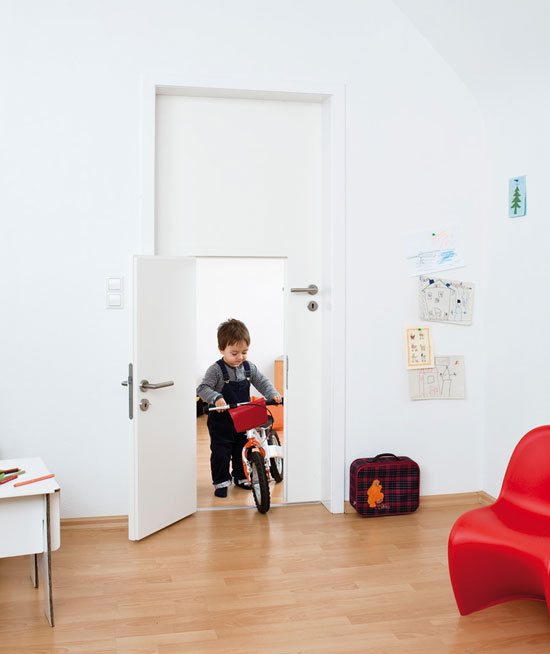 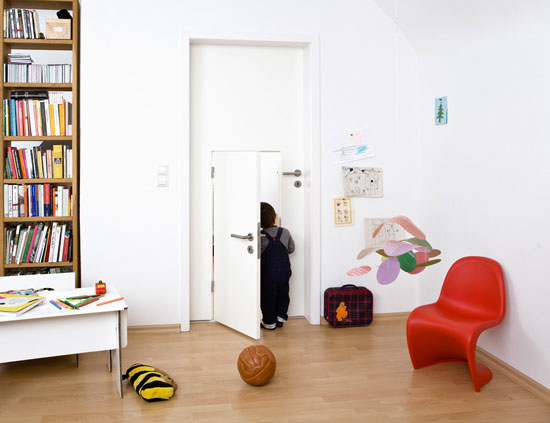 back in 2005, designboom hosted the ‘a door to paradise’ competition in which similar concepts were presented, with idea of building a smaller door within a larger one for children or animals. it’s interesting to see how related ideas are interpreted in different parts of the globe.

here’s a look at some of the entries which had similar intentions: 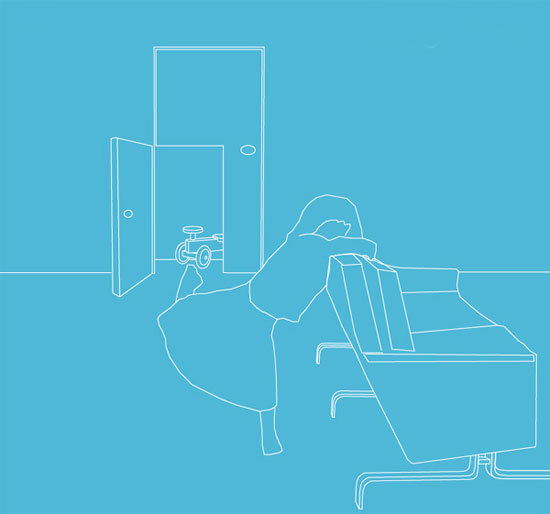 ‘kids door’ by nina tolstrup from the UK

this ‘two in one’ door not only fuctions as a normal door, but has a smaller door cut into it. kids love things that are their size. the ‘kids door’ can be plain or customized as say, a robot or elephant for example. 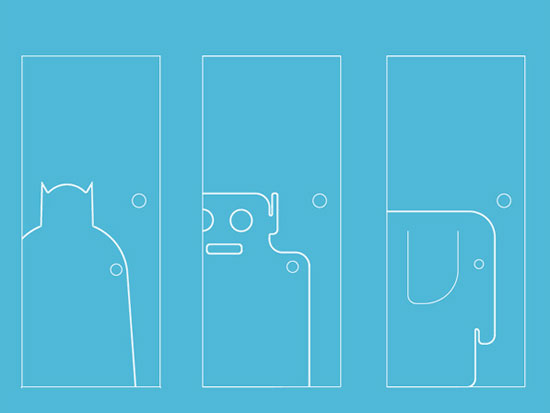 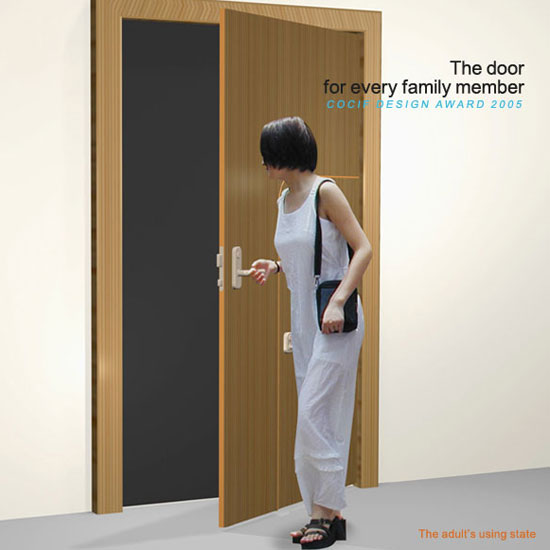 ‘the door for every family member’ by zhang jian

‘the door for every family member’ by zhang jian from china

‘if you want each family member to feel like they belong in the home, the door is the beginning! this door is designed according to a child’s height, with a leafed door for little ones built inside a conventional door. 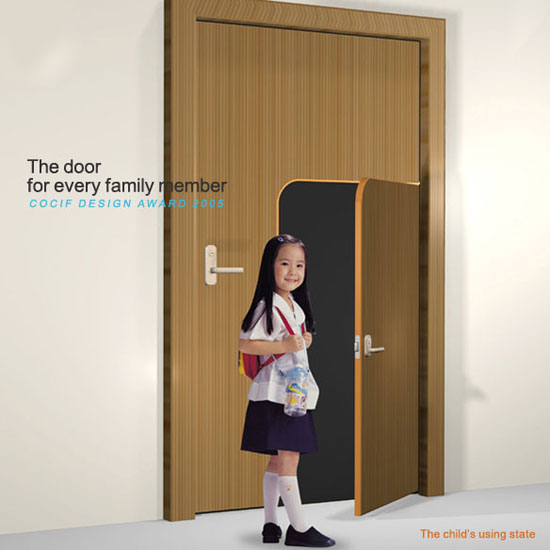 ‘the door for every family member’ by zhang jian 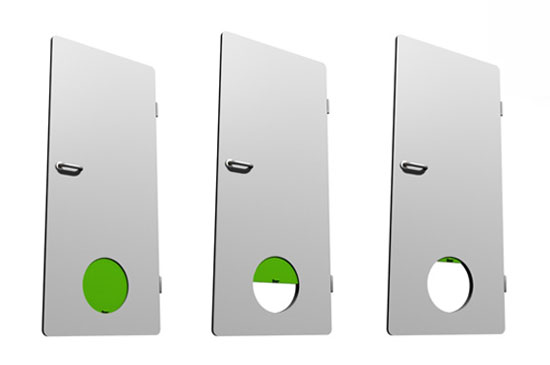 the concept is based on the idea of integrating a hole directly into the door to accomodate pets. small locks inside give one the choice to either leave the door open to allow your dog or cat to come into your room, or to close it for more privacy. 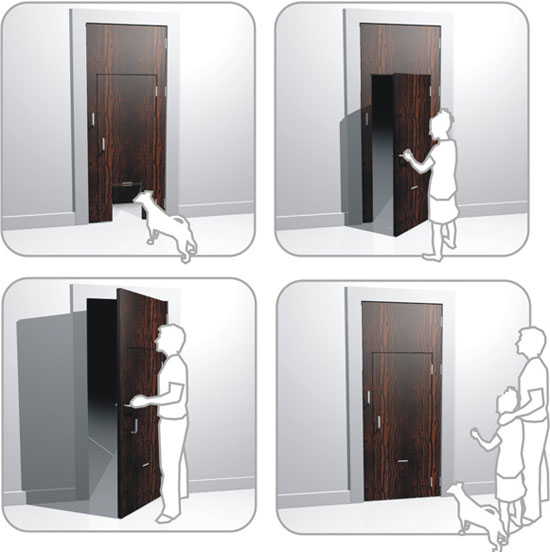 ‘family door’ by stefan van ouytsel, annelies geukens, cédric anheule, sven verhaert-pinkoliv from belgium ‘family door’ embraces all important users of a home. it includes a second, smaller door for children which is easier for them to open, and also a small pet hatch, which opens either way. 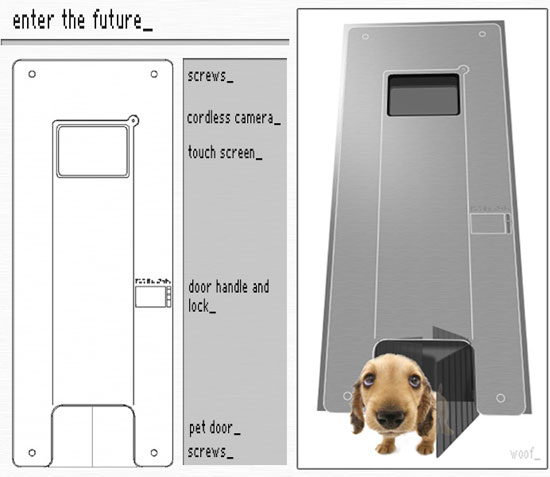 ‘enter the future’ by apostolos tsivalos

‘enter the future’ by apostolos tsivalos from greece the project is about a home interior door which is addressed to all people and combines technological innovation and minimalism. constructed from aluminum and steel, it has two touch scrrens and to vga cordless cameras adapted on each side. the door opens if the user pushes the hidden ‘little door’ handle. the user locks the door by lowering a switch with his / her thumb. a pet-door is built into the bottom of the door, made from transparent plastic or fiberglass.