our present day currencies of manufacturing are often centered around speed and cost, often at the expense of ‘responsible’ production. taking this into account, designer adam shephard proposes ‘arbor facere’ (tree factories), in which he challenges the culture of high-speed fabrication and consumption, by suggesting a ‘slow’ system of assembly.

trees have been used as a material in the grander network of our production economy as part of paper and furniture manufacturing, as well in the ship-building industry, for centuries. shephard’s aim is create a direct link between the woody perennials, and what they are capable of producing. the british designer has conceived a system in collaboration with engineer bill ballard, in which he outfits trees with technological devices that are used to harness the energy from their growth–the naturally occurring forces of pressure that develop over an extended period of time–to produce objects normally associated with high-speed and often ecologically irresponsible production, in this case injection moulding, changing our perception of a tree as a part of nature, into one that envisions them as industrial machines, essentially, the forest as factory. 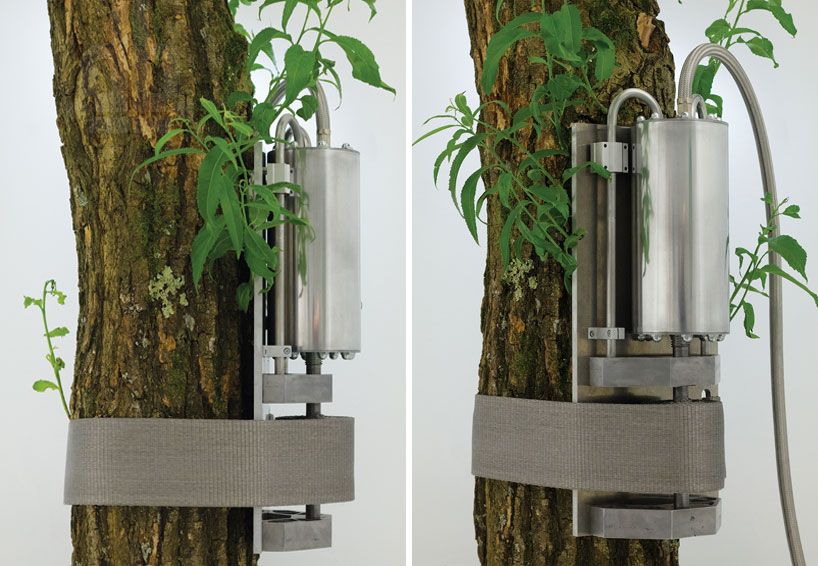 a band of webbing is wrapped around a tree trunk which is spooled on a central axel, drawing outwards as the tree grows compressing a piston

‘arbor facere’ explores two aspects:
the first is that of the trees and their now direct and obvious connection to their industrial role as mechanical and technological entities. the second is the forced consideration of extended timescales in the scheme of the manufacturing processes, wavering between being a critique of modernization, and a proposed alternative system of production.

the basis of shephard’s system draws on the gradual increase of pressure that is generated from the growing diameter of a tree trunk. each tree in shephard’s factory is surrounded by a band of webbing, spooled on a central axel that draws outwards as the tree grows, compressing a piston. his first iterations will use a cylinder with a capacity of 15cc and target pressure of 300bar, in which the collected energy will be used to injection mould two small plastic trees, each with the volume of 7.5cc. the resulting pieces will each have a range of inherent characteristics as a result of their creation of time, with the tree’s rate of growth engrained into the resulting objects as evidenced through the change in the plastic’s coloration over time. with this, the growth of the tree will be established into the objects through the change in the employed plastic material’s coloration over time. in doing so, shephard hopes to shed light on ways in which objects can be mass produced in the future; each one unique and old at the point of their materialization, intrinsically linked with histories of their place and period of development. with genetically modified trees becoming more commonplace (some reaching heights of 30 metres in approximately 5 and a half years), places ‘arbor facere’ offers a much more viable method of production, that rivals current ones in a more sustainable fashion. 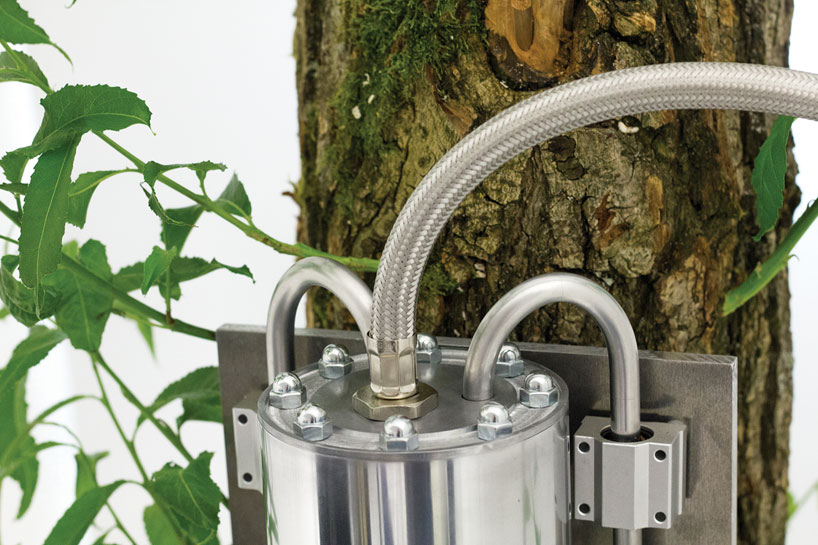 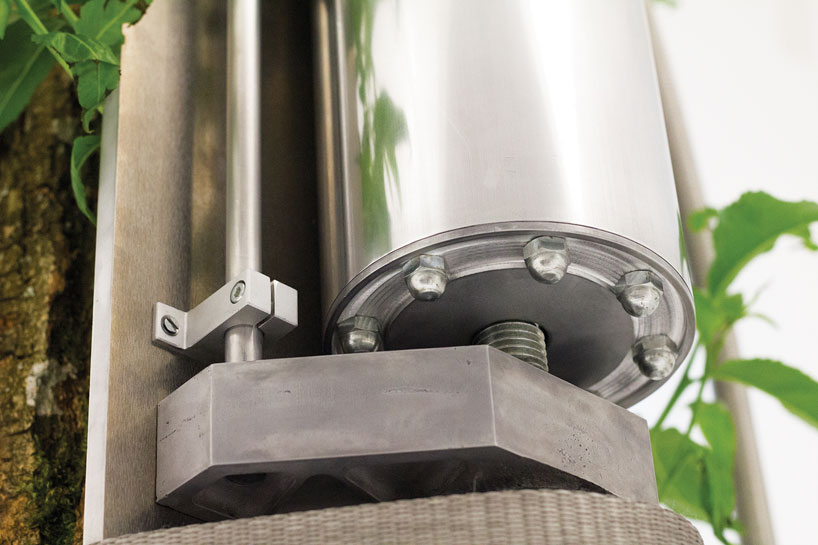 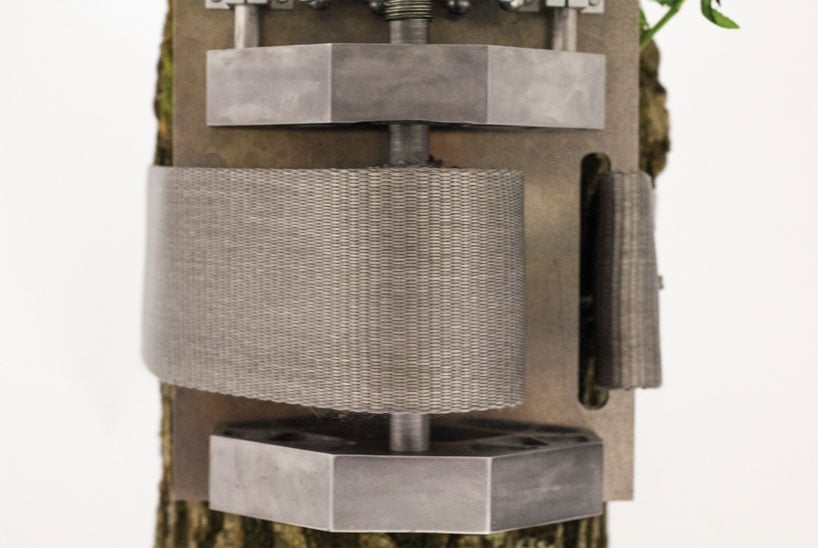 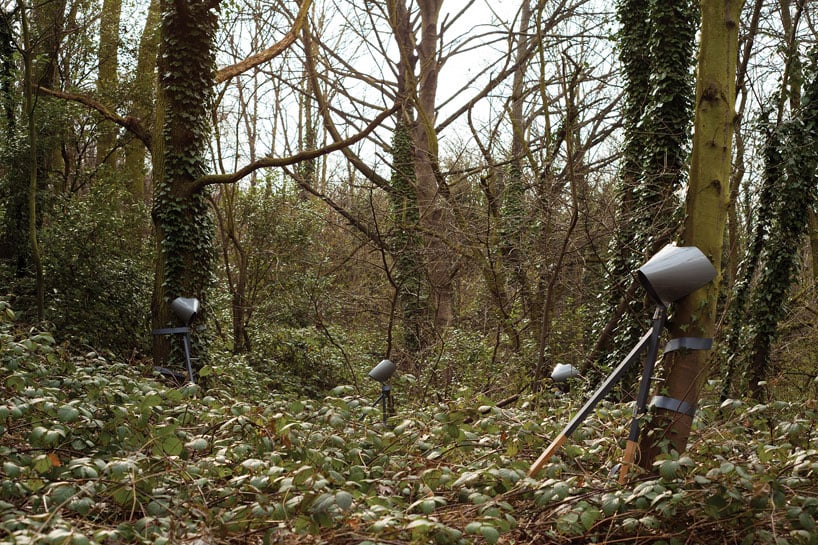 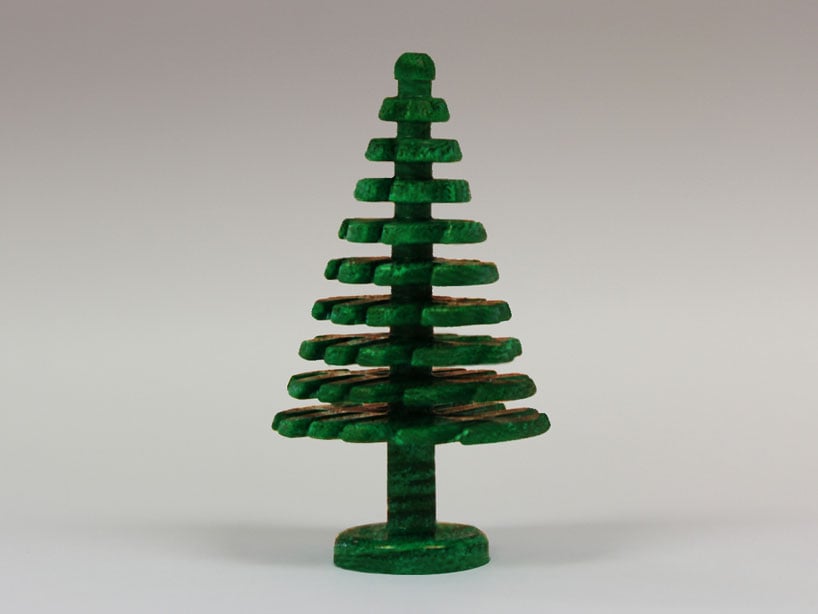 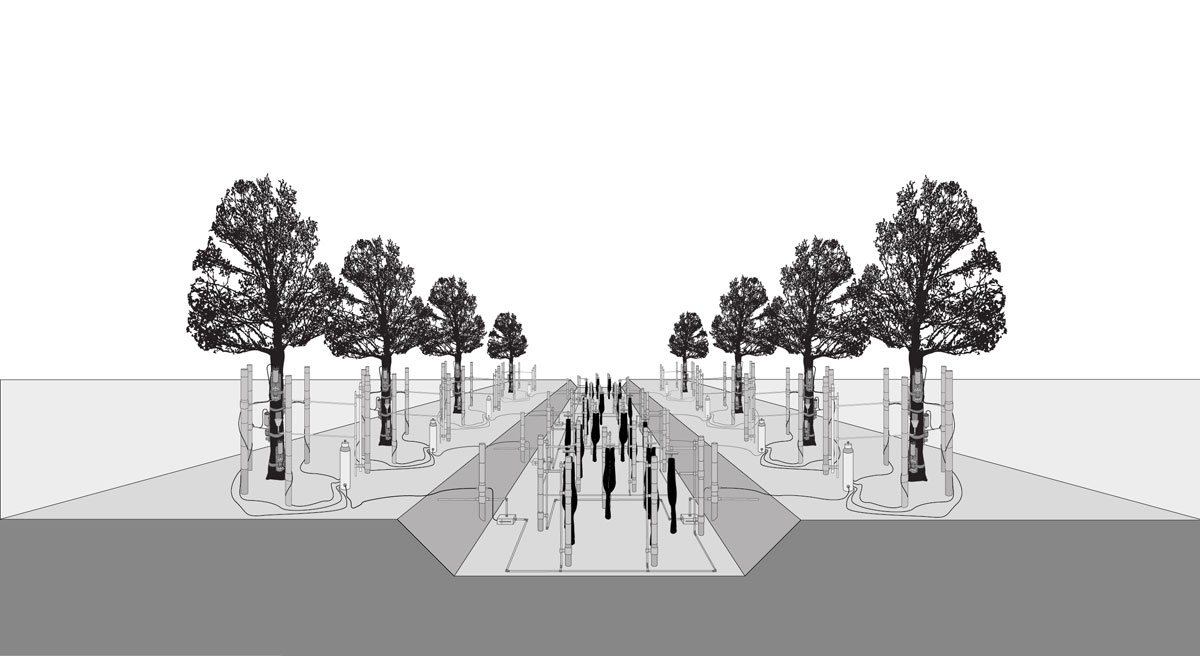 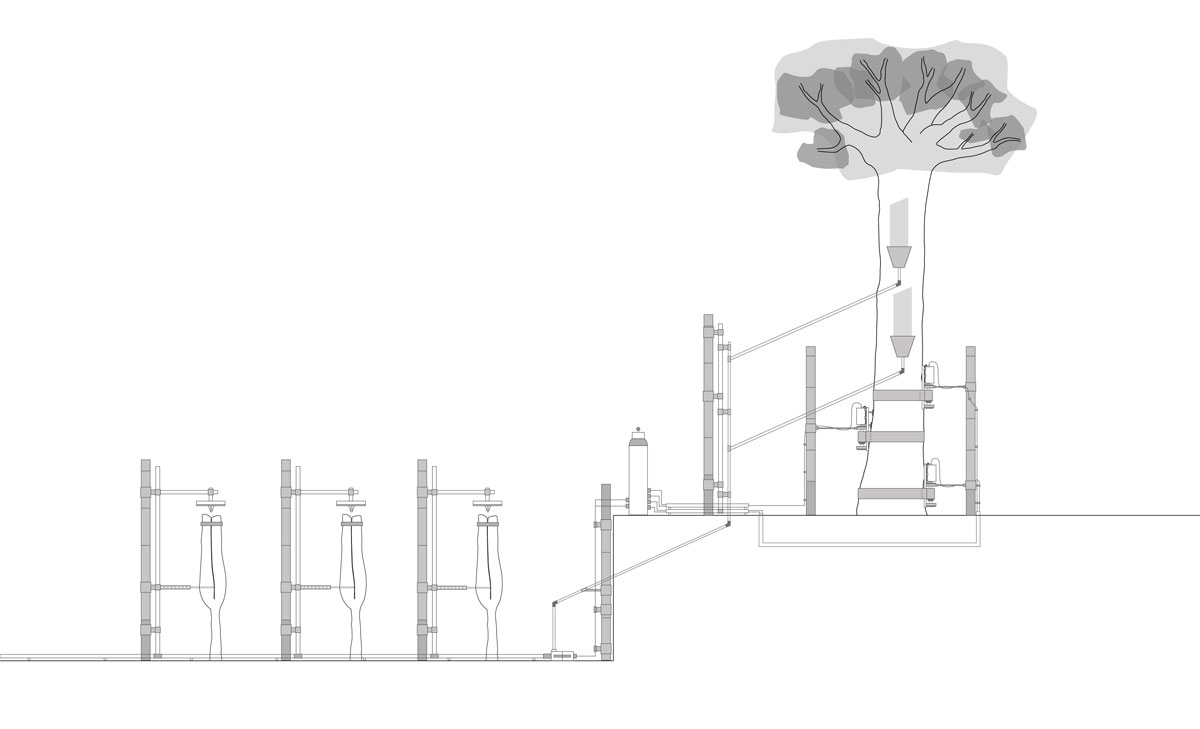 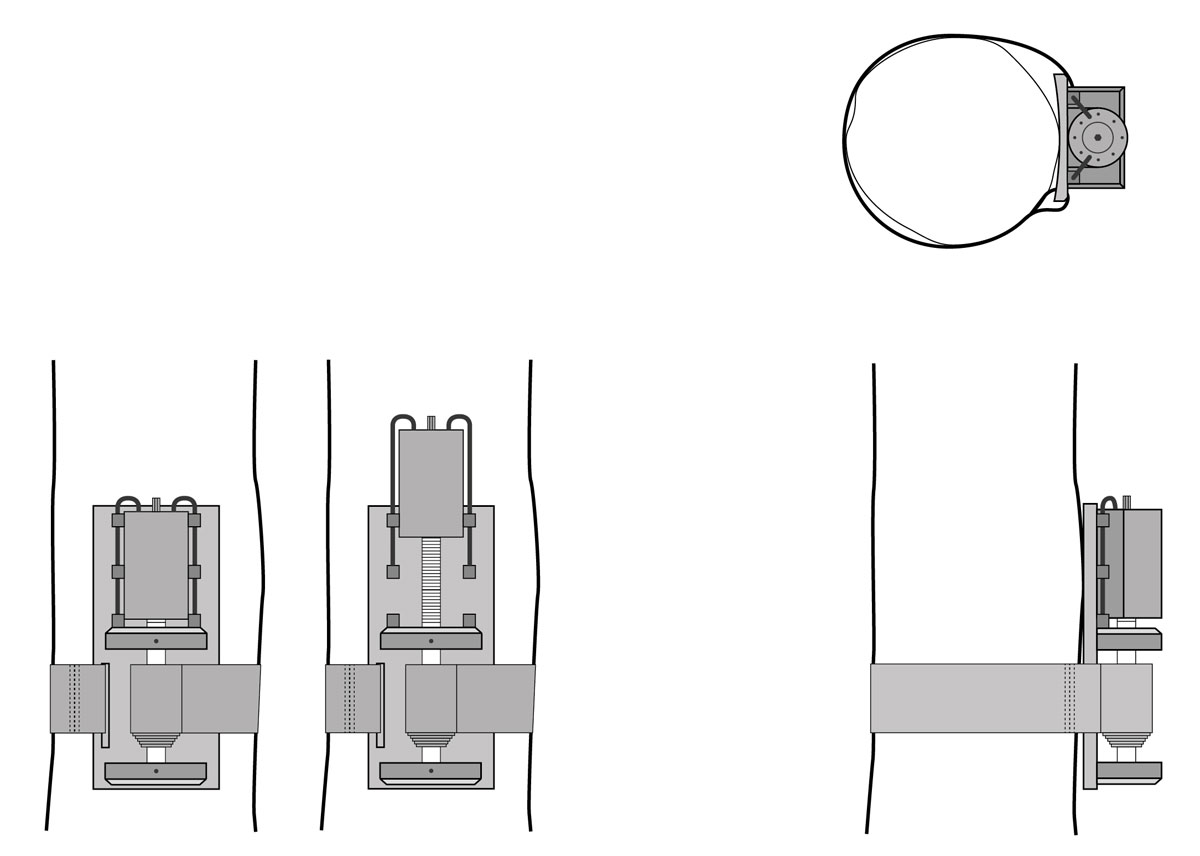 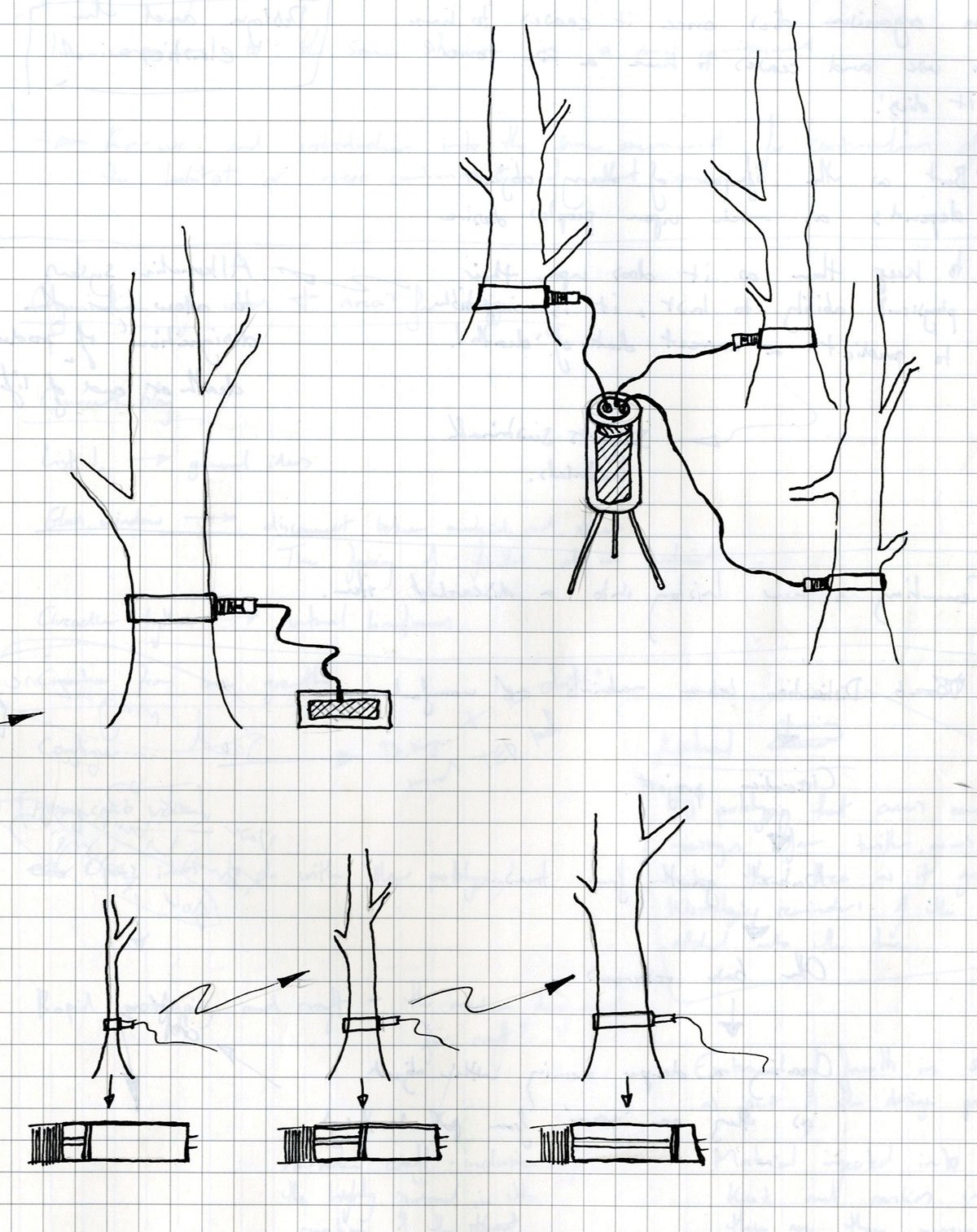