adi dassler started out as a baker, but his real passion was making sport shoes. the selection of images are shoes from adi’s first company, ‘gebruder dasher schuhfabrik’, currently known as adidas. fthe series includes track and field shoes, which range from sprint to long jump cleats from the 1920s — some of which were worn in gold medal performances at various olympic venues from the 1920-30’s.

above is adi dassler’s first sprint shoe, one of his first patents from the german trade mark office in 1925. the cleat was developed for sprinting and middle distance running up to 800m and has a bio-mechanically designed pitch of 60mm. the materials include an upper made of goatskin, an insole made of chrome splits, and the outsole and ‘spike plates’ made of vegetable tanned leather (vache leather). 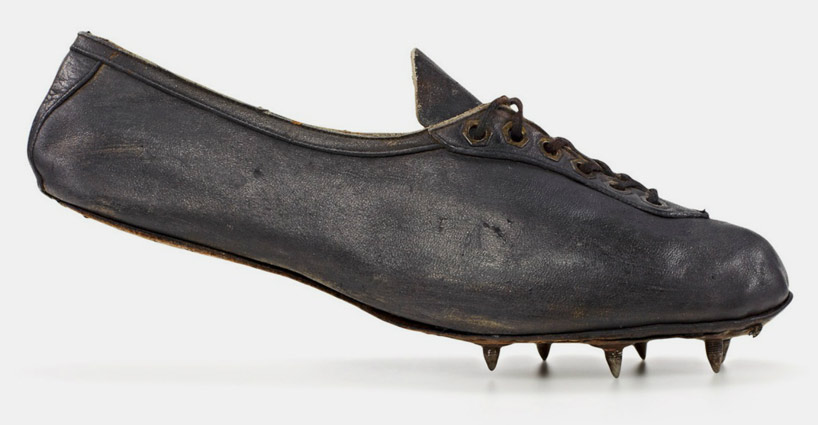 georg lammers won bronze in amsterdam in 1928 in the 100 m, and silver in the 4 x 100 m relay. what is special about this shoe is the use of one of the first ‘screw systems’ in athletics. six hand-wrought spikes, into which a thread was later cut, are pressed through the pre-punched outsole from the inside and then screwed in with a hexagonal, slightly concave steel disc. this attaches the spikes firmly to the outsole. the disadvantages are the weight of the metal parts and the difficult screwing process. the system was therefore only used for a limited period. the double-riveted metal plate supports the forefoot and distributes the spike pressure.

materials: the upper is made of black box calf. the 1.5 mm thick insole and the 3 mm thick outsole are made of vegetable tanned bottom leather (vache leather).

lina radke won the gold medal in the 800 m at the 1928 olympic games in amsterdam, setting the first officially registered world record time of 2:16.8 and winning the first gold medal in dassler shoes. adi dassler developed the shoe in close cooperation with jo (josef) waitzer, who was at that time the german national coach for athletics. the priority for the shoe was the lightest possible weight. the eyelet cut-out stretching all the way to the toe makes it possible to snugly fit the shoe to the foot by lacing. in order to save weight, the outsole is split extremely thin at 4 mm. the same is true of the 1.5 mm thick insole. a triple riveted metal plate stiffens the sole in the forefoot area and enables improved pressure distribution of the spikes.

materials: the upper is made of goatskin. the insole is made of chrome splits, and the outsole of vegetable tanned bottom leather(vache leather). 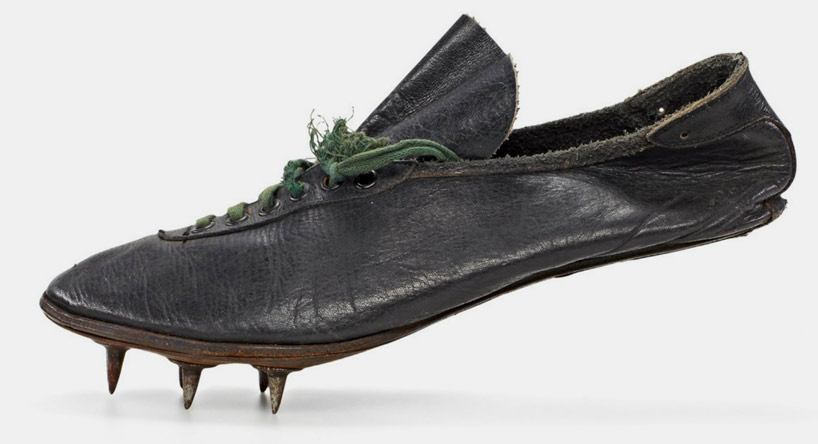 helene schmidt won the olympic bronze medal in the german 4 x 100 m relay team in amsterdam in 1928. she ran the second leg. the innovative plastic/synthetic overlay in the forefoot area stabilizes whilst distributing the spike pressure. the hand-wrought spikes are fixed in place with soft pressed-on metal discs.

materials: the upper is made of supple cow hide. insole and outsole are made of vegetable tanned bottom leather (vache leather). both the 15 mm spikes and the mounting discs are hand-wrought.

custom-made specialist shoe for hans woellke, gold medal winner in shot put at the 1936 olympic games in berlin. as the ring was on natural soil, six hand-wrought spikes were attached to the forefoot area. additional stability is provided in the metatarsus area by means of a broad leather facing and a stitched-in internal twill strip. the forefoot area is stiffened by a long, riveted-in steel plate.

materials: the upper and facings are made of cow hide and the back lining is split leather. the tongue is felt-lined and the forefoot is reinforced with a twill strip. insole, midsole and outsole are made of vegetable tanned bottom leather (vache leather). the heel lift is made of natural crepe. 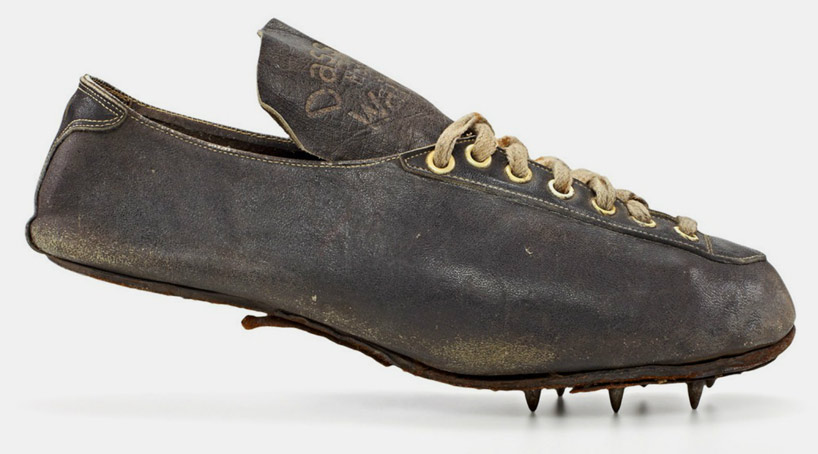 it was with these custom-made specialist shoes that german hammer thrower karl hein won gold at the 1936 olympic games in berlin. as throwing circles were on natural soil, six 8mm hand-wrought spikes were affixed in the forefoot area and three 8mm spikes in the heel area. forefoot and heel seat portion are stiffened with riveted metal plates on the bottom of the sole and a steel shank on the underside of the insole.

materials: the upper is made of supple cow hide, the lining at the heel seat of calf leather. the eyelets are brass. insole, outsole and heel lift are made of vegetable tanned bottom leather (vache leather). 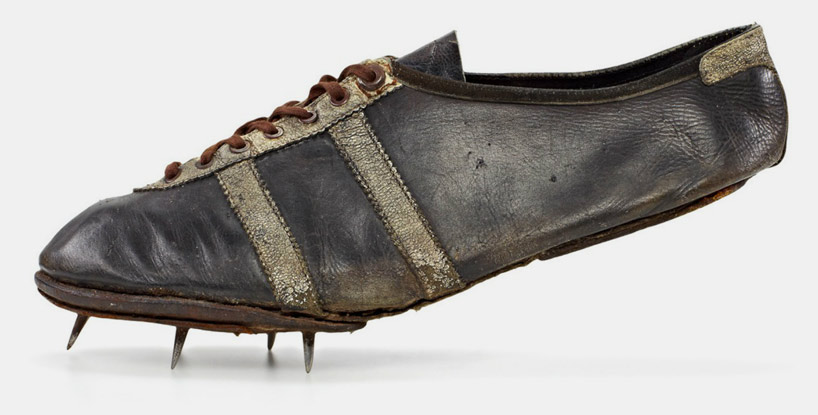 it was in this shoe, made especially for him, that four-time gold medal winner james cleveland (J.C. or jesse) owens won gold in the 200 m and the 4 x 100 m relay in berlin in 1936. to make the tread surface as wide as possible, the six thin spikes are inclined outwards. the spike lengths were graduated according to the athlete’s specifications, from 15 mm at the ball to 17 mm at the toe. an outsole made of chrome splits saves on weight and increases flexibility. no metal plate was added in the forefoot area. the small eyelets and the thin lace also serve to reduce the weight.

materials: the upper is made of specially tanned calf leather, and the facings of cow hide. the insole and spike plate are made of vegetable tanned bottom leather (vache leather). the outsole is made of chrome splits. the asymmetric heel lift is made of natural crepe. the spikes are hand-wrought. 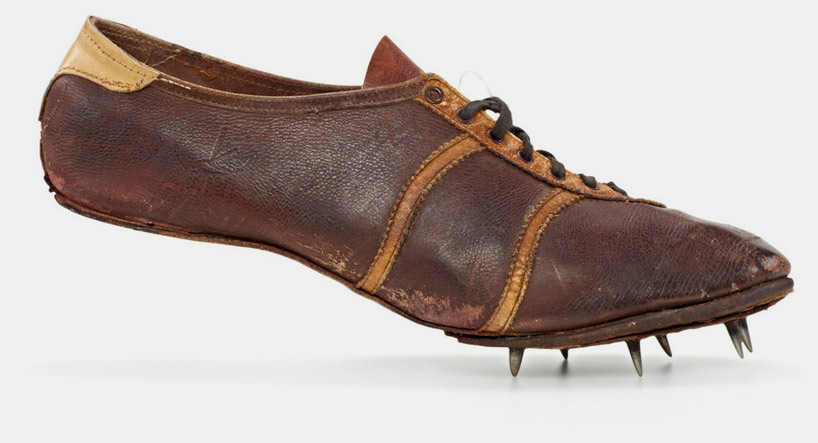 herbert schade notched up his greatest international success, winning bronze in the 5,000m at the 1952 olympic games in helsinki. he used this shoe in 1948. the shoe was consistent with pre-war standards. for a variety of reasons, it was not possible to implement improvements made possible by new research so soon after world war II. 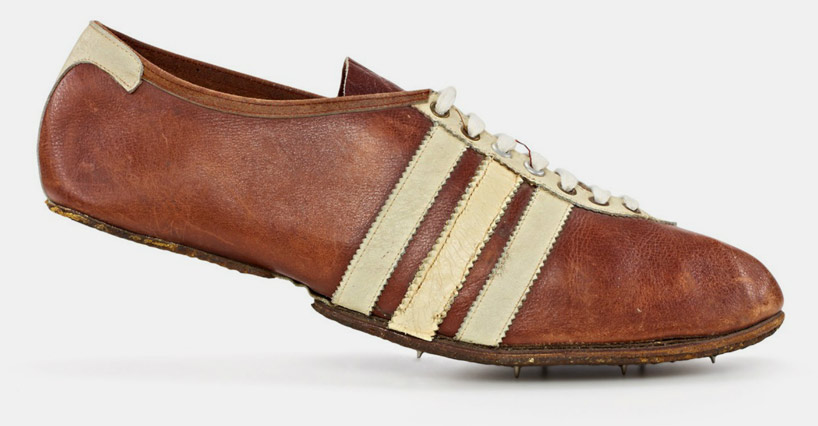 in the development phase of the ‘registered three stripes design’, adi dassler experimented with three, four, five and six stripes on the shoe in order to find the perfect look. for this shoe, a third stripe was added between the two existing stripes on a finished pre-war model.the short forefoot spikes and the cushioning natural crepe components make the shoe ideal for indoor sports halls.

cooper (corny) johnson, 1913-1946, won gold in the high jump at the 1936 olympic games in berlin. the shoe has high-quality 25mm spikes made of a special steel alloy on an extremely thin bottom plate. the spikes at the heel are set at an angle for secure tread / take-off for the ‘straddle style’.

materials: the upper is made of specially tanned elk leather, with facings made of box calf. insole, outsole and heel are made of vegetable tanned bottom leather (vache leather). spikes and metal plates on the sole are made of a special steel alloy.

arthur jonath’s bronze medal in the 100 m at the 1932 olympic games in los angeles was erroneously described for many years as the first olympic medal in dassler shoes. in 2008 it was established that the first gold medal in dassler shoes had already been won in amsterdam in 1928, by lina radke in the 800 m. to reduce weight, thin leather and narrow laces were used. the insole is only 1.5 mm thick, as is the outsole in the waist and heel seat area. in the spike area, the outsole and spike plate are each 3 mm thick. the asymmetric form of the spike plate and the arrangement of the spikes with one on the toe were innovative.

materials: the upper and facings are made of thin calf leather. the insole is made of chrome splits. the outsole and sole plate are made of vegetable tanned bottom leather (vache leather). the heel lift is made of natural crepe and the spikes are hand-wrought. 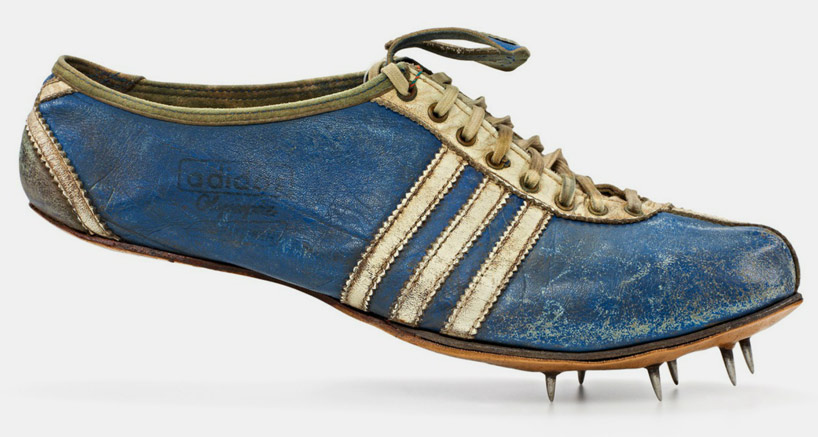 from emil zatopek to armin hary – from grete waitz to bob beamon, these athletes set world records in 1953 and onwards, all wearing progressive iterations of the sporting shoes adi dassler once produced. in 1953, emil zátopek won the 10,000 m in stara boleslav wearing this shoe, in a record-breaking time of 29:01.6 minutes. by using kangaroo rather than bottom leather, the weight of the shoe was reduced and the comfort was increased. the model was also delivered with six spikes, and optional screw-in spikes.

materials: the upper is made of kangaroo leather. the insole is made of vegetable tanned bottom leather (vache leather). the spike plate is made of chrome tanned split leather. the outsole is cut from a 2 mm rubber plate with a wave tread. 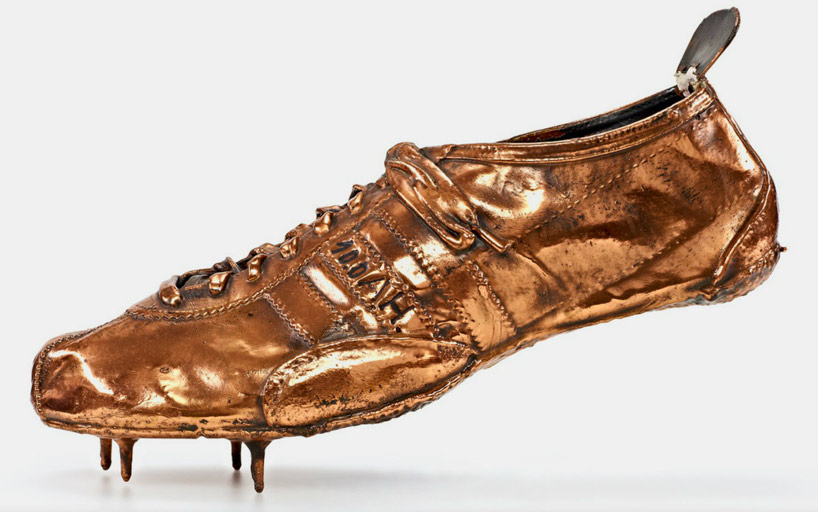 armin hary set a world record in these shoes, running 100 m in 10.0 seconds on june 21, 1960. he ran 10.0 seconds twice in a row. after the first world record was disallowed due to an alleged false start, he ran the same time 35 minutes later, on which occasion the world record was recognized. improvements were the lighter weight, the heel counter stiffener, the pre-fabricated nylon spike plate with integrated thread inserts and the foam heel pad.

materials: the upper is made of kangaroo leather. the inlay sole is made of textile sheet material which is padded with latex foam. the insole is made of vegetable tanned bottom leather and the spike plate of polyamide 6 (nylon). the outsole is made of profiled compact rubber, the heel-shank padding of foam. the thread inserts are made of aluminum and the screw-in studs of granite steel. 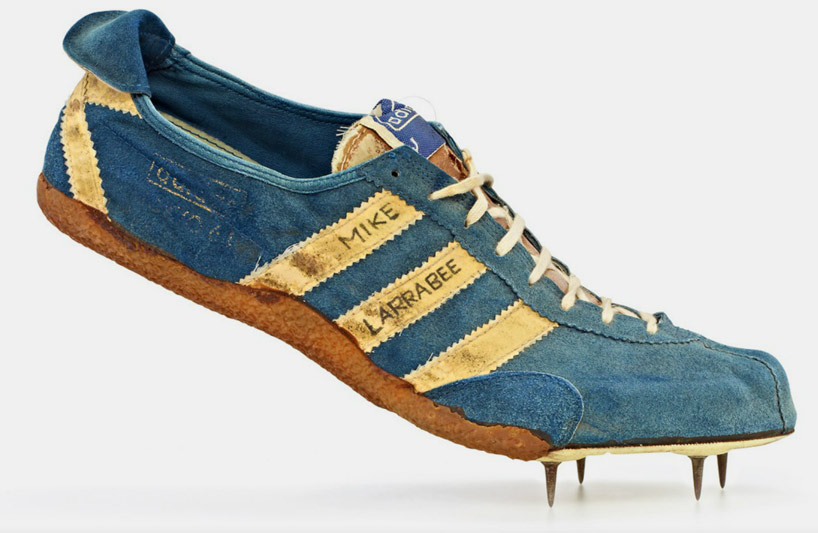 american michael (mike) denny larrabee wore this shoe at the 1964 olympic games in tokyo. he won the gold medal in the 400 m with a time of 45.1 seconds. larrabee also made a very successful start for the usa in the 4×400 m relay. the americans won gold with a new world record time of 3:00.7.the pre-fabricated spike plate features ergonomically positioned spikes and transverse grooves for improved flexibility. the lateral side of the foot is supported by an integrated rigid foam rubber component. 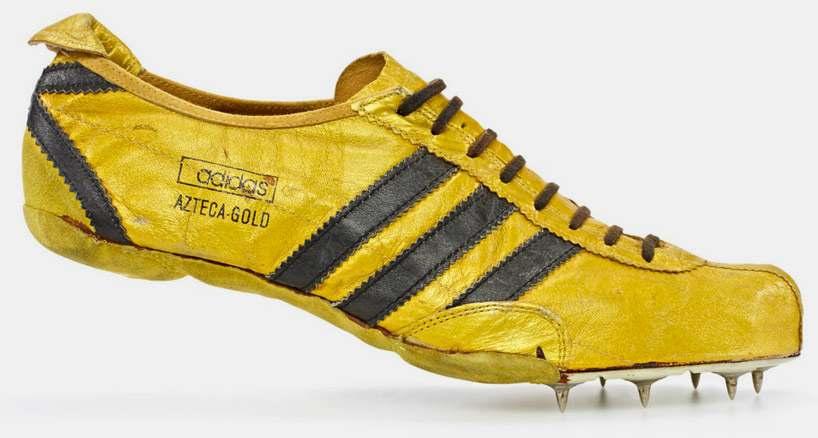 it was wearing this shoe that american james ray (jim) hines won gold in the 100 m at the 1968 olympic games in mexico city. the new world record time of 9.95 seconds was recorded electronically for the first time. hines also won olympic gold in the usa’s victory in the 4×100 m relay with another world record time of 38.2 seconds. the azteka gold is a further development based on the tokyo 64. the upper construction and spike plate were optimised and the 3/4 sole completely padded. at the athlete’s request, the shoe was equipped with 6 spikes. 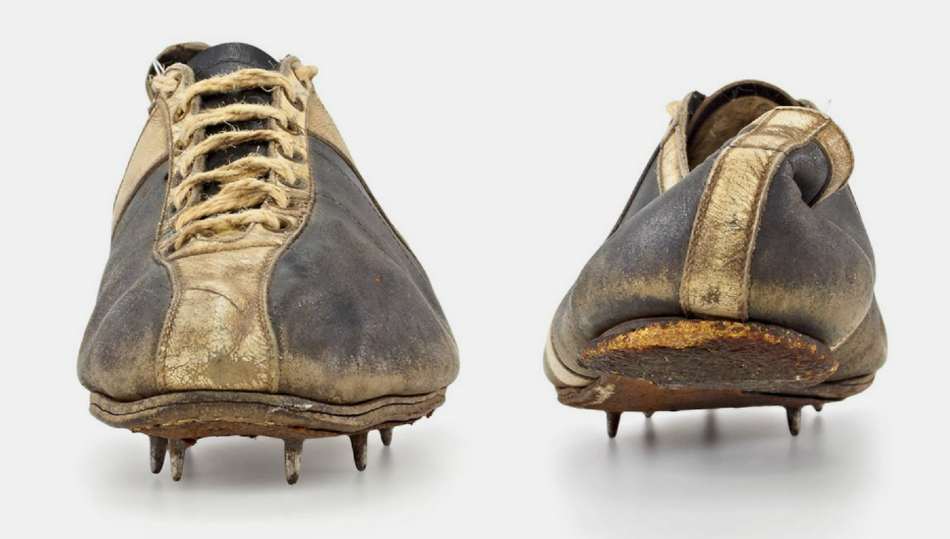 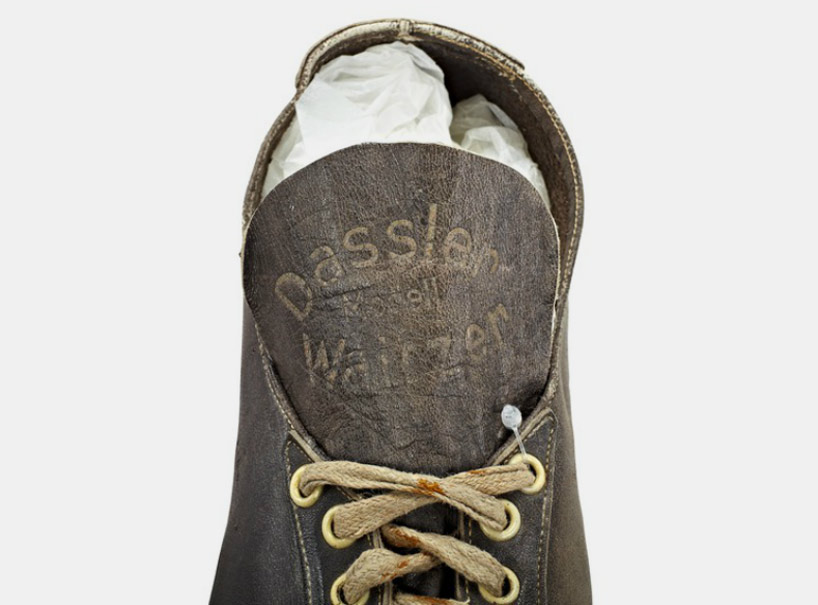 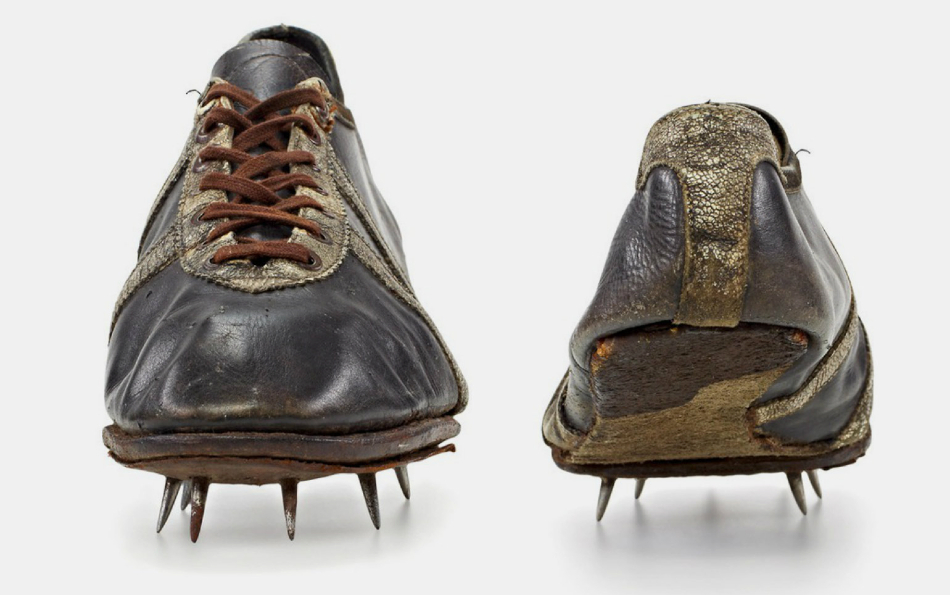 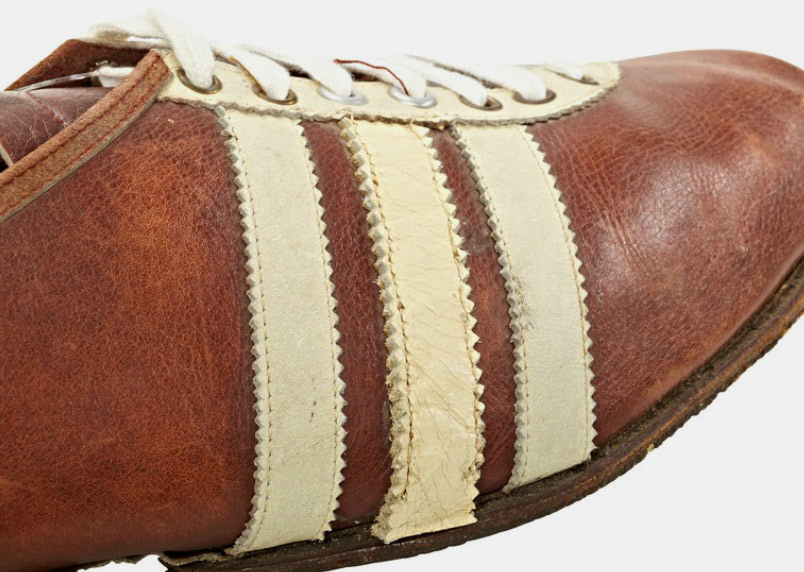 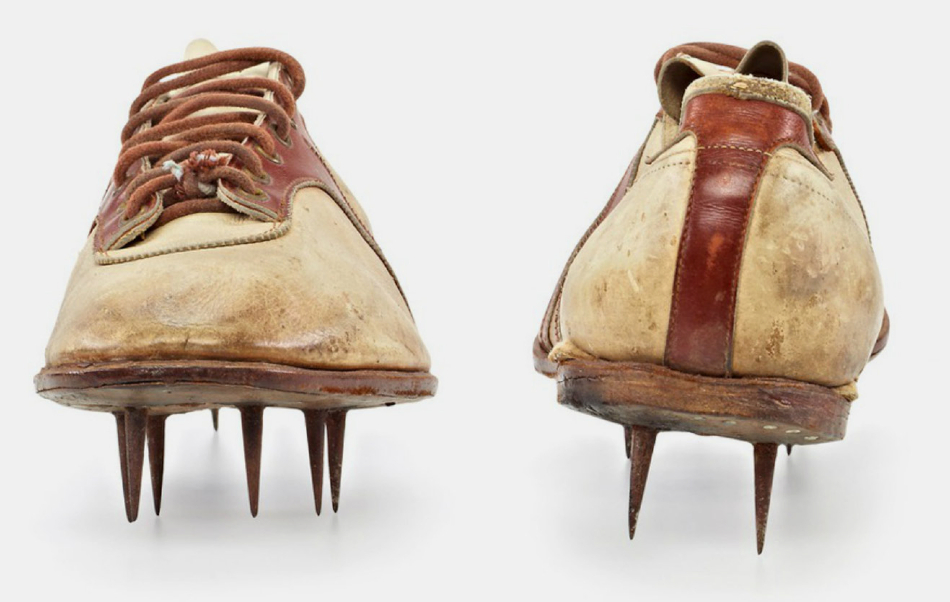 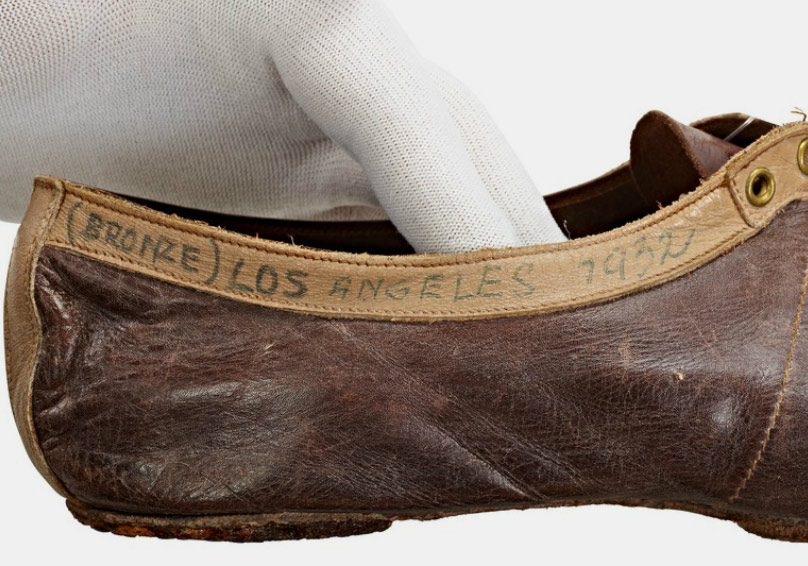 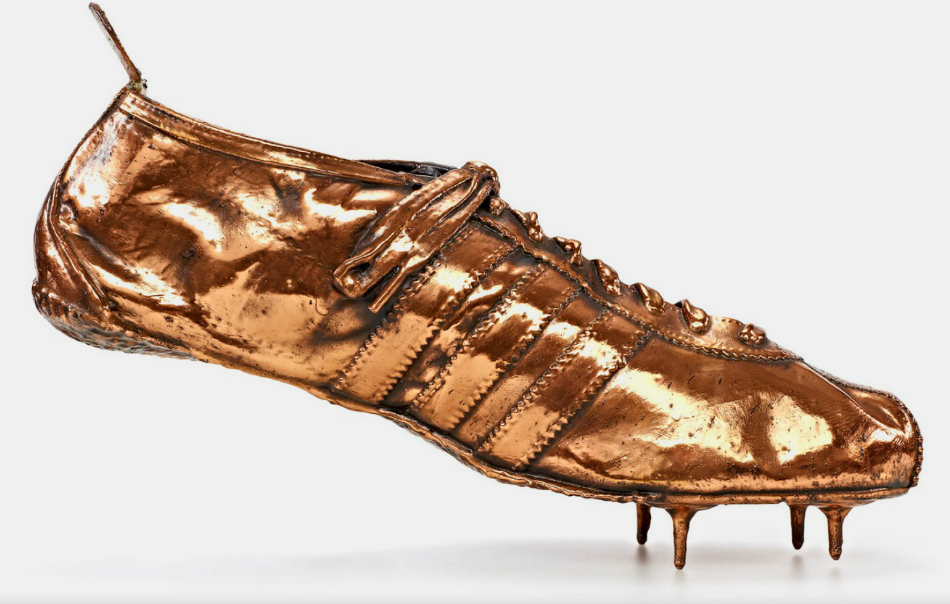