presented during 2019’s edition of dutch design week, ‘affair with earth’ brought together ukrainian designers to explore new sustainable materials. the works were showcased on surfaces completely covered by a green living ecosystem and investigated different sources of materials, local production, sustainability and ultimately, the relationship between man and nature. the five projects comprised of ‘terra’ by yuriy ryntovt, ‘re-leaf paper’ by valentyn frechka, ‘hemp fur’ by devohome, ‘growing fur’ by dasha tsapenko and ‘atomik vodka’ by the chernobyl spirit company. the idea of the ‘terra’ surface by yuriy ryntovt is an anthem to earth.

in his ‘terra’ project, yuriy ryntovt elevates and rotates the horizontal surface of the soil into a vertical position. the designer has created the original surface with chernozem in its base to use it on façades of his furniture collection. the idea of the project is an anthem to earth. 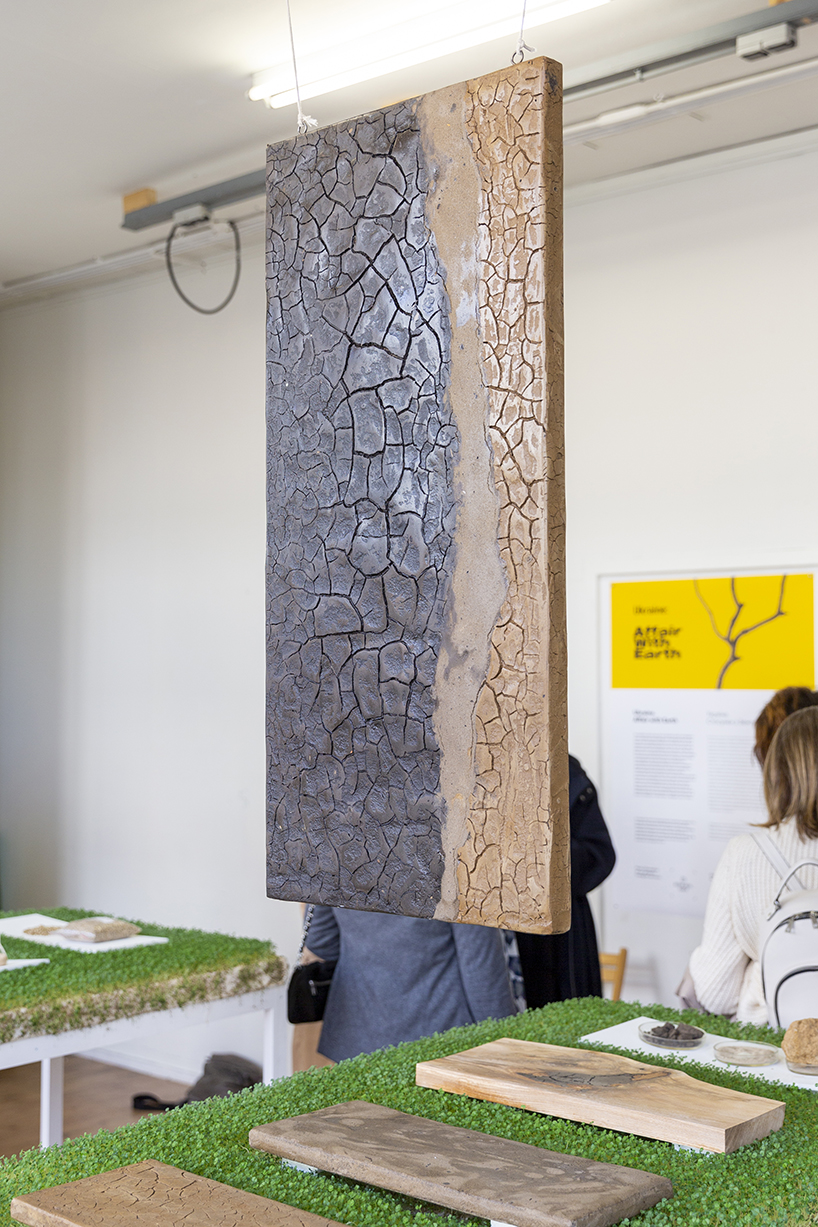 yuriy ryntovt produces his material ‘terra’ from chernozem, sand, and clay. the designer uses it as a furniture surface for his collection.

ryntovt says, “we feel happiness when working with soil. same primitive happiness, which locals who were working on the land felt when they saw its ability to revive year after year. they appreciated its living miracle, from the first sprouts to a plentiful harvest. we feel almost physical pain from the way people treat nature with disrespect and disregard. people no longer treat soil as a shrine unlike they used to before industrial age”. 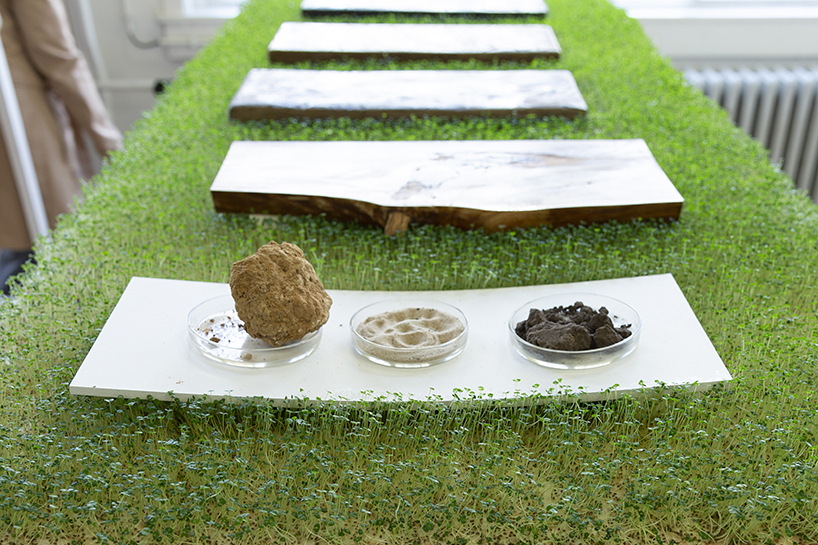 soil, sand and clay are the material from which yuriy ryntovt produce his composite material ‘terra’ which can be used on furniture façades

‘re-leaf paper’ by valentyn frechka aims to offer a decent alternative to the traditional paper made from wood as well as to solve the problem of fallen leaves in cities. despite digitalization in all life aspects, world’s paper consumption is increasing every year. lots of companies and people have recently switched to paper package instead of plastic to perceive themselves more eco friendly. it is a wrong understanding of a sustainable growth and quite a dangerous approach, because mostly paper in the world is made from wood, and forests cannot recover so fast. we need to find an alternative source of cellulose and it can be fallen leaves. 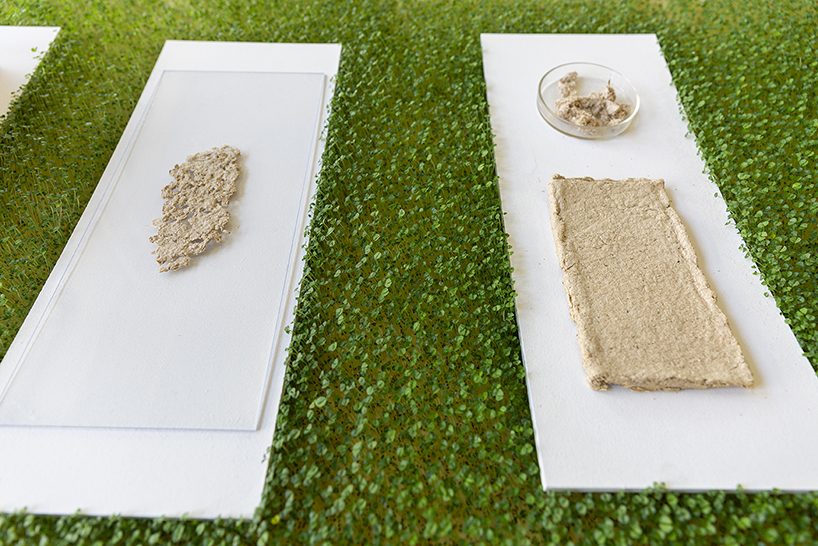 valentyn frechka invented the method of how to get cellulose from fallen leaves and launched re-leaf paper.

there is a fall period in all geographical regions with temperate climate. the problem of fallen leaves is solved differently in different cities. in kiev, for instance, city utilities collect all leaves from streets and parks and just remove them to dumpsites. sometimes caretakers rake up and burn fallen leaves. it pollutes the air and causes harm to human health and environment. with re-leaf technology fallen leaves could become not garbage but a valuable resource. 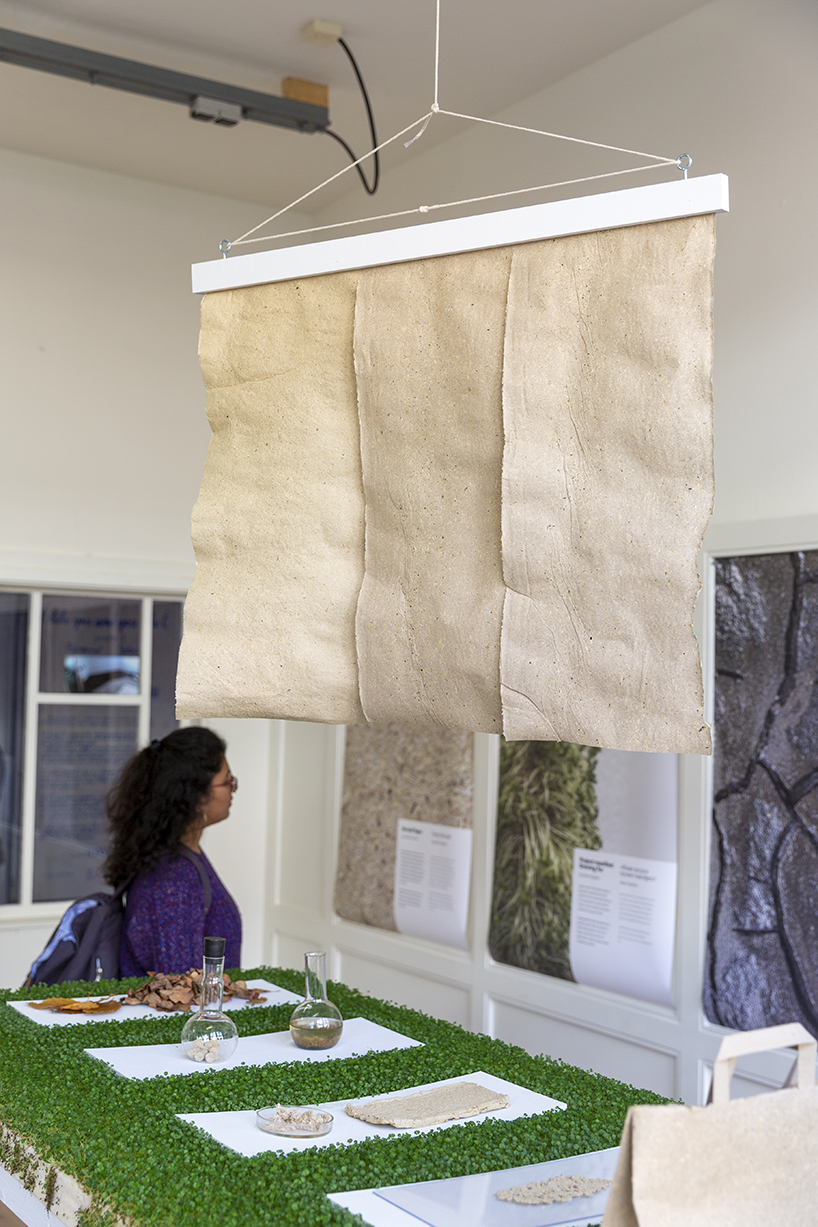 re-leaf paper made of fallen leaves.

the hemp plant has some unique qualities. neither pesticide nor herbicide is needed for it to be planted. hemp is double cropping and it demands 75% less water than cotton and absorbs four times more CO2 than most trees. 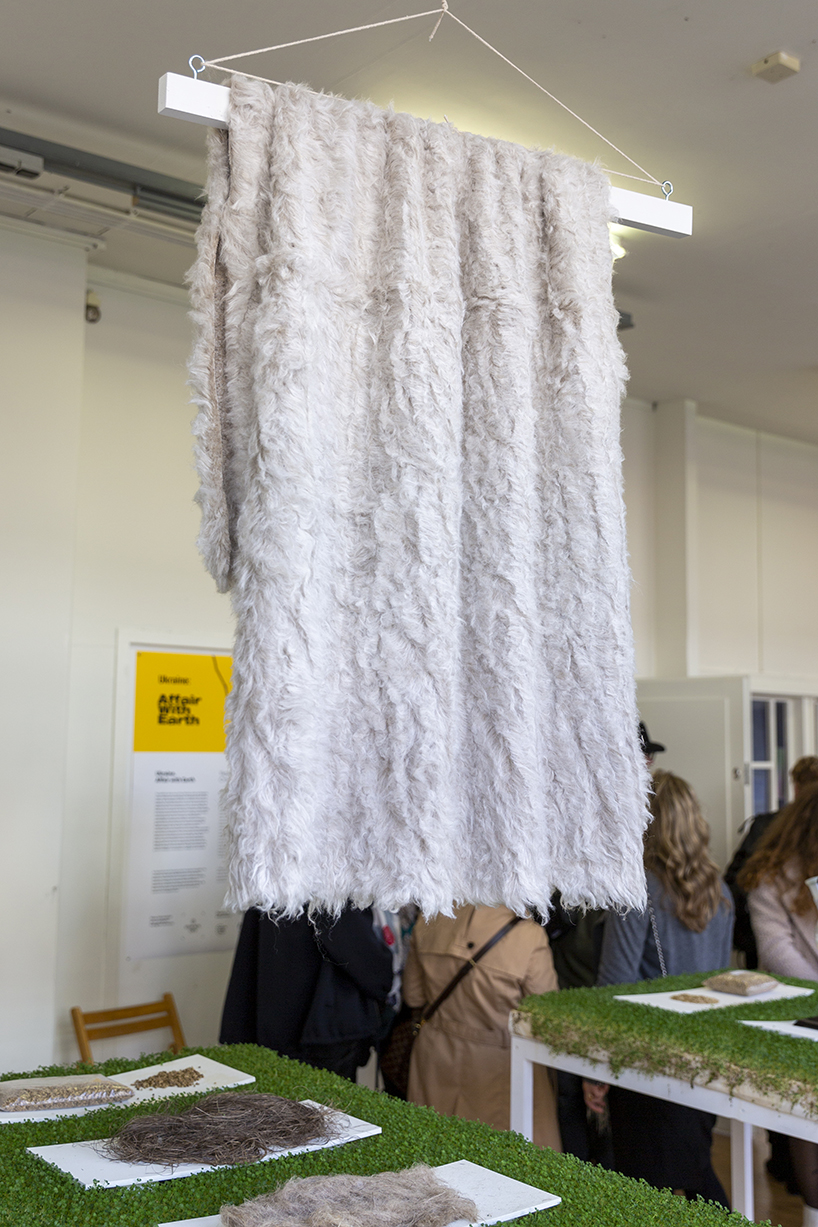 hemp fur by devohome is a vegan alternative for animal fur. it is smooth to the touch, natural, hypoallergenic, warm and tough material.

hemp fur by devohome is produced from hemp fibre of plants which were grown in pristine area in poltava oblast. hemp fur is smooth to the touch, natural, hypoallergenic, warm and tough material. no animal has to be killed for its production. also, hemp fur is not a potential source of microplastics in contrast with faux fur. 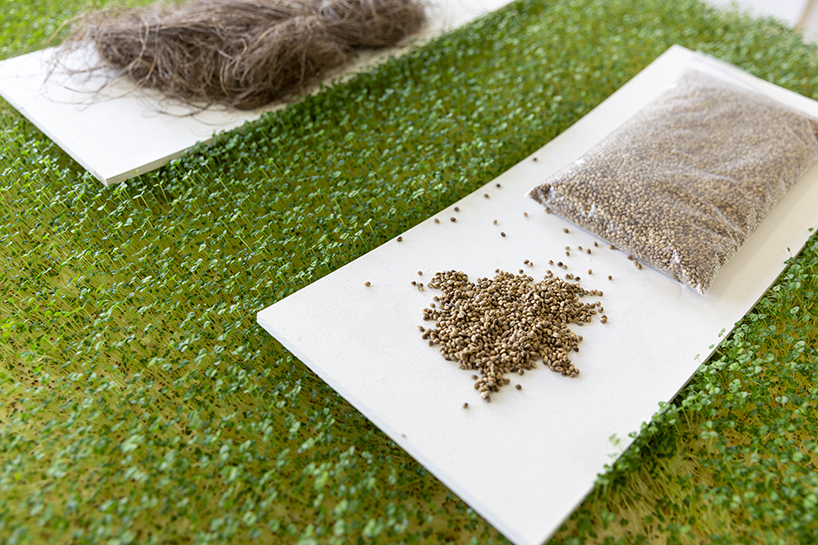 neither pesticide nor herbicide is needed for the planted hemp. it is double cropping and it demands 75% less water than cotton and absorbs four times more CO2

dasha tsapenko created live fur from sprouted chia seeds. the idea of the project is to rethink the place of clothes in our lives and to change our ways of interaction with it. the designer offers us a totally new approach instead of thoughtless consumption. imagine a raincoat or a dress which you plant as a living creature, you take care of it and walk it outside when it rains in order to keep it living. such a new concept questions a common position of humans as a center of ecosystem and provokes to reconsider their new place in the world. the material created on the base of chia roots and sprouts is not a ready product. currently dasha develops her project and tests characteristics and possible applications of the growing fur. 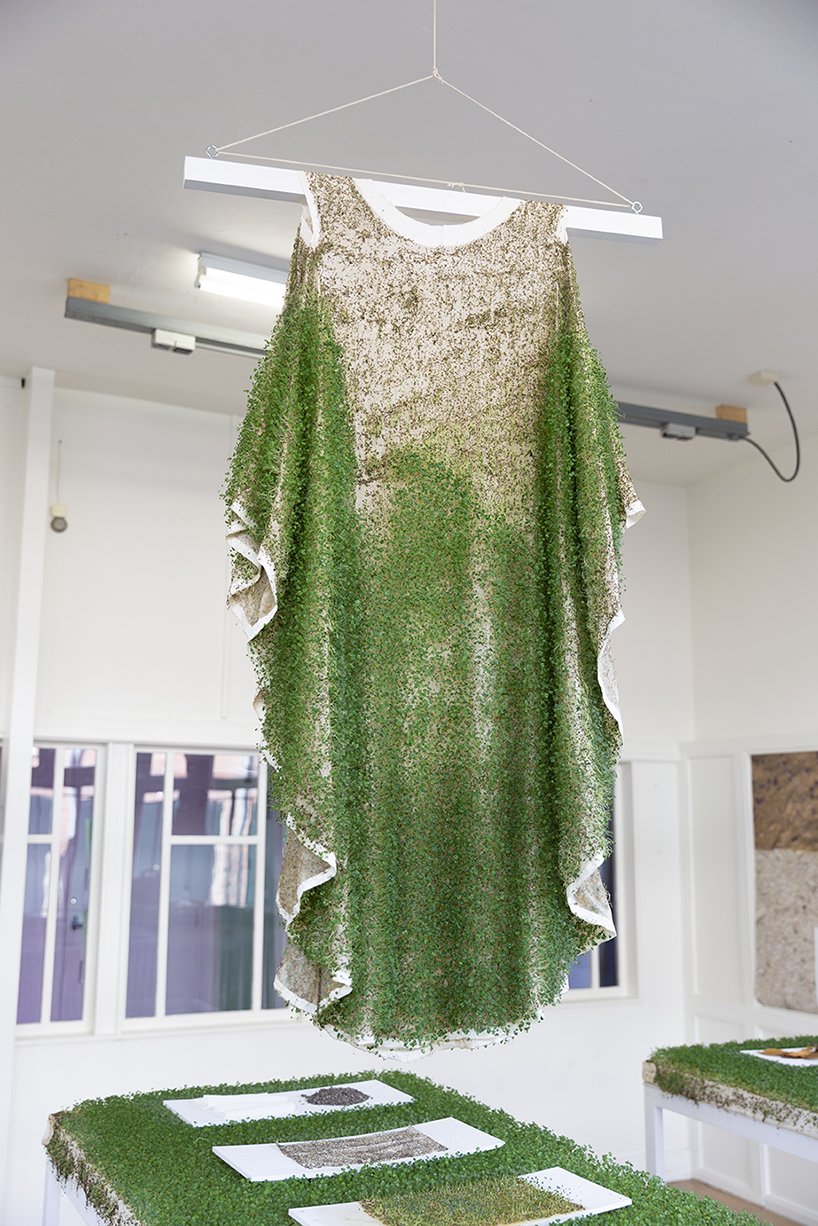 the idea of growing fur is to let people plant clothes as living creatures. you take care of your dress and walk it outside when it rains in order to keep it living.

in the atomik vodka project a team of ukrainian and british scientists studied agricultural possibility in the zone of obligatory resettlement which became radioactive after the chernobyl nuclear disaster. a professor of environmental science at portsmouth university jim smith, a head of the radiometric laboratory at the ukrainian hydrometeorological institute and a chernobyl “liquidator” gennady laptev, a geologist and radiochemist currently completing his phd at the ukrainian hydrometeorological institute kyrylo korychensky work on atomik project in their spare time along with their science studies. 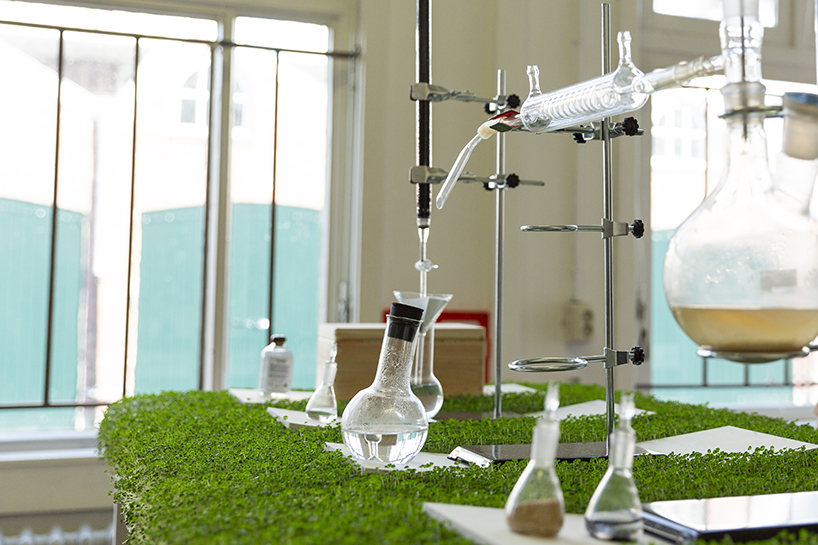 they used crops grown in the chernobyl zone and contaminated with radioactive strontium-90 to produce the experimental atomik vodka. as they found out distillation removed most impurities and radiation from the drink and made it safe for consumption. the project proves that more than thirty years after the chernobyl disaster land in the exclusion zone can now be used to produce crops which are safe to consume. atomik’s creators aim to involve locals who live in the zone of obligatory resettlement and suffer from unemployment. 75% of profits from atomik sales will go to support communities in the affected areas and wildlife conservation. 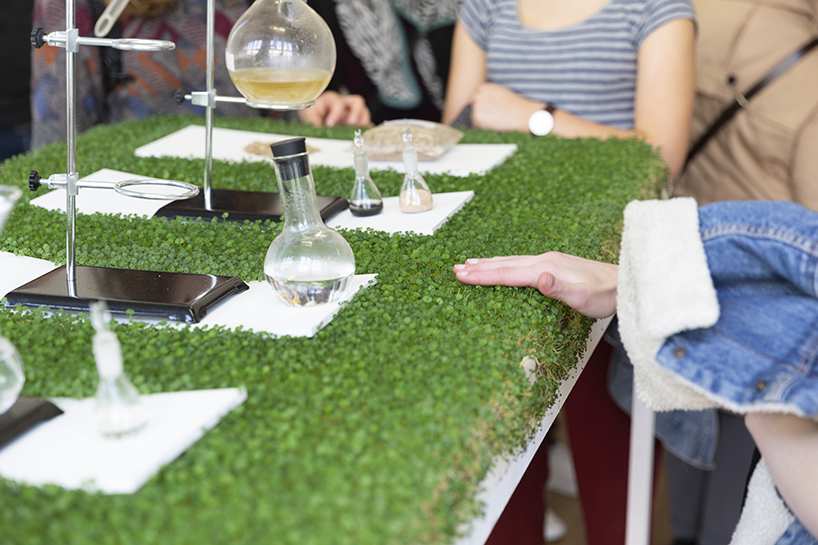 the distilled alcohol was diluted with mineral water from the deep aquifer below the town of chernobyl 10 km to the nuclear power station. 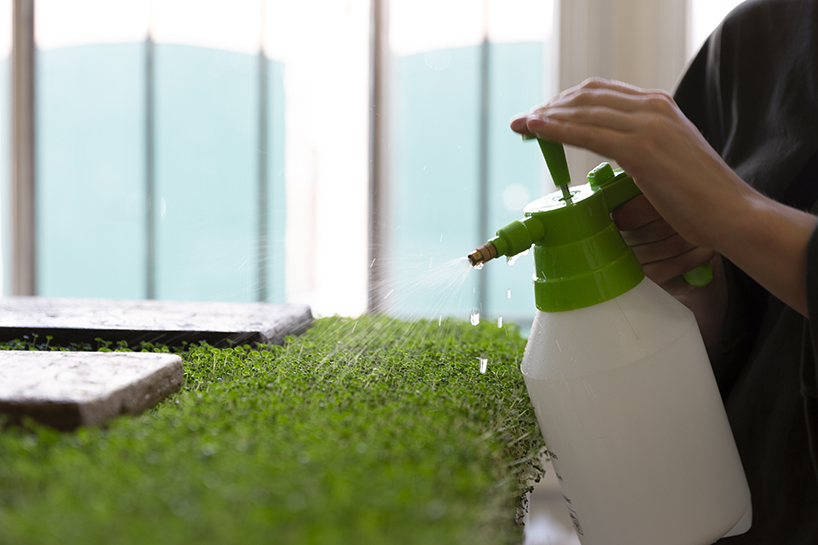 visitors had an opportunity to observe how microgreens developed and changed during the exhibition. green tables were created by PROSO atelier

5. the chernobyl spirit company with the project-reseach atomik vodka