the ‘rimino‘ concept phone, developed by iranian-born, sweden-based designer amid moradganjeh, extends the trope of human-centered design throughout both its interface and operating mechanisms. operation is highly gestural and context-dependent; workflow is based on ‘goals’ and elements rather than apps; and the device is given a stylized feel with screen graphics influenced by scandinavian and poster design.

lacking any buttons, the flexible device is operated via intuitive user actions

free of buttons, ‘rimino’ is controlled via intuitive actions. its flexible body is twisted to scroll and stretched or compressed to zoom in or out. natural behaviors, such as scratching text out to erase or hide it, are built-in, and the phone also readily interacts with physical objects placed on it, initiating onscreen relevant options for actions.

bending the device returns it to a mode prepared to capture media, the type of which can be determined with natural gesture-based activities. for example, to take a photograph or record voice, the user may position his hands in a square as if holding a camera or curved as if holding a microphone. holding the device and rotating the wrist (as if checking a wristwatch) would show the date and time.

interestingly the phone’s behaviour is also highly influenced by its immediate environment. placing a wallet on top of the phone, as one might instinctively do when not wanting to be disturbed, would cause the phone to automatically stream all calls to voicemail. looking at the phone when it rings before replacing it in a pocket or purse would indicate that we want to ignore the call, and the ringing could cease. by contrast, a user putting his phone next to his ear signifies that he wants to make a call, and thus simply saying the name of the contact will initiate dialing.

‘rimino’ also provides seamless options for data input from the environment. the device can be written or drawn on using almost any tool, from fingers to real pens and pencils. further developments in gestural sensing technology could permit any surface to be used as a remote ‘screen’ for input, recognized in realtime by the phone. thus diagrams or text sketched with a finger onto paper, napkins, tabletops, or even an arm or leg would be savable or sendable on the device. ‘rimino’ itself may be used to draw on other surfaces, with the illustration likewise appearing on the device screen.

environmental context initiates relevant actions on the device; here, placing the phone over the ‘cook time’ information in a cookbook, automatically opens the timer, properly set

moradganjeh observes that the app system, and the program-based interfaces from which it derived, is not designed for our natural behaviour. with ‘rimino’, instead of needing to open a flickr application to upload or send files, a user simply takes a picture and then determines whether he wants to upload, send, or edit an image, via actions suggested by the phone itself. in general, ‘elements’ replace pages as the active objects, with multiple elements capable of working together as users accomplish tasks.

communications are envisioned as ongoing, and relevant information is compiled on screens dedicated to interactions with a particular person rather than as a series of message threads. a ‘poke’ function, either running in the background or explicitly initiated by the user, offers feedback on when or how further communication may start with a particular contact, avoiding the need for a string of text messages or calls devoted solely to determining a time to continue to talk.

other features conceptualized include the ability of the phone to send out e-mails or call a user’s friends if accidentally abandoned in a public place, blocking access to private data in the meantime. 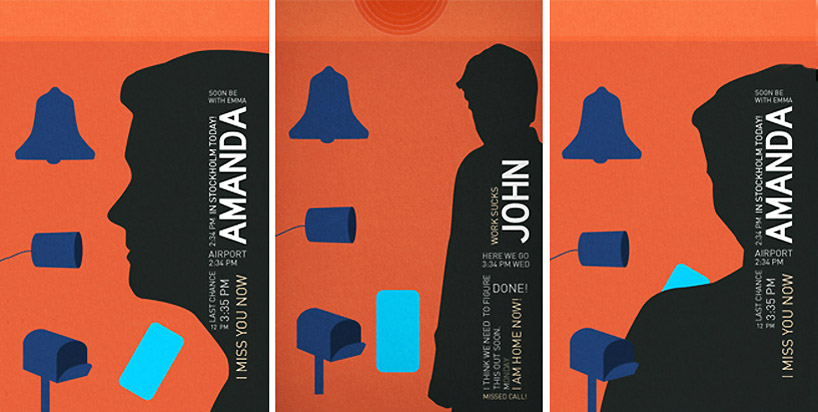 screen graphics of user communications, which replace thread-based messaging with compilations of the interactions between these two contacts

cloud-based computing, in conjunction with shared hardware that permits nearby cameras or keyboards to be used for device input, offers the flexibility of network connectivity for seamless activity across a range of hardware. moreover, moradganjeh envisions that ‘rimino’ recognize what devices are nearby and adjust its behaviour accordingly. multiple users next to one another could share the same map on their phones, or transfer data between one another.

the device makes use of e-paper for its display, and fabric or leather for its 4-8mm body to retain a craft-like feel. on its back, a ‘lively pad’ might simulate temperature, texture, pressure, moisture, air flow, smell, or light, enabling additional modes of interaction; moradganjeh offers the example of the phone becoming cooler when its battery needs to be recharged. 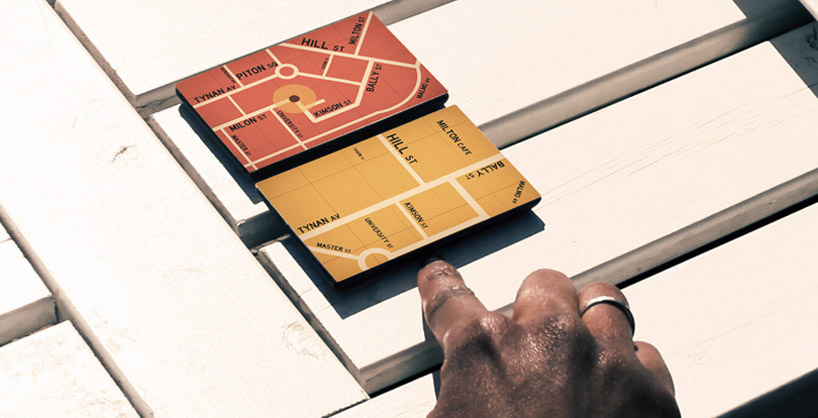 placing two devices near each other enables linked behaviors; here, the depiction of the same map on both phones,  one of which has then been rotated and zoomed

video illustration of functions, modes of interaction, and possible daily uses of ‘rimino’

in development of the project, moradganjeh accepted open suggestions, conducted focused research on a handful of users, and designers and experts before structuring his basic concepts, obtaining feedback through case interviews and surveys, and then initiating direct tests and GUI and prototype mockups