hingston studio recently designed the reception of the ampersand building in soho london. the space is informed by ampersand’s visual identity, which tom hingston and his team also designed. realised using a palette of concrete, american black walnut, oak and brass, the reception was conceived so that it would age well, eschewing the usual developer’s approach to such spaces.

tom hingston told us more about the project:

designboom: firstly can you tell us about the thinking behind the visual identity for ampersand?

tom hingston: we conceived an identity that could express the idea of a conjoining or convergence; a logo that represented a union of different elements. being modular it gives us the latitude for the component parts to be deconstructed and then re-configured, allowing the identity to be presented differently across each platform. 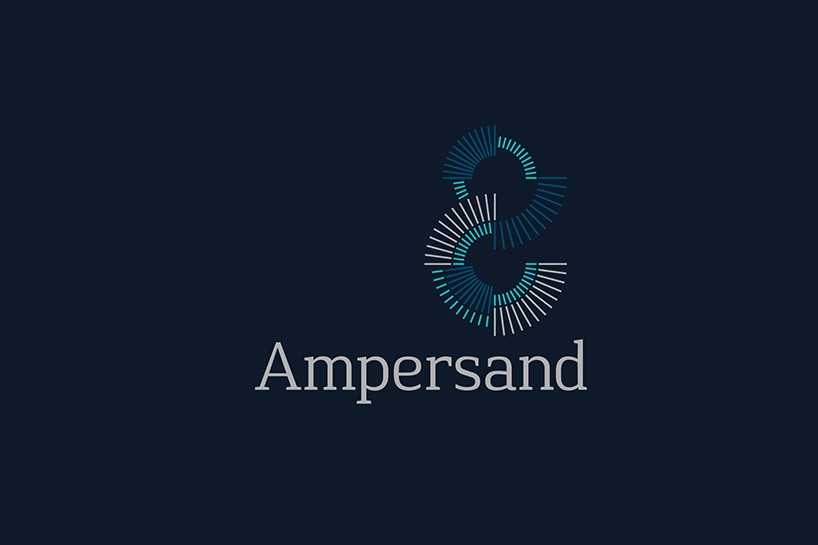 DB: what design brief were you given for the reception?

TH: resolution (the developer) encouraged us to explore how we might be able to introduce the branding into the physical space. we saw this as a great opportunity to break with the the typical developer’s approach. we decided to embrace a sculptural approach that would integrate both desk space and art into one holistic scheme.

the design is intended to encourage interaction from without and within, as individuals pass by and then through the space. seen from different viewpoints, the sculptural elements or patterns appear separated or disparate, but as the viewer moves down the street and around the corner of the building, there is a visual alignment, where all parts comes together to reveal the complete form. 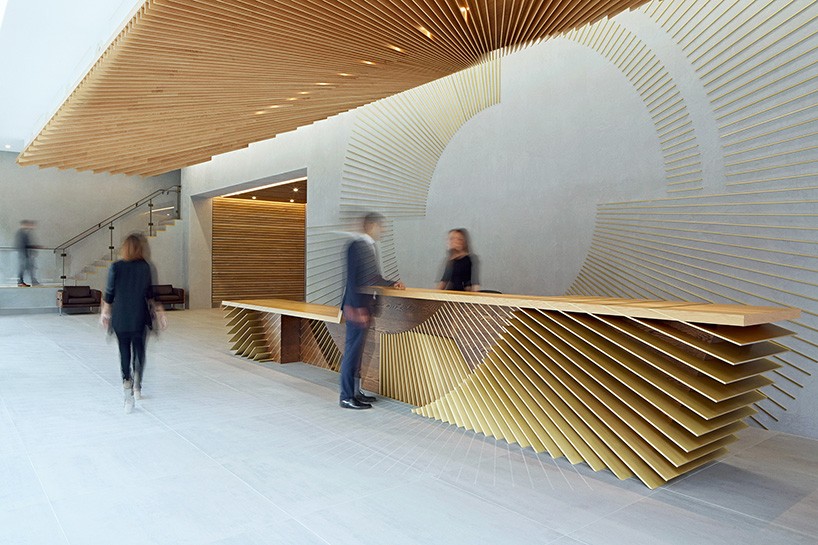 the reception desk is made from one tonne of solid american oak, it’s complimented with bespoke and polished brass slats – the total length of brass used was equivalent to a circuit of an olympic running track.

DB: was the brand identity / logo the sole influence on the reception design?

TH: the identity was the primary inspiration – particularly the delicate, linear patterns. this idea of a union of different parts is then expressed in a more sculptural means through our reception space. other, early influences for the space were also the geometry of the italian architect, gio ponti, harry bertoia’s sculptures and also mid 20th century scandinavian design. all of these have the ability to shape serene spaces and environments that discretely immerse the viewer or passer by. also, and not least, soho itself has been a constant source of energy and inspiration. 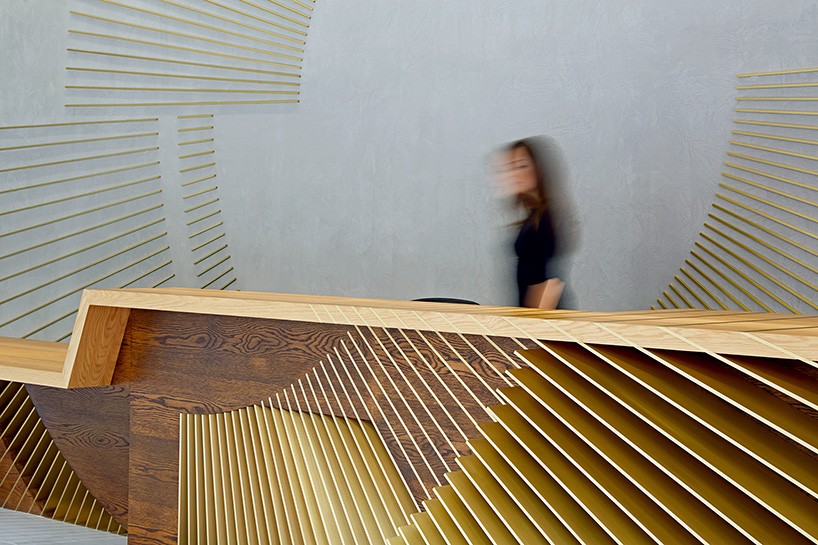 close up view of the front desk

DB: what were some of the challenges involved with realising the space?

TH: although the scale and scope of the design created a number of different challenges, some of the specifics have been truly mind-boggling! our design required the work of 8 people, across 4 different trades, over a total of 2,626 hours. this doesn’t include the 3 weeks to conduct the on-site installation. the ceiling raft craft was crafted from 2 logs of oak veneer over a period of 3 months. for the back wall, the total length of brass used was equivalent to a circuit of an olympic running track. the reception desk itself literally weighs a tonne. one tonne of solid american oak, bespoke and polished brass slats along with the two steel supports that were needed to be the framework. to accurately align the desk with the radial array on the concrete wall behind it, the brass slats had to be each individually cut by laser. 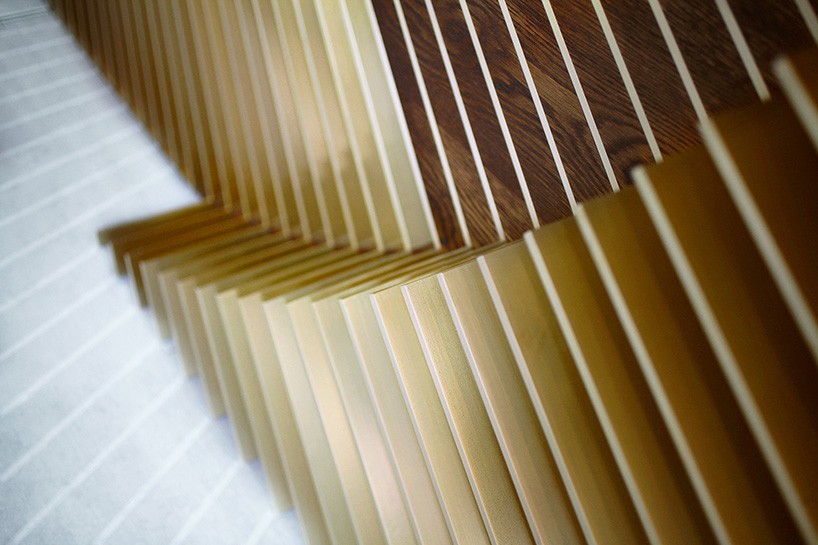 detail of the brass slats DB: what has been the most rewarding aspect of the project?

TH: with any large scale project like this that has so many moving parts and so many people involved, keeping your focus and retaining your clarity of vision is essential. there are obviously times when you’re presented with challenges, but that’s when it helps to have a really good team around you, to overcome those hurdles. the most exciting aspect of anything we do is the journey that you take from an idea on paper into a reality. realising something, especially on this scale, is incredibly rewarding. 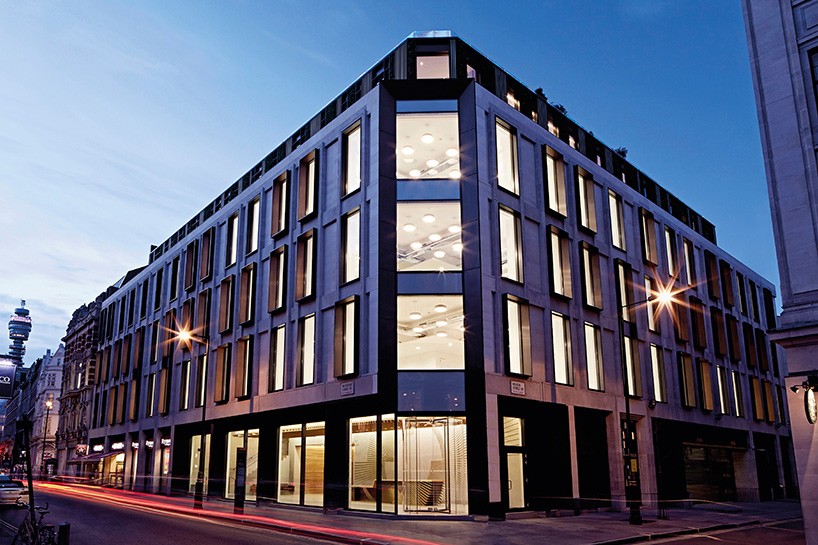 the ampersand building in soho, london 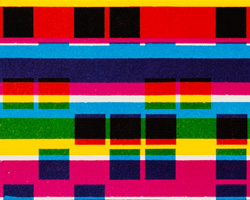