rendering of ‘strait power’, designed and engineered by anthony reale 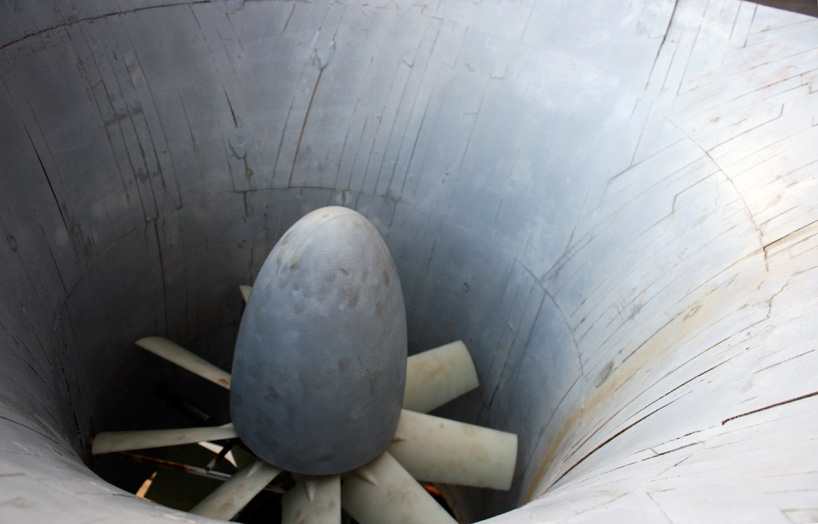 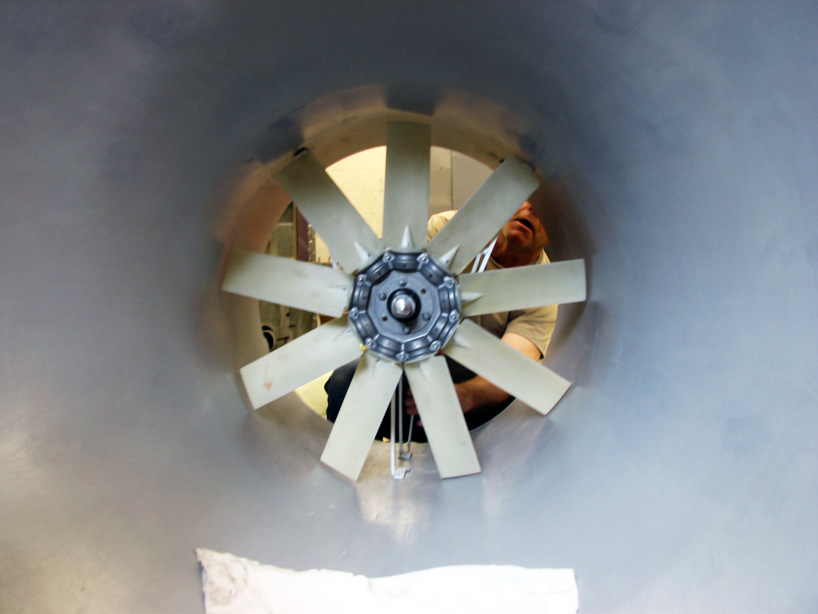 detail view of blades, prior to testing 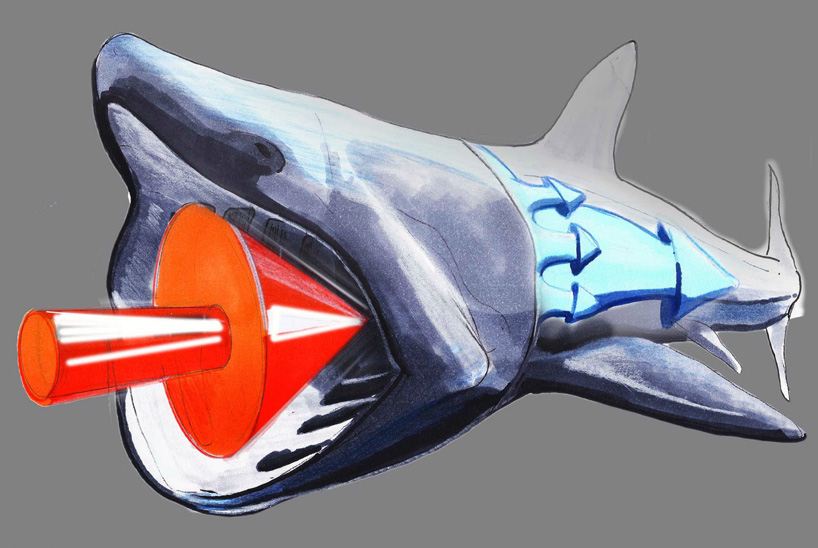 it was in observing the activity and appearance of the basking shark that reale gained insight into his model’s structure. the shark spends 18 hours a day with its mouth open, sifting for food, and the movement of the water into its mouth and out its gills aids in its swimming. reale recognized that ‘fluid movement is more than just using the energy flowing through you but the energy flowing around you to aid in your task.’ he determined more specifically that, as with airplane wings, a pressure differential exists along the shark’s body: water moves at higher pressure along the straight bottom, while the increased distance it must travel over the curved top means that it is at lower pressure. 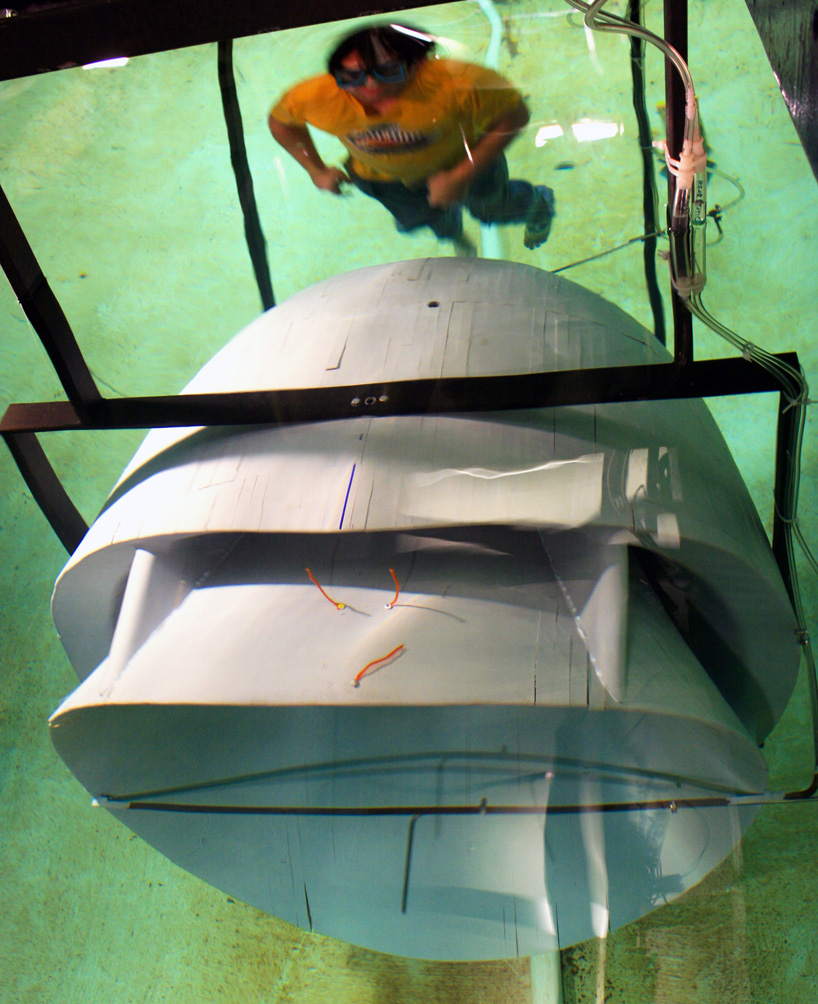 reale adapted this revelation to the design of the turbine blades themselves, and he progressed quickly into building a prototype of the device. the 900-pound model is made almost entirely of wood, screwed together, and sealed with marine paint. the turbine underwent 200 hours of testing at the university of michigan’s marine hydrodynamics lab, and although upon its removal it had cracked from the additional force, swollen from added water weight, and begun to rust, the team calculated that the prototype already improves power output of a single turbine blade by 40%, a figure reale expects to improve in later versions. 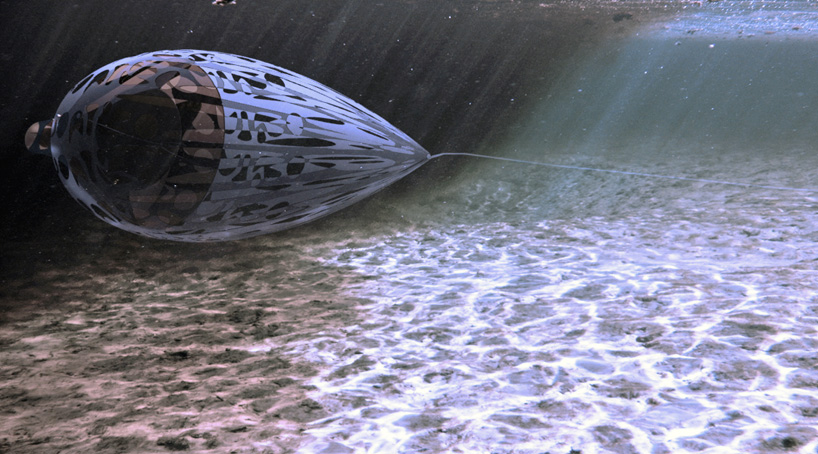 concept sketch of ‘military cow’, of the ‘power in your pack’ development project

‘power in your pack’, designed for outdoor and military use, is a portable and collapsible version of the turbine that takes the form of a backpack and is capable of charging small electrical devices. 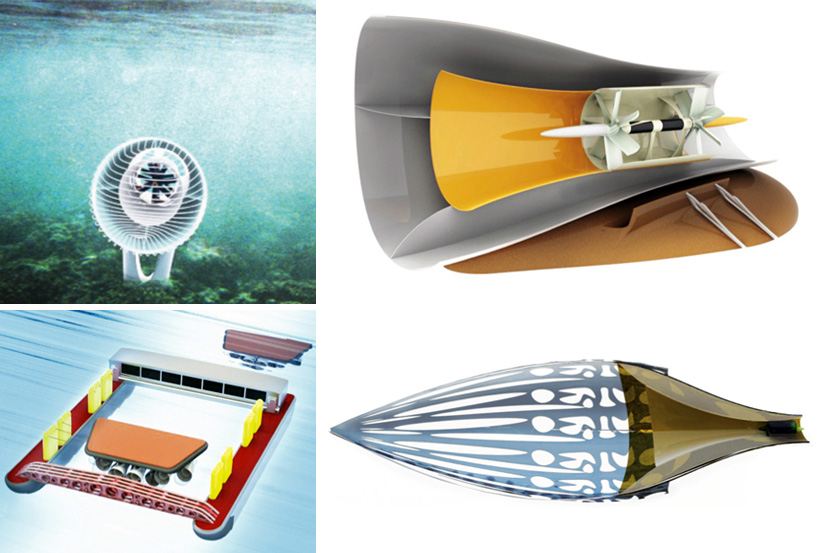 ‘industrial strait power’ uses 10-foot diameter turbine blades to provide energy to high-power electrical generators of 40,000 watts and higher. the smaller scale ‘residential strait power’ utilizes a power train assembly that can be equipped with either a hydraulic pump or electrical motor, depending on the type of output desired.

the ‘strait power wild life power barge’ shares a similar conceptual design to ‘R.E.D.’, but the top of the barge is designed as green space with trees, to provide a safe nesting site for migratory birds. the turbines on the underside of the boat provide energy to riverside residences and businesses, minimizing for certain kinds of locations the amount of energy lost via resistance in power lines.

realized, tested, and archived over 130 days, the project involved 711 hours of production work and 200 testing hours, as well as 95,000 USD worth of private and in-kind donations, composed primarily of milling machine time at the college for creative studies and testing time and parts from the university of michigan. 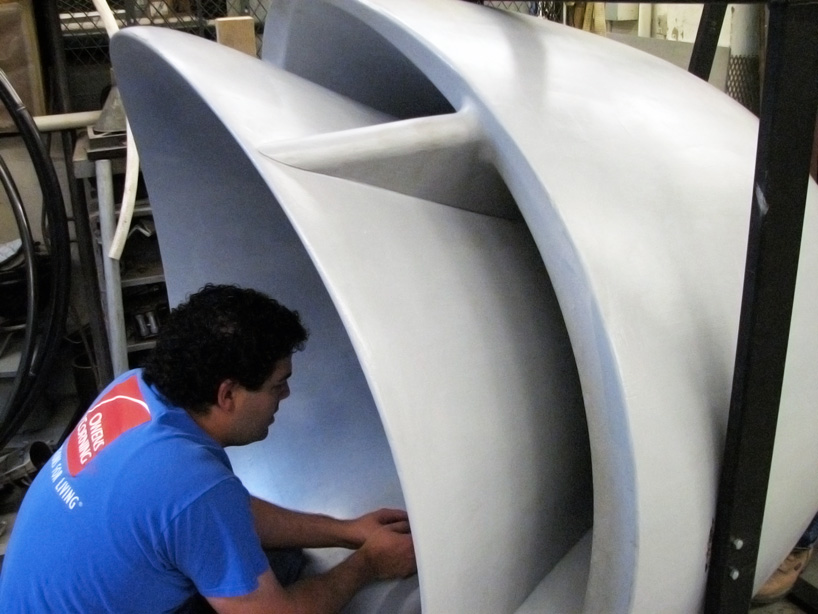 reale works on the in-progress model