london-based architect asif khan has won the 2014 cannes lions ‘grand prix’ for innovation, for the pavilion he designed at this year’s sochi winter olympic games, making him the first architect to have won the prestigious award. ‘megafaces’, designed for russian telecom operator megafon, was a giant structure with a kinetic exterior, formed by 11,000 actuators. the building was able to transform in three dimensions to recreate the faces of visitors to the site. participants at the olympic park had their portrait photographed and transferred to the pavilion’s façade, which functioned as a huge pin screen extending as far as two meters. find out more about the winning design in our feature, here.

below, designboom shares an exclusive video about the ‘megafaces’ pavilion and how it was conceived.

khan was also the youngest architect to be shortlisted for the UK pavilion at the milan expo 2015, which will be realized by wolfgang buttress. 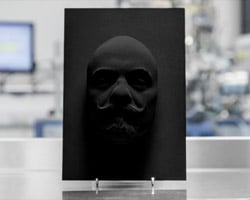