AUDI has given designboom some exclusive insight into the AUDI trimaran yacht – a graduate project by german designer stefanie behringer, developed under the supervision of the AUDI concept design in munich, germany.

in the words of designer stefanie behringer: the new concept integrates two jet skis within a motorboat. the hull’s architecture is based on a trimaran (a boat with multiple hulls), consisting of a main center hull which is supported by two smaller outrigger hulls on either side of the boat. inside each of these two outrigger pods, one jet ski is stored.

the main advantage of multi-hulls,  is their slender shape which makes them efficient, resulting in less friction resistance in the water. furthermore multi-hulls are very stable at sail and at anchor.

the boat is driven by two efficient and lightweight AUDI TDI (turbo-charged injection) diesel engines, while the jet skis are electric driven. at low speed up to 8 knots, for example in bays or harbors, the whole boat can be moved with the single power of the electric driven jet skis, without producing any emissions or noise. at higher speeds of up to 30 knots, the two diesel engines can be switched on continuously. during this process the electric supports the diesel engines while accelerating, so that the boat is planes at a faster speed and less fuel is needed. at the same time the diesel engines recharge the batteries of the two jet boats. 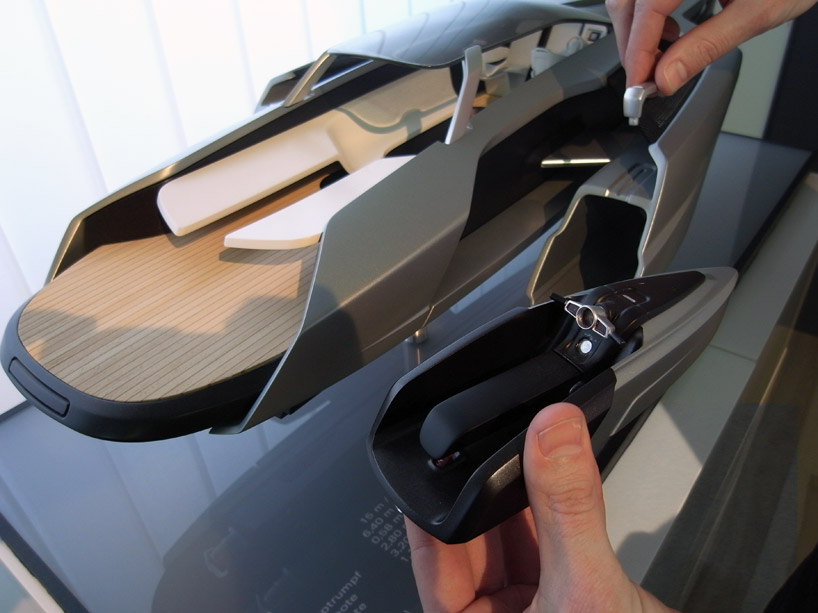 jet ski is stored in the outrigger pods image © designboom

the boat’s overall length is 15m, and due to its slender center hull measures only 6.40 m wide. the jet driven concept allows one to even travel in shallow water, because its draft is only 58 cm. on deck there is space for 12 people, while below, the boat offers more room in the form of four berths. by flipping down a saloon table within one of the spaces, another two additional berths can be offered. 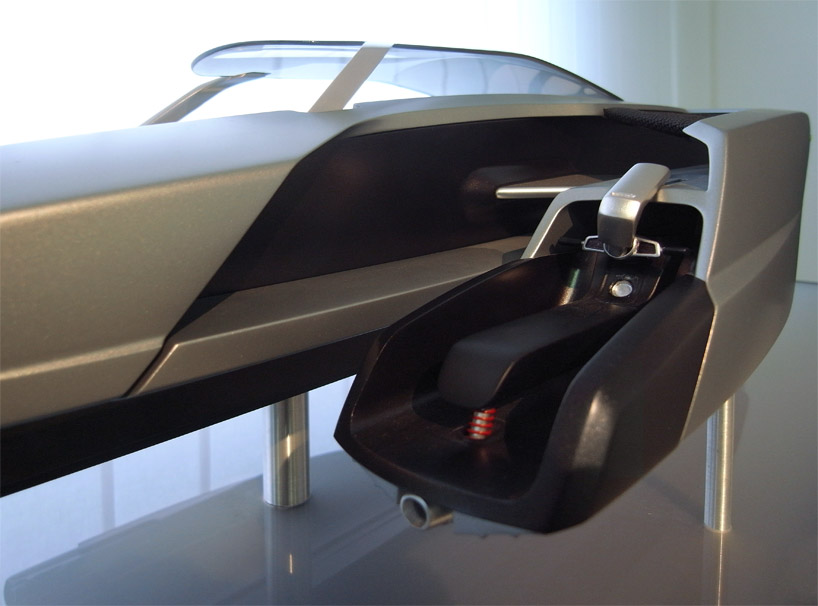 the design is based on the AUDI brand values – progressive, sportive and premium: the vessel has an athletic, elegant appearance without being too powerful or aggressive. the main proportions of the exterior follow the graceful character of a sailing yacht, emphasized by mesh surfaces within the outriggers and the shape of the main hull, which narrows towards the back. the jet skis follow the elegant and light appearance of the main boat. the silver frame, which links the outrigger pods with the main hull, accentuate the technical components of AUDI and is reminiscent of aluminum frame structures seen in automotive engineering. 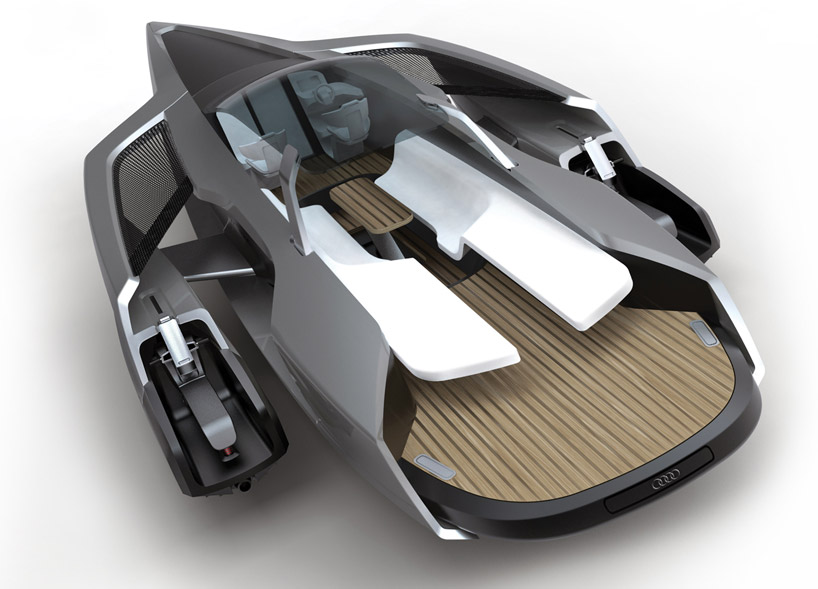 the deck area is a place for relaxation and socializing. in contrast to the more technical and emotional designed exterior, this space is based on very calm and puristic shapes, offering characteristics of a lounge. between the two spacious seating benches, which grow out of the large sun lounger surfaces from the back, a table can be moved out of the floor. the huge panoramic glass roof not only shields one from head wind, but also works as sun protection. the high side walls prevent from water spray. the storage area in the front gives space for equipment like snorkel, fins or the shopping from mainland. the suspended seating bench offers optimal driving comfort. 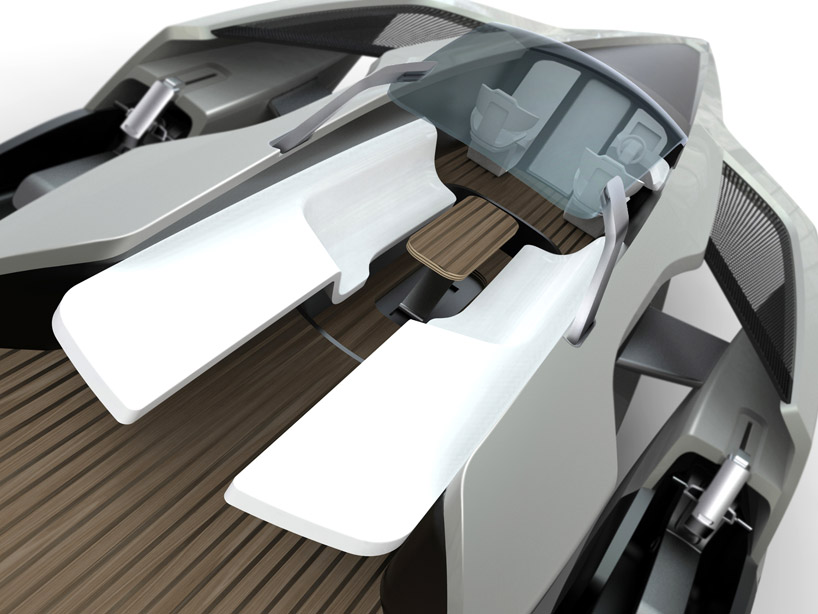 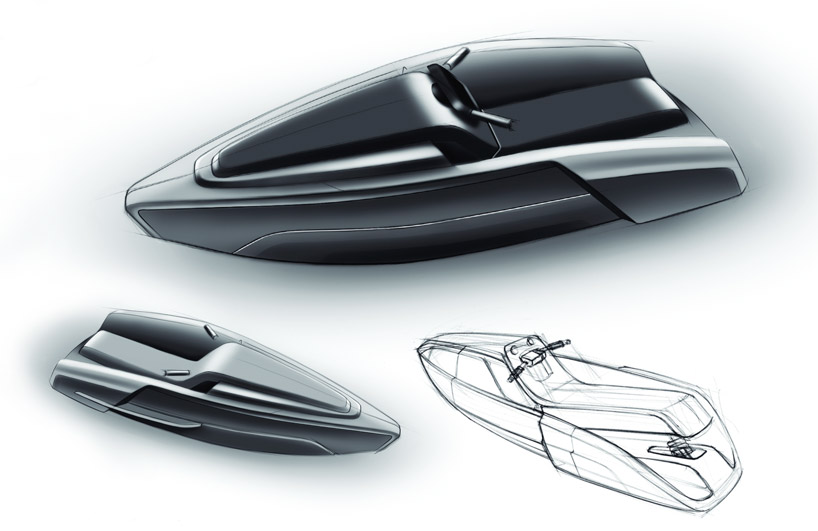 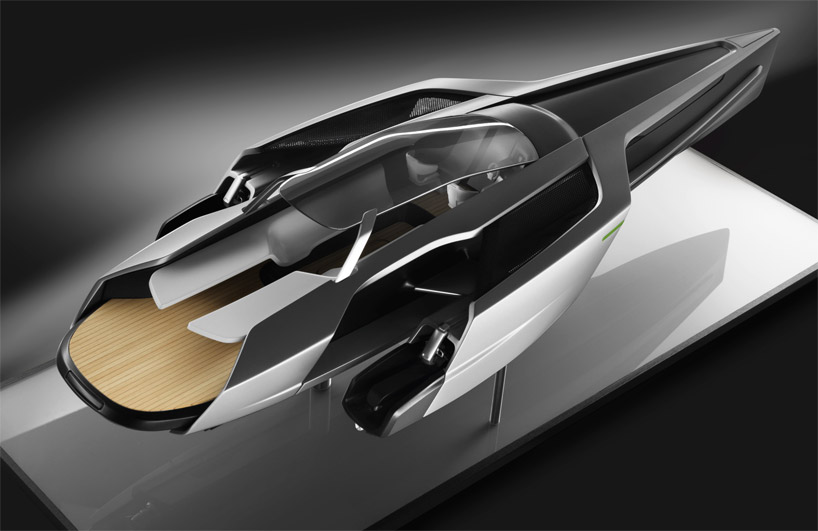 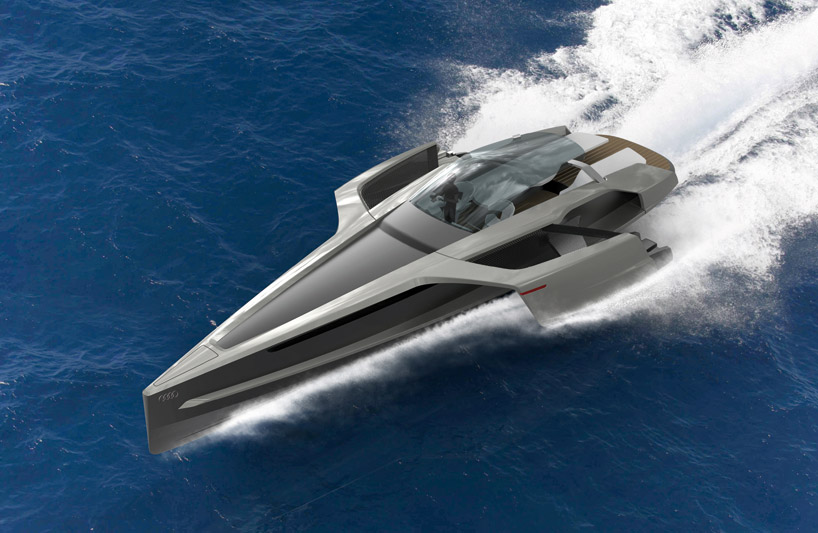 as the trimaran boat is in its concept phase, plans for implementing the model into reality have not yet been made. 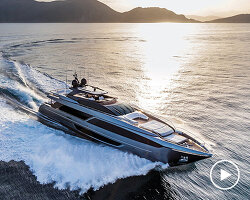