earlier today the the london organising committee of the olympic games and paralympic games (LOCOG ) unveiled prototypes of the london 2012 olympic torch designed by barberosgerby.

the torch is made from a golden aluminium alloy that is perforated by 8000 circular holes, each representing one of the 8000 torch-bearers that will take part in the olympic relay. it has a height of 800mm and weighs 800g. 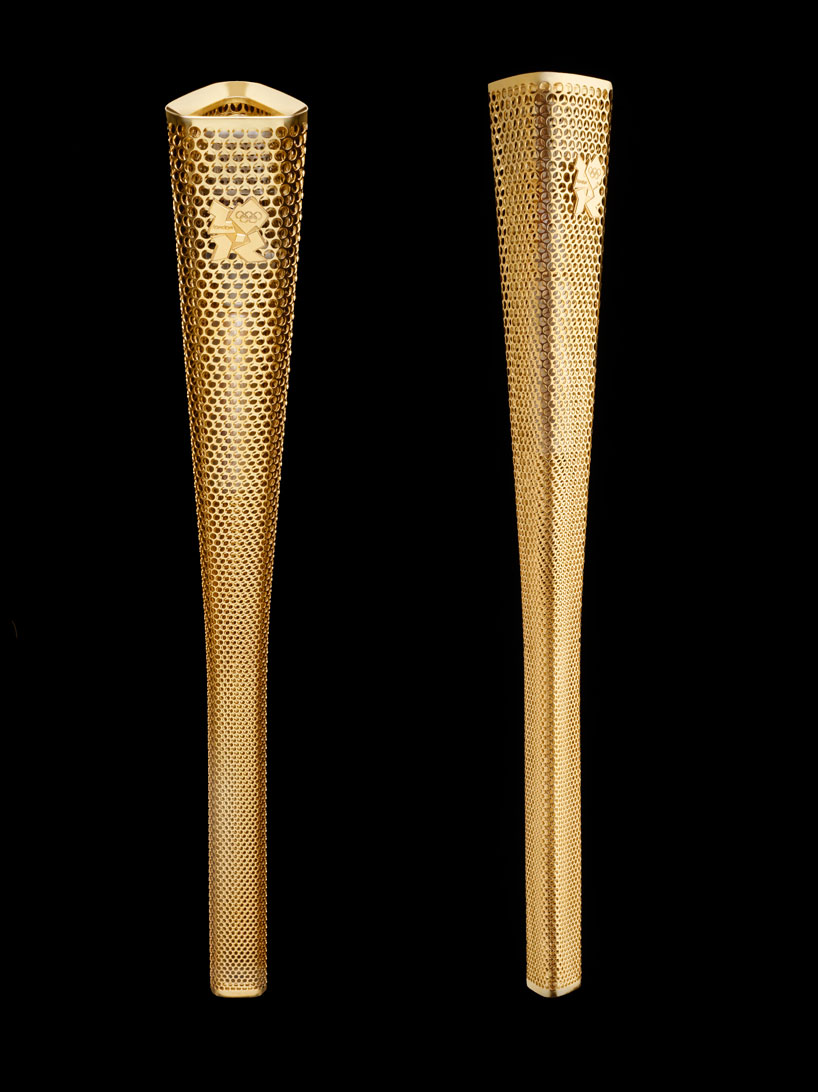 earlier this year, east london-based designers edward barber and jay osgerby won the competitive tender run by LOCOG and the design council that set the brief to design a torch that reflects the celebratory nature of the olympic torch relay and the olympic games. the winning design connects the london 2012 olympic torch relay to each of the 8,000 torchbearers and their community. the torch’s triangular, gold-coloured form is perforated by 8,000 circles representing the 8,000 torchbearers and their stories of personal achievement and/or contribution to their local community which will be celebrated during the london 2012 olympic torch relay. 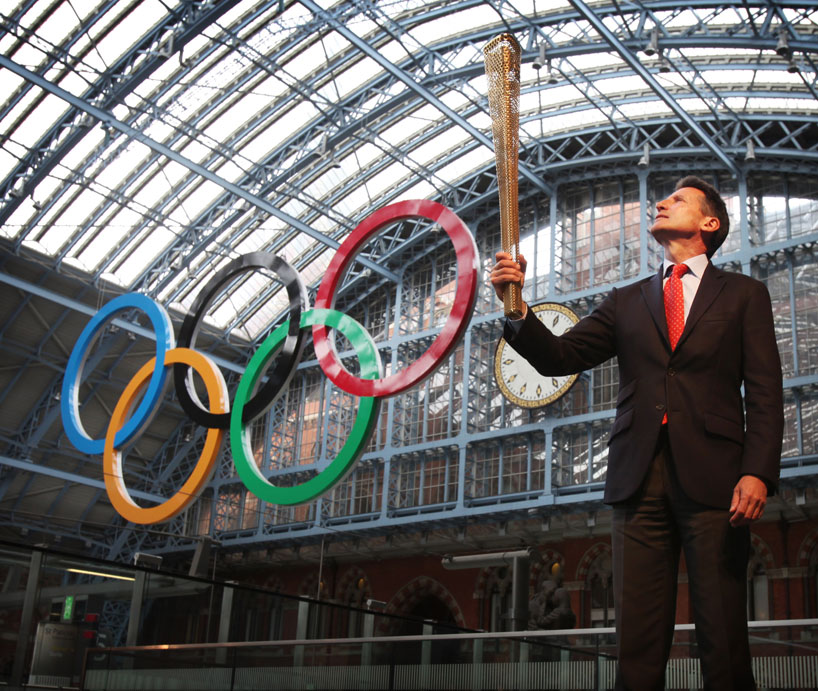 sebastian coe, chair of LOCOG, said: ‘the torch that carries the olympic flame during the olympic torch relay is one of the most recognisable and significant symbols of an olympic games. members of the public right across the UK are busy nominating inspiring people to be torchbearers and i am thrilled we have a beautifully designed, engineered and crafted torch for them to carry.

‘integral to the design are the 8,000 circles, a lasting representation of the torchbearer  stories of personal achievement or contribution to their local community that will be showcased with every step of the relay.’

edward barber and jay osgerby explained: ‘ever since we were young we have loved  the olympic games. as designers, this is quite simply the best project going: to design an icon for the games. we’ve wanted to be involved since july 2005 when we were celebrating winning the bid with the rest of the UK.

we have worked hard to develop a torch that celebrates the relay, and reflects the passion for london and the olympic games. we wanted to make the most of pioneering production technologies and to demonstrate the industrial excellence available in the UK – it’s a torch for our time. this is our opportunity to represent the UK, in design terms, and we are incredibly proud to be doing so.’

design: the torch is made up of four key pieces – an inner and an outer aluminium alloy skin perforated by 8,000 circles that are held in place by a cast top piece and base. 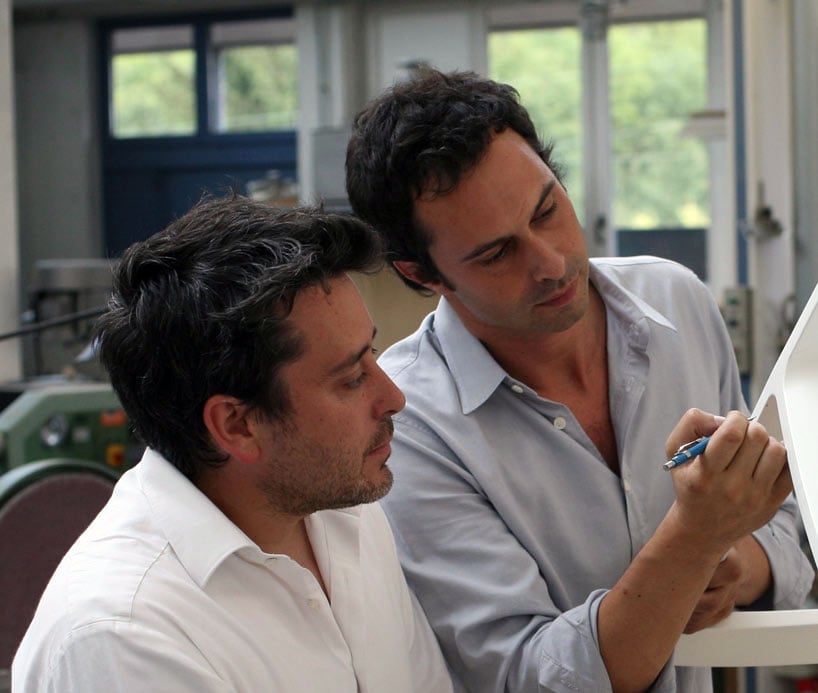 representing the inspirational stories of the 8,000 torchbearers who will carry the olympic flame, the circles which run the length of the body of the torch also offer a unique level of transparency – allowing people to see right to the heart of the torch and view the burner system which will keep the olympic flame alive. the circles also help ensure heat is quickly dissipated without being conducted down the handle and providing extra grip. london 2012 partner, BMW, have provided the use of their climatic testing facility for the torch to be tested.

shape: the torch stands 800mm high. its triangular form has been inspired by the identification of a multiples of three that are found across the vision and delivery of the olympic games:

• the three olympic values of respect, excellence and friendship • the three words that make the olympic motto – faster, higher, stronger • the fact the UK has hosted the olympic games three times – in 1908, 1948 and 2012 • the vision for the london 2012 olympic games to combine three strands of work – sport, education and culture. 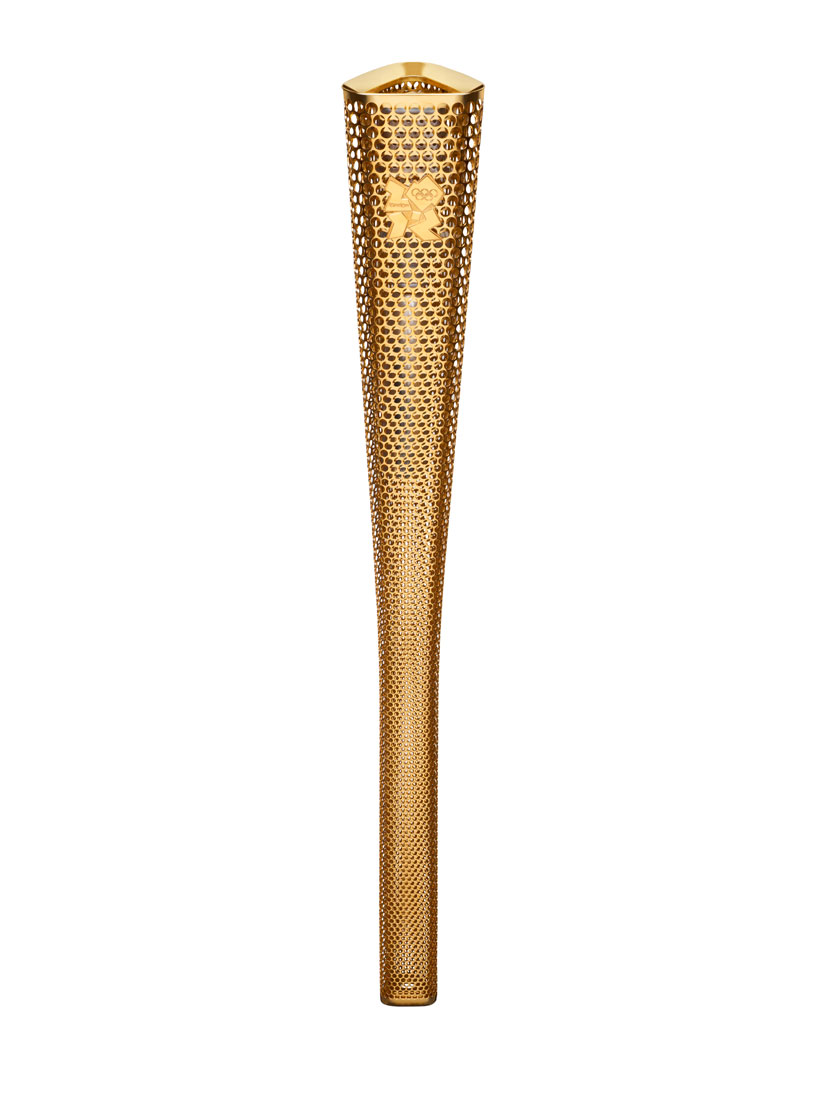 weight the torch weighs 800g. responding to a call in the brief to recognise the fact that more than half of the london 2012 torchbearers are expected to be young people aged between 12 and 24, several design features have been implemented to produce what will be one of the lighter olympic torches. crafted from an aluminium alloy, developed for the aerospace and automotive industry that is lightweight whilst having good tensile strength and excellent heat resistance, the 8,000 circles also reduce the weight of the final design whilst ensuring strength isn’t compromised.

colour the gold colour finish embraces the qualities of the olympic flame – the brightness and the warmth of the light that it shines. the 8,000 torches will have a gold-coloured finish that delivers an aesthetic beauty whilst having the ability to withstand the temperature of the olympic flame.