in 2013, while university of oxford’s weston library was undergoing a renovation by wilson eyre architects, the established institution wanted to continue its history in commissioning bespoke furniture by hosting a competition to unveil an distinguished chair to outfit three of its reading rooms, to be used daily by patrons of one of the world’s best known libraries.

the brief called for british creatives to work with british manufacturers to submit collaborative proposals that ‘fulfil the basic, pragmatic needs of the user, delivering comfort, support and the practical ability to work‘, invigorating the refurbished programs, while speaking of the school’s academic and design history.

the london studio barber & osgerby (edward barber and jay osgerby), together with isokon plus won with their oak ‘bodleian chair’ — a contemporary seating object that exudes a strong sense of craft heritage and sculptural form. the duo established the rear view of the design as a critical aspect of the concept, as it would be the most visible aspect when the chair is in situ. 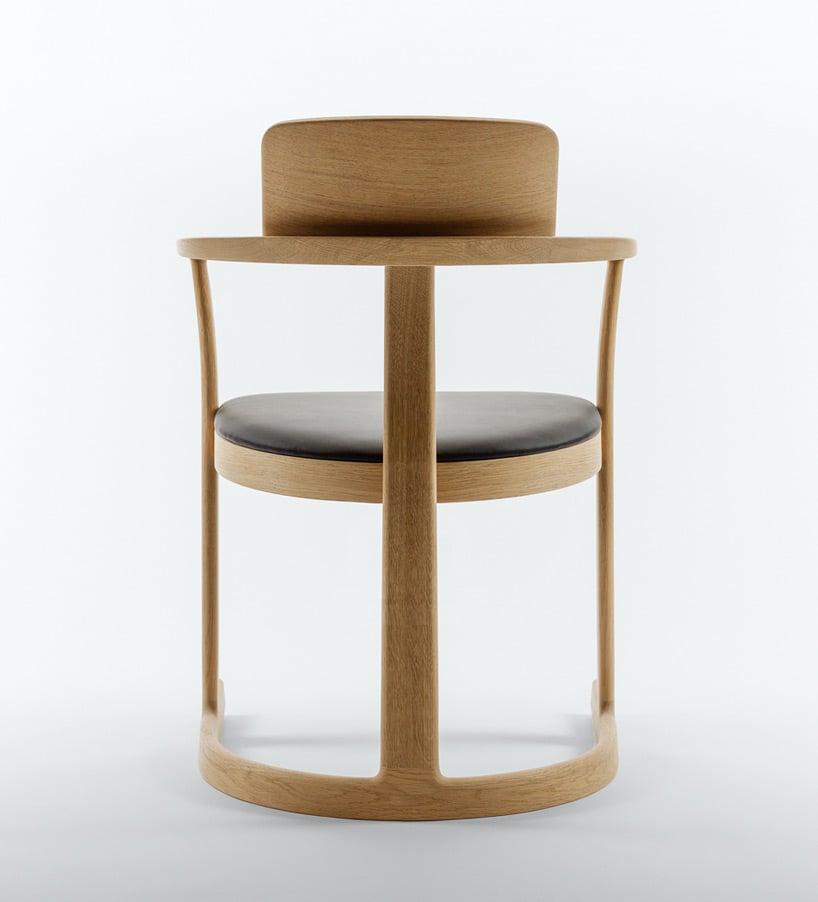 the back of the chair was a critical point in the design, as it is most visible in situ
photo by görgy kőrössy

the ‘bodleian chair’ is characterized by a strong vertical timber that resembles the spines of books on shelves, that also serves as one of the three legs that attaches to its sled base. generous rounded forms define the seat frame, while also offering comfort to the various physiques of users. this element is echoed in the wide supportive armrests that are idea for use with notebooks and tablets. while structurally robust, the ‘bodleian chair’ is strong and remarkably light. it comes with an upholstered leather seat with an elasticated webbing construction for support, layered by extra foam for improved comfort. a forward tilt allows ergonomic and dynamic seating positions, without any complex mechanisms. 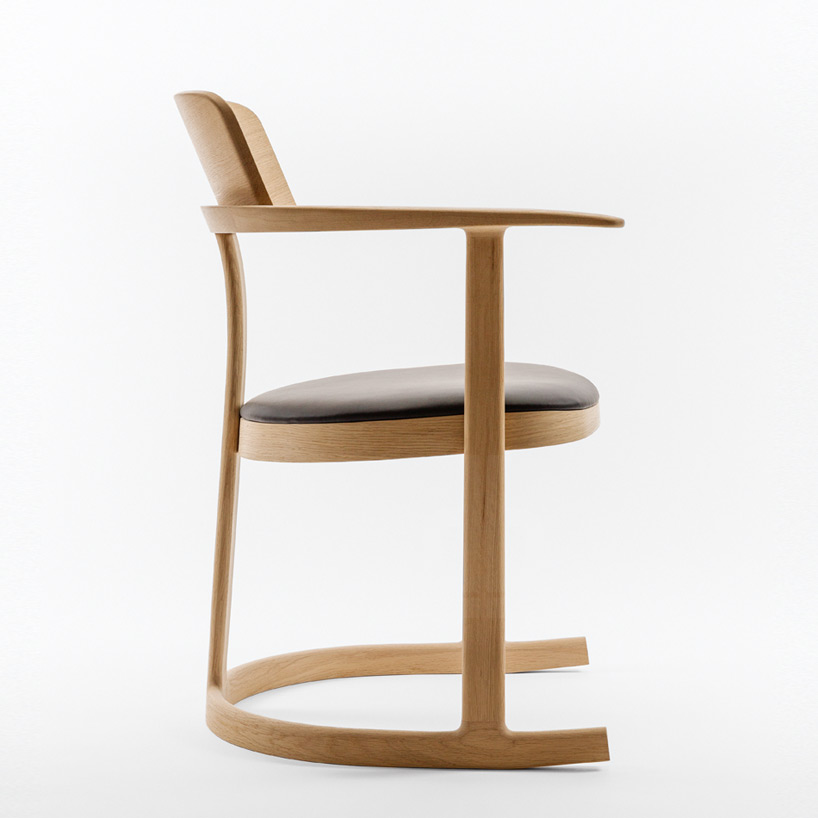 barber & osgerby’s design is only the third chair to be developed for bodleian–oxford’s main research library–since 1756, and now furnish the space which officially opened in march 2015. designboom speaks with edward barber about the evolution of the concept, and its overall reception:

designboom: what was the inspiration behind the design for your bodelian libraries chair? what references did you take from the original building and furniture?

edward barber: we were briefed by the library quite extensively about the specific requirements that were needed. having spent a day in oxford talking to the librarians and ‘readers’ we had a pretty clear idea of the initial direction for the design. the key things were comfort; the readers often spent up to 12 hours a day in the chairs as some people will travel long distances to use the library for one day. movement; being able to move or rotate 120 degrees easily in the chair to view a large number of manuscripts laid out on the table. the generous curved arms and back were directly related to this requirement. sound; the quieter the chair the less distracting when shifting positions. the only reference to the building was that we used natural oak so that it would age beautifully over time to match many parts of the interior. 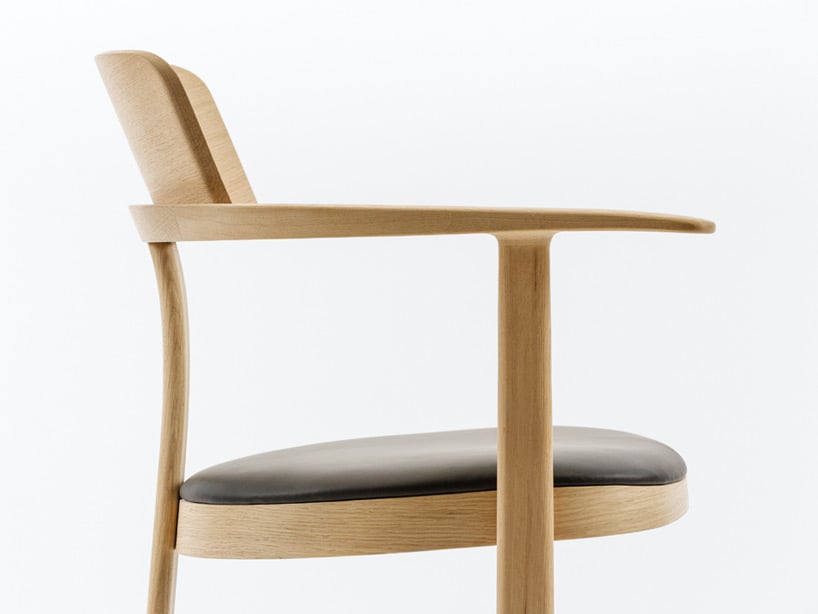 DB: you have designed many chairs over the years, are there certain rituals and processes that you follow throughout each design or is there a unique route each time?

EB: each chair always has its own story.

DB: how has the design developed since we last spoke to you in 2013, when you won the competition to design the chair?

EB: not much has changed except that certain structural elements have been sized up after testing and further refinement was done to the armrest. 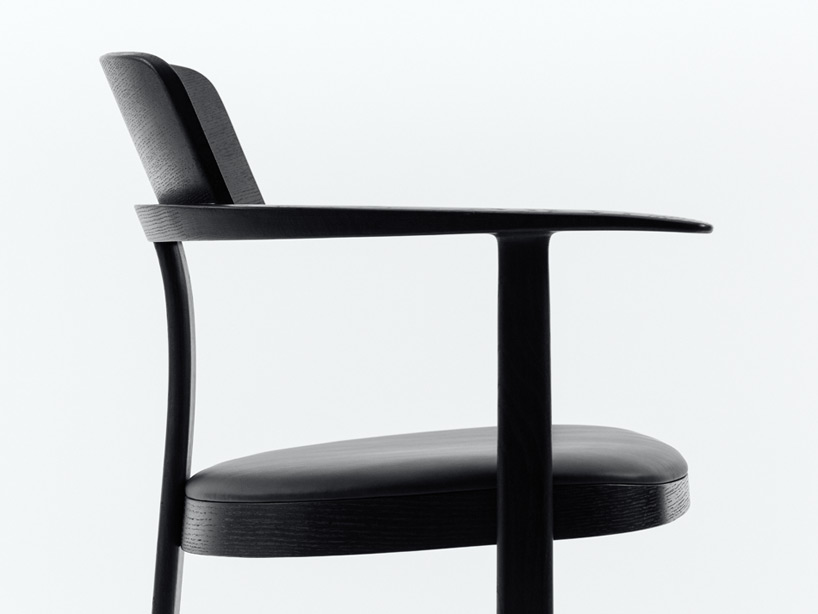 black version of the ‘bodleian’ chair
photo by görgy kőrössy

DB: what are the final materials that have been used in the chair design and why, how do these materials add to the user experience?

EB: natural european oak is used for the frame. some parts are laminated, other machined and all hand finished to give the chair that soft wonderful feel that you can only get from natural wood. the oak was left in its natural state. the upholstered seat is in leather. both materials were chosen for their aging qualities. we hope the chair will be in the library for the next 100 years and will look even better by then. 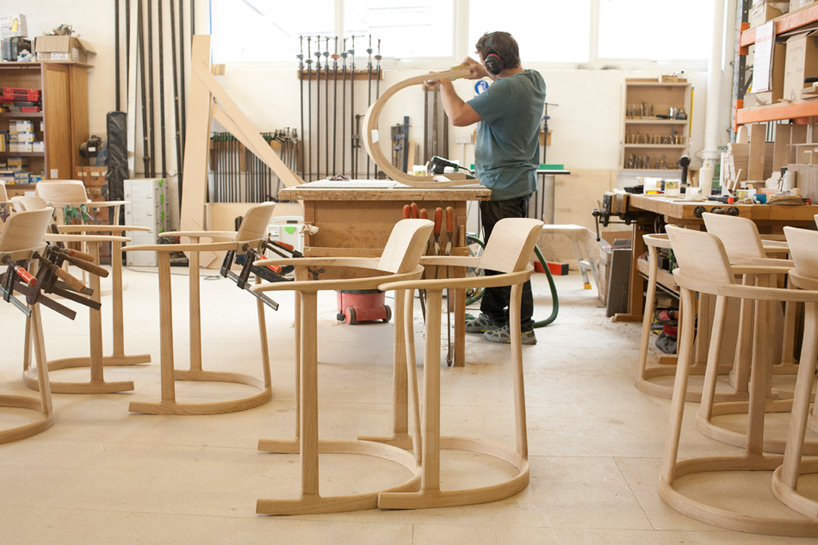 isokon plus has handcrafted the chairs in collaboration with barber & osgerby

DB:  you collaborated with isokon plus to manufacture the chair, why did you select them and how did the process of developing the chair from concept to final piece work?

EB: we have been working with isokon since 1996 when they made our very first piece of furniture, the plywood loop table. we have a great working relationship with chris mccourt and his highly skilled team of craftsmen and cabinet makers who are experts in both plywood and solid wood. they were the obvious choice for the chair. 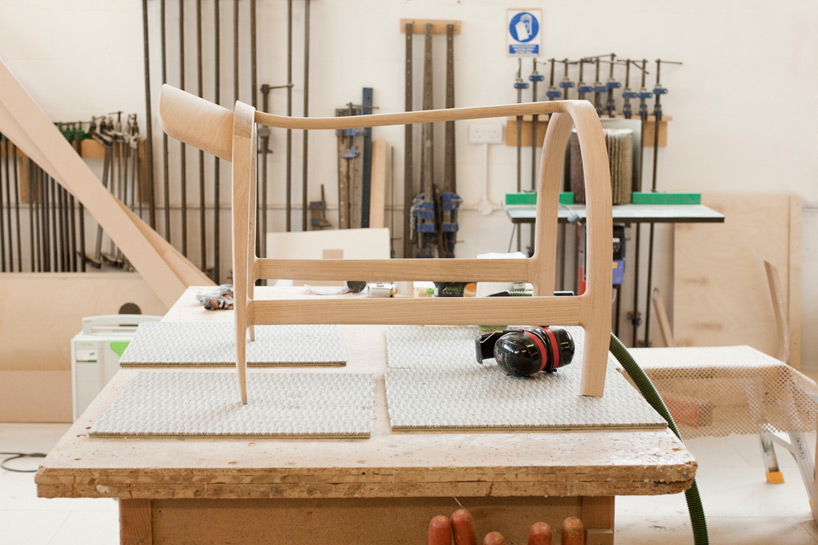 finishing the oak frame in the workshop

DB: the chairs have been recently installed, what has the reception been like? will they be installed anywhere else?

EB: the chairs have been very well received from the library staff and the readers themselves. they are more comfortable than the previous chairs, lighter and almost silent when moved around. the forward tilt which we introduced, from our research on the tip ton chair for vitra, has proved very useful for long study sessions. the bodleian library has exclusivity on the chair for the first year but we have had a number of enquiries from other colleges in oxford university and a few in north america. 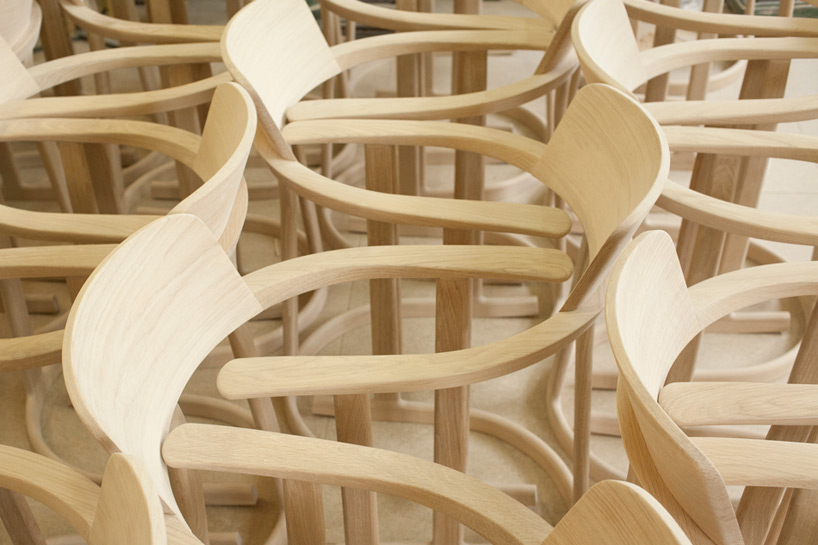 rounds and rounds of ‘bodleian’ chairs

DB: how do you feel seeing your design finally in the context of the original building?

EB: it’s always good to see your work in the correct context. this is a special case as so much of the design was specifically meant for this historic location. 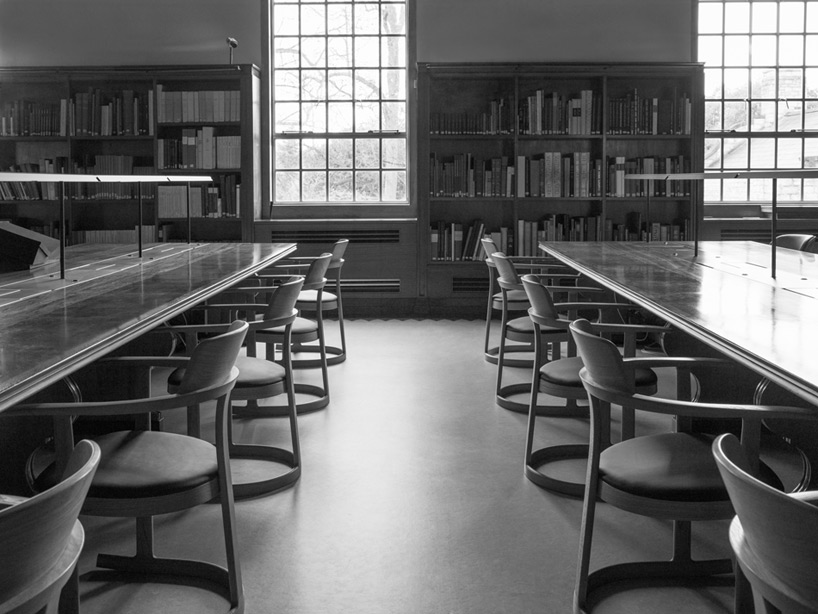 ‘as a child growing up around oxford, i was very much aware of the bodleian libraries. both edward and I have always admired the architectural and historical impact this building has had on the city. today, having the chance to be part of its on going heritage: designing what is only the third library chair in over 200 years, is a great honour and I hope that the chair proves to have the longevity to last a further 200 years.’ – jay osgerby 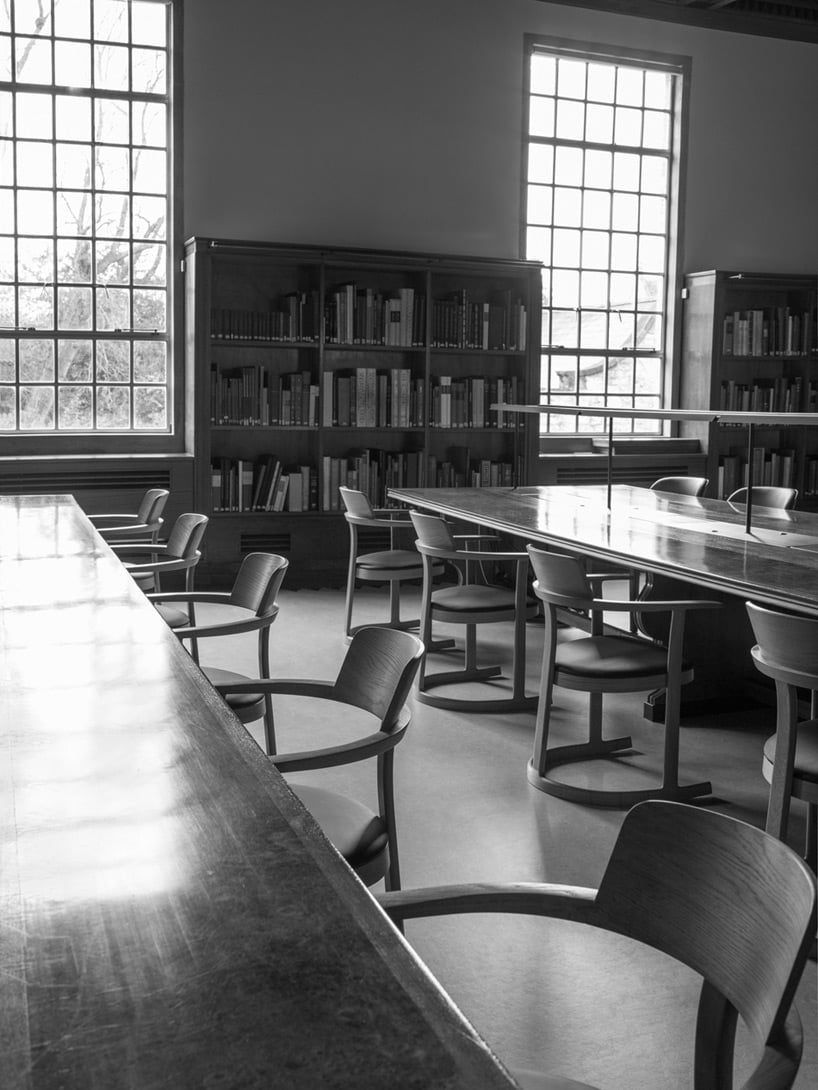 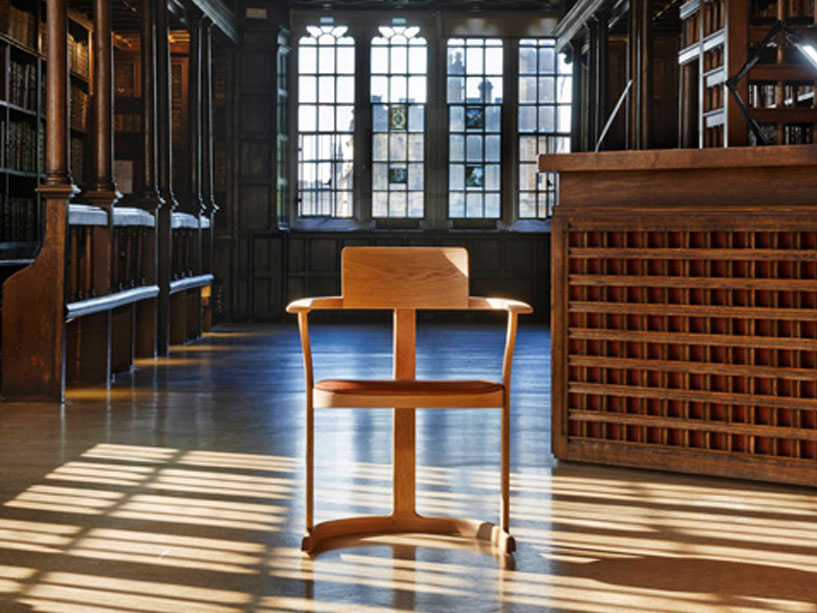 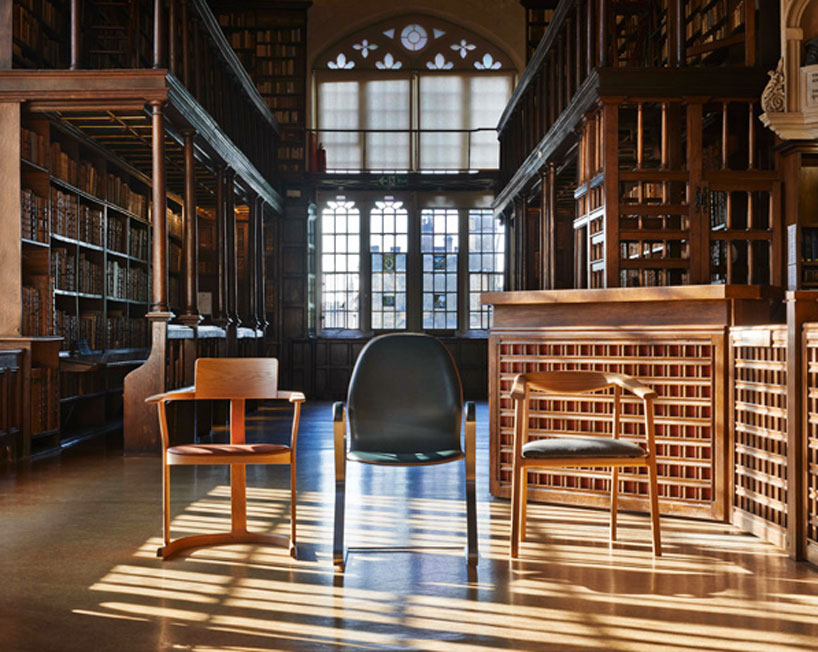 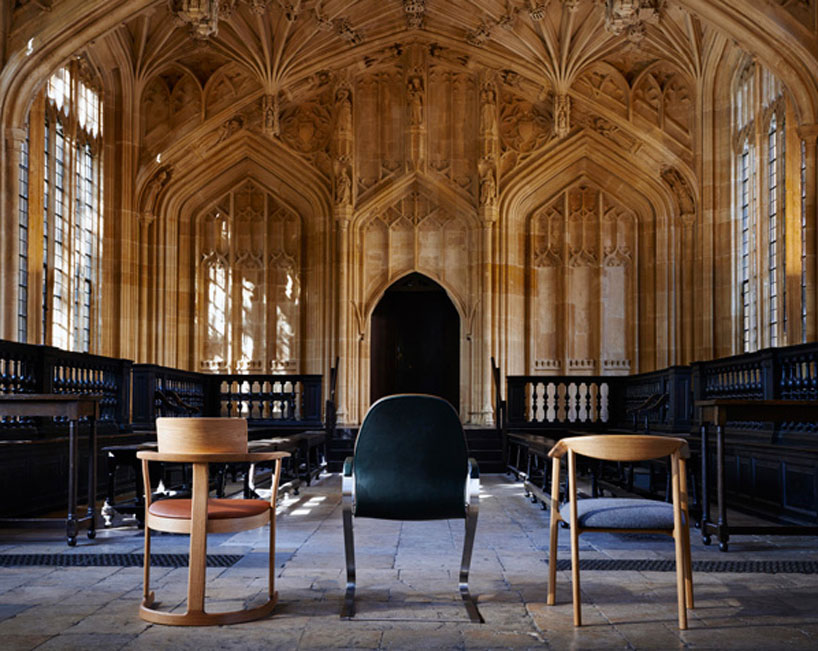 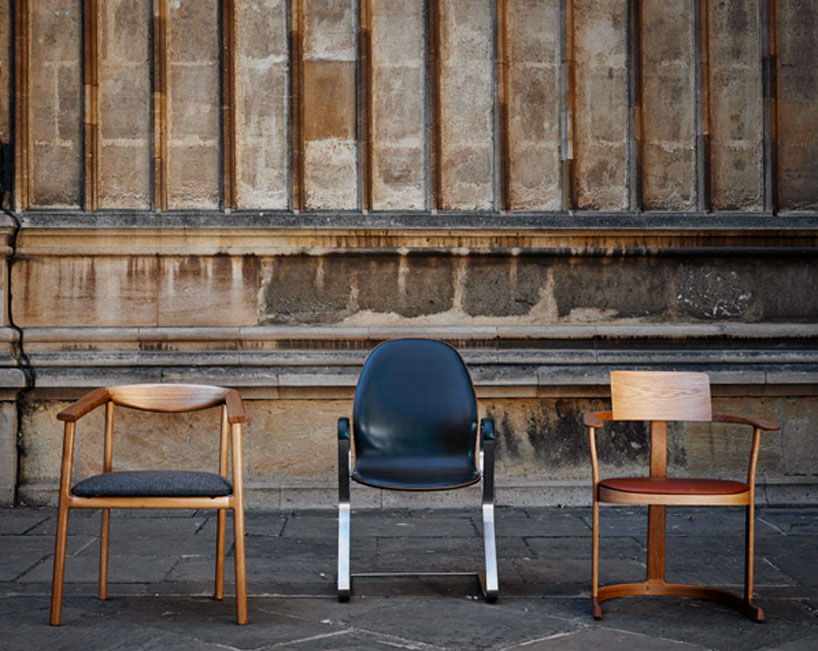 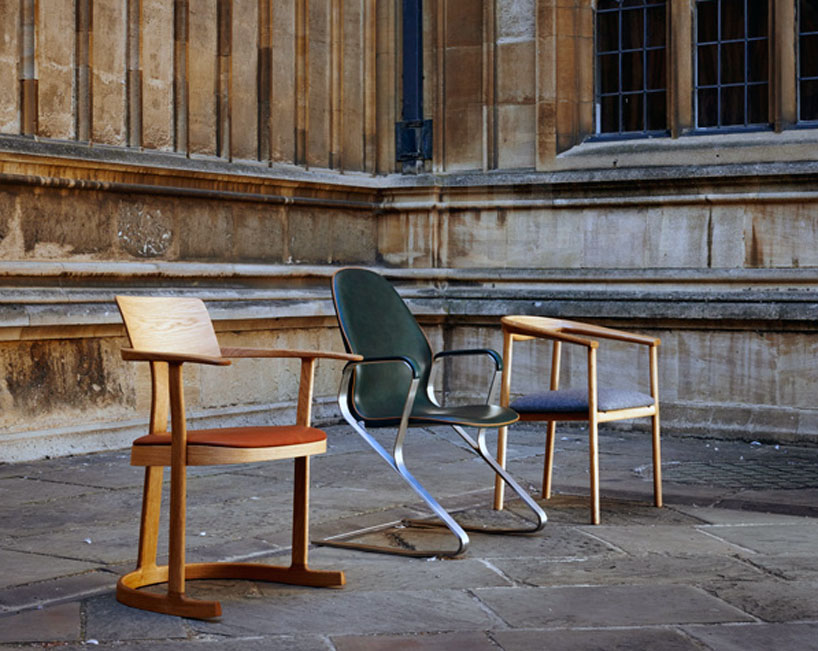