Product designer Liam de la Bedoyere from Bored Eye Design presents the ‘Sweep Bike,’ a conceptual children’s balance bicycle fitted with a wooden, fluid form to entice kids to jump on and ride. On how the idea came to be, de la Bedoyere writes: ‘While on holiday, Render Weekly was running a challenge to design and render an object where the main form gesture is built using a ‘sweep’ command. Sitting by the pool, I had only an A5 notebook and a pen, so I used my holiday time to explore ideas for this interesting challenge. This was rather liberating, with no computers, no client meetings, just back to design basics. After a few days of sketching, I had the idea for the bike and couldn’t wait to get back to the office and start visualizing.’ 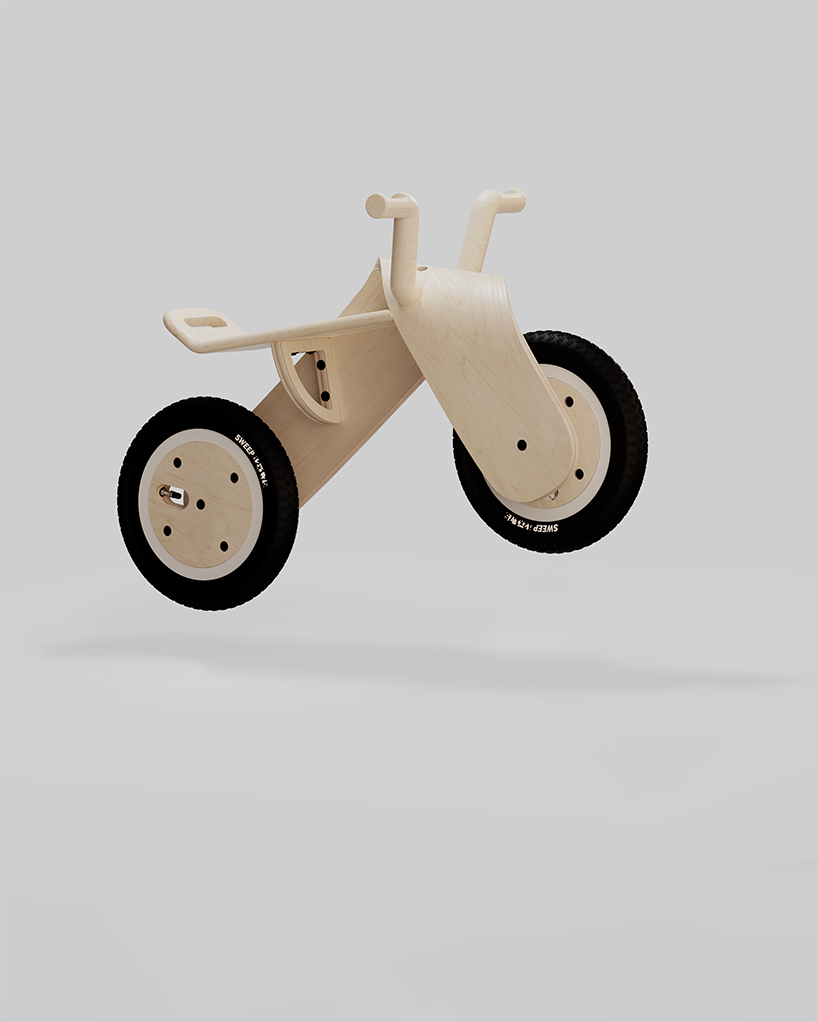 ‘Sweep Bike’ is a conceptual two-wheeler for children

steam-bending plywood to sculpt an organic and enticing form

The team at Bored Eye Design was at a crossroads with materials. Metal, plastic, or wood could achieve the bike form, but with such an organic flow to the design, the studio decided on wood for its aesthetic finish. ‘The wood grain would guide your eye through the sweep, making the fold more pronounced and not lost behind its casted shadow,’ the designer explains.

Based on that choice, de la Bedoyere opted for steam-bending plywood, which would be practical for a balance bike because there is no need to steer. And if the wood used in production is sourced correctly, then the ‘Sweep Bike’ could become an eco-friendly product, and its unique look could make it an alternative in the market for children’s balance bikes. ‘Kids may be the ones to ride the bike, but it is the parents who buy it for them, so we thought we would get creative with alternative appearances to entice them,’ he continues. 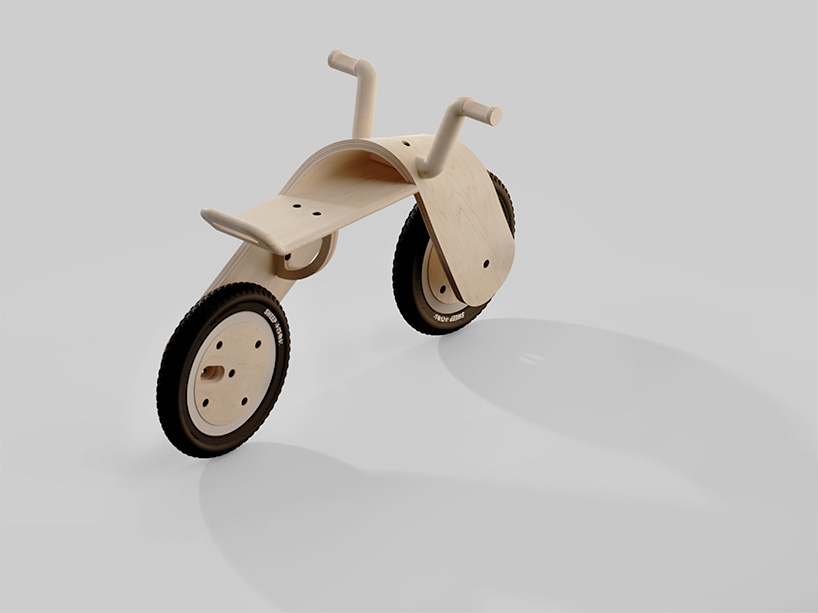 a sweeping, organic form that entices the littles ones to jump on and ride 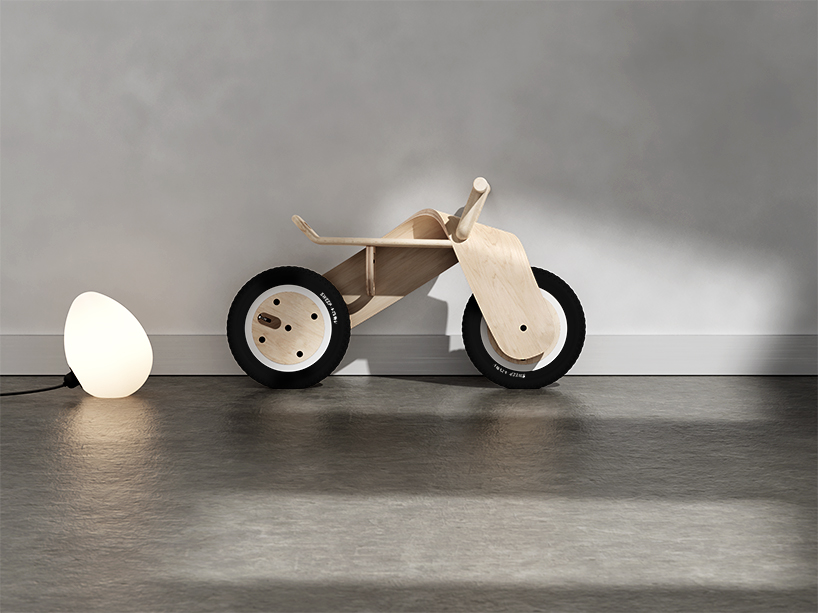 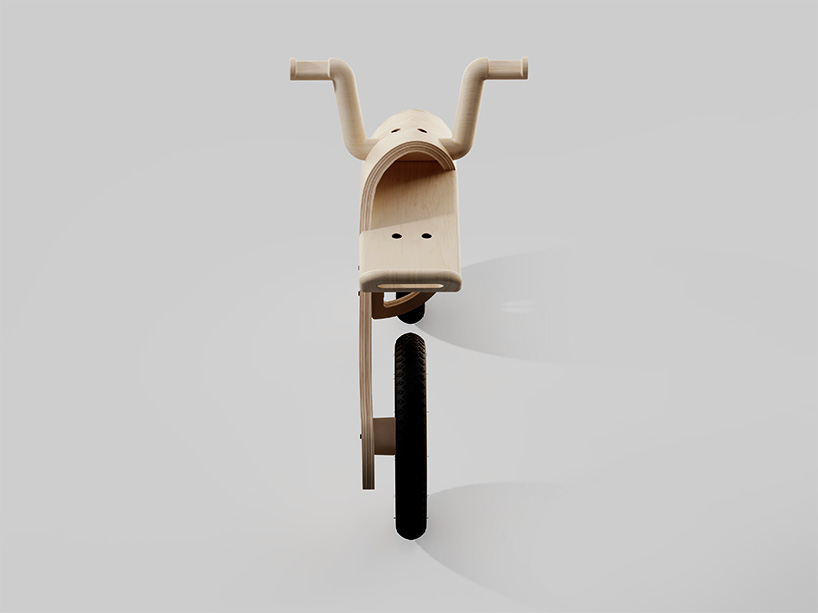 back view of ‘Sweep Bike’ 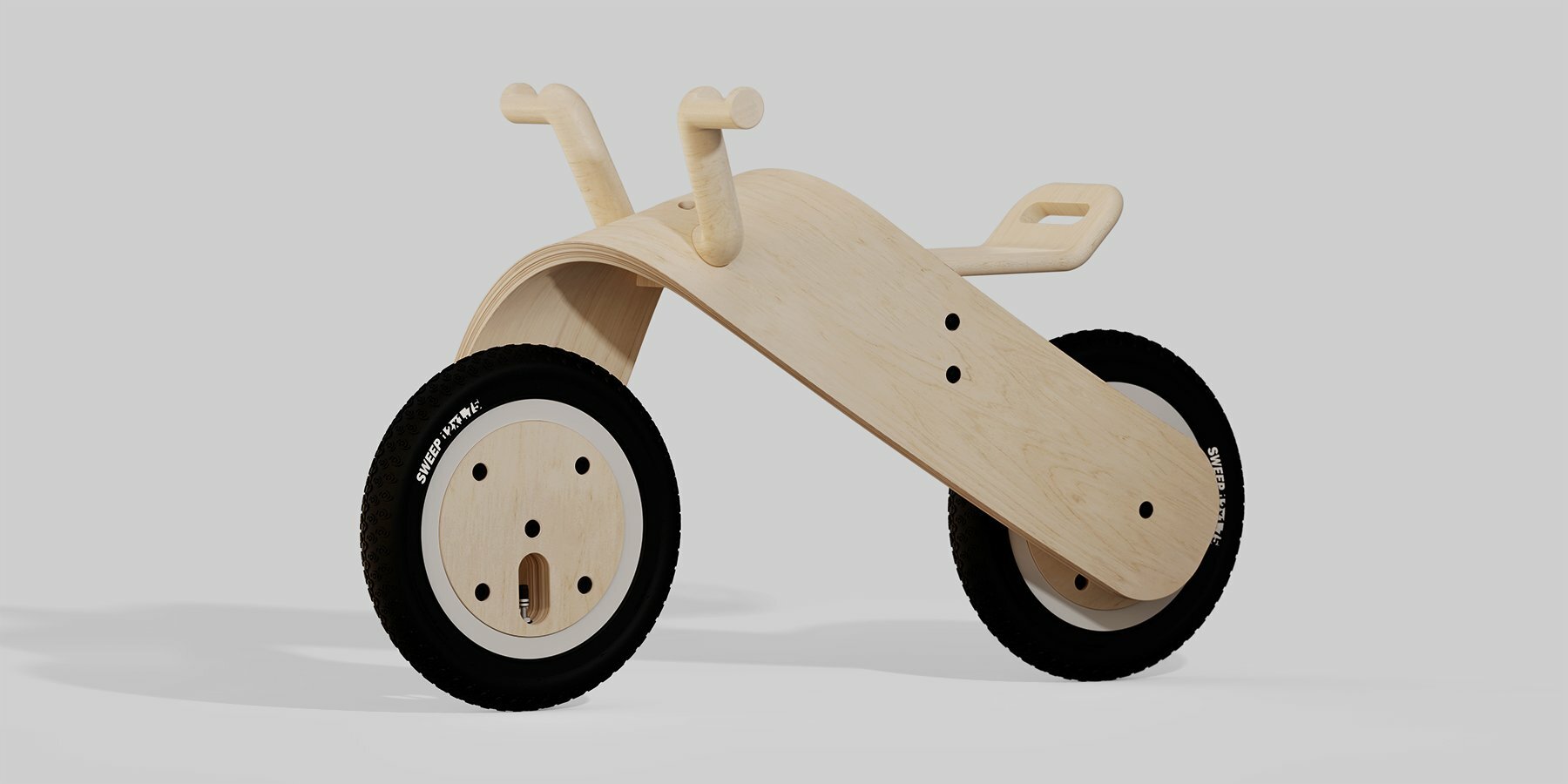 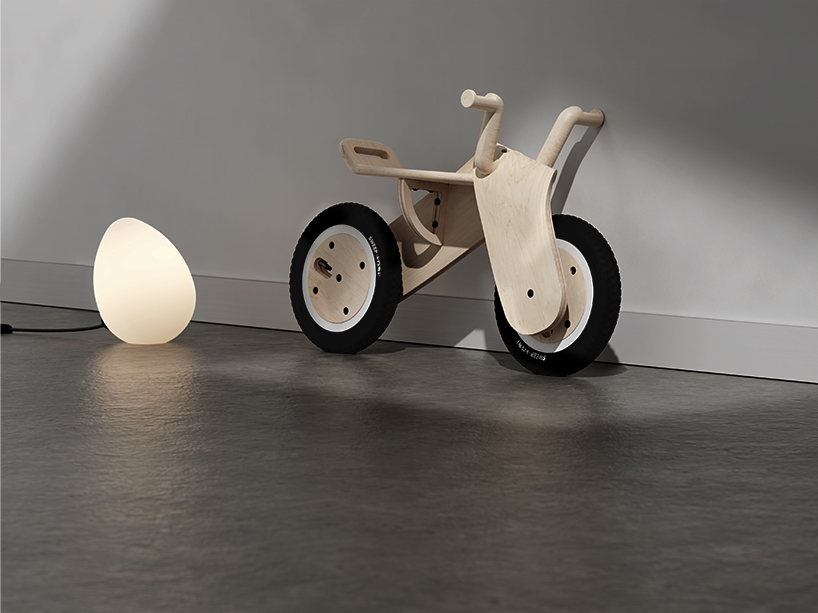 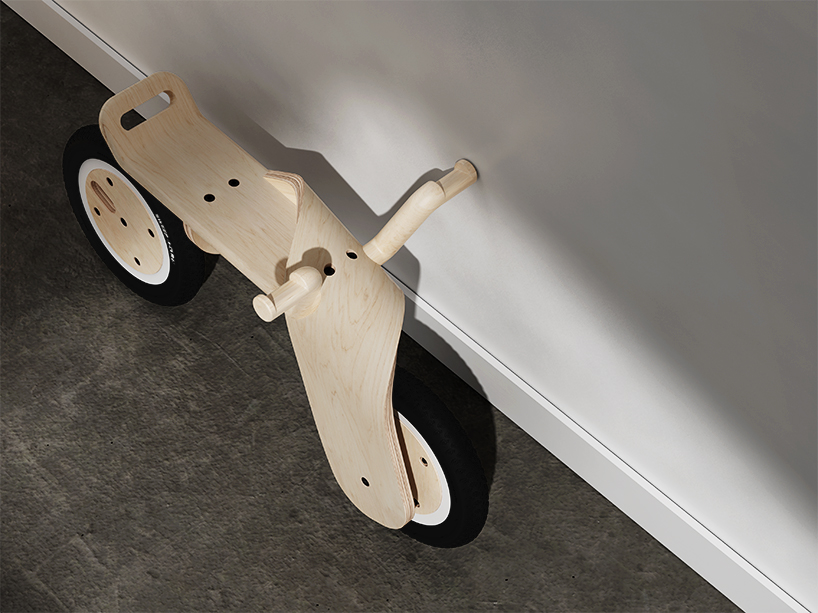 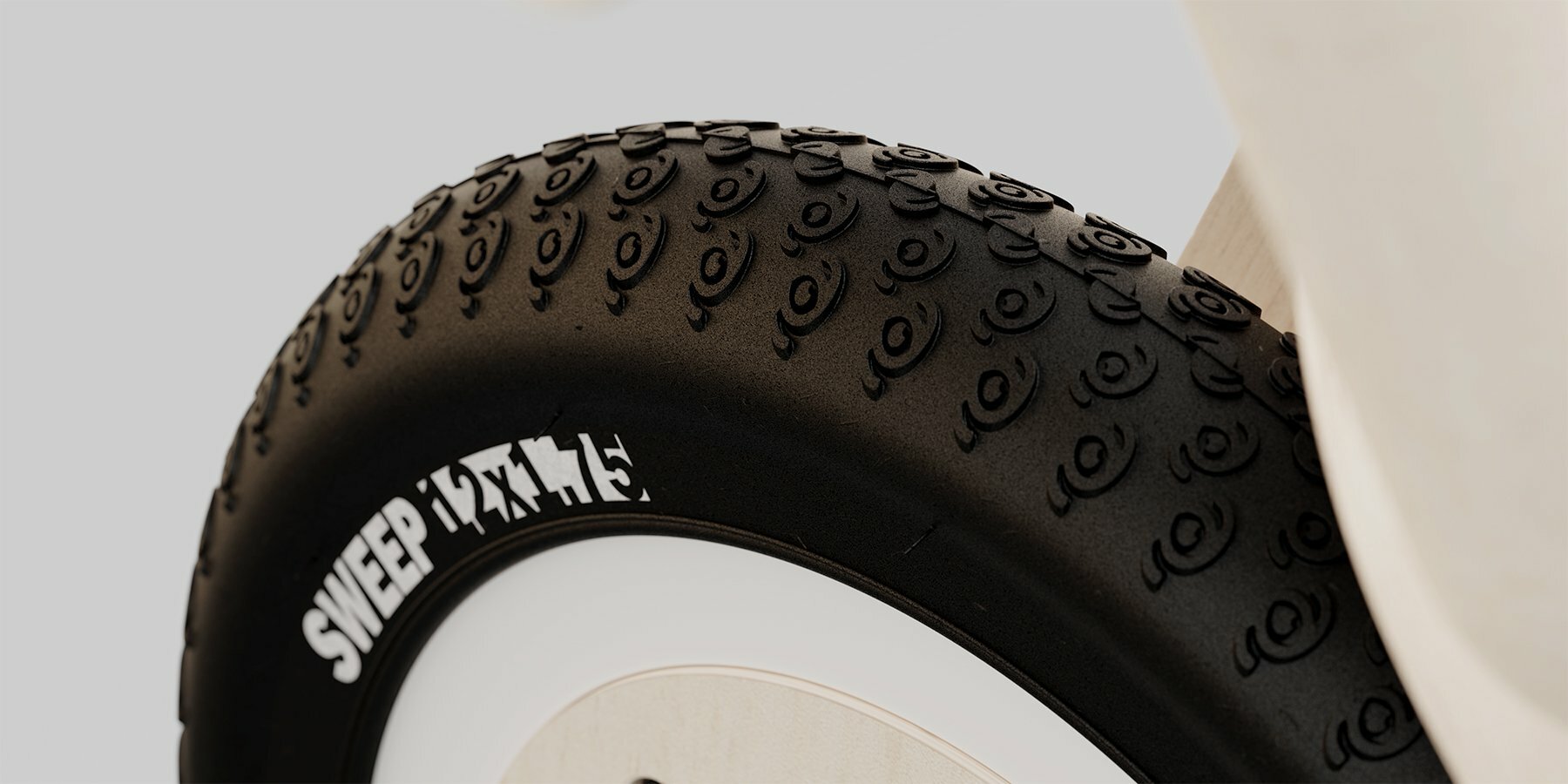