LED or light-emitting diode is a two-lead semiconductor light source. first created by russian inventor oleg losev in 1927, when a suitable voltage is applied to the leads, electrons are able to recombine with electron holes within the device, releasing energy in the form of photons.
anthony james builds LED portals inviting viewers into light matrix
Nov 21, 2019
kollision fuses LEDs with timber to create a 'social temple' at music festival
Jun 20, 2019
these bags light up when open to help you find what you need at night
Jan 23, 2019
kollison sets a colorful lighting installation in temporary tunnels of copenhagen airport
Jun 05, 2018
the danish yoke agency creates a physical object of 196 light beams
Jan 07, 2018 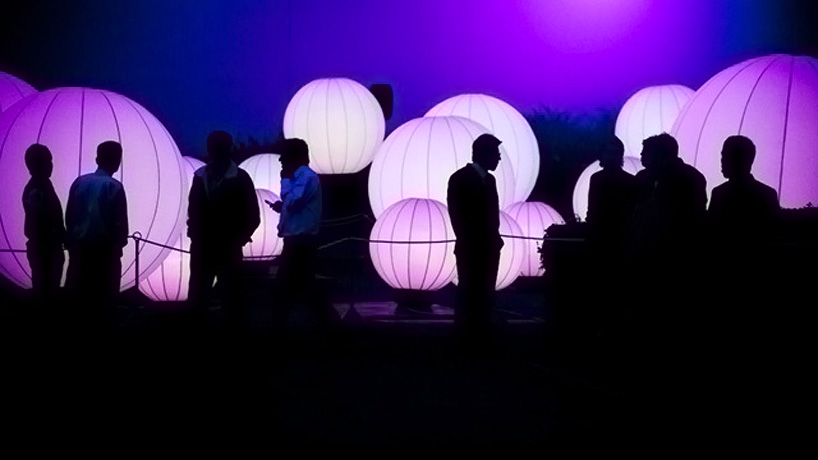 created by british interactive designer dominic harris and his firm cinimod studio, ‘dj light’ is an immersive outdoor installation designed to actively engage the public in the artistic process. open to the public in lima, peru, it was created for the holiday celebrations of the endesa energy company.

the piece invites users to become ‘guest djs,’ who by their body movements orchestrate the light and sound of the entire space. the pavilion is filled by 85 inflatable globes of different sizes, each of which contains a 4-sided LED light strip that controls its color, and eight audio speakers, each on its own output channel. 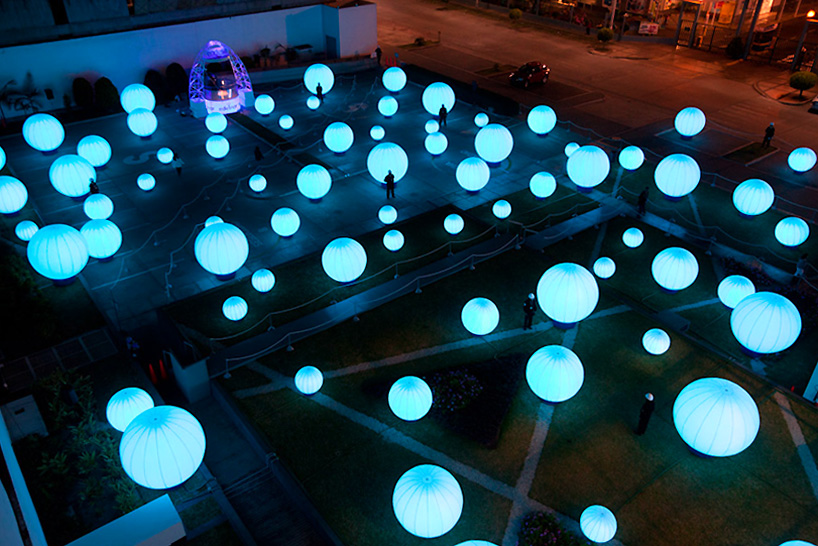 entering an illuminated podium at the front of the space, users find that by simply moving their arms and bodies, they flood the installation with color and ambient sound, generated in response to their activity. the effect is accomplished through a networked system of speakers, thermal cameras, and the light strip array, all integrated by a single master computer program written in max/MSP. 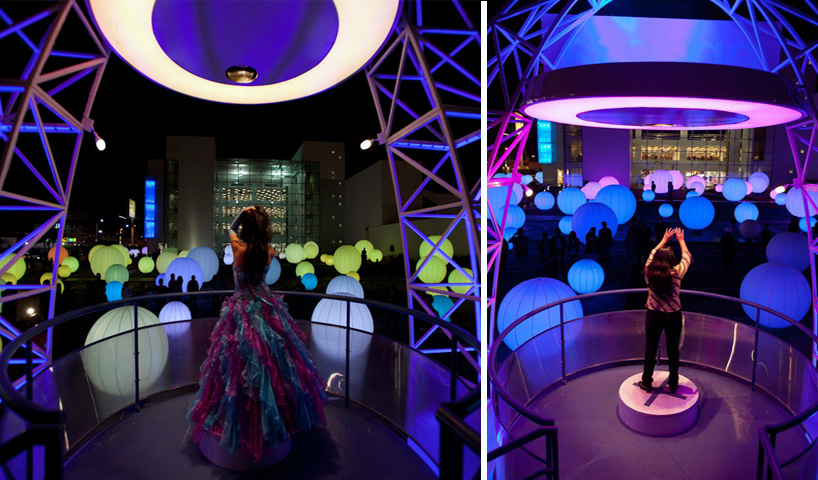 on the dj podium, the movement of users as registered by a thermal camera affects the colors and sounds in the installation

the real-time process begins above the dj podium, where a thermal tracking camera tracks the movements of the ‘guest dj’ and feeds the data to the software controlling the installation.

the program itself consists of four basic interconnected modules: one to process the thermal tracking feed, a second to interpret the tracked movements into mood and scene settings, a third to generate audio relative to the dj’s interaction, and a fourth that controls the color of each globe, based on both the user’s movements and the input from the audio and mood modules. 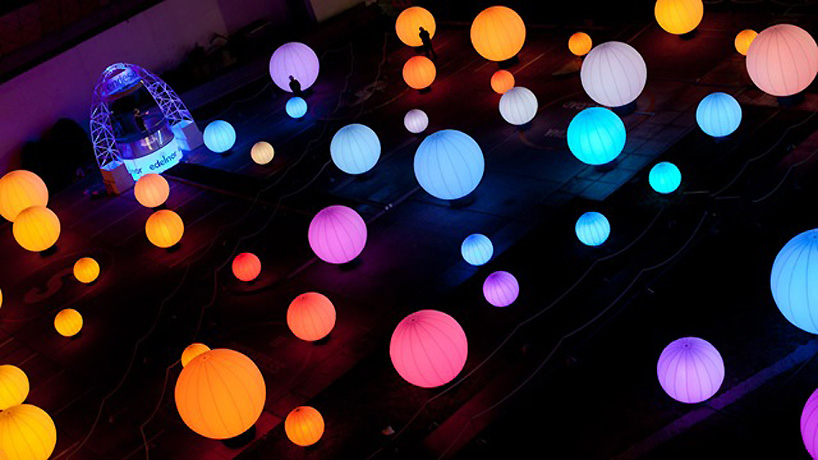 the colour of each of the 85 globes is independently controlled

the project represents years of research and custom development of the requisite hardware, from the energy efficient LED strips to the high-accuracy thermal tracking camera. nonetheless, cinimod studio expresses the hope that the public’s focus is not on the technological achievement of the project, but rather simply on the experience and aesthetic of the artwork itself. 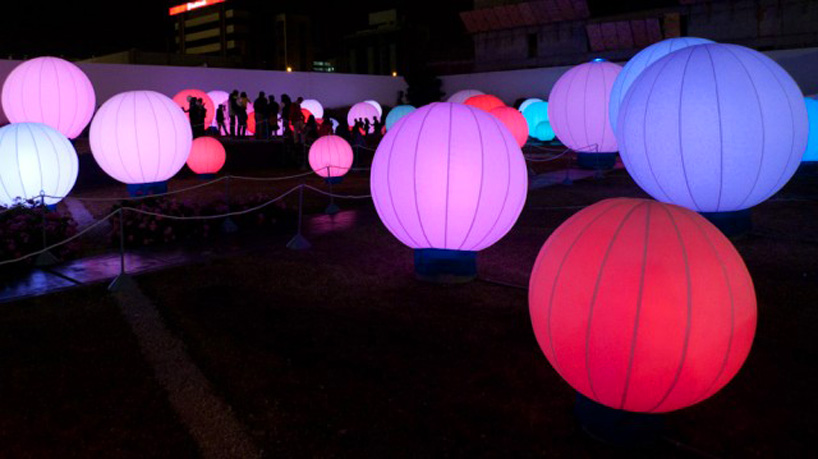 closer view of the inflatable globes

video of the work 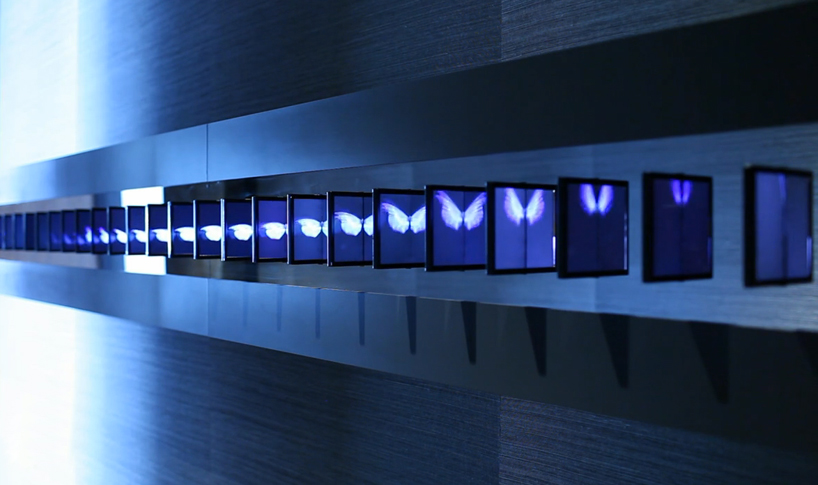 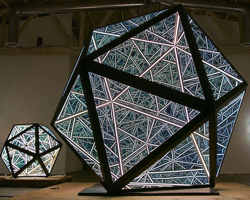 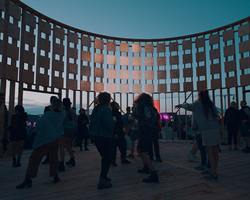 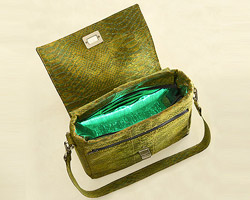