be it conceptual or realized, there’s tons of attention-seeking design out there, but that’s simply it; they do not offer more than that first thought. after looking over some of the recent projects coming out of the MFA in products of design program at the school of visual arts in NYC, however, we noticed several projects that grabbed our attention for the long term. ‘the creation of something deliberately conspicuous is certainly useful – often resulting in the subversion of someone’s expectations,’ remarks department chair allan chochinov. ‘but it’s risky. a punchline isn’t enough, of course, and the best designs not only reframe a difficult problem in a novel way, but also promise an effective medium for delivering an inventive solution.’

with many notable projects on the MFA in products of design program blog, designboom rounds up five of our favorites. 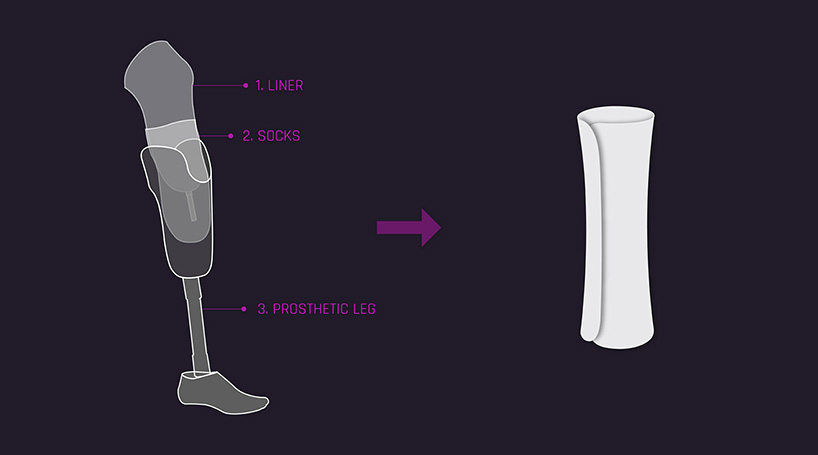 all images courtesy of the school of visual arts

the ‘swift’ prosthetic is part of smruti adya’s thesis project, UPGRADE: designing for access and acceptability around limb loss and limb difference, where she designs products, services, and apps for amputees. the prosthetic is an arm-free crutch for individuals with a below-knee amputation. 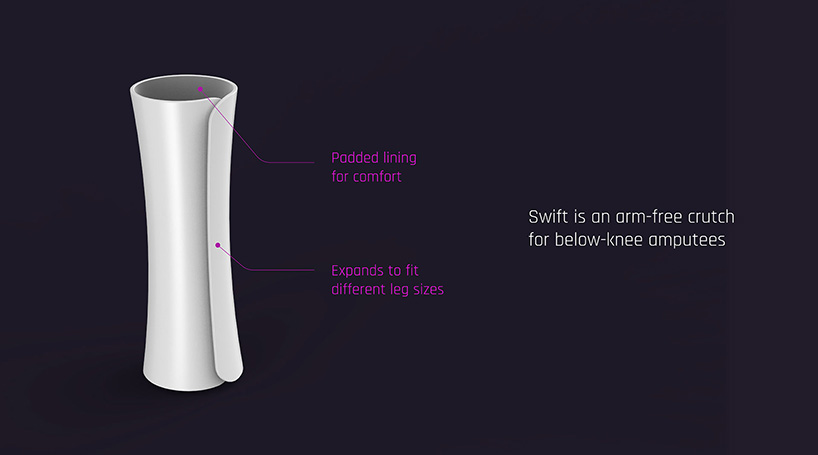 ‘in one of her youtube videos, christina stevens—an occupational therapist and below knee amputee—mentions that she regularly crawls on the floor to get to the bathroom in the middle of the night due to the fact that it takes several minutes to put on a prosthetic leg,‘ explains adya. ‘this lead me to envision swift, which makes wearing prosthetics as easy as wearing slippers. it is essentially an arm free crutch that slips on and off quickly for in-home mobility. while a traditional prosthetic leg requires a liner and perhaps some socks before you put it on, swift eliminates all of that.‘

the designer adds that the product could be easily custom-made and delivered using 3D printing, or mass manufactured in multiple sizes and distributed through traditional and online retail. 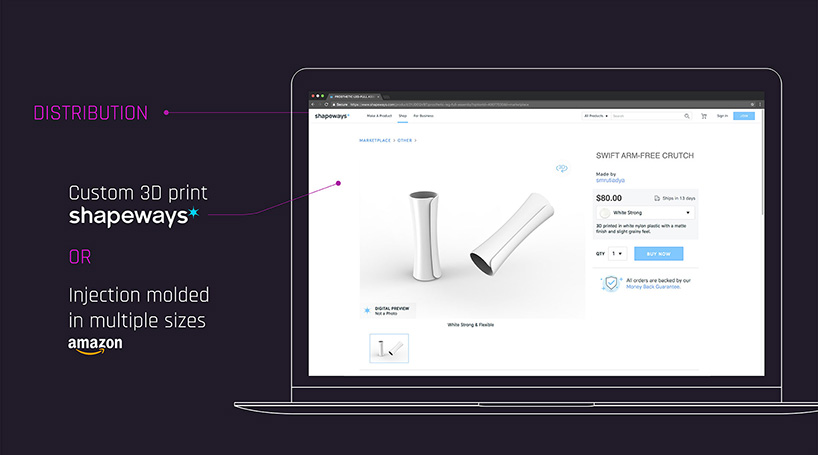 CARA – from the word ‘carapace’, the shell of a turtle – is a menstrual product and waste carrier designed for use in multi-day trips outdoors. it features an expandable waste collection container at the center, and two separate dry enclosures at the top and bottom to keep unused menstrual products, toilet paper, and clean wipes. 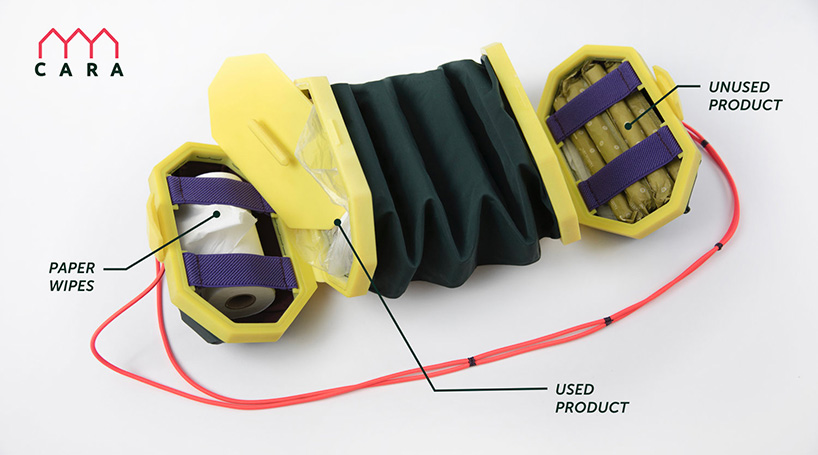 from the onset of alexia’s masters thesis, DARE + DEFY: a woman’s place in the great outdoors, it became clear that women are incredibly dissatisfied with the design of outdoor gear. the designer decided to challenge the ‘shrink it and pink it’ design attitude towards female products, and truly expand the typology of tools for women beyond the superficial to fulfil functional needs. 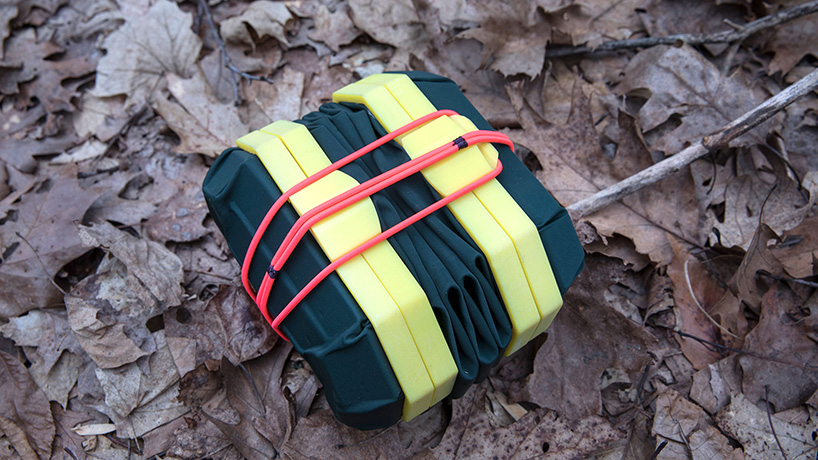 after contacting women hiking communities online, alexia quickly discovered that there was nothing on the market designed specifically for this purpose. with women engaging in outdoor adventure in greater numbers, this became her design opportunity.

babygym is a piece of critical design that explores a hyper-masculine concept for fathers – a way to spend time with their newborns by using the baby as weight during lifting exercises. the hilarious but thought-provoking project was part of andrew schlesinger’s thesis work, GENTLEmen: challenging adults to raise feminine boys. 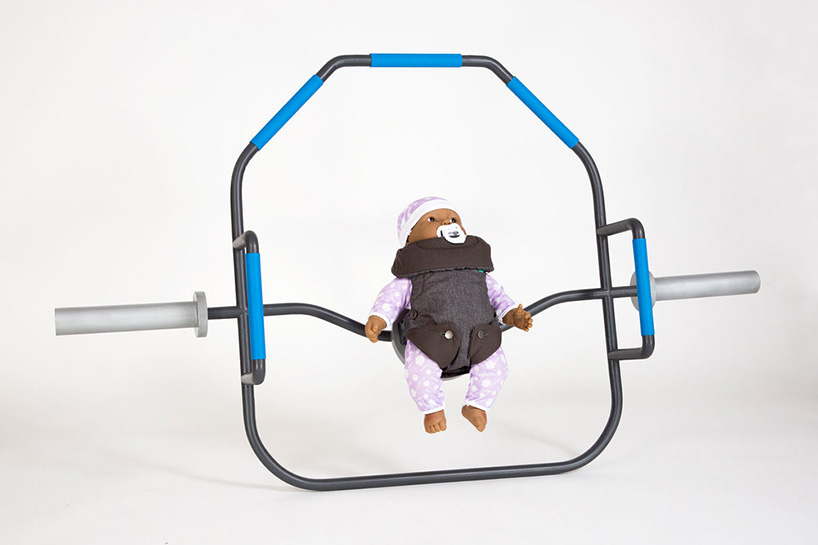 in the form of an ‘infomercial’ spoof, ‘babygym aims to provoke a meaningful discussion on what it means to be a father today and ask why it is not normal for dads to engage in caring and nurturing activities with their child,‘ adds schlesinger. there are many products and services for mothers to bond with their infants – baby-yoga classes, jogging strollers – so the designer crossed the line of reasonableness.

one of the products in manako tamura’s masters thesis, hacking the racial binary: design provocations for identity and shame, takes a look at code-switching. this is the practice of shifting the ways one speaks depending on context, such as when one changes their accent to sound more like those around them to fit in.

‘I wanted to explore ways in which a mobile app might interact with the ways immigrants present themselves through speech,’ explains tamura. ‘code-switching is an everyday experience for many immigrants, and it often happens involuntarily and quickly – without the speaker recognizing the change.’

‘after a lot of iteration, I decided to reframe switch as a habit-changing app. here, it sends the user nudges when they’re speaking in one manner for a certain period of time – thus encouraging them to push the boundaries of their comfort zones and try speaking with the other accents. its goals are to encourage users to embrace the multitude of their identities, and feel more comfortable expressing themselves authentically regardless of context.‘ 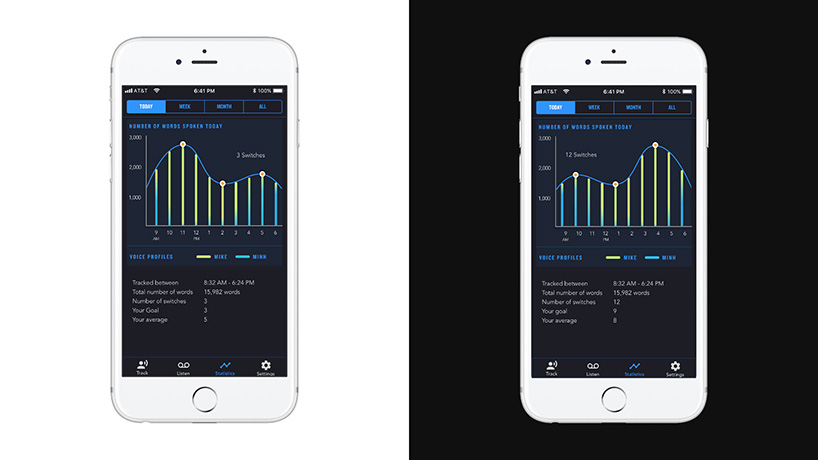 with potential to partner with other companies, switch’s tracking system could share useful data and help expand hardware to challenge trends toward whitewashing in technological development. by implementing smart eyewear, for example, the app could track not only variations in speech patterns but also the visual elements of certain interactions that trigger code switches. furthermore, sharing data with developers of smart devices such as amazon echo or google home, switch could aid in the development of multicultural AI ‘voices’ that immigrant users would feel comfortable interacting with in their own homes.

netflix reveal is a software extension that temporarily removes selected movies on your stream that are created by ‘immigrant’ or marginalized individuals. ‘netflix reveal makes the invisible visibly by illustrating what the world of entertainment would look like without the significant contributions of people from around the globe who make our movies and TV shows,’ argues schlesinger. for the shows that are still available, the designer added a map in the detail screen to show all the different countries where the director, editor, and actors are from. 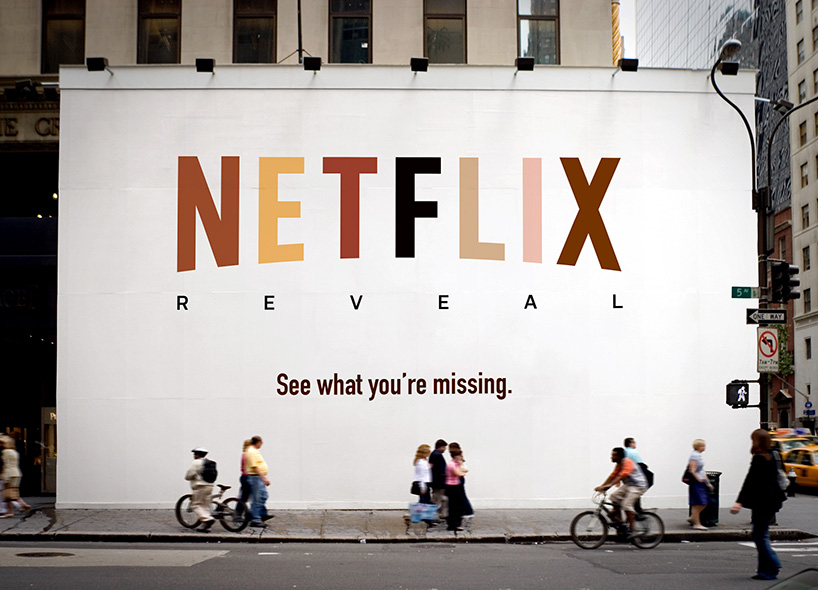 the netflix reveal project was part of a summer partnership with the omidyar network, where MFA products of design students created interventions around the topic of ‘independence’ using design to address one of society’s most pressing challenges: our increasingly polarized personal and political landscape. 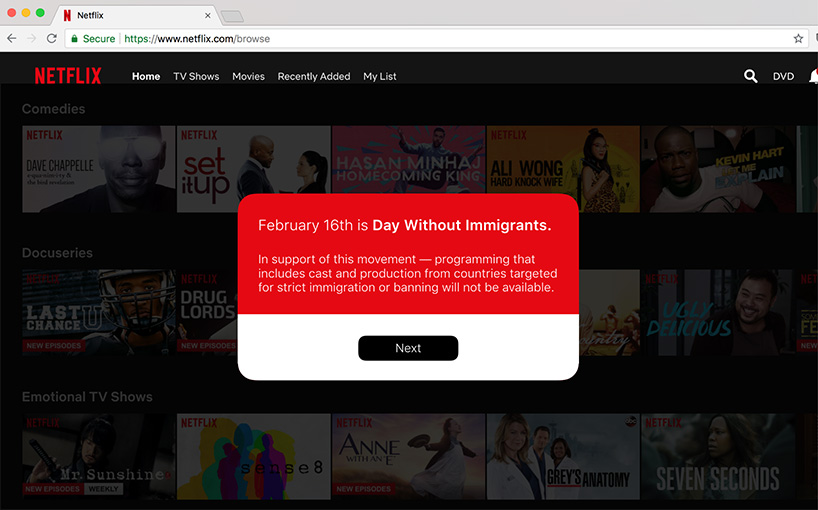 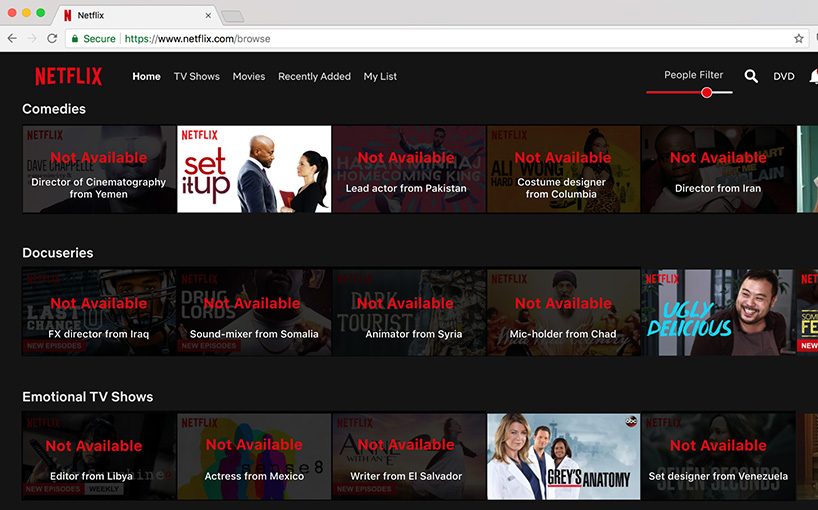 ×
keep up with our daily and weekly stories
508,118 subscribers

keep up with our daily and weekly stories
508,118 recipients