‘curved twist’ is an installation created by designers fay mccaul and kia utzon-frank for the 2017 edition of london’s collect international art fair. the large scale piece represents a collaboration between the duo that combines mccaul’s penchant for materiality and color with utzon-frank’s innovative ‘louver twisting comb’ mechanism.

standing at two and half meters tall, ‘curved twist’ finds its origins in utzon-frank’s cordless shutter system, designed as an alternative to conventional window blinds. called the ‘KUFtwist, the system works by attaching movable modules to slats of fabric that ‘twist’ the fabric when moved, reorienting the slats from an open to a closed position. mccaul, meanwhile, works in textiles — combining contemporary materials with traditional knitting methods to create light-reactive pieces that change depending on luminosity and perspective. 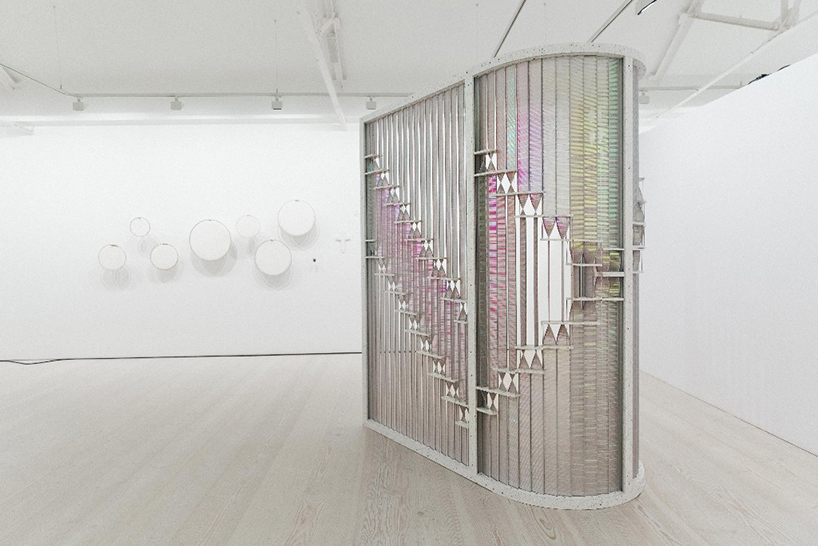 ‘curved twist’ will be displayed at london’s saatchi gallery until the conclusion of the collect art fair on february 6th, 2017. to create it, mccaul has knitted a series of 42 italian cotton ribbons (8cm x 250cm), each housing 484 laser-cut acrylic rods, coated in light-reactive dichroic film and inserted by hand into specially knitted pockets. with 2,904 rows of cotton per slat, mccaul has manually knitted 121,968 rows and pockets for 20,328 rods – making curved twist one of the most demanding pieces of her career. 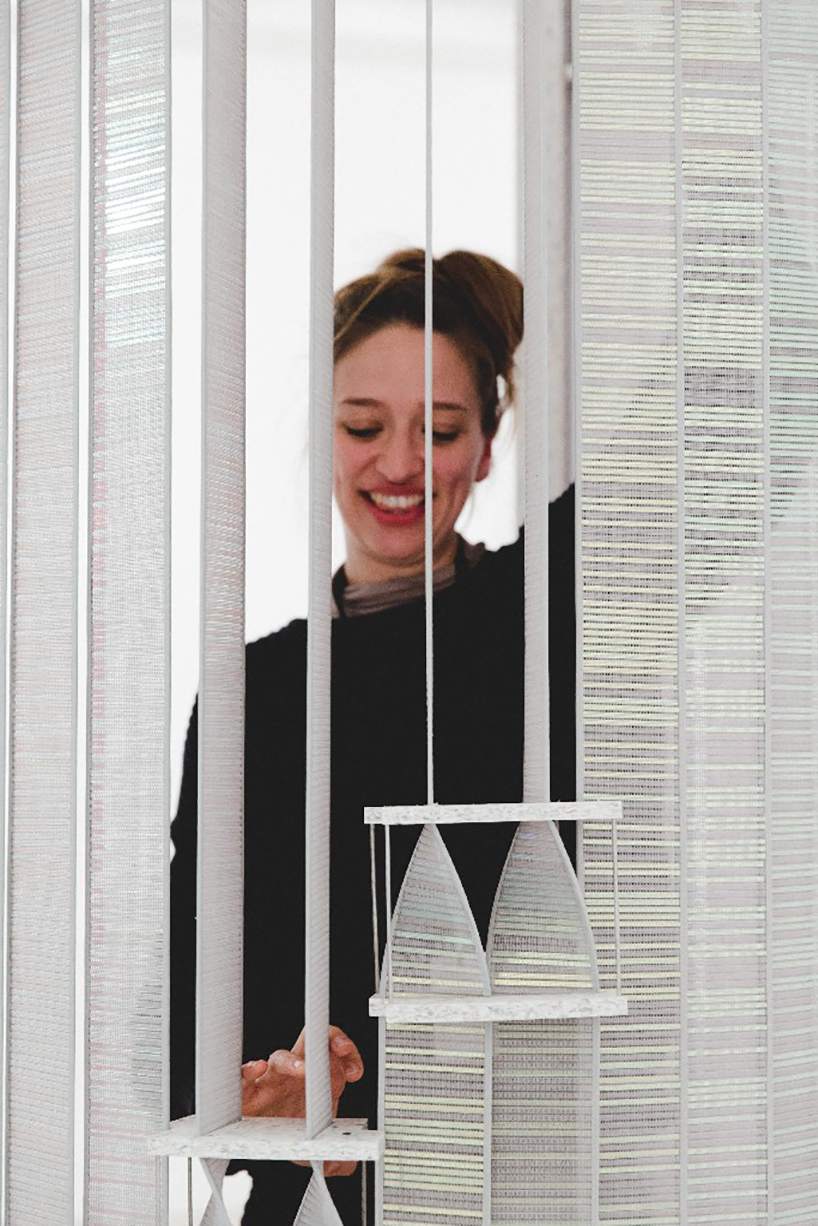 as each module is moved by hand the fabric is twisted along its length, creating a fluctuation of color and form that the duo hope will immerse viewers in its kaleidoscopic surfaces. ‘it’s a frame shaped structure that curves into a J shape (…) and the idea is that someone can stand in the curved bit and be immersed within the installation entirely’, explains mccaul. the modules, and the structures overall cladding, are made from recycled yoghurt pots from smile plastics that lend a shimmering silver hue to the project. ‘we both work with our hands and we people to interact with it’, says utzon-frank, ‘we want people to be able to touch and play with what we do.’ beyond the exhibition, the designer sees the mechanism being used in a multitude of situations including room dividers, façade systems and bespoke installations. 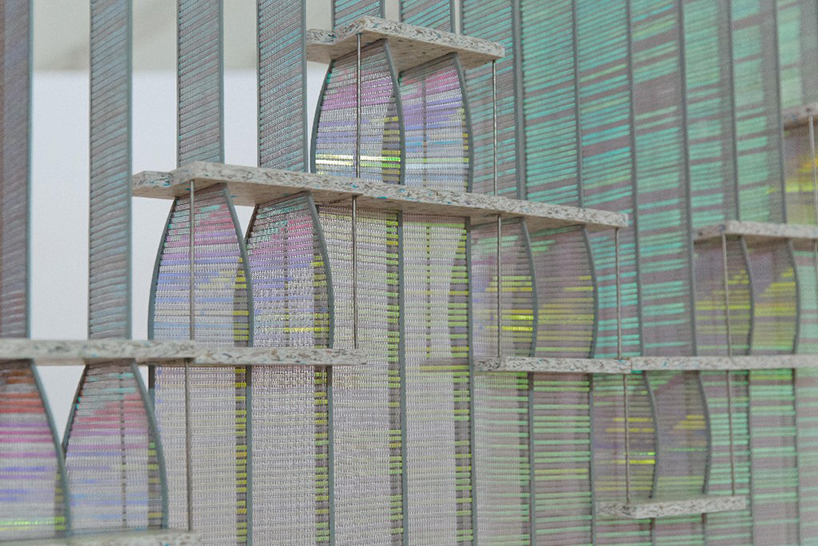 as each module is moved by hand, the fabric is twisted along its length
image by dunja opalko 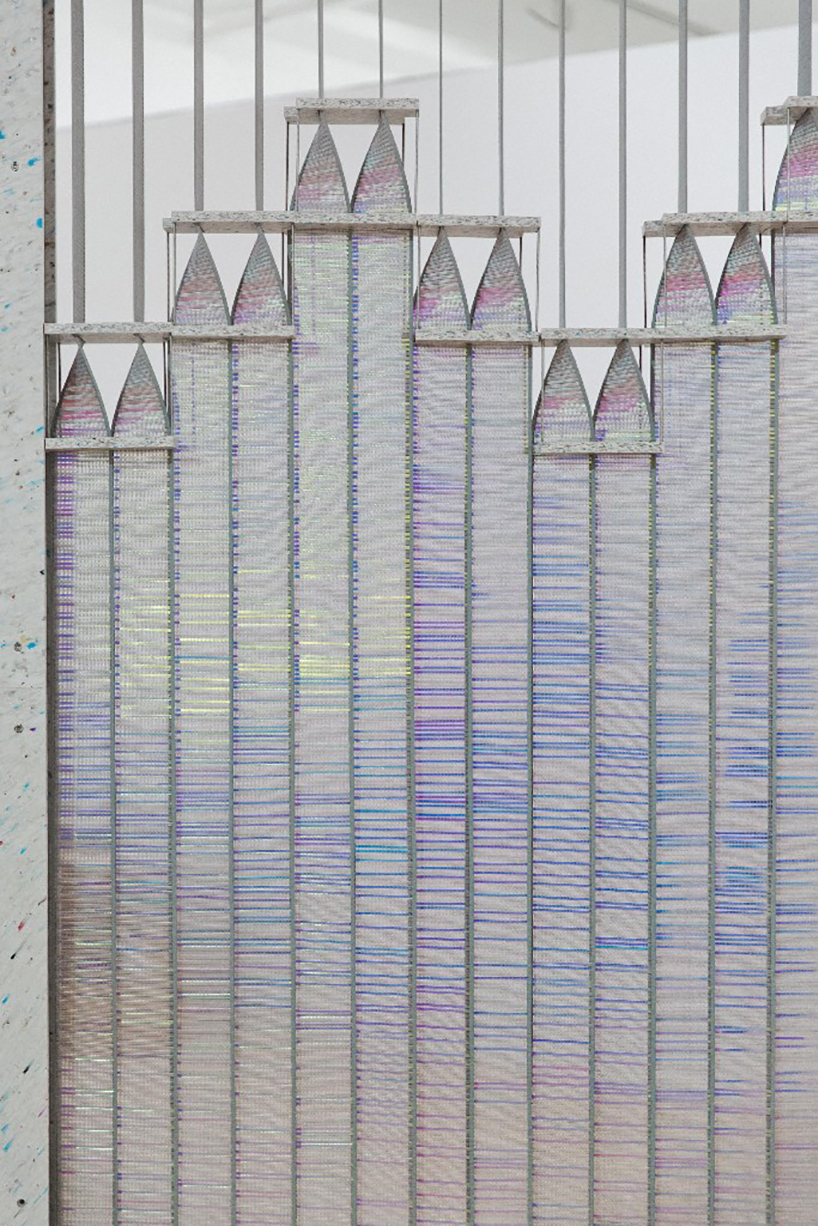 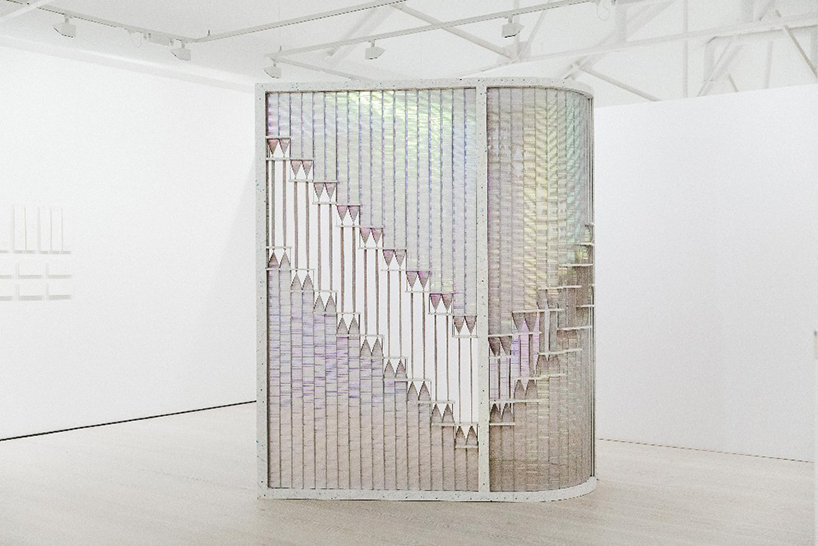 the modules, and the structure’s overall cladding, are made from recycled yoghurt pots from smile plastics
image by dunja opalko 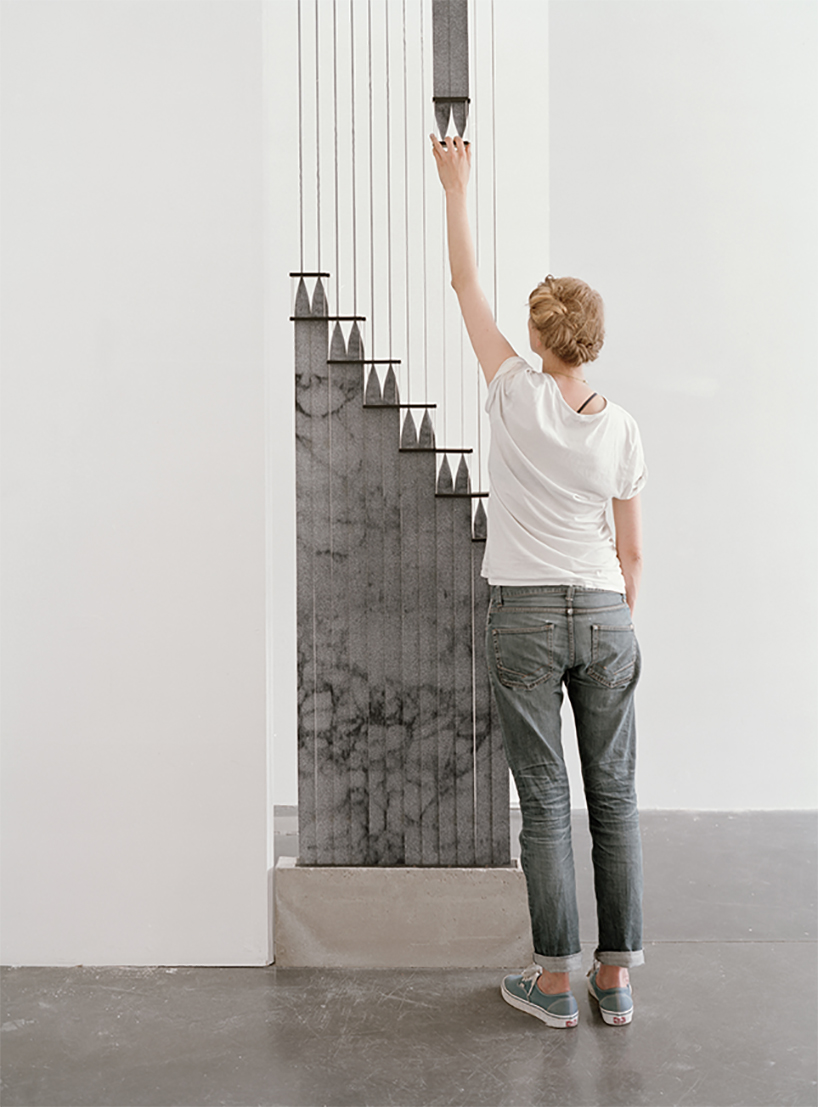 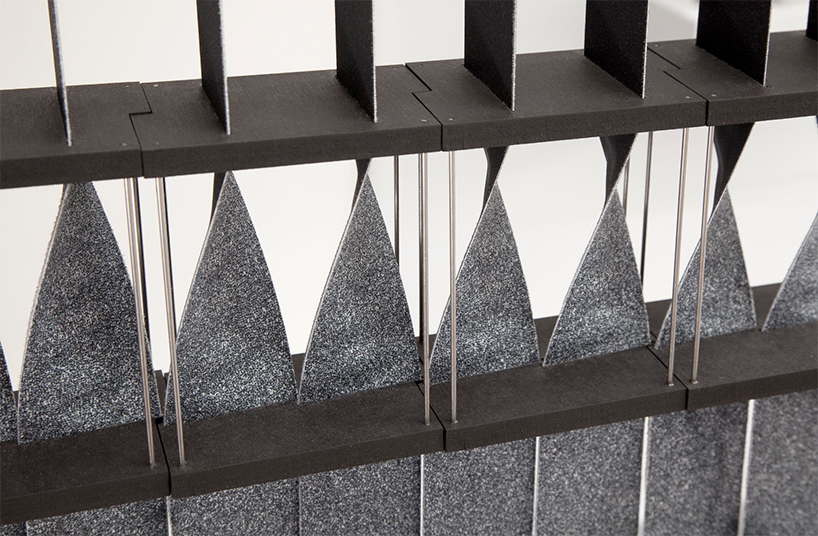 the designers imagine it being used in room dividers, façade systems and bespoke installations
image courtesy of KUFstudios 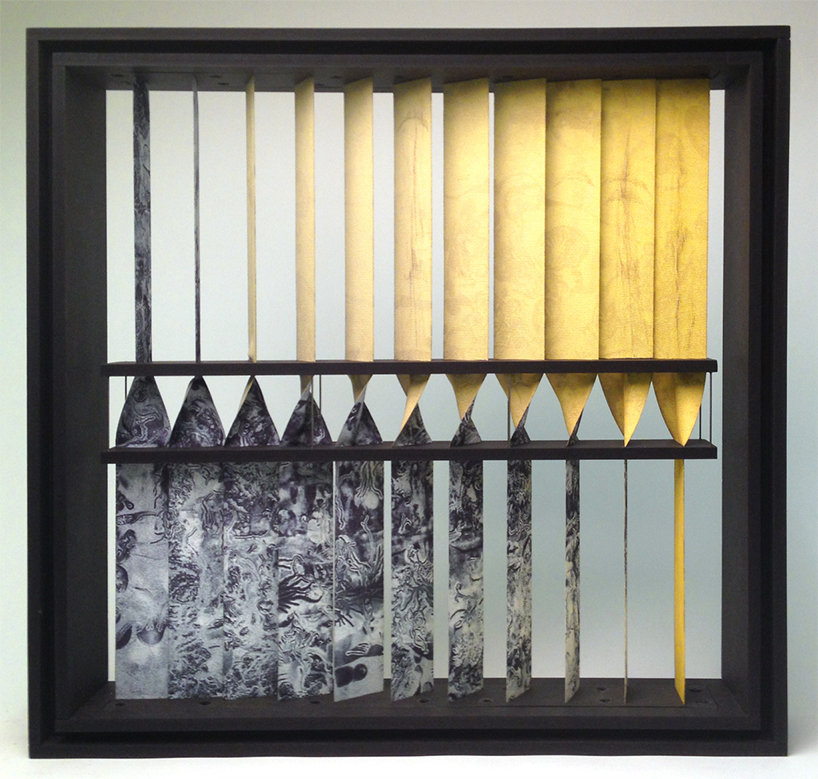 combined with different materials, the effect can be mesmerizing
image courtesy of KUFstudios 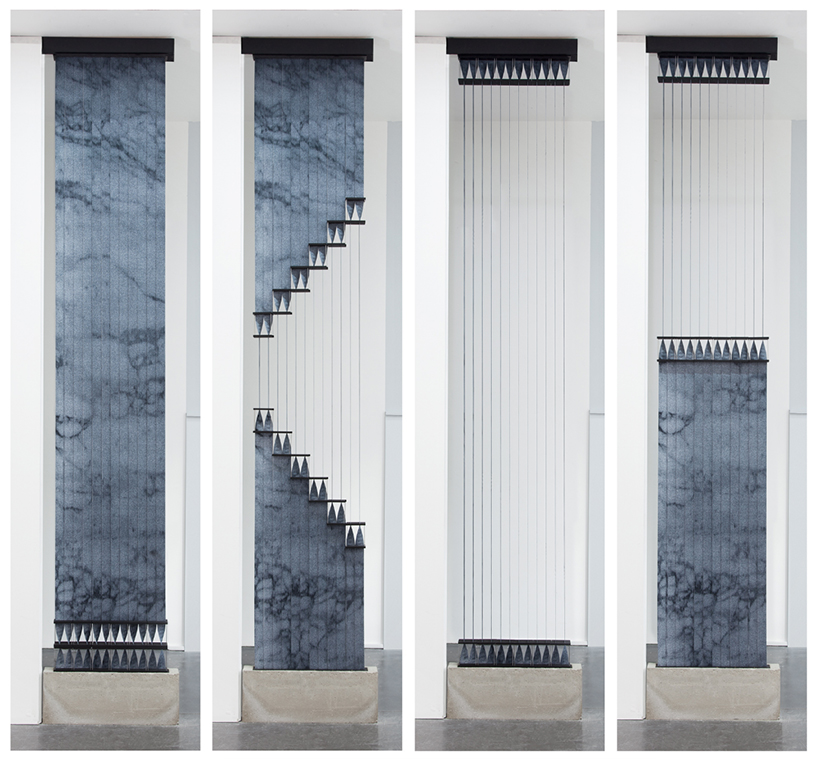