a year ago, todobarro – a producer of handmade terracotta tiles – asked damián lópez of LEBLUME. and carlos jiménez to rethink the terracotta tile. the designers responded with two collections that both pay homage to the spanish brand’s roots and bring a fresh perspective to an ancient material. for the vélez collection, lópez looked to the architecture of todobarro’s home city, málaga, while jiménez revisited costa del sol in the 80s for nerja. 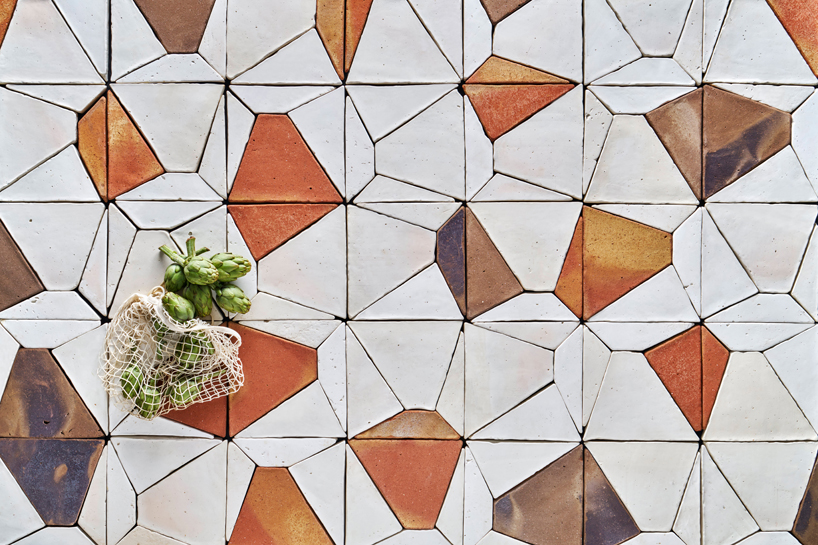 ‘when we started looking for inspiration, we both decided that we would think about málaga, where todobarro was born and where all the pieces are handcrafted,’ says carlos jiménez. 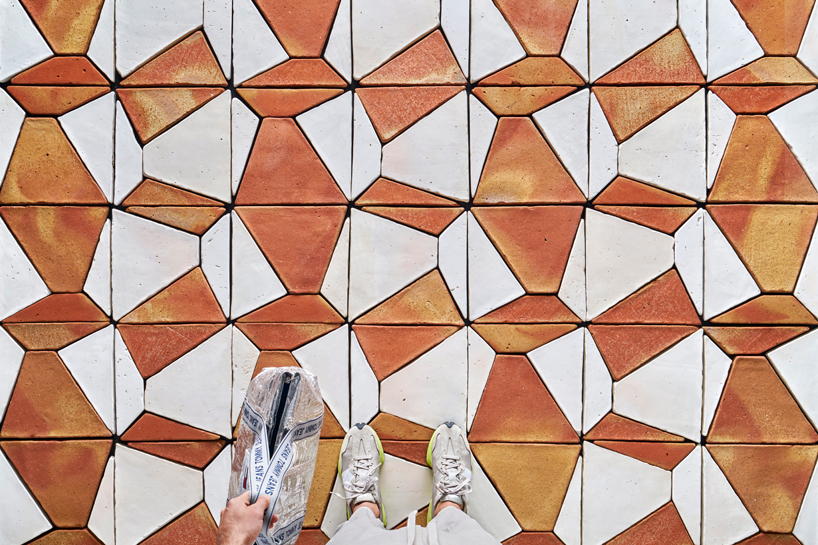 carlos jiménez’s concept was inspired by the way of living on the costa del sol during the 1980s. ‘when looking for inspiration, I was always ending up in references to the TV show verano azul, which was filmed in nerja at that time. I watched some episodes and I started thinking about the idea of terrazzo, which was really common in those days.’  the proposal creates irregular geometric patterns that break with the mathematical perfection of the more classic tessellations from the todobarro catalog. 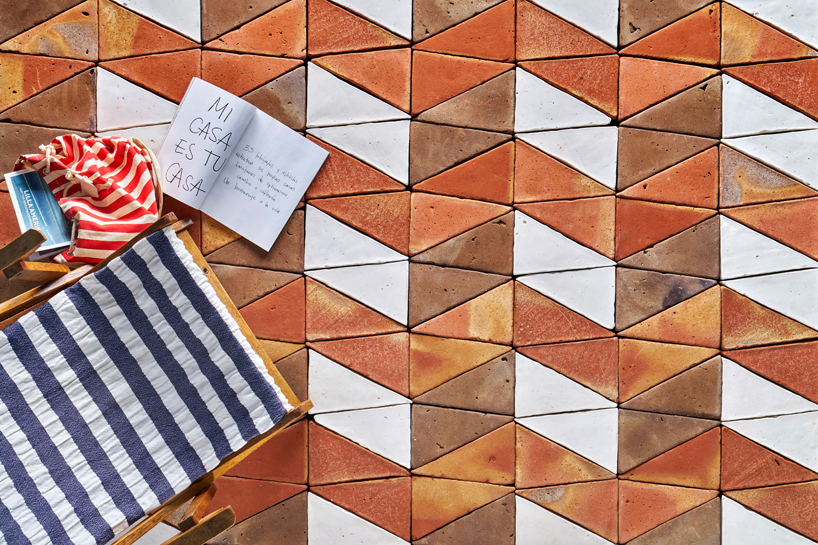 nerja collection: you can make beautiful compositions with just one shape

nerja consists of four irregular geometric pieces, two triangles and two trapezoids. when these shapes are combined together, they can create 10 different irregular polygons. this irregular structure is perfect when trying to simulate the randomness of terrazzo. apart from these tessellations, the collection also affords many other patterns: from geometric compositions with a vintage aesthetic to more classic styles with new details. 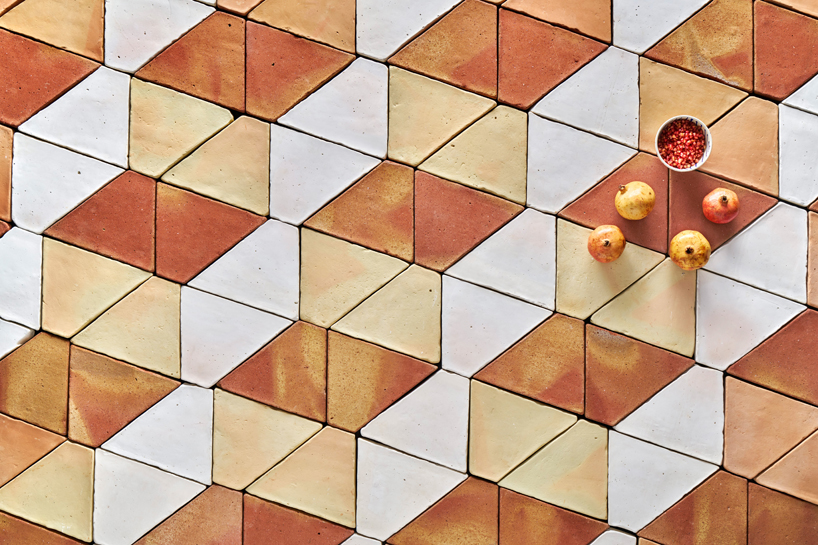 nerja collection: a composition created with just one of the four pieces

damián lópez, founder of LEBLUME., thought about a small tribute to his origins and the company’s origins. the designer was inspired by forms found in different elements from the traditional architecture in vélez málaga, the town where todobarro’s factory is located. ‘looking at these buildings I found that both circles and arcs were very frequent.’  using these formats, he imagined a new world of possibilities where curves take center stage, breaking with the classic straight lines of todobarro’s catalog. 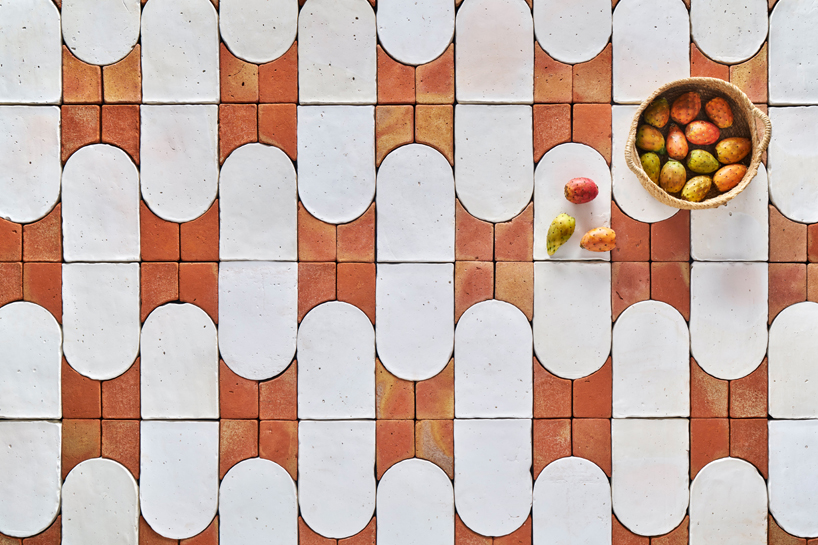 vélez comprises six different pieces. when combining these terracotta tiles customers can get compositions with a contemporaneous and avant-garde aesthetic. some tessellations evoke an art nouveau style while others make you think of 60s psychedelic. 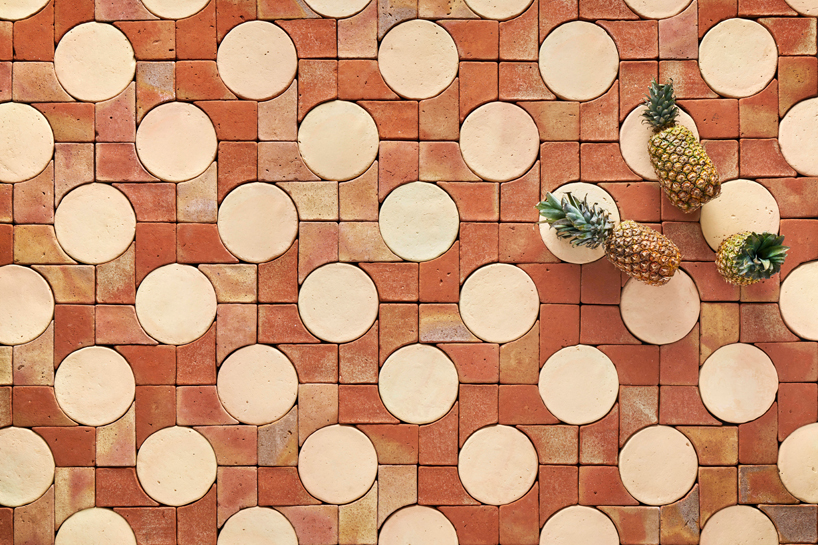 vélez collection: tessellations can be made with just a few different pieces

after the first sketches, molds for the prototype phase are 3D printed. then, the terracotta is prepared and the artisans make the pieces by hand. after that, the tiles need to dry for several weeks before they are fired for seven days in an arabian oven. this means that to see the first prototypes, the designers have to wait around 40 days. 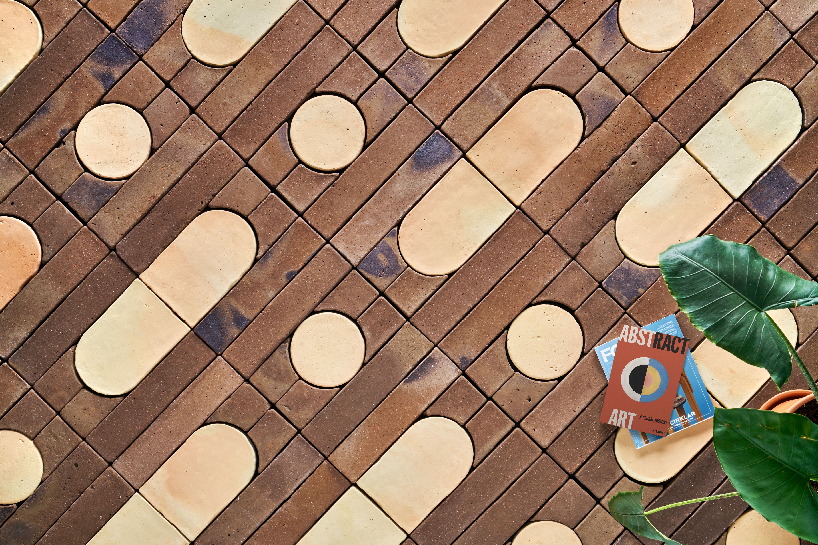 vélez collection: a mix of curved and straight lines

after that, the designers begin creating different patterns for each collection. and with five terracotta hues to choose from, the possibilities are almost endless. the result of this collaboration are two unique collections that answer the same briefing in very different ways. 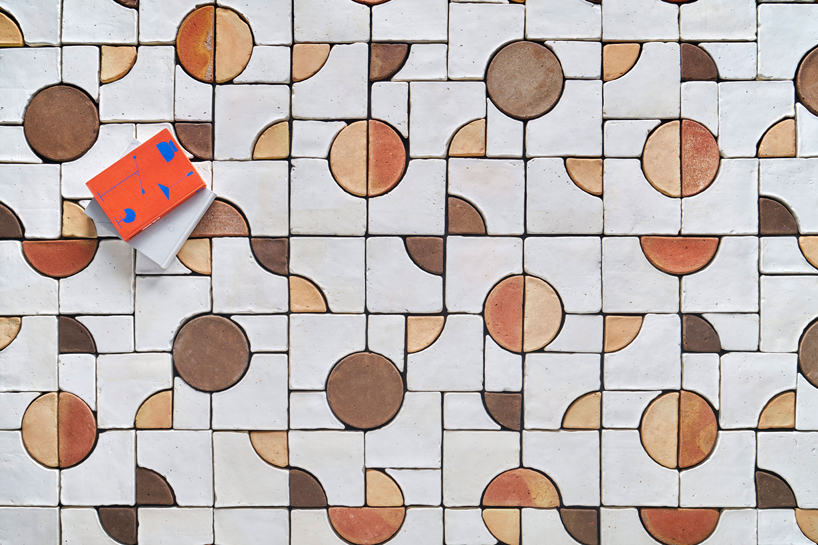 vélez collection: using the same pieces, tessellations can be traditional or futuristic vélez collection: every terracotta tile is handcrafted in málaga, spain 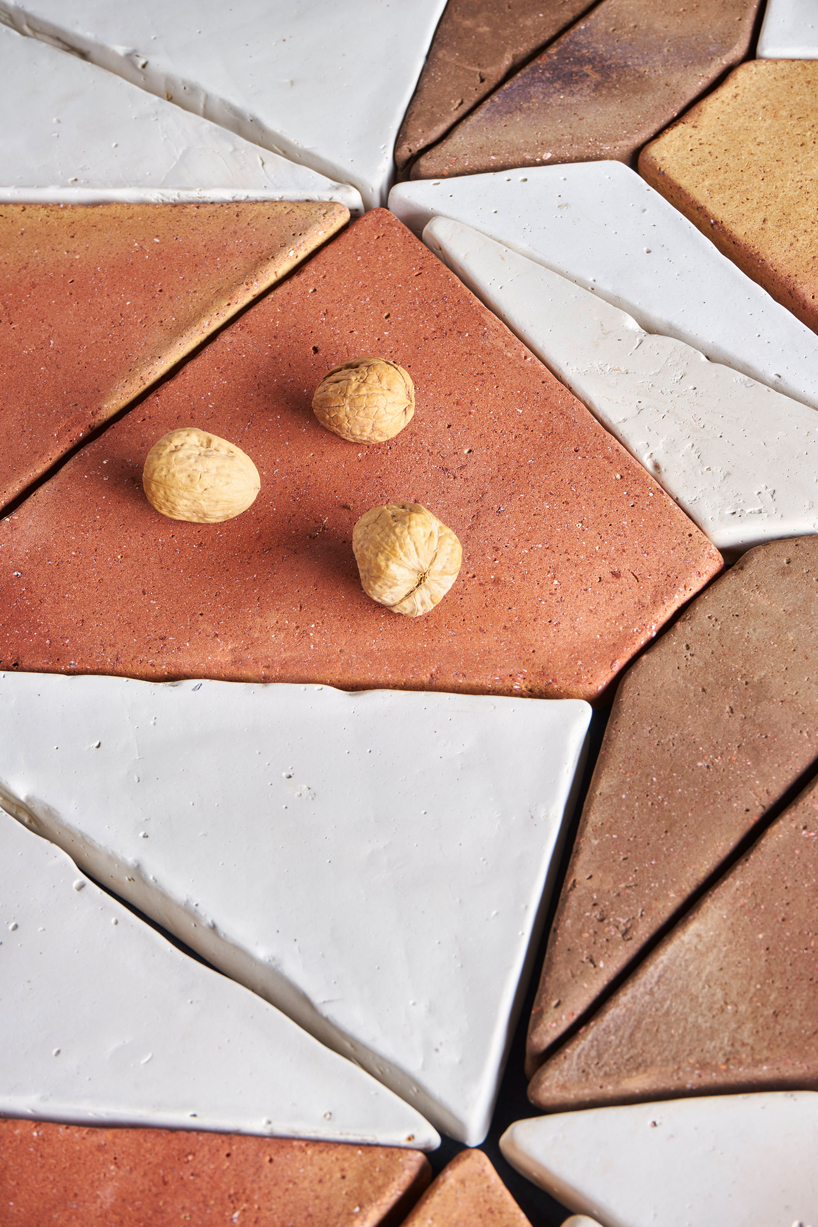 detail of the terracotta tiles from the nerja collection 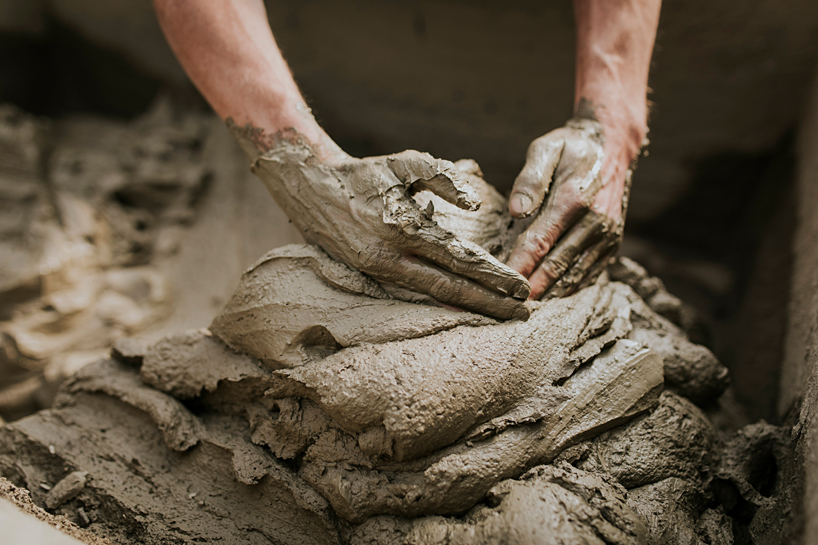 the artisans make each piece by hand 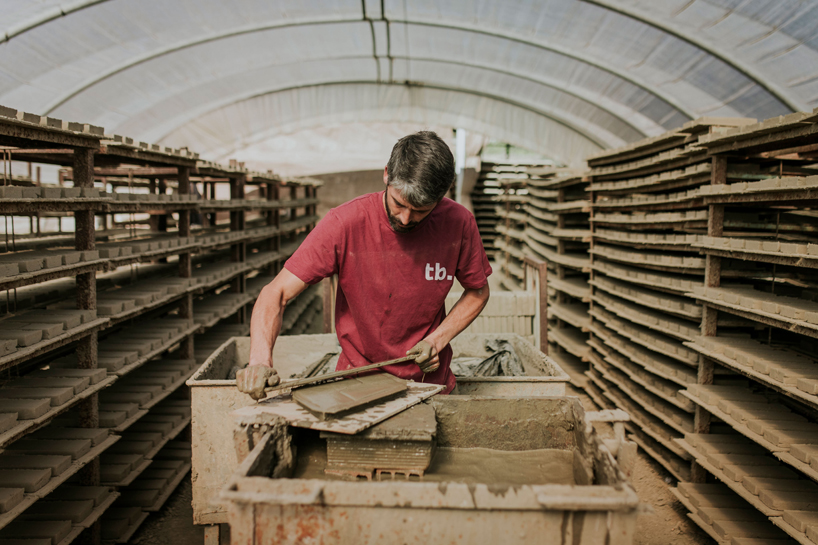 the terracotta tiles are fired in an arabian oven