the delorean first came to fame when scientist emmett l. brown transformed the vehicle into a time machine in the ‘back to the future’ trilogy, despite the automotive company having stopped production before any of the films were made. and now, here in the present, delorean is making its comeback, this time as a two-wheeler — a stainless steel frame bike designed and hand-made by sarto antonio racing bicycles in pianiga, italy.

the idea for the delorean bicycle was conceived similarly to the delorean car itself and began with a conversation between stephen wynne of the delorean motor company and marc moore, passionate cyclist and former delorean owner, who together wanted to construct a vehicle which expressed style while still offering innovative features representing a value for both bike professionals and hobbyists alike.

the first of the three bikes set for production is the ‘delorean anyday’, which will be followed by the ‘delorean speed’ and ‘delorean cruise’. the material to build the bike was an obvious choice; composed of columbus HINOXtube™ trafitubi XCr seamless triple-butted patented stainless steel tubes made in italy, maintaining the delorean connection. the ‘anyday’ has a clean running belt drive transmission which makes it easier to climb bigger hills or go faster on flat roads with the help of an integrated 11-speed internally geared hub that comes as standard equipment.

front and rear hydraulic disc brakes, whether in wet or dry conditions, make stopping power more than sufficient. standard equipment includes an 11-speed internally geared hub. the wheels are covered with an illuminescent coated which when under regular lighting looks dark, but when actually shone upon, they almost appear to ‘turn on’ making visibility in low light or at night better, along with making your late evening or early morning ride a lot safer. finally, an italian made gel saddle enhances one’s riding comfort, and a full carbon fork  provides precise steering response, and has been constructed so that there is enough room for one to install larger treaded tires for dirt roads or path riding.

up close look at the bike driving belt

up close of the drivetrain

detail of the drivetrain 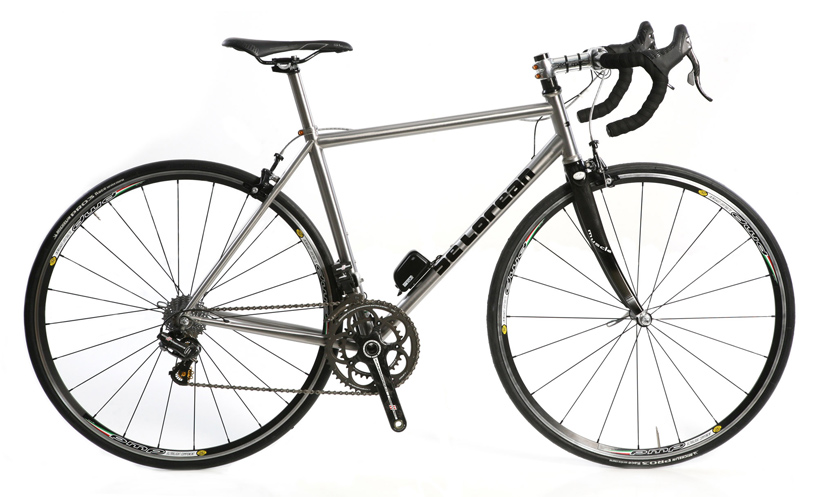 up close of the stainless steel frame

up close of the bike cranks