dharavi is a three-square-kilometer urban village located in the heart of mumbai. considered to be one of asia’s largest ‘slums’ — a generic word that sadly ignores the village’s vibrancy, complexity and dynamism — dharavi is home to around 1 million inhabitants that form a community of resourceful, creative and resilient people. despite difficult living conditions and a high density population, locals that inhabit this user-generated neighborhood design, manufacture and commercialize all kinds of crafts and goods. 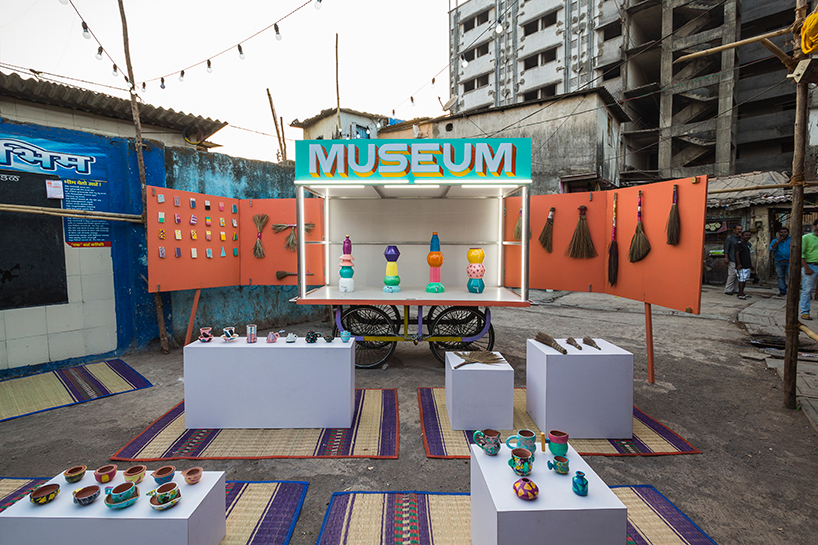 in february 2016, a nomadic exhibition space opened its doors in dharavi. traveling by pushcart, similar to those used by locals to distribute and sell goods, design museum dharavi was set up as a platform for makers to present their products to the community, the city of mumbai and, in turn, the rest of the world. initiated by amsterdam-based artist jorge mañes rubio and art critic and curator amanda pinatih, the main mission of the program is to use design as a tool to promote social change, to create a meeting point for cultural exchange and innovation, and to challenge the negative perception of informal settlements around the world. 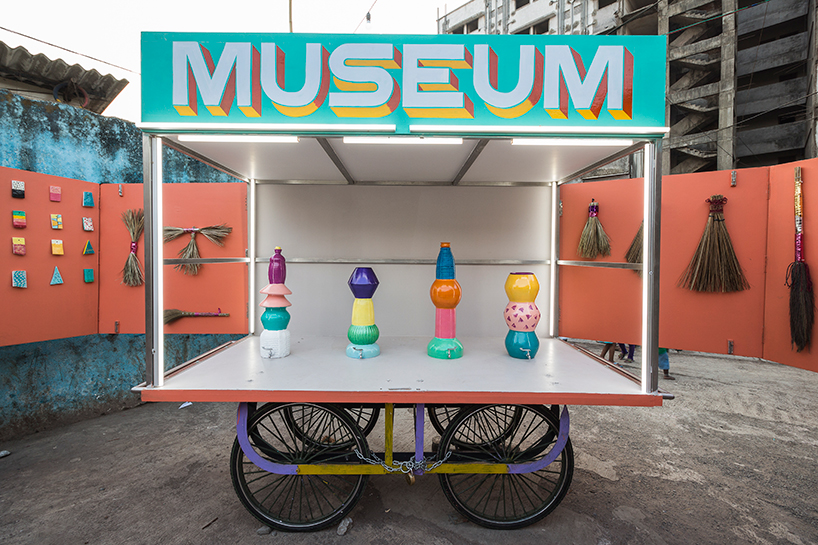 the museum engages with local makers in new collaborations, delving deep into their traditional artistic practice, history and culture. the exhibited objects reflect new creative directions for these participants, portraying their identity, and that of their community, in surprising and original ways.

the first of several workshops and exhibitions was inspired by local themes and everyday symbols, such as chai tea, water containers and brooms. featuring mostly ceramic pieces, the show considered the tea-drinking culture of the community, and asked locals to fathom new ways to drink and hold their beverage. 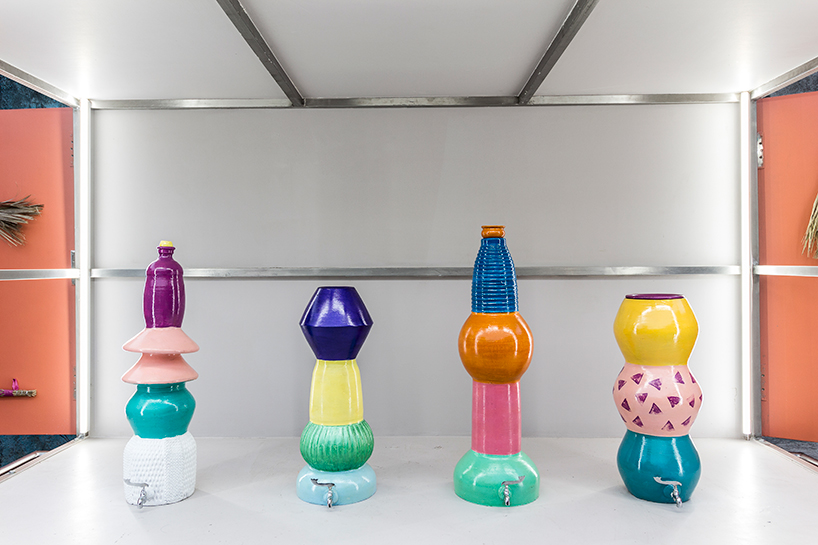 rubio and pinatih worked together with potters nathalal n. chauhan and mitul n. chauhan, father and son, whose family business in dharavi goes back several generations. rather than commissioning new pieces from them, the duo spent time with the family, thinking and discussing new ideas. since most containers are bulky and cumbersome, leaving little room for improvisation or design (see images in the gallery below), together the team decided to create new typologies for chai and water vessels. 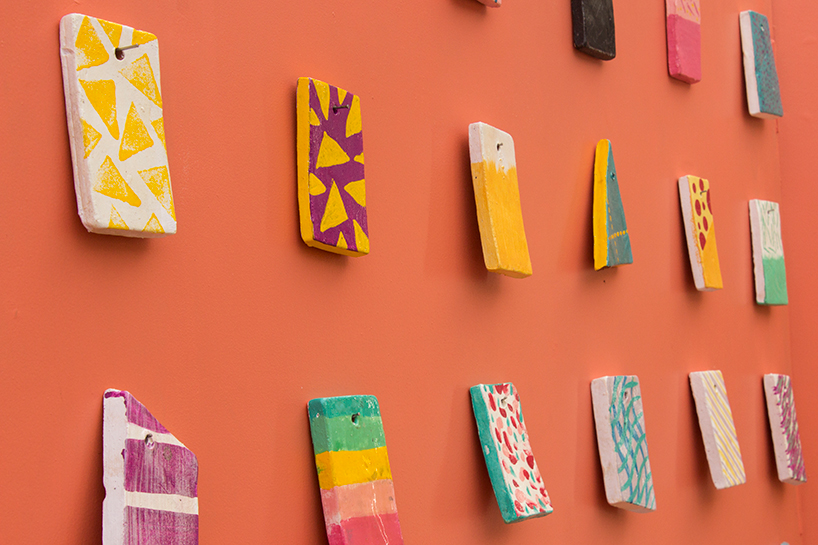 ‘we loved the way the family stack pieces in their workshop (space is precious!) so we used that idea to create taller water containers,’ rubio and pinatih describe. ‘we were also interested in exploring new aesthetics, so we decided to go in the opposite direction that these potters usually decorate their pieces, which usually demands a lot of time, different colors, and very intricate and complex decorative motifs.’

‘we wanted to use color in a similar way that people use it in dharavi to paint their homes, doors, courtyards…to use colors in a more ‘massive’, free and simple way. it’s quite curious that some people pointed a resemblance between these pieces and the work of memphis and ettore sottsass in particular. because ettore’s work was so heavily influenced by india and its colorful architecture as well. ‘ 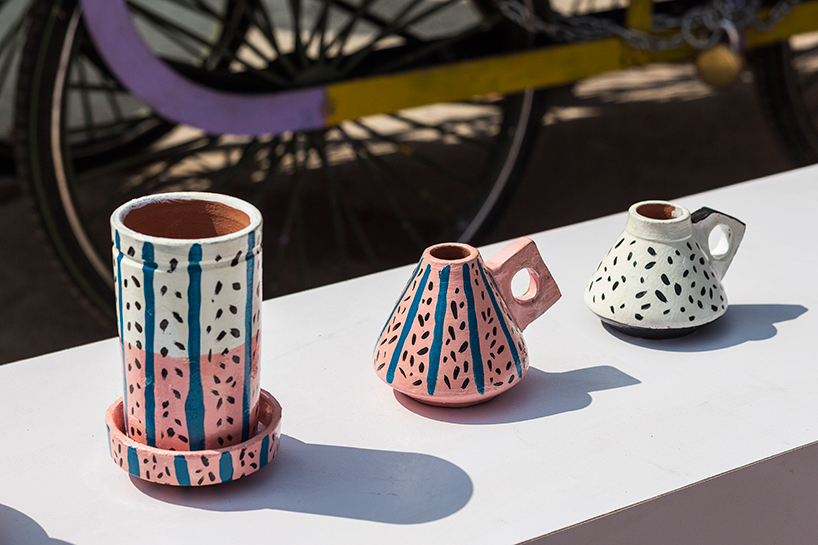 throughout the duration of the exhibition, people traveled to dharavi from all across mumbai (some for the first time) to see the pieces — even to buy them. while the exhibited objects were not for sale, rubio and pinatih connected curious customers with the chauhan family, who were happy to receive their first commissions. the city of mumbai, india’s financial capital, offers endless economic opportunities, yet it is dharavi that offers them a home. now, with the dharavi design museum, there is a chance to showcase their creations to the world. 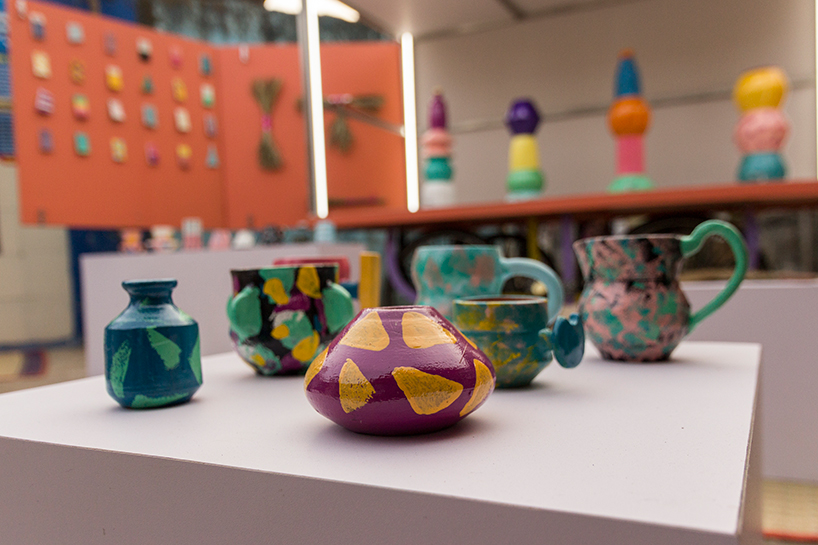 ‘this museum is keeping our skills alive,’ the chauhan family said. ‘it’s promoting them so that pottery can carry on for one or two generations more. there are so many rich people in bombay. they showcase skilled labor sometimes in big malls. but amanda and jorge came all the way from amsterdam to show our craft right here in dharavi…and so very nicely.’ 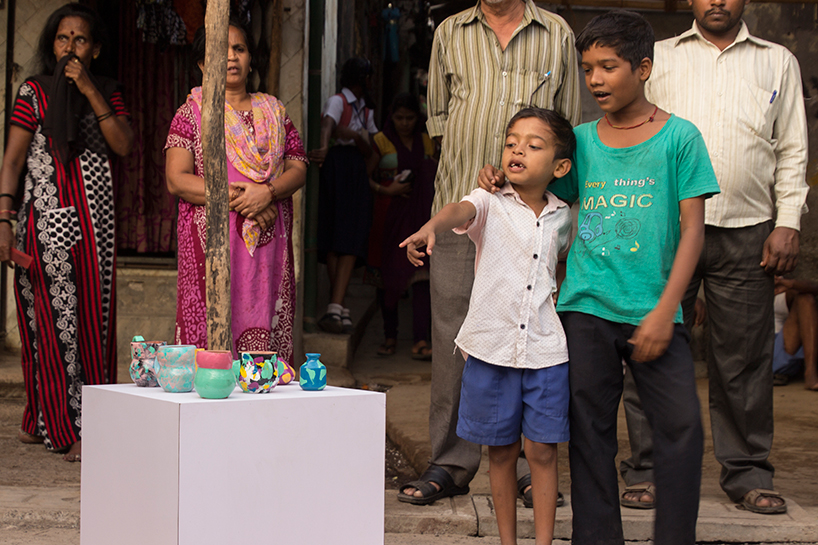 the theme of the second exhibition was street cricket — one of the most beloved and practiced sports in dharavi. ‘we were inspired by how this game is being modified and reshaped in the streets of dharavi,’ rubio and pinatih describe. ‘anything close to a wooden or plastic stick will do as the perfect bat, balls differ in size, stumps are painted on walls, and rules are bent again and again to adapt the game to the size of the chosen location. what in a professional game would be a great drive — batting the ball out of the field’s bounds — in dharavi it means quite the opposite. the batter is actually out because he lost the ball in between the rooftops, or even worse, endangered the neighbor’s life who was home cooking with a window open.’ 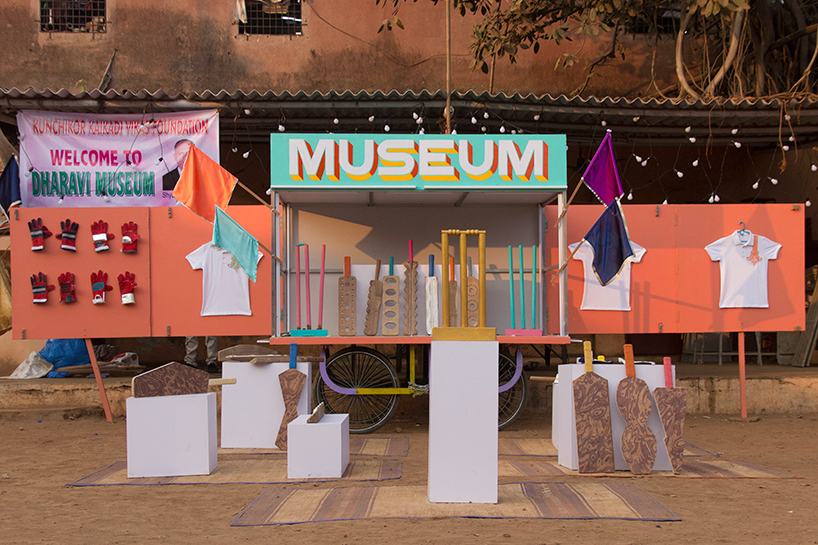 the theme of the second exhibition was street cricket, one of the most beloved sports in dharavi

displayed in the mobile museum was a selection of hand-carved cricket bats in different shapes and colors. each of the 27 tools had been masterfully transformed from old pieces of reclaimed wood into unique bats by a local carpenter named sandeep. in conjunction with the exhibition, a tournament made up of teams from four different communities kicked off in dharavi. locals used the newly-designed bats, sported cricket uniforms made by skilled embroiders in the area, and wore handcrafted gloves made by a local maker who adapted his safety gloves production to the game of cricket in a matter of days. ‘in dharavi, street cricket symbolizes the locals’ flexibility and ability to change and reinvent themselves on a daily basis.’ 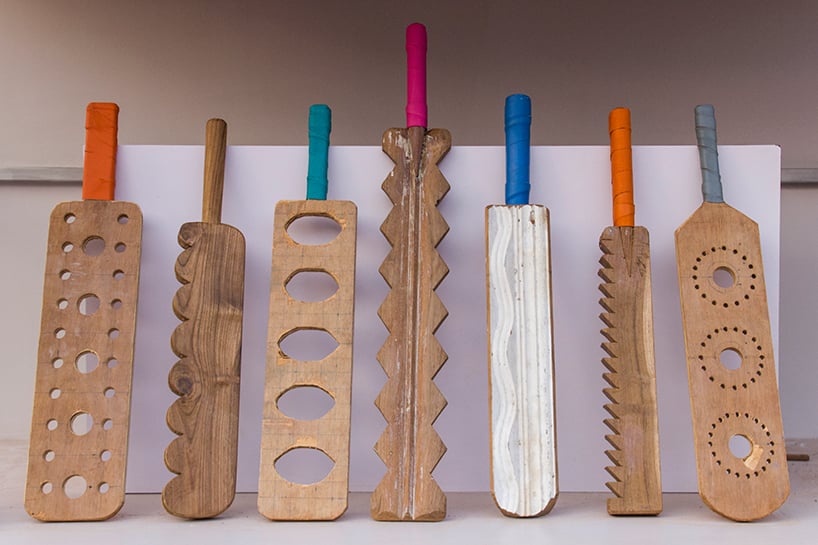 hand-carved cricket bats, made in different shapes and colors, were crafted especially for the exhibition

upcoming exhibitions and workshops at the design museum will be held over the following few months in dharavi. in summer 2016, the results of the initiative will be presented and discussed at a conference in amsterdam. experts from different disciplines will be invited to share their ideas on how design can help change the response to home-grown neighborhoods around the world, and how it can be used to encourage the forward development of these areas.

design museum dharavi has been made possible by two dutch cultural foundations — creative industries fund NL and the art of impact. 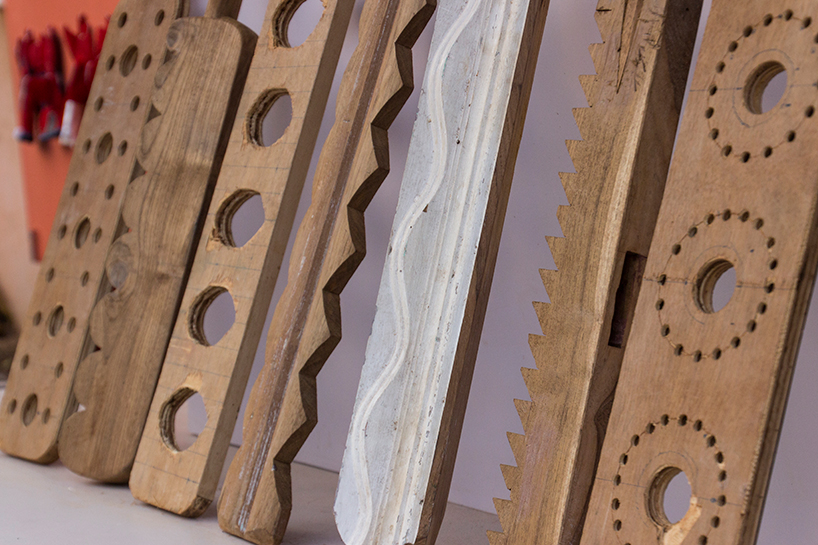 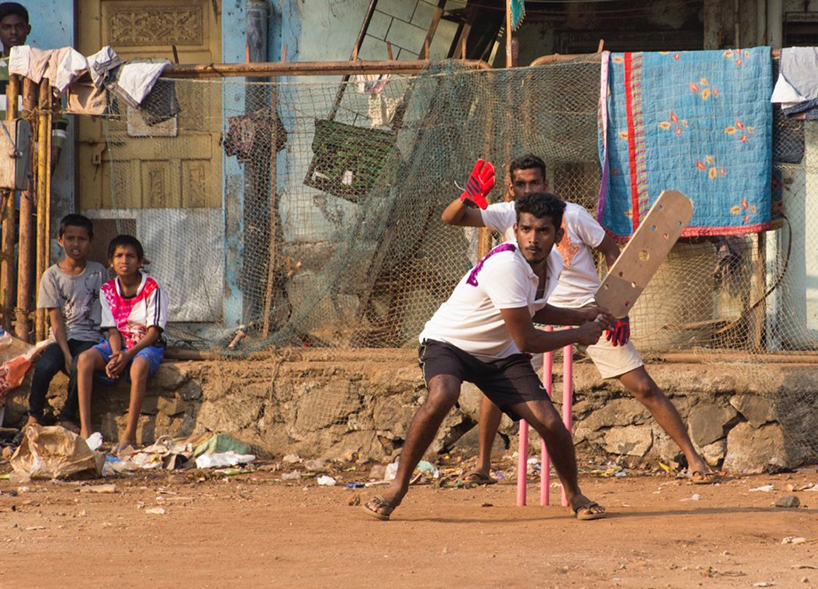 in conjunction with the exhibition, a cricket tournament kicked off in dharavi 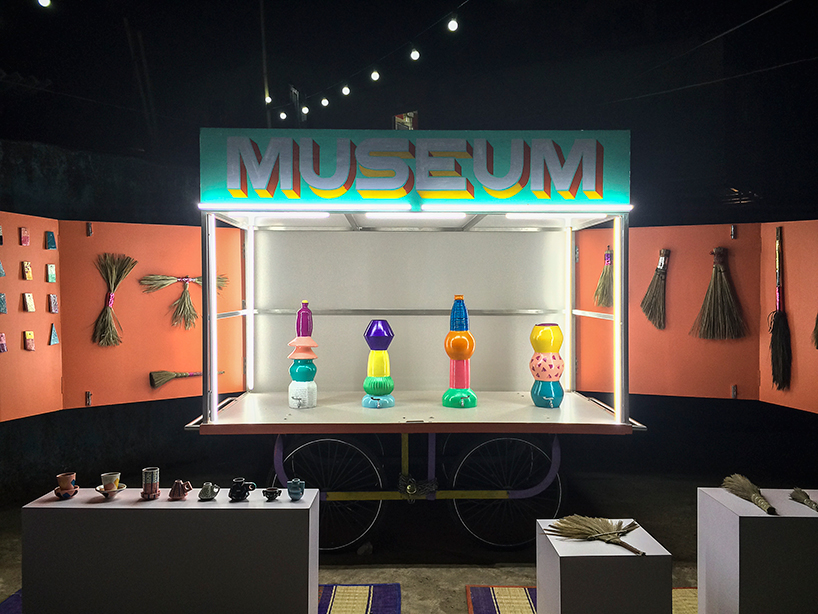 the venue portrays the makers’ identity, and that of their community, in surprising and original ways 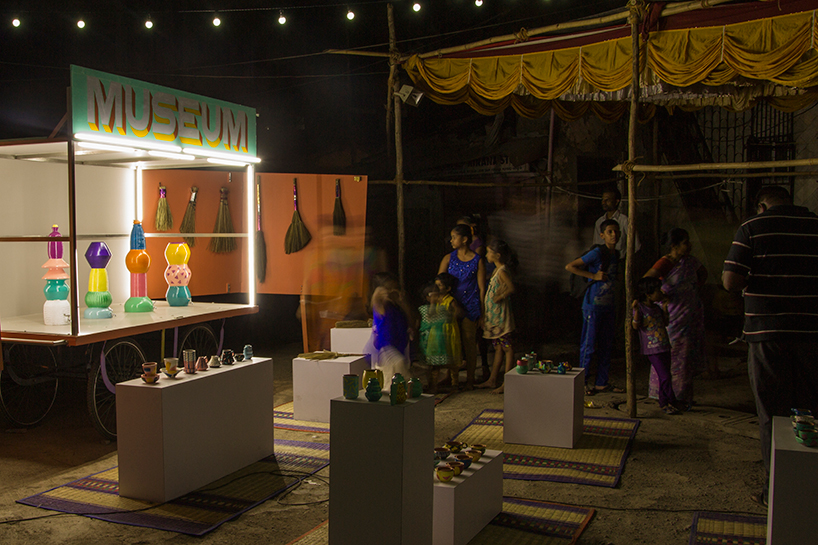 locals and visitors travel to dharavi to visit the design museum 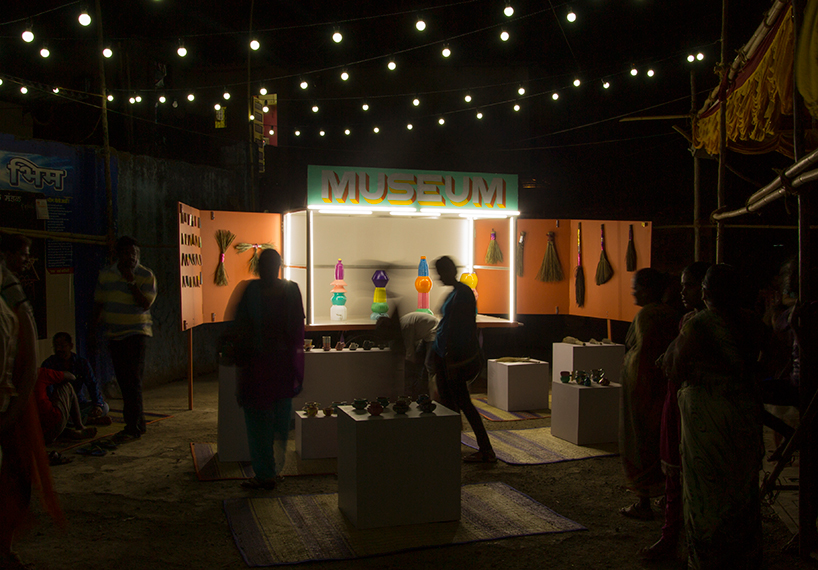 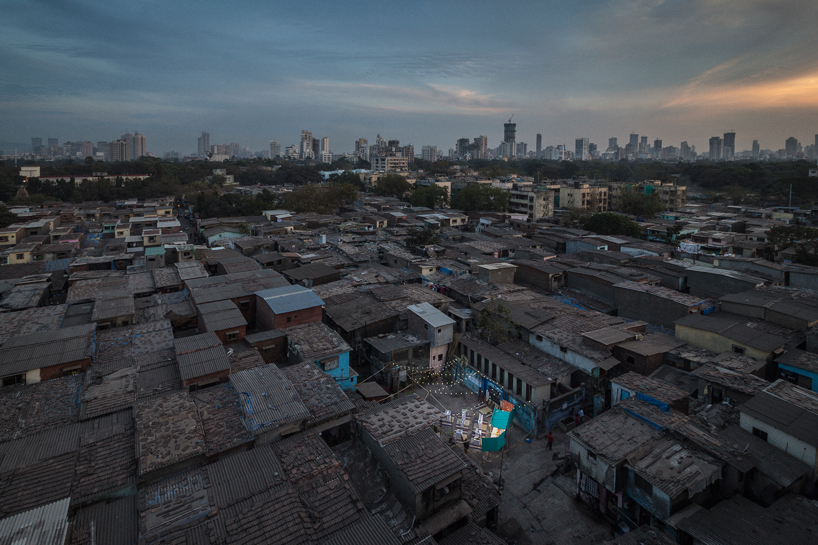 overall, the project seeks to challenge the negative perception of informal settlements around the world

inside the workshop of a pottery factory in dharavi

everyone has their own way to drink chai: from a small cup, a glass or even from a saucer

rubio and pinatih created new designs together with the potters

space is limited in the pottery workshop

for the street cricket exhibition, locals engaged in a game