the ‘doomsday clock,’ which indicates how close our planet is to complete annihilation, is now only 100 seconds away from midnight. it’s the closest to catastrophe that scientists have judged the world to be at any point since its creation in 1947, the start of the cold war.

scientists originally developed the ‘doomsday clock‘ as an effective way to communicate to the public the threat nuclear weapons posed to humanity. those same scientists worked on the atomic bomb-building manhattan project during world war II.

today, the university of chicago-based bulletin of the atomic scientists used the doomsday clock to register existential threat levels and raise awareness of them ever since. deciding the measure of threat is the BAS science and security board, which includes 13 nobel laureates. 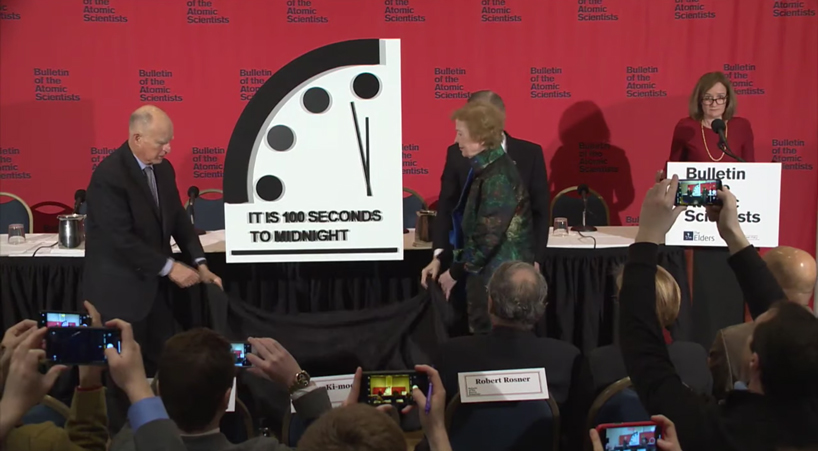 images courtesy of the bulletin of the atomic scientists

‘the doomsday clock is a globally recognized indicator of the vulnerability of our existence,’ said mary robinson, chair of an independent group of global leaders called the elders, and the former president of ireland and former un high commissioner of human rights. ‘it’s a striking metaphor for the precarious state of the world, but most frighteningly, it’s a metaphor backed by rigorous scientific scrutiny.’

in 2019, the clock was set at two minutes to midnight — the same place it was wound to in 2018. the clock’s minute hand was moved forward after the august 2019 collapse of the 1987 intermediate-range nuclear forces treaty between the us and russia.

the demise of the pact frees both nations to deploy land-based missiles over ranges that leave little time for a response. there were also growing signs in 2019 that the trump administration was aiming to withdraw from the open skies treaty, which allows the us and russia to observe one another’s military installations through closely monitored overflights.

video by bulletin of the atomic scientists

‘I have to admit [that] we set the clock in november,’ said george washington university research professor sharon squassoni. ‘this was before recent military actions by the US and iran, iran’s statement or threat that it might leave the nuclear non-proliferation treaty, and north korea’s abandonment of talks with the united states.’

a growing number of disasters linked to global climate change resulting from the continued consumption of fossil fuels was another factor cited for moving the clock even closer to midnight. last year was the second hottest on record for the earth’s surface with average temperatures 1.1c warmer than the average between 1850 and 1900. meanwhile, greenhouse gas emissions from human activities are on track to push that warming to 3 or 4C.