drawing upon man’s fascination with skulls, product designer dov ganchrow has created a series of works that combine real and 3D-printed cow skulls, altered in various ways with a playful design attitude. in a seamless progression from earlier projects, ‘the beast of the anthropocene’ seeks to highlight man’s ever-evolving need to reshape the natural to better suit our needs. 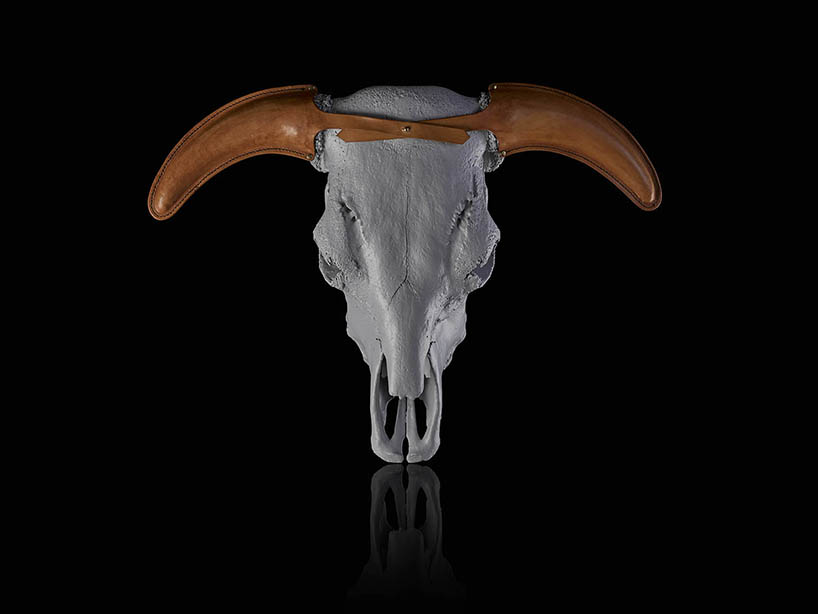 dov ganchrow collected the cow skulls over several years of off-trail hill hiking and, in collaboration with stratasys, prof. leore grosman, and the institute of archaeologys digital lab at the hebrew university in jerusalem, 3D-scanned one of the most complete specimens to record its exterior topography. ganchrow then sectioned it with dove tail geometry into three portions: the front, central, and horn area. a modular mechanical system has been imposed on the skull, not only allowing for fixed linear motion between the parts, but also creating a means by which parts are interchangeable. in addition, the object can afford many additions and alterations, either virtually with digital design or manually, with a drill and saw. 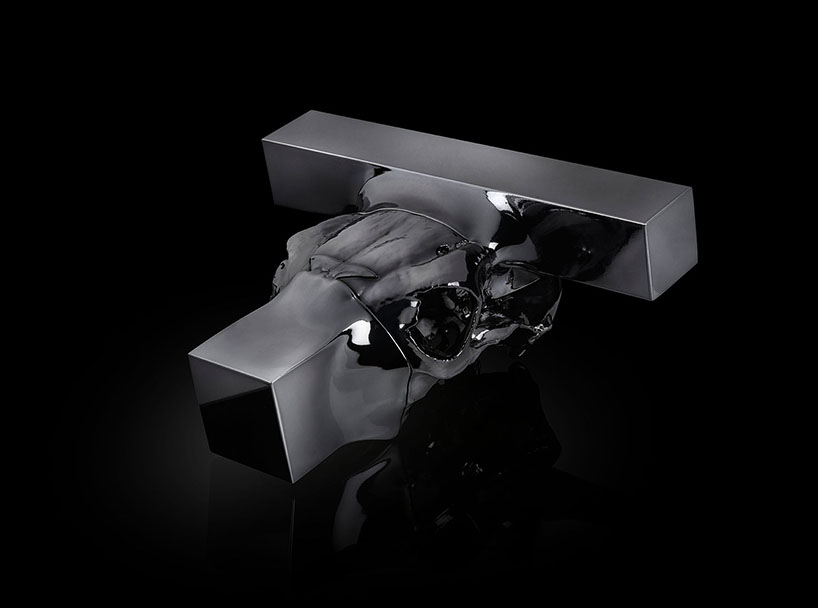 the collection focuses on revisiting the heritage of design history, antique eras and timeless design concepts from different cultures, exploring the way in which these are interpreted with our contemporary social philosophy, modern design tools, technologies and post-industrial visions. ‘at some point we shifted from being man as nature to man in nature. this laid the groundwork for what we have been doing for a long time and at an accelerated rate–reshaping the natural to better suit our needs,’ explains dov ganchrow, who is also a senior lecturer in the industrial design department at the bezalel academy of arts and design, jerusalem. ‘a cow is a perfect example of an ‘object from the anthropocene’, having been transformed by humans over centuries, from wild beasts to managed resources, such as meat, milk-making mechanisms and leather suppliers.’ 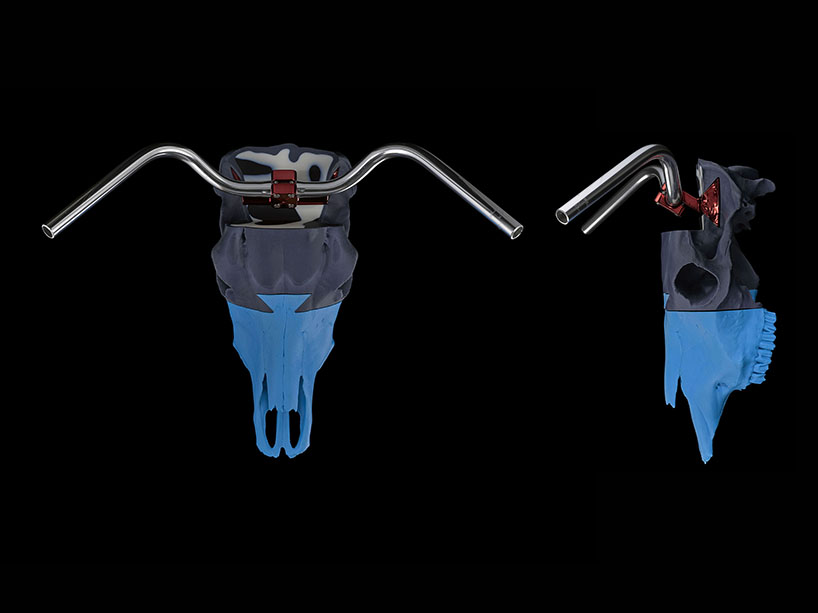 as both the 3D-printed and original skull works have a plastic color finish to them, it is not immediately evident to viewers which objects are bone and which are polymer, raising questions about how our knowledge that an object is real might affect our relationship to it. ‘having 3D-printed interchangeable cubical parts for the cow skull horns and snout seems almost irrational, when considering what the technology allows,’ adds the tel aviv-based designer, ‘but these reductive forms are here as both an expression of human thought and dominance, morphological contrast, as well as a critique of the current dominant 3D-printing form trend.’ 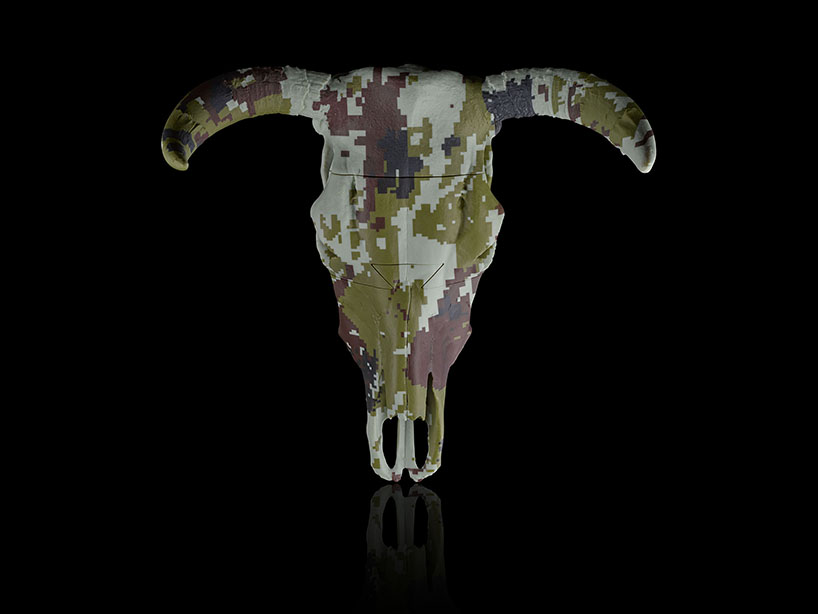 the first works from ‘the beast of the anthropocene’ collection are currently on view at the exhibition, ‘uncanny’ curated by noga shimshon, part of the design lab at the holon design museum in israel. the exhibition is a manifestation of the freudian term ‘uncanny’, which describes the sense that is provoked when we come upon phenomena that blur the line between the real and the imagined, the human and the non-human, giving rise to a paradoxical combination of strange and familiar elements. the exhibited works provoke a sense of discomfort, while raising questions concerning the possibility of creating something new out of familiar things. 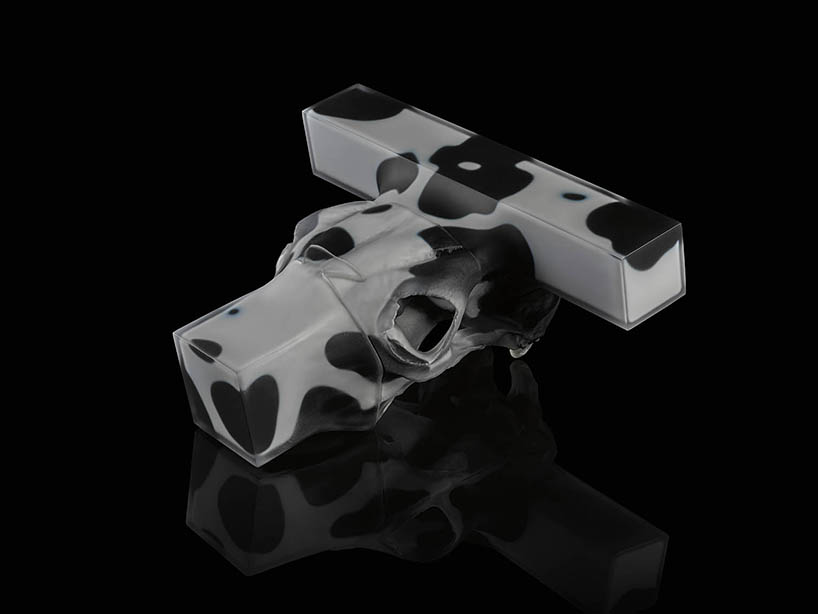 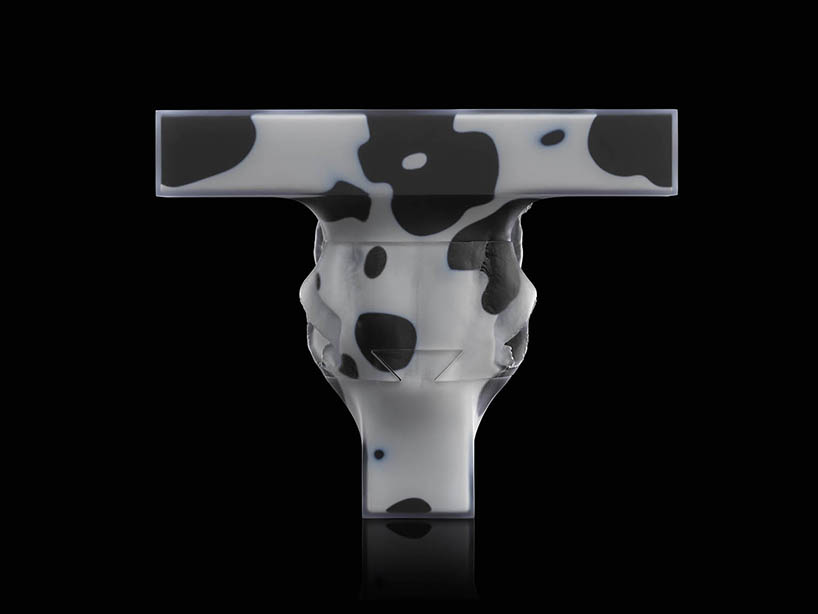 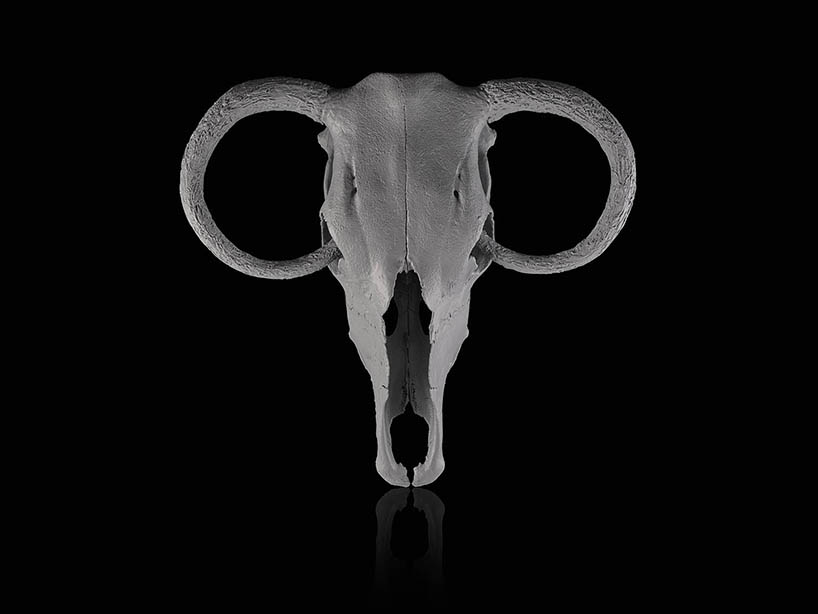 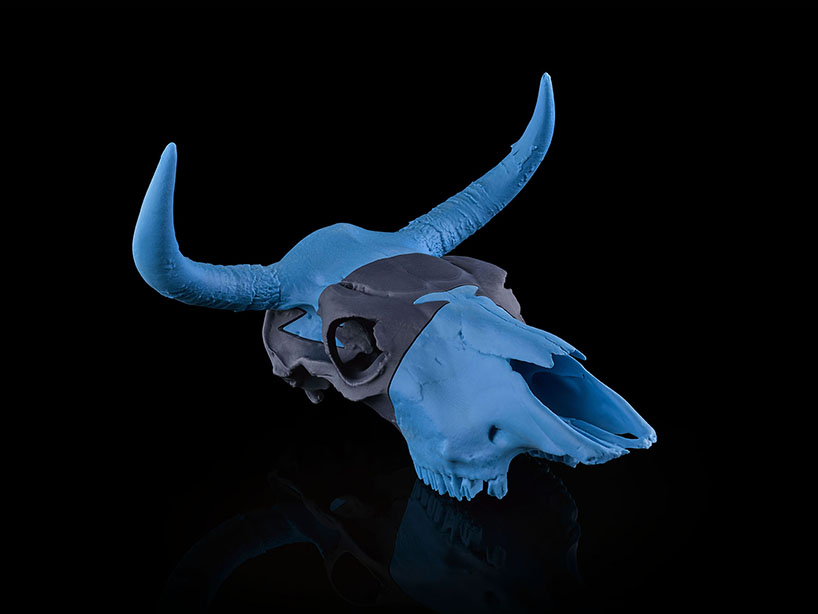 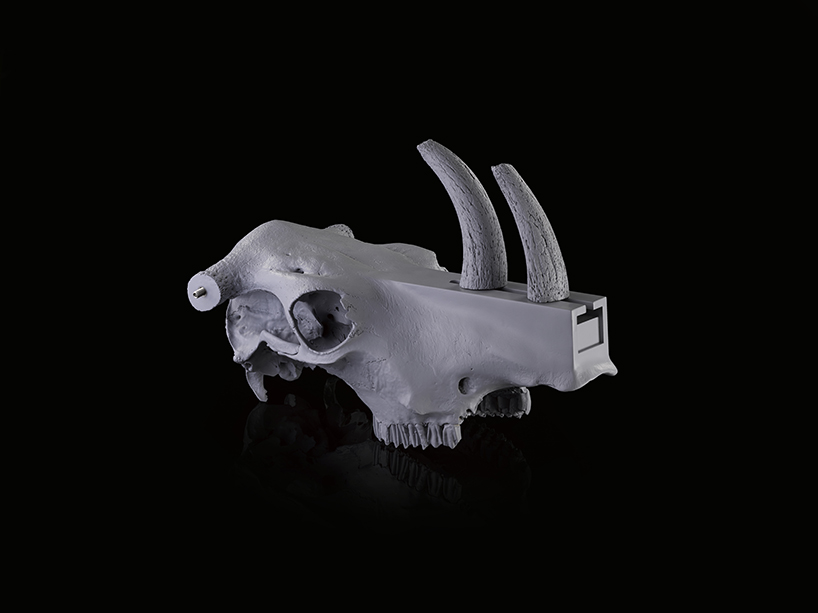 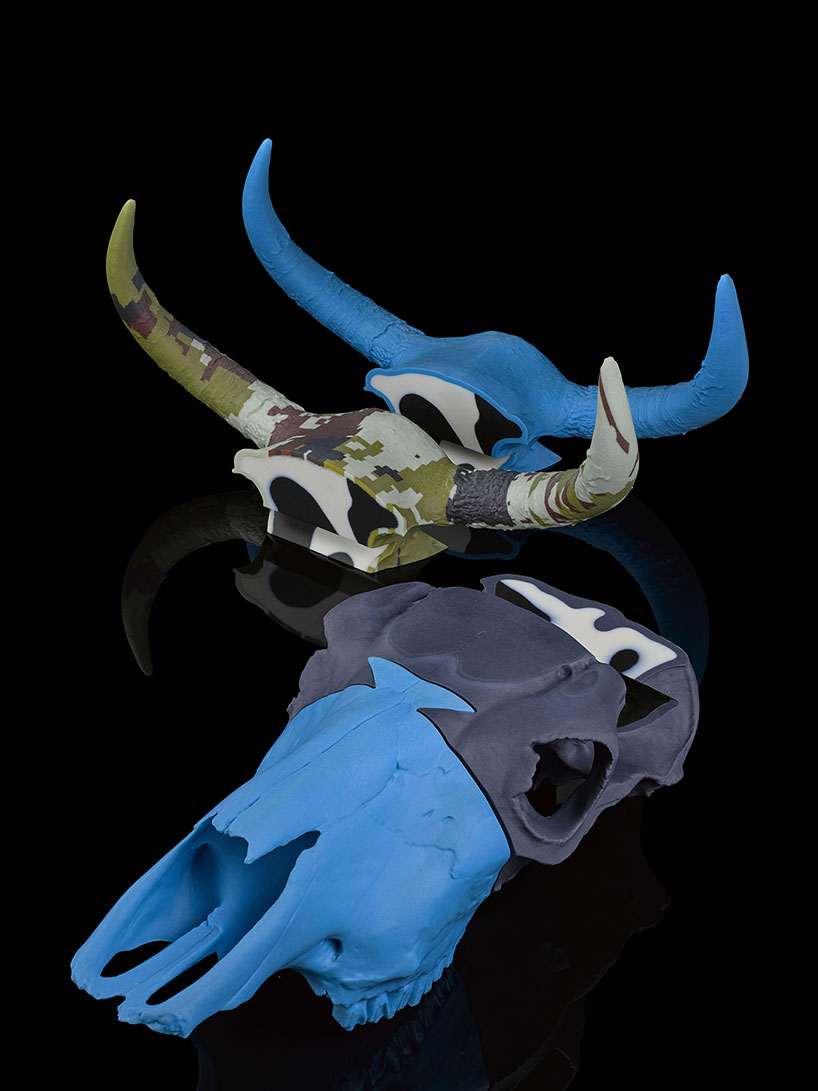 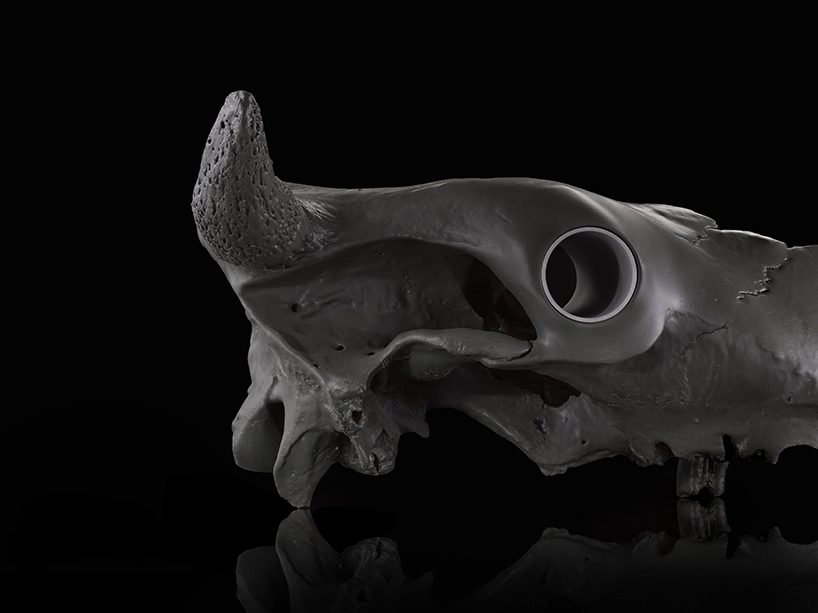 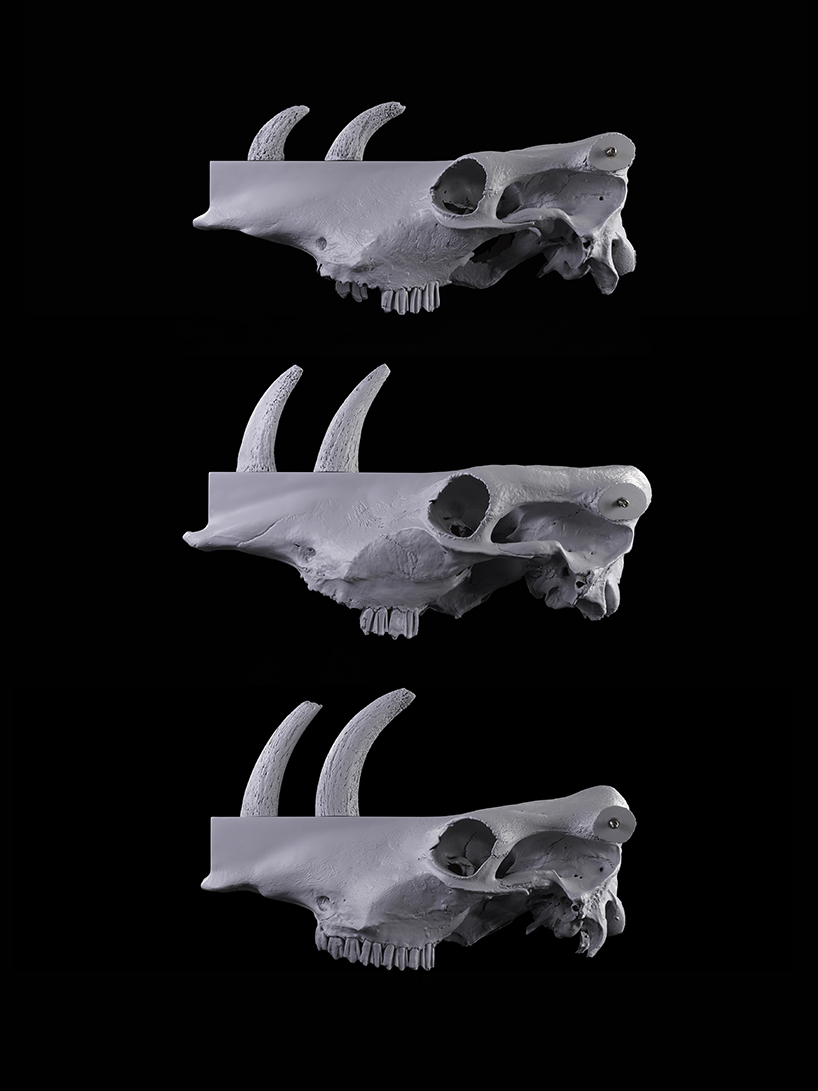