a project of the new york city department of parks and recreation, the former site of yankee stadium has been converted into a community park designed by stantec and thomas balsley associates, and in early 2010 doyle partners were set the task of filling the park with the memories of what took place there. programming needed to take into consideration three ball fields; a championship field, a little league field and a softball field on the site of the stadium.

their solution was  to ‘draw’ on the field itself with blue synthetic grass, which allowed them to map the outline of the original yankee stadium field without intruding on the three new fields.

additionally several typographic installations cover walls, benches and pavements with facts and phrases attributed to the history of the park. visitors can also look at photodisks of yankee stadium’s historical moments in via several viewfinders designed by steve cozzolino, located around the park.

— designboom spoke to stephen doyle to learn more about the project

DB: what was your central objective at the start of the project  and how did you achieve it? SD: our objective was to infiltrate a new community park with a narrative of what happened in this place before… it is the site of the original yankee stadium, and the site of many historical events, obviously baseball history was made on this spot, but also boxing, football, soccer history, as well as political, musical and community history.

invoking the heritage of the site, especially the hallowed ground of baseball fans everywhere, was the mission laid out by stantec and the city, and the strategy was to do it with as light a footprint as possible, so that the history is there for those who want it, but yet it doesn’t interfere with the neighborhood kids who come there to play in their little league games. we used a macro and micro approach to tell our story, the macro event is the ‘drawing’ of the original yankee field, showing in a five-foot wide swath of synthetic fibers, the exact position of the field, woven into the new three ball fields that occupy the site.

the micro infiltration tells the story underfoot, with 49 pavers, three benches and one wall – all static surfaces inscribed with facts, date, quotes and memories. we bring the history of the site alive with the installation of seven ‘viewfinders’ which are geographically accurate windows into the past. peering into the eyeholes, one sees in turn, seven historical photos, rendered in 3D, each clearly marked with captions identifying the event. 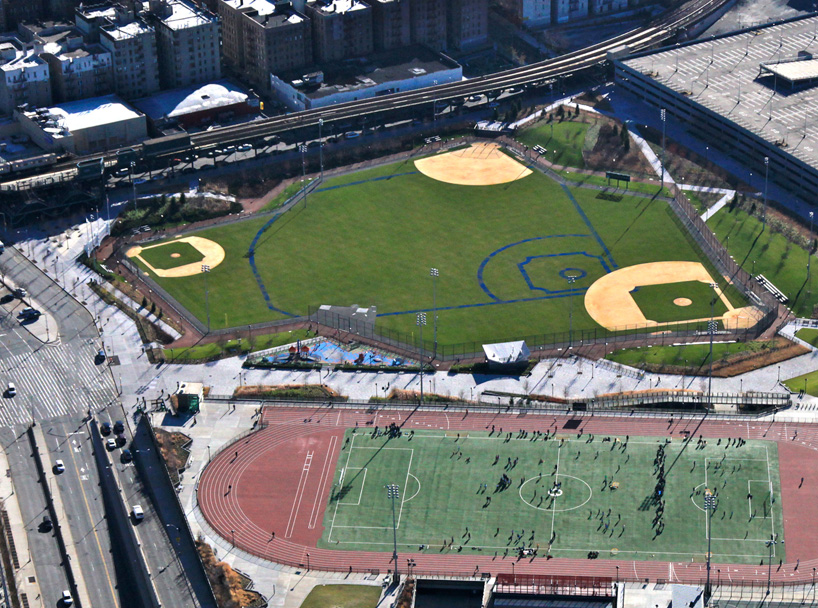 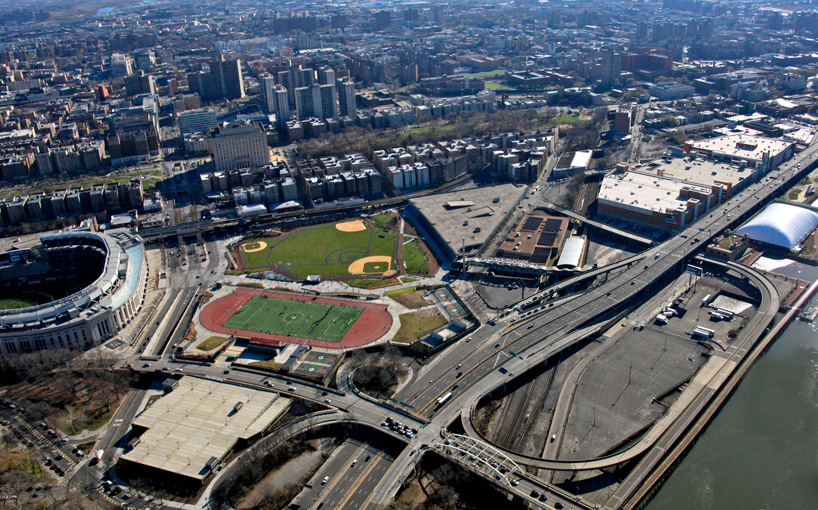 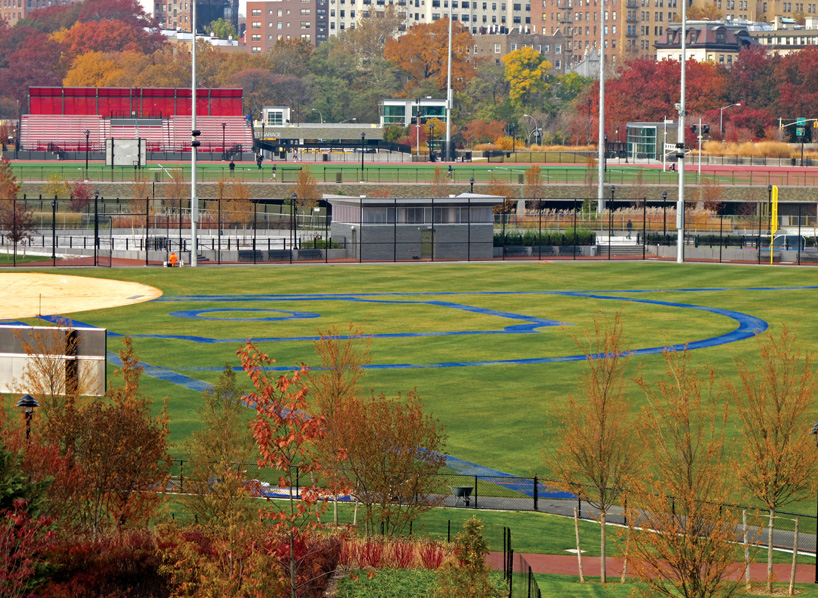 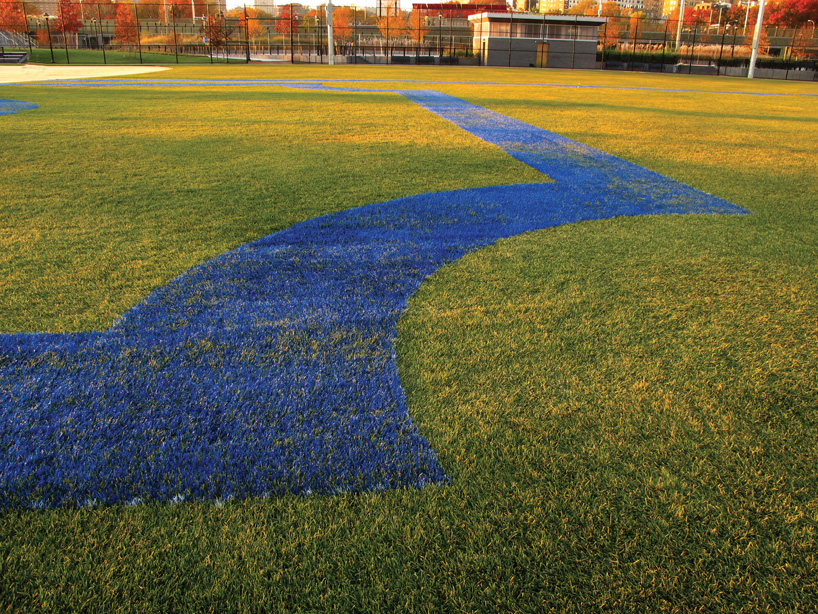 detail of the blue synthetic grass knitted into the regular turf

how did you decide which facts and phrases you would use for the benches and pavers? a baseball historian, dr. harvey frommer was hired to draft the most salient historical events to be inscribed into the pavers, and stantec led sessions to vet the events with community groups, commissioners from the parks department, the public design commission, the mayor’s office, new york city economic development and other interested parties. needless to say, after substantial and diverse input, the 49 events were then edited down to a maximum of 200 characters, engraved in granite and filled with epoxy and set in place in our ‘constellation of events’, the pathway that traverses the park.

the inscriptions on the benches and the wall behind the softball field home plate were an attempt to harness the diversity of events that happened at yankee stadium, from lou gehrig’s parting quote about being ‘the luckiest man alive,’ and a quote from nelson mandela, ‘…I am a yankee!’ from his visit just 33 days after his release from prison. billy joel croons that his is ‘in a new york state of mind’ in the first rock concert ever at the site (the day after mandela’s visit) and the ‘greatest game ever played’ commemorate the colts defeating the giants in december of 1958.

including the sign on the fence, ‘sometime’s you win, sometimes you lose, sometimes it rains’ was the brainstorm of emil martone, our client from EDC. it’s a quote from the movie bull durham, and yes, we did obtain permission, but it offers just the right right note of encouragement, wisdom and whimsey for the park. 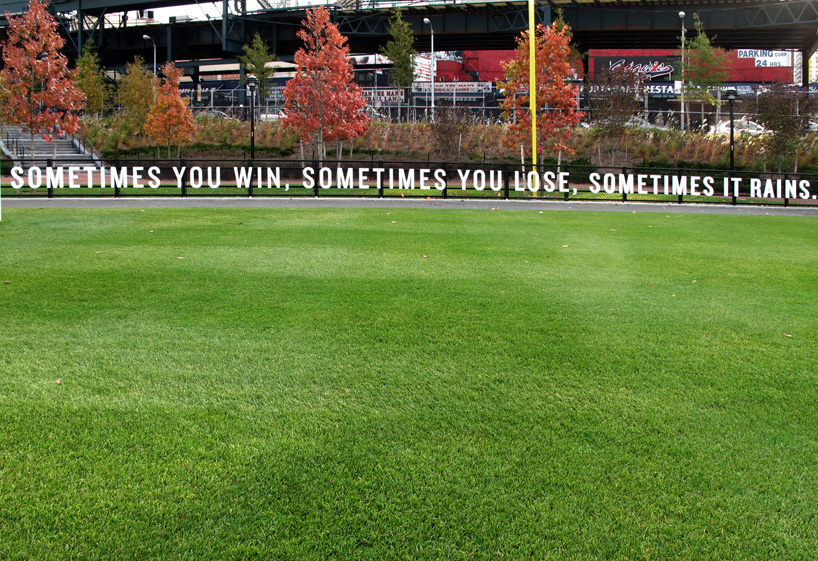 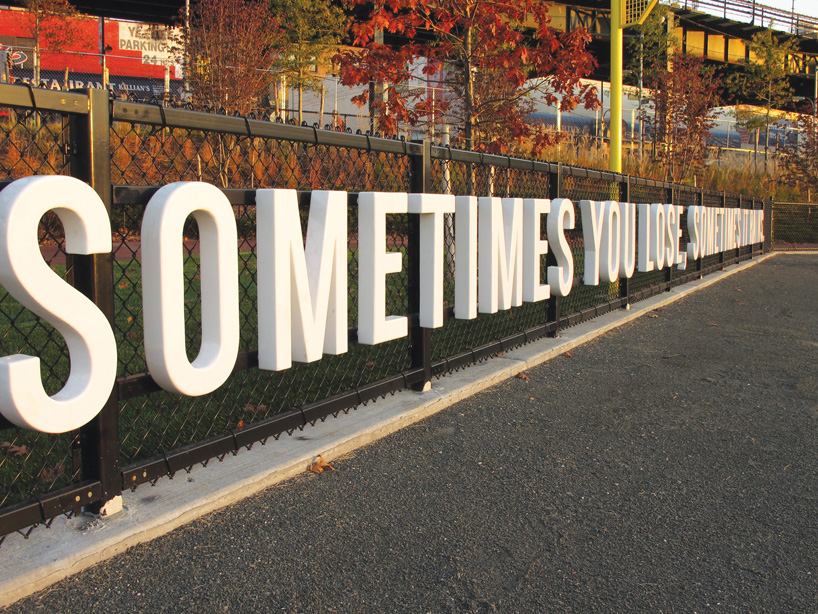 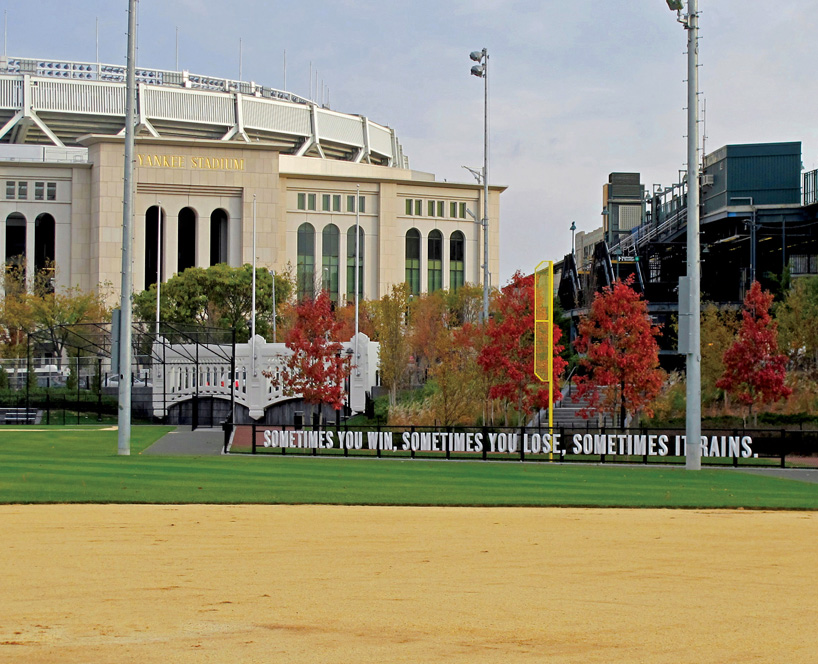 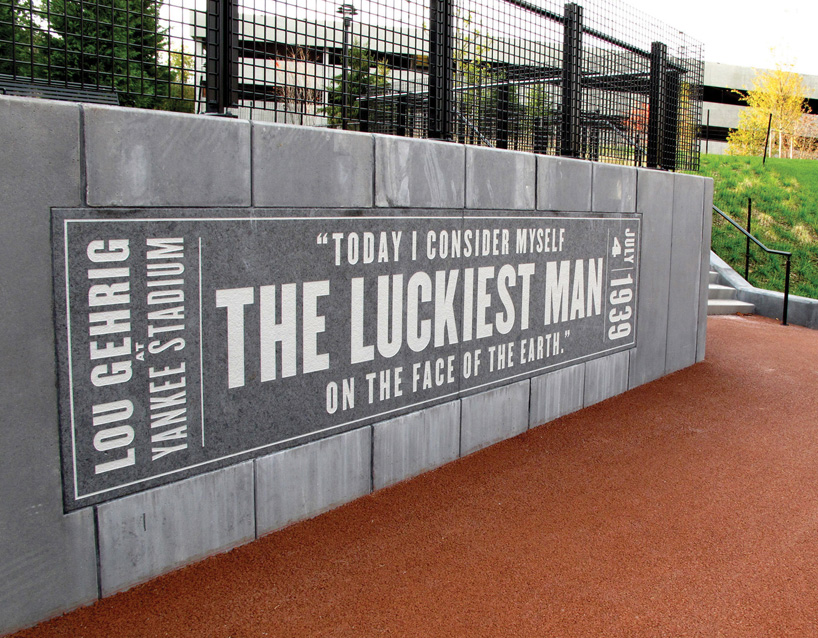 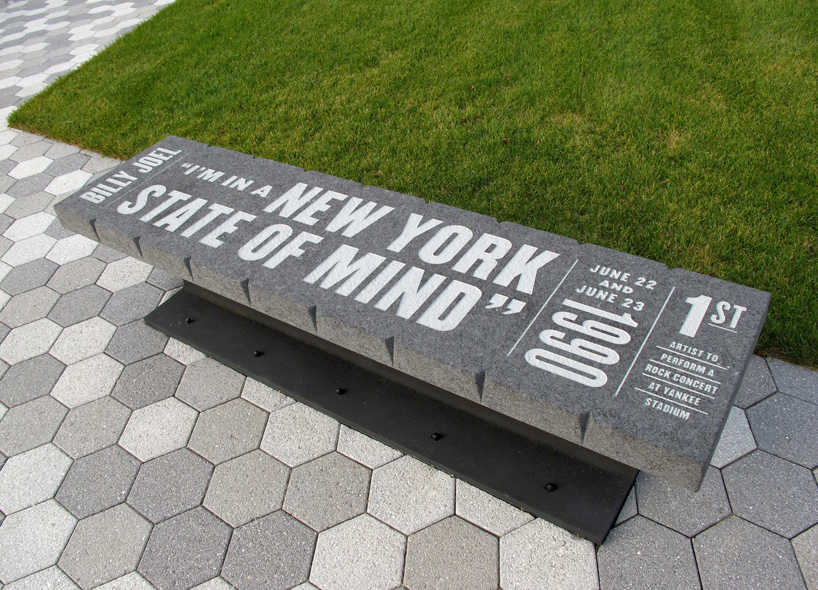 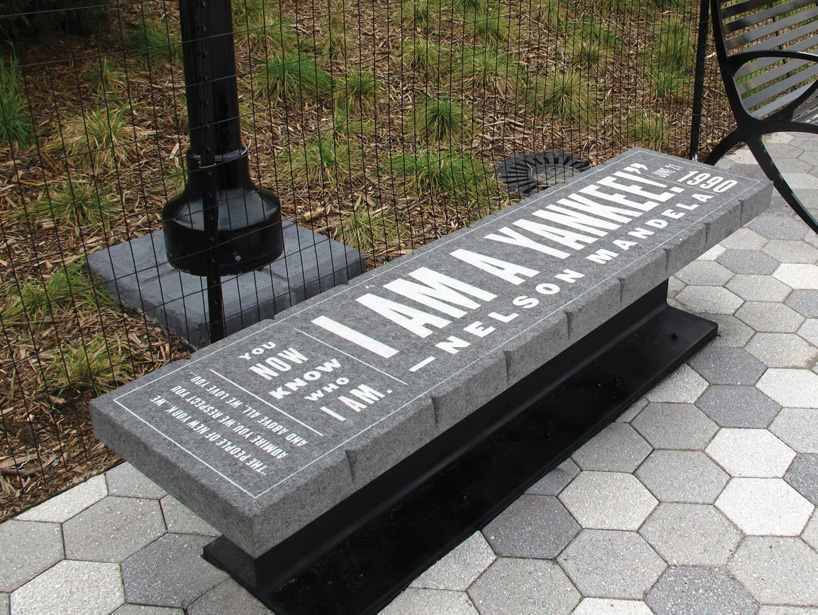 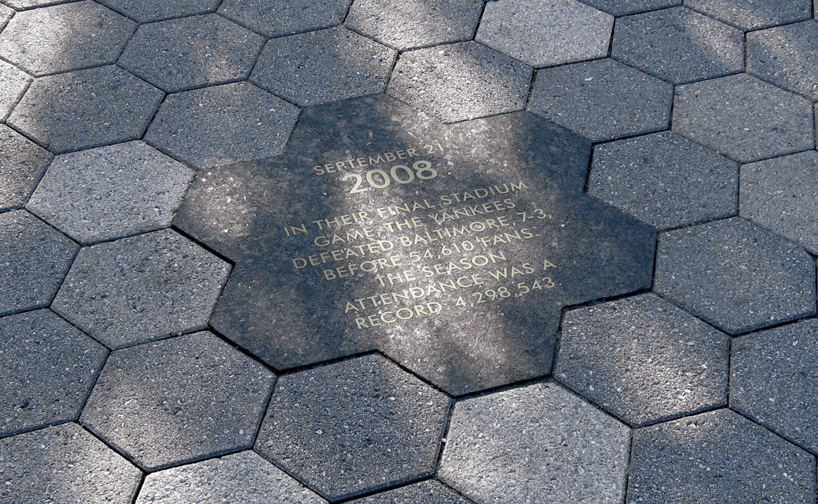 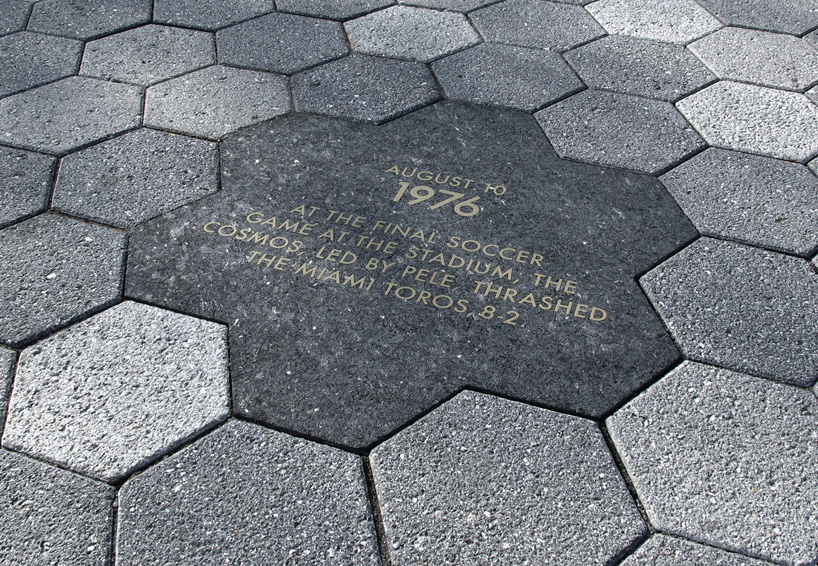 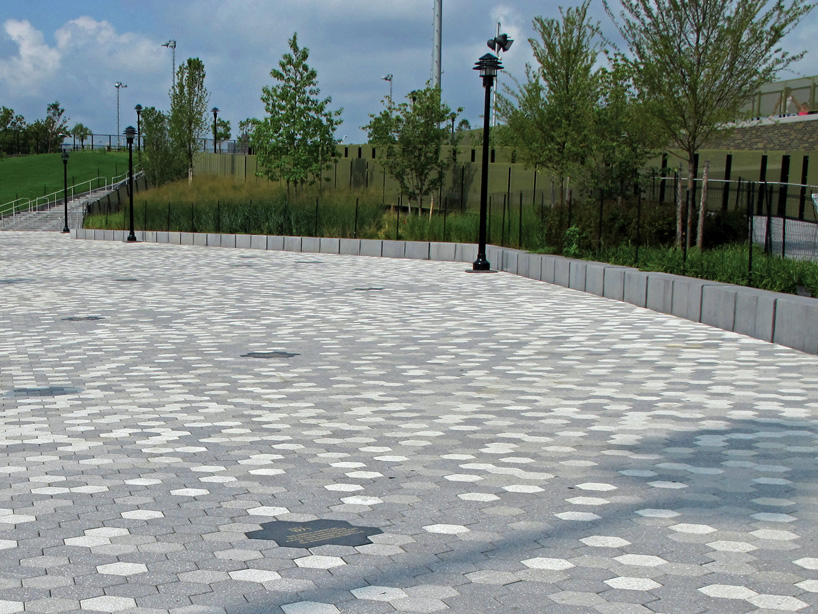 what was the most demanding aspect of the project? striking a balance between the numerous vested city agencies and community stakeholders, which were large, vocal  and diverse groups to please. additional balance was needed in the design, so that there are frequent but completely unobtrusive reminders about the story of this site. while paying homage to the history of the site, we couldn’t lose sight of the current use of the site, which is to be community-friendly collection of ball parks, and not a maudlin memorial to the past.

what has been the response from visitors so far? the park had a ‘soft opening’ in november 2011, but will be officially open and finished in the spring of 2012, so we anxiously await the next baseball season when local families will flood into the park, and baseball fans will trek through on their way to the new yankee stadium. we keenly await their reactions. 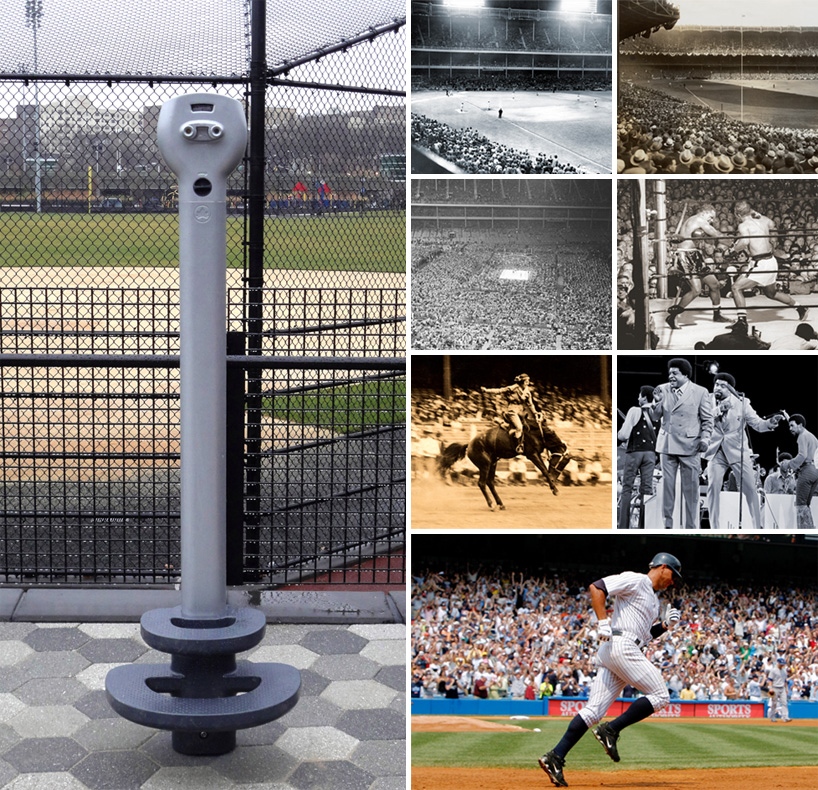 — all images provided by doyle partners