KLM royal dutch airlines will introduce a new ladies’ uniform for its 11,000-plus cabin and ground personnel, as well as for female pilots serving KLM and KLM cityhopper.

mart visser has designed a capsule wardrobe of 11 items, including jacket, trousers, two styles of skirt and a scarf. the new uniform uses his fondness for accentuating the body and has ‘a bit of sexiness thrown in’, he says.

the finished products are nothing to do with fashion – they are corporate attire. ‘I see corporate uniforms as a company’s statement to the outside world. the wearer should feel comfortable in my creation, further strengthening the KLM image.’ visser says. ‘it is much harder to design corporate clothes than couture.’ the uniforms have to be comfortable and fit sizes 32 to 52 as well as being suitable for all seasons. although he was largely given a free reign, there were some stipulations. and one of these was that visser used the sam KLM trademark blue material. 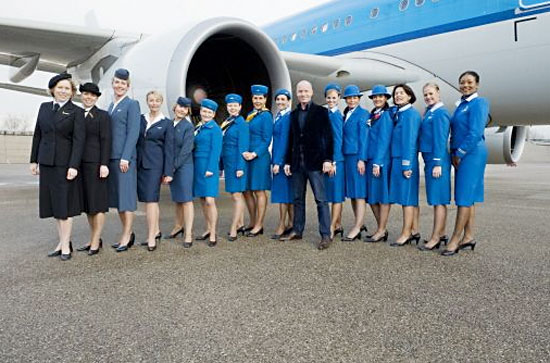 mart visser among KLM team. the current uniforms come from the nina ricci stable and are almost 20 years old.

the current planning is to present the entire collection in october 2009. the new uniform will become visible on the ground and on board in april 2010.