in the middle ages, looking at a mirror too often was considered a sin. with the technologies of today’s society, the act of capturing one’s appearance has been expanded towards the digital world and its media. taking cues from these concepts, industrial designer eglė stonkutė has developed ‘reflections: narcissuses and other flowers,’ a series of constructions that deform the way people perceive themselves in mirrors and transparent materials. these manipulations make allusions to a moving surface such as water, which is effected by exterior elements such as sound and wind. the intent of the work is to attract attention to inner beauty by listening to oneself.

the first installation is an interpretation of circular tides of motion within a liquid body. consisting of a single plastic sheet, ripples expand radially away from a center point as if the plane’s calm state has been disrupted by the touch of a finger. the result is a continuously changing series of rings recreating the environment. 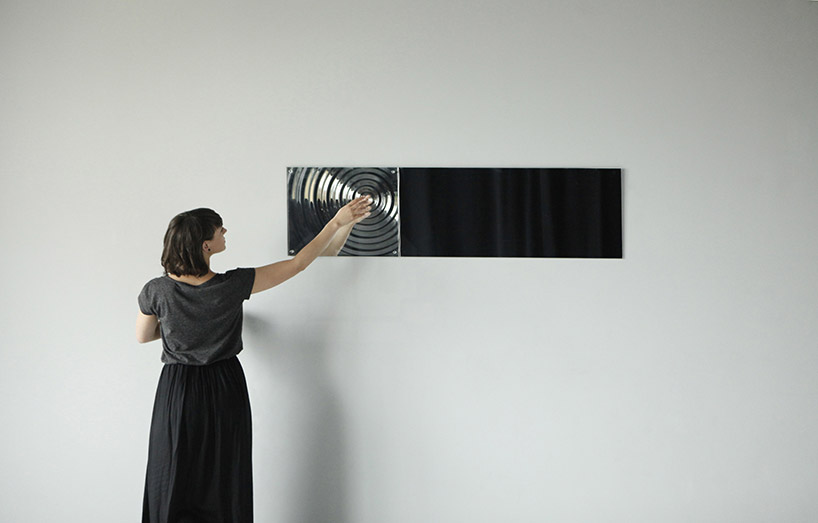 view of the first mirror 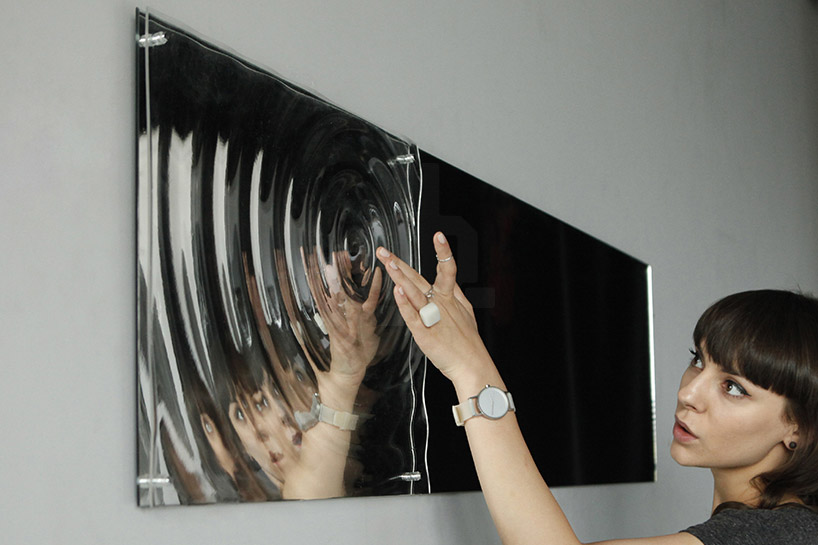 circular waves of water in plastic

for the next iteration, an excerpt from the legend of narcissus serves as its basis: ‘…how many times he put his hands into the water trying to take his sister out of the river that many times he failed…’ hence, the form appears as a curved surface that creates elongated representations of the viewer. in addition, a small, concave, moving mirror turns the view upside-down to reference the distortion that can be seen through a drop of water. 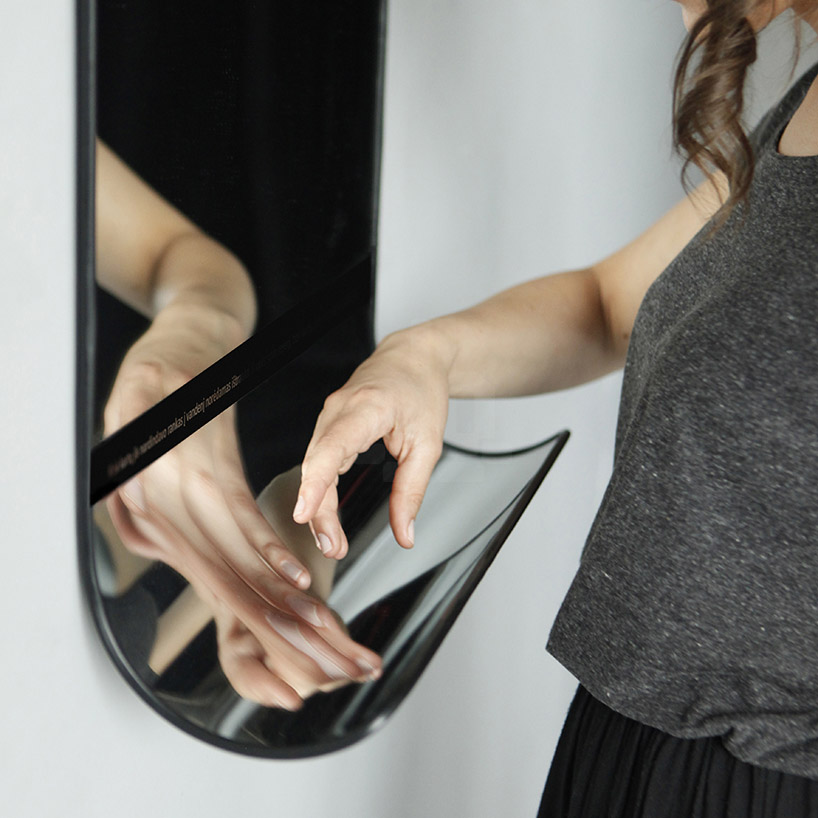 the curved surface elongates the form 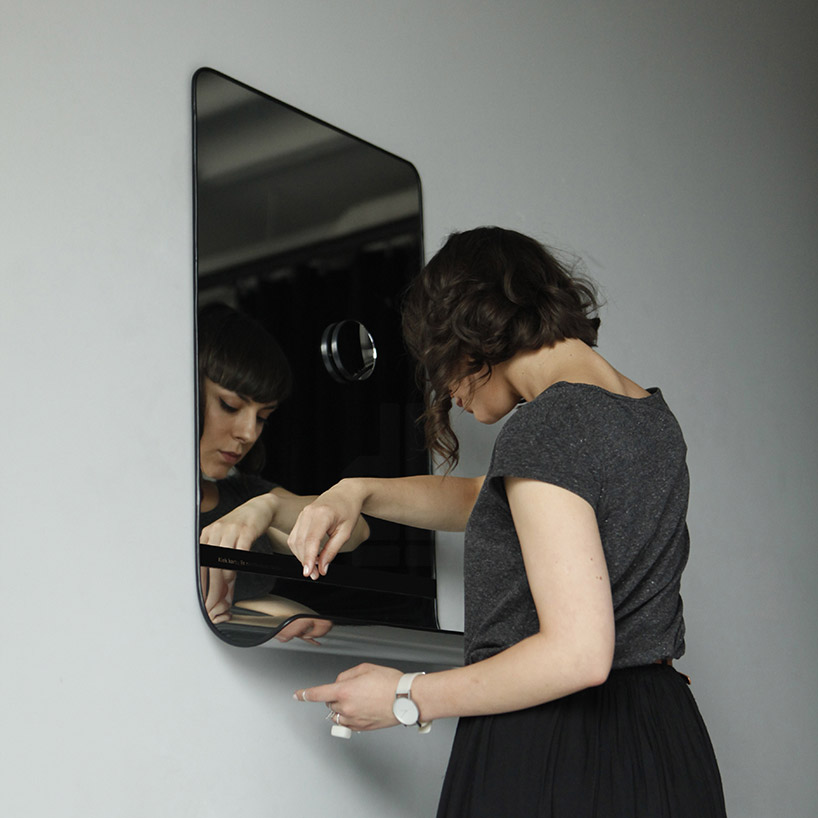 the mirror is an interpretation of the myth of narcissus 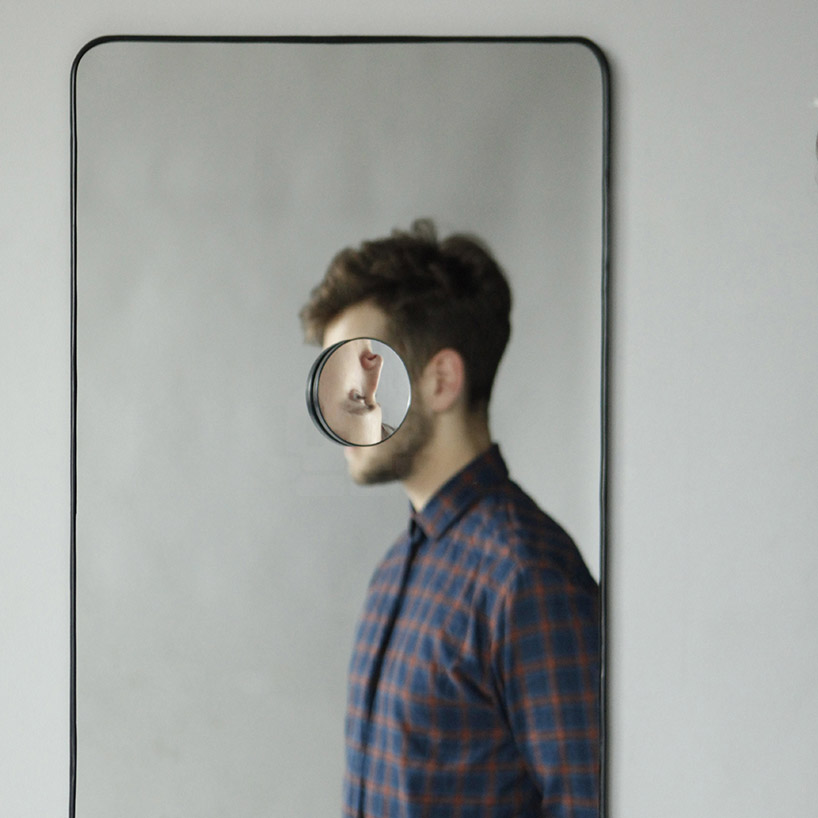 closeup of the small mirror that replicates a drop of water 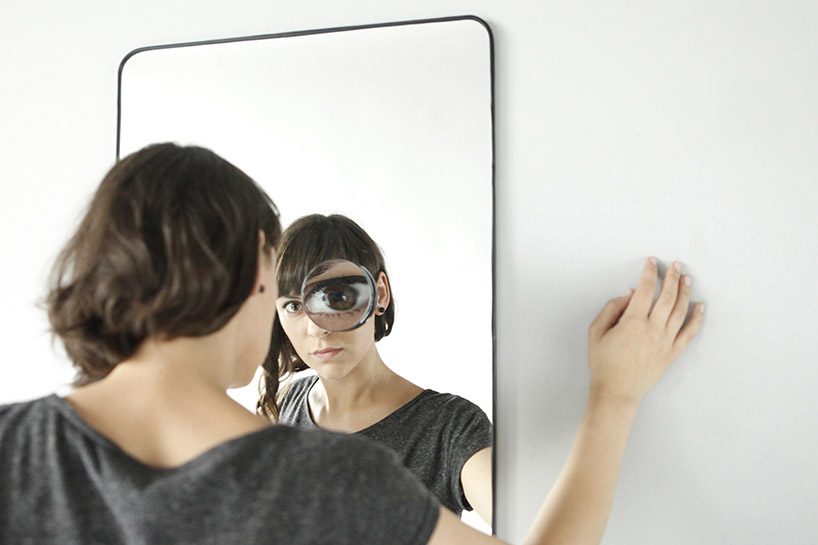 the reflection of the mirror gets bigger at a certain distance 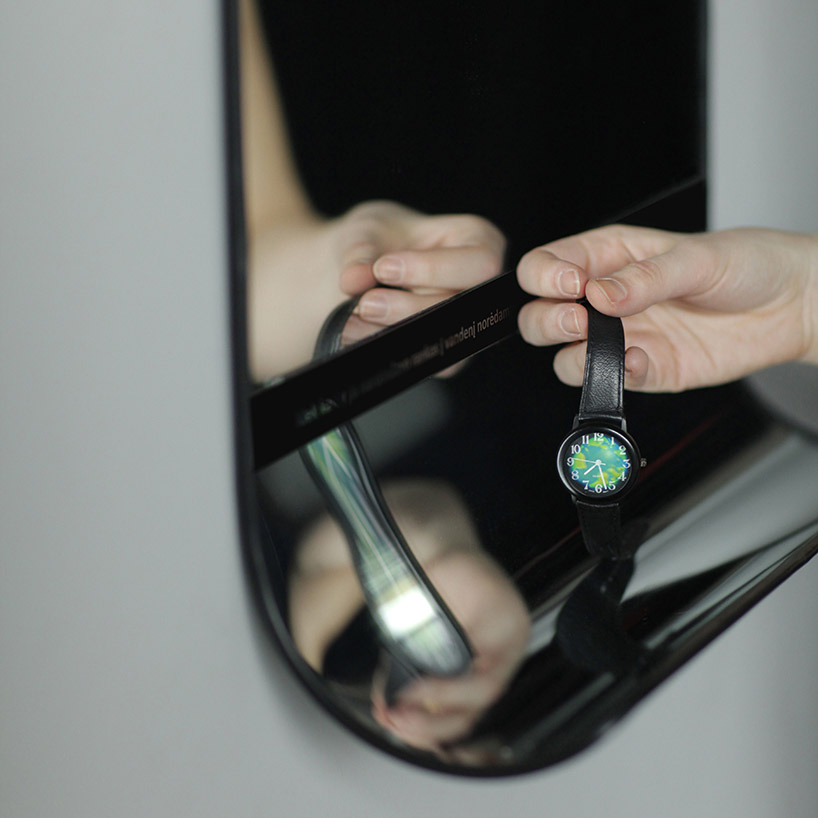 the installation in use 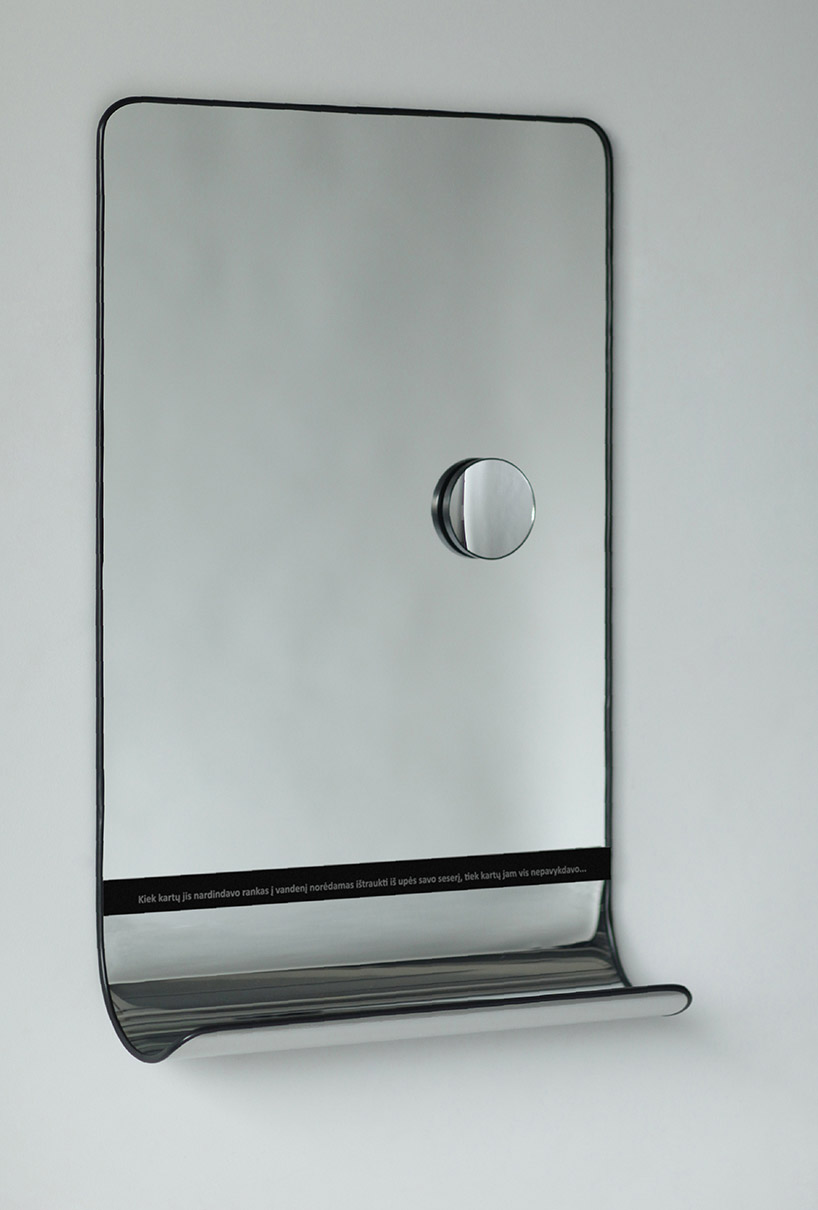 detail of a narcissus excerpt running across the mirror

the third structure is composed of crooked mirror strips that vertically skew the physical characteristics of anyone standing in front of it. every other layer undulates with the same curvature, suggesting that two surfaces have been proportionally sliced and placed in relation to one another. the produced effect develops an emphasized distance between inhabitants and their true appearance. stonkute explains her philosophy behind the work, ‘pleasant emotions and unexpected perspectives of a reflection in all the mirrors move people away to a world outside of reflections and let them dive into things that matter most – feelings and self-analysis.’ 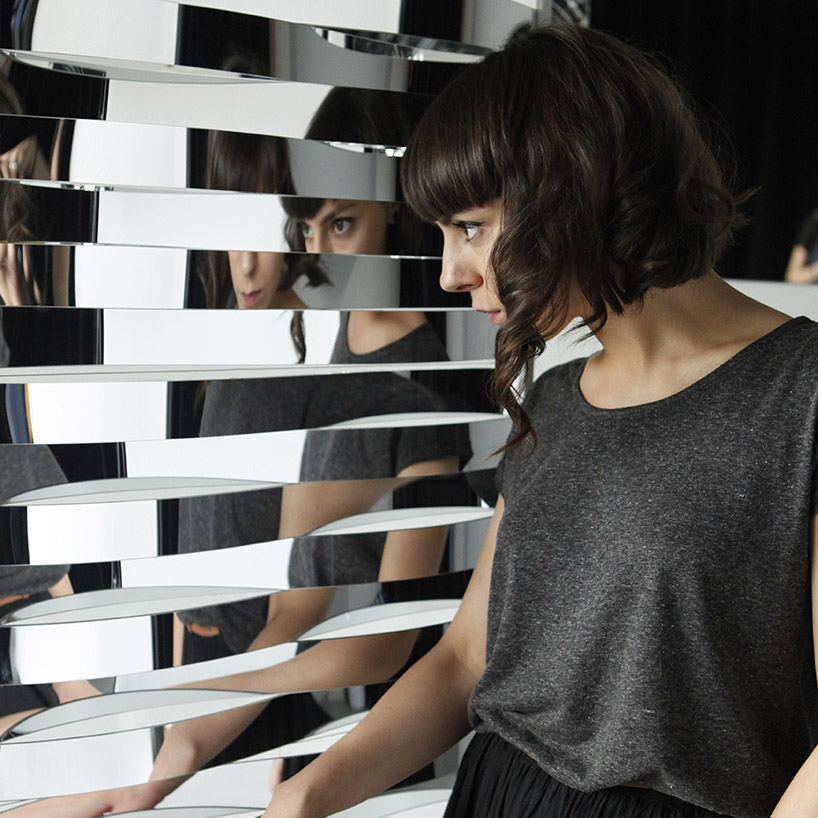 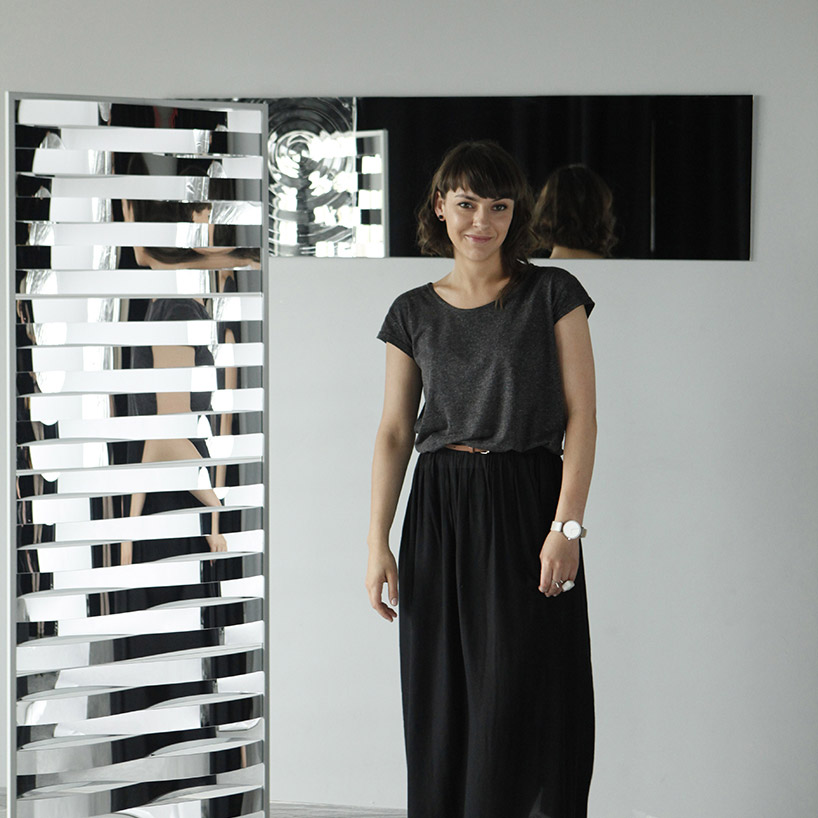 stonkute standing with her creations