as part of the fig-2 program, el ultimo grito (rosario hurtado and roberto feo) undertook a one week residency at the ICA studio in london at the end of last month.

the spanish-duo transformed the space into a testing ground for ideas and postulates, combining their on going investigation into the intersection of progressive outlines of future cities speculated by italian radical architecture group superstudio with the inner logic of the digital interfaces-specifically of map applications.

the residency expanded on the prospections of democratic use of built-in environment from physical to its symbolic and metaphorical dimensions. extracts from their daily diary below offer an insight into the various explorations they undertook while at the ICA. 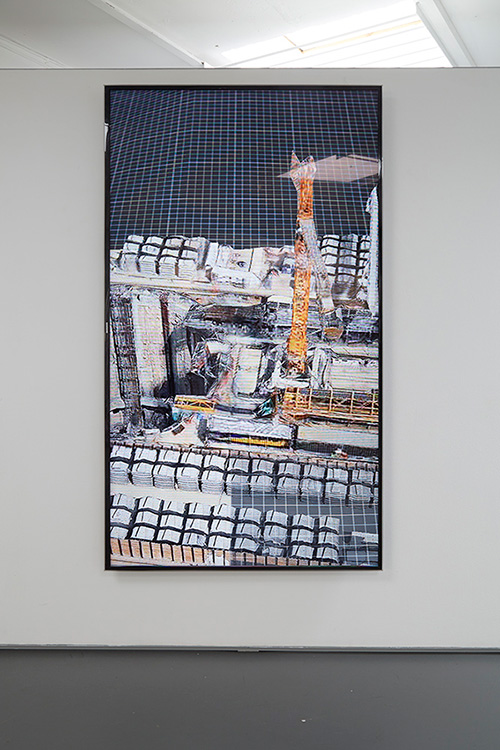 monday: we had been working on the ‘glitch’ images for quite a while in preparation for this residency, walking around london trying to make sense of the way in which the apple maps works. these images capture a glitch in the map software on mobile devices. we have developed techniques that allow us to control these glitches and capture them as ‘paparazzi’ each shot requiring extensive photographing in order to capture those iconic moments. 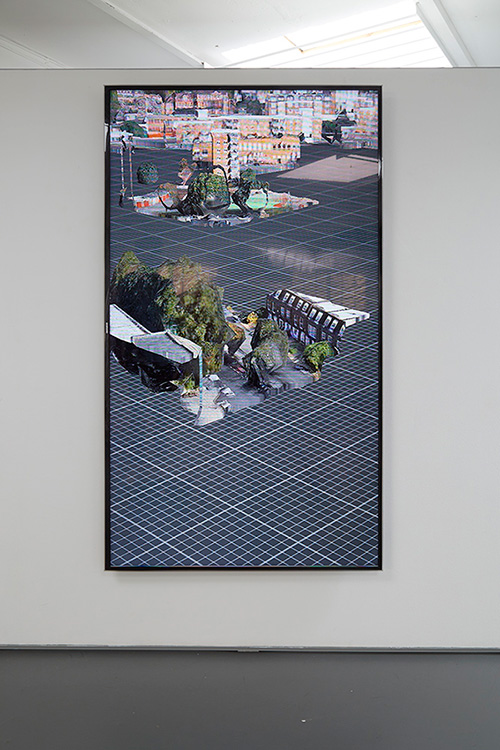 for us the images and the experience of taking these images have different motivations. the glitch, in its brief existence, opens a window into the inner workings of the system and, in doing so, it also makes evident its short comings. for example; the historicity of these maps, the device sells us the idea that what we are seeing in reality and in our device is one and the same thing, making us overlook the speed of change that is happening in real life. 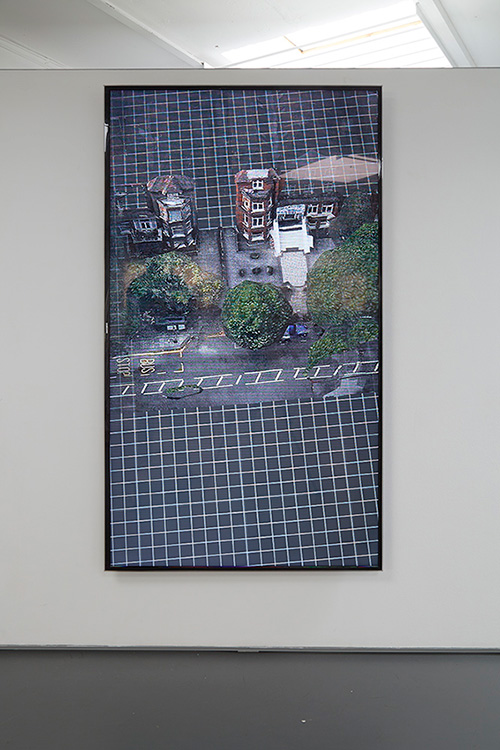 guessing when the image of the maps might have been captured becomes a forensic exercise, how advanced are the works, the knocking down or the building up. 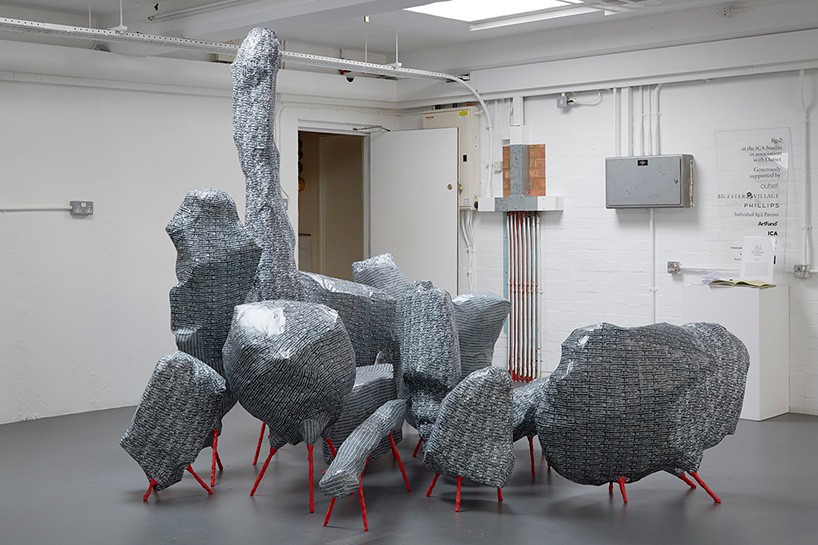 structures made from tape, bubblewrap and wood covered in stickers

tuesday: these built structures were rendered using stickers printed with sections of famous housing estates from london. the structures recall our ‘glitch’ images, this time as three dimensional models of a housing estate. as we started constructing this glitched dystopic city**,** we named it **’**the united estates’.

the idea kind of struck a chord with our perception of all the refugee crisis and the ‘scandalous’ supplantation of social housing estates for privately owned ones. as we build them a kind of background story starts forming in our minds that will link all the different bits of work. 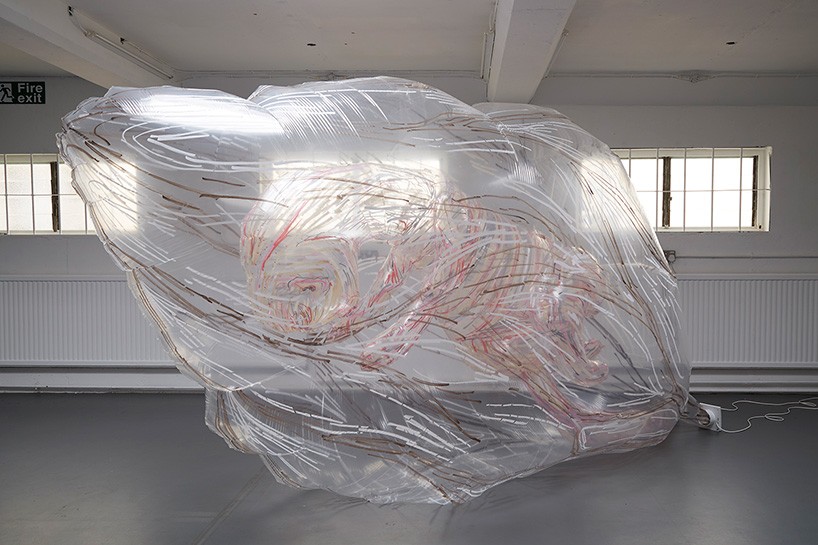 the user inside the womb – one inflatable structure inside another

wednesday: the birth of the user begins. ‘the user’ is a fictitious character that we use to refer to what could be consider a ‘glitch’ on our consumer society. it represents the moment when the consumer becomes a citizen. designing for a citizen is a very different concept than designing for someone who is going to consume your production.

in our work it takes different representations and the birth of the user is a follow up to ‘the rise and fall of the user’ an inflatable structure that inflates and deflates. we thought it would be interesting to try producing a double inflatable, one inside the other one, as conceptually it refers to this idea of the pressure of the environment over the individual. 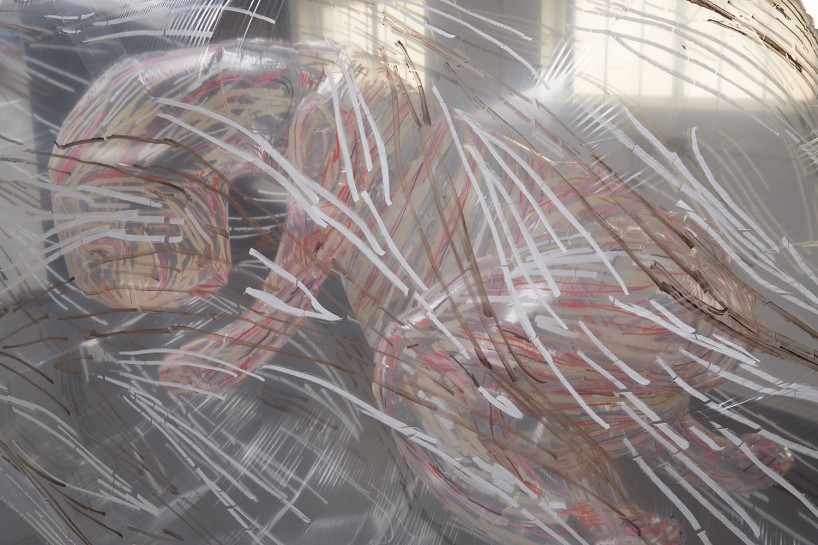 detail of ‘the user’

if we were to construct the user inside the womb you would be able to see how the difference in air pressure affects the two structures and by introducing a timer in the outside one we could enhance this symbiotic movement. producing the inflatables is swift, enjoyable, the complexity lying in the relationship between the pressure of the air of the inflatables, the air of the womb pressures the ‘user’ collapsing it, one space fighting with the other for air, this exchange keeps the whole environment in constant flux. 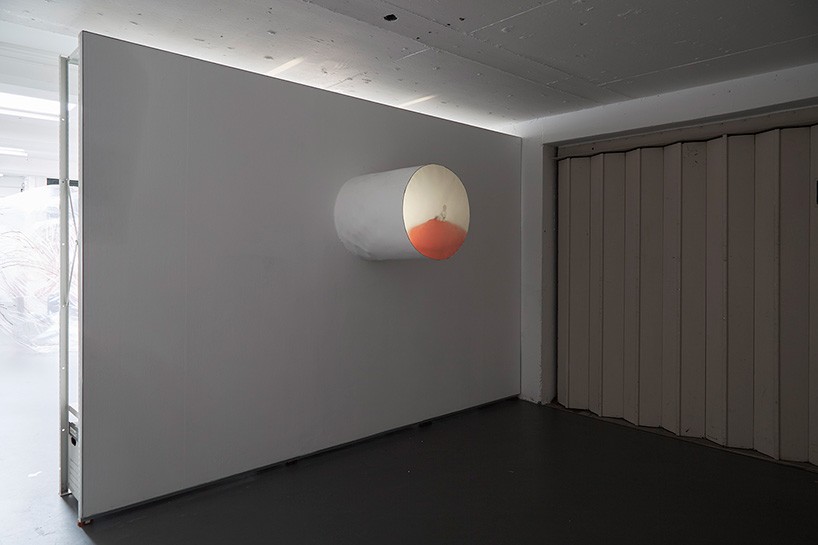 the creation of the user – camera obscura

thursday: we have a long time fascination the camera obscura. this fascination comes from its connection to the idea of a ‘real time cinema’. the camera obscura, in away could be considered a glitch, as it that coincidence of conditions joined to the materiality of the dark chamber that allows the image to form. 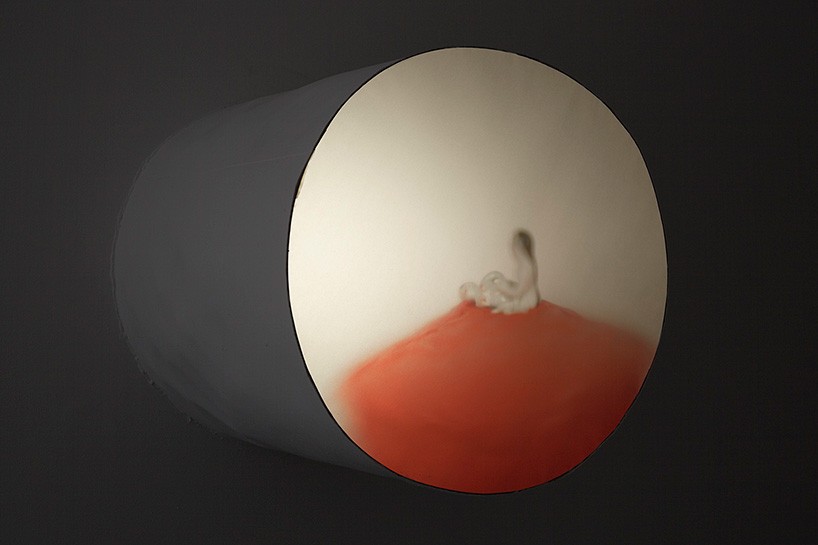 we developed ways in which to control that image, so it is no longer dependent on the ‘outside’ conditions both in terms of light and image. we are interested in the simple mechanics of this device, exploring it not so much on the optic side, but on the construction of a system that would allow us to create narratives that can generate a real time cinema. 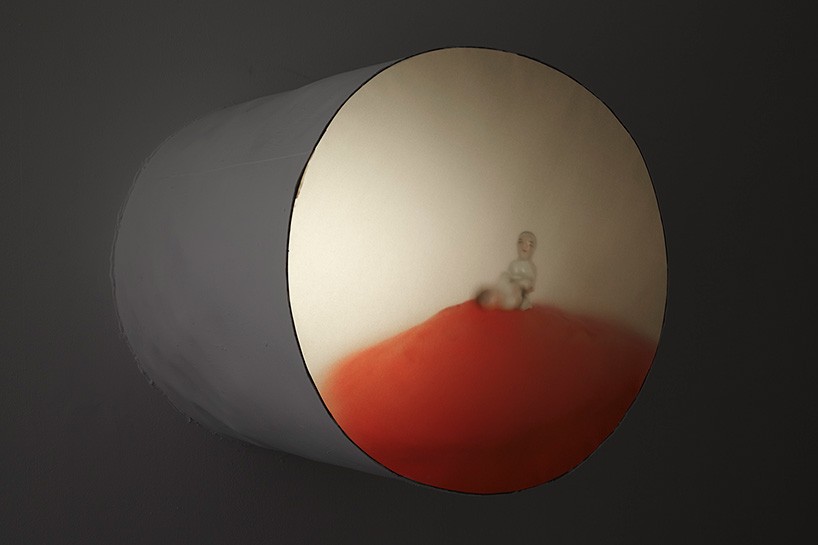 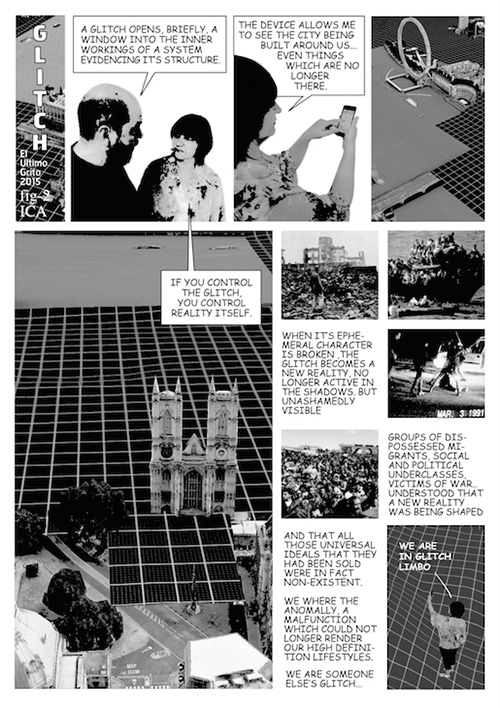 friday: we are produced comics for each of the pieces to unify them into one narrative. while producing the work we were developing different aspects of this story, some are clearly reflected on the work but others need another medium to be expressed, the narrative is the glue that allows us to bring together the logic of the work as a system and in turn to communicate and open the dialogue to others. 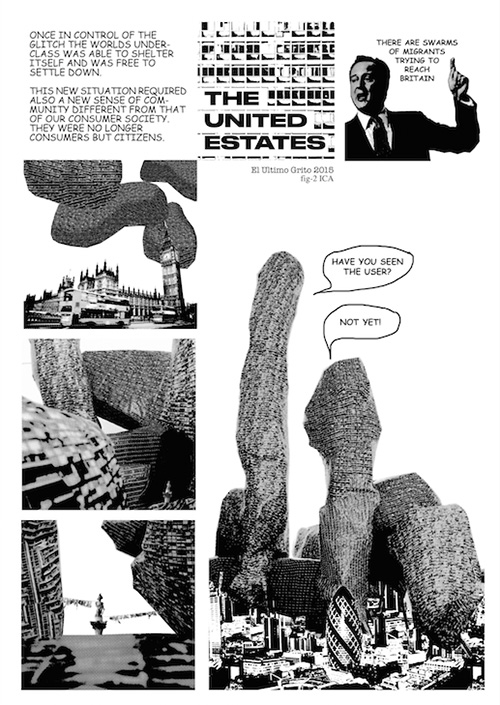 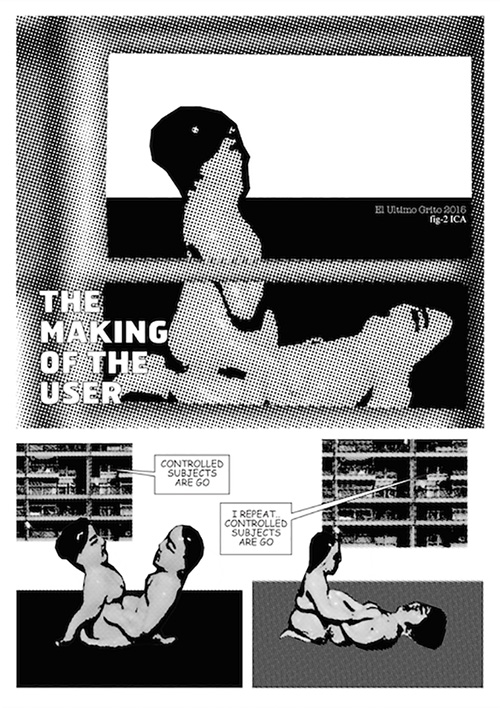 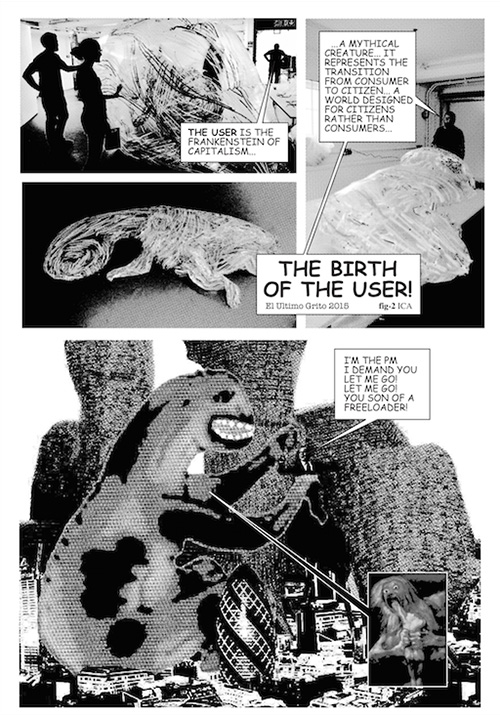 the show becomes a theatre piece in 4 acts, each of the acts has its own autonomy, they are independent works, but they are collided into a meta-narrative that explores and reflects some larger aspects and interests in our work. 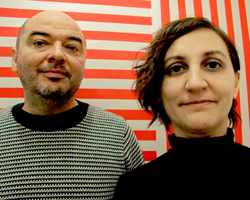 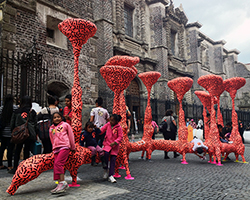 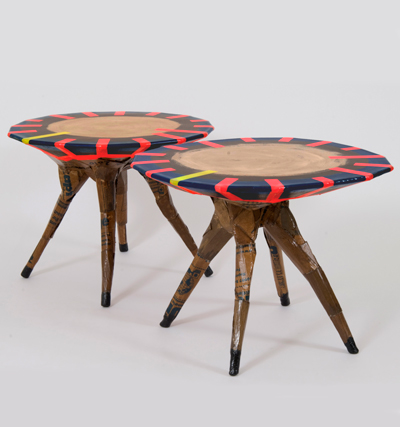 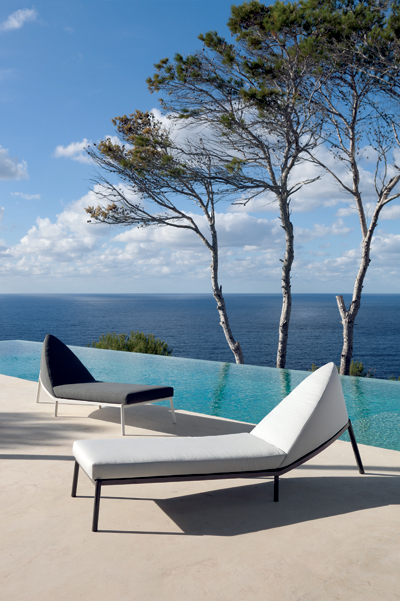