the CDO is an nationwide initiative that aims to promote design and position it as a fundamental tool for the social, cultural and economic development of the state of oaxaca, mexico. established in january 2011, it is the first governmental office dedicated specifically to design in mexico. it seeks to promote a design culture from its aesthetic point of view, while proposing to go beyond it and raise awareness of its great potential in building common welfare, social harmony and environmental sustainability.

it was decided to house the CDO inside an empty gallery inside the ex convento de santo domingo, the most important colonial buildings in the city of oaxaca. the director of the CDO, liz galván, commissioned emiliano godoy  to design the interior design of this space, who collaborated on this project with the design and fabrication company tuux. the first stage of this project, called ‘the net’ is now complete, while the furnishing and task lighting should be completed in 2013. 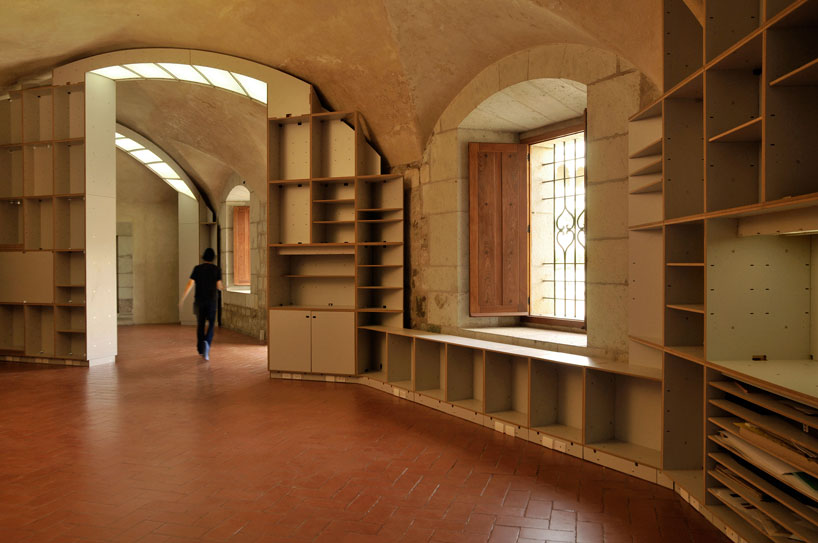 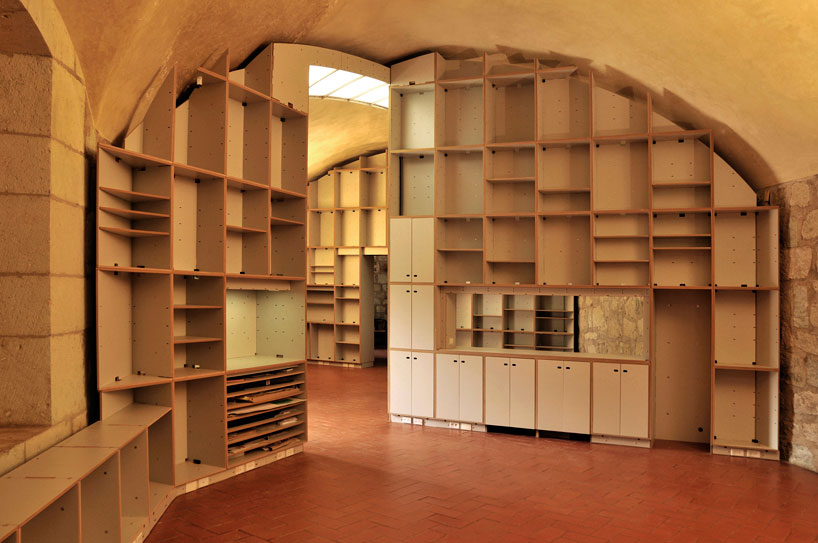 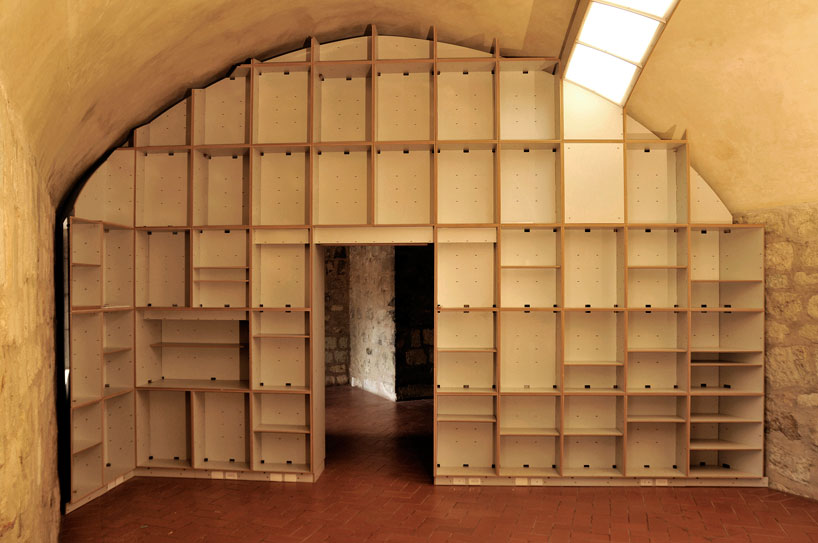 characterthe project for the office of the CDO, located in one of the vaulted bay, facing the ethno-botanical garden of santo domingo, attempts to address not only the practical needs of the center, but also its commitment to innovation and transparency, as well as a reassessment of the role of public service and governmental work.

in accordance with the values described above, the design project is equally honest and transparent with the proposed level of investment, which was extremely small compared to most government and private offices of similar dimensions.

in this design, a dialog was established with the architecture and strong identity of the ex-convent. formally, this dialog emerged from certain monumental features of the ex convent: outlining and enhancing the arbors through the use of arcades, and reminiscences of the thick quarry walls in the construction of the buttresses that support the arcades.

a in-kind sponsorship of the company masisa was crucial to help carry out this stage of the project within budget. this alliance was established because masisa has environmental and social policies in full accordance with the values of the CDO and the design team. specifically, the material chosen –decomdf masisa– is made from industrial waste fibers and has a E-1 certified for low voc emissions. this is important for its minimal environmental impact, and because its low emissions contribute to a healthy working environment. 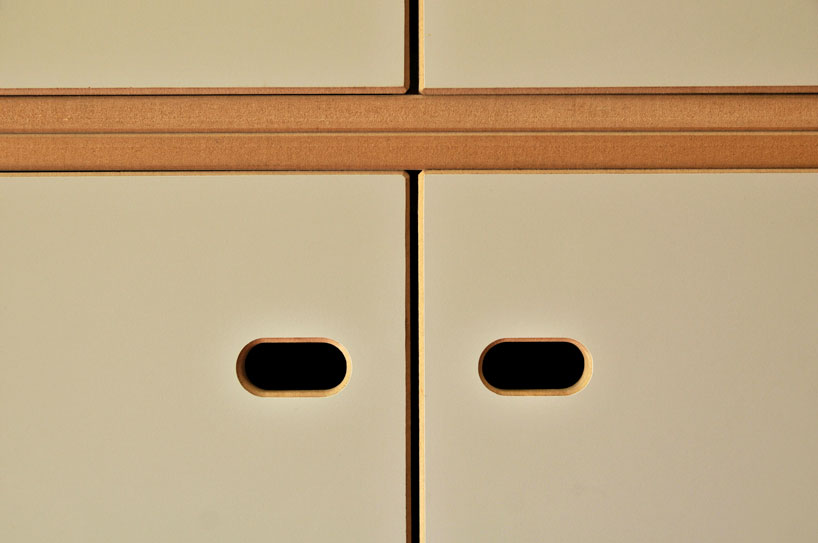 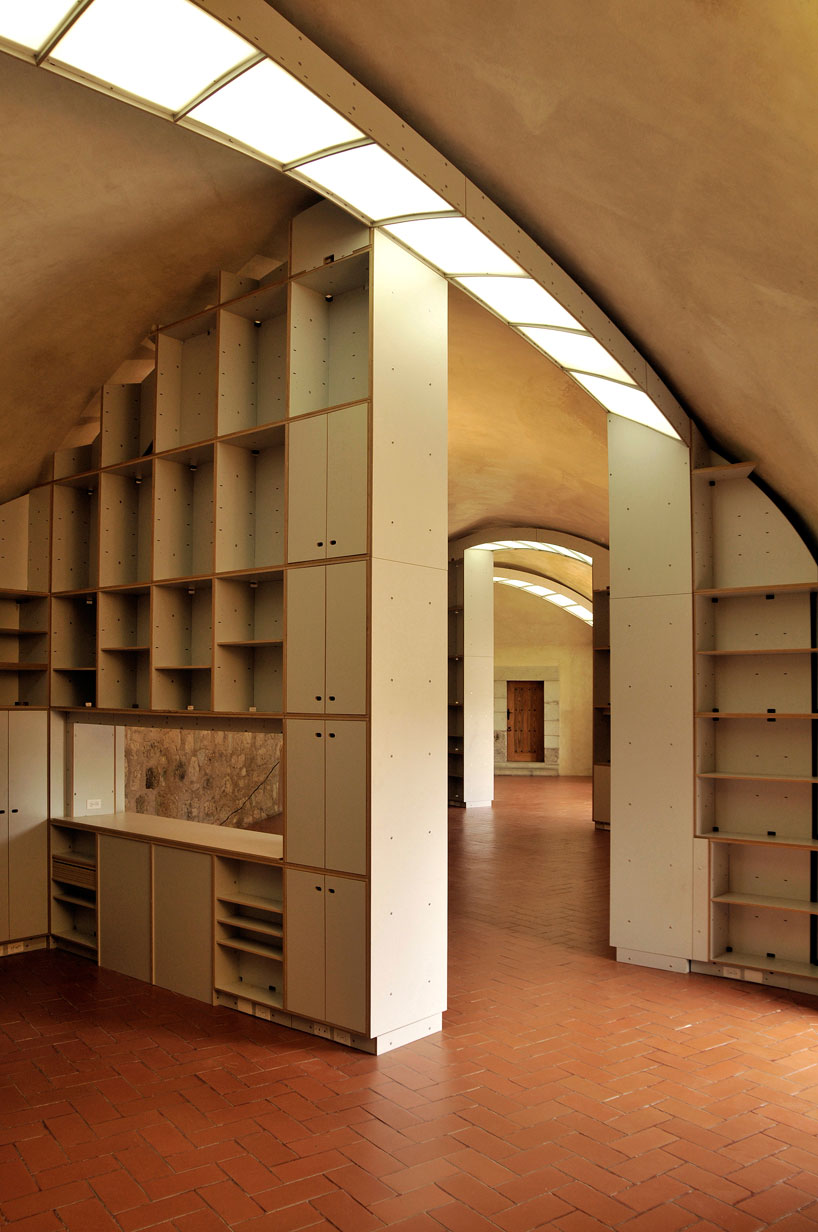 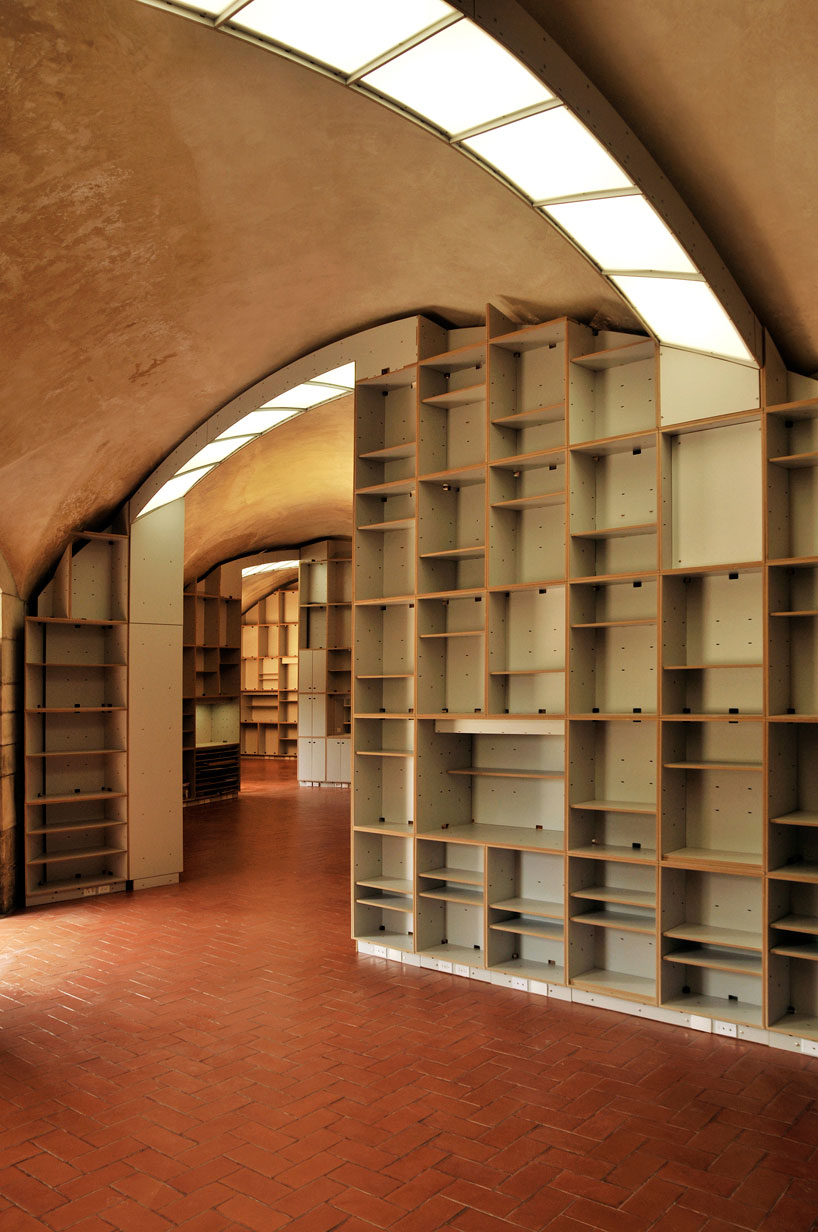 specific challenges of the spacethe 200 square meters space is a single, long vault with a small private room on one end. it had electrical outlets along the walls at regular intervals, allowing us to reduce the power wiring needed for computers and peripherals. however, telephone and data networks required specific planning, since all the outlets were located in one corner of the space, from where they would have to be distributed to all workspaces.

due to the heritage of humanity character of the colonial building we were not able to touch the walls or ceiling with any permanent structures, nor create any mechanical anchors to the building. this restricted the use of common strategies for the distribution of electricity, lighting, voice, and data; such as floated floors, running pipes through the walls and false ceilings.

furthermore, any and all elements of the design should fit through the gallery’s narrow door, be assembled on-site and carried by hand from the street 200 meters away.

therefore, an essential requirement of the project was to generate a flat-pack, freestanding structure to distribute electricity, voice, data, and general lighting. 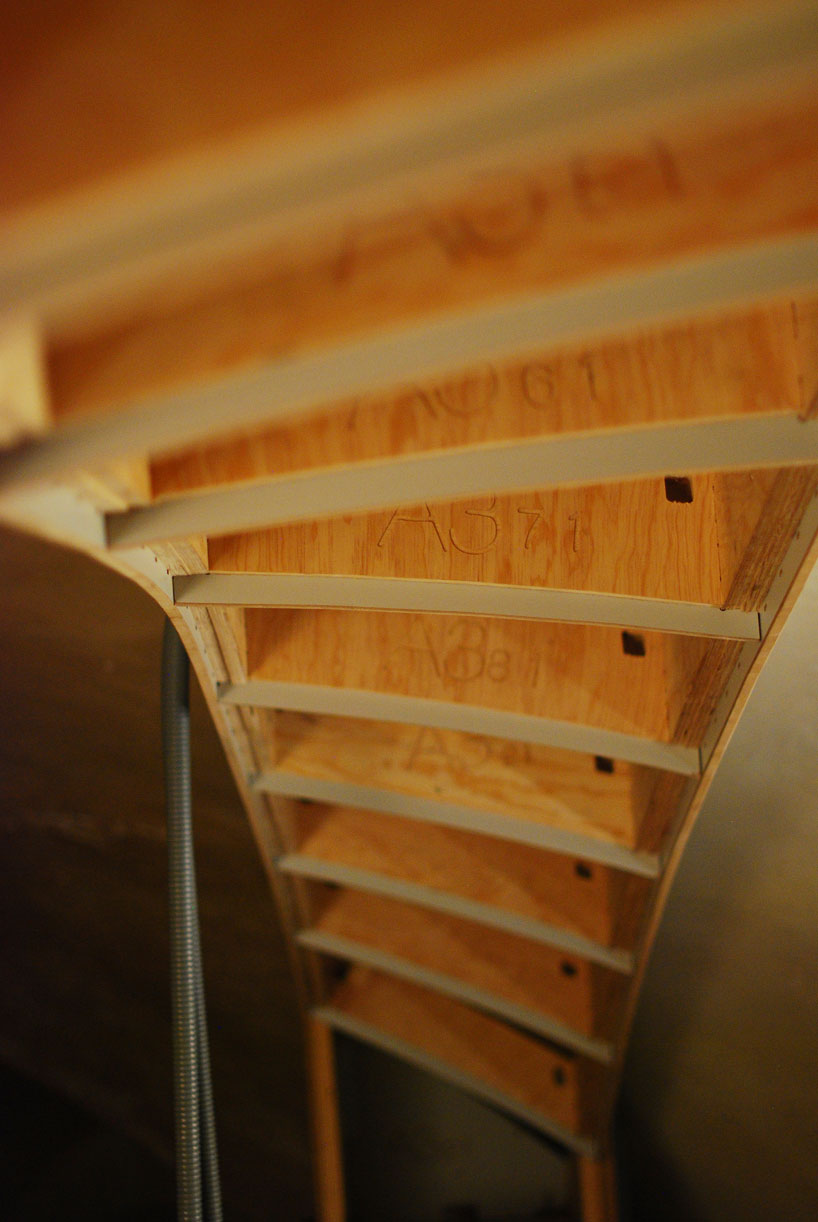 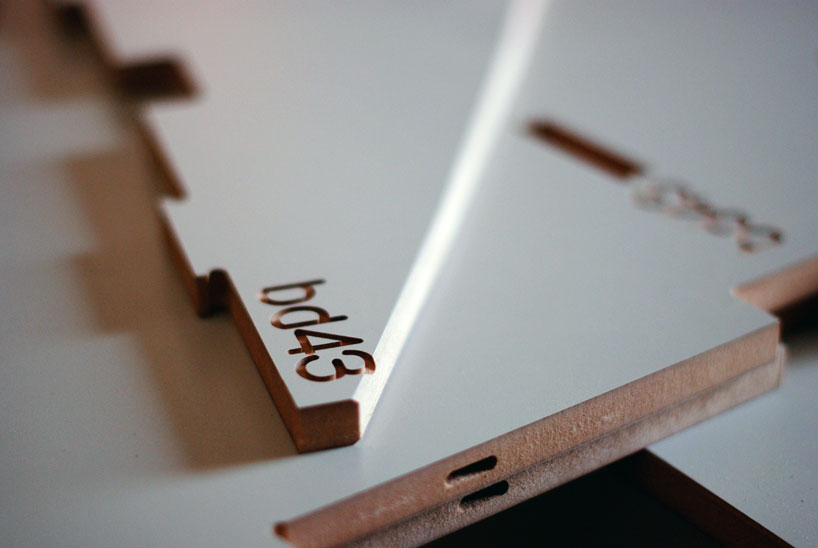 characteristics of the designthe proposed arcades and buttresses traverse the vault breaking down its orthogonality to suggest a subdivision of the space by areas (management, administration, projects, design, and systems). the arcades enhance the scale of the arbor, while the cabinets supporting them play with openings and truncated planes that let you dominate the extent of the bay from almost anywhere. a kind of metaphor for a monumental structure founded on transparency and dynamism.

the design emerges from a basic module that is assembled on site without the need of hardware, which allowed for all the assembly to be done inside the space in less than two weeks, without disturbing the ex-convent’s daily routine. these modules are joined by four connecting screws in each of their four faces, creating a rigid and strong structure capable of supporting the weight of the arcades and the material to be stored. separated approximately 10cm from the roof and the walls, these modules are truncated outlining the shape of the barrel vault.

the buttresses are bookshelves of up to 4.5 meters high that distribute electricity, voice and data through their base, and include spaces for locked storage, illuminated multipurpose stations, and a kitchenette with room for a fridge, trash bins and cleaning supplies.

this structure was named the net because it works as such: the arcades carry the wiring from one side to another and between the extremities of the long vault imperceptibly, also providing the general lighting. the net is wired internally with electricity, voice and data. in addition to the fixed installations, it allows to temporarily wire any compartment individually, and offers the flexibility to incorporate outlets for electricity, data and communications wherever needed. it also provides specific areas for the network server, equipment storage and other special requirements.

materials were selected according to their environmental performance, low cost, low maintenance and ease of repair or replacement. particularly, the deco MDF line by masisa represents the bulk of the installation. this material was chosen in a light gray color to soften the monumentality of the net, harmonize with the tone of the quarry walls, and allow graphic legibility of the elements to be stored. 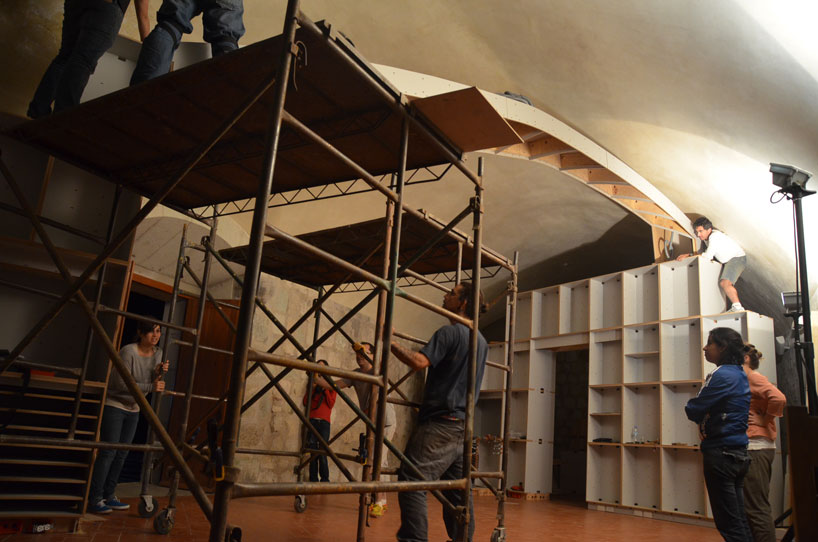 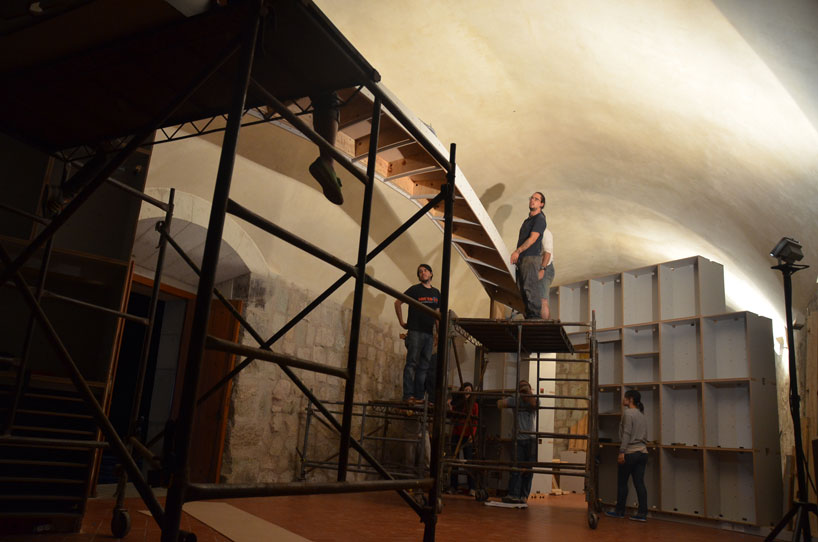 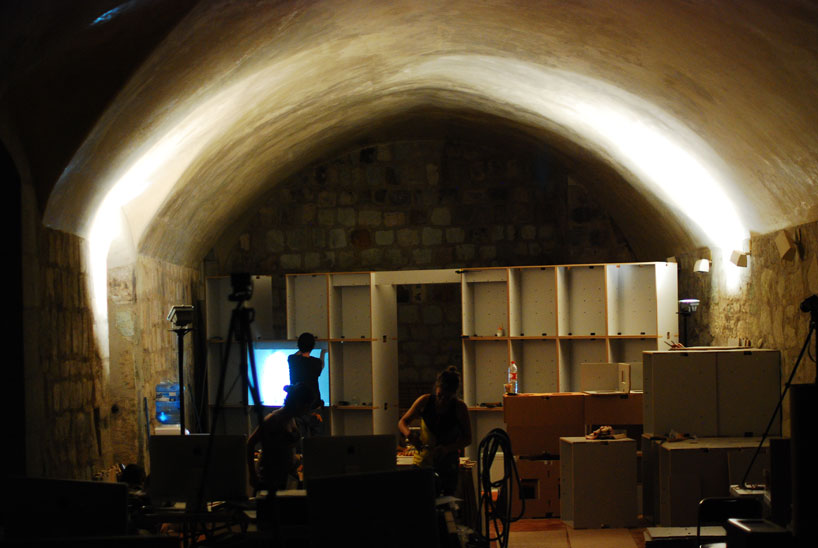 distribution of areas and general lightingthe net also creates different areas within the vault of the CDO, by means of divisions with different degrees of enclosure and transparency, thus facilitating the creation of workgroups by areas or divisions. this is important in crowded offices to reduce problems associated with open-plan schemes, where the combined noise, visual distractions, and lack of privacy impair overall performance and productivity.

this distribution plan can locate 28 individual workstations and five large workgroup or conference tables, and may also be modified both in location and amount of workstations. moreover, the asymmetry of the structure and the high arcades provide sufficient flexibility for the space to adapt to reasonable changes in the composition of the work teams. 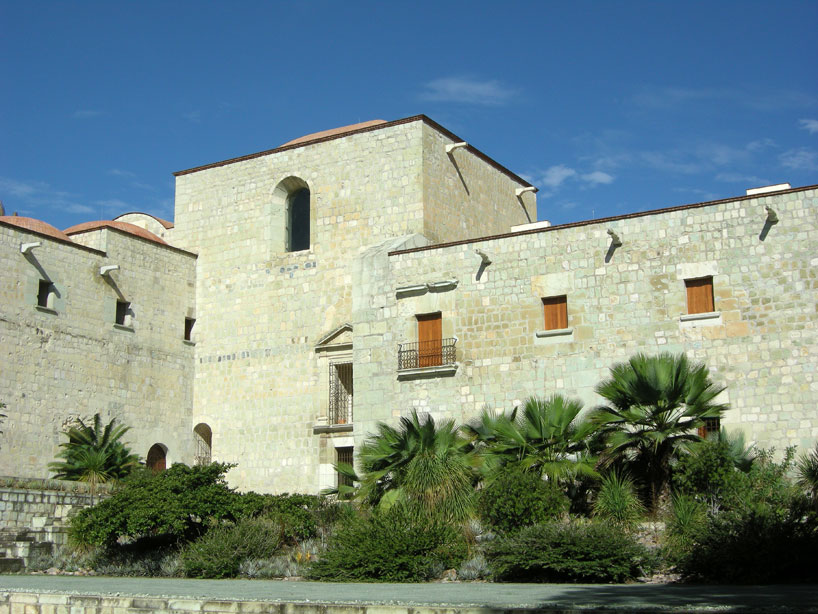 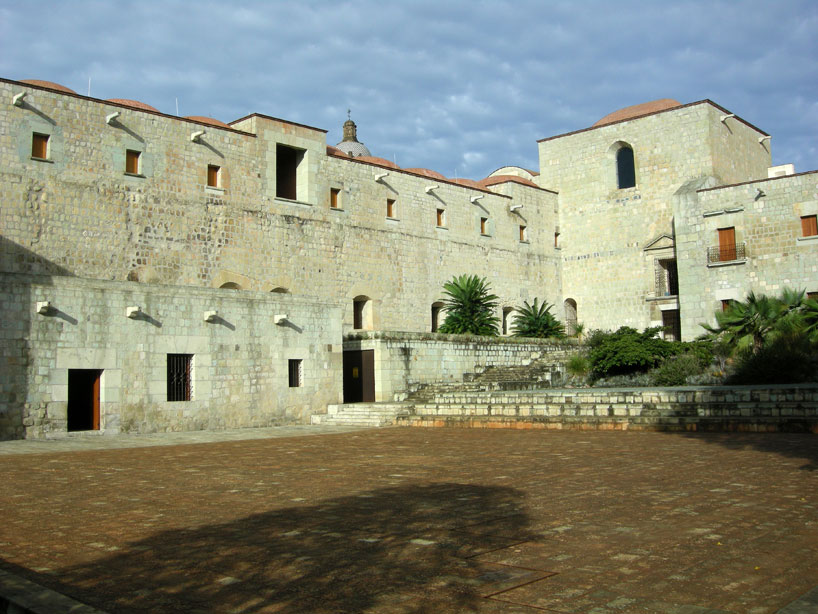 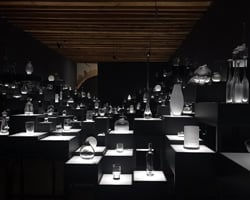 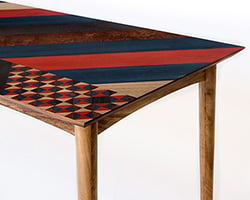 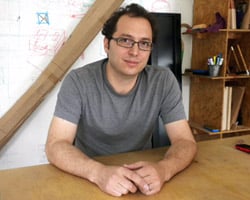