floris wubben has developed a ‘pressing machine’ that extrudes epoxy-clay objects. combining different profiles, and adding tint to the long-lasting material, enables him to create an enormous variety of exclusive pieces of various shapes and color combinations–the composite material is pushed through the forms which defines the resulting form as well as its hue. unlike its first appearance, these one-of-a-kind works are surprisingly very lightweight. the pressed project facilitates a short and fast manufacturing process from ‘semi-manufactured goods’ into a finalized product. the dutch designer demonstrated how the system works at the central exhibition of DMY berlin design festival 2013 at airport berlin tempelhof. 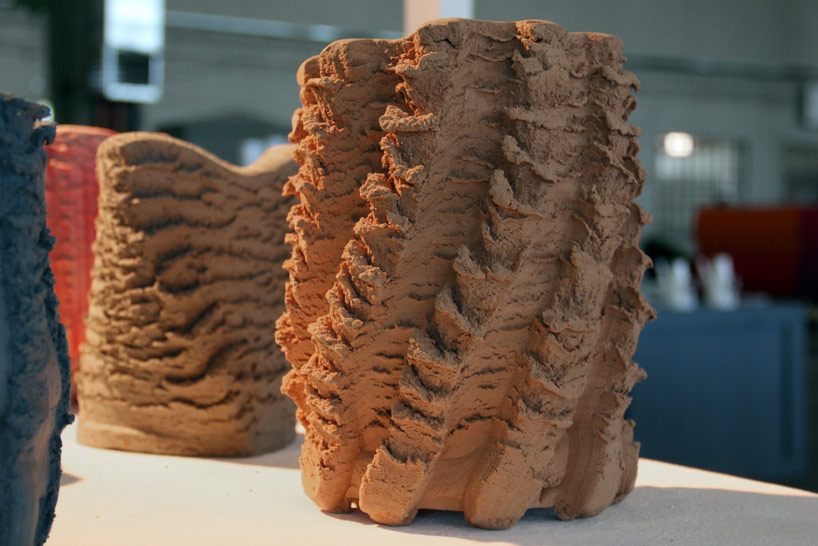 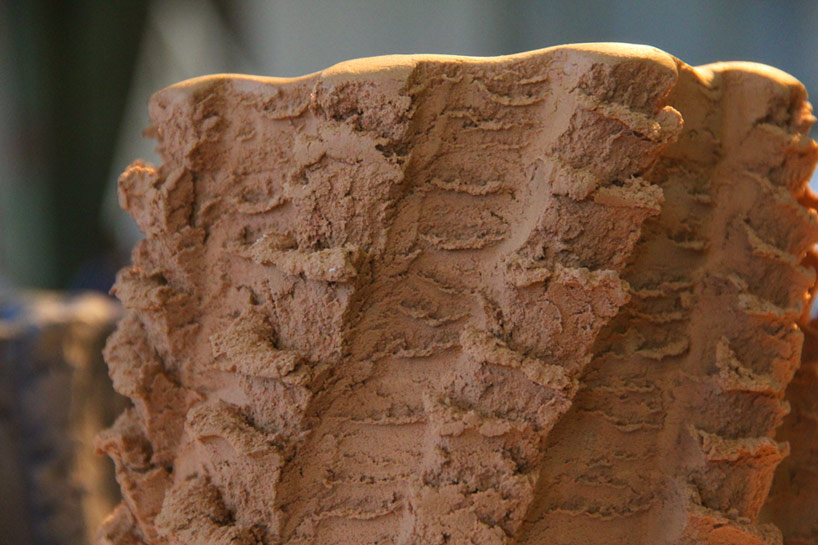 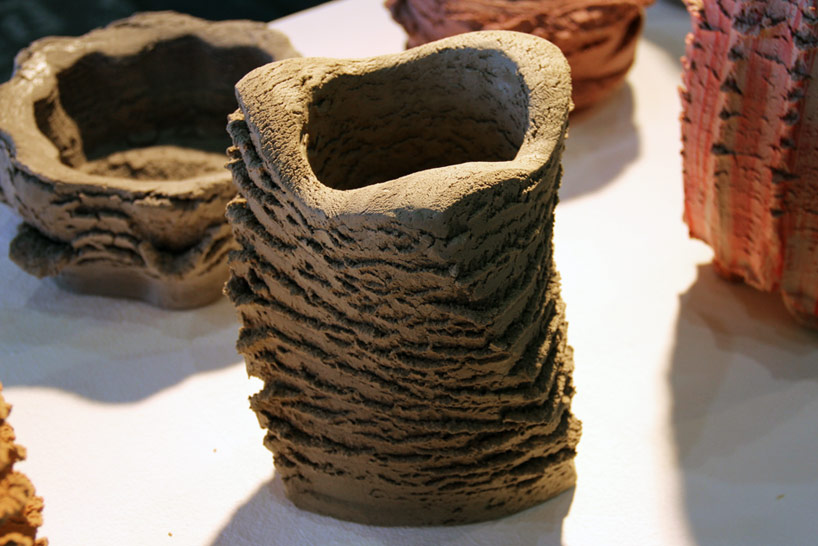 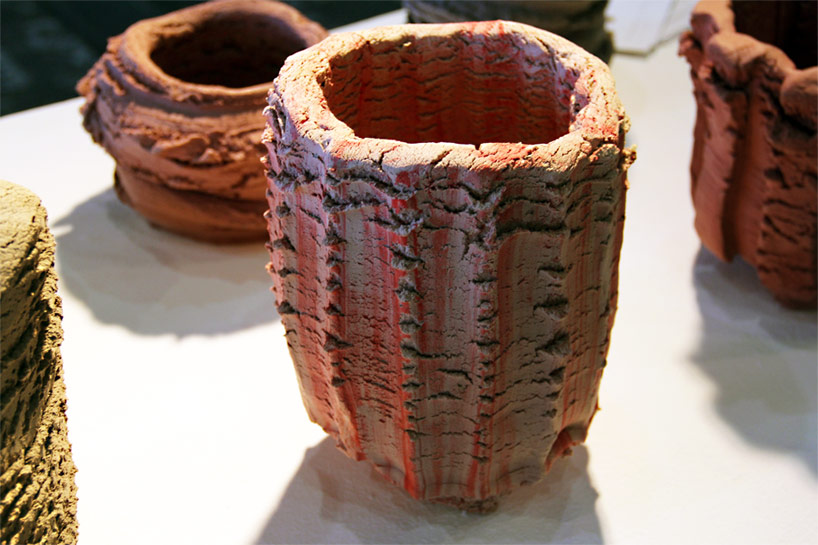 … and by adding tintimage © designboom 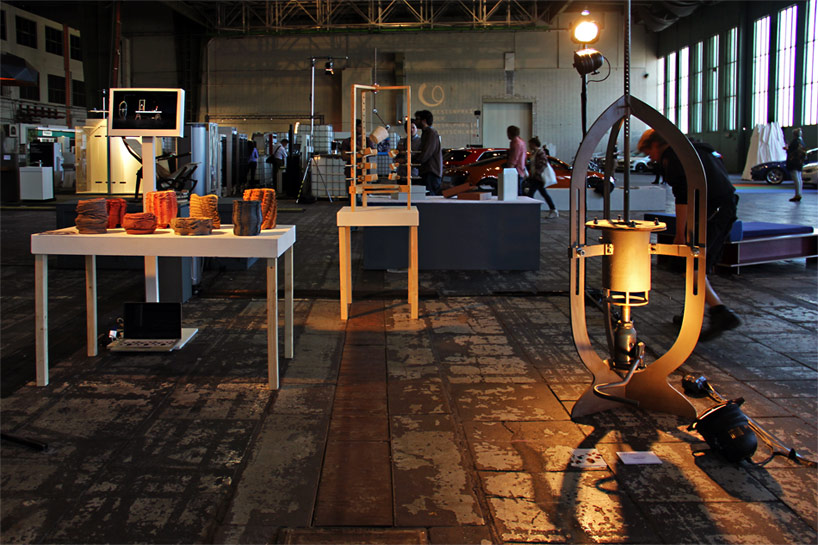 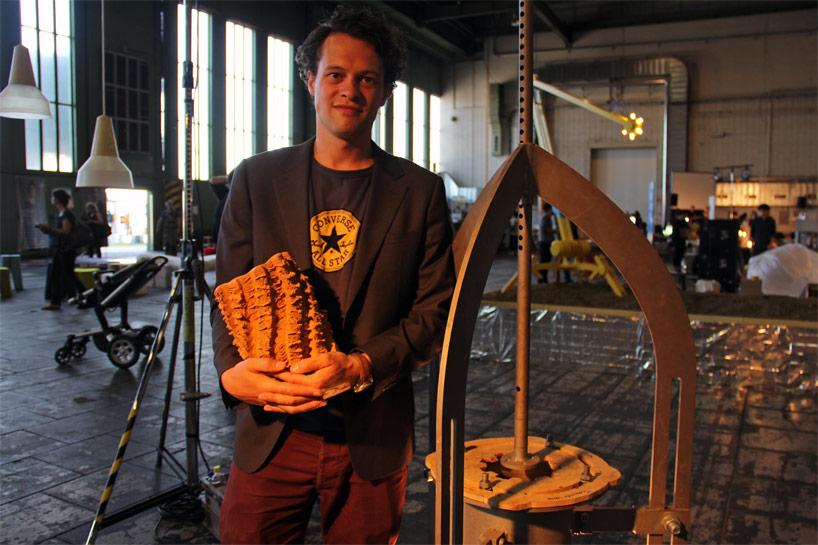 floris wubben with his ‘pressing machine’ at DMY berlin 2013 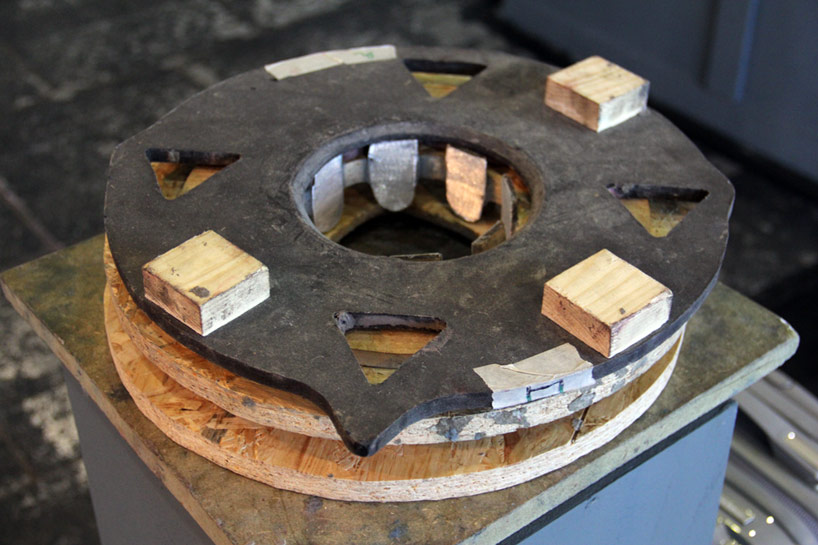 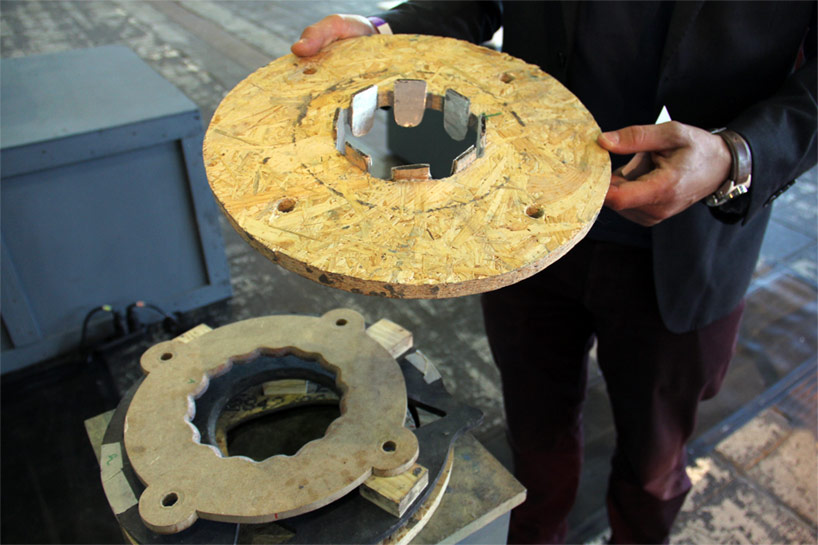 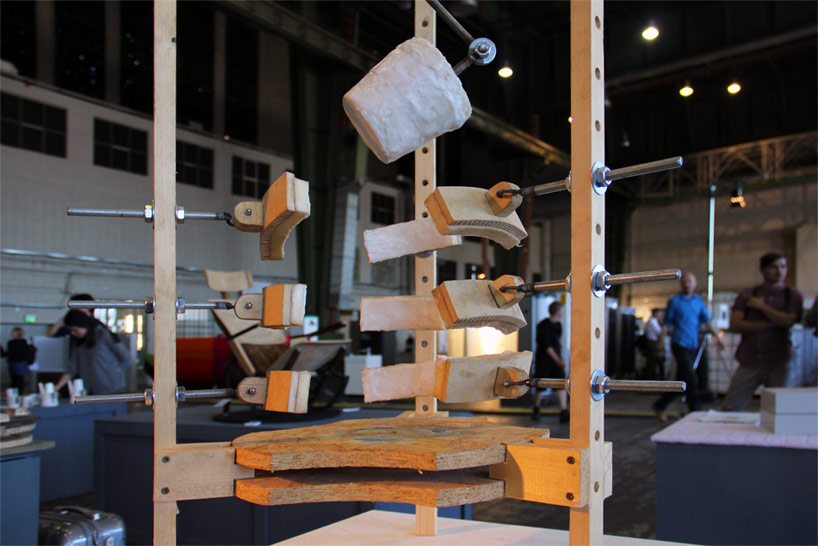 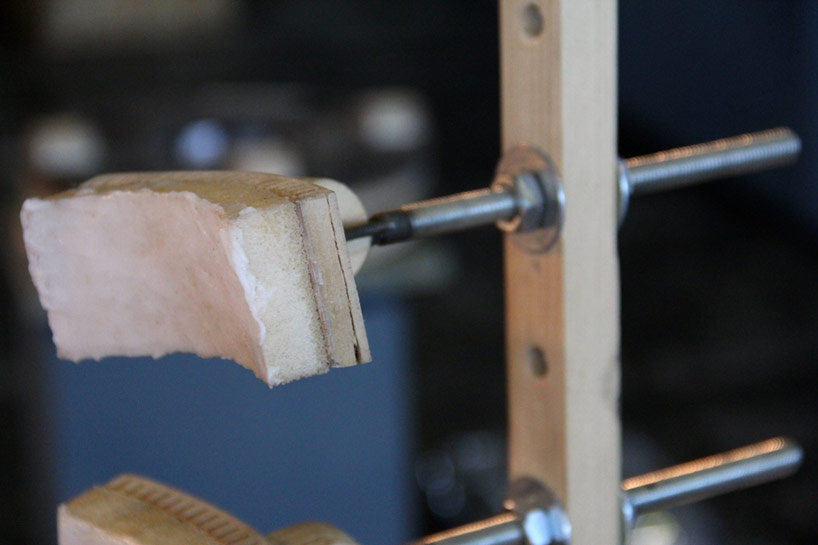 first shown at the 11th DMY international design festival at berlin’s historic tempelhof airport:from june 5 to 9, 2013 DMY international design festival presented more than 500 designers from around 30 countries who show pioneering products and prototypes at berlin tempelhof airport. for the second year in a row, DMY hosted the design award of the federal republic of germany and presented all submissions and nominations in a large survey exhibition, which were also on display at berlin tempelhof airport. as an additional attraction, DMY presented in cooperation with create berlin the 2012 successfully launched ‘night shift – long night of design studios’: more than 50 studios opened their doors on the evening of june 6 throughout berlin. 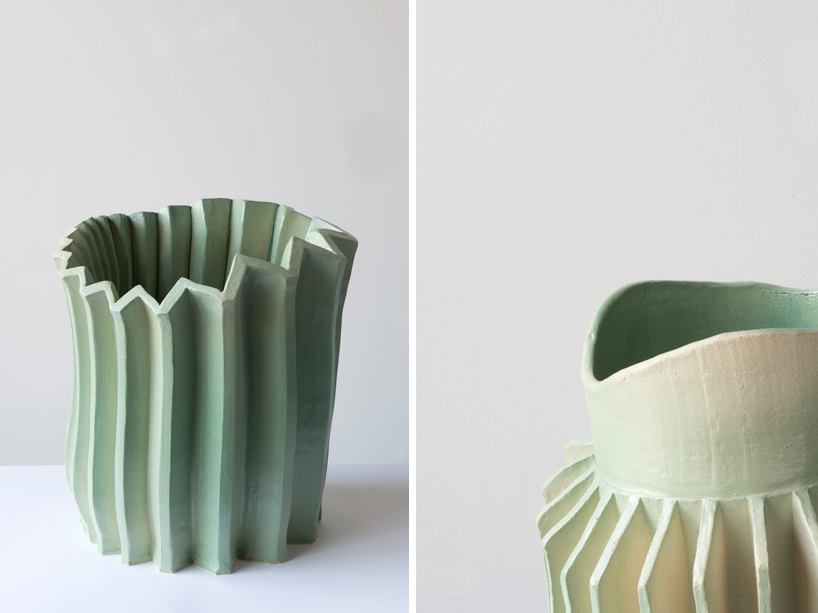 UPDATEthe press project will be exhibited at the gallery of rossana orlandi during milan design week 2014. a collection of 10 large vases are on show together with the press machine. for this collection specific glazes and new ways to press with the machine were developed.

the first pressed vases (see above) where created with epoxy clay, while the next ones are made from ceramic. as the production process and the machine are exactly the same in both cases, the differences in shape/ appearance are mainly created by the properties of each material. 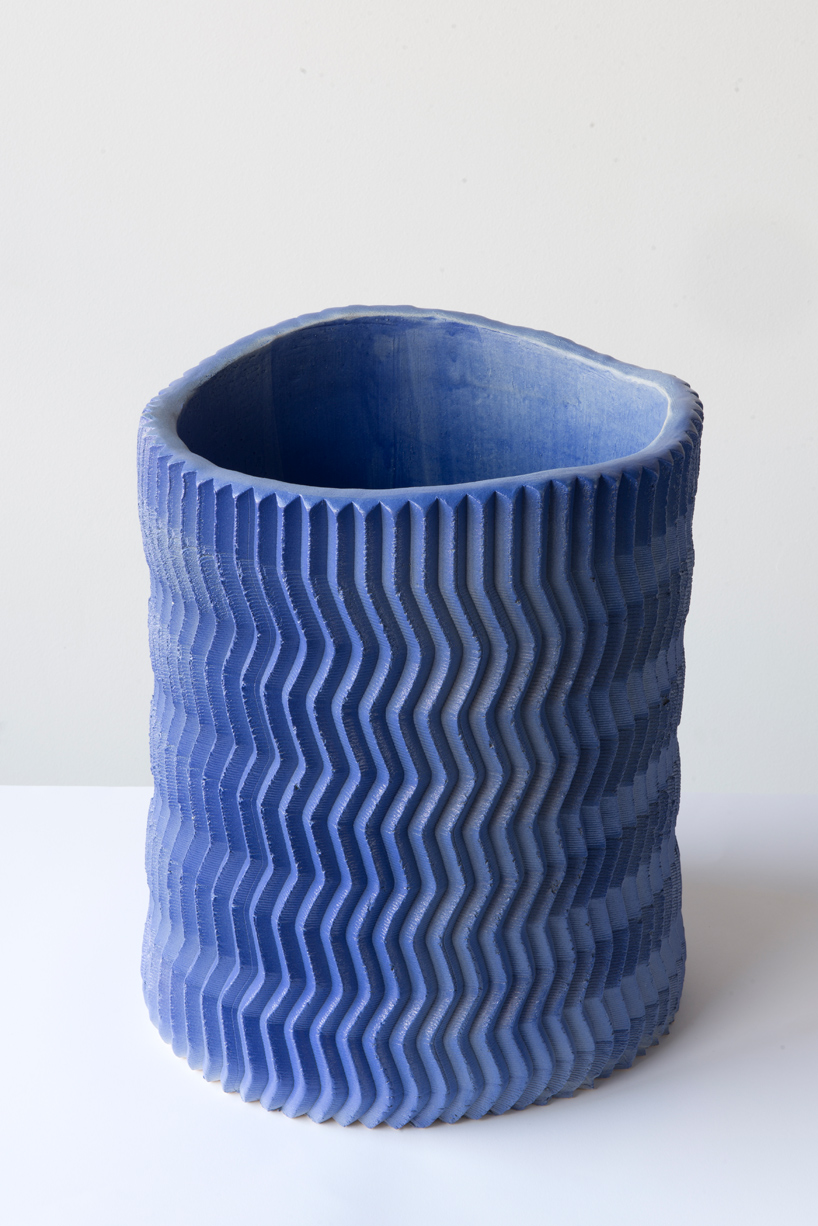 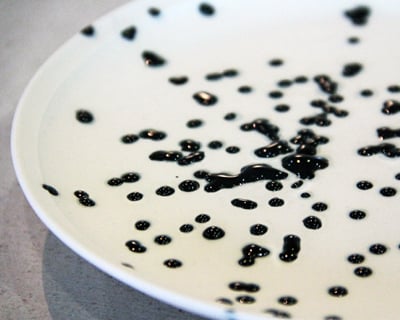 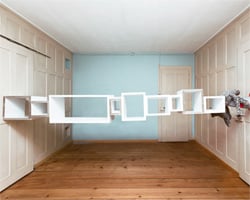 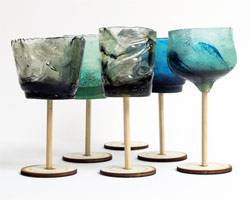 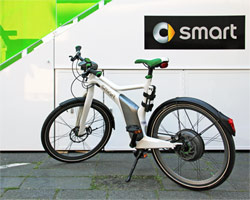 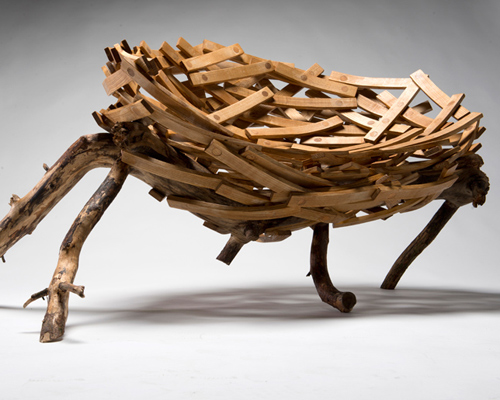 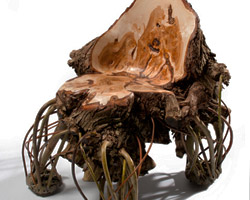