fortuny makes the finest printed fabrics in the world, handmade in venice since 1922. on the occasion of the 17th venice architecture biennale, the legendary manufacturer presented its latest collection ‘imago’, set within the private garden at fabbrica fortuny in venice.

designboom attended the unveiling and spoke with mickey riad, co-owner of fortuny, who shared the whimsical 100-year-old history of one of venice’s best kept secrets, and delved into his work that is continuing the legacy of timeless artistry. 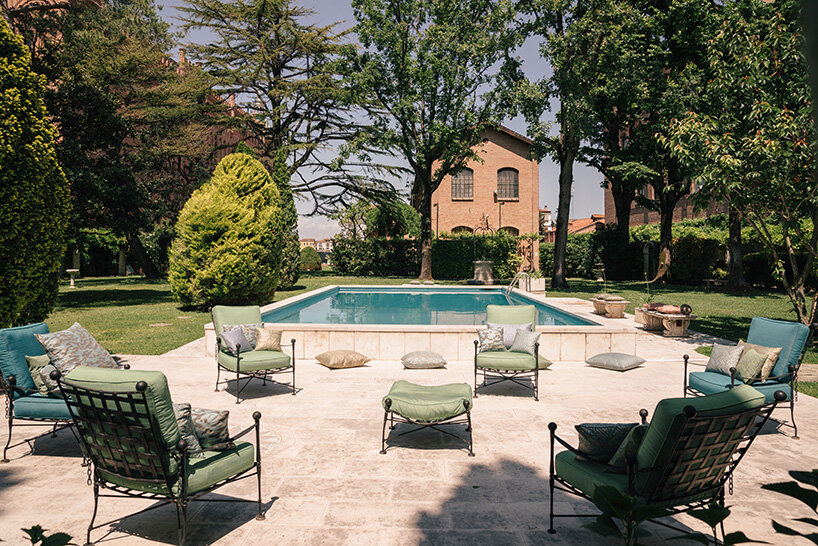 fortuny’s imago collection takes inspiration from a butterfly which, freed from its cocoon, begins a new journey. product of the COVID-19 lockdown, the new line of fabrics emerges free and colorful with pieces that create a dialogue with those places we couldn’t visit because of the pandemic but are dear to the history of the venetian brand. from the fresh flowers of mexico city to the traditional architecture of japan and all the way to paris and its bistros, the designs recall a world waiting to be re-discovered.

the traditional soul of fortuny continues approaching the universe of contemporary interior design with ten archival models with historical patterns designed by the founder mariano fortuny that are revisited in twenty-five new colors of the printed cottons intended for furnishing. majestic prints, metallic details and colors that evoke different worlds among which the verdant green, the sunset pink and the adriatic blue stand out. 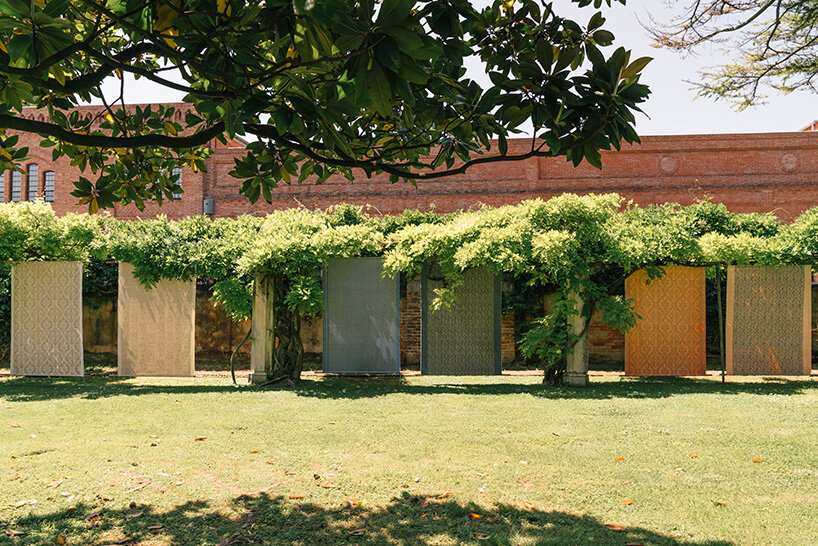 born into a renowned family of artists in 1871 in granada, spain, mariano fortuny devoted himself to fashion design. early on, fortuny showed great curiosity for understanding things and approached his work through the perspective of art, technology and science. in 1889 he moved to venice where he began his work in fashion and textiles,  and his career spanned over fifty years.  when he passed away in 1949, he had already reached worldwide fame thanks to his inventions which included the hand-pleated delphos and peplos gowns and his hand-painted fabrics like lucrezia, de medici and moresco which adorned museums, churches and homes. 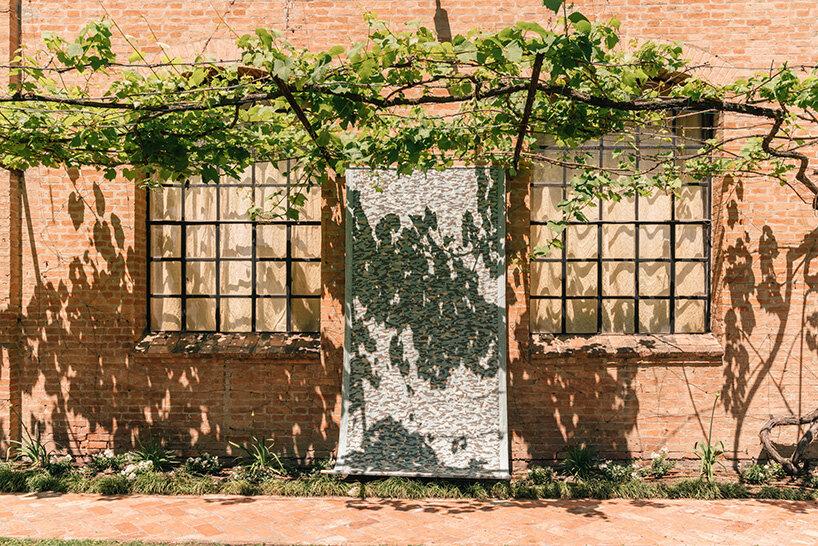 DESIGNBOOM (DB): WHAT FASCINATES YOU ABOUT FORTUNY’S PRODUCTION?

FORTUNY / MICKEY RIAD (MR): I’m an artist, I’m a musician. and I love color. I fell in love with venice, I fell in love with these fabrics. to have a part in preserving such a legacy is really something that our family took quite seriously. it is a great honor for us. (laughs) this really spoke to the creative side of my brain. also the ability to play with color and to revive a technique that was developed over 100 years ago. yes, all that and being able to work in a city like venice was really special. DB: WHAT IS YOUR FAMILY HISTORY AND HOW DID YOU FIRST GET TO KNOW FORTUNY?

MR: my father and mother, were born and raised in egypt and married in november of 1968. my mother was 19 and my father was 23. they decided to move to the US as they felt that as coptic christians they were not going to have many opportunities available to them. so they sold my mother’s wedding ring to have enough money to buy their plane tickets. they were heading to colorado where my father had an aunt living, but he had a cousin in new york at the time, who said >why don’t you stay with us for a week or two before you leave<. and they never left, they stayed in new york.

my father wanted to be an attorney, so he decided to study under an attorney to qualify for the bar. he was hired immediately by an attorney who was the lawyer for the countess, who was the owner of fortuny at the time. the countess took over the company after fortuny died in 1949. and then countess elsie lee gozzi was asked by mariano fortuny’s widow to take over the company so that fortuny’s work could continue. she was an american woman who was selling fortuny’s fabrics and dresses from her boutique in manhattan. the lawyer, that my father was studying under, was also the lawyer for the countess, and unfortunately later this lawyer made ‘a mistake’ that infuriated the countess. she preferred my father to handle all of her affairs. yes, she became his first client. at the time my father was 26 years old and they forged a wonderful working relationship. my father was a honorable man, very honest, with a lot of integrity. he was not greedy, not motivated by money — the countess  really trusted him. ten years later, in 1981, she was getting quite old and asked my father to purchase the company as she was worried that when she would die, the company would be swallowed up by a larger corporation. … and stripped from the things that made fortuny so special. my father said >no, I’m a lawyer in new york; I don’t know anything about fabric or art; what am I going to do with a company in italy? thank you, but no, thank you<. 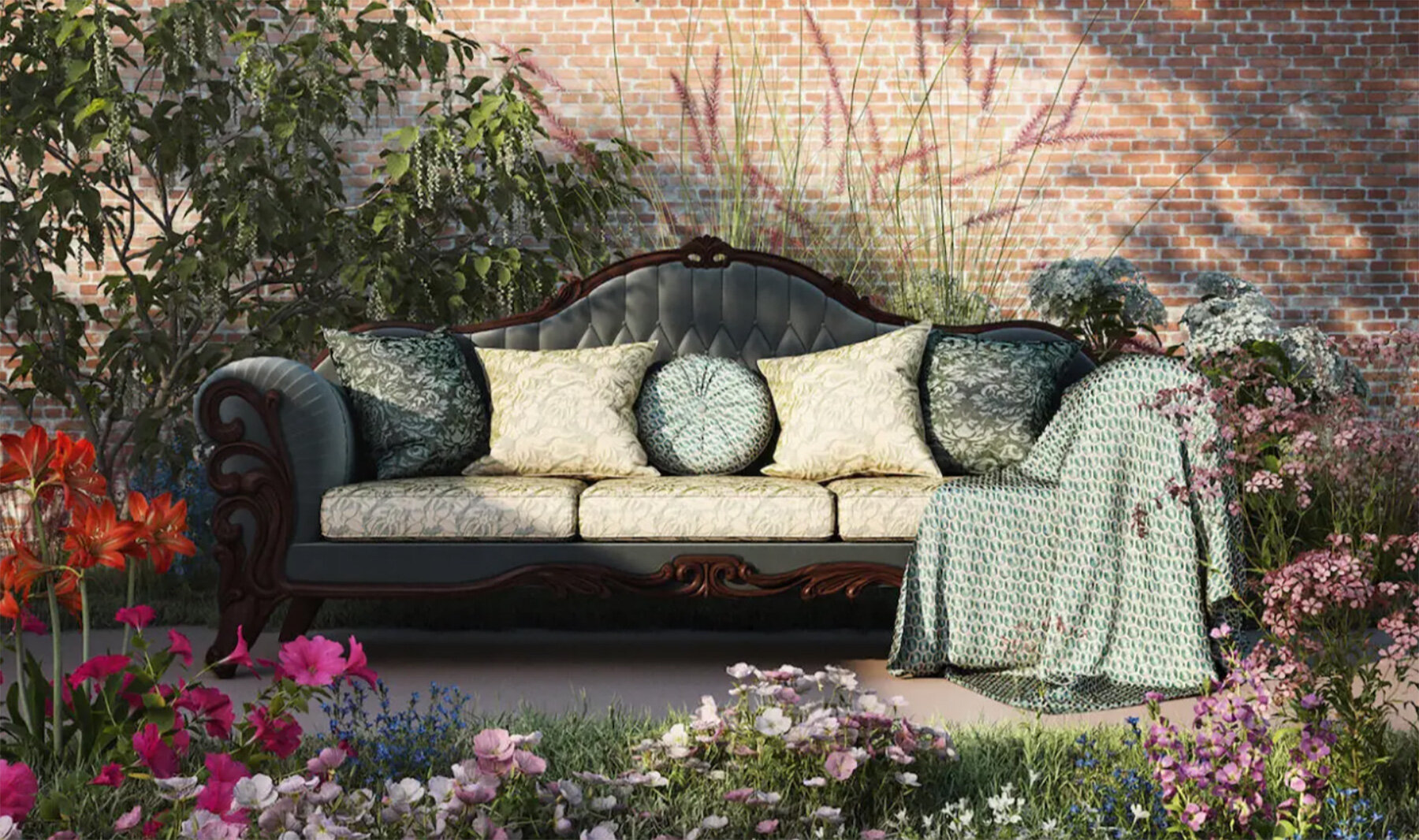 (MR continues) letters went back and forth between the two of them for years. finally, in 1988, he agreed to buy the company but didn’t involve himself too much until the countess died in 1994. after that, my family became involved in the day-to-day operations: we had an uncle who came to venice to run the factory for a little while, and I would come every year and immerse myself in the fortuny world.

my uncle left in 2003, so I moved to venice, and lived here for eight months, while taking over the production. we had a lot of production issues that I had to deal with, but fortunately we managed to resolve them. little by little, my brother and I brought this very old sleeping giant back to life. it was really not easy, but it was a labor of love. fortuny is a part of venice and venice is a part of fortuny. 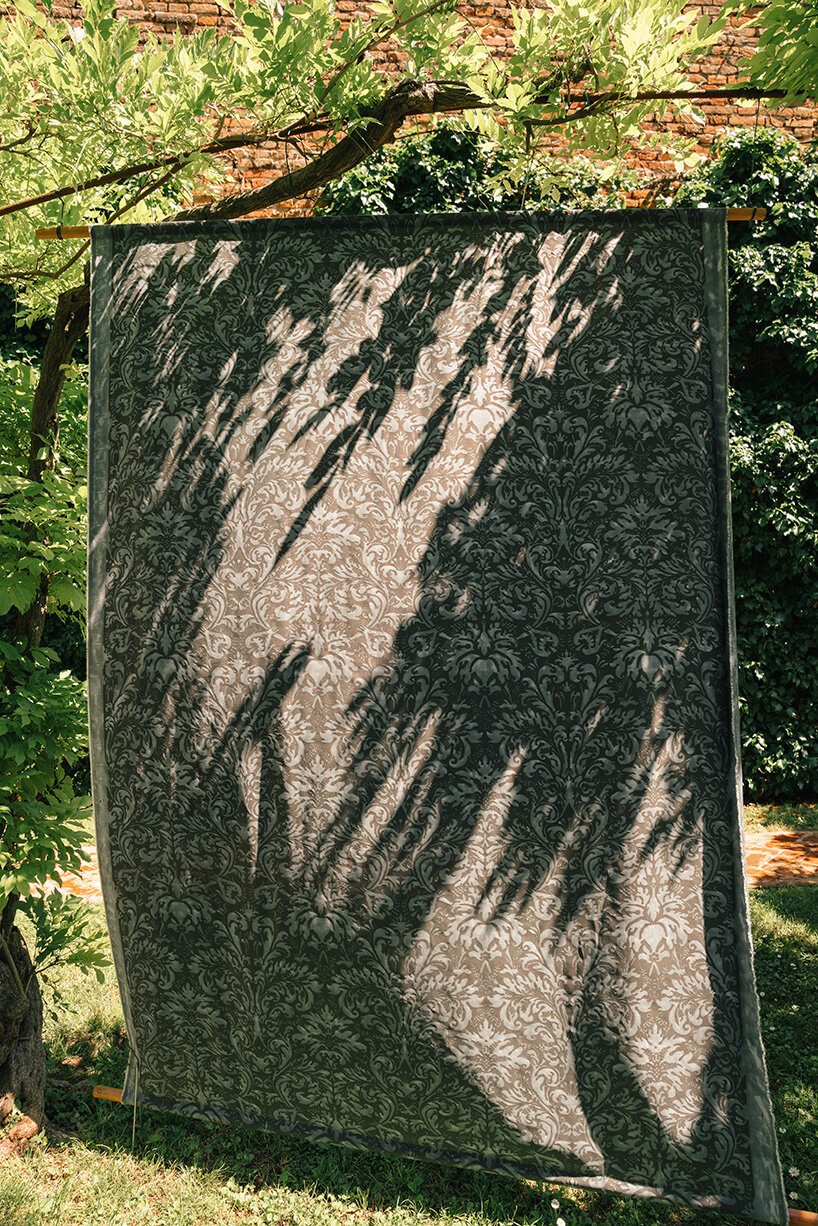 DB: SO, AS FAR AS WE UNDERSTAND, THE COLLECTION IS ABOUT HISTORIC DECOR…

MR: the patterns, for the most part, are archival. but the collection ended up really being about not being designed in venice. I had a trip booked for february 23 of last year, before the pandemic happened. then our world became smaller and smaller, until we were literally just confined to our homes. the design of this collection took on a new meaning. for me, it was about this longing to go to venice. I started visiting venice through photographs I’d taken here in the city throughout the years and through books and exhibitions that I had visited before, and just really tried to put myself in the mindset of venice and in the artistry of venice.

in march of last year, we wrote in our newsletter that we were going into a chrysalis phase, which is the cocoon of the caterpillar. it’s about this idea that we all built this protective shell, not to separate us from the world, but as something to allow us to grow and to become the best version of ourselves to then join the world. we wrote that we know we will emerge from this, and how we emerge from this is mostly up to us.

outside our window there was just this intense green of nature coming to life, and the birds and the squirrels and chipmunks and groundhogs and deer. it was remarkable how the earth was catching its breath. that ‘green’ started to represent such optimism and hope for me. nature wasn’t worried about COVID-19, they were having a field day. and like that, ‘green’ became the central part of the collection. we started building around it, and the selection of the patterns that we did really spoke to that longing for travel – so we picked morocco, spain, the mayan civilization, venice… and because it’s mariano fortuny’s 150th birthday it’s also something to honor him. the pomegranate motif which represents the idea of fertility and rebirth and growth. so that’s really what the collection is about for us. and the idea that there’s an artist here in this garden painting the wings of these butterflies with our patterns and colors and then just releasing that joy into the world. it is about what we do best and showing that there is still hope, there is still optimism, there is still beauty. the only thing we can do is to to reflect on it in a way that makes the world a more beautiful place. 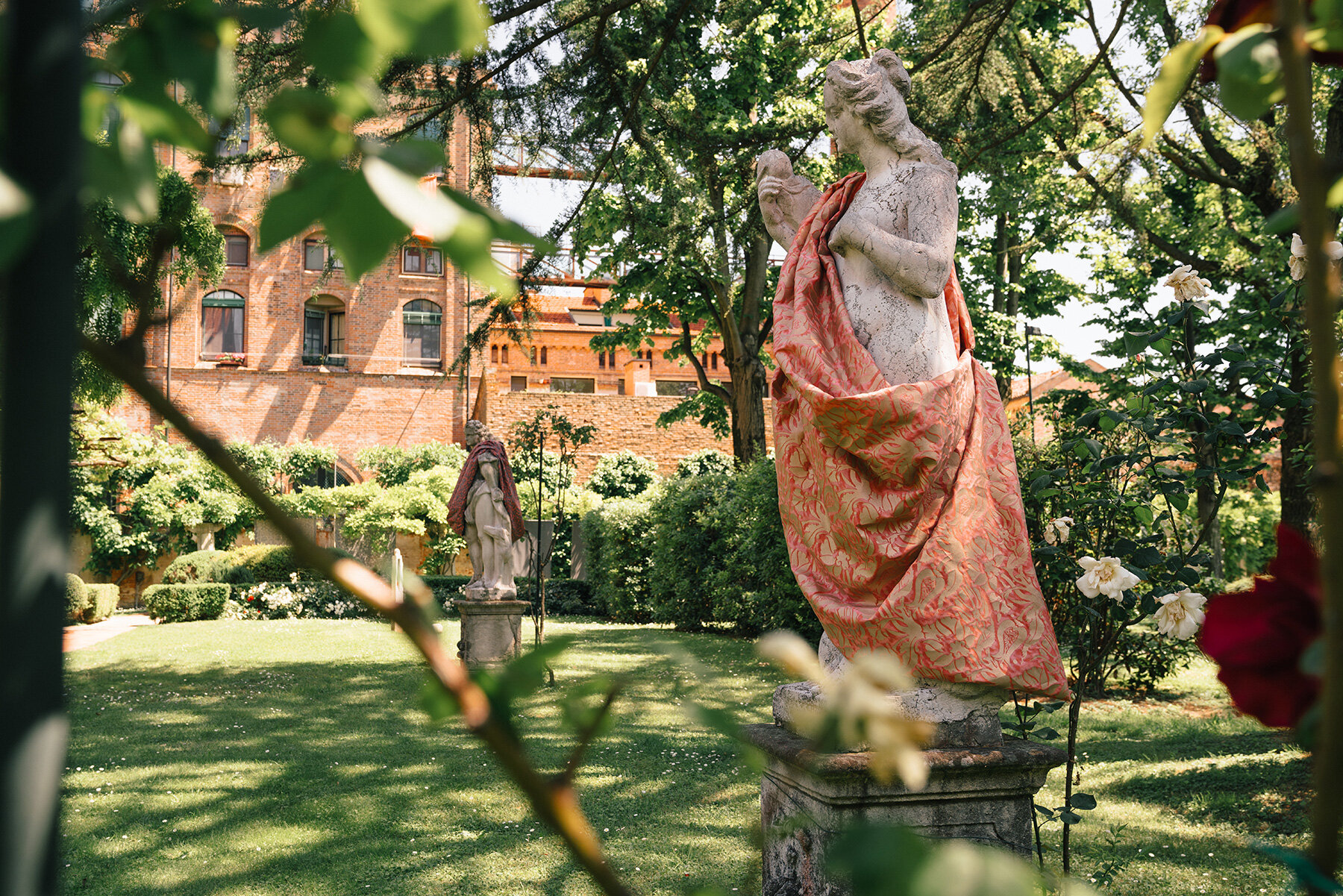 DB: ARE THESE LIMITED EDITIONS?

MR: they are, but we’ve gotten very good with being able to standardize what we do. if we need to reproduce something, we can come very close. every piece is unique, every piece does change. when it’s produced,  it reflects the temperature and the humidity, it reacts with the raw material, all of that comes into play. what we say is that when you purchase a fortuny fabric, you’re not just purchasing a fabric, you’re purchasing a moment in history. 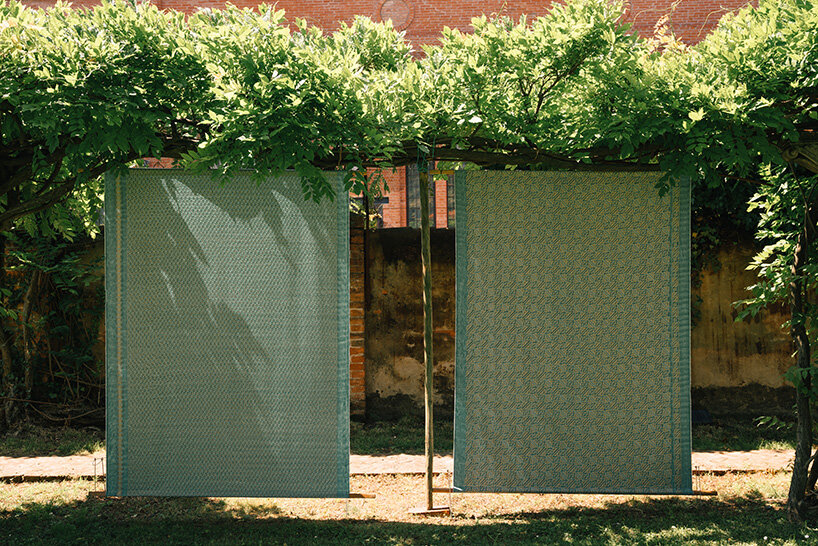 DB: AS FROM AN ARTISTIC POINT OF VIEW, WHAT ARE YOU DOING?

MR: I’m a musician… working on colors and working on songs. I’m working on my new album right now with my band. still very actively taking photos – so photographer as well. yes and I’m a writer… I think these passions all feed each other. 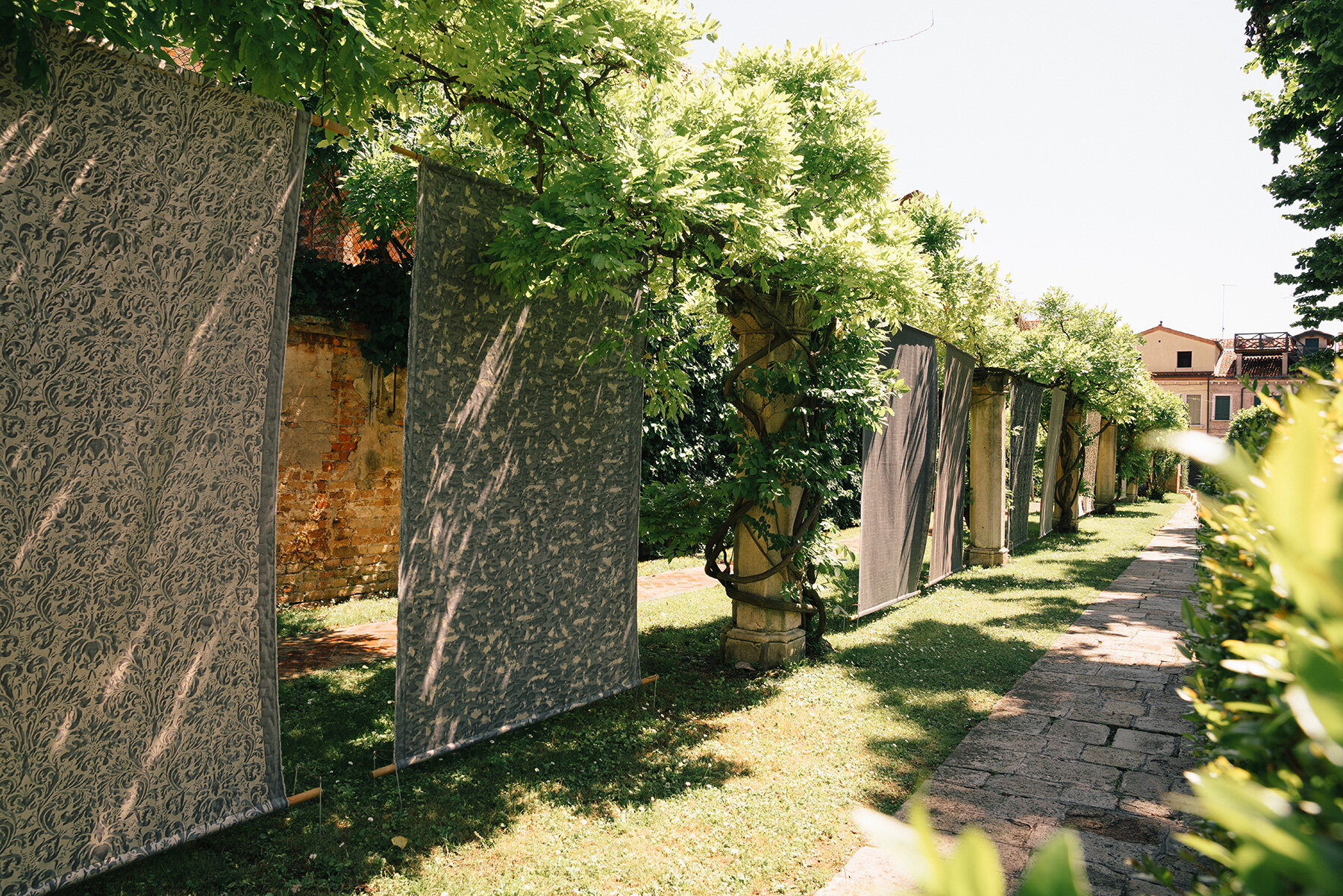 DB: ARE YOU INVOLVED WITH THE FORTUNY MUSEUM TOO?

MR: yes, we are involved with the museum and have a very good working relationship with them. for us it’s home. 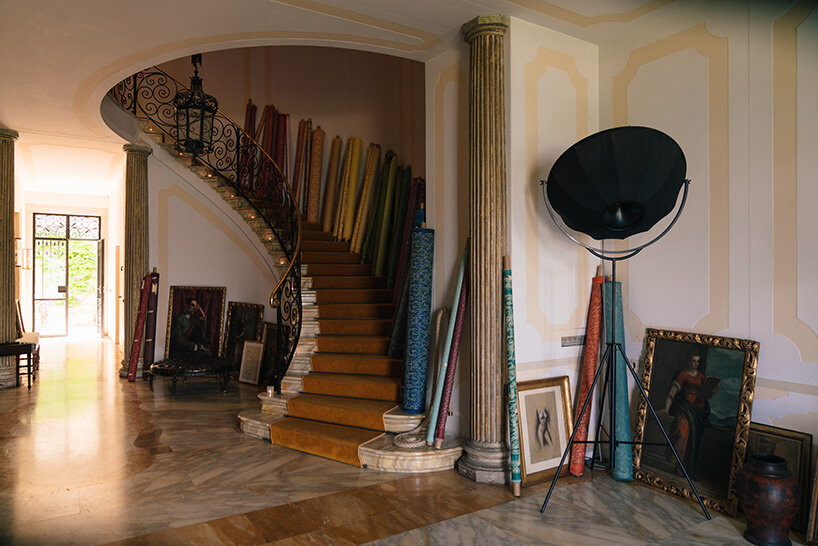 the entrance of fortuny’s atelier 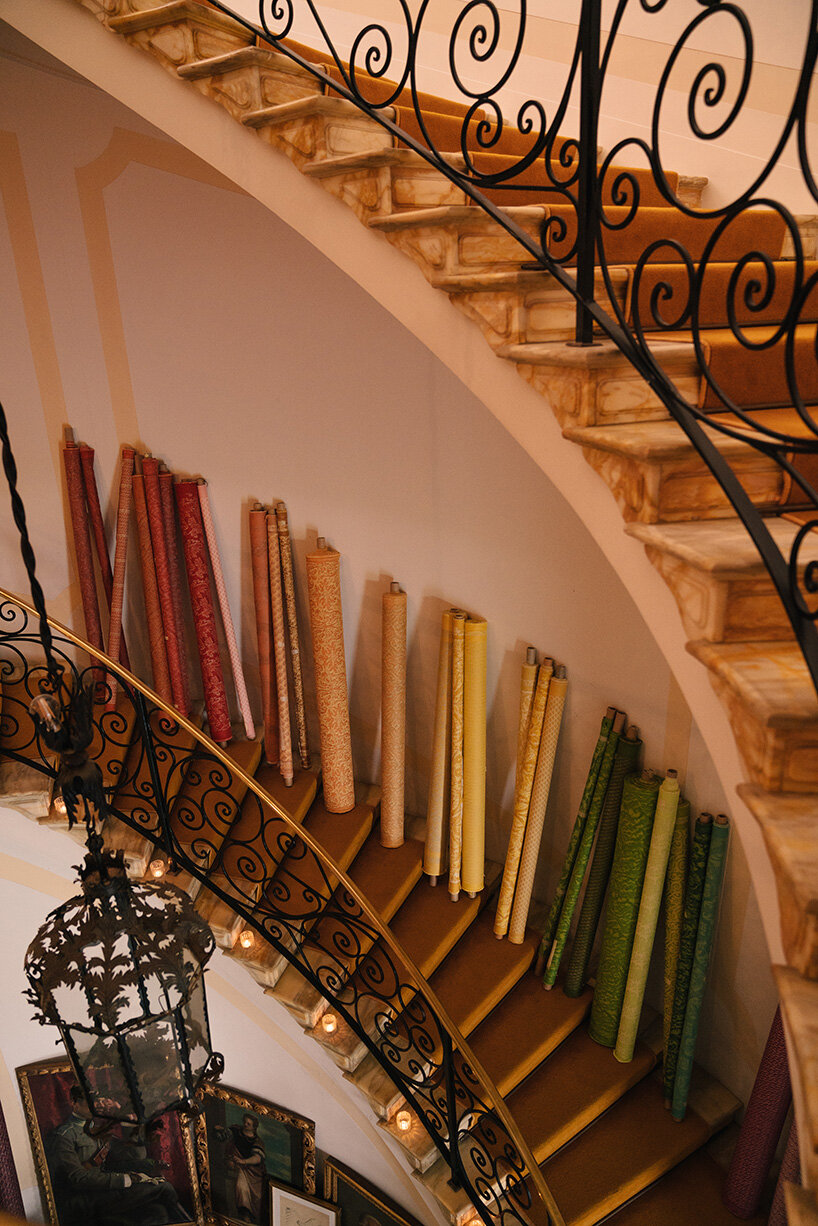 a display of fabrics on the stair to fortuny’s atelier 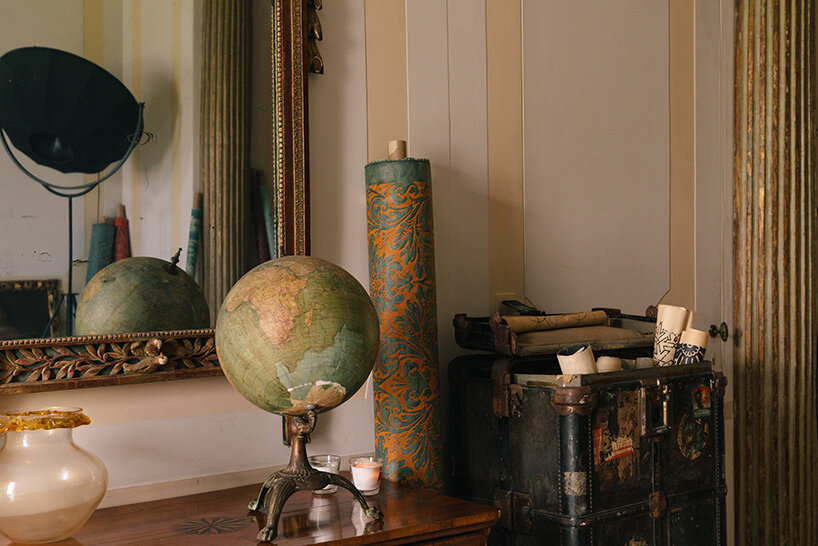 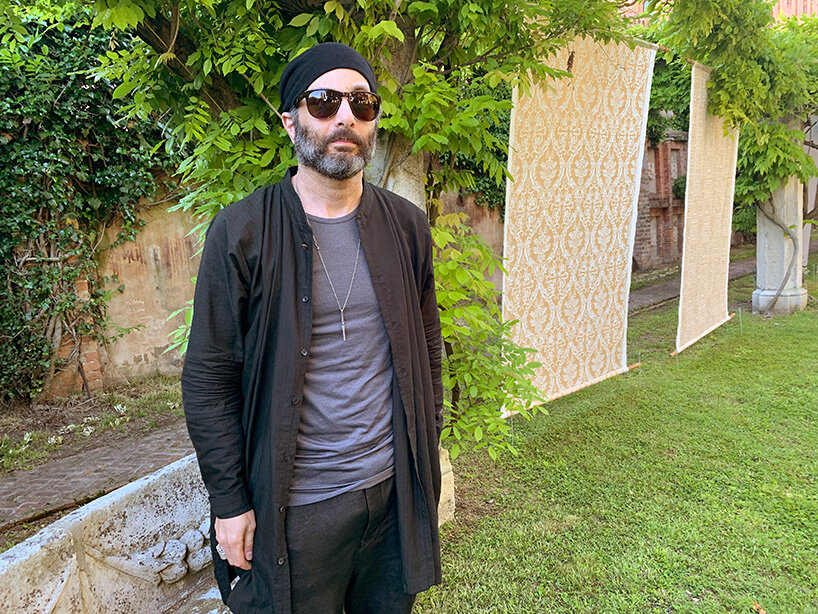 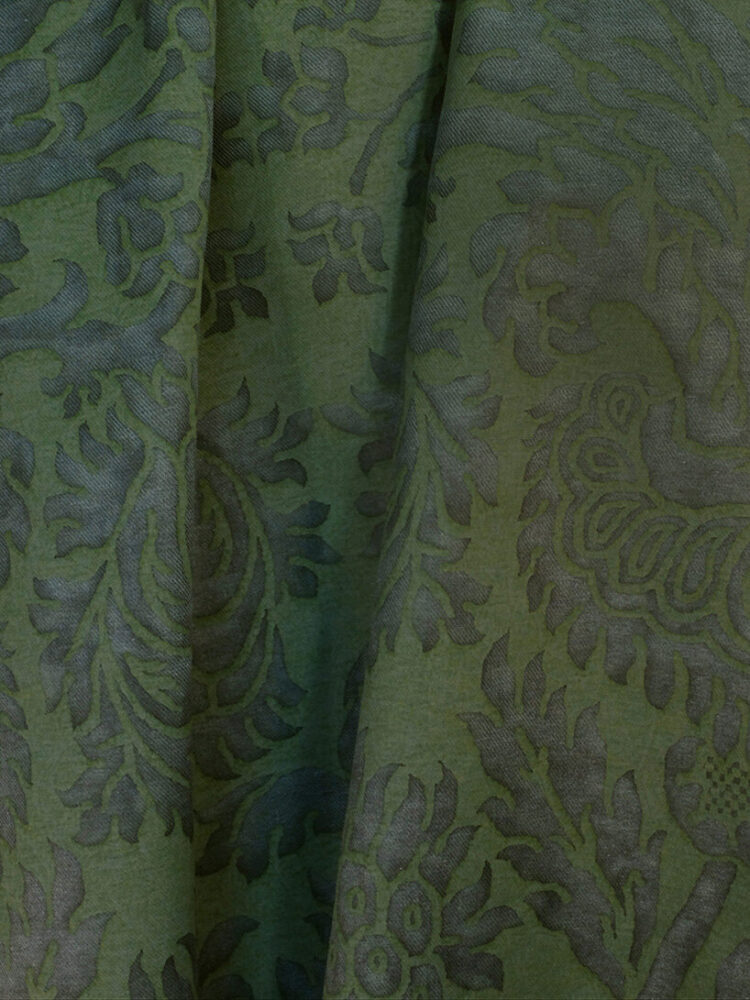 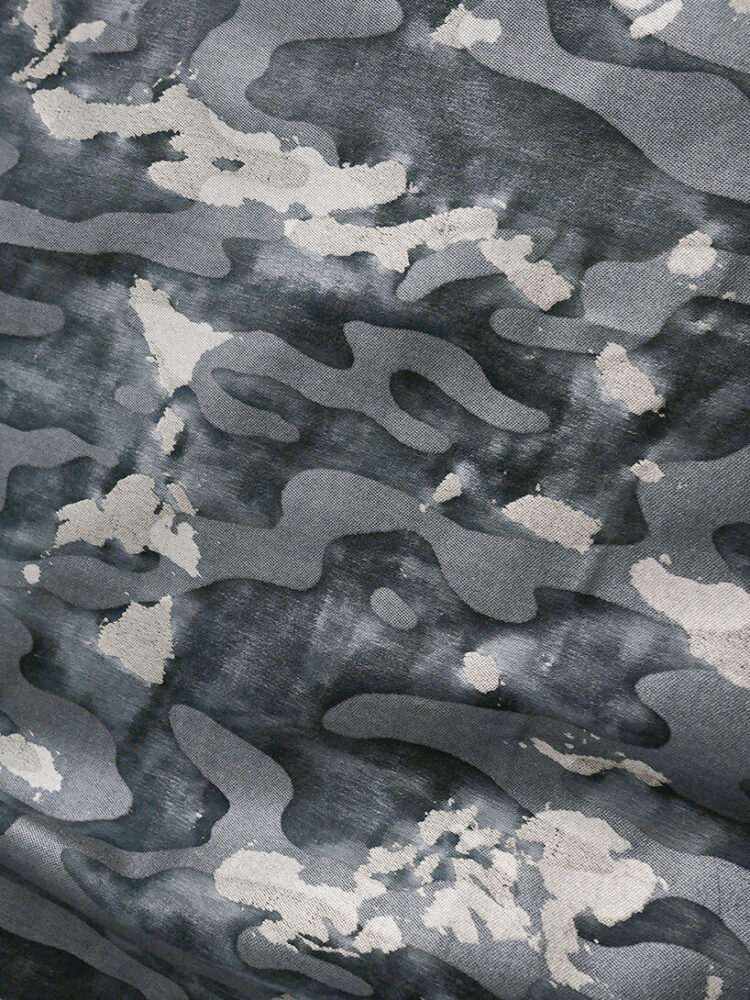 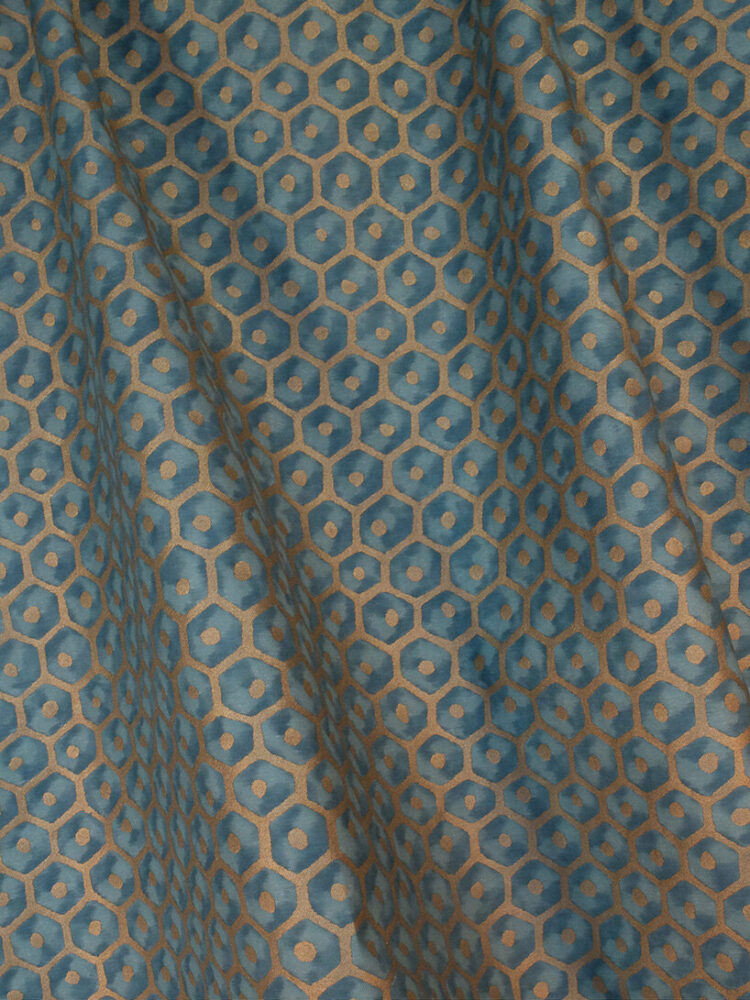 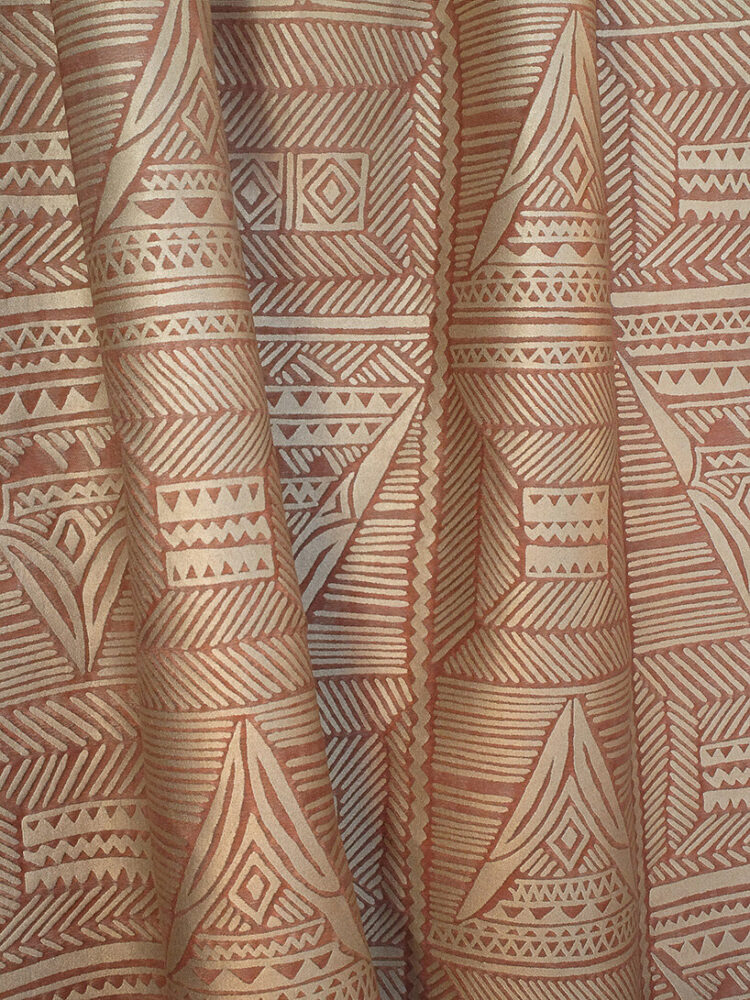 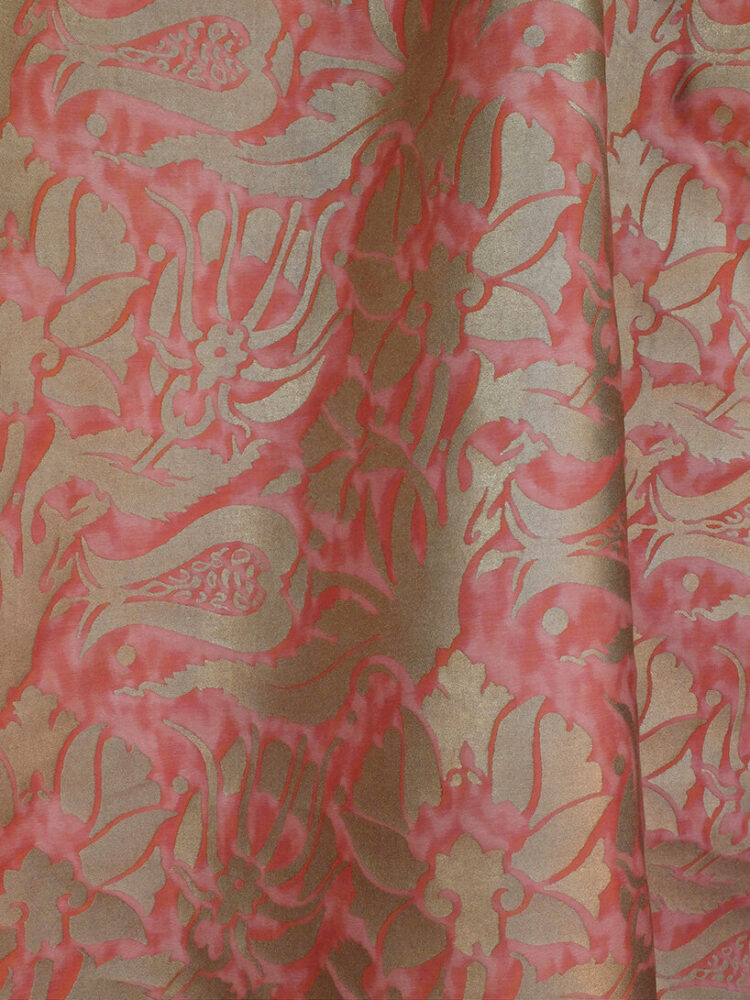 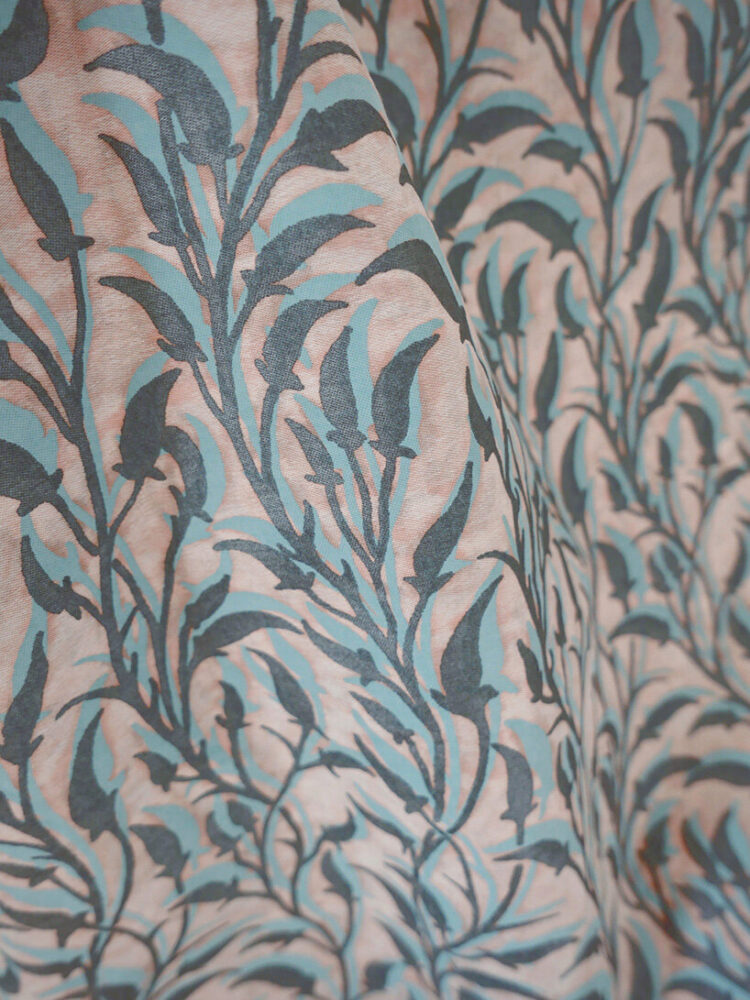 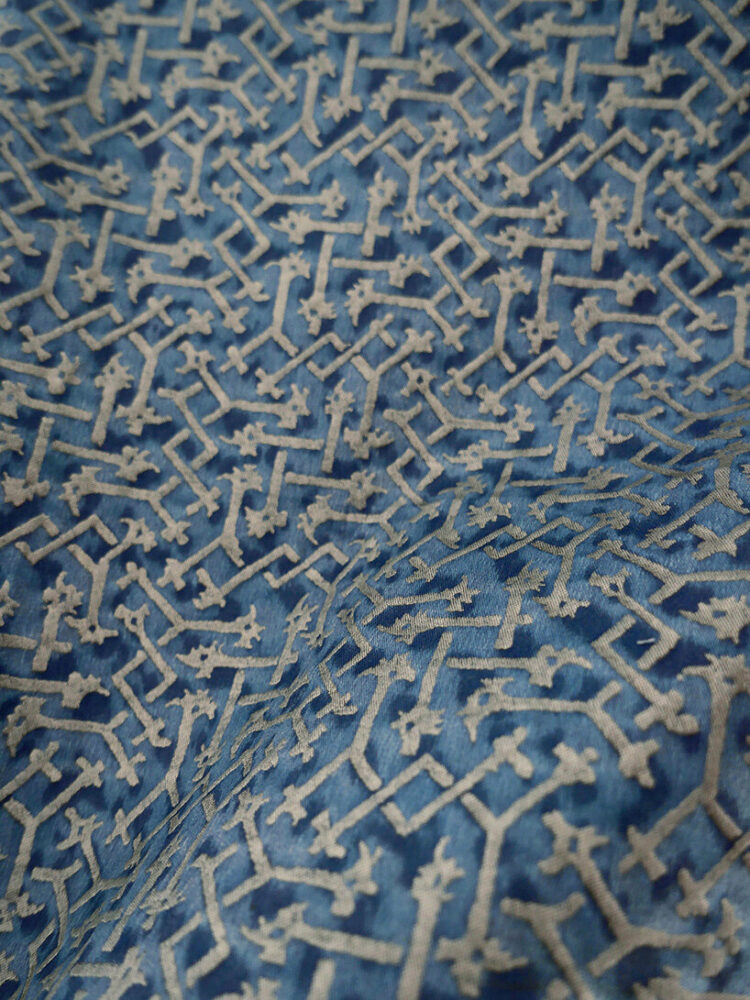 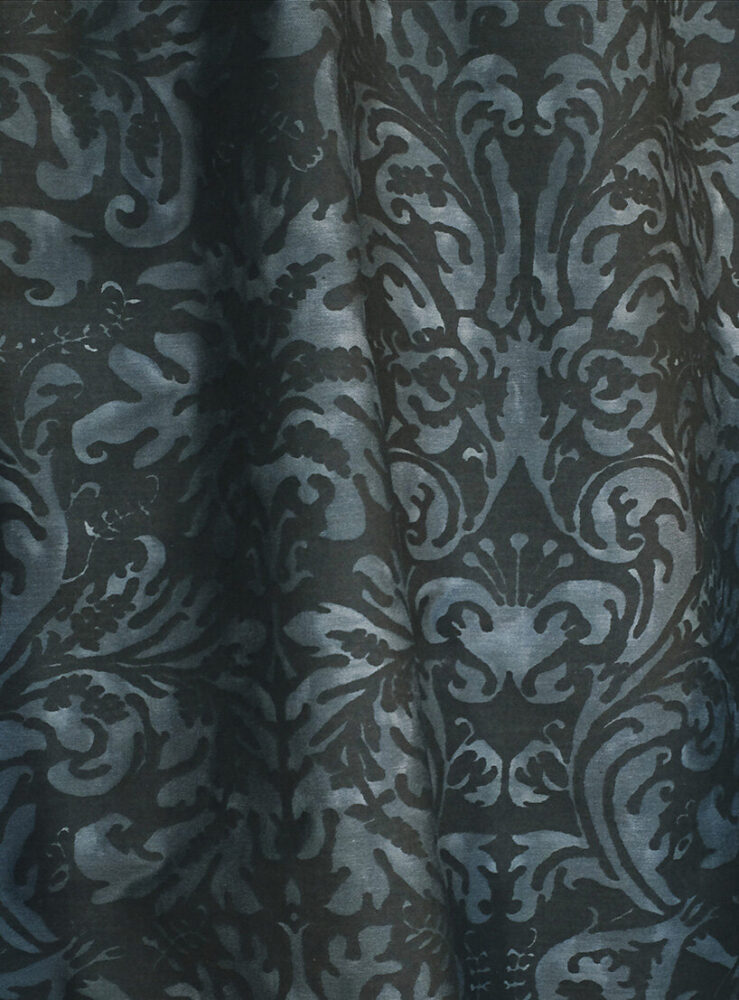 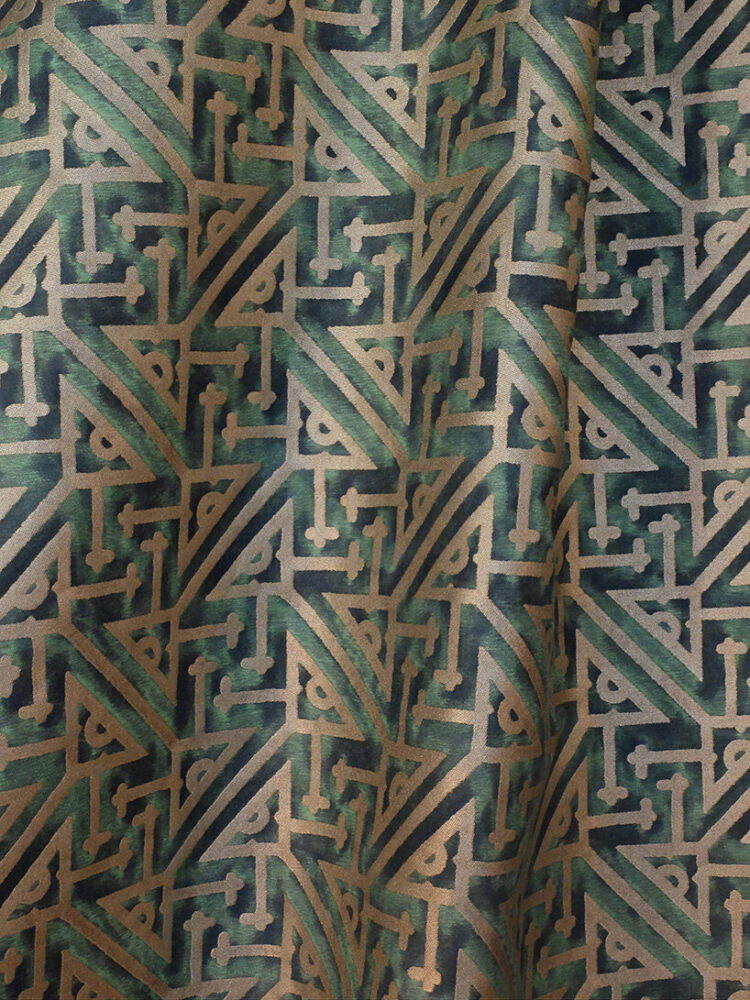 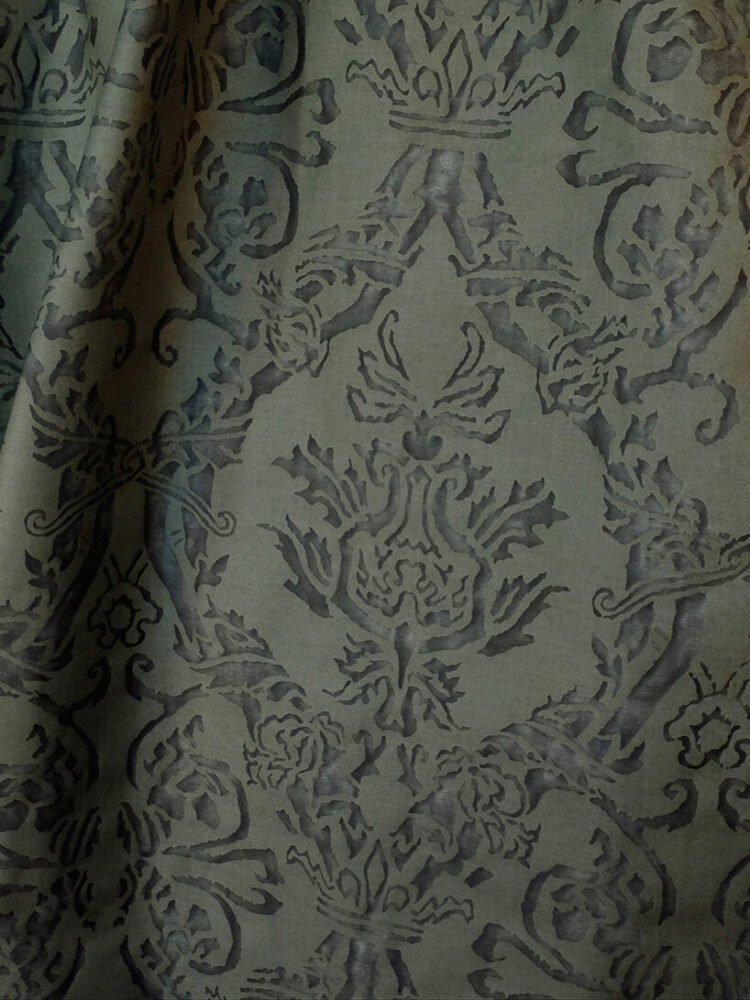