DESIGNART tokyo is an annual, 10-day cultural festival that sees the entire capital city transform into a museum. held every autumn, the city-wide happening brings together an international mix of art, interior design, fashion and technology across more than 100 locations and 11 different districts. 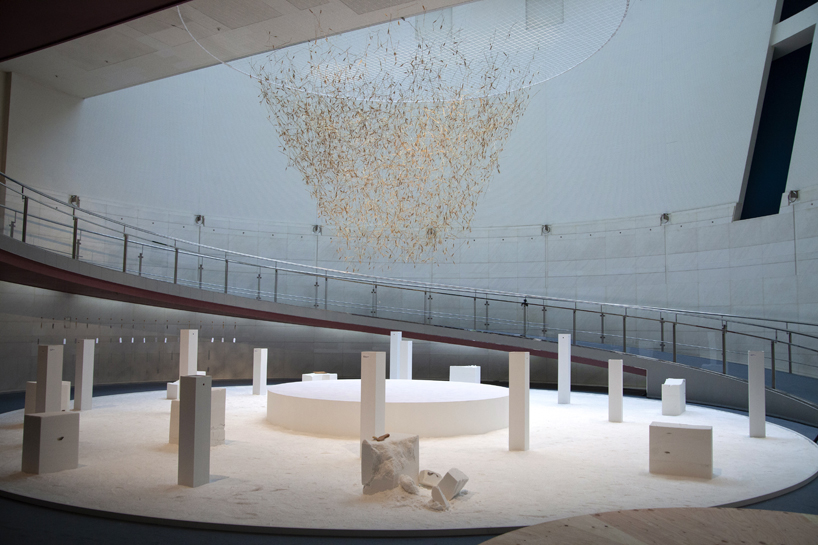 this year held from october 18 – 27, DESIGNART TOKYO 2019 presents a highlight exhibition that celebrates israel as its partner country, bringing its design principles to the japanese public. held at spiral — the multi-use cultural complex in aoyama that includes gallery space, restaurants, and shops — the exhibition ‘garden of eden’ leads visitors through a sequence of projects, which result from a local israeli perspective on nature, culture, technology and myth. 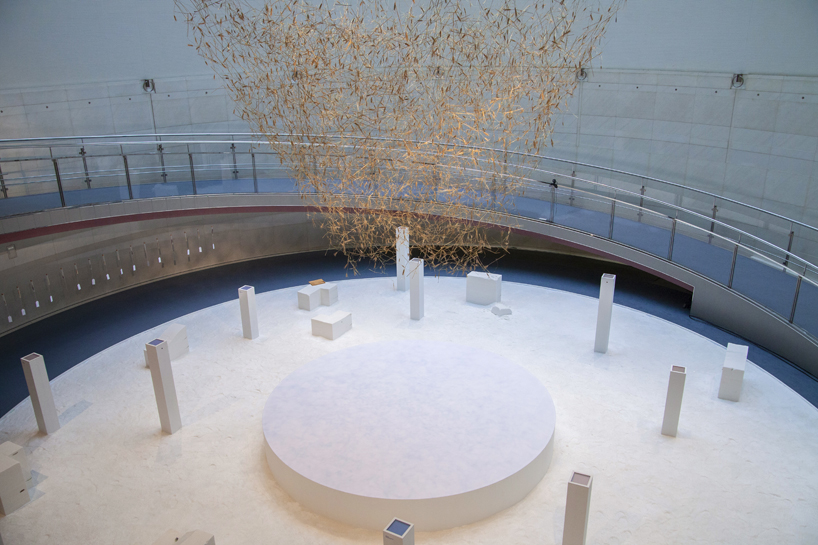 presented by jerusalem design week, ‘garden of eden’ features a range of work that offers a local perspective on resources, crafts, science, and history. the interplay between these four elements is a primal one, stemming from the origin of man. it is that primal myth –- the famous garden of eden — where design begins. ‘our space design aims to connect the israeli design by untangling the line that connects it,’ say the exhibition’s designers, natalia sanz laviña and dr. takeshi yamamura from YSLA architects, and the takeshi yamamura architecture lab at waseda university. ‘the space offers visitors the opportunity to enjoy the art pieces from a different perspective, in a different time with a different knowledge.’ 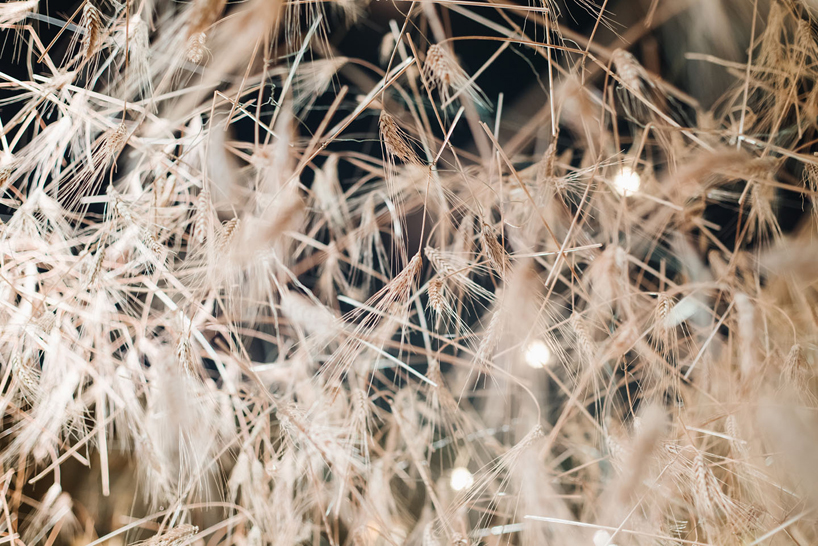 goren, 2018 | guy mishaly & nati tunkelrot | image courtesy of jerusalem design week
the installation ‘goren’, made in collaboration with the weizmann institute and the volcani center in israel, relates to wheat varieties –- all on the brink of extinction –- having been replaced throughout the 20th century by a varieties cultivated for high yield, and uniformity. ‘goren’ aims to provide a glimpse into the conservation efforts underway to preserve this valuable resource.

visitors journeys ends in the garden, where two local histories of israel’s resources meet: the presence of the salt from the dead sea; and wheat, a generator of the agricultural revolution and modern life. at this meeting point — between the myths of life and death — architectural interpretations of local flowers are hidden within secret private gardens, which, symbolically, can only be imagined, but are barred from entry. 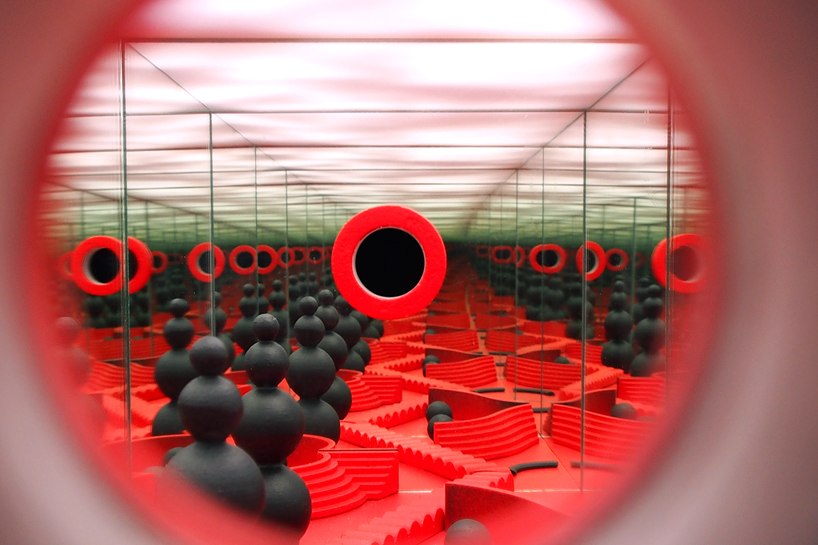 little private gardens, 2019 | idan sidi & gal sharir | image courtesy of jerusalem design week
twelve white columns, which do not reveal their contents, form a new kind of garden. each of them holds a story of a local israeli flower. their entrance gate allows only one person to peek, who becomes the sole ‘visitor’ in the garden, while at the same time remains outside of it. 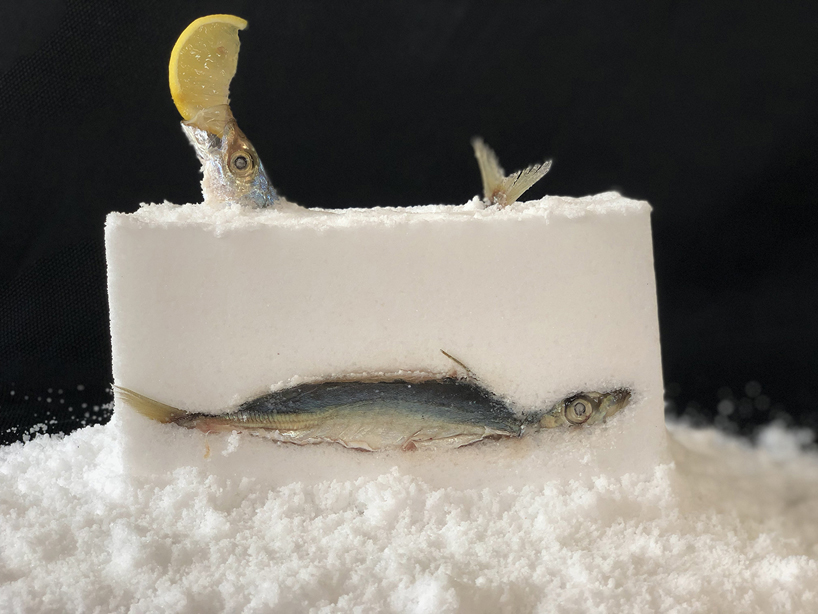 salt repast, 2018 | michal evyatar & carmel bar | image courtesy of jerusalem design week
one of the most common techniques used in israel’s culinary history was the salting preservation technique. inspired by it, an actual archaeological site is created, made of 5 tons of salt. in its walls, local food is buried, cured during the exhibition. the crowd is welcome to wander through a gleaming white salt site, that preserves local cultures and traditions. 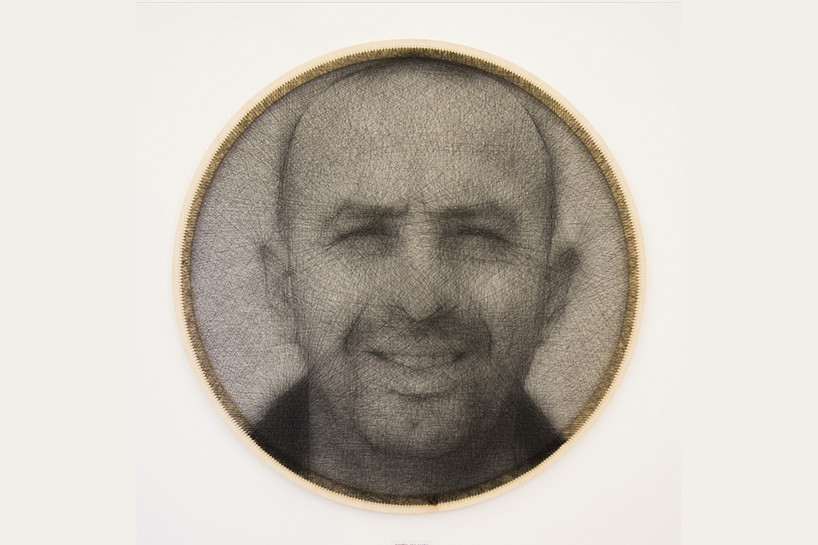 the common thread — garden keepers, 2019 | amir zobel & itay blumenthal | image courtesy of jerusalem design week
the common thread project, the result of a year-long research conducted by algorithm developer itay blumenthal and designer amir zobel, shines a light on mostly unseen faces of those in charge of maintaining the seemingly uninterrupted nature of unique gardens in jerusalem and in japan. using a hacked CNC machine and a uniquely developed algorithm, one line of thread is weaved around 471 nails embedded in a circular wooden frame. 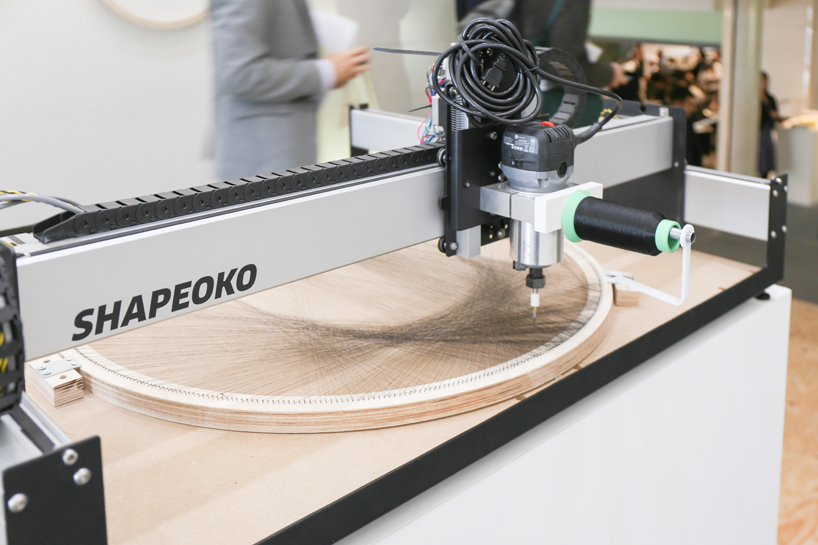 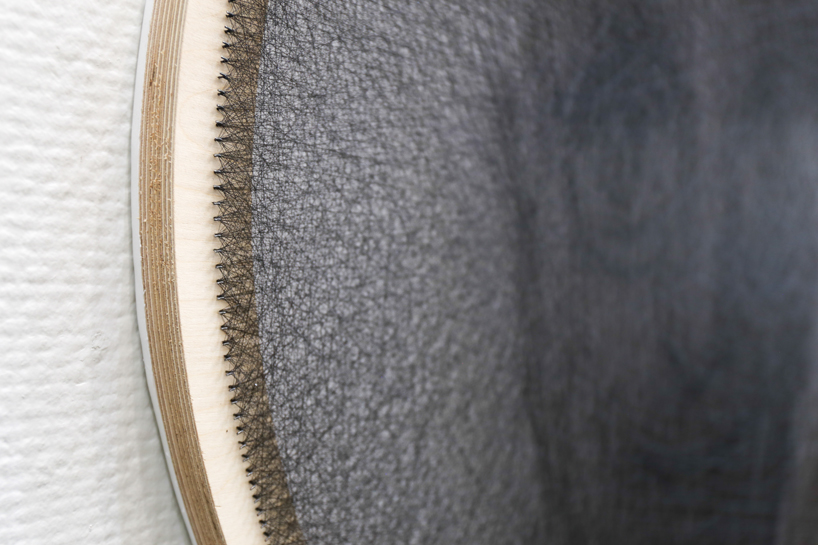 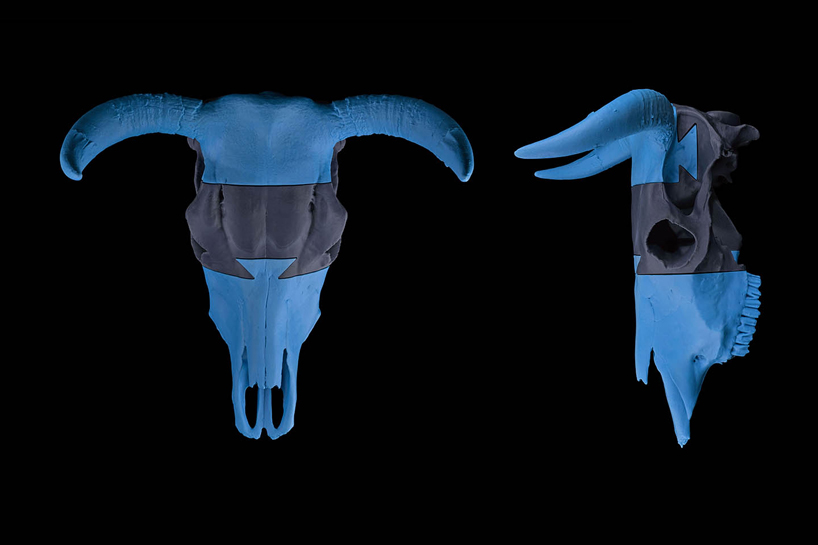 beast of the anthropocene, 2017 | dov ganchrow | image courtesy of jerusalem design week
a series of manipulated cow skull — some bone, others 3D-printed — play on what the skulls propose as a readymades. the 3D-printed skulls are sectioned into threes along with a dovetail connector in a way that allows the reassembly of different cow skull parts into various wholes. made in collaboration with stratasys. 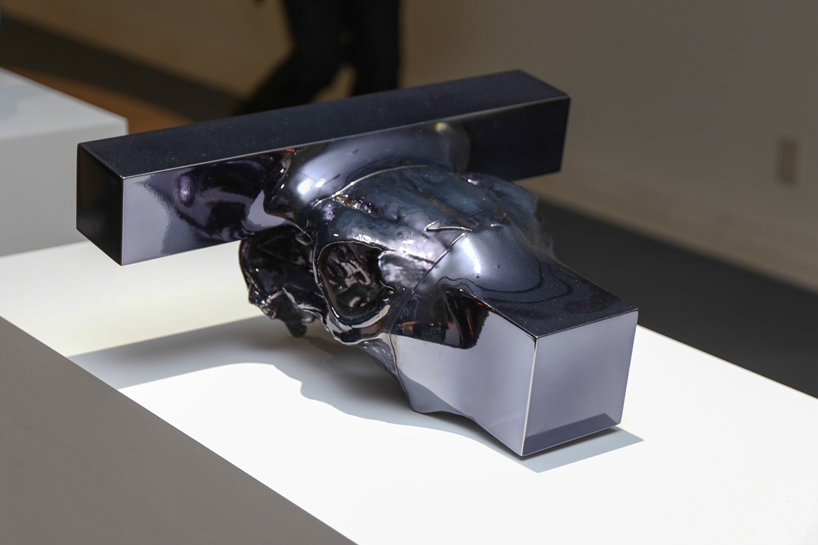 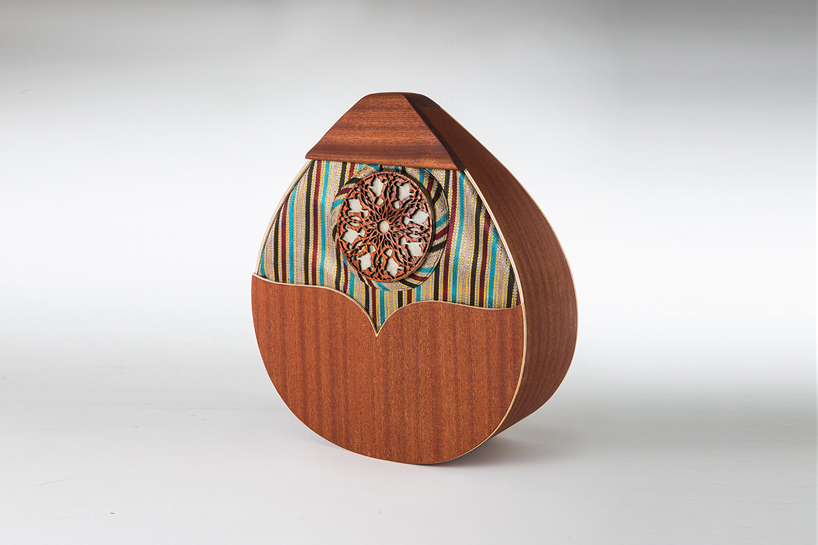 the matchmaker — eat culture, 2019 | shady francis majlaton, daniel nahmias & traditional musical instrument maker aref sayed
the project is a collection of bags made of wooden arab musical instruments and syrian silk fabrics, that was designed to take the shape of nuts. this work was created as part of ‘the matchmaker’ project, which pairs contemporary designers and traditional craftspeople. 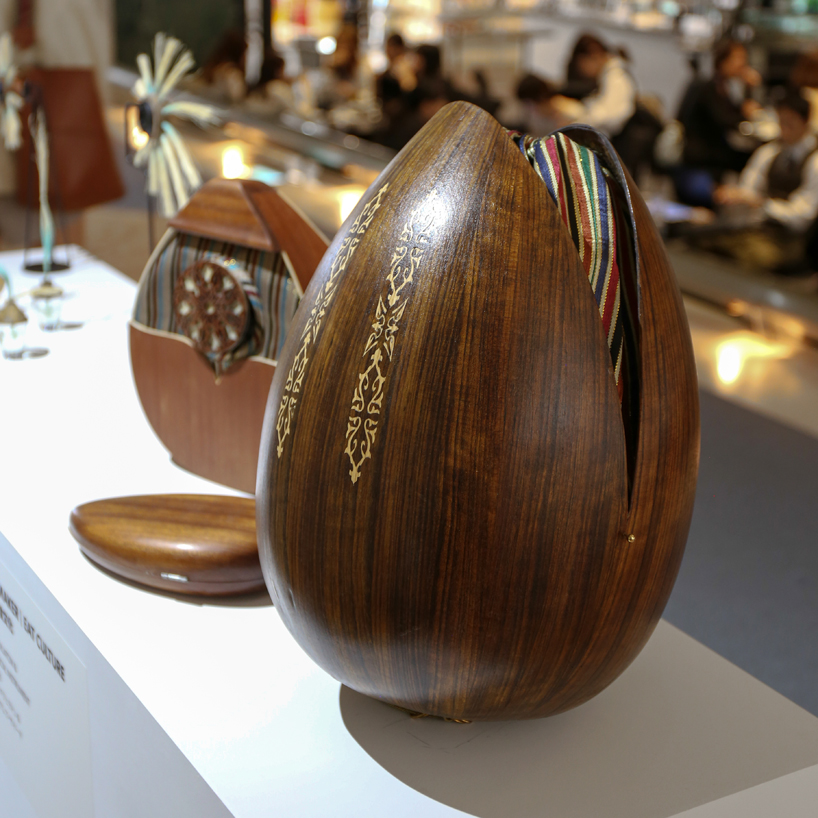 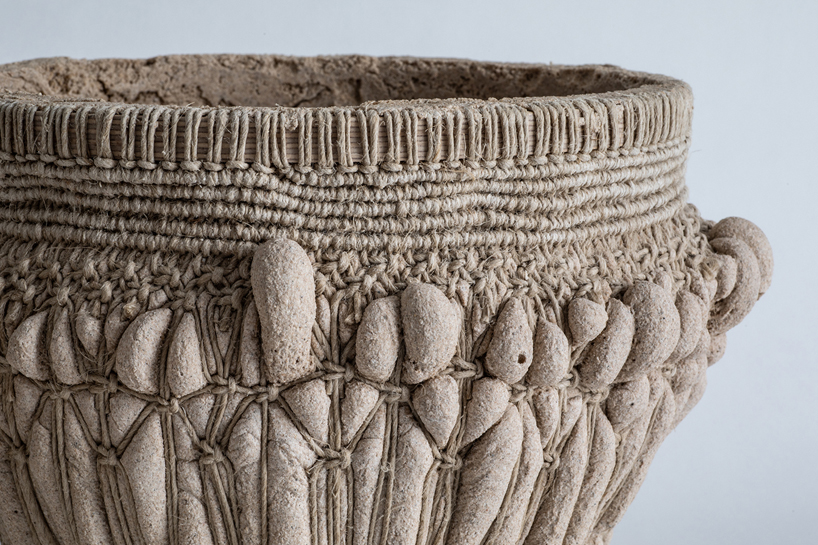 terra cotta #1, 2011 | talia mukmel | image courtesy of jerusalem design week
the pieces are made of sand and flour, and baked in a domestic oven. their creation was motivated by the desire to explore a simpler world, which is devoid of the numerous possibilities offered by contemporary technology. mukmel was inspired by communities in desert climates, which make use of available raw materials to produce everyday objects. 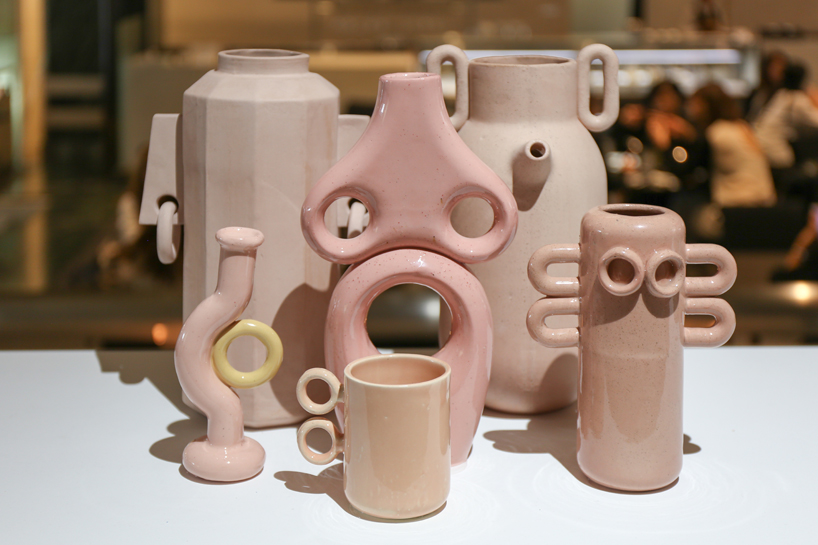 untitled, 2019 | avi ben shoshan | image © designboom
the aesthetics of the vessels are inspired by the history and culture of the mediterranean design philosophy, looking at nature as material, color and shape. they are produced in a traditional artisan workshop and all are hand made in tel aviv. 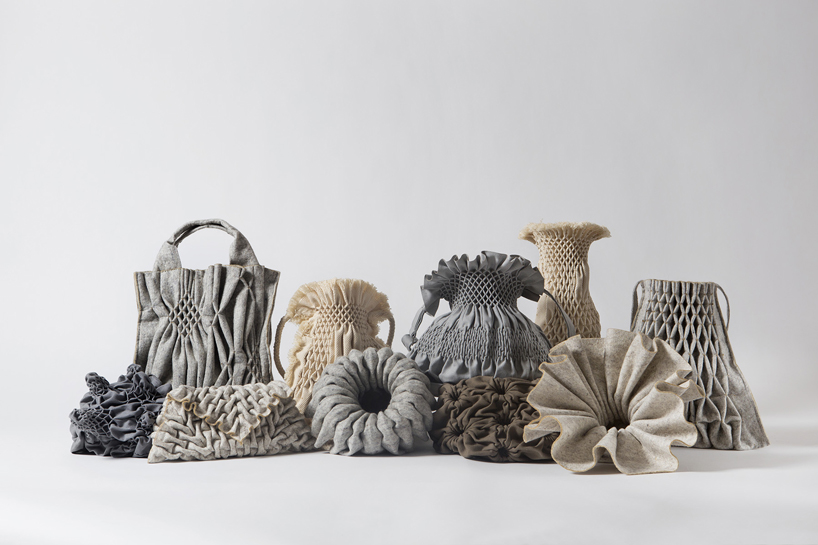 crafted technology, 2011 | tamara efrat, moran mizrahi & dr. amit zoran | image courtesy of jerusalem design week
a collaboration between the bezalel academy of art and design and the school of computer science at the hebrew university — crafted technology refers to the history of traditional smocking embroidery, analyzing its constructive, morphological and textural characteristics. 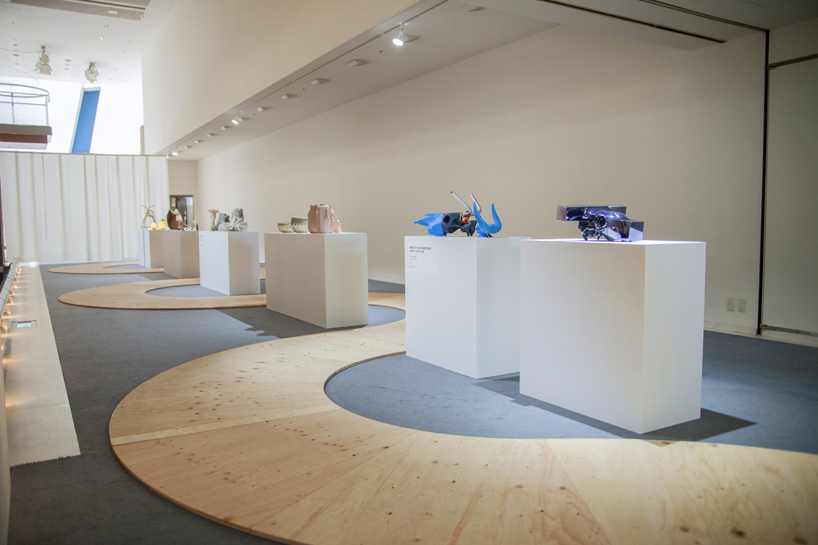 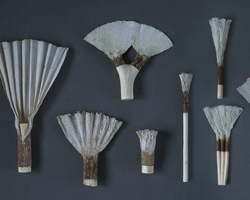 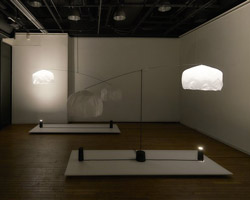 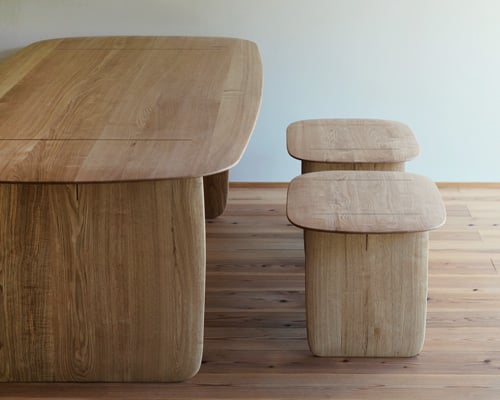