‘oggetti disobbedienti’ takes its name from the definition giulio iacchetti gives to the pieces he has selected himself for the exhibition. on show at the triennale design museum is what the designer likes to call manifesto-like items, ‘disobedient’, as he sees them as paradigmatic and emblematic of his overall career. ranging in design from chairs, knives, taps and even biscuits, through his designs iacchetti explores the need to expand and strengthen the democratisation of design, through a dialectic relation between culture and marketing. iacchetti’s approach is conceptual, in which he works on ideas rather than objects. he captures the spirit of the time and analyses its contradictions, creating objects that generate meaning and suggest deviations, short circuits, and contrasts. his ‘disobedient’ objects are often a commentary on or question of the state of the world today.

odnom is derived from the reflected letters of the word ‘world’ (mondo in italian). in renouncing the geographical conventions by which north usually dominates south, the odnom globe restores visual equity and appropriate importance to the most hidden zones of the earth. the base of the globe consists of an inclined mirror, with geographical terms for the southern hemisphere written in reverse, so as to be perfectly legible once reflected by the mirror. 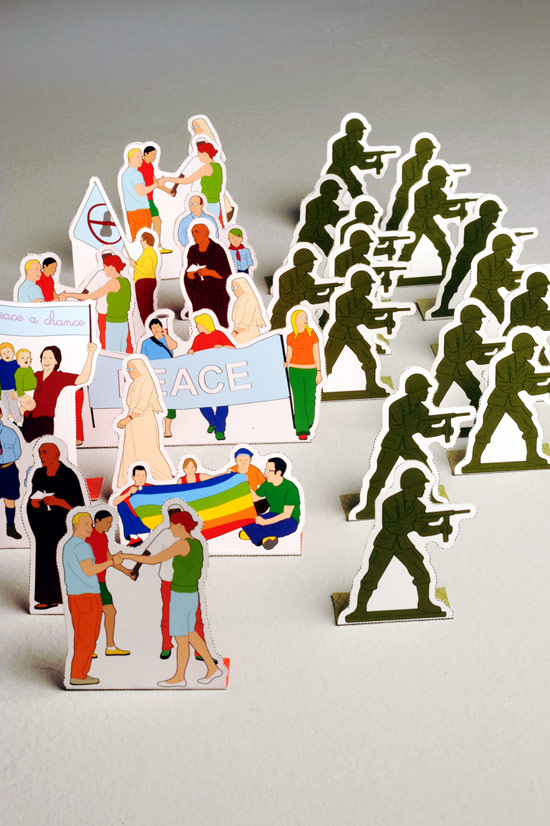 war and peace: half of the magazine’s pages are dedicated to images of little soldiers (all alike, all in order and all the same color), and half show a series of profiles of a hypothetical peace march: youth with banners, families, nuns, buddhist monks, all different, colored, disorderly…the game consists of cutting out the figures along their edges and folding the little tab near the feet. the children and adults a like are free to choose whether to make up an army or a festive peace march, or maybe both. 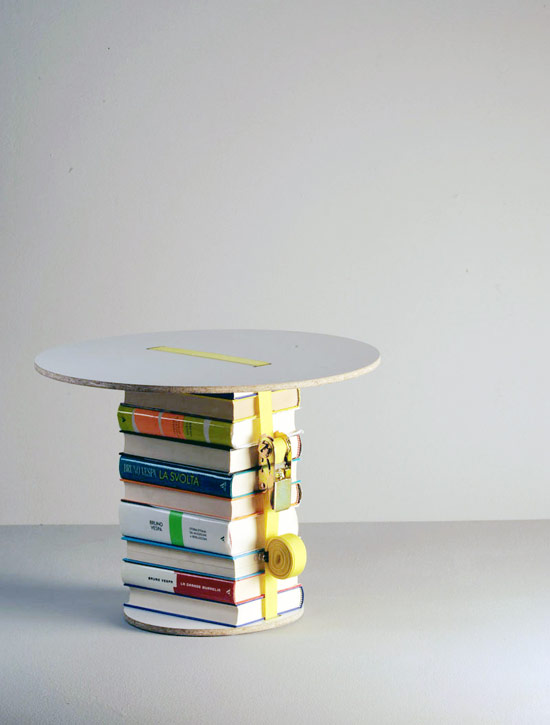 the ‘vespa table’ was a readymade project for the ‘madeathome’ exhibition at spazio rossana orlandi, curated by atcasa/corriere della sera.it. the side table is realized entirely out of recycled materials. the table’s surface and base are cut from old cupboard doors found on the road, while the support stand is made up of a pile of books by bruno vespa, bound together by a nylon belt. 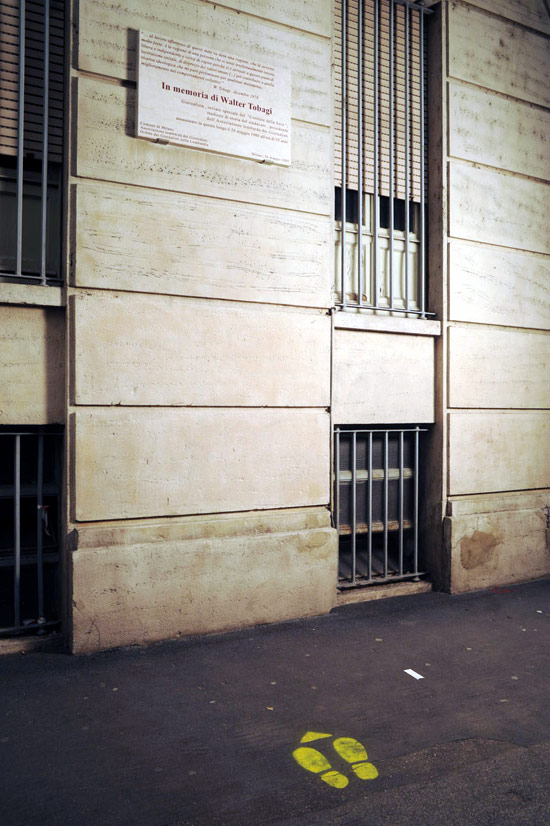 created as an alternative street signal marking, showcasing the plaques commemorating fallen partisans or other places that have marked the life of the city. the outlines of two feet and an arrow are marked on the asphalt using a stencil. the signal is meant to draw the attention and curiosity of passersby, inviting them to raise their heads and take a look at the spot which is being marked. 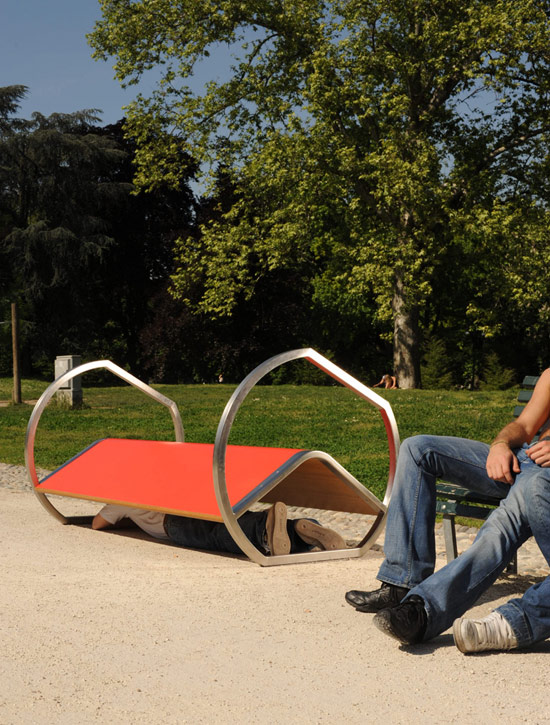 flexible bench is meant to act urban seating. the seat/back element can rotate, turning the bench into a shelter, a place where one may sleep for the night, or act as a roof to protect oneself from the summer heat(or bad weather). the project is meant to remind us of the inhospitality of cities, dedicated to the homeless, but is not intended to offer solutions to social problems. 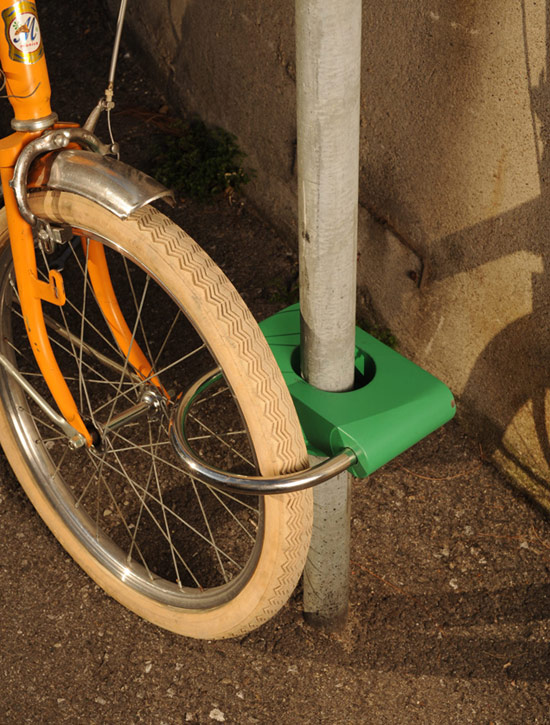 realized with alessandro gnocchi, luca spagnolo and the turin community of cyclists, as part of the exhibition ‘torino geodesign’ curated by stefano boeri, stefano mirti and lucia tozzi (for torino world design capital 2008). ‘luk’ promotes the use of he bicycle in the city by rationalizing the use of antitheft devices. the system has the form of a large padlock fixed onto numerous poles in the city: the intention is to free cyclists from the weight of chains and locks, both physically and metaphorically. only key and lock are personal and easily transportable. 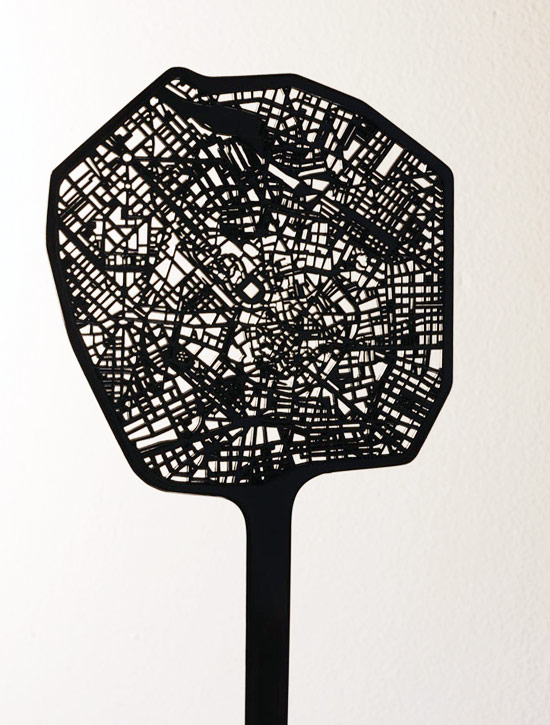 ‘bye bye fly’ was originally conceived as an unconventional souvenir for milan. iacchetti was inspired by the mosquitos and flies which infest milan during the summer evenings. that’s how the design was born for a flyswatter that was reproduced to look like the street layout of milan. normal flyswatters have a net-like griding which reminded iacchetti of the plans of cities. however, milan is made up more of rings and radial streets.‘I bet the flies, as long as they have to die, would prefer being killed on the spot on via montenapoleone! (exclusive street in milan)‘ – GI 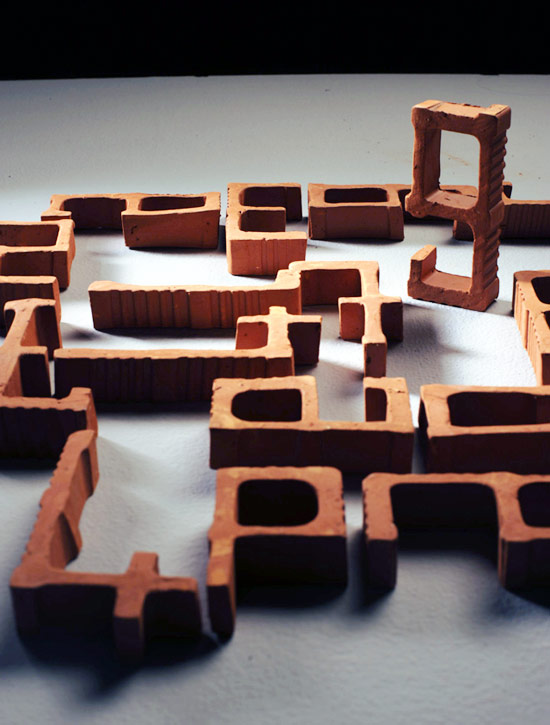 ‘clay font’ was the result of an open project in which designers and design schools were to promote the use of six material characteristics: water, clay, cotton, iron, stone and talc. inside the carena kilns, where MUNLAB operates, the typic ‘air-bricks’ are produced, the piedmont half-fill brick used for making partitioning walls and for plugging. the program calls for producing the three dimensional numbers and letters of the alphabet, out of clay, by making simple cuts and beveling, to be operating on transverse sections of the raw brick, without any further modification to the structure of the handiwork. clayfont can be downloaded in digital forma from: www.giulioiacchetti.com 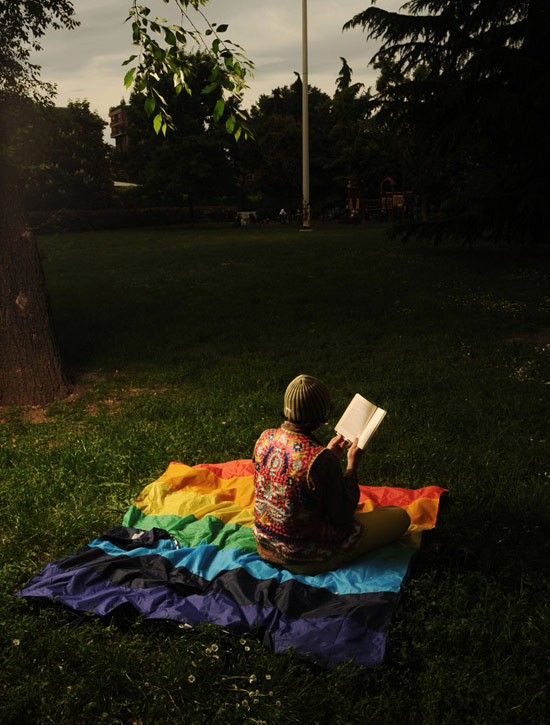 ‘an object in fabric, urban, striped’. all one needs to do is raise their eyes and glance at many windows of the city decked out with the peace banner. passing from the vertical to the horizontal is quickly done: a colored flag that becomes a cloth – or a cloth that becomes a flag? spread it out in the meadow or on the beach or keep it in the car or motorcycle trunk. equipped with a pocket and four tips at the corners for fixing to the ground, the cloth allows you to always have your own personal microcosm at hand, while transmitting peace loving signals. 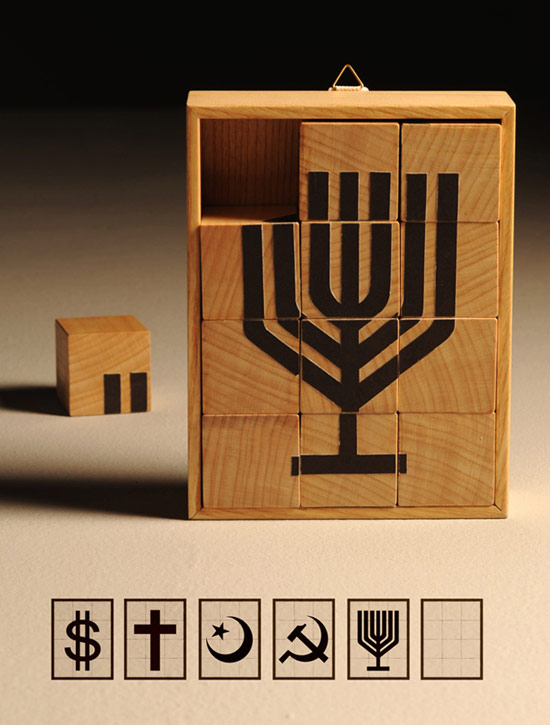 this game is an inflection of a classical furnishing accent for the wall. by varying the positions of the cubes, it is possible to obtain seven religious or political symbols. the twelve blank faces correspond to atheism and a haphazard combination corresponding to a state of spiritual confusion. ‘pantheon game’ offers the possibility of containing many within a single object, making them equal within the context of a play of images constantly undergoing a change. 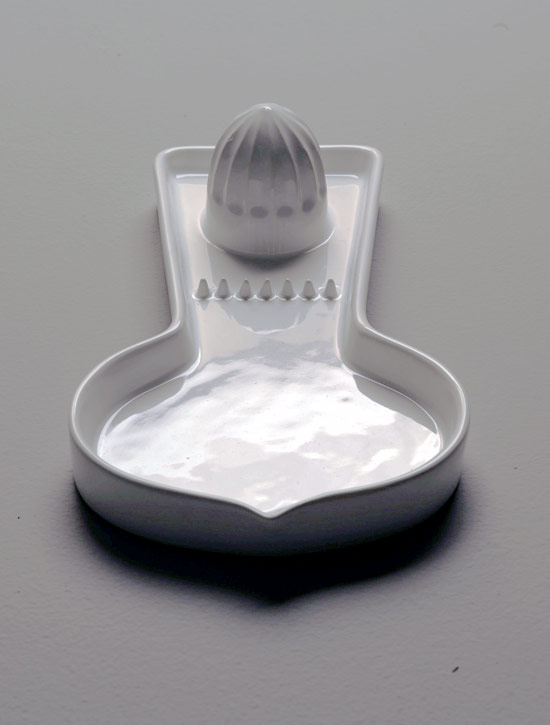 a stylized reproduction in miniature of st. peter’s square. the basilica’s cupola becomes the juicer and the square before it becomes the recipient for the squeezed juice. the project of st. peter squeezer inflects and associates the term ‘squeezing’ with the voluntary tax contribution directed toward the catholic church, for which st. peter’s basilica in rome is the symbol. 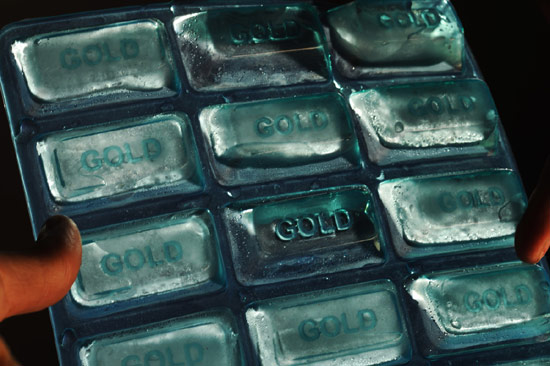 original name of the project: H20ro, designed for the exhibition ‘acqua’, opos 2003. the project arises from the invitation to conceive concrete solutions for introducing greater consciousness into the use of water in our daily lives. here water, in the form of icecubes, is presented as being the equivalent of gold. 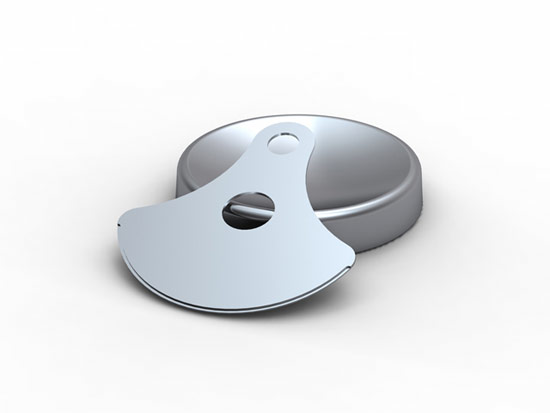 a chopping board for bread, the device is 4cm in diameter and is meant to hang around your neck like a jewel. a micro-cleaver, for dividing crumbs of bread equitable. the pollicini (‘tom thumb’) chopping board for crumbs is meant to be provocative and totally useless. it is meant to push us to reflect on the irony of rich resources and their unjust distribution throughout the world. 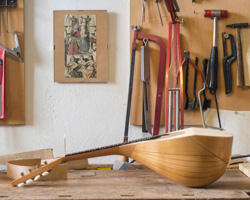 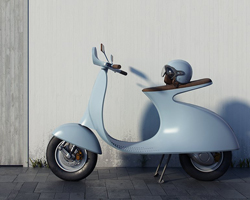 May 09, 2021
unfolding the art of pleating: history + techniques that have fascinated the world of fashion
human touch, tradition, experience and entrusted knowledge is still very much at the heart of this painstaking and time-honored craft.
design
458 shares
connections: 78