since 1816, japanese gyokusendo has been producing hand-hammered copper ware in tsubame city (niigata prefecture). during tokyo designers week, the company presents its historic collection and contemporary pieces by ken okuyama (former automobile designer of pininfarina) in the department store isetan miitsukoshi in ginza. 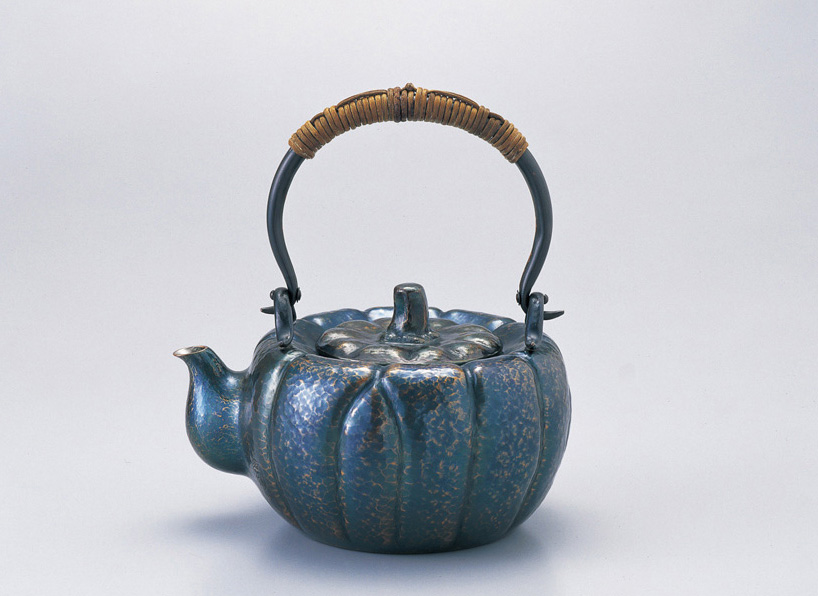 ‘tsuiki’ is the craftsmanship and the art of metal manufacturing technology and methodology of hammering metal crafts in japan. the company has as been proudly maintaining its history and craft tradition, mr. tamagawa motoyuki directs gyokusendo in the family’s seventh generation. blessed with both raw materials and tools since long ago, the metalsmithing techniques that have been developed in niigata are now known nationwide. 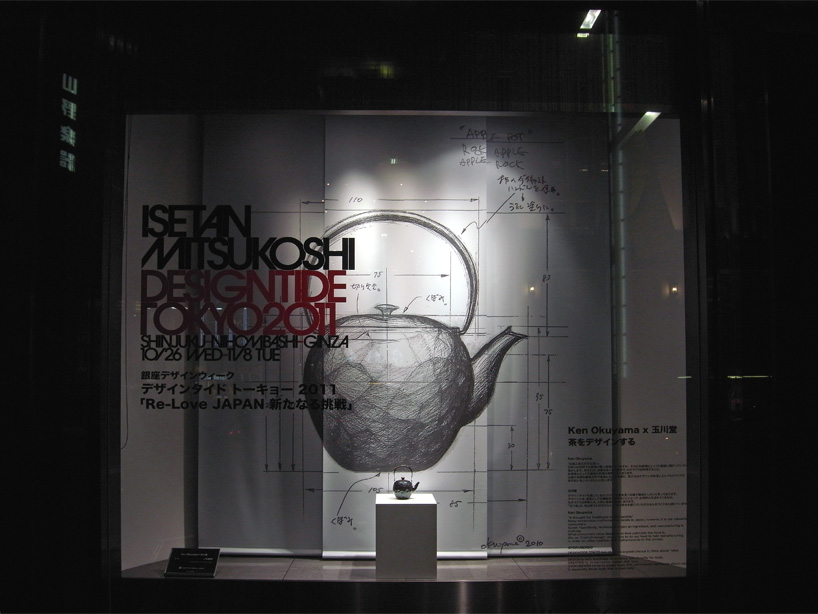 a day before the opening, designboom visited the ken okuyama exhibition at isetan mitsukoshi department store. 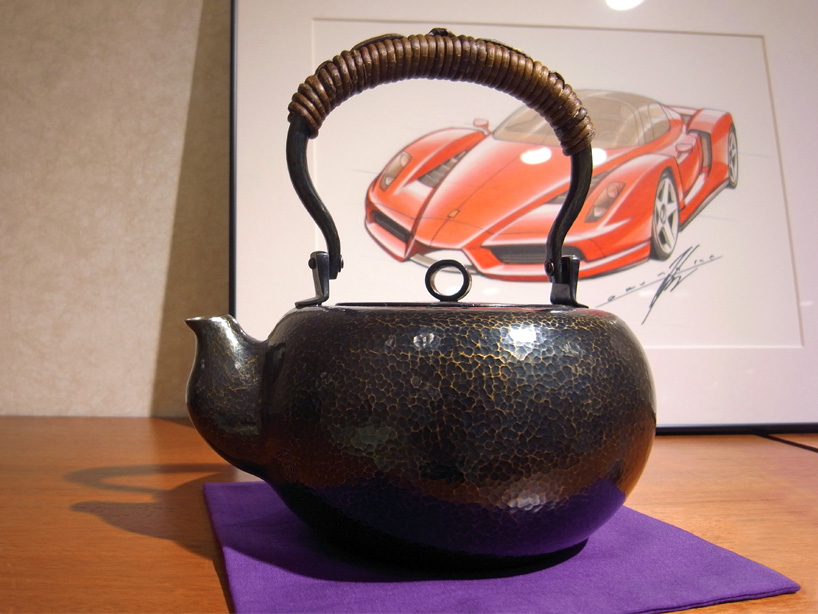 ‘a thought for traditional craftsmanship’ by ken okuyama ‘diverse world-class craftsmanship exists in japan, however, it is not always valued by the consumer.

here, technology is just an ingredient, but manufacturing is cooking.

the consumer’s value depends on how ‘palatable’ the food is.

we designers would love to do our best to help finding a contemporary identity to this kind of manufacturing, in order to utilize tradition and craftsmanship to the utmost.

tokyo designers week with the designtide tokyo event has given me a good chance to think about what creation really is.

DESIGN is born inevitably to enhance the functionality of goods.

CREATION is when humans harmonize with tools and goods.’ 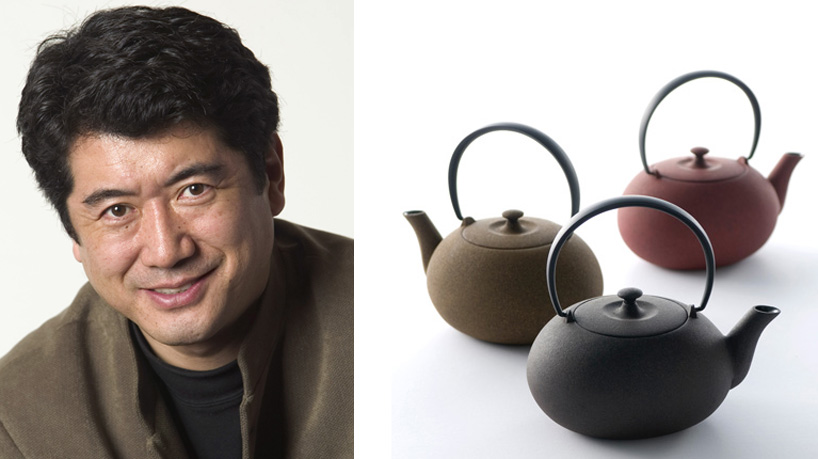 ken okuyama and a few of his creations 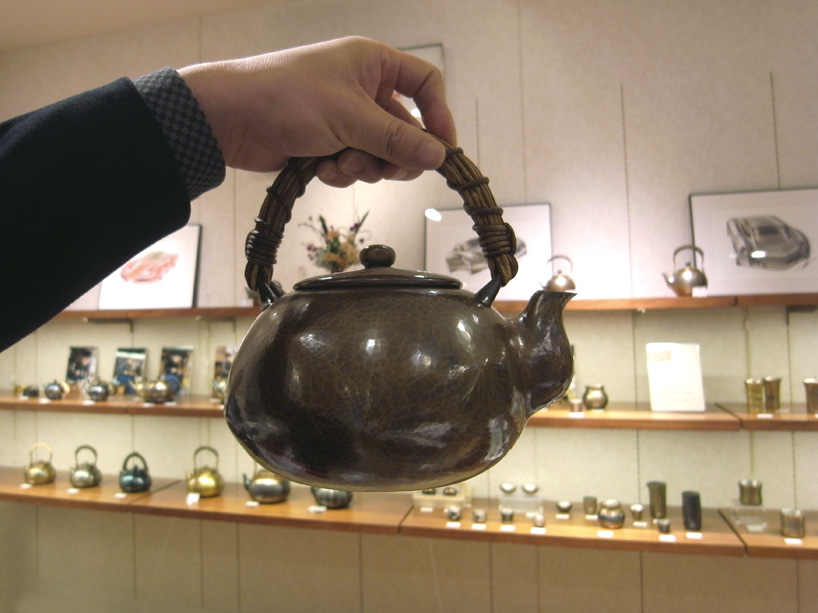 for a kettle, artisans usually make a round body and a spout separately and put them together later. an experienced smith, though, can make the whole shape, including the spout, from one oval-shaped sheet of copper. 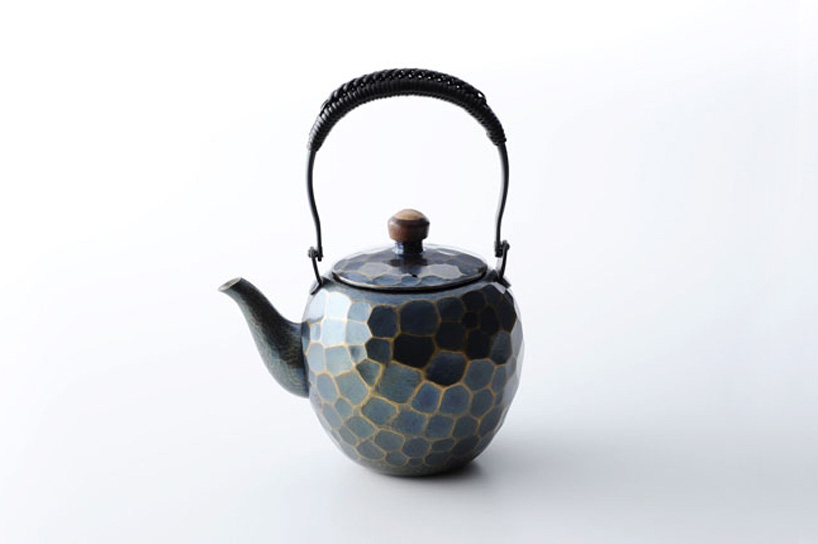 techniques for coloring the metal are also unique to gyokusendo

the hammered copperware called ‘tsuikidoki’. this more than two hundred year-old technique of pounding flat copper sheets into three dimensional goods such as kettles and teapots has been elevated to a fine art. 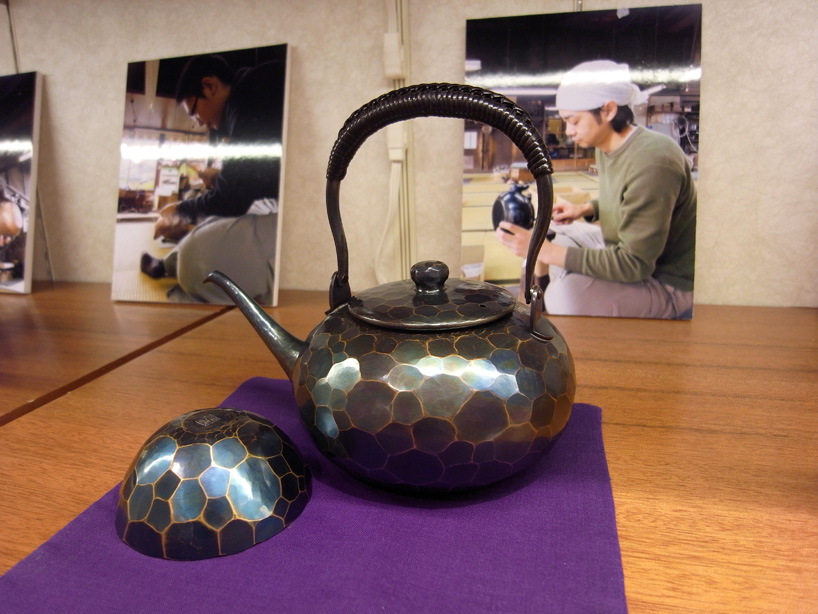 one element of the renown style of gyokusendo is the beauty of the surface oxidization. tin is fused onto the surface of the copper and soakes the pieces in natural liquids (like potassium sulfide) which add a nice patina. a coat of wax for shine is added. this method of coloring the metal can be manipulated to create a wide variety of colors. the mix of liquids and length of soaking can produce different shades. gyokusendo states to be the only ones in the world who know and use these techniques with such a perfection. 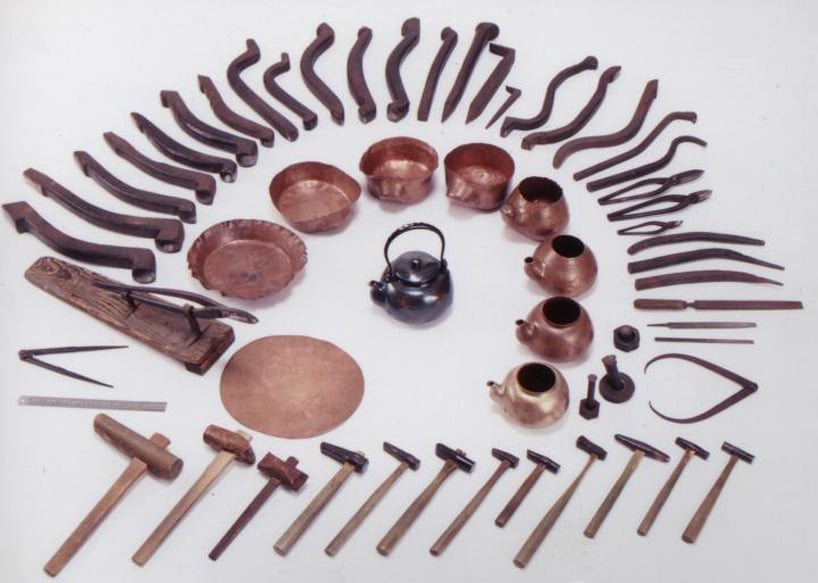 going counterclockwise from the bottom, you can see how a single flat sheet of copper is pounded into a three-dimensional form. first, artisans use a wooden mallet to pound a copper sheet into a circular shape. the copper sheet is just 1.2 millimeters thick. after that, they place the copper over a tool called a ‘toriguchi’ which is a sort of metal bar, and move the copper ever so slightly after each strike with a metal hammer. this technique causes the copper to shrink, and a vessel shape can be made. the trick is to strike the copper in such a way so that the strike marks don’t overlap. another important phase in the making of ‘tsuikidoki’ is the annealing process. the hard copper is heated in a furnace until it softens, making it easier to form. this annealing process is repeated many times during the forming of a single piece. a piece is complete when the entire surface has been beautifully contoured by the blows of the hammer. depending on the product, artisans sometimes do engraving on the piece after the shaping is complete. other pieces have a final step where the metal is given a patina. it takes quite a long time to complete a piece: about one week. (info courtesy gyokusendo) 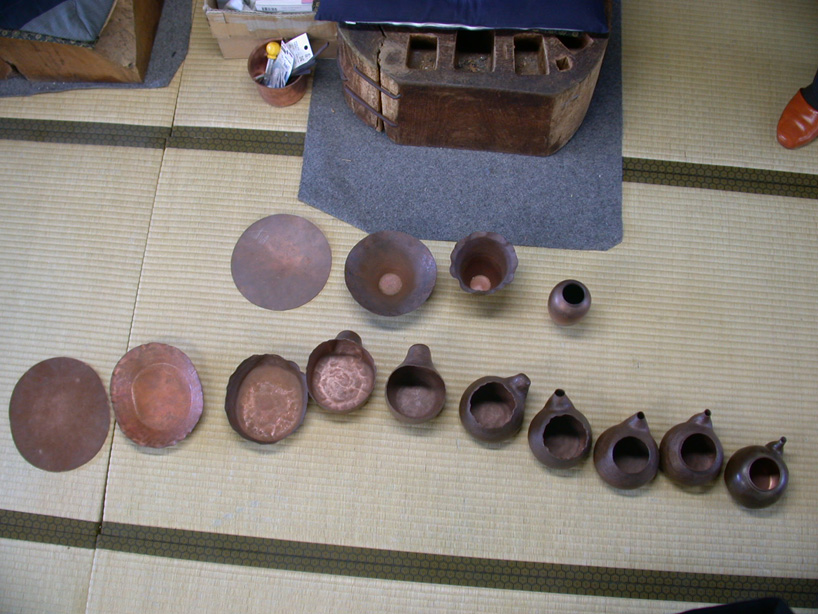 for a craftsman to learn all the techniques involved can take from twenty to thirty years. here the process is not split up, each craftsman must take responsibility for his own work during every step. the first challenge is to learn how to strike the copper plate so that it shrinks into a three-dimensional form (seen above from left to right). it’s difficult to make the copper contract, because it tends to get even more stretched-out, but a proficient artisan can make a kettle from one sheet of copper without any seams at all. 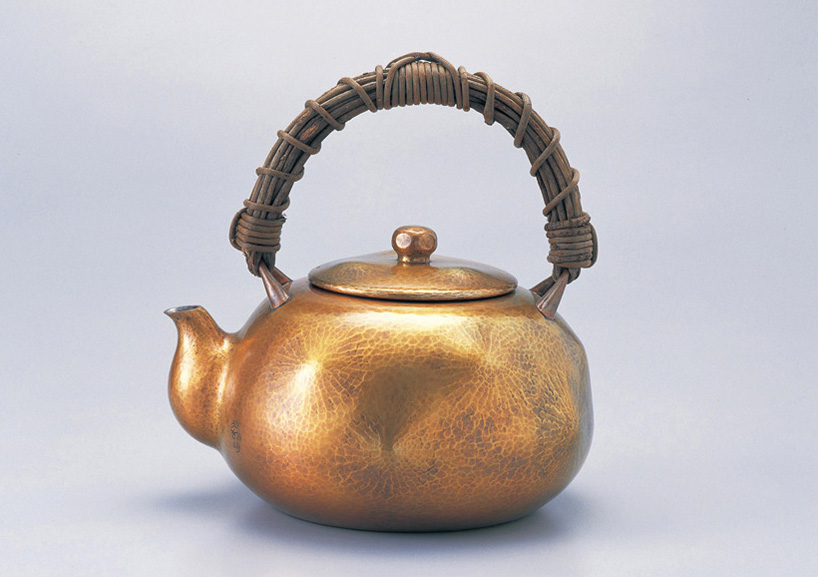 copper has antibacterial properties, and it purifies the water. with copper teapots and sake cups, the copper ions mellow the flavor of the tea and sake. over the time it becomes even more lustrous, and the flavor becomes more full and rich. the best qualities of copper are its ability to turn ordinary water into ‘good water’, to mellow tea, and mellow sake. 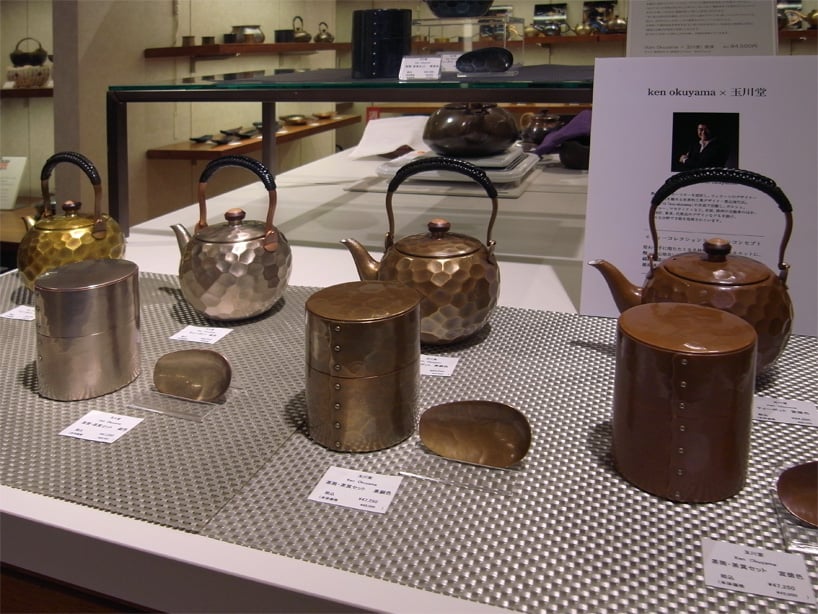 another view of the exhibition image © designboom 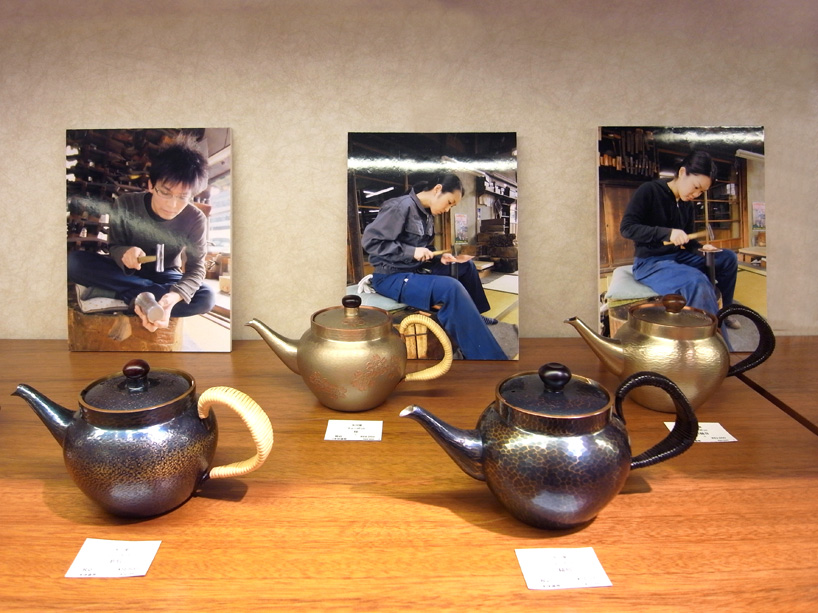 also historic companies like gyokusendo have to reflect how much they can shorten the time required to make one item. young artisans, at first, learn to make objects with a simple shape, like sake cups. the younger staff has to learn all the tsuikidoki techniques as quickly as possible, because artisan work of this kind is very expensive. the younger generation now studies new ways of handling to enhance cost efficiency, within the context of quality.

craftsmen at work use a stool, called ‘agari ban’. it’s not only a place to sit while you work, but it also has the added function of being able to hold the ‘toriguchi’. the stool is a section of a zelkova log — it’s a very tough wood, several ‘toriguchi’ can be inserted into it at one time, making it possible to work in a very efficient fashion. they don’t wobble – they’re very stable. 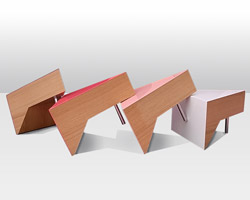 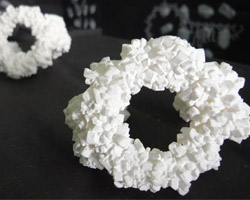