the history of tattoo began over 5000 years ago and is as diverse as the people who wear them.

tattoos are created by inserting colored materials beneath the skins surface. the first tattoos probably were created by accident. someone had a small wound, and rubbed it with a hand that was dirty with soot and ashes from the fire. once the wound had healed, they saw that a mark stayed permanently.

despite the social sciences’ growing fascination with tattooing, and the immense popularity of tattoos themselves, the practice has not left much of a historical record.

from left to right: japanese tattoo / the german annie frank 1911, postcard / flash from the past 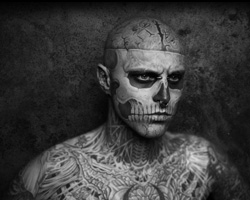