hyunjeong kim’s ‘ipari’ is a room-dividing modular system proposed for her 2017 bachelor thesis on product design in berlin university of the arts. the individual modules are made of heat compressed felt material named formfleece by becker brakel. the raw material of formfleece is produced out of recycled PET bottles. it is a soft felt-like material but by applying heat, it can be formed to have structural stability. this material is ideal to function as a room dividing system due to its sound-absorbability, deformability, lightness and structural stability. 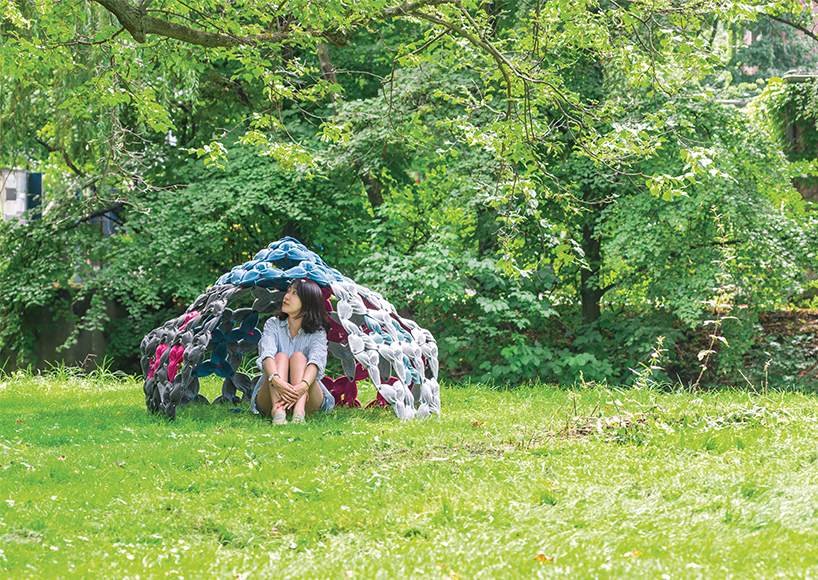 room in the nature

UDK berlin undergraduate hyunjeong kim found unique design strategies by experimenting and exploring the special properties of the material that are never tried for manufacturing so far. formfleece has a specific character of not only a fabric material but also a plastic material, which makes it possible to create diverse formal and aesthetic variations ranging from undefined organic forms to rigid shapes that can be easily made by form molding. 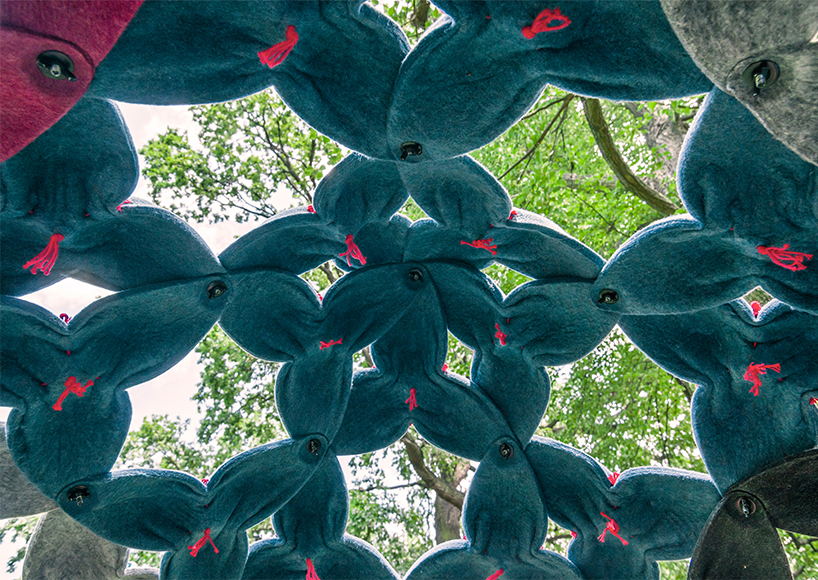 inside of the structure

the product designer set the goal of integrating these two different characters into the design. to combine the idea of free and rigid formability of formfleece, she decided to apply the two contrasting properties of the material according to the functions of the element. for the joining parts of the modular system, she applied a rigid and regular shape in order to create an easy assembly among the elements. for the other parts of the modular system, a free forming strategy is used for aesthetical and more soften appearance. 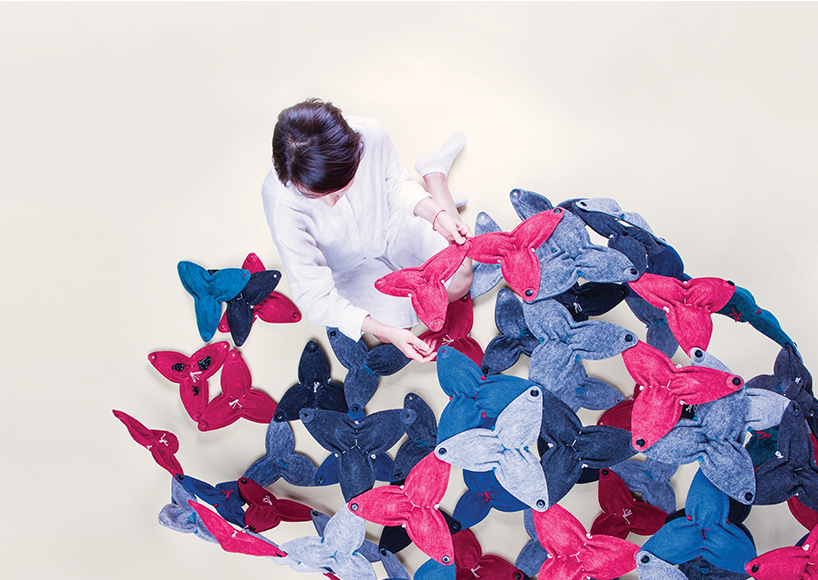 hyunjeong kim has designed a special mold frame for the module, which consists of three pressing molding discs for the joining parts at the three corners, and in the center a free form making base is created by pulling strings. in this system, the joints have regular shapes and the main body has a fully hand-controlled wrinkled convex shape. the wrinkled, three-dimensional free form gives more stability to the entire structure. the three affecting parameters on the final shape of the module are the distance of the stitching points, the pulling direction of the strings and the strength of the tension. 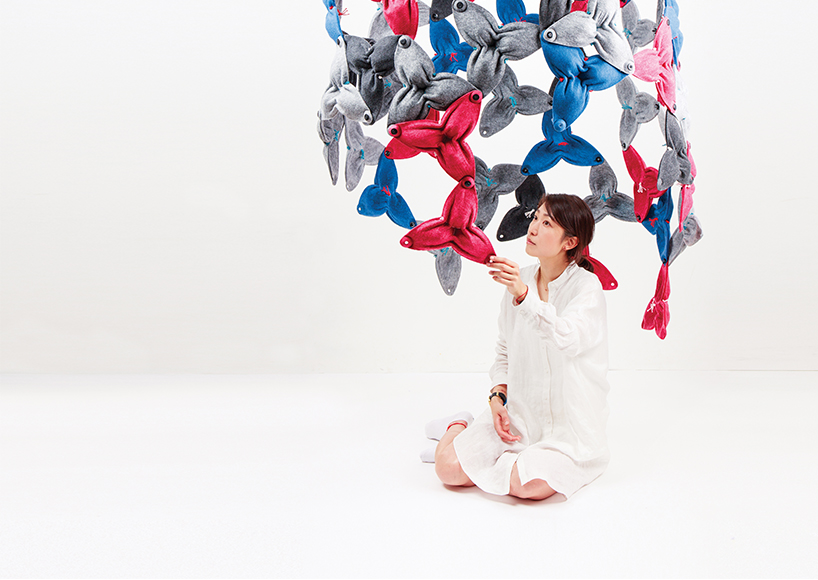 hyunjeong kim left intentionally the tension strings on the system in order to reflect the making process, not just for an aesthetical purpose. the connection of the modules has maximum flexibility not only in two-dimensional direction, but also as a three-dimensional structure. so, it is possible to combine the modules in a single layer and in multi-layers as well. in addition, the triangular assembly system functions like a basic facet of geometry so every form and shape are possible, as the user wants. 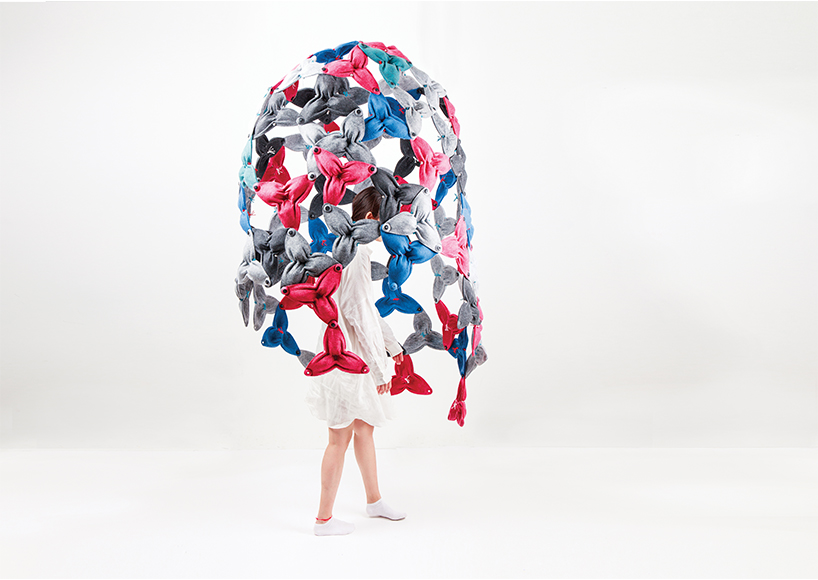 the joints of the module are built with custom designed high-pitched screws for easy and quick assembly and disassembly. since the formfleece is lightweight and stable, it can be even hung in the air or stand-alone without any supporting elements. ‘ipari’ means ‘leaf’ in korean and the idea is inspired by the leaves. during summertime, the leaves create cool shadow spaces under trees, and also it makes diverse characters as season changes by, such as opened and closed visual connection with outer space. like a natural phenomenon under a tree, people can build various forms and relationships between them and the others with ‘ipari’. 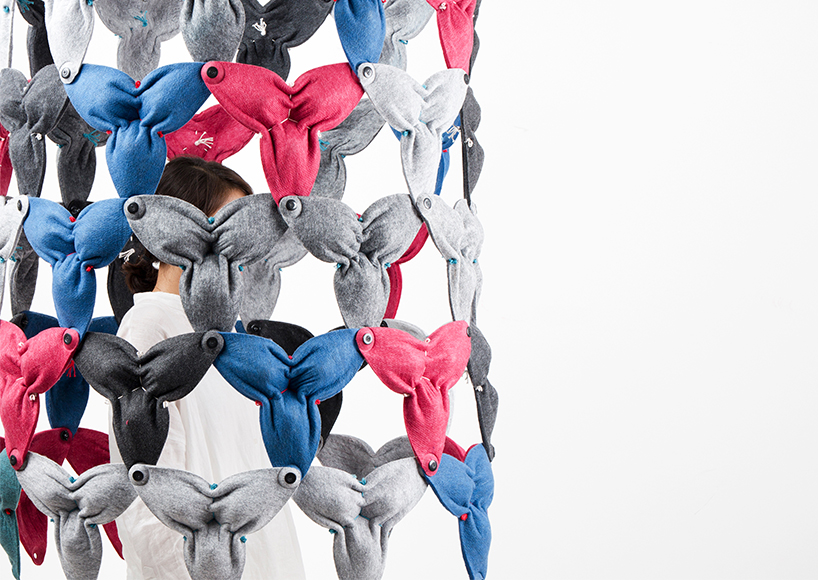 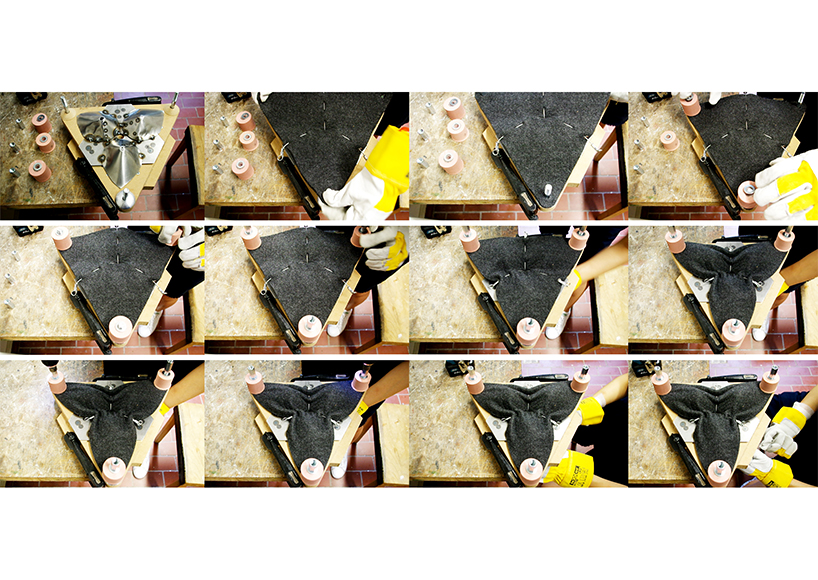 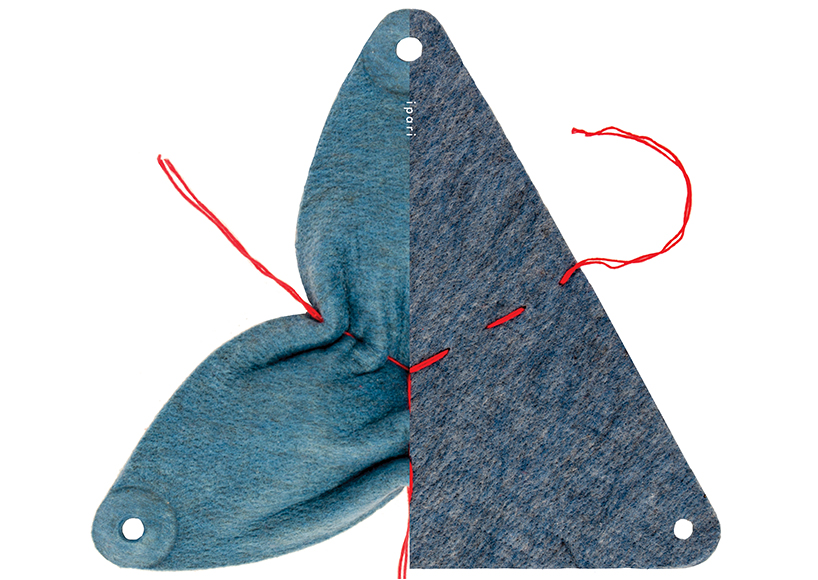 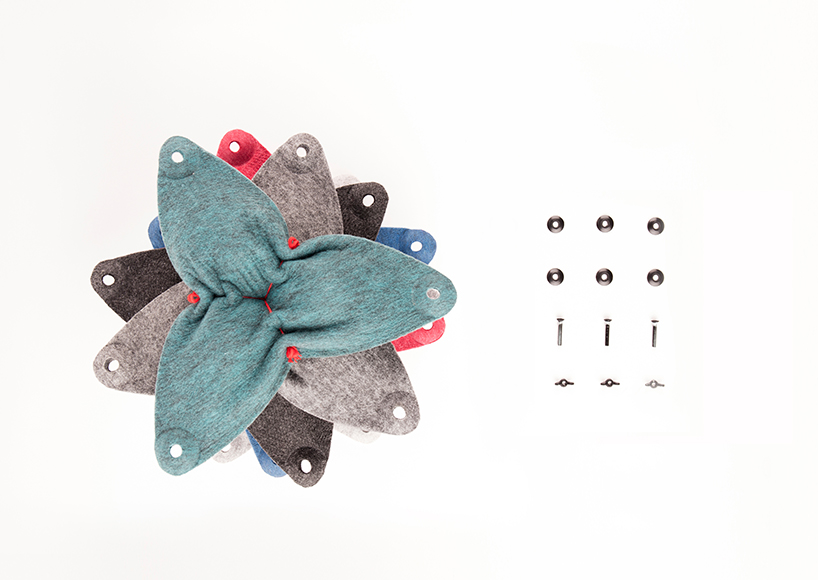 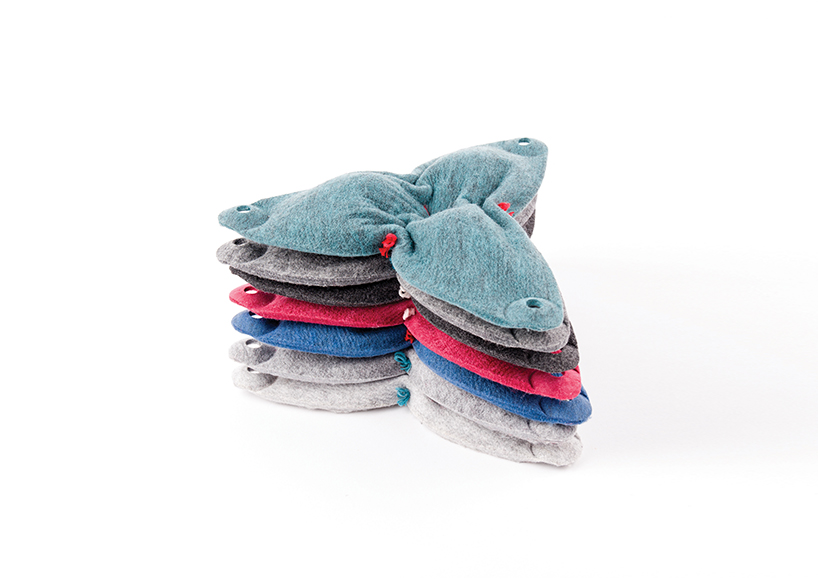 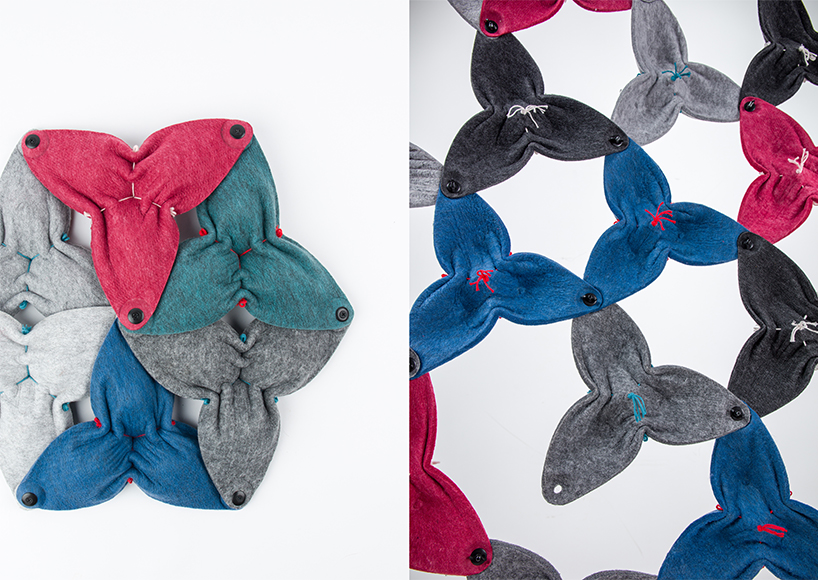 connection — front and back 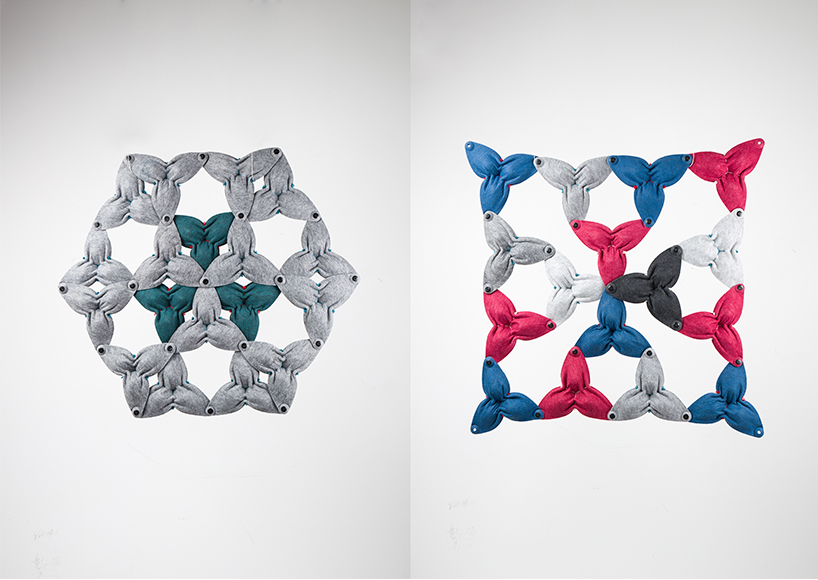