made with parametric design, the voronoi bicycle helmet is both safe and lightweight
28k views

this year’s iF concept design awards received approximately 15, 000 entries, 10,665 of which were successfully admitted for judging in the competition. individuals could submit concepts in four different categories: product design / industrial design, communication design / multimedia design, fashion design and architecture / interior design. in a two-stage jury session, 53 international design experts selected the top 100 ideas, which were then narrowed down to the 20 most outstanding concepts. yesterday, may 31st, an awards ceremony was held to acknowledge the 2012 winners. here is a round-up of those top acknowledged projects: 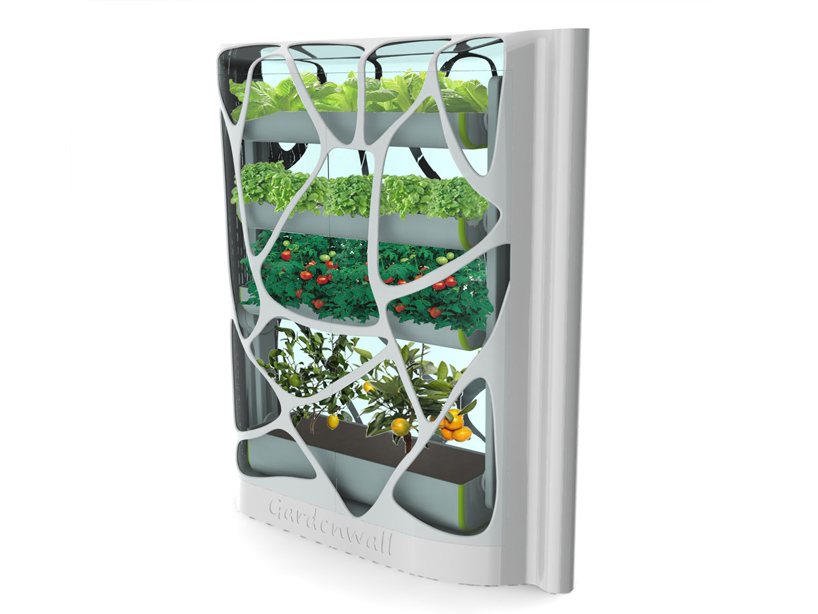 ‘gardenwall’ by matij colja of slovenia is an architectural element which enables one to grow their own food within the comforts of their own home instead of buying from supermarkets. it can be installed within ordinary facade elements of existing buildings, or stand as a partition wall. special photovoltaic glass produces electricity, while also providing a shadow when the sun is too powerful. in the summer, plants within the ‘gardenwall’ are cool and re-oxygenate air for your interior. 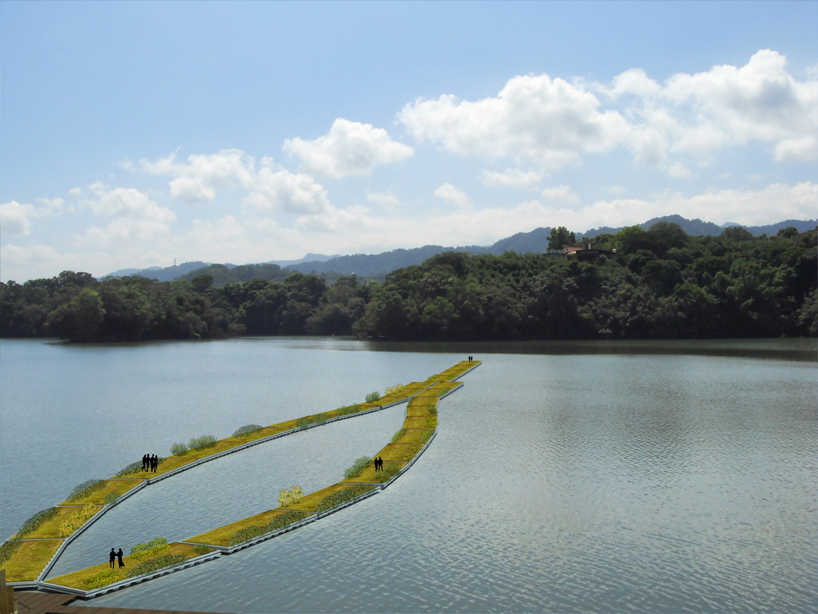 in taiwan, there are 19 main reservoirs, 6 of which have nutrient pollution. ‘duckweed pavement’ by chih hsuan li of taiwan tries to combine an ecological floating island with pavement on a lake harnessing what is seen as ‘negative’ into a public green space. 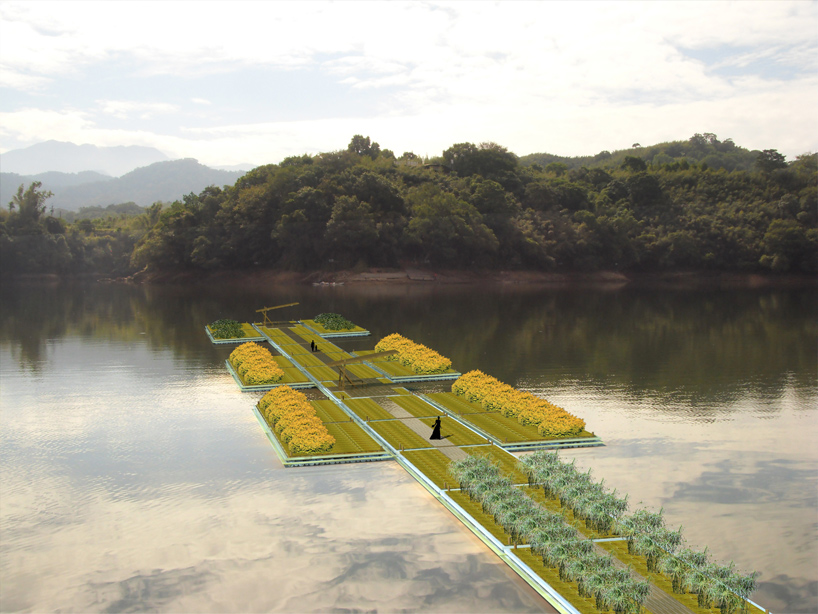 the ‘duckweed pavement’ could be arranged in different formations 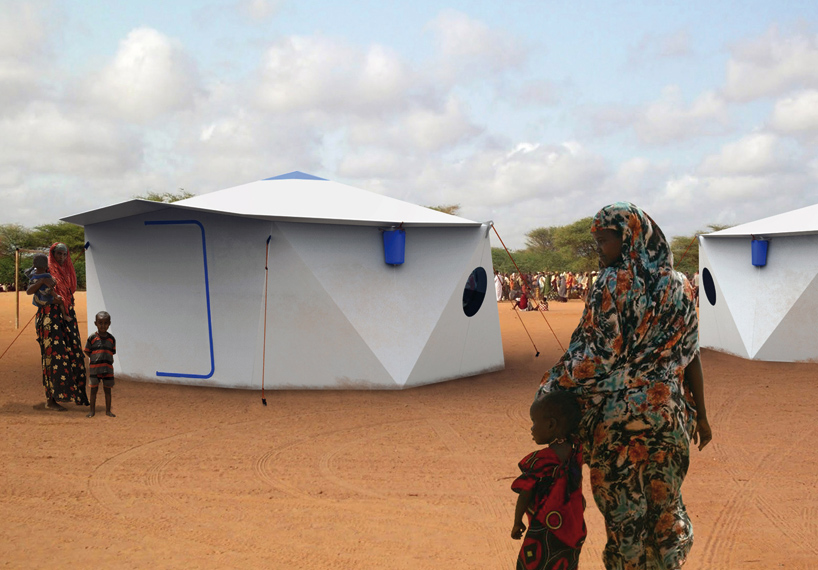 ‘interim disaster relief housing’ by daniel nikol of germany aims to provide emergency shelter to those who have lost everything in the aftermath of an earthquake or floods. this foldable emergency relief housing design is made from weatherproof twin-wall sheets constructed out of polypropylene (akyprint®). it provides protection against harsh climate and can accommodate up to five persons on a surface area of 15 square meters. factors to consider were simple construction, easy transportation as well as inexpensive production. 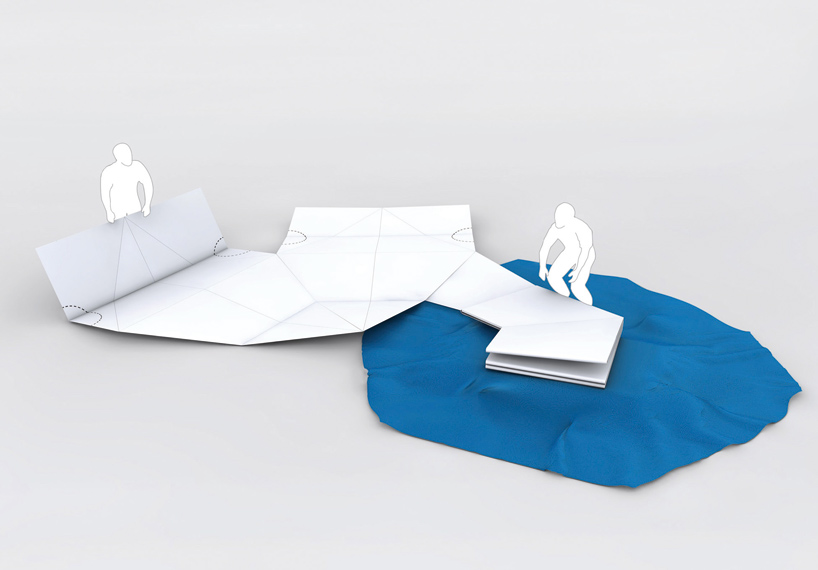 diagram of the house demonstrating its compact size 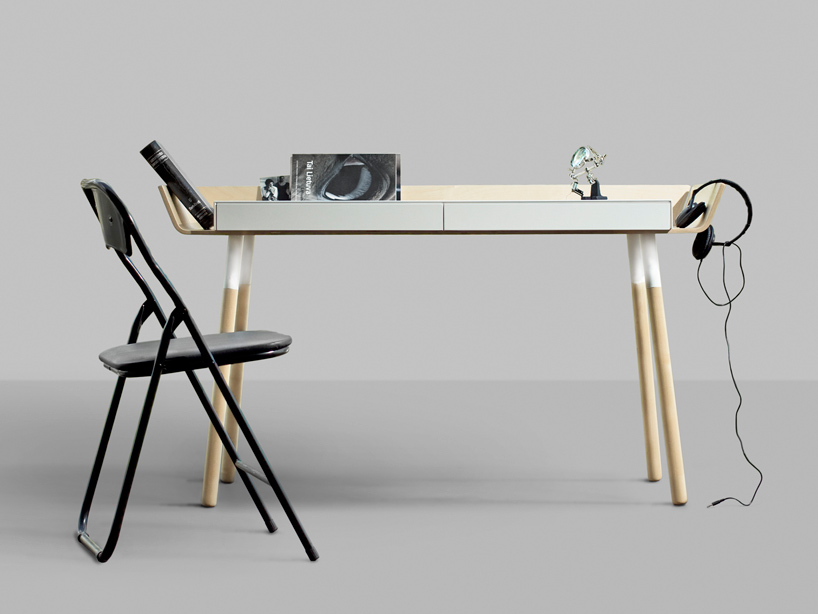 ‘my writing desk’ by etc.etc. of lithuania

‘my writing desk’ by etc.etc. of lithuania is designed to reduce the difficulties of working in a mess. a storage trough is organized around three sides of the table top where things may be placed off the main writing surface, but still in sight and easily accessible. the desk top can be utilized right up to its edges without worrying that things may fall down, and any unnecessary objects  can be pushed to the storage sides. the high edges of the design isolate it within the room in which it is placed. the wings are divided for simple construction, leaving a path for the wires. see designboom’s previous coverage of this project here. 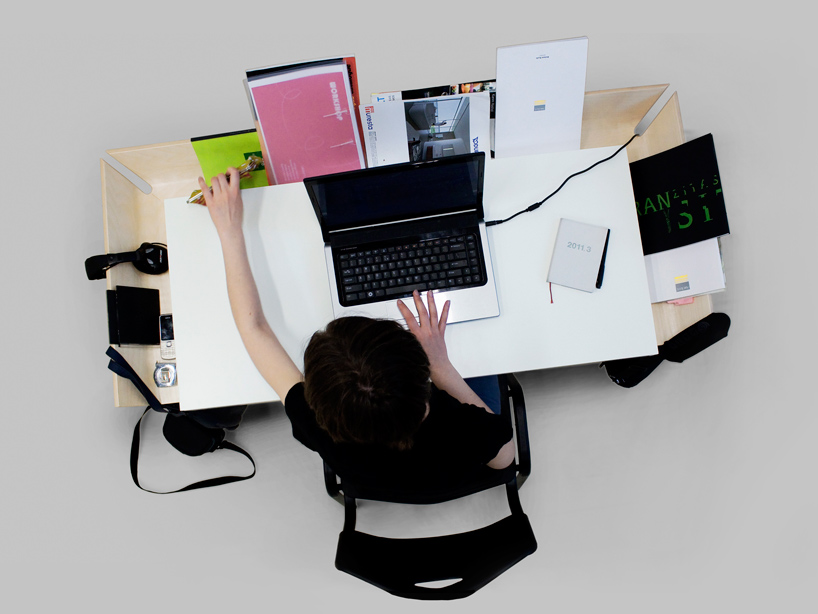 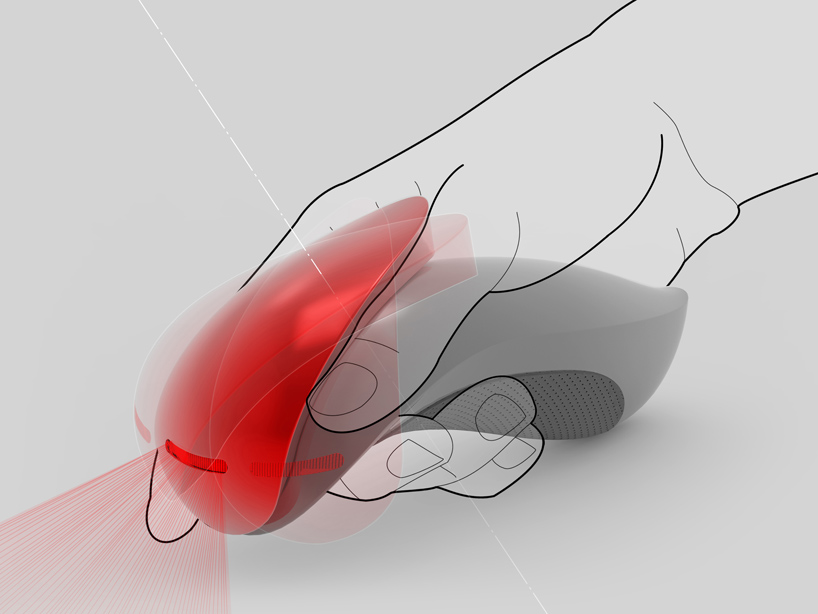 ‘rhino bird’ by guang xi, na zhou, yang shi of china is a navigation terminal designed to assist the blind. it connects to a mobile system to guide one’s direction and warn the user of any dangers or obstructions. the hand-held gadget gives users a clear impression of its course through the sense of touch. ‘rhino bird’ applies human instinct to convey information intuitively through contact and movement. 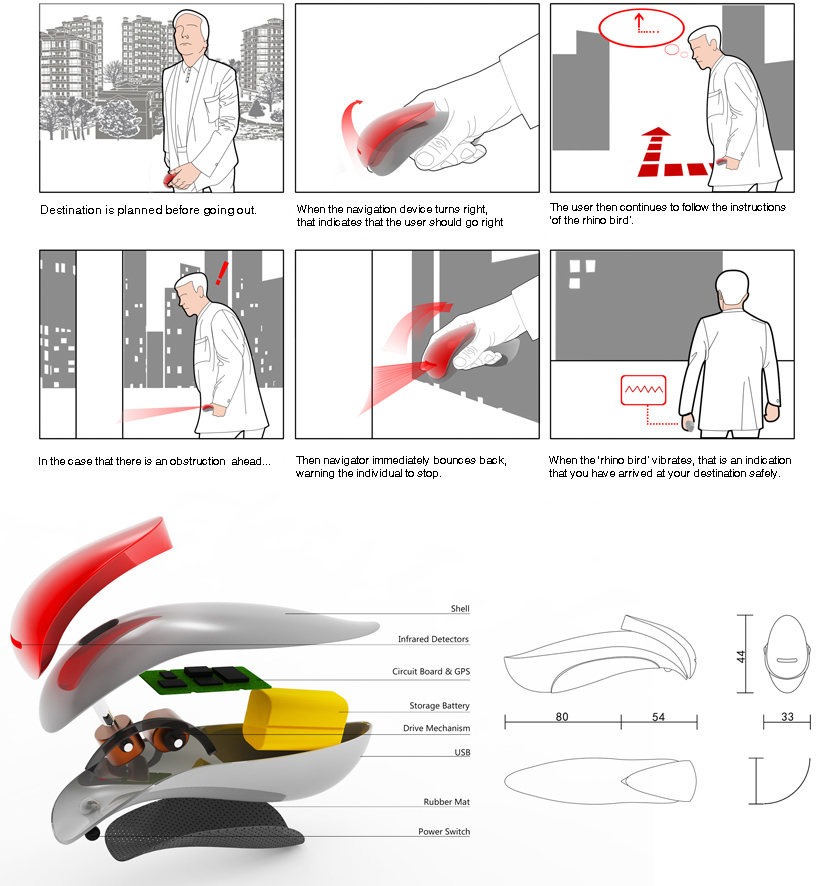 breakdown of ‘rhino bird’ components and illustrated scenario of use 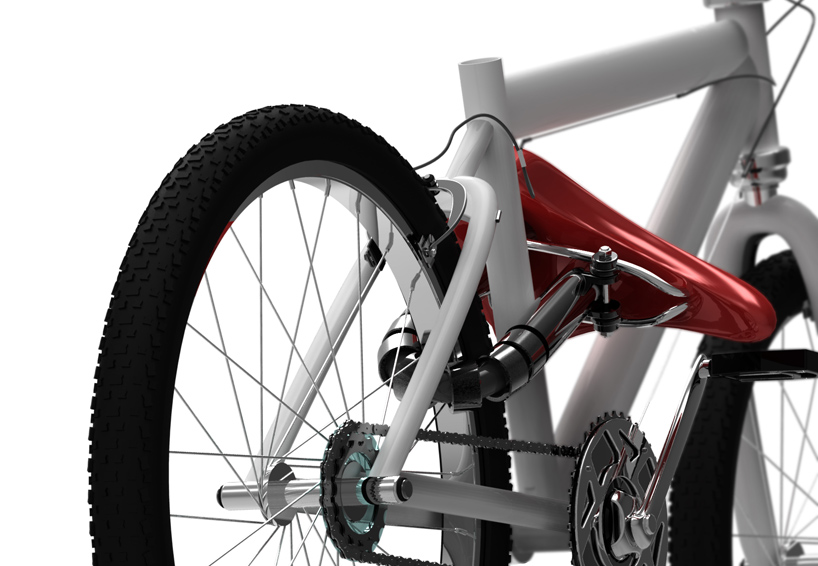 ‘saddle lock’ by lee chi gook, jeong da hui and gunsan jeollabuk-do of south korea aims to prevent bike theft which is often due to the easy disassembly of the two-wheelers and general loose locking designs. paddles in particular are the main target as they have no special anti-theft devices. usually, it is recommended that parts of the bike be separated and stored when they are parked and not in use. ‘saddle lock’ offers convenience whereby the seat of the bike is removed, but is then used to lock the bike in place. 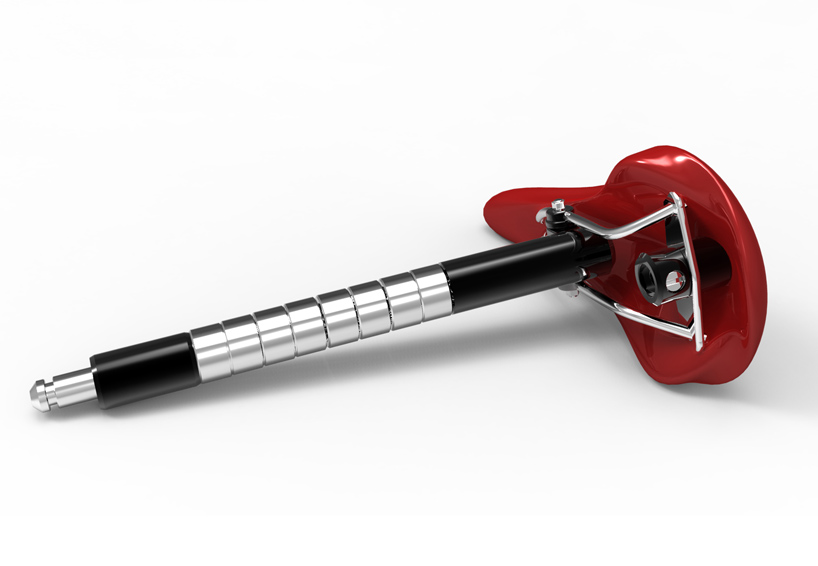 the bike seat acts also as a lock 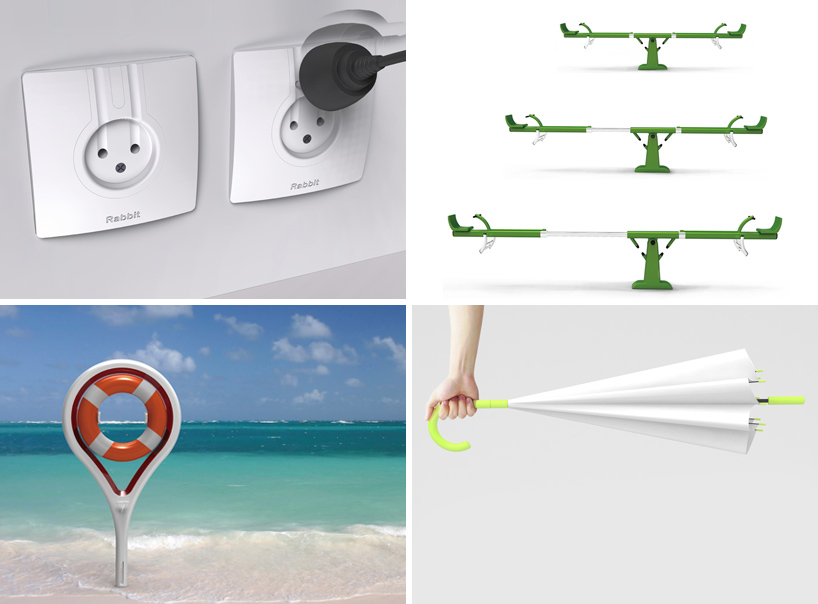 ’rabbit outlet’ by byung hoon ju, kyeong ki do of south korea offers two rails on an electrical plate, making it easy to locate and guide a plug’s prongs into the socket.

’balance seesaw’ by yu hong hai of china addresses the issue of children of different weights not being able to play together properly on conventional playground seesaws. according to a lever principle, this design has a special structure that can stretch the stem length to balance the load of both sides. the lighter child simply pulls their seat out further, whereby the mass is then automatically balanced out.

’pull & invert’ by gyeong-ju of south korea is an umbrella which folds in reverse order, whereby the tip of the umbrella is pulled towards the handle. the remaining water is collected when it is closed so that the user is not sprayed during the process. the design makes it a lot easier to get in and out of a care when it is raining, with out the umbrella getting caught in the door.

‘life light’ by chu-hao tso, tsung-hua chuang, hao-tien hsiang of taiwan is a buoy device which becomes illuminated at night when visibility is poor. it is a combination of a buoy, life preserver and warning signal, illuminated thanks to an LED water battery. in an emergency, ‘life light’ can be located immediately, even at night. 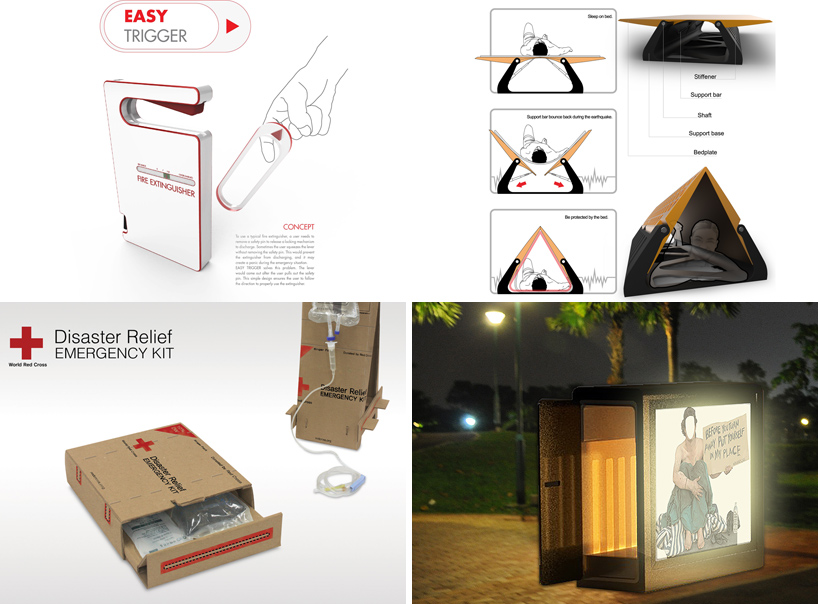 ‘easy trigger by woo jung moon and wonbo shim of south korea is a flat, space-saving fire extinguisher, designed so that it is very easy to use in emergency situations, in contrast to conventional ones where the locking mechanism don’t often open in panic situations. with ‘easy trigger’ you simply pull out one locking pin to use it.

‘turn-safety’ by guang xi, na zhou and xu liu of china is a bed which saves lives in the earthquake-prone regions of the world. if the frame detects a certain vibrating intensity, two side pieces shoot up creating a ‘roof’ over the individual occupying the mattress. should the person get buried under rubble, ‘turn-safety’ provides protection until the rescue team arrives.

‘ad-tramp’ by jiaxi wang, meiying shen, lekai zhang and mina ying of china is a city light billboard with an integrated sleeping shelter for homeless people looking for a place to sleep. the illuminated advertisement emits warmth which is directed into the shelter area, creating a comfortable atmosphere.

‘medical kit’ by changjun park of south korea is a cardboard display set-up responding to the lack of hospitals and health care in areas where natural disasters have occurred or in regions of crisis. the simple package unfolds into an intravenous, constructed quickly and easily. after use, it can be packed up once again. 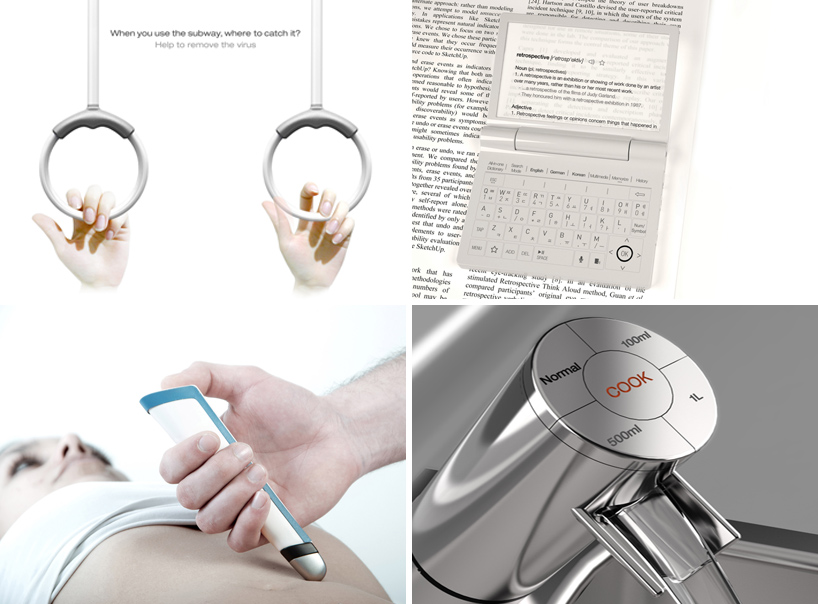 ‘clendle’ by park jae yoon of south korea is a subway handle sterilization design which reduces the risk of contracting contagious illnesses in public transportation. it is equipped with a sterilization function, whereby if the handle is turned, a natural antiseptic is released killing germs.

‘WYSIWYG dictionry’ by david lee and yuna kim of south korea makes looking up a word in a foreign language, while reading a book, a lot easier. all you have to do is hold the small, transparent OLED screen over the text and touch it to the corresponding word and a translation appears immediately. you can even do so with entire sentences by simply running your finger over the full sentence.

‘cook’ by jai il bae of south korea, is a water-saving faucet for the kitchen. it features buttons which offer measured quantities of water for example – 100 mL, 500 mL or 1L, while also functioning as a standard tap.

‘confio’ by rebecca loaíza of germany is a diagnostics system for the digestive system. the patient swallows a ‘confio’ capsule which contains several miniature cameras. the capsule has a wireless connection to a control unit, providing the physician with a three-dimensional view of the small intestine in real time. the patient requires no sedation and doesn’t need to undergo an unpleasant procedure.

‘everyday rituals’ by uta tishcendorf of germany is a technological development in the field of knitted textiles. referencing the japanese art of paper folding – origami, the three dimensional fabric which is durable, flexible and features memory behaviour, equipped with a multifunctional movement mechanism.

‘magical buttons’ by xuefei liu, di fang, long lu and jinghua guo of china will never put you in the embarrassing situation of forgetting to zip up the fly of your pants. in this design the zipper itself is also the button so that you actually have to go through the act of zipping up your slacks if you want to close the button.

the official organizer of the competition is iF design talents GmbH in hannover, a company that is solely devoted to promoting young design talent, along with the support of the following parties: gold sponsors include CeBIT 2012 in hannover, hansgrohe AG (schiltach), LG hausys (seoul/south korea), samsung electronics co. ltd. (seoul/south korea), volkswagen AG (wolfsburg) and if international forum design GmbH (hannover). coway (seoul/south korea) is a bronze sponsor, and designxport hamburg is a partner.all of the entries in the competition will be on display at the kunsthaus hamburg from may 31st until june 17th, 2012.

made with parametric design, the voronoi bicycle helmet is both safe and lightweight

×
keep up with our daily and weekly stories
508,254 subscribers

keep up with our daily and weekly stories
508,254 recipients