last week designboom visited NIKE‘s world head quarters in oregon, USA – where we were kindly shown around the NIKE sports research lab and introduced to some of the brand’s latest and upcoming products. during our visit paul francis, senior director of footwear innovation at NIKE gave us a presentation on evolution of NIKE’s flywire technology and its grwoing influence on an increasing number of sports, the latest example being the NIKE vapor ultimate football cleat.

we asked paul to tell us a bit more about his background and how he arrived to work at the infamous NIKE kitchen, his current influences and what the kitchen team look for when recruiting new members.

designboom: please could you tell us a bit about your background and how you came to work at NIKE?
paul francis: I have a background in sports medicine and I was working with UK sport in their performance arm for four years before I joined NIKE. my work was focussed on cycling and rowing, working directly with athletes and understanding how we could improve their performances. I’ve been lucky enough to work across a broad range of experiences from consulting, start ups and private practice, even coaching my way through university, but the link between everything has always been an obsession with making athletes better at what they do.

a few years ago I met tony bignell (vice president, footwear innovation at NIKE) and he offered me the chance to work with him at NIKE’s innovation kitchen and try to change the face of sports performance. it was impossible to say no. I’ve been here at NIKE for just over two years now. 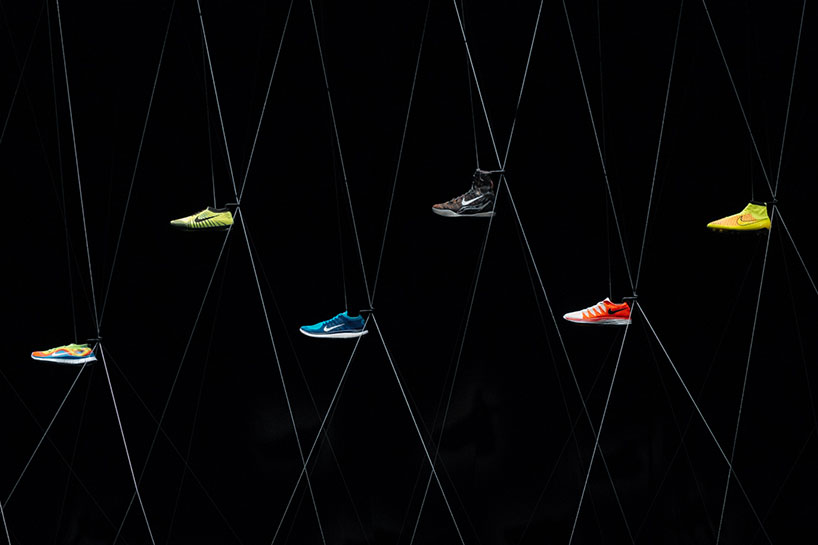 the evolution of nike flyknit – from running shoes (2012) through to basketball shoes and football boots (2014).

DB: how did your previous work prepare you for what you do now?
PF: for quite some time now I’ve looking at how the body and sport equipment work together but now I focus on the ankle and the foot and how they specifically work with a shoe. as I mentioned, previously I had focused on rowing and cycling which are both sports where equipment is crucial to an athletes’ performance, the foot always plays a critical role in human performance across many sports so shoe design was a natural progression for me. it’s a broad area of design because different athletes need different things from a shoe so we always have multiple challenges on our hands at any one time. 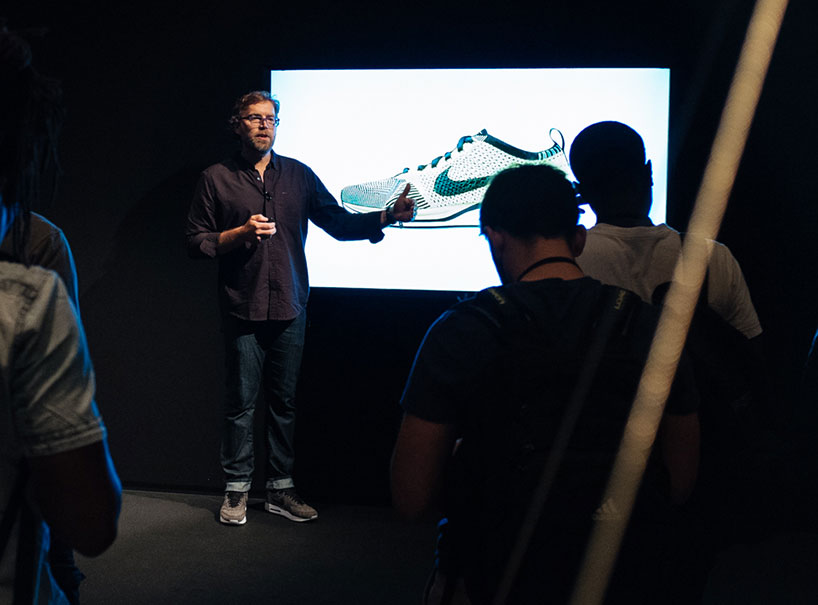 paul talking about the evolution of NIKE flyknit.

DB: what do you think your strongest skill is?
PF: my education provided me with a strong understanding in how the body works. this gives me a strong and consistent focus on how to make athletes better – ultimately we are trying to improve the function of the body if we are trying to augment performance. to understand the mechanics helps when inventing against it.

I also have a lot of enthusiasm and have learned to use it as an energy source (along with caffeine) so usually I can imagine a fully resolved design solution quite clearly. what I like to do is fast forward through to the final solution and get very excited and enthusiastic about it and use that enthusiasm to build the momentum needed to overcome issues on the way to finishing a project. enthusiasm creates momentum – momentum creates change.

DB: what have you enjoyed the most since you started at NIKE?
PF: without exaggerating or sounding like a cliche, I’ve really enjoyed every day of this job so far. it’s very particular and involved and I love that. it’s a dream job for me, being able to collaborate with such talented people from all over the world, and being asked to push possibilities every day. it’s probably one of the few jobs in the world where you are allowed to fail repeatedly on the journey to a successful breakthrough. 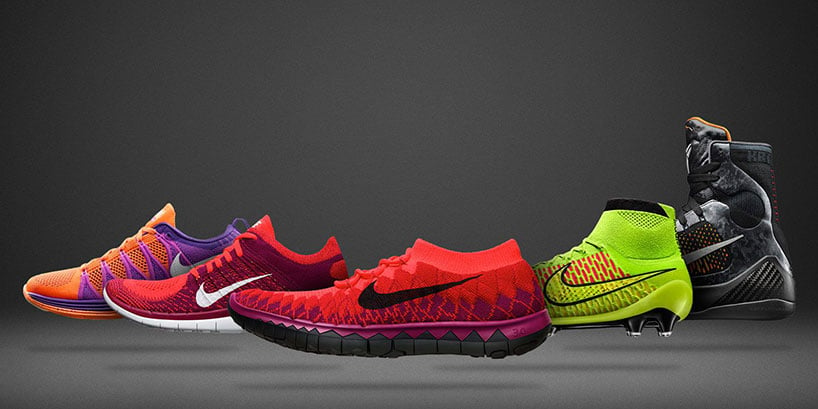 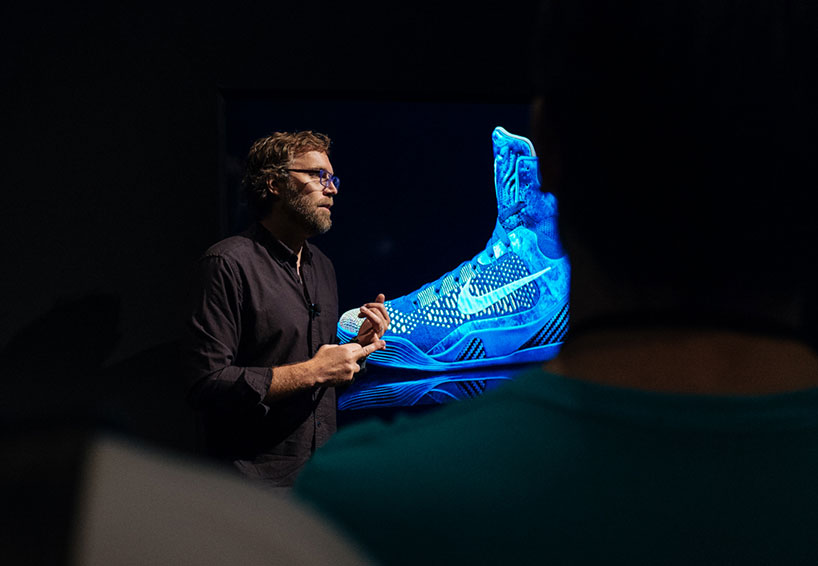 DB: innovation is a term used quite broadly these days – what does it mean to you?
PF: true, it’s a word that’s thrown about a lot but if you are as critical of your work as we are then you don’t use it lightly. many people want to be innovative, but not as many actually want to create change, which leaves the term used a lot more more than it’s actual definition.

innovation is about the invention of something that did not exist before, to solve a problem in a better way than anyone had previously,  and doing that with results and a mass change in the way people think about things. that’s why something like NIKE flyknit can without question be considered truly innovative – it’s changed processes, production and performance and two years since it’s launch it’s still continuing to do so by entering different sports. 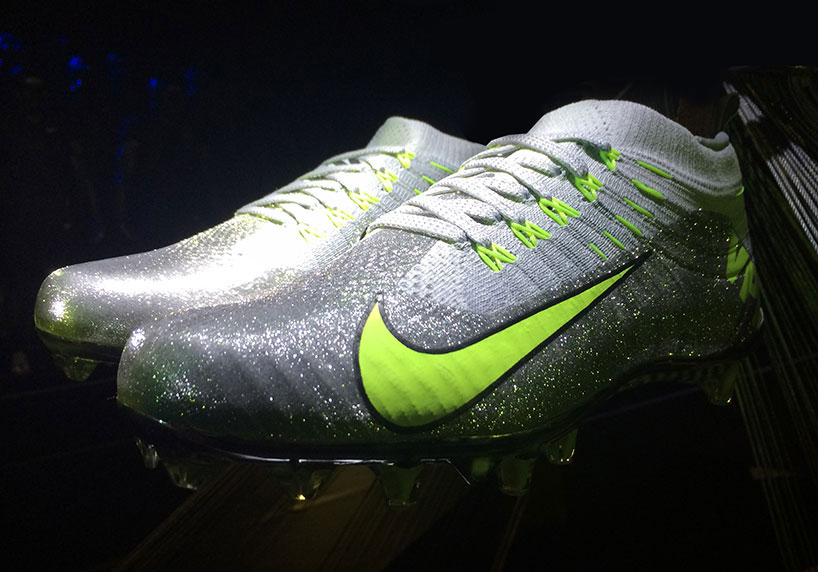 DB: as someone responsible for innovation what do you do to keep yourself fresh?
PF: spend time with friends and family – that’s very important to me. I know when to relax and when I can’t afford to. you need a lot of head space to think differently and surrounding yourself with great people helps that immensely. innovation is hard, it’s messy and there’s lots of failure along the way. lots of rethinking. so enthusiasm is a very important energy source that helps you see everything through. if you love your job, it’s easier to stay up-beat about things and luckily that’s the case for me. 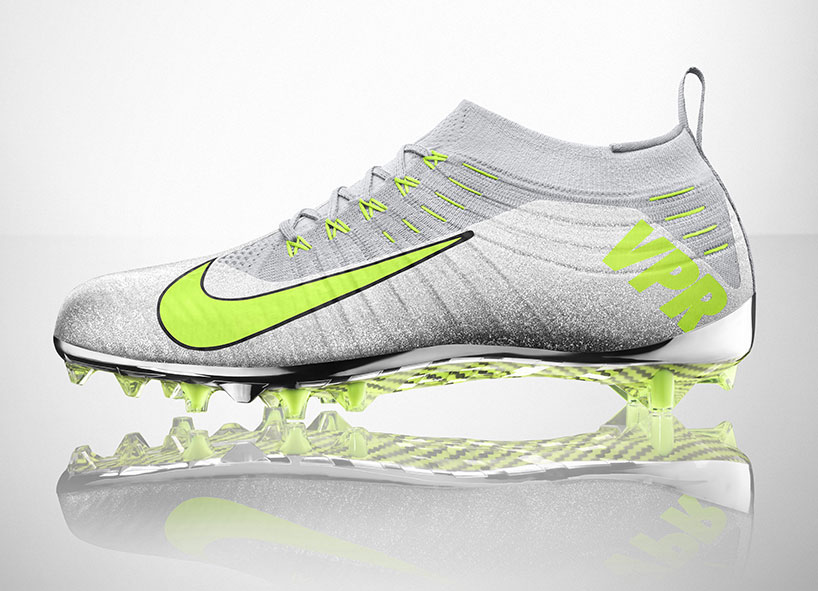 DB: what are you currently fascinated by and how is it influencing your work?
PF: well, I can’t tell you too much on that front but we are already thinking forward to tokyo 2020 and what we want to achieve there. for myself that’s started by looking at ancient japanese armor, and the relationships between japanese warriors and the master-artisans who made their equipment. that’s something I can see a connection with when I think of our athletes and NIKE. if you think of a samurai warrior and a samurai sword maker – they are making something unique for that warrior and we want to offer our athletes unique gear that will give them the edge over their opponents in the same way. 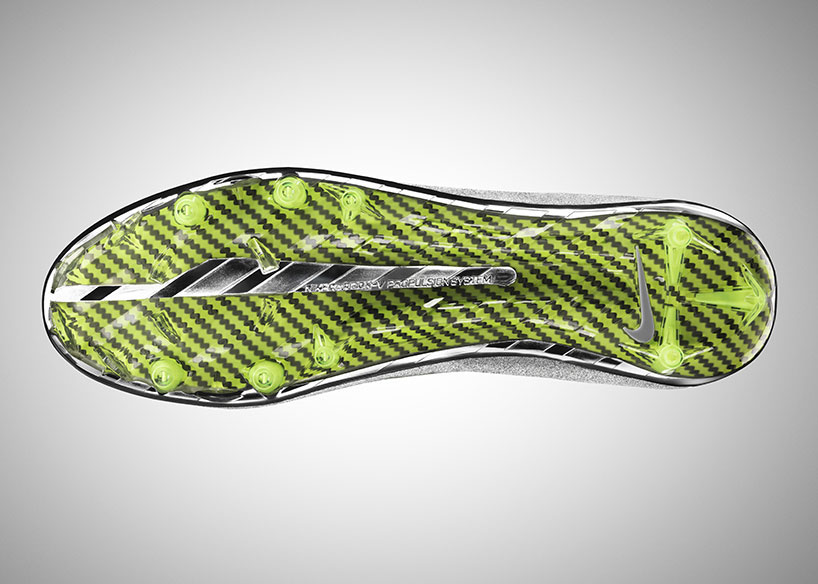 the studs on the NIKE vapor ultimate are designed for zero-slip traction in both acceleration and breaking. the pattern allows for optimal ignition off the back foot, hitting the precision cuts to avoid a tackle, and the explosive propulsion required to make a critical catch.

DB: what advice would you give to designers who want to enter the field of sports design?
PF:..there’s a lot of people out there doing similar things so always ask yourself ‘what separates you from them?’ – that’s what people are always looking for.  athletes measure themselves in seconds and centimeters, holding ourselves to that same kind scrutiny is important. there is a beautiful simplicity to what we need to do and that creates a strong filter: will it make an athlete better? 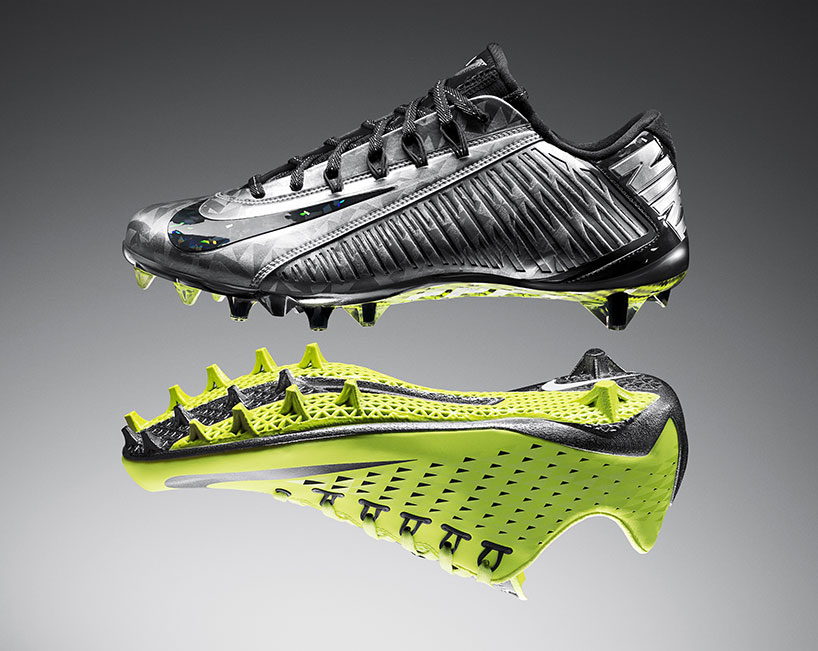 the vapor ultimate cleat builds on foot plate technology developed for the vapor carbon cleat (top) and the laser talon cleat – both the product of extensive research by NIKE’s innovation kitchen into how rapid prototyping could help NIKE develop a foot plate that’s lighter and quicker and  allows for improved directional changes.

DB: what particular skills do you look for when your hiring people for your team?
PF: talent is important obviously but so is enthusiasm, as I was saying — enthusiasm gets things made, gets things done. also, I think a great designer has to be willing to collaborate and work as part of a team. the ideas, the solutions and the process is all part of a shared experience from the athletes’ insights to the finishing touches of production.