the abandoned bus that starred in the movie ‘into the wild’ has been removed by alaska authorities as a public safety measure. known as ‘bus 142,’ or the ‘magic bus,’ the vehicle was popularized by john krakauer’s 1996 book ‘into the wild,’ and sean penn’s film adaptation in 2007 that chronicles the story of 24-year-old adventurer chris mccandless, who spent the summer of 1992 in the bus and died of starvation after 114 days. the bus, which was located 25 miles west of the parks highway on stampede trail, had attracted numerous travelers — many of which had come to harm or required search-and-rescue services while hiking in harsh weather or crossing the perilous terrain.

now, in a coordinated effort with the department of natural resources (DNR), 12 alaska army national guardsmen removed the vehicle on june 18, 2020. holes were cut in both the roof and floor of the vehicle so that the dual point chain kits could be secured properly to the frame of the bus before it was airlifted by a CH-47 chinook, an american twin-engine, tandem rotor, heavy lift helicopter to a secure location.

according to DNR reports, there were 15 bus-related search and rescue operations by the state between 2009 and 2017. as recently as february 2020, alaska state troopers rescued five italian hikers, one of which suffered severe frostbite. individual travelers from switzerland and belarus drowned in 2010 and 2019, prompting public outcry, particularly among local alaskans to reduce or eliminate the hazard. 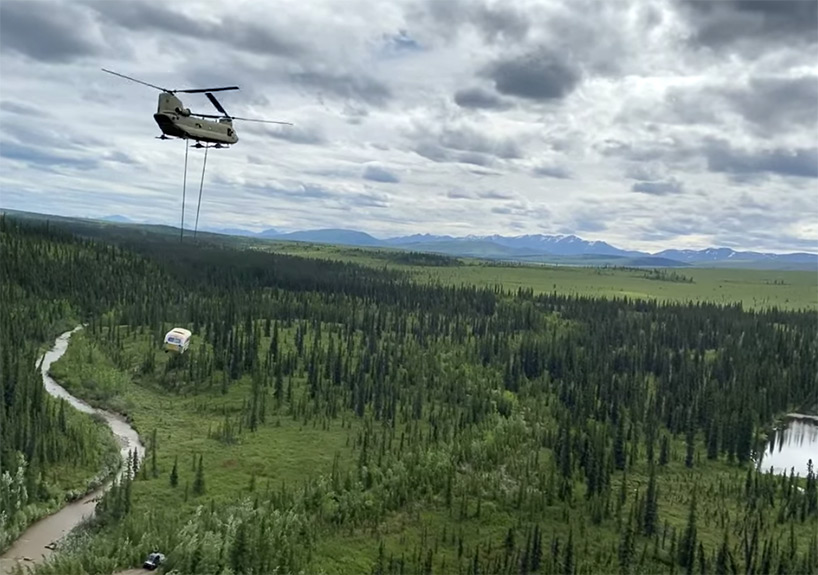 ‘after studying the issue closely, weighing many factors and considering a variety of alternatives, we decided it was best to remove the bus from its location on the stampede trail,’ says commissioner for the department of natural resources corri a. feige. ‘we encourage people to enjoy alaska’s wild areas safely, and we understand the hold this bus has had on the popular imagination. however, this is an abandoned and deteriorating vehicle that was requiring dangerous and costly rescue efforts, but more importantly, was costing some visitors their lives. i’m glad we found a safe, respectful and economical solution to this situation.’