the jacksonville jaguars unveiled a new logo back in february that replaced the design they’dused since their formation in 1995. that redesign was the first step in the revamping efforts of new owner shad khan and today sees the next step – with a new uniform designed by NIKE, that features the first two-tone (matte / gloss) helmet in the NFL’s history.

‘these uniforms balance our tradition with the future. the military-style badge on the front of the jersey speaks directly to the strong relationship we have with our hometown of jacksonville. these new uniforms leave no doubt about our brand essence of being proud, bold and committed. I believe our new look will energize and inspire both our players and fans. it’s clearly a new era for the jacksonville jaguars.’ –  jaguars owner shahid khan 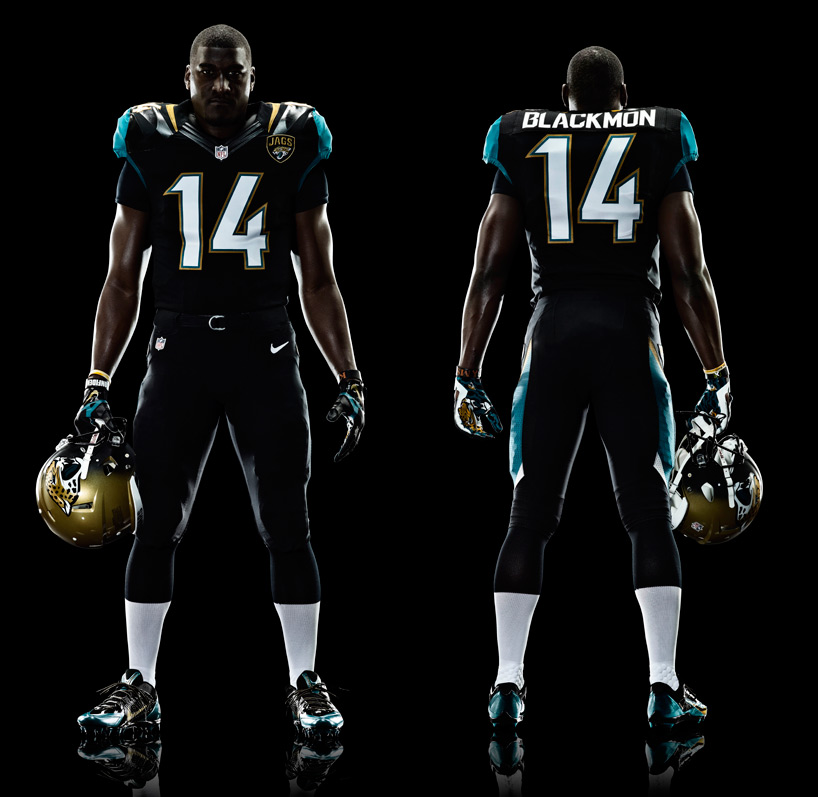 DB: what was the starting point or brief for the uniform design process?TVH: the first source of inspiration for the new uniform came from the city of jacksonville itself, the spirit of the american dream that’s highly evident there – in the people of the city, the fans, the military fly-over before every game and its connection to the US navy. secondly was the pioneering spirit of both bill bowerman and the JAGS new owner shad khan, innovators such as them don’t look backwards they look forwards – they want to push things forward and thats what we wanted to do with this new uniform. thirdly, and this is perhaps the most obvious, was the jaguar – many of the players want to embody the spirit of this animal when they come out onto the field – the jaguar comes out from the shadows and attacks. the new logo is fierce, a jaguar on the hunt and we wanted to carry that through with fast lines and sharp edges. 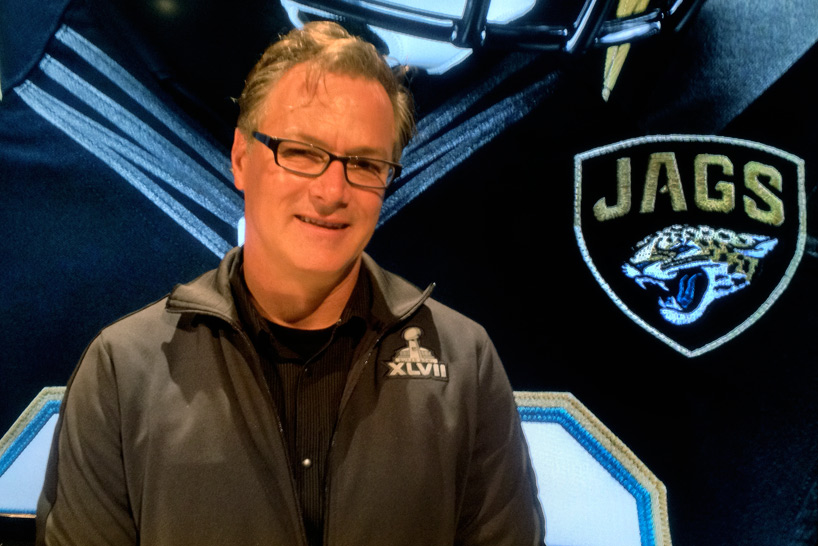 DB: what are the most notable changes / new design features of the 2013 uniform?TVH: there’s a lot – but the first thing you’ll notice is the color – we used black for the home uniform. its a bold modern approach that will give the team an iconic look.

over the shoulders there some accentuated, shiny lines that suggest forward movement.these play again with the idea of attacking from the shadows, coming from the dark into the light. similar accents can be found on the shorts – with small flashes of gold and teal bar, that represents the water and sun of jacksonville.

the next thing is the new logo shield – the logo accompanied by the word ‘JAGS’, the team is known within the NFL as the JAGS so we placed that proudly over the heart.

the new stretch twill numbers and letters are set in a bespoke typeface developed as part of the team’s new image, again its’ angular and sharp, characteristic of the jaguar.

the ‘jewel in the crown’ so to speak is the new helmet. its matte black at the front and fades into shiny gold at the back of the helmet with a large jaguar logo over the top on both sides. 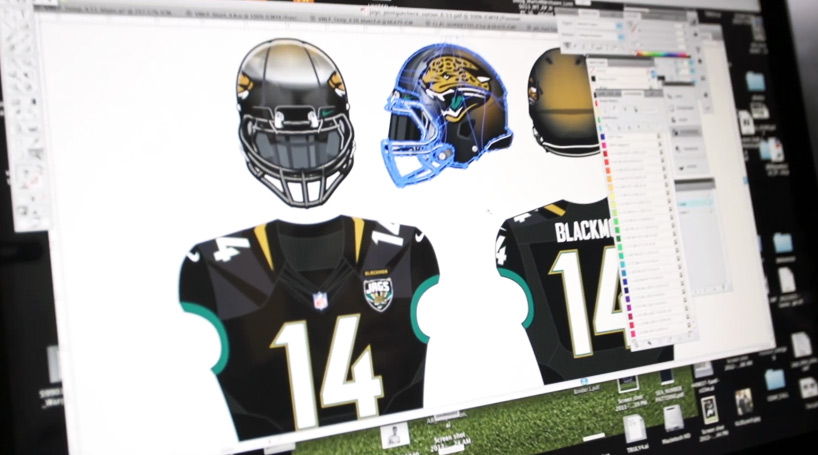 DB: how does the development of new materials and padding come together with the top unifrom?TVH: there is a team specialized constantly working on innovation – developing every element of the NFL uniforms – from a material and functional stand point, what we call an integrated system of dress . the NFL NIKE elite 51 uniform focuses on creating a system where the baselayer, padding, jersey and pant work in concert. lightweight padding is also integrated directly into the crucial‘hit zones’ in the baselayer. new innovations include integrating flywire technology into the neckline to reduce weight and provide lockdown fit over pads, increasing sleeve articulation for better range of motion, and integrating new four-way stretch fabrication to provide a streamlined shrink-wrap fit.  this is the canvas we work with for each team’s uniform.

DB: how is the design process for the re-design of a team’s kit such as this?TVH: we select designers with different strengths and form mini teams, each of these are assigned an NFL team so that they can get really deep and involved with everything that team represents and their history and culture. usually each team consists of a couple of graphic designers, a product designer, an industrial designer and a fashion designer, it can range from a few to halfa dozen people depending on the scale and scope of the project. 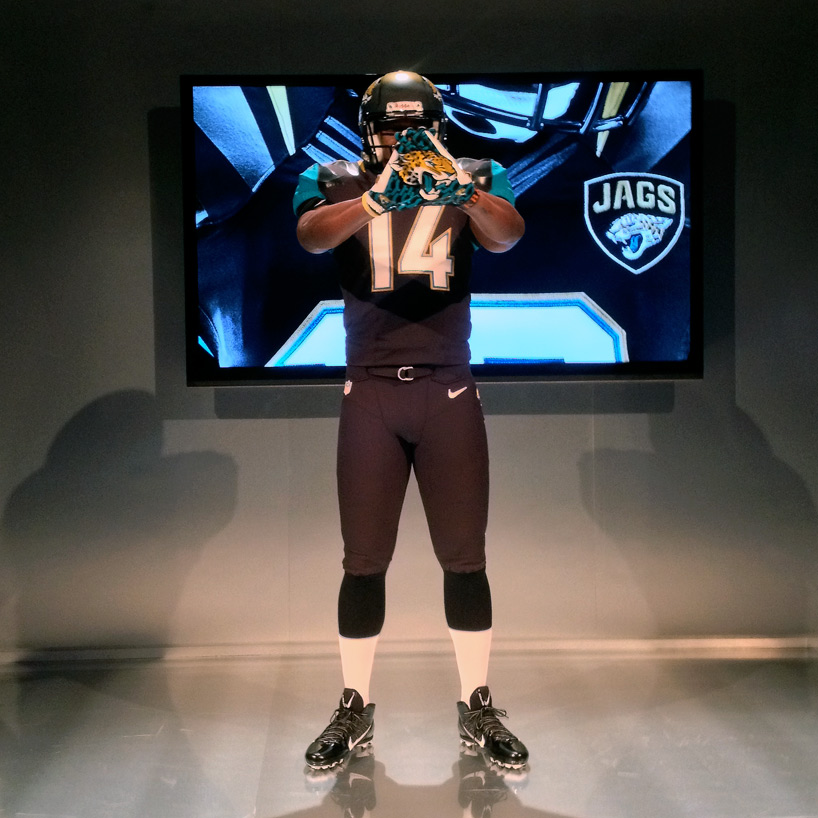 DB: and how do you work with these teams?TVH: I then review the proposals and development of each teams work and direct them and we also receive feedback from the NFL and each team’s owners, the whole process takes eighteen months.

DB: which part of the process do you enjoy most?TVH: when you finally start to see the whole package come together , the ‘total’.with these projects you are combining industrial design, graphic design, fashion, product design, technology, anatomical research and in the end when you see all this hard work come together in the final uniform it feels very rewarding. I also like that a uniform can come to define a an era of the team – since they are used for five years. 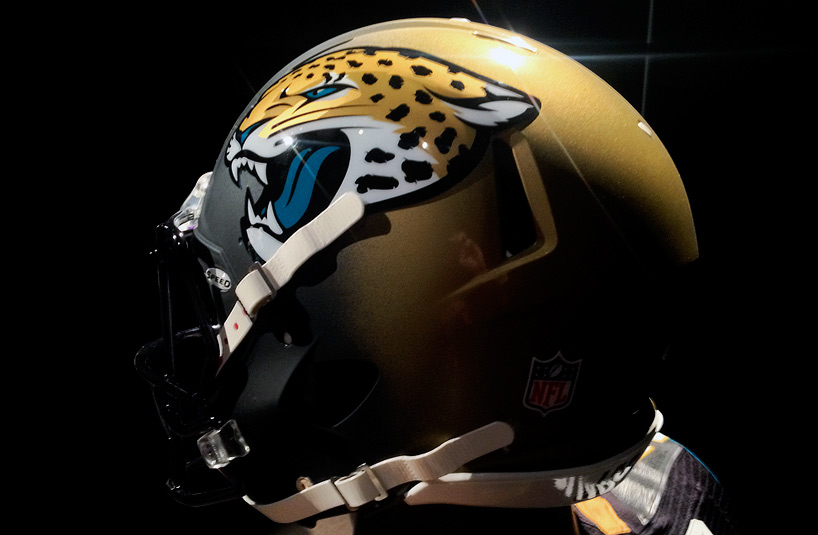 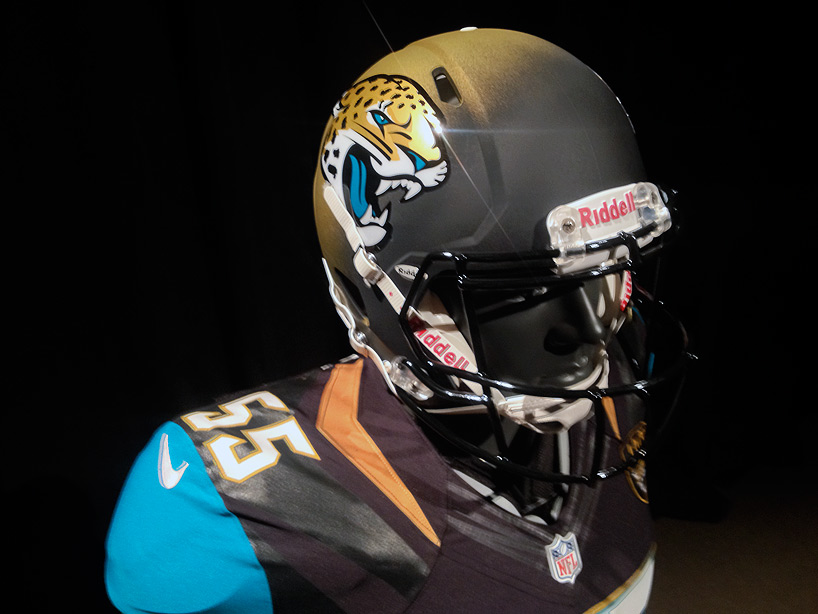 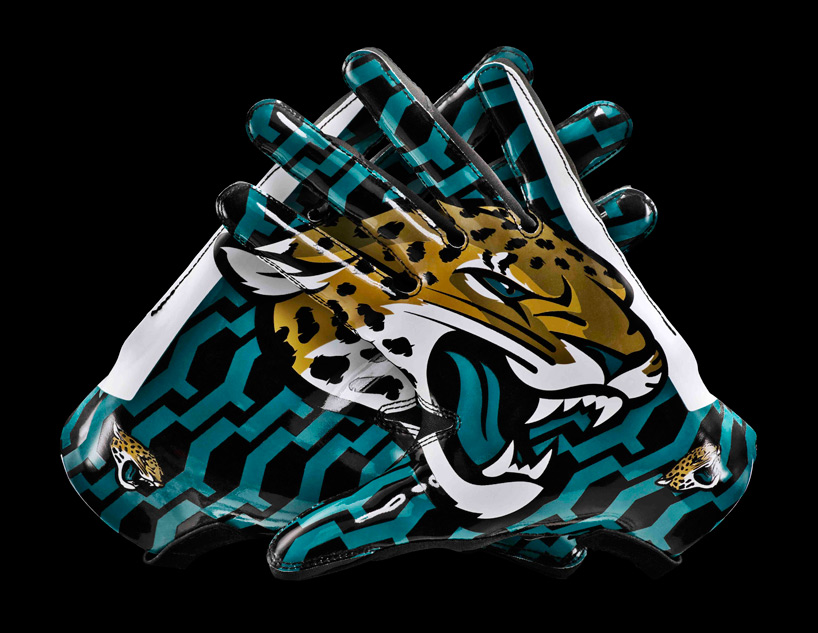 nike vapor jet 2.0 gloves – feature the teams new logo when the hands are locked together 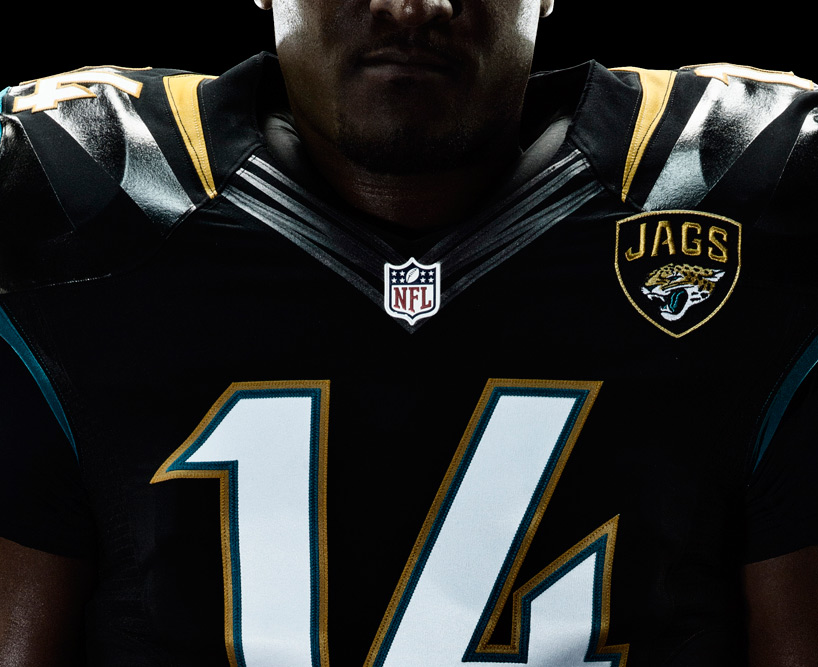 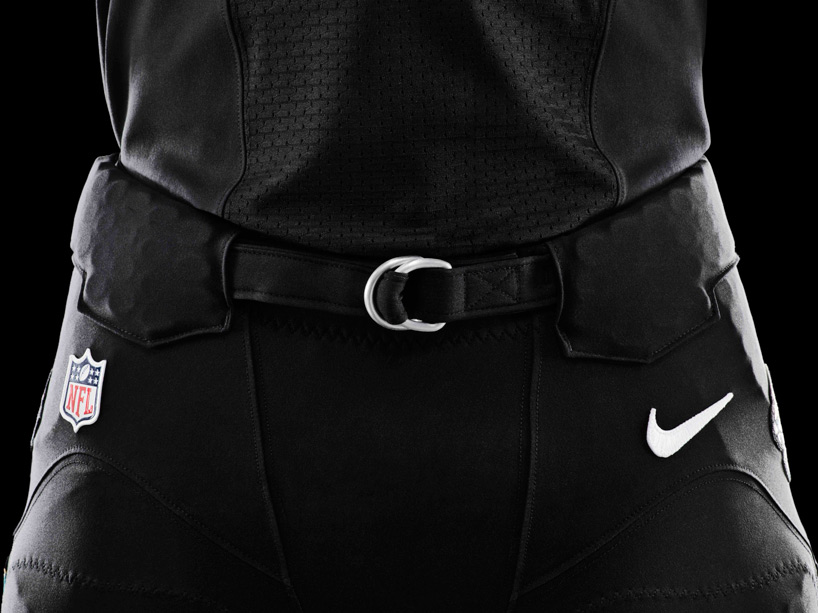 aircraft grade aluminum is used for the new D belt 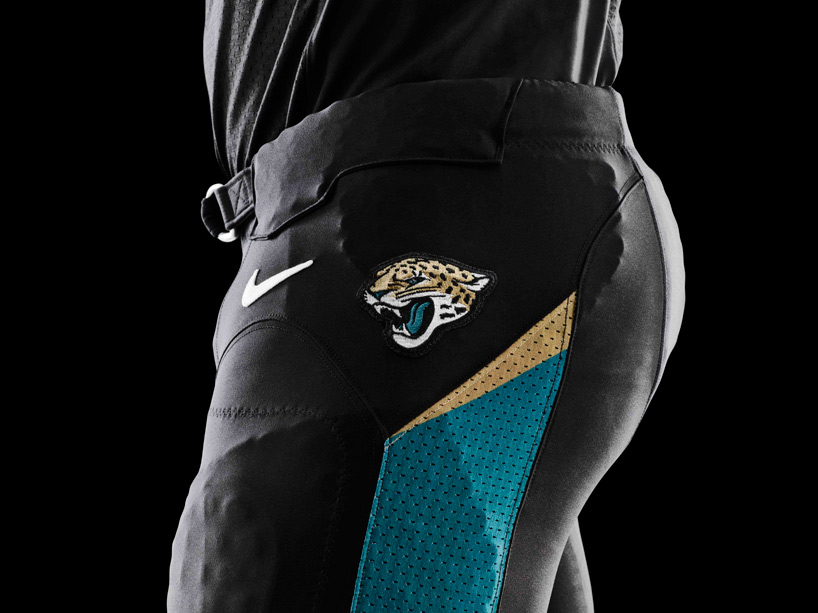 the new logo, teal stripe and gold accent feature on the side of the shorts 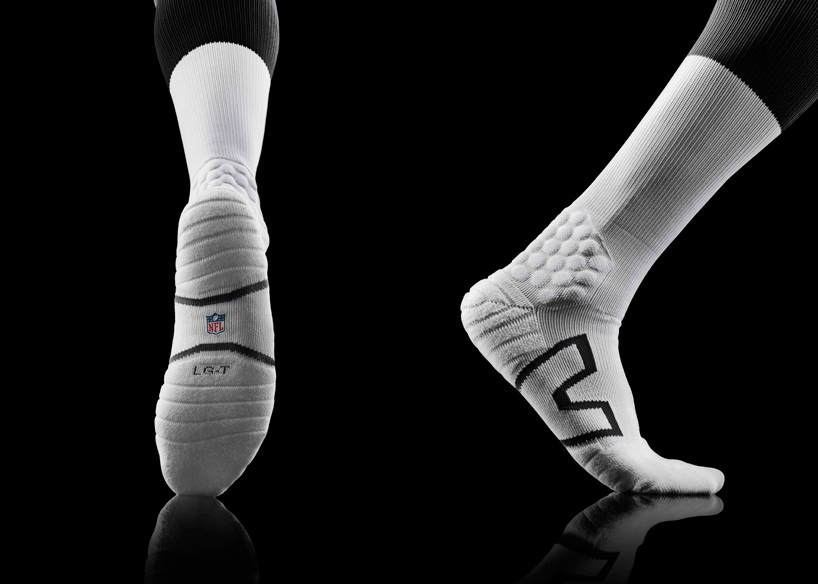 the team will use the latest nike vapor game socks the nike alpha pro cleat is designed for explosive speed with an adaptive nike flywire support structure that creates an anatomical fit resulting in more stability while locking the foot in place. 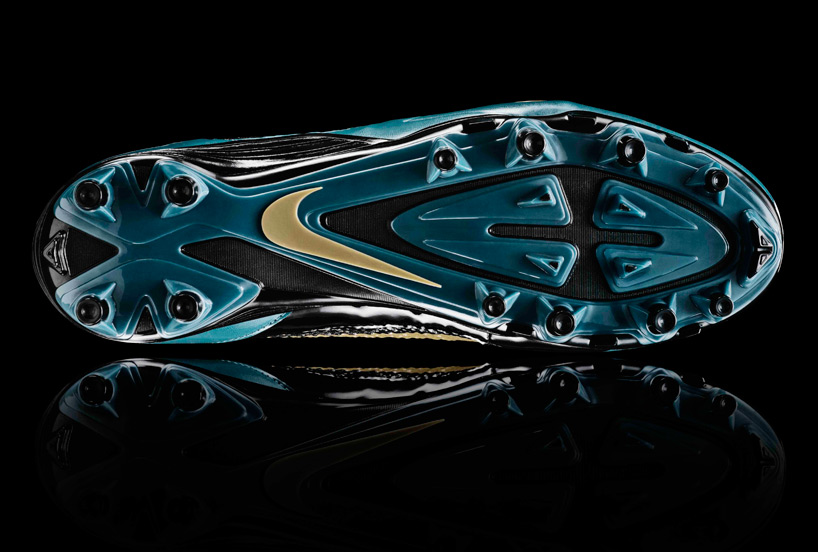 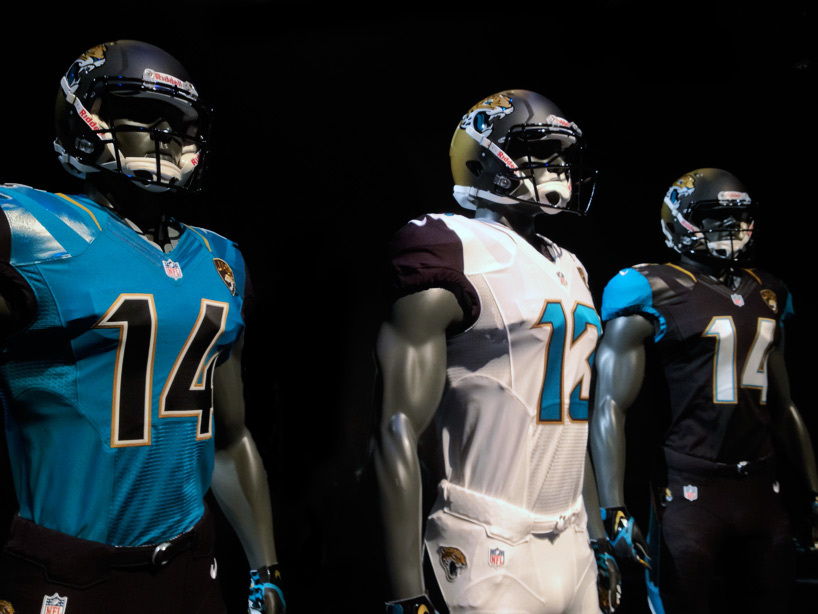 teal and white alternate colorways for away gamesimage © designboom 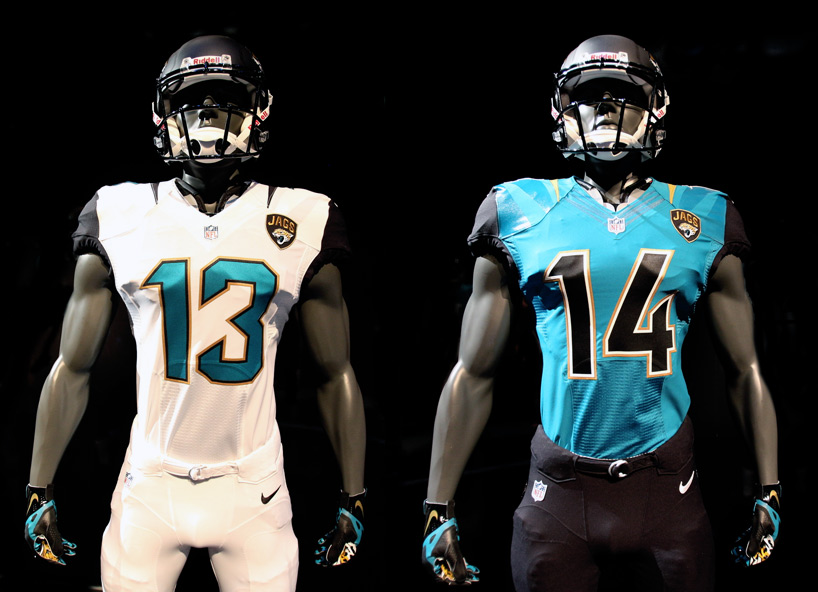 the jaguars new fan jerseys are scheduled to be on sale from april 25th at NIKEstore.com, NFLshop.com and jaguars.com, as well as broader retail locations including NIKE stores from april 26th.