for some time now, we have known that micro-organisms can be used for industrial processes, much like yeast cultures are used for the production of bread, alcohol or cheese. since it is possible to decode the DNA of organisms, even to change them consciously, the so-called ‘white biotechnology’ has transformed fundamentally. now it has become attainable to replace chemicals by organic processes. the evolution has already happened in the textile and detergent industry and shows big potential in the production of energy or plastics. bacterial-cellulose is such a material, which is produced by a bacterium called acetobacter xylinum. within a nutritional liquid, it converts sugar into a cellulose-fibre structure.

posing the question ‘what could future materials and production processes look like?‘, ‘xylinum’ by german designer jannis hülsen is a collaborative research project with german company jenpolymers, by which this technique is further explored through furniture making. 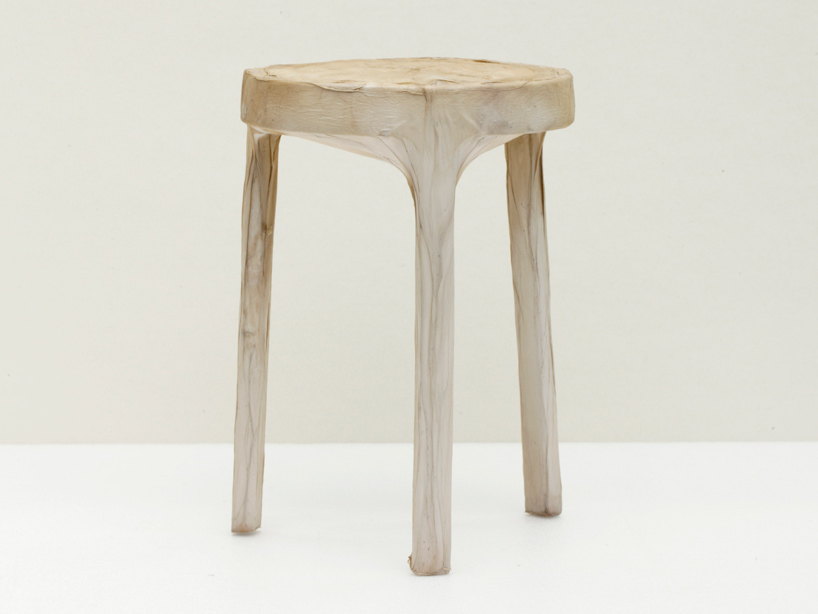 the cellulose-structure forms the skin of the stool

hülsen’s aim was to create a blueprint for new materials and production processes which he has expressed through the ‘xylinum stool’ using the properties of the bacterial cellulose fleece. the substance’s three-dimensional nano grid structure offers optimal mechanical properties, so much so that its stability in wet conditions is even comparable to steel or kevlar. and, if placed inside the human body, it is settled by one’s own cells making it non-allergic and fully recyclable.

the seating object which hülsen has developed meets the characteristics of the raw material. because of its skin-like appearance, the gram-negative bacterium shows similar attributes to that of leather or parchment, which have long been used in furniture production. through research the designer found that the material that exhibited the best qualities for use with the bacteria coating turned out to be wood. with jenypolymers, hülsen created a ‘skin’ using the cellulose — making it possible to shape the material already during the production process inside the liquid — to be stretched around a wooden stool frame, forming the coating and seating surface, by which parchment fills the seating surface, ultimately transforming the frame to into a stool. alder wood was selected for its fine and regular structure and drying properties. 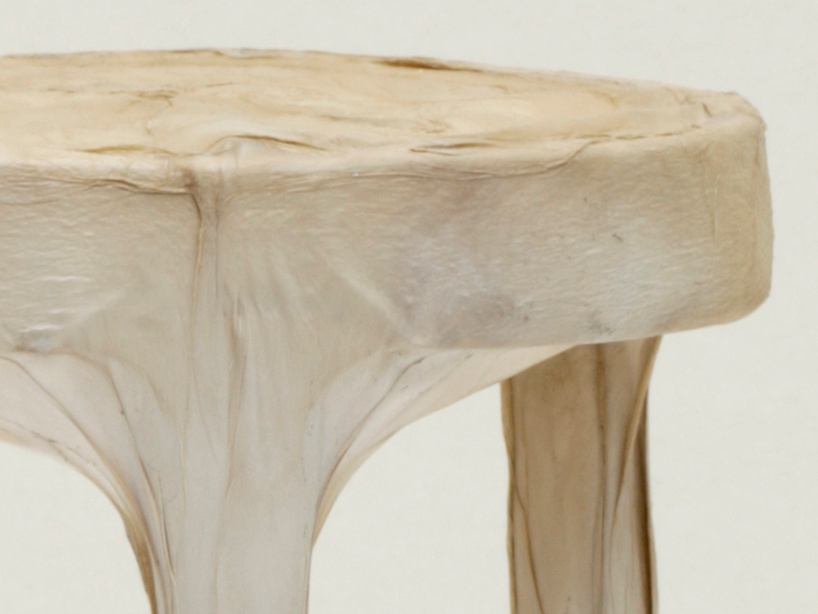 the stool shows an attempt to integrate natural, unpredictable situations which come up during the design process. it allowed hülsen to plan the construction and the material of the piece, but neither to predict its final shape after the drying process, or the eventual appearance of the cellulose. acetobacter xylinum is part of a new generation of materials, highly specialized, sustainable to produce and 100% biodegradable. 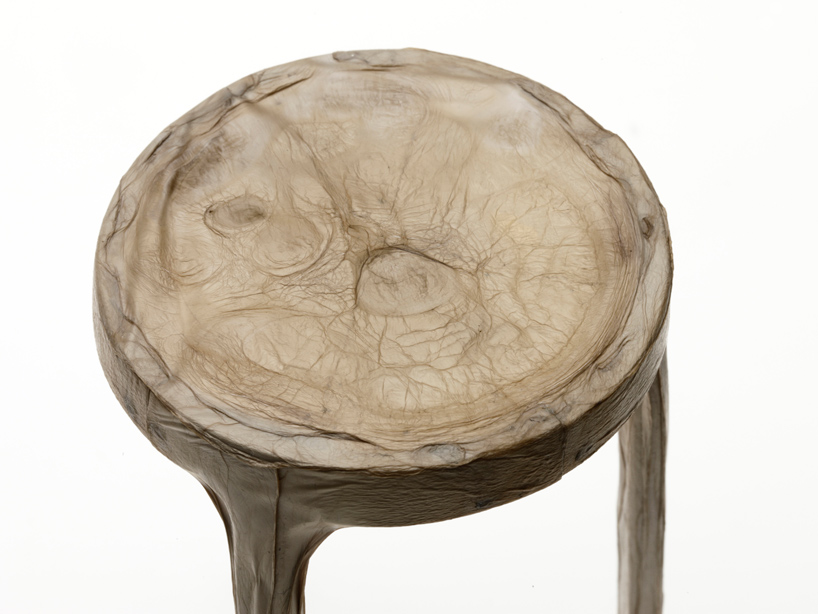 evolution of the material from being placed within a nutritional liquid, converting sugar into a cellulose-fibre structure 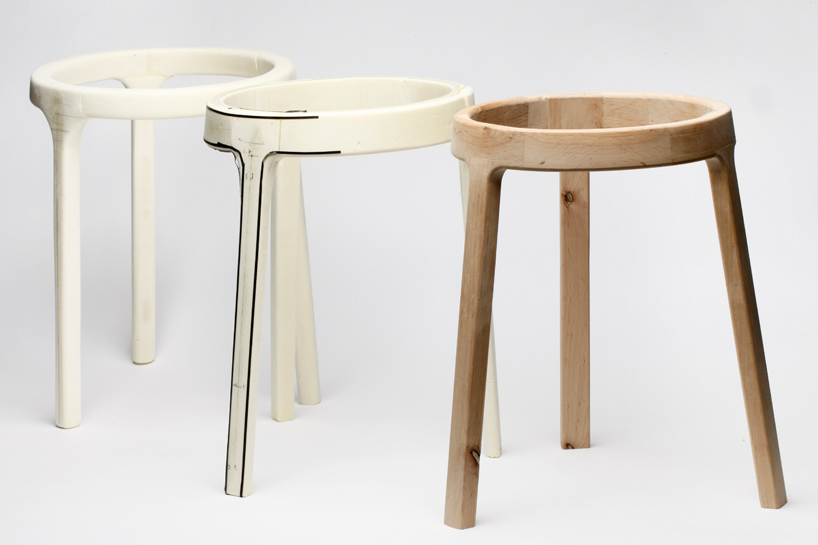 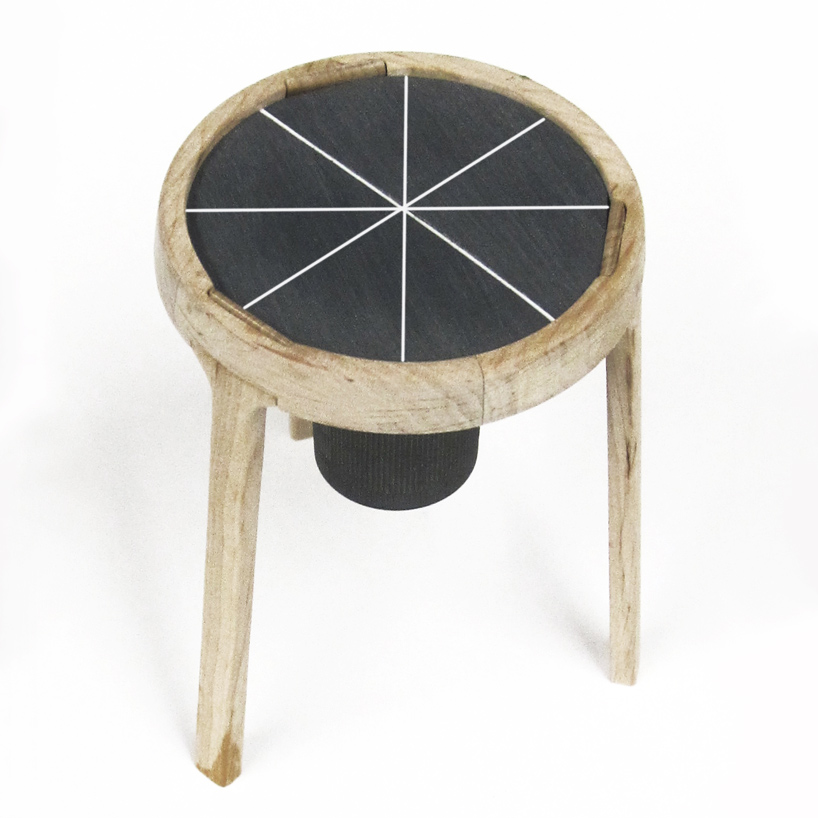