at prague city gallery — inside the troja château venue and on the grounds of this magnificent baroque monument — jiří příhoda presents a solo exhibition of sculptural installations, including both early pieces and recent works. straddling the line between object, art and architecture, these monumental, immersive forms act as contemplation chambers, futuristic dwellings, spaces for meditation, and sanctuaries within nature. while many of the pieces have been previously conceived for galleries and design fairs, příhoda has reinterpreted them directly for the context of this space, particularly to interact with the stunning baroque frescoes that feature throughout. 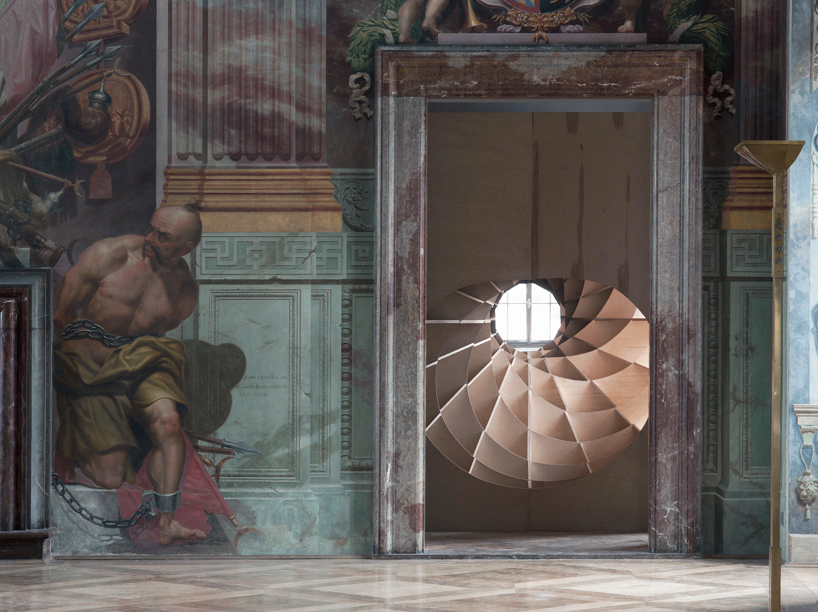 inside troja château, příhoda has installed ‘helix’ as a giant kaleidoscope through which visitors can see baroque wall paintings on the other side. made from plywood, the title references the negative shape formed by this baroque-era architectural element, and generates unexpected configurations and perspectives for the visitor to experience. 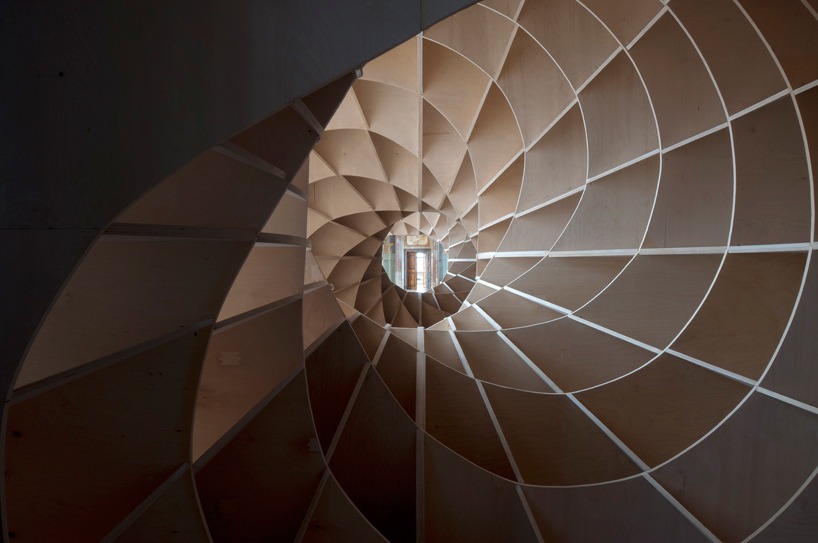 ‘c-ARK’ is a shell like architectural object sited on the grounds of troja château. inside, visitors experience a copied fragment of fresco painting sourced from the imperial hall ceiling, which depicts a motif of the holy trinity. installed in the central horizontal axis of the ark, viewers can nearly touch the large painting as it is suspended above their heads. 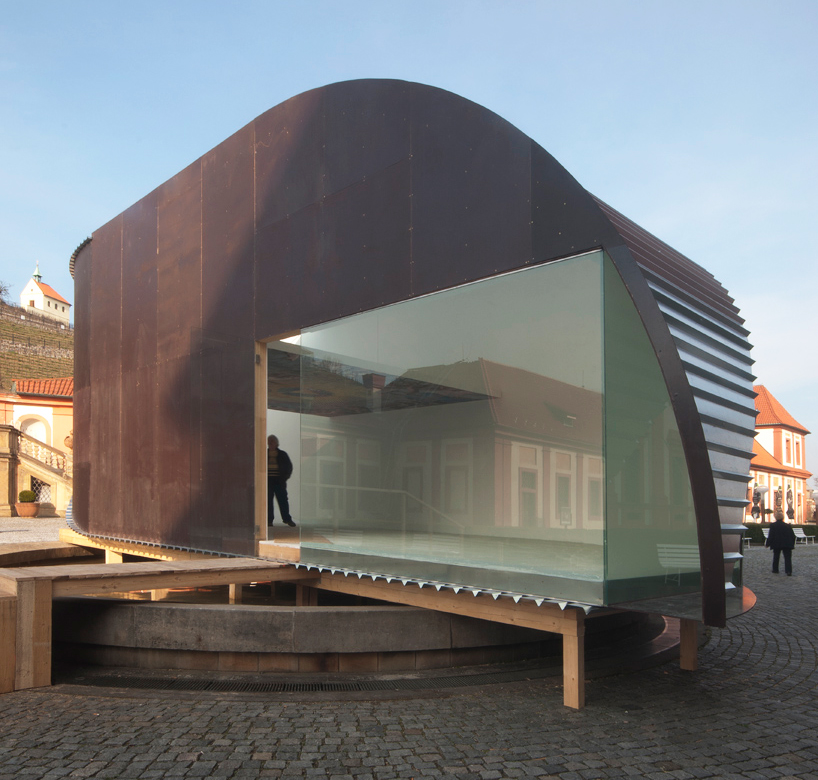 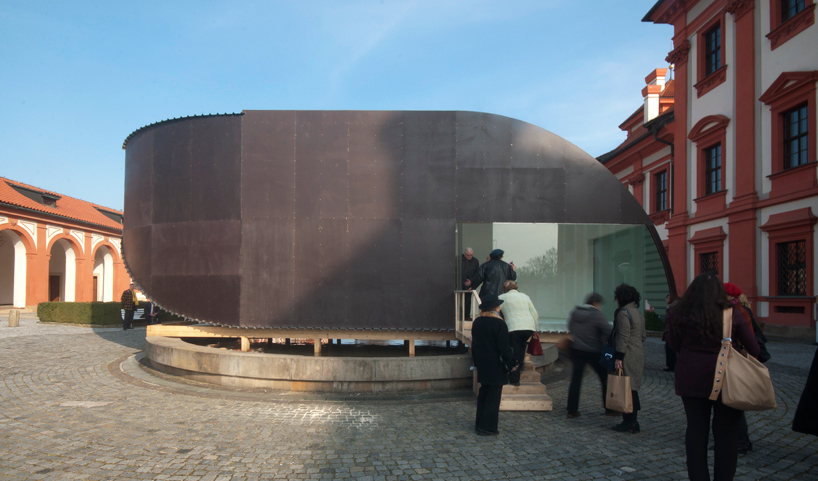 visitors enter ‘c-ARK’, an immersive architectural object sited on the grounds of the baroque landmark 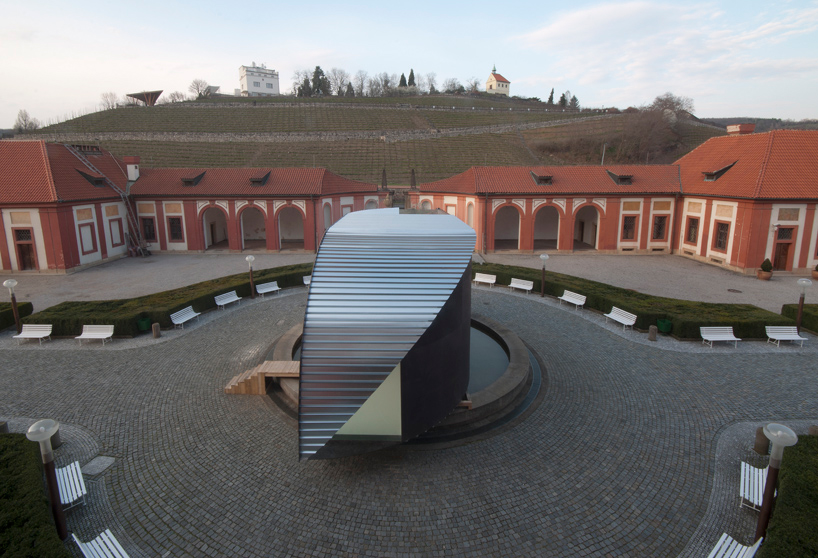 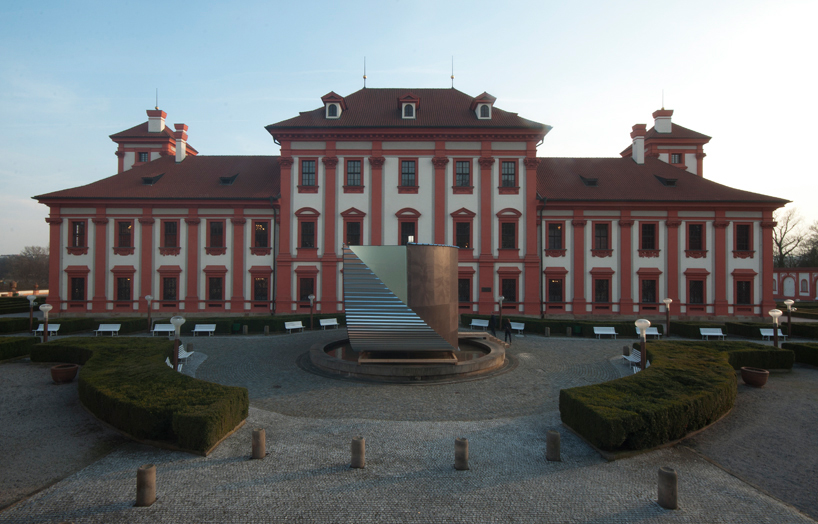 the installation is removable, and will be relocated following the duration of the exhibition 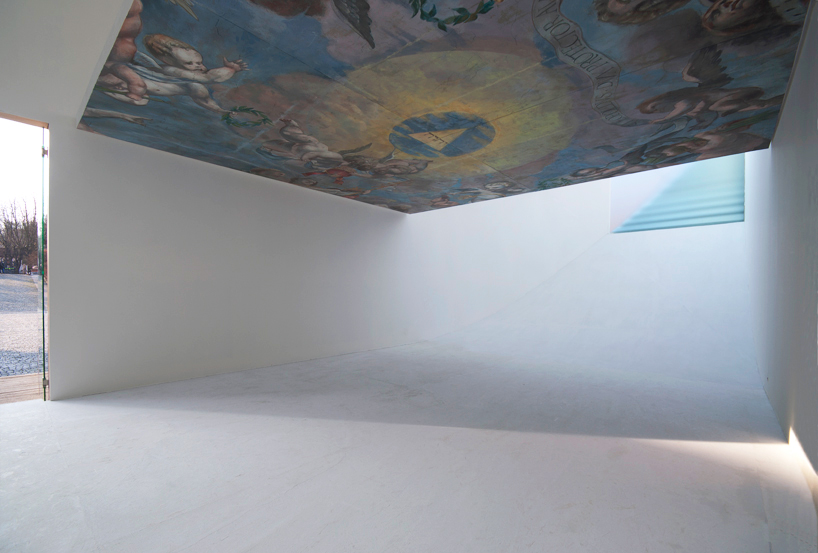 inside ‘c-ARK ‘, a fragment of a fresco is installed at the ceiling, depicting a motif of the holy trinity 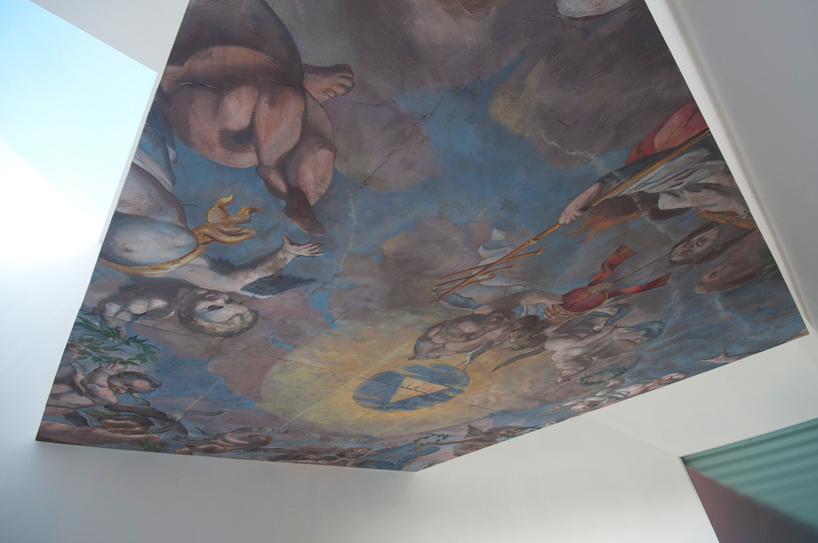 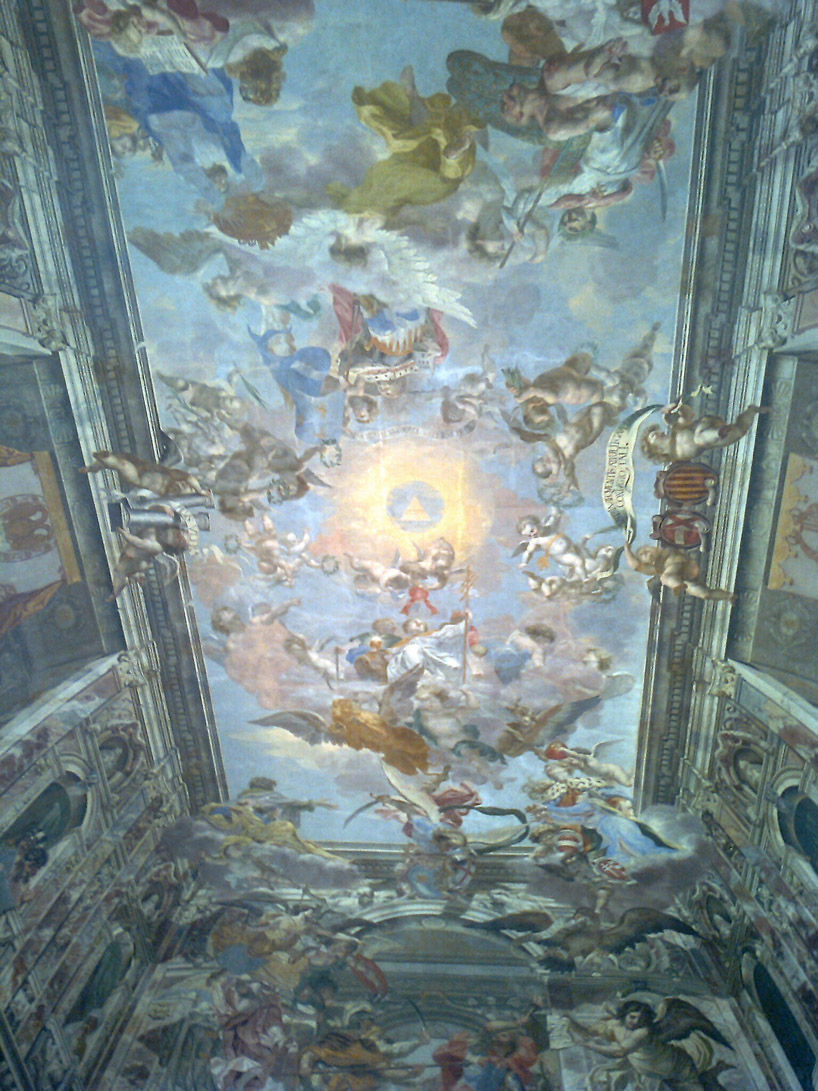 ‘mPod’ — previously featured by designboom for designblok 2015 — is conceived as a large scale martian dwelling. the primary element of the structure is an inner spiral, which ends in front of a digital video projection of the surface of mars. the futuristic dwelling realizes příhoda’s interest in taking part in a future mission to the red planet. 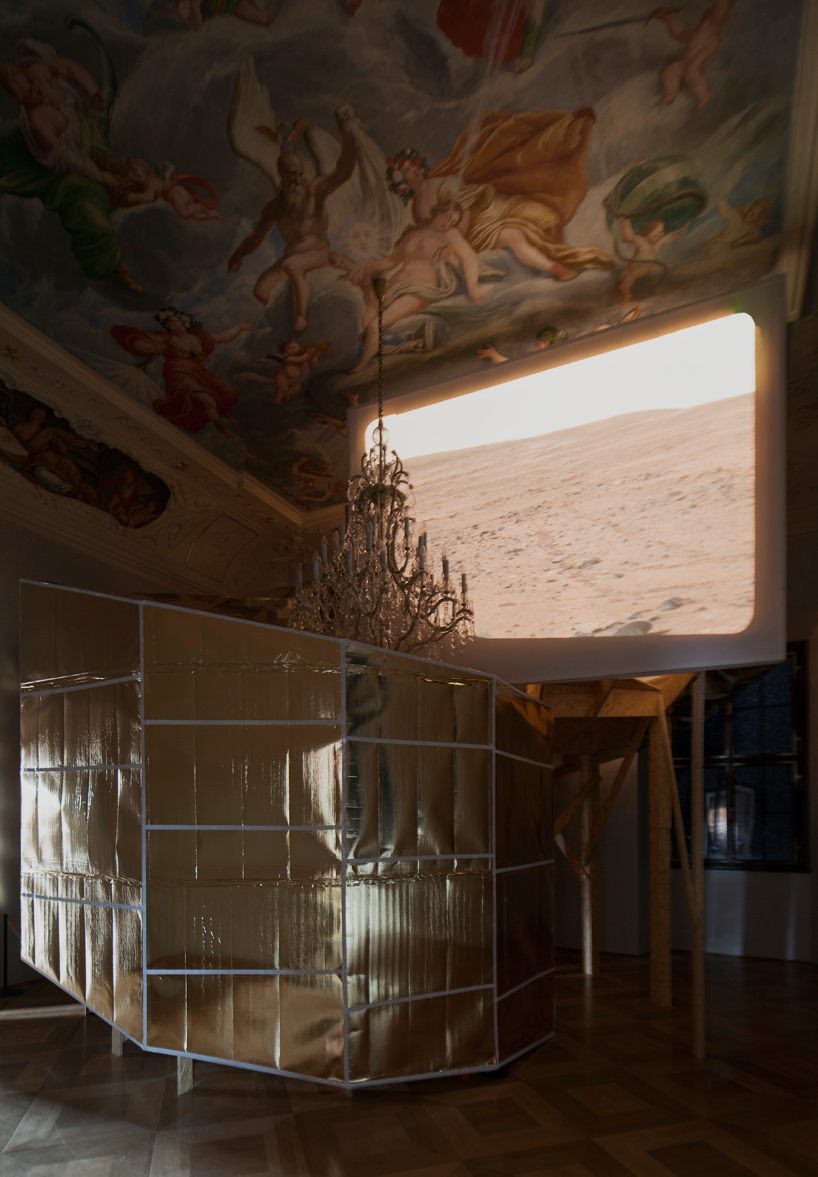 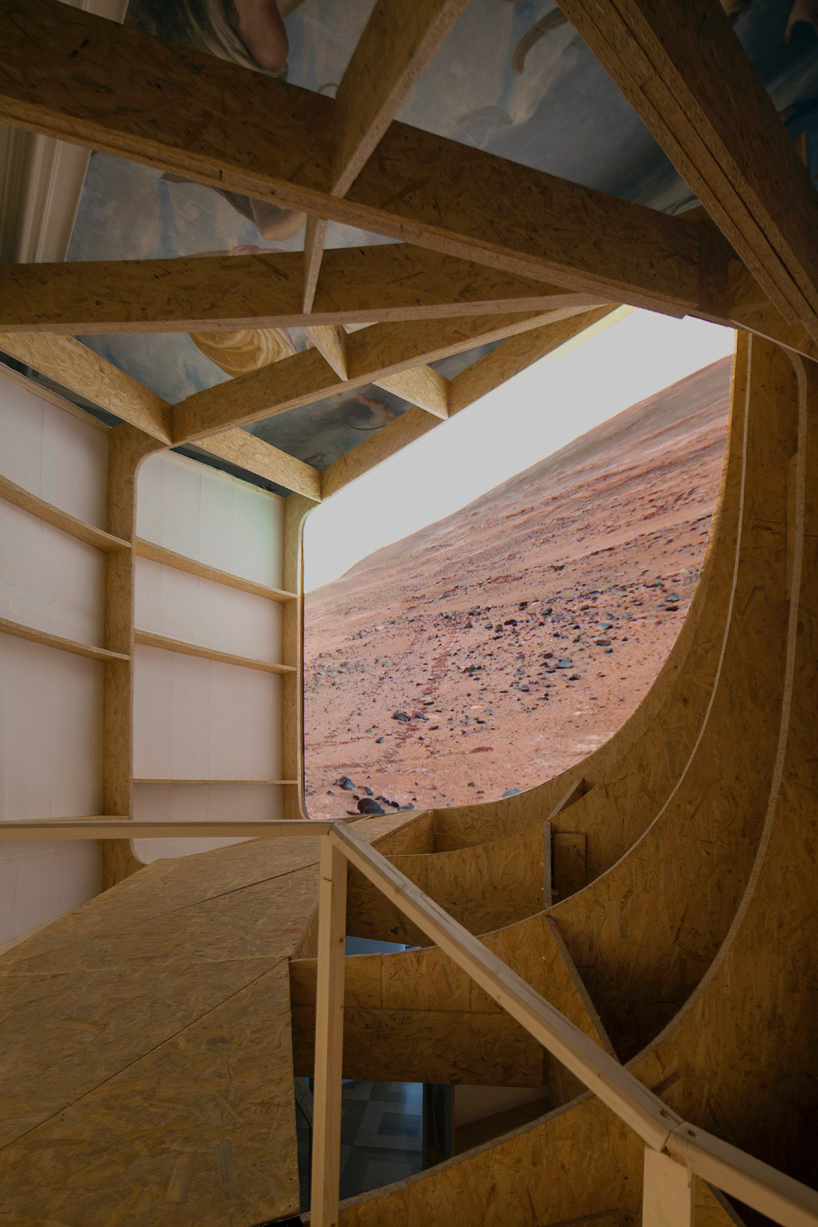 the installation ‘interstellar’ comprises a fresco painting of a scene from the film of the same name, placed into a half cylinder-shaped architectural object. the artwork — completed by movie set painters jiří čihák and pavel šmíd — depicts the instance where future life is organized inside empty tubular-shaped objects that orbit saturn. ‘interstellar’ directly responds to the architecture of the site and draws from the baroque elements that appear throughout. 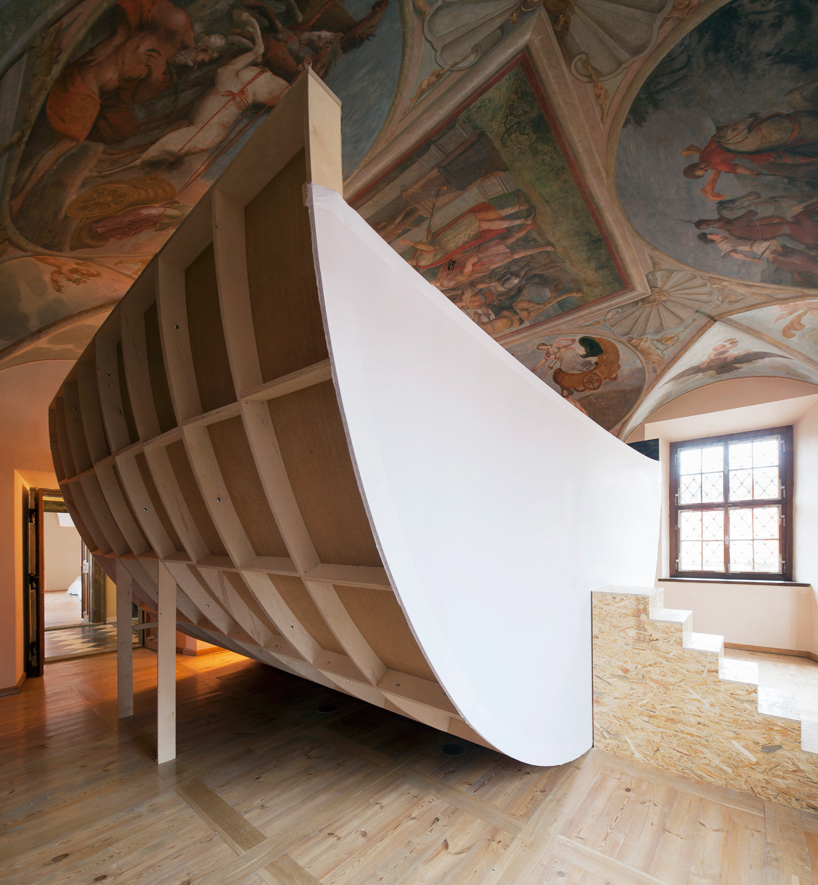 installation view of ‘interstellar’, which draws from the artistic context of the building 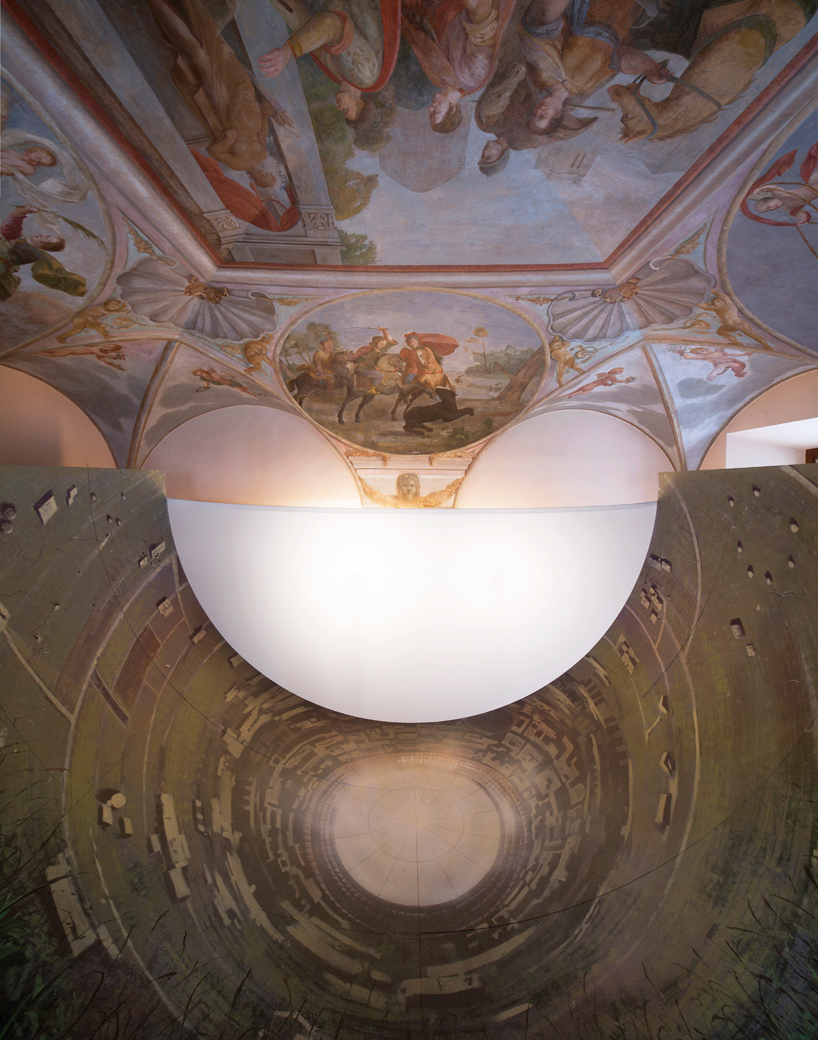 inside the structure, a fresco has been painted by movie set artists of a scene from the movie ‘interstellar’

for ‘event II’, příhoda virtually transports viewers into the system of an inverted surface, offering onlookers the possibility to enter its interior. the organically-shaped object made from metal and wood is seemingly a machine from the future, rather than aspiring to merely present a model of mathematical inversion. 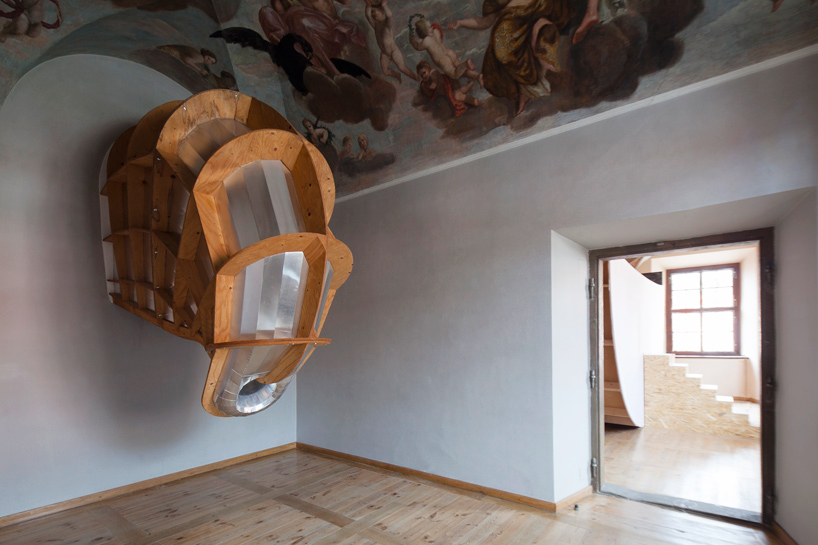 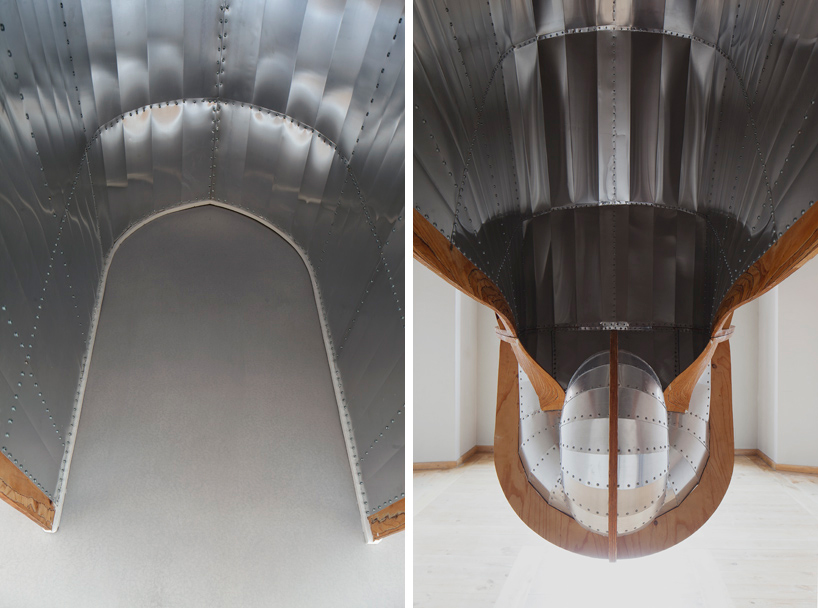 ‘event II’ offers visitors the possibility to enter its interior

příhoda’s ongoing interest in nature was reignited during a scholarship visit to france, where he focused on the study of the life of whales. the installation ‘188dB kHz’ presents a stylized interpretation of life-sized sperm whales and minke whale fragments. its name references the frequencies and decibels measured by scientists while monitoring conversation between the mammals. 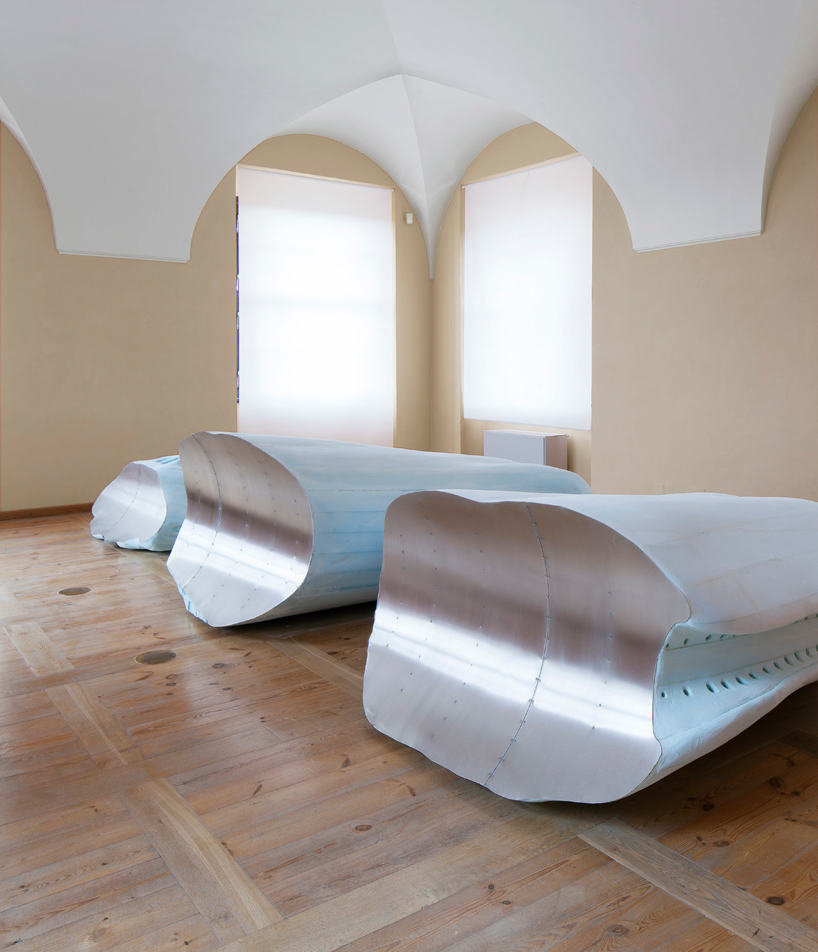 when příhoda was denied a permit to study the gargoyles at the top of new york’s chrysler building in 1993, he eventually examined them in detail through archival materials. he then interpreted them on a 1:1 scale in plywood and chipboard coated with a lead sheet. 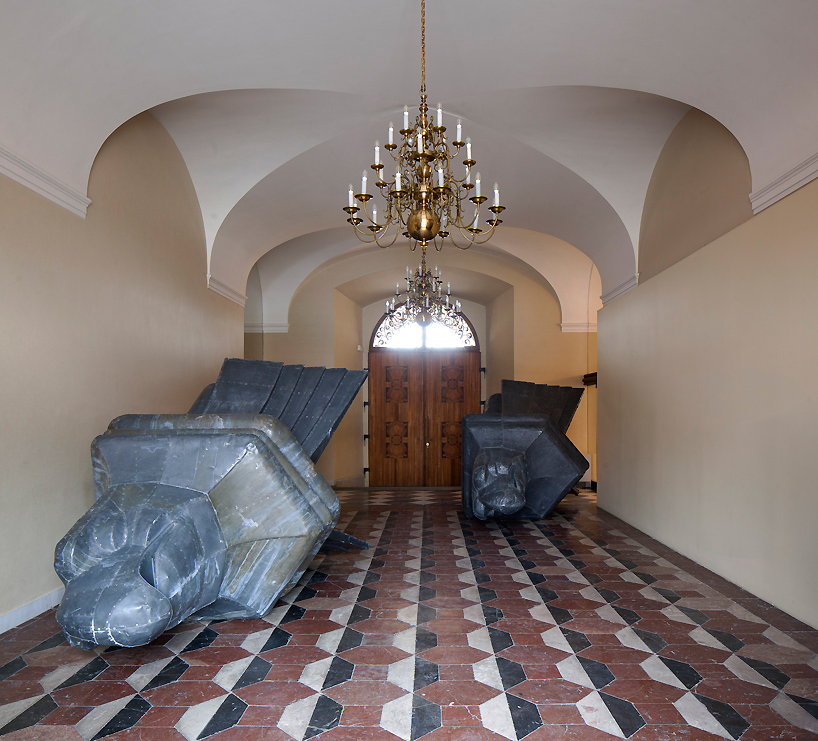