a report in early august 2018 by carbon brief, a UK-based website covering the latest developments in climate science, climate policy and energy policy, estimated that ‘2018 is most likely to be the fourth warmest on record for the earth’s surface,‘ with the possibility of 2018 being ‘as high as the second warmest.‘ one effect of such high temperatures is a melting ice cap, that carbon brief noted in the same report as ‘at record or near-record lows in the arctic for much of the year.‘ 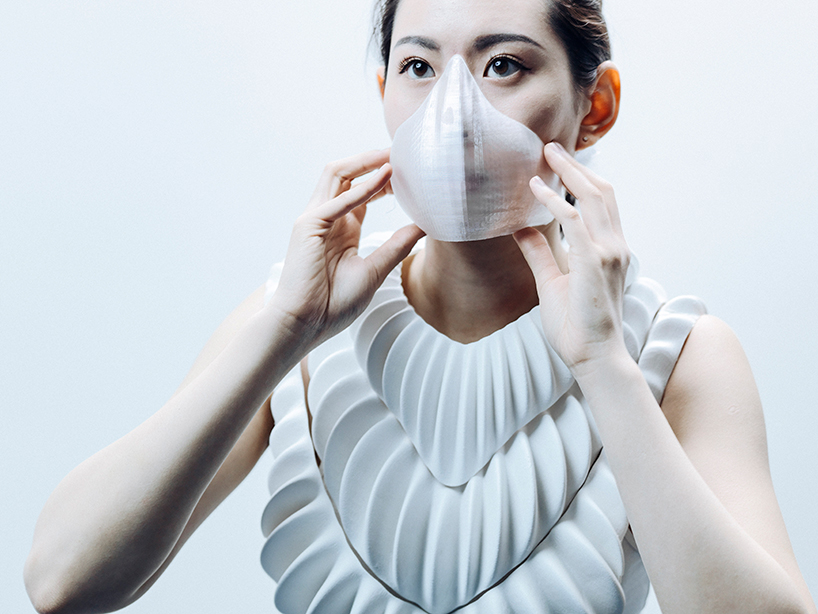 one effect of warmer temperatures and a melting ice cap is the result of a rising sea levels that has the potential to drastically change how our cities function, and our everyday livelihood. furthermore, in february 2018, a study conducted by nasa revealed that, ‘the rate of global sea level rise has been accelerating in recent decades.‘ thus the issue of a fading shoreline, rising water levels and the potential of future submerged megacities in the costal areas has pushed material scientist jun kamei to search for ways humans can adapt to a dystopian future. 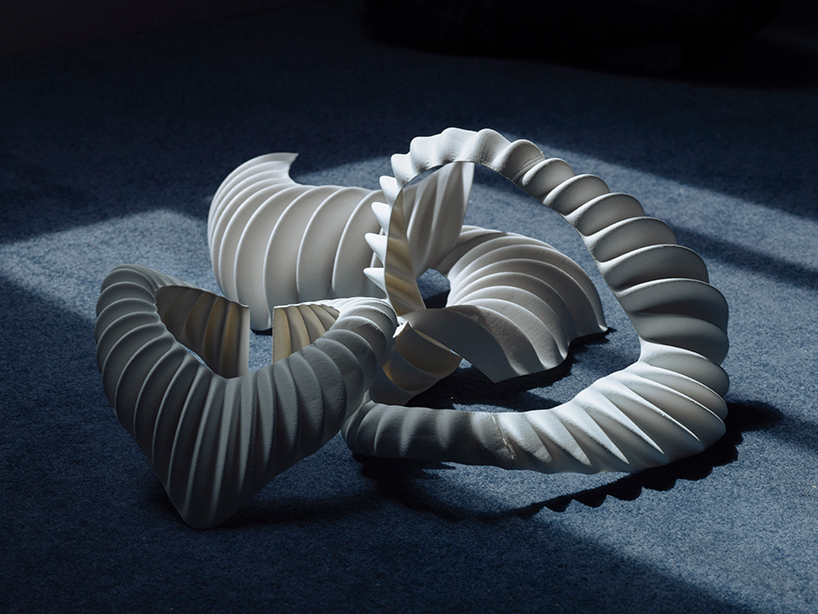 kamei also designed the garments which are on the model’s body, they take the look of gils and coral

one resource of inspiration that mr. kamei used to develop a technology that could present an opportunity for humans to adapt is biomiciry. specifically, when asked by designboom, mr. kamei informed us that when contemplating the possibility of a technology for under water breathing, he looked to the insect, ‘the backswimmer or notonecta triguttata.‘ 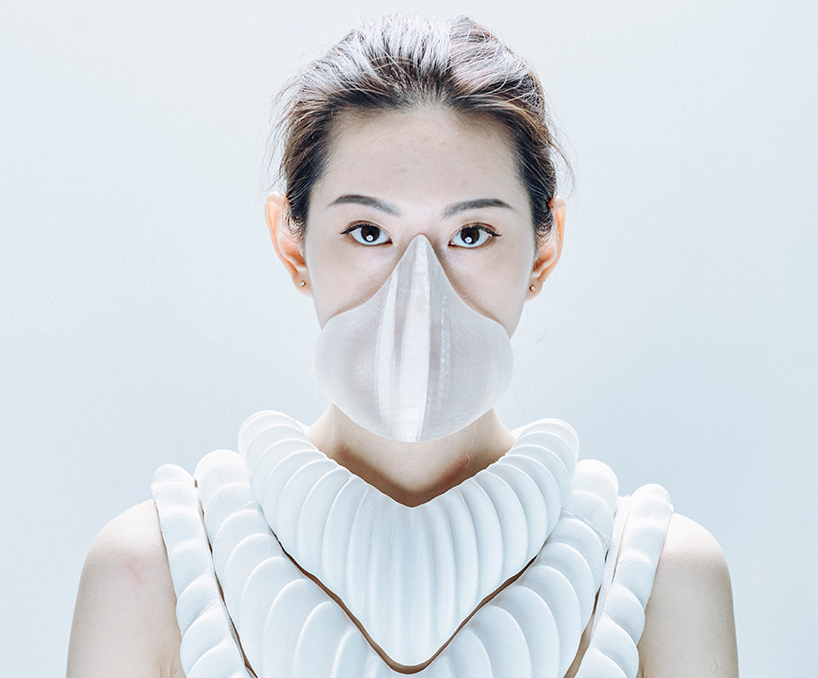 here, the garments and gill mask are seen clearly and are clearly designed with inspiration from aquatic life

at the royal college of art, in collaboration with the rca-iis tokyo design lab, mr. kamei developed amphibio: a 3D-printed amphibious garment which functions as a gill. the amphibio uses a porous hydrophobic material that allows for underwater breathing by replenishing oxygen from the surrounding water and dissipating the excess carbon dioxide which one breathes out, and accumulates in the system. according to mr kamei, ‘the design form of amphibio garment and mask was inspired by [a variety of] different shapes found in [aquatic life] which would have a high surface area, such as gills of fish and certain type of corals with folded shapes.‘

this gif illustrates the ‘flexibility’ of the gill displays when o2 enters the mask
photos of the working prototype of the gill garment by: jun kamei

when asked by designboom about the technical side of how the gill works, mr. kamei explained the following:

jun kamei (jk): ‘the transfer of the gas, [02 and co2], across the [hydrophobic] membrane is based on physics of diffusion. the mask (semi translucent) is connected to the gills (in white) by some tubings, thus whenever we breath, we breath the air contained in the gill, consuming the oxygen and exhaling carbon dioxide. the water around [the mask] contains oxygen which is dissolved. normally, the partial pressure of the oxygen dissolved in the water and that of the oxygen in the gill is the same, however, as the oxygen is consumed during our respiration, the partial pressure of oxygen become lower than that of the dissolved oxygen outside of the gill. as the membrane of the gill let gas go through but not water, oxygen molecules travel from the surrounding water into the gill to negate the difference in the partial pressure of oxygen across the membrane.‘ 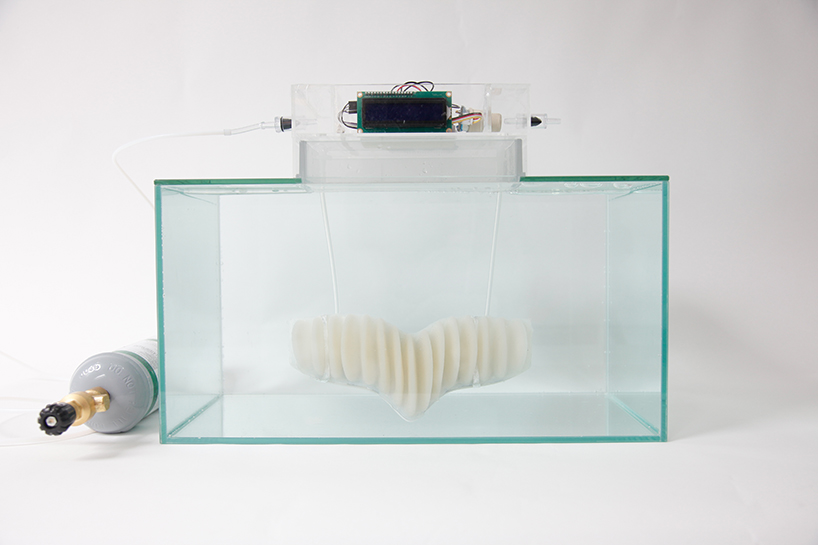 during the test of the prototype, the oxygen in the mask is replaced by co2 to test the performance 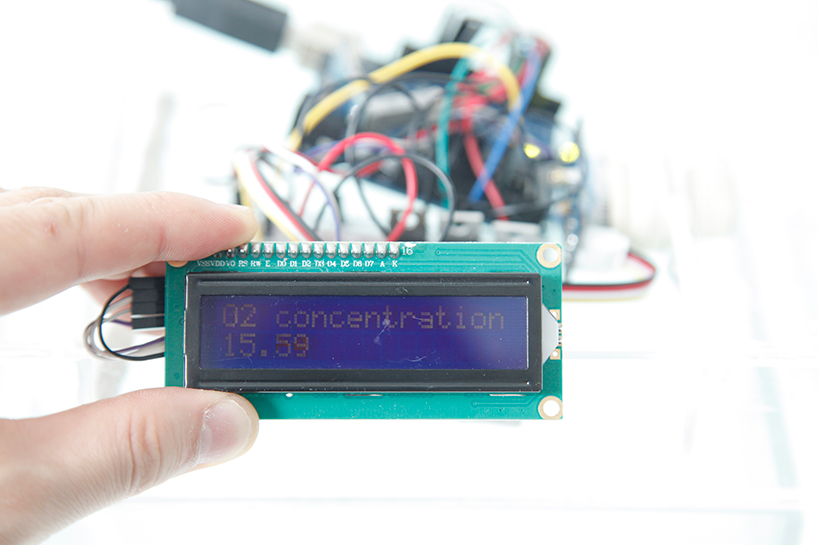 the sensor is placed to measure the oxygen replenishing of the gill, the 15.59 concentration proves functionality

mr. kamei plans on moving the next phase of amphibio to support underwater breathing at human scale, ‘where a gill with at least 32 m2 would be required to support our oxygen consumption in water.‘ additionally, mr. kamei told designboom that amphibio could solve the issue found in scuba diving where the deeper one dives, the thinner the air becomes thus decreasing the amount of time one can spend in the water by ‘combining [the mask] with a compressor, which would compressed the air in shallow water, and release it in deeper water to compensate the decrease in gas volume.‘

for a full video of jun kamei’s AMPHIBIO project, see the video below: 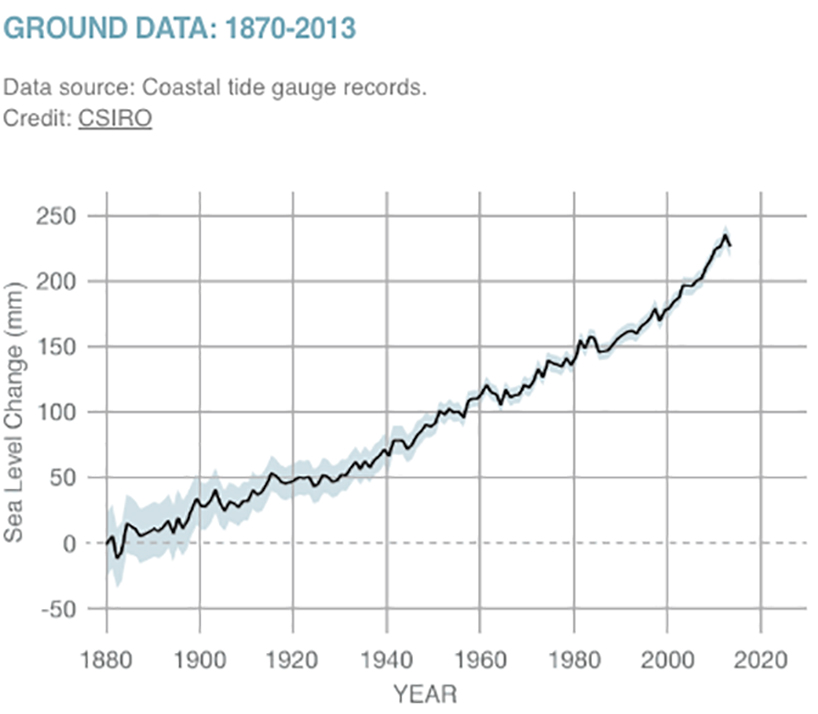 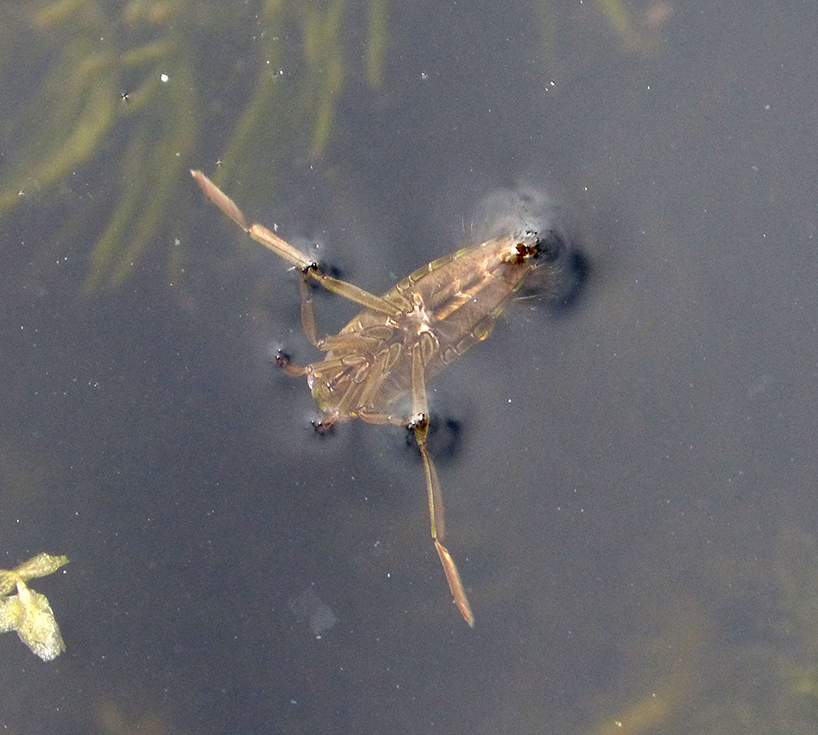 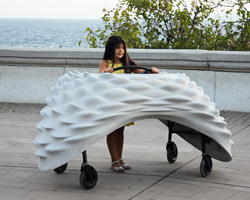 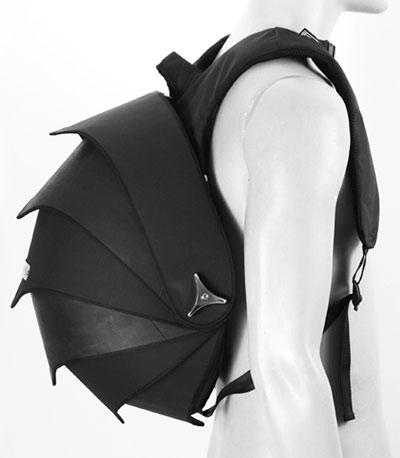 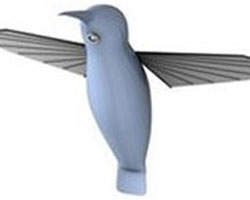 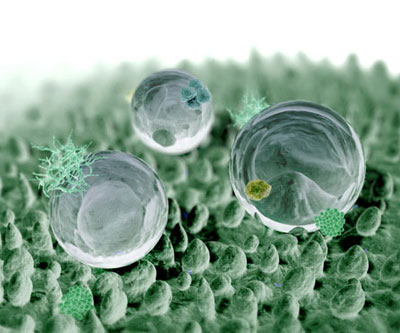 Jan 19, 2009
biomimicry 'nature has all the answers' congress at materia inspiration centre, netherlands