since 2007, the london design festival has been presenting the landmark projects, a major feature of the annual week long event. the programme brings forth a series of ambitious installations conceived by selected international designers and architects, placed at some of the city’s prominent and most-loved spaces. this year includes ‘you know, you cannot see yourself so well as by reflection’ by mexican architect frida escobedo and ‘curiosity cloud’ by mischer’traxler, among others; as well as a special installation by kim thomé realized in collaboration with swarovski that is set to take over the central space of the V&A — occupying the high atrium, rising from the grand entrance up towards the contemporary ceramics gallery.

kim thomé manual demonstrates how ‘zotem’ will come to life
thomé’s ‘zotem’ is a 18-meter tall, double-sided monolith which has more than 600 bespoke swarovski crystals embedded within it. these are arranged in a grid pattern within a frame of matte black aluminium, projecting a colorful blend of light and movement that draws one’s eye upwards. the work creates a visual link between the ground and the sixth floor exhibition spaces, encouraging visitors to explore the historic venue’s interior architecture from a different perspective. the gargantuan height of the installation reminds one of a ‘totem’; while the looping mechanism that sends a roll of prismatic colors and linear patterns rising and falling through the floors, reflected and refracted by swarovski crystal as light shines through it, is reminiscent of a ‘zoetrope’ — a 19th-century animation device that pre-dates film and gives the illusion of motion through a sequence of isolated drawings that appear to move as they flick past the eye in quick succession. hence the name ‘zotem’, blending the sounds and meanings of these two words.

designboom interviewed kim thomé in advance of the unveiling of his landmark project to hear his thoughts on the development of ‘zotem’, working with swarovski, and how he feels about exhibiting within such a prestigious venue.

animation of how the color and crystals will create a dynamic, continuously moving visual
designboom: what was your design approach in conceiving ‘zotem’?

kim thomé: I started very simply by experimenting with stock swarovski crystals and explored ways in which I could control how they behaved in certain situations. from there I went on to designing a platform for which the experiments could live.

DB: what is the effect you wanted to create with this large-scale installation?
KT: working on such a large scale is challenging but also very rewarding. I wanted to create an experience for the visitor, to explore the space but also engage with swarovski crystal in a fascinating and different way. the important thing we had to get right was the scaling up of the concept so that the resolution of the moving ‘graphics’ worked from many different viewpoints in the museum. 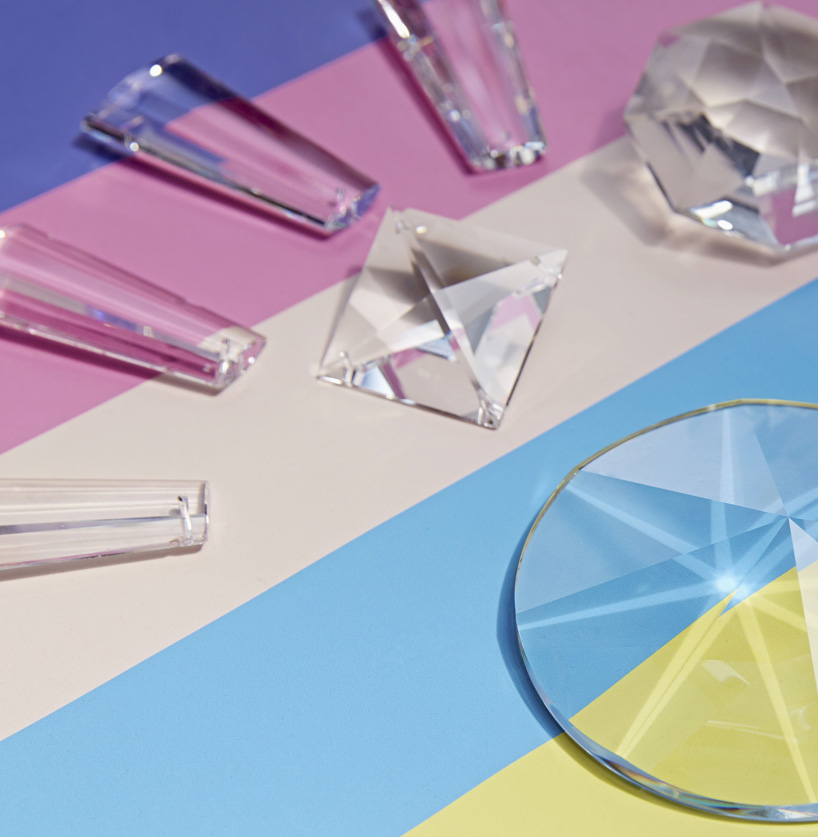 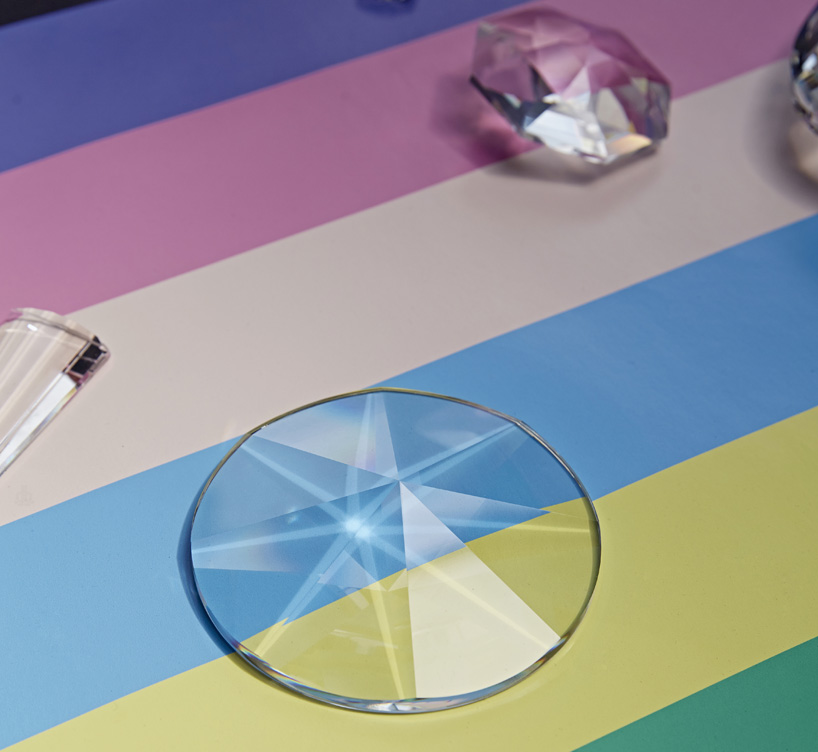 the installation uses stock crystals that have been made 2.2 times larger than their normal size
image by mark cocksedge
DB: the V&A is a very prestigious venue, how does it feel to be exhibiting within this space, and how much of its rich history influenced the design of ‘zotem’?
KT: I am absolutely thrilled to be showing my work at the V&A — an opportunity like this doesn’t come along too often. the installation is site specific to the grand entrance — it really needed to fill the space in an impactful way and also serve a function: linking the spaces it inhibits — from the grand entrance upwards to the contemporary ceramics gallery on the sixth floor. the monolithic form itself is directly influenced by the grandness of the architecture in the museum, but I really like how the piece, looks very modern in contrast to the historic surroundings.

the norwegian-born creative elaborates on the design and how the site informed the scheme for ‘zotem’:
I guess the grandness of the space obviously needed something large to have an impact, but it was important for me to use the space and the experience of the space that’s there already. when I first asked about the space that we would be using, I went up to the top on the ceramics floor. I had always found it quite hard to get up there even though it’s one of my favourite places in the V&A. for me, it was important that the motions of the crystal patterns actually lead your eye upwards. we thought ‘let’s have a little cherry on top’, which is placed in the ceramics space. it’s actually the deviation from the standard pattern that leads you up to the top. it’s like an explosion of colour when it fans out. it’s going to be very interesting to bring people up to a space that they haven’t seen before, all because they would like to see the top end of the of this structure. it’s not a directly interactive piece, but it is designed to help people explore the building as well as the crystals. 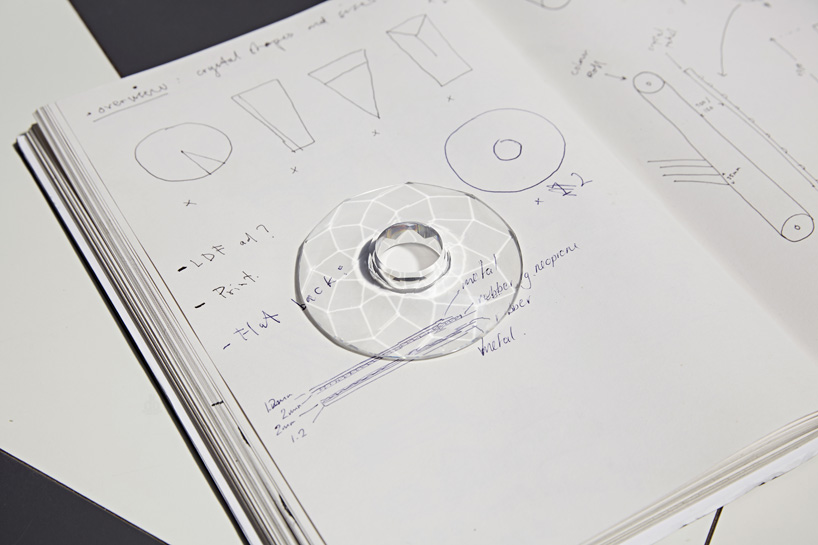 detail of one of the crystal shapes
image by mark cocksedge 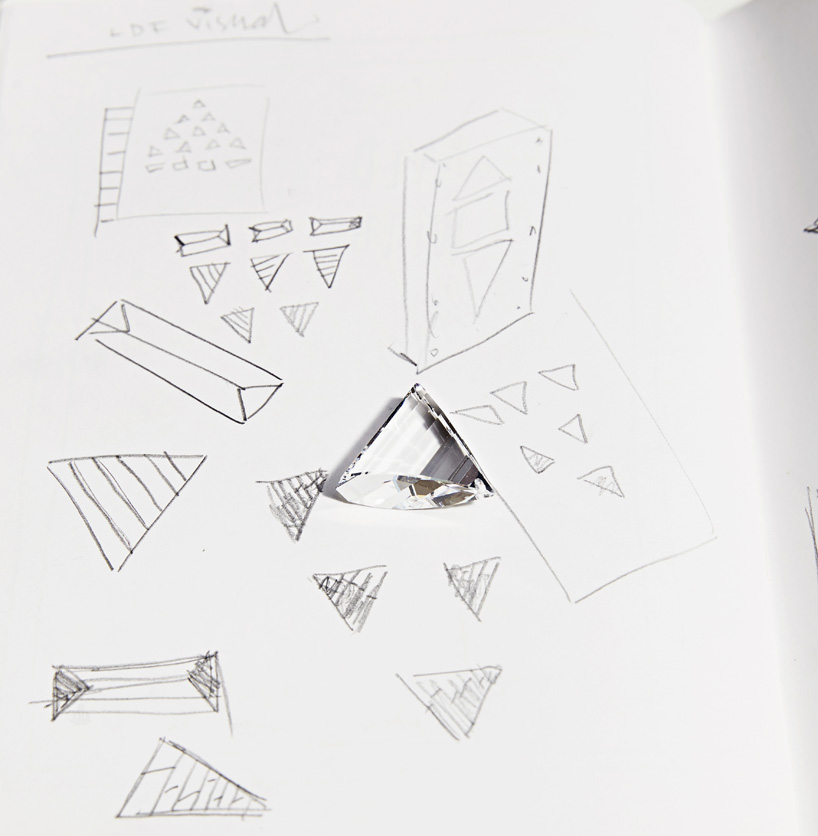 sketching out the geometric patterns
image by mark cocksedge

DB: what are you currently fascinated by, and how is this feeding your artistic practice?

KT: I have been fascinated by chromatography lately and trying to feed it into some future projects. I do love exploring a process especially one where there is part control part random result.

as well has his particular interest in colour, ‘zotem’ also displays the london-based designer’s fascination with linear patterns: ‘I found I was interested in using prismatic colours, all the colours of the rainbow, and I just wanted to put the colours back into the crystals if that makes sense. so the reflection that you get, the rainbow refraction that you get from a chandelier, is basically being put back into the piece,’ he says. 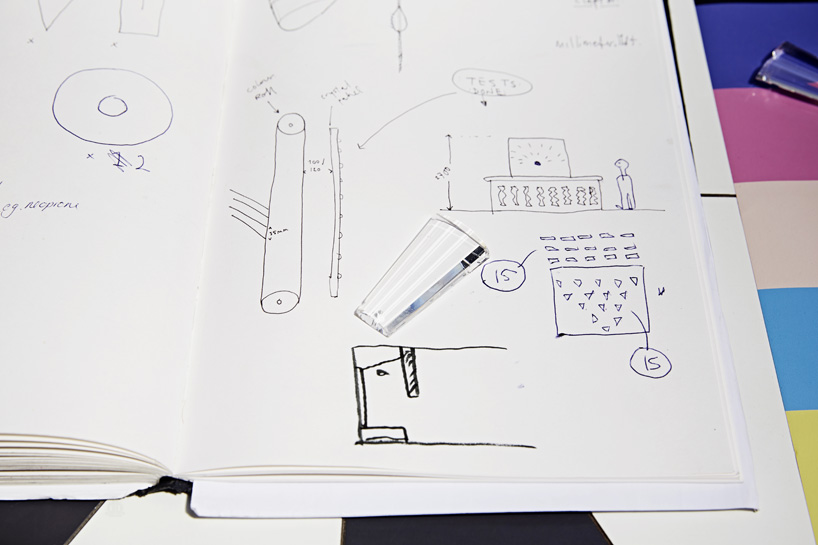 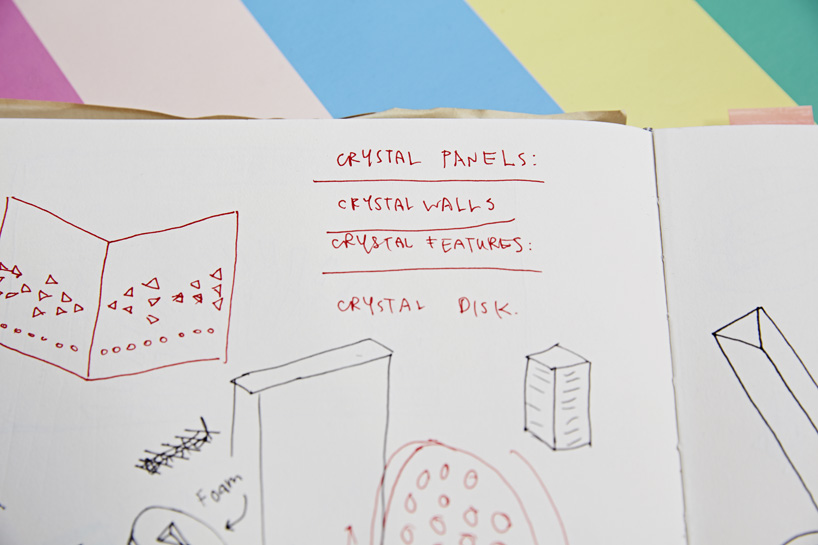 DB: what role do the crystals play in this art work?

KT: the crystals are very much the centre of this installation. they are the pixels of the artwork. their facets break the pattern behind, revealing a distorted moving graphic. I arrived at the cuts and shapes of the crystals by trial and error. it really came from just looking at how the facets react differently to pattern and light and orientation, and it involved me doing loads of tests and finding out how they would work perfectly.

when asked whether or not he worked with swarovski to get the crystals to the size and shape that he wanted, thomé replied: ‘I pitched the concept using the stock crystals that I had been given and tested. I think it was really important to use a stock crystal and then go from there, as I then knew what they could do. it was very important to keep that testing going. when I met swarovski we concluded that with the V&A as the venue we obviously had to go up in scale. we then had these crystals made specifically for this installation 2.2 times larger and all made into flat-back versions, so they sit solidly in the grid material that we had designed.’ 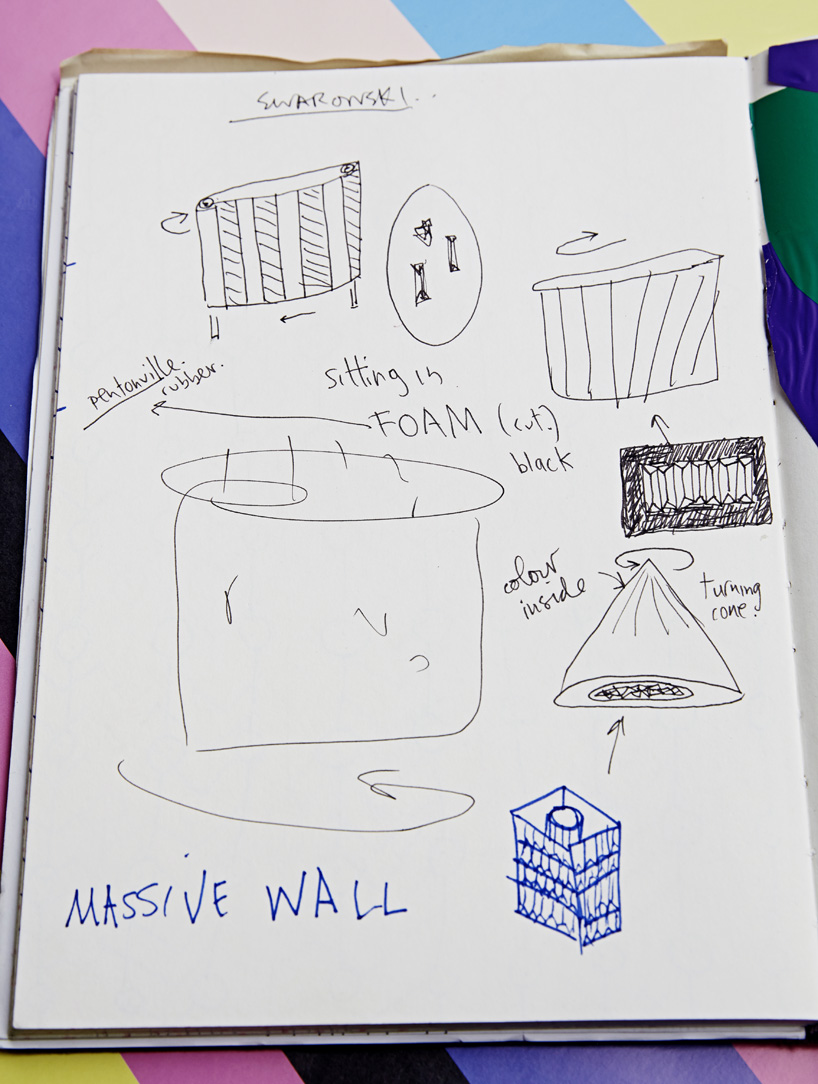 sketch of the looping mechanism, and material organization
image by mark cocksedge

DB: can you talk a little bit about the technology that you have employed in ‘zotem’?

KT: it was important to me to expose the inner workings of zotem – it is a very low-tech piece which has an almost hi-tech digital look – i really wanted to celebrate this juxtaposition. apart from using led strip lights, the installation is completely analogue. we consciously left the sides open so that the public could explore how the effect is created and how it works. 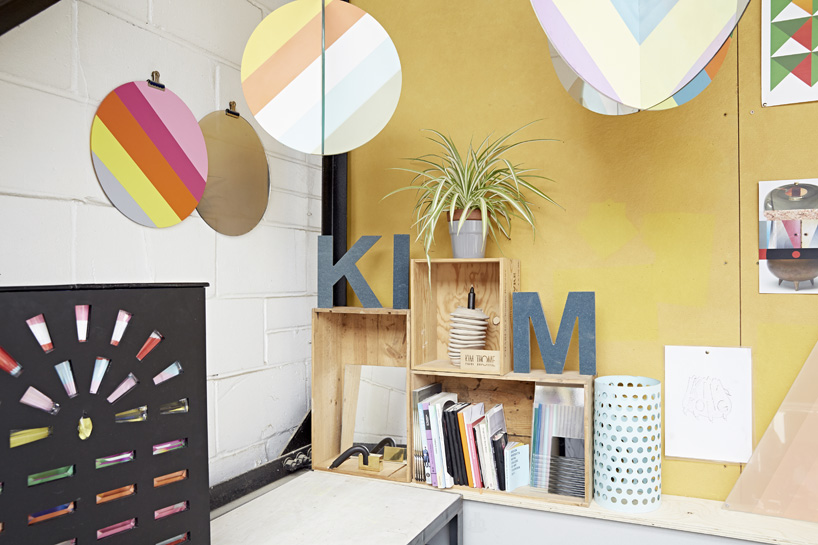 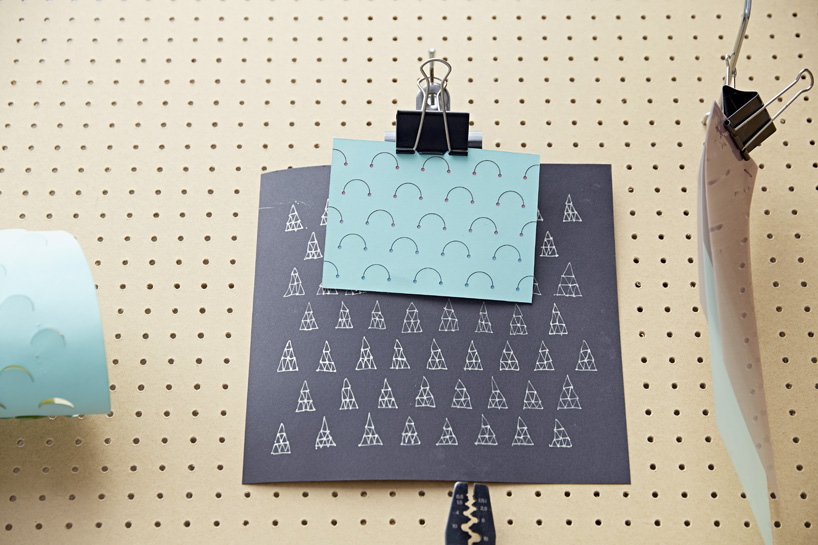 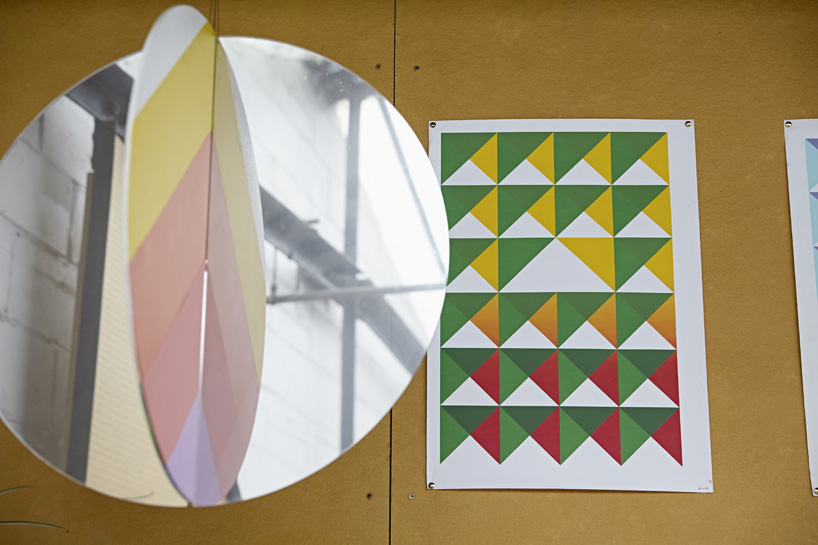 nadja swarovski, member of the swarovski exectuvie board says of the collaboration: ‘swarovski is delighted to continue its support of the london design festival, collaborating with emerging, london-based designer kim thomé to create an installation at the V&A. ‘zotem’ reveals the interplay between light, color, and the experimentation with our crystal – this high-rising structure is the perfect way to celebrate the capital’s growing design talent‘. 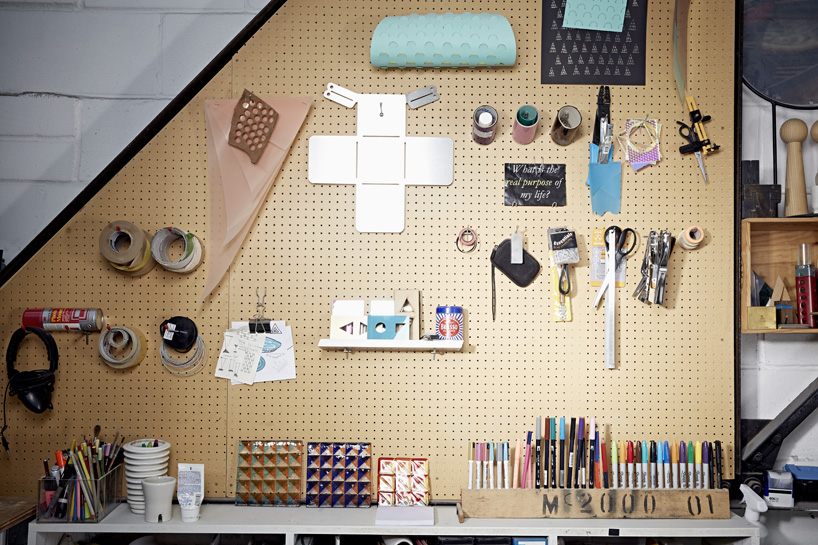 inside kim thomé’s workshop
image by mark cocksedge
kim thomé concludes on his experience: ‘I was inspired to create a piece which really fills the magnificent space within the V&A, helps visitors to climb upwards and explore the museum, and celebrates the colours and mystery created by these giant cut crystals. my visit to swarovski’s kristallwelten gave me the confidence to play with scale, and the creative and technical collaboration with their engineers allowed me to create these amazing crystals especially for this project. I love the way it looks digital, but is actually a giant visual illusion.’
‘zotem’ is on show at the V&A during the london design festival from september 19th-27th, 2015. 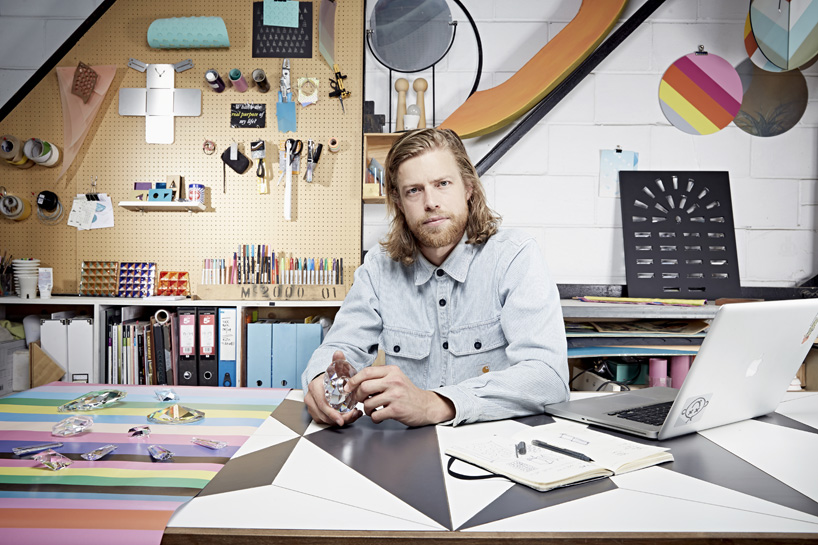