the bicycle saddle can be classified in the broadest sense, as a piece of seating furniture, beyond its singular function in sports. this has been suggested previously by castiglioni’s ‘sella’ (1957), and ron arad’s ‘puch stool’ from the early 1980s. contrary to their approach of changing the saddle into a stool by equipping it with a new substructure, anna brugger leaves the seat in its setting. she only changes its post by milling it into a spiral so that the saddle can be more easily ‘screwed into’ hard packed soil or sand, a place where pedalers are willing to take a rest. 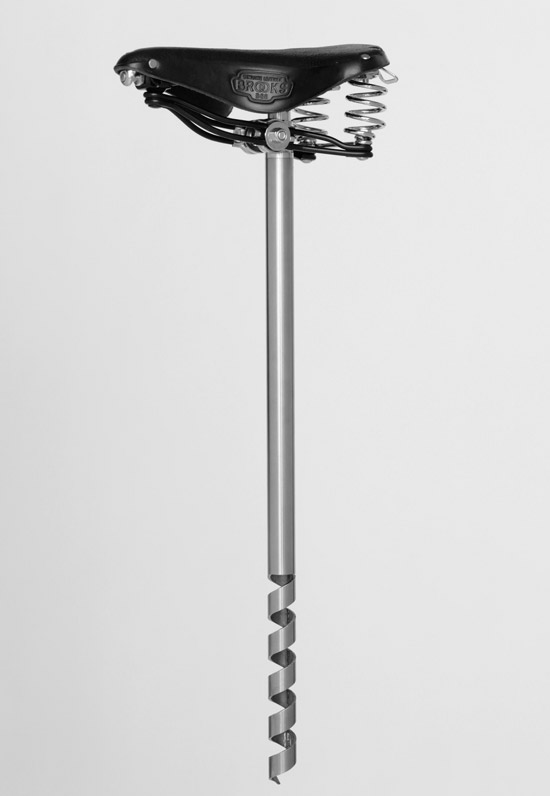 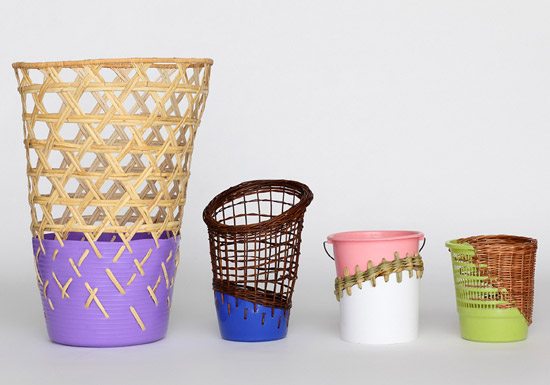 cordula kehrer‘s ‘bow bins’ are made from plastic buckets, bowls and tubs which would have normally been discarded once they start leaking or show any other kind of damage. she uses these remnants of plastic culture as a starting point for her designs. no only does she ‘repair’ these plastic objects, but she combines the mass-produced and synthetic parts with a completely different culture of materials and production, by completing her bins with wickerwork from willow, rush or rattan. through this process, she not only creates a new aesthetic, but also avoids all forms of material dogmatism. 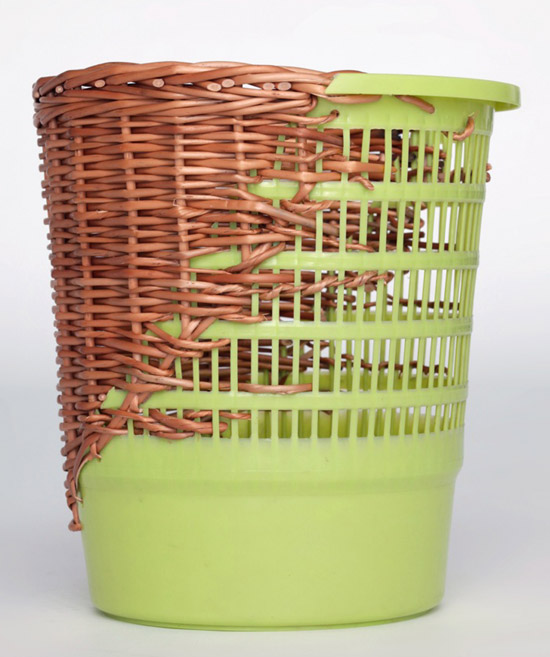 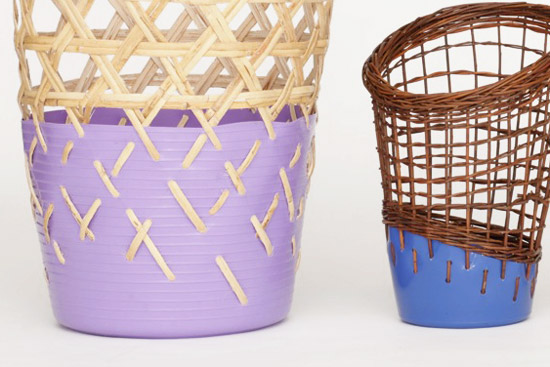 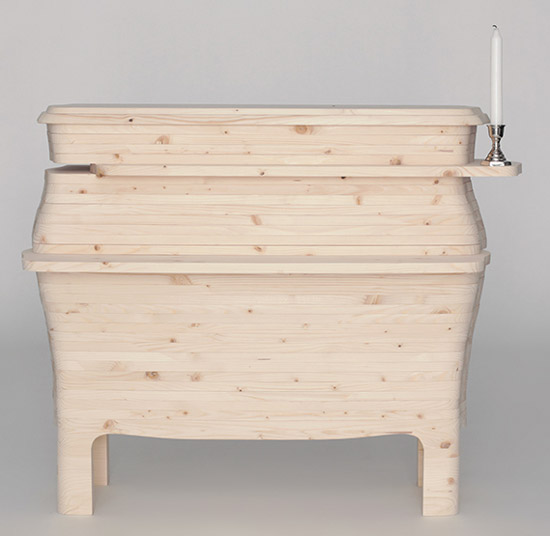 ‘pl(a)ywood’ by silvia knüppel is chest of drawers which is meant to be used in a ‘playful’ manner. like the material it is named after, the unit consists of layers of loosely stacked plywood boards. it is only its form which is reminiscent of a traditional drawers. however, it does not have any of the inner workings of one – there are no hollow spaces or closet compartments. the layers can be shifted against each other and one below the other offering a variety of possibilities for placing things. the boards can be moved to protrude to the side, front, back… and also diagonally. these surfaces can be used for holding books, glasses, bottles or other small items. ‘pl(a)ywood’ is produced in a limited edition for kkaarrlls. 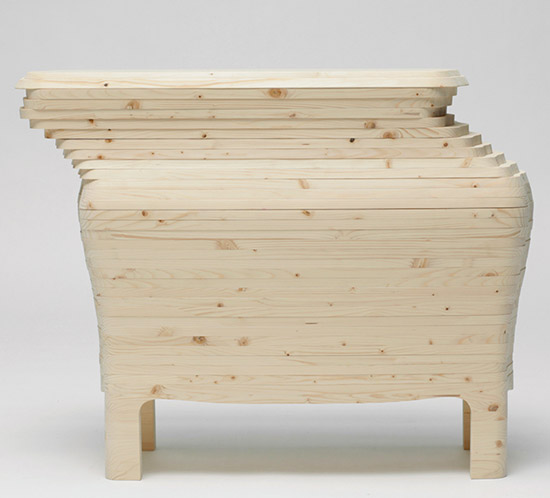 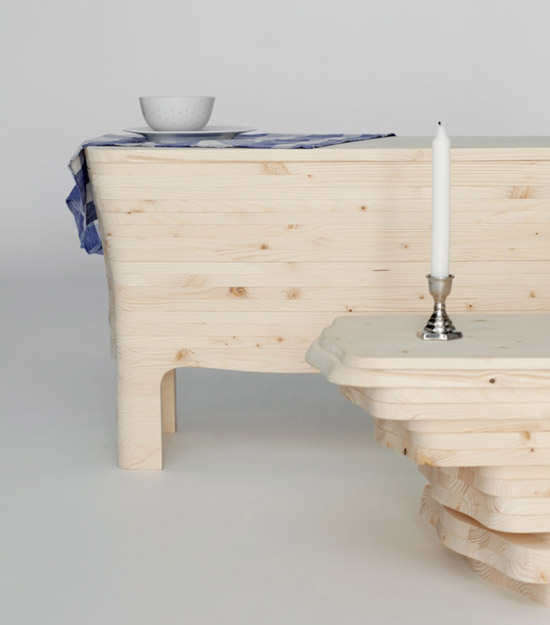 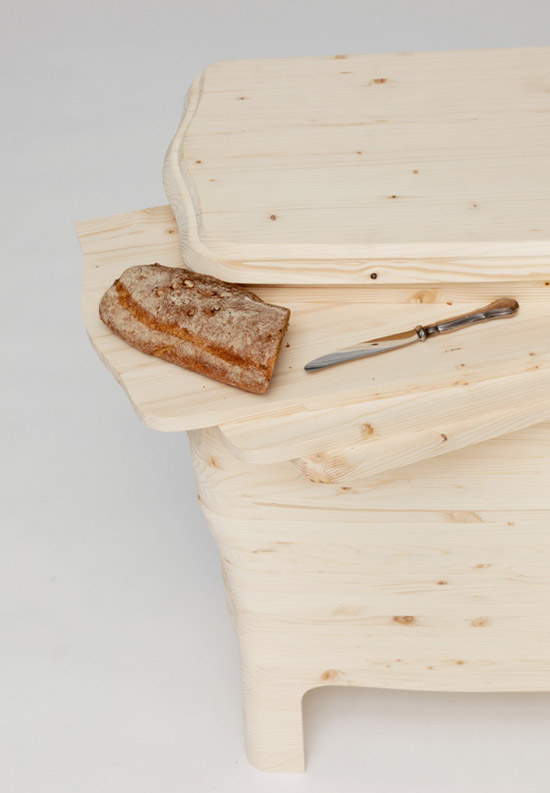 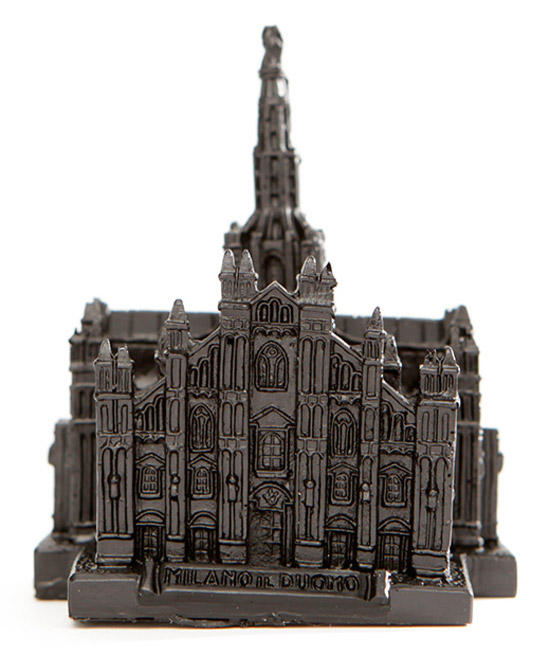 zeitgeist demands that we always stay current. new trends and tendencies are being declared at shorter intervals and confirmed by corresponding novelties. consequently, the aesthetic half-life of many products labeled as ‘design items’ tend to lean towards zero – they become outdated at increasingly shorter cycles. by using bitumen (black and oily, viscous liquid), a rather unusual material for product design, laura jungmann draws our attention to a material which, thanks to its properties, is removed from the fate of ‘up-to-the-minute’ style because it is constantly changing. at room temperature it is inexorable and uncontrollable. rigid, defined bodies thus lose their form and become unique and consequently aesthetically long-lived objects. 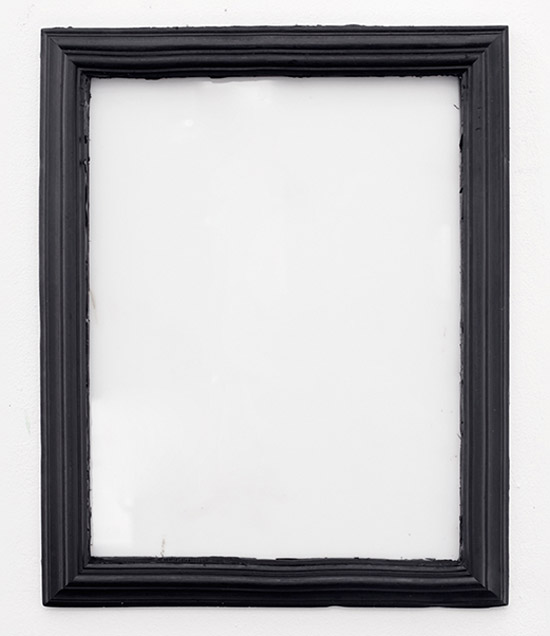 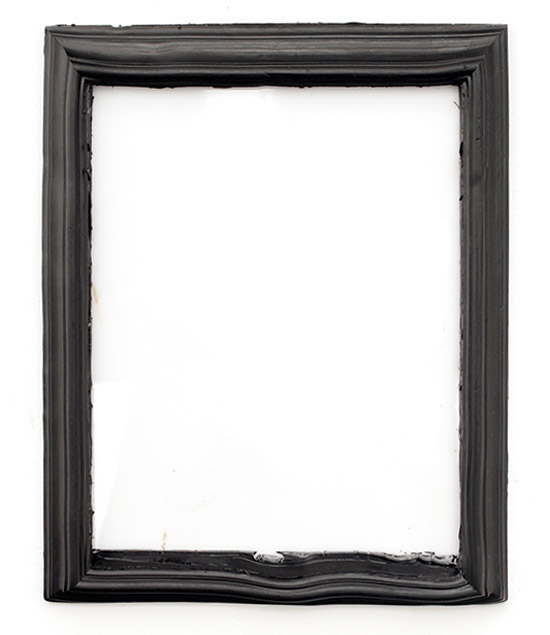 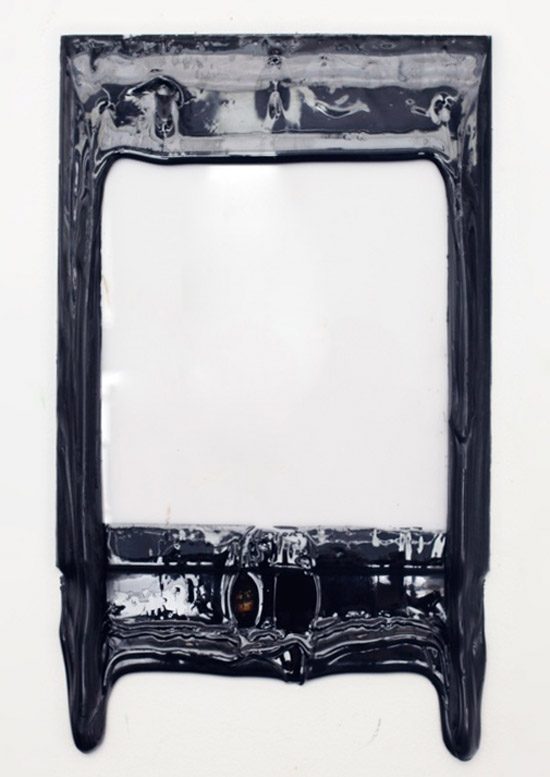 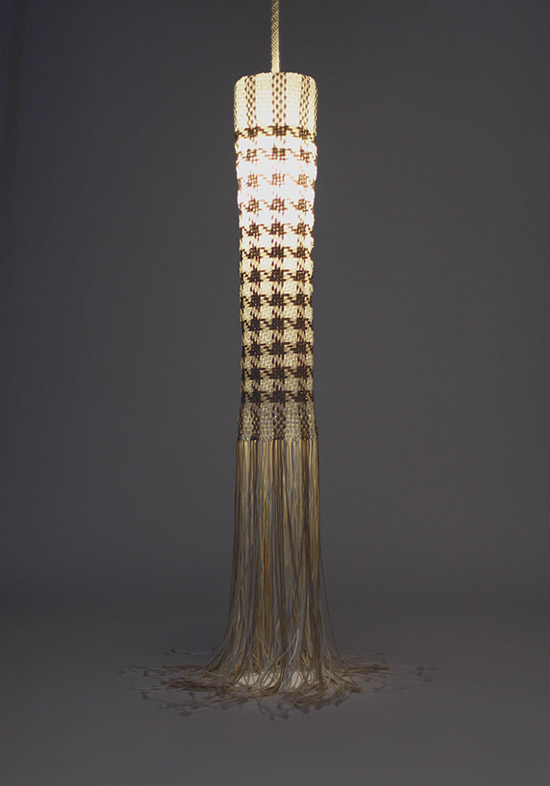 in slavic mythology, ‘rusalka’ describes a type of natural spirit which resembles a water sprite or mermaid. they are described as having long flowing, transparent bodies or floating hair, which is why they are mainly associated with the element of water. these characteristics have been applied to ‘rusalka – home couture’ a collection of lamps, carpets and cushions by sandra schollmeyer. they are meant to spark images of magical apparitions, bizarre plants, or ephemeral, mythical creatures. 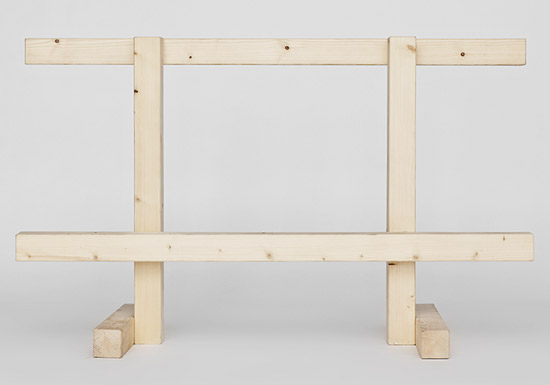 at first, this ‘bench’ by andreas grindler appears as a beam-like structure. one would not even consider it as a seating unit. only when placed at the position in the room for which it has been fit – directly on the wall – does it function become recognizable. not only does the beam form together with the respective wall space an ideal bench constellation, but the two components are also put together at a height that allows those who take a seat there to comfortably observe the situation of a room from a different perspective. 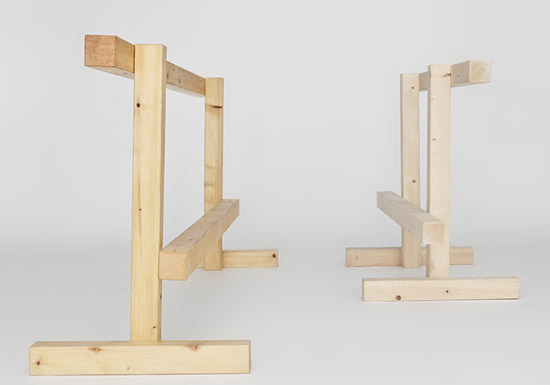 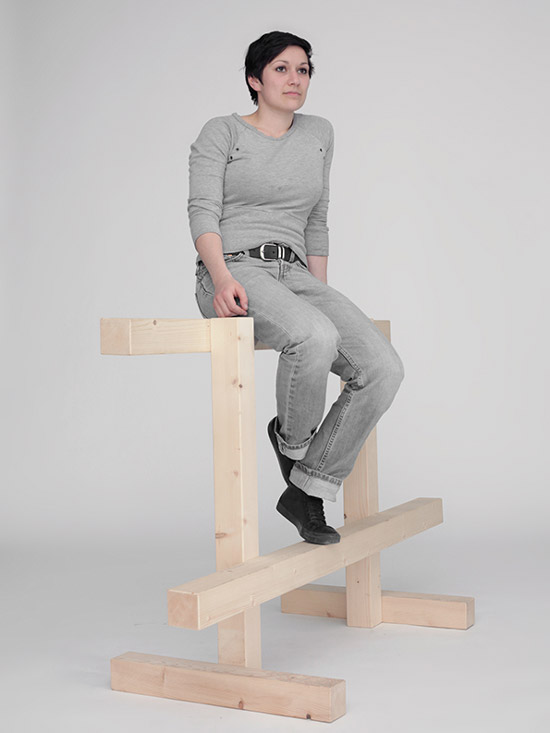 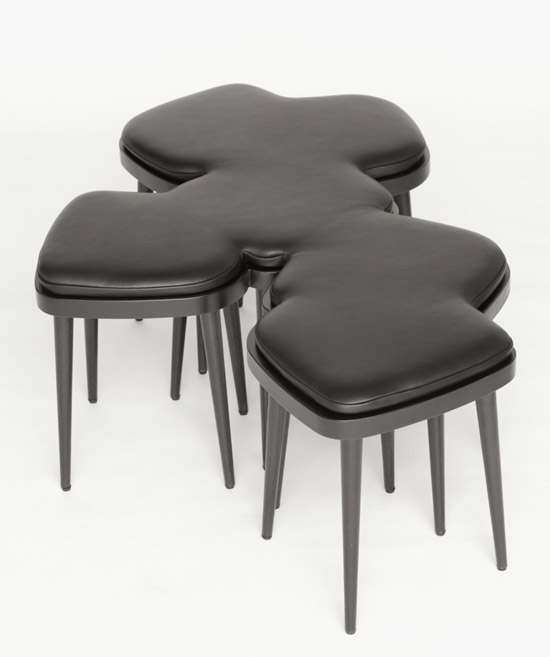 a typical principle of any bench in a public space is that it has always been based on its clear linearity. therefore, sitting in public space is often reduced to a more or less voyeuristic or simply relaxing way to pass time. yvonne fehling and jennie peiz counteract this apodictic hermeneutics with the diametrically different concept of their ‘hockerbank’ stoolbench. here, individuals face each other, passing time and socializing. people are forced to sit together in a group, interact while enjoying their surroundings. 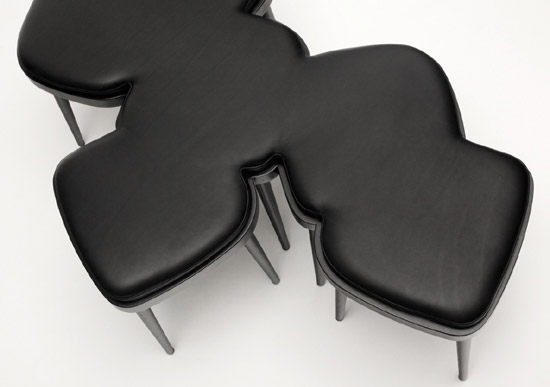 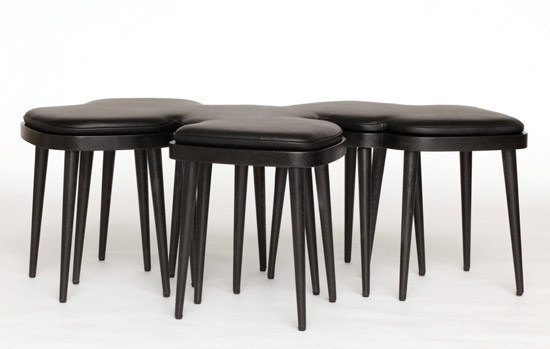 side view all images by frederik busch

kkaarrlls collection originates from the coursework of young european desgners at the karlsruhe university of arts and design (HfG) in germany and is directed by stefan legner and volker albus.