as part of the bupa great north run cultural programme, digital artists KMA (kit monkman and tom wexler) have been commissioned to create a huge, participatory, high-tech athletics tournament. taking place simultaneously in three cities in the north-east of england: gateshead, sunderland and middlesbrough each area will compete against the other across four nights.

KMA  will use projected light and thermal-imaging technology to create interactive ‘courts’ in which human movement triggers light effects. the physical movements of players determine the outcome  the games, which will run on ten-minute cycles. participants develop their game-playing skills as they progress through a number of levels to help their area to victory or to simply have fun. 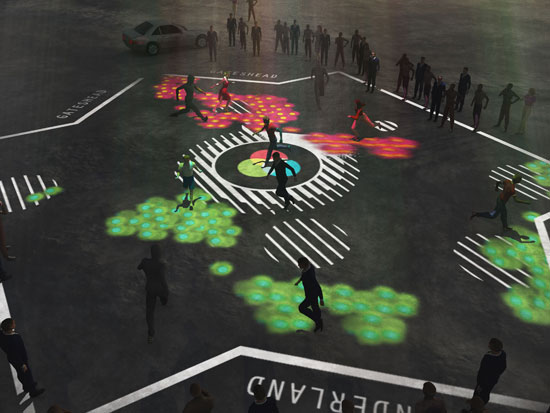 the ‘courts’ created by projected light; each court comprising a central playing area and two zones representing the other two locations. balls of light appear from the centre of each court – these projected images can be moved by players physically ‘touching’ them. the aim of the first game is for each location to gain points by moving as many balls as possible to the other locations. games last 90 seconds and 5 games make a series – through which the games increase in complexity as players become more familiar with the rules. the town or city with the most points at the end wins.

KMA’s aim is to apply leading digital innovation to large-scale live environments in order to expand the audiences’ experience of the work beyond the physical environment in which it is presented. great street games will light up the people of the region not only the buildings.