curated by designer naoto fukasawa, ‘the boundary between kogei and design’ is an exhibition running at the 21st Century Museum of Contemporary Art in Kanazawa, japan, until march 20th 2017. despite both being involved in the business of creation, kogei (craft) and design are often considered two distinct fields of work. placing an assemblage of objects and products in the context of each other, fukasawa attemps to shed some light on what, exactly, the difference is — if one exists at all. 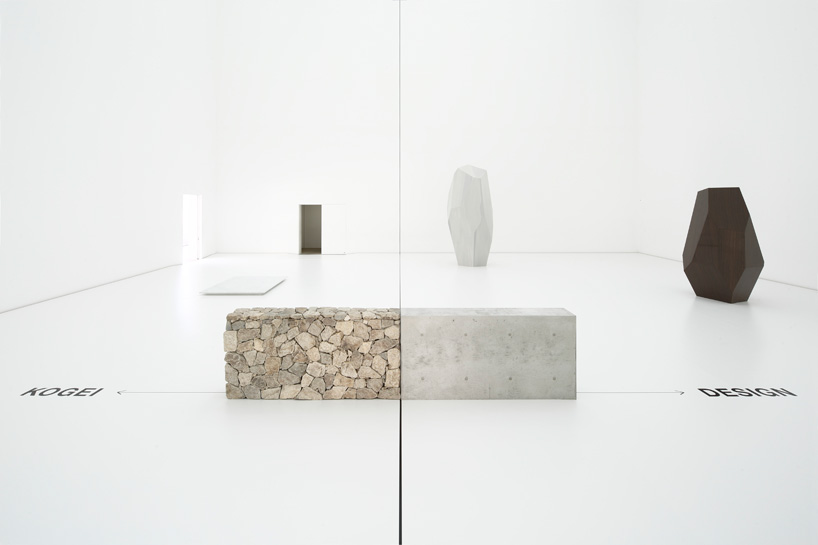 craft and design are often considered as two distinct fields of work
all images by kioku keizo, courtesy of the 21st Century Museum of Contemporary Art, Kanazawa

a thick black line neatly divides the gallery in two, sorting objects on a spectrum whose extremes are ‘kogei’ and ‘design’. some sit firmly on one side while others seem to waver. in many cases, the line of distinction splits an object directly down its middle. ‘I often hear the question of what is the difference between kogei (crafts) and design’, says naoto fukasawa, who cites the query as his impetus for creating the exhibition.

‘first, in kogei, a craftsman is the person who makes it’, he explains. ‘sometimes the production is divided among many people, but it means that the creators of that thing are plural. in the case of design, on the other hand, the designer and the person who actually makes it are different. on quite a few occasions, a machine, not a human, makes it. such things are called industrial products, and there is a planner between the designer and the industrial product.’ 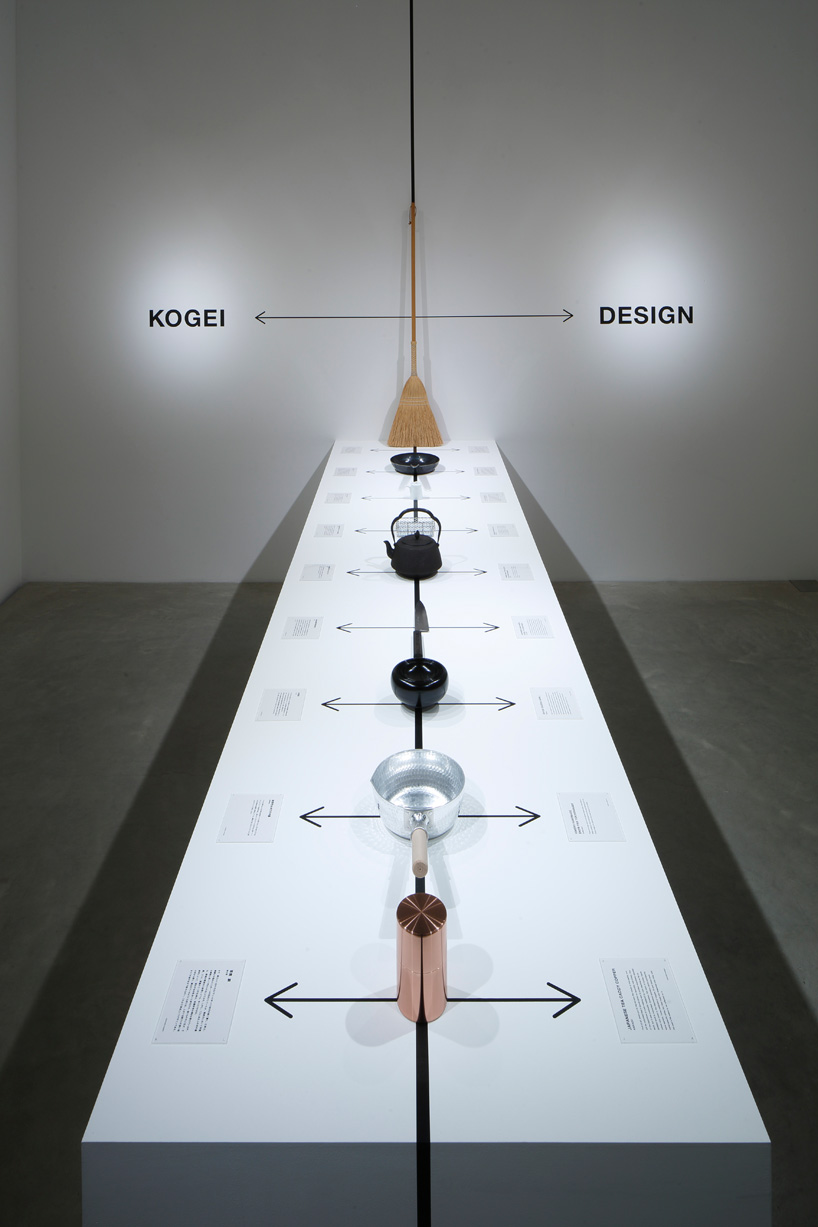 a thick line neatly divides the gallery in two

the difference can be hard to define, and is indeed not always present. often, it comes down to process, materiality, function or value. ‘materials are important for kogei’, naoto fukasawa continues. ‘materials that can be treated by hand and their sizes make up the characteristics of kogei. the word ‘design’ and the development of industrial technologies seem to have taken design away from kogei, but the value of kogei increases according to the quality of the design.’ 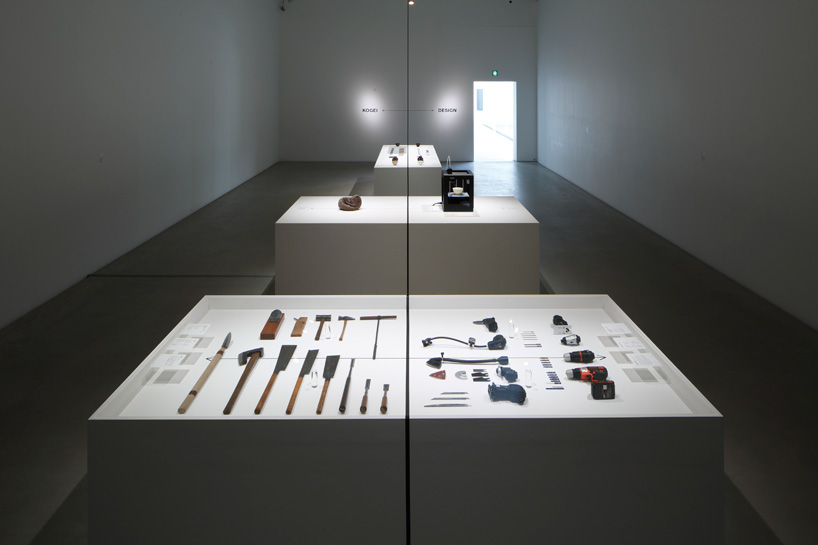 some sit firmly on one side while others seem to waver

axes or powerdrills, pots and pans — even stone and cement walls are carefully considered, and assigned a place on the scale. their individual positionings form a commentary on the traditional history and assumed future of each piece, and goes some way to shining a light on why they fall more into one category or the other. while ‘kogei’ items may be considered valuable in terms of materiality, scarcity or the personality behind them, ‘design’ excels more in fields of durability, accessibility and mass producibility. 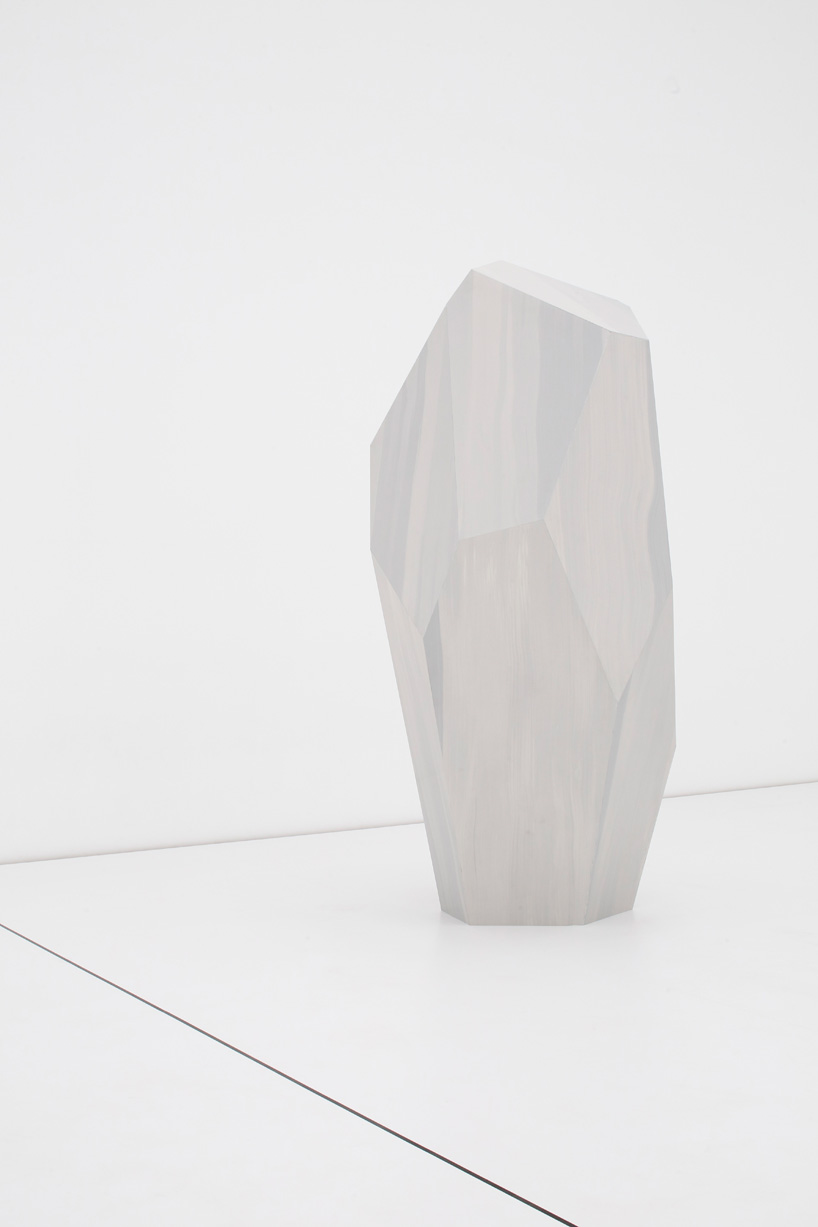 more than anything, the exhibition intends to showcase the fact that the two terms are not mutually exclusive. taking objects from both extremes and blurring the boundaries in between, naoto fukasawa takes a balanced look at the forms and functions that shape the definitions of both. 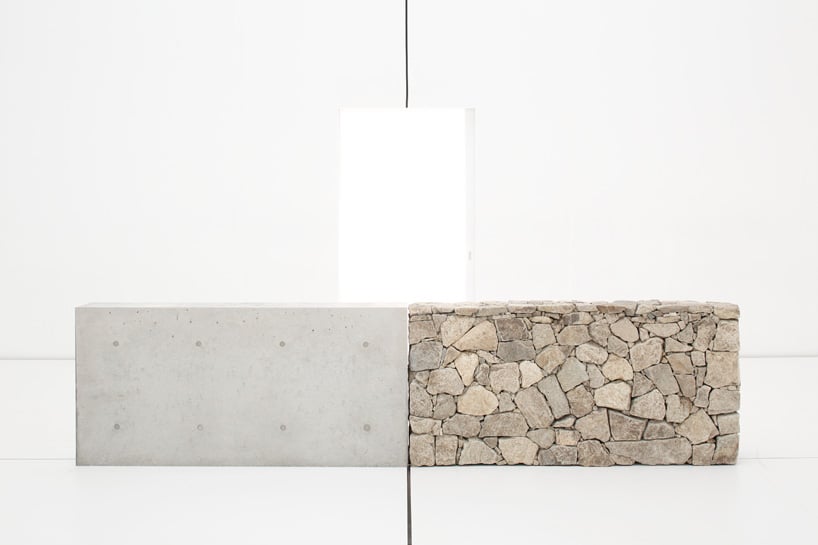 even stone and cement walls are carefully considered, and assigned a place on the scale

naoto fukasawa expands on the various themes that informed his design of the exhibition:

the material is rooted in the region. from its special character and strengths (materiality) the kogei artist derives motivation to create and produce form. in all processes, from kogei to industrial manufacturing, the special character of the material is minutely refined and reflected in the making of things. common to all processes, whether kogei and industrial manufacturing, is the jig. these days, however, with the debut of digital production machines (3D printers, laser cutters, CNC milling, etc.) it has become possible to manufacture without a jig. 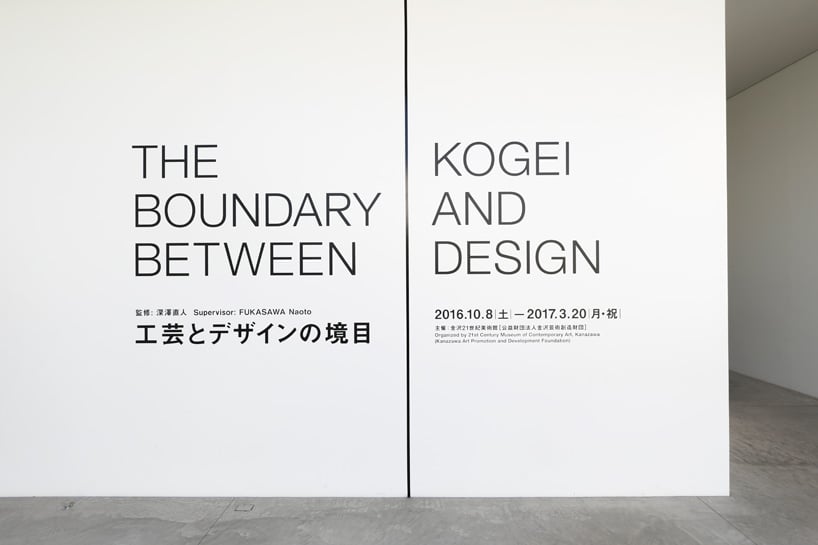 the difference is hard to define, and indeed not always present

industrial manufacturing (design) originally began by imitating kogei. machines, in other words, sought to imitate handiwork. this endeavor, then, was hugely successful. so much so, the layman was unable to tell the difference. and so much so, people forgot the ways to make things. 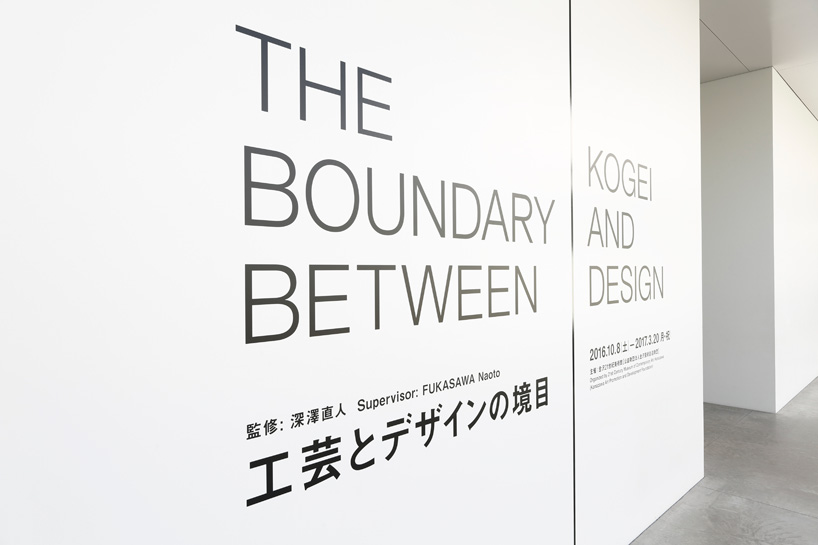 often, it comes down to process, materiality, function or value

in the interval between kogei and design are ‘kogei-like design’ and ‘design-like kogei’. the begging bowl (oryoki) shows the concept of a module and is an example of ‘design-like kogei’ seeking a harmony between itself and other designs. ‘kogei-like design’, on the other hand, uses a form to manufacture a large volume at one time, and yet, finishes the process with hand-refinement and post-processing. designer yanagi sori also mass-produces kogei-like forms created by hand. through careful hand finishing, the work achieves a consummate form. 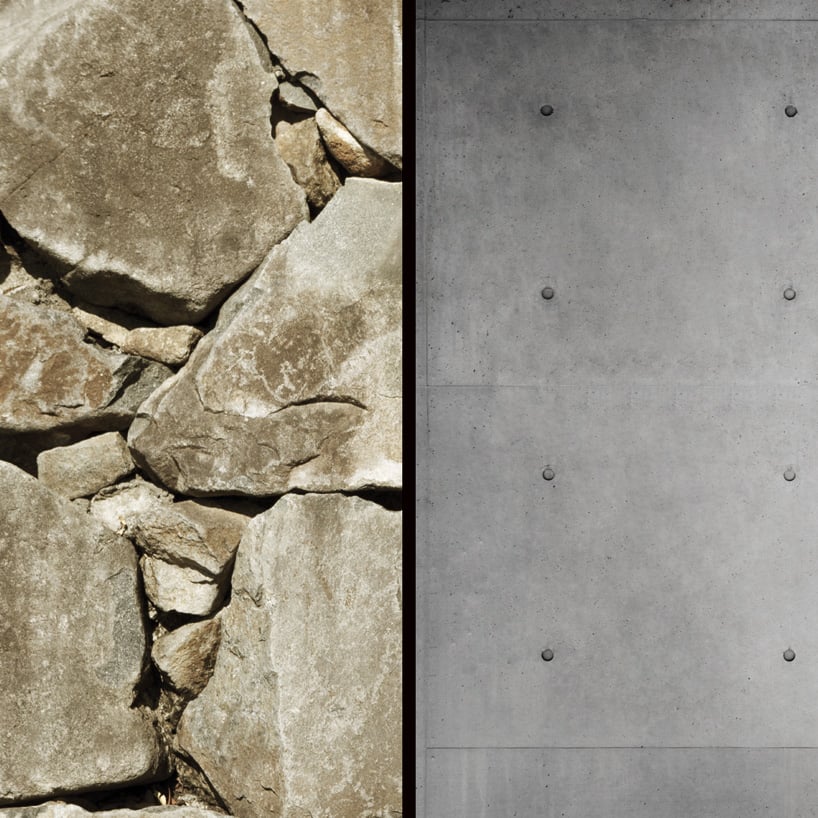 theme 4: change over the years

with time, the feel and tactile qualities of an object change, and the user living with that change develops affection for the object. time not only brings physical change to an object, it also seasons the value of its maker or brand. braun products, a synonym for design, were cold in the beginning, but today, they seem warm and awaken our affection. time, we might say, turns design into kogei.

theme 5: the boundary between kogei and design

the kogei artist works by hand and yet his skill is exceedingly fine and elaborate. still, the precision of his work cannot match the mathematical accuracy of a precision machine. printing technology has also become so advanced we no longer can distinguish real wood from fake. high quality wood, it was always thought, is wood without knots, but lately, people deliberately choose wood products displaying knots. wall paper of finer appearance than the actual material, with added functions such as humidity absorption and desorption, is also pleasing.

‘the boundary between kogei and design’ is showing at the 21st Century Museum of Contemporary Art in Kanazawa until march 20th 2017. 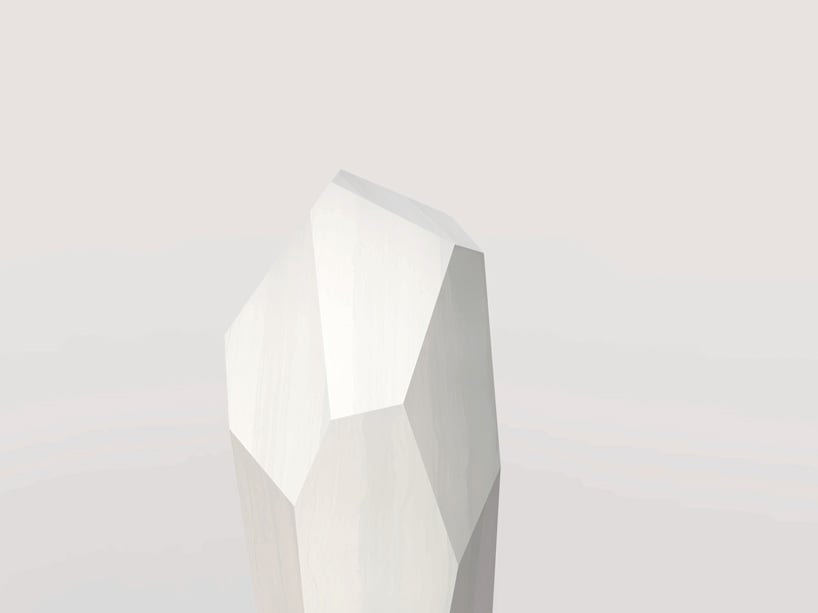 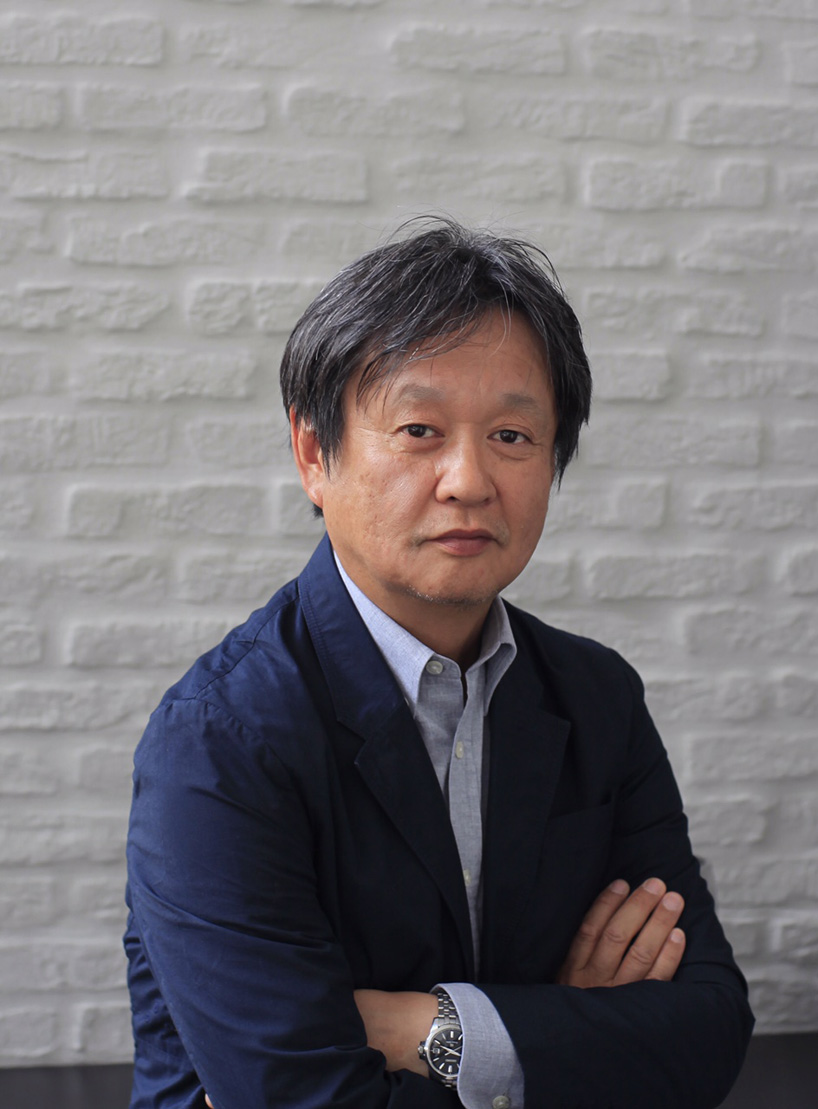