in his solo exhibition at the kunsthalle bielefeld, konstantin grcic puts the spotlight on the pedestal, exploring its function and challenging its traditional form as a display. thus, ‘abbildungen’ should neither be considered a survey or retrospective of the german creative’s practice, but rather an opportunity in which he presents his design work — a combination of industrial aesthetics with experimental, artistic elements that are functional, yet occasionally cumbersome, and sometimes deliberately disturbing — in a way that considers the architecture and context of the museum space. 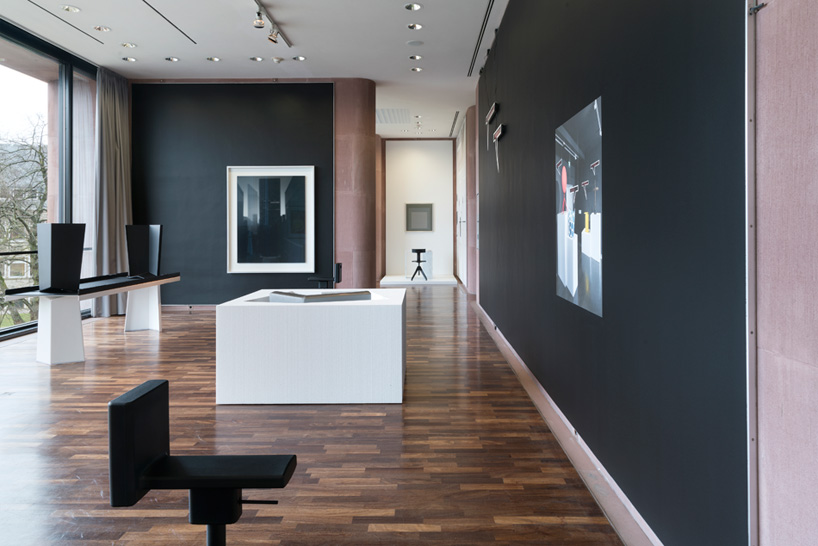 in his exhibition at the kunsthalle bielefeld, konstantin grcic puts the spotlight on the pedestal

on this occasion, konstantin grcic takes the formal grammar of the pedestal and uses this as the foundation of his show. a typically monolithic block used for displaying objects and sculptures, the presence of the plinth is often an overlooked element of the gallery space that has continuously been brought into question by sculptors, ever since auguste rodin’s design for the ‘burghers of calais’ (1884). in part, what has fueled this proposition is grcic’s design of a new stand for rodin’s ‘la douleur’ (part of the kunsthalle bielefeld‘s collection). in his rendition of the pedestal, grcic places the classic marble sculpture in juxtaposition with today’s industrial aesthetic in the form of a lightweight construction made from metal shelving elements, contrasting the heavy stone artwork. similarities are seen with the companionship of grcic’s best-known piece of furniture, ‘chair_ONE’, placed next to it. in this case, the design is presented with a concrete base that supports the metal grid-like seat shell, in a way placing it aloft in a distinct way much like a sculpture on a pedestal, while simultaneously anchoring it in place. 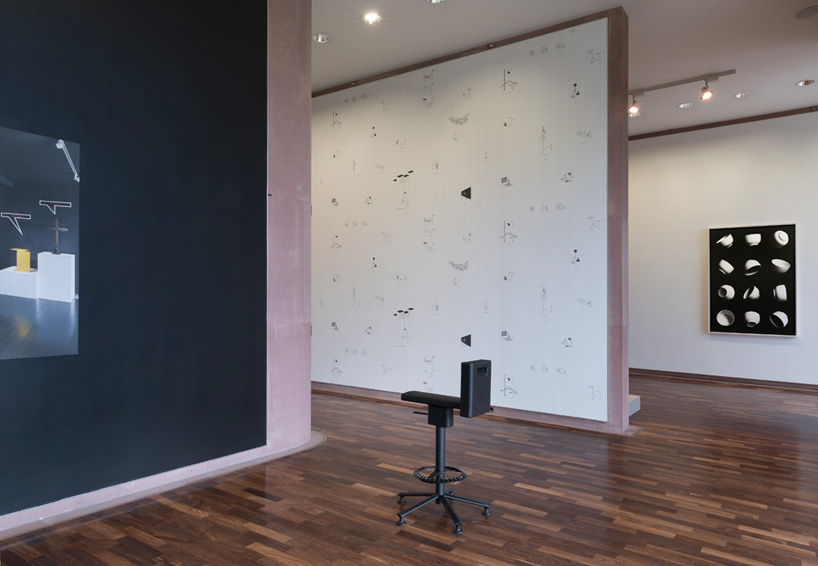 some works are displayed without a pedestal, without any distance between them and the ground

today, the pedestal continues to be a theme in art discourse whereby artists are still very much aware of its significance and function. in its long tradition, the pedestal has become an integrated component of the work — a conceptual part of the sculpture. grcic not only employs pedestals in his exhibition, but he explores and questions their function; taking into consideration that when something is placed on a pedestal, it conjures up a particular perception and aesthetic reception from viewers, as opposed to not being presented on one. over several gallery spaces, grcic puts forth different typologies of the pedestal, ultimately rendering each of his industrial products as cultural artifacts, their interplay with the pedestals allowing for aspects of their design to be questioned. 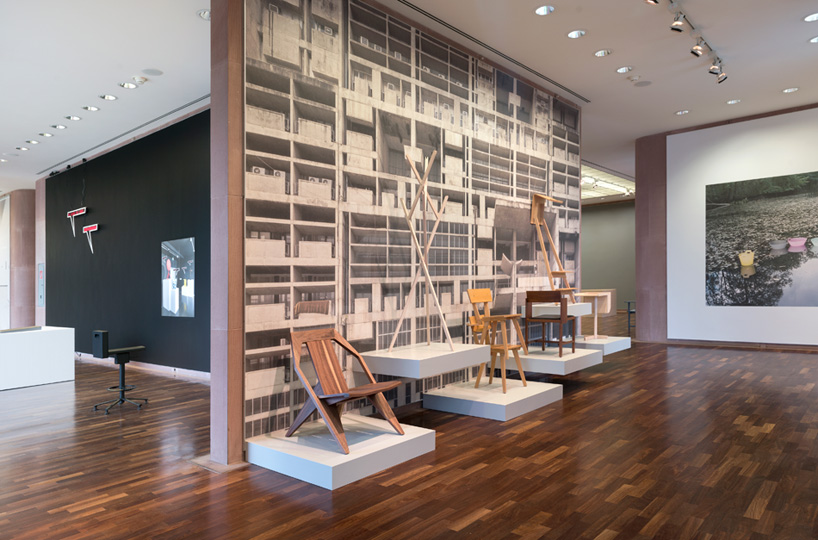 in one instance, grcic reverses the pedestal’s traditional function. rather than elevating the objects on display, he places them within open boxes — two products in each — facing one another; sometimes placed on different levels. in this way, the viewer is forced to look at the pieces from above, which offers a certain level of abstraction. this means of arrangement also draws one’s gaze towards the material characteristics, the color, the interplay of positive and negative forms. 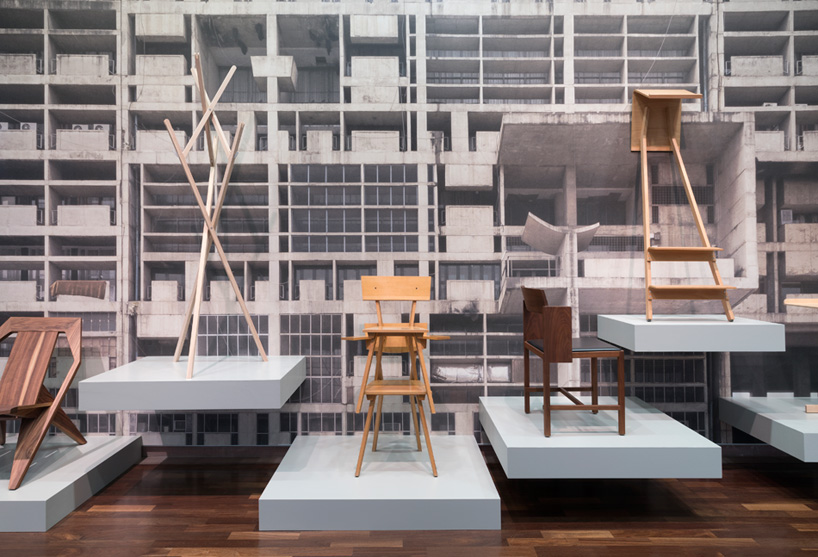 in one instance the pedestal stands as part of a two-dimensional space — against it, embedded in it, rising out of it

another space sees the designs of grcic standing within an environment — set against it, embedded in it, rising out of it. in this context the designer elevates a yellow version of his ‘sam son’ chair so that it has the presence of a throne, exhibited in front of a landscape with a pond in which the designer’s ‘2hands’ containers appear to be floating like lilies. in this instance, the pedestal is a serene monolith in its subdued landscape. nearby, a gallery wall features a section of le corbusier’s ‘secretariat building’ (1962) in chandigarh, india. here, the modernist architecture stands as the backdrop to wooden chairs, a hat stand, and a ladder, each of which are placed on staggered pedestals extending from its ‘façade’; so that it was as if one were looking at them three-dimensionally.

elaborating on this scheme, grcic also places his work in three dimensional settings that are informed by an interplay of wallpapers and low platforms. in these contexts his furniture seems as if it has found a natural home within the kunsthalle bielefeld. 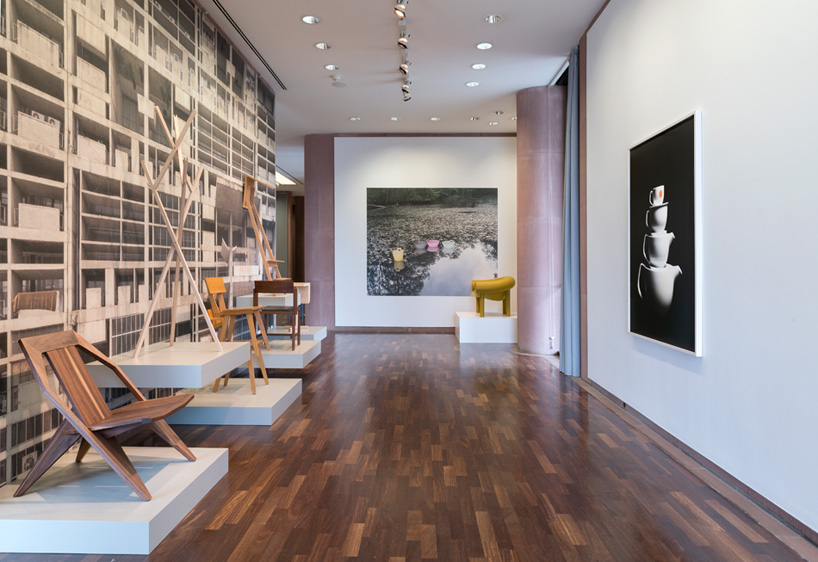 general view of the ‘abbildungen’ exhibition at the kunsthalle bielefeld

grcic also draws on the notion that the pedestal or plinth forms a fundamental part of the sculpture or object in which it supports, considering the display and the displayed as one entity. viewers observe the designer positioning two of his ‘pallas tables’ with their horizontal tops one over the other, thus mirroring and making extremely evident, the sculptural qualities of the furniture pieces. further playing with this idea, grcic exhibits his ‘hieronymous’ working/seating unit, which can only be fully understood when it rests on the ground, simultaneously making it object and pedestal. the designer places ‘hieronymous’ on the ground, but envelops it by its display so that in its entirety, object and pedestal appear as a monolithic block. 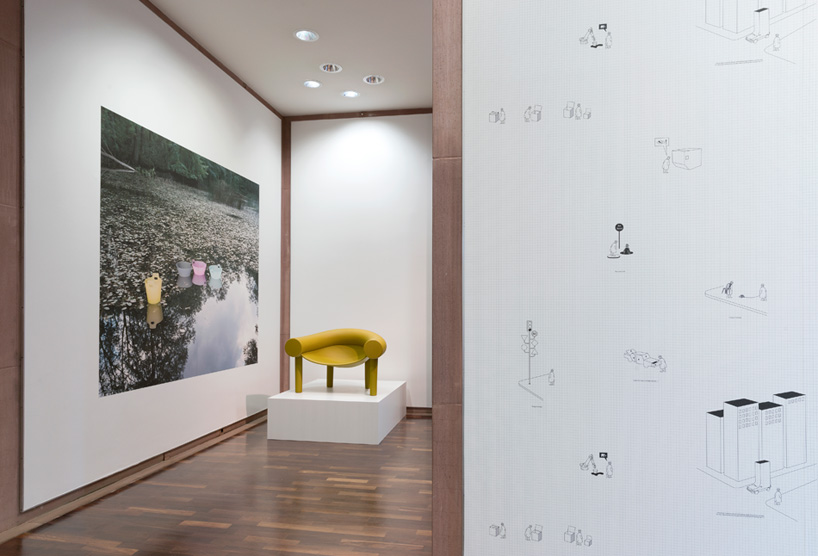 in one instance, the designer elevates a yellow version of his ‘sam son’ chair so that it has the presence of a throne

while grcic extensively investigates the formal possibilities and impressions of the pedestal, he does not forget its origins and has also conceived more traditional formulations of the display block. for example, he displays his ‘diana’ series of folded sheet iron end tables on top of white, rectangular prisms that he has designed, so that they become sculptures within the museum space. their interplay of open and closed sides, as well as their horizontal and vertical surfaces and edges, are all emphasized by the pedestals on which they sit; precisely accommodating the outlines covered by the furniture pieces. 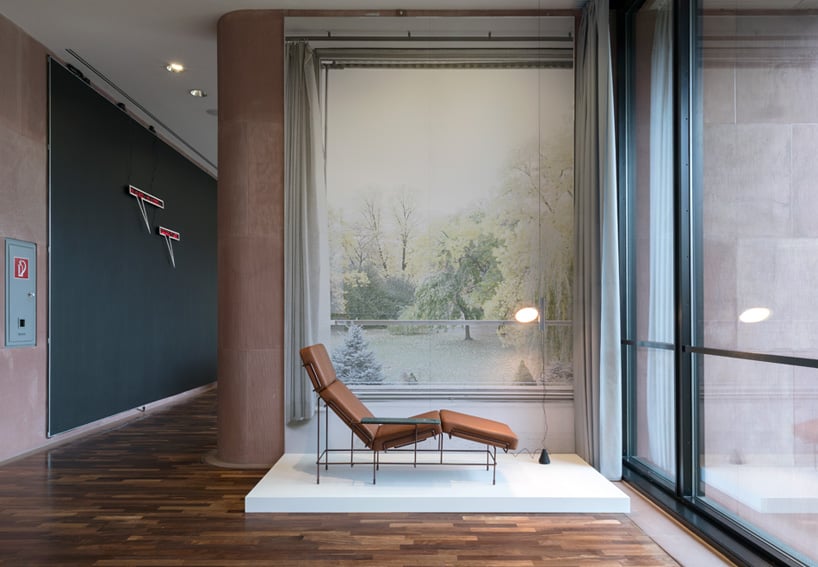 ‘abbildungen’ concludes with a space that is completely outfitted in particle board, resembling the interior of the open box pedestals seen at the beginning of the exhibition. in this gallery, viewers physically enter the pedestal, taking in insights from the office of konstantin grcic industrial design. skilled crafts and technologies used by the studio are seen in the foreground, alongside manufacturing processes, functional testing and drawings that illustrate moments from the design process. together, they sum up the steps necessary in communicating his particular path towards realizing his industrial products. 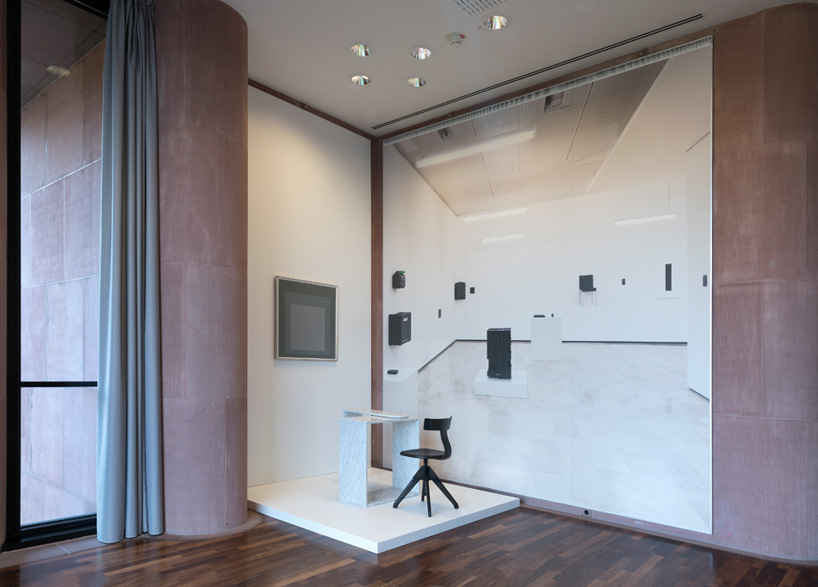 in developing an entire exhibition concept on the theme of the pedestal, grcic challenges its notion and its context within the gallery space to create a specific scenography for presenting his portfolio of products. the result ultimately sees each product as an autonomous work of art, existing within its own spatial dimensions, stimulating the perspective of the viewer and their interaction with the works on show  — redefining the viewer’s space, and the presentational one. 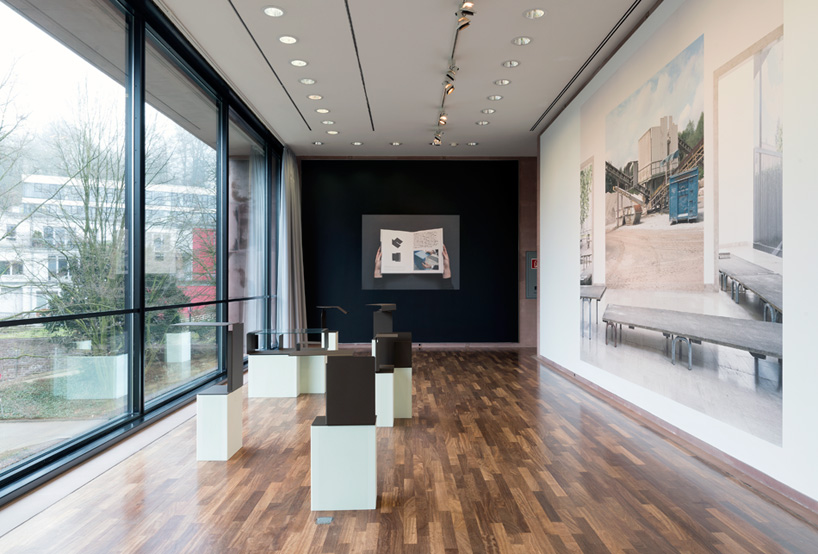 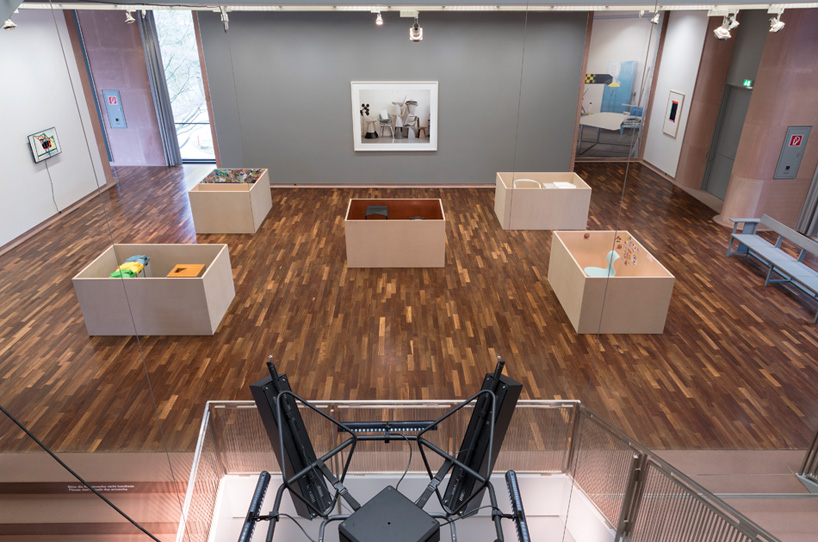 here, grcic reverses the pedestal’s function – instead of elevating the objects, he places them in open boxes 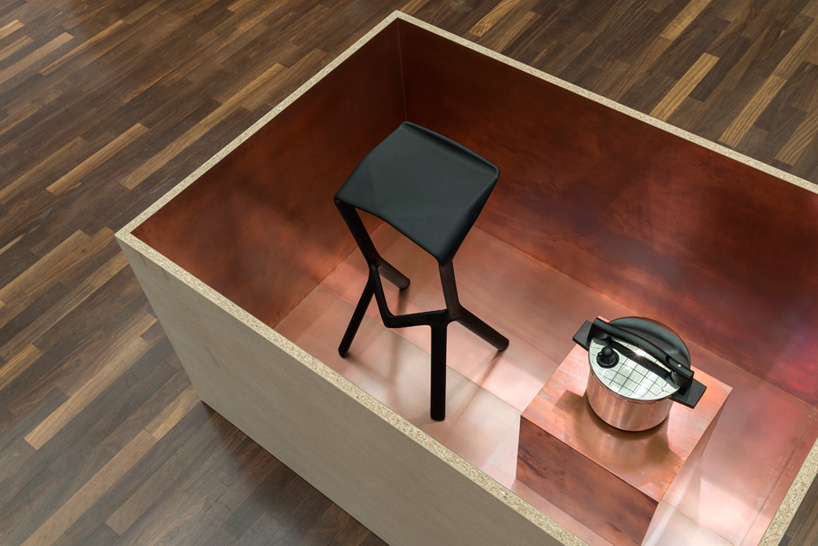 placing his designs in boxes forces the viewer to look at them from above, offering a certain level of abstraction 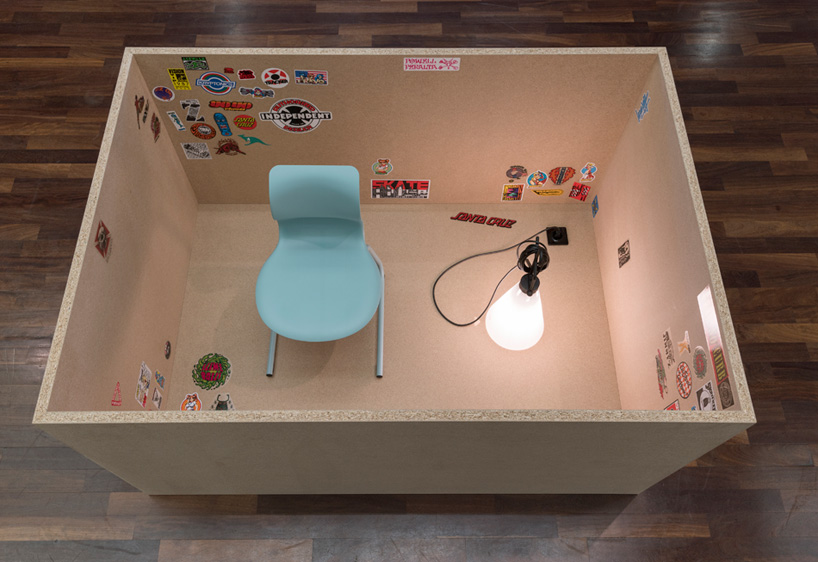 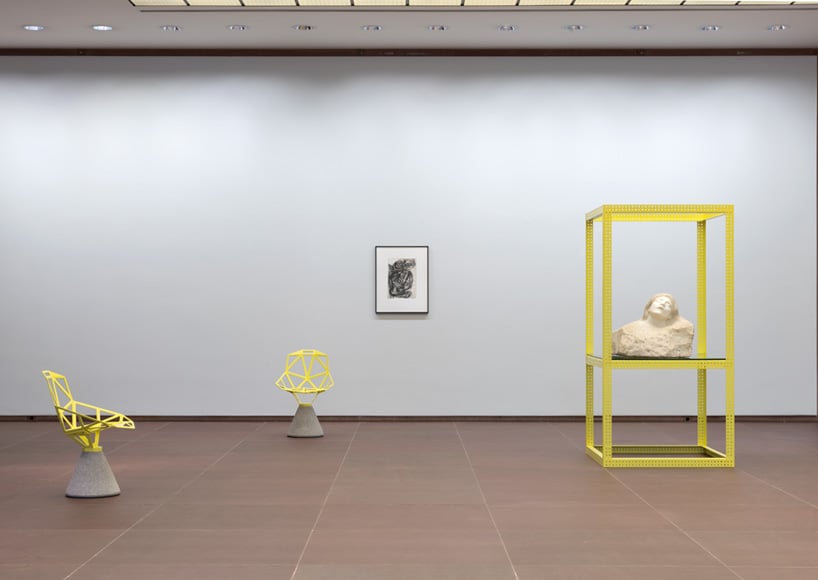 the juxtoposition of classic sculpture with an industrial aesthetic

grcic’s ‘chair_ONE’, set on a concrete base supports the grid-like seat shell like a sculpture on a pedestal

the designer's 'lunar' lamp in the staircase allows viewers to observe the lighting piece outside of its functional context, even though it could be a functional object in this placement

within the boxes, the products are sometimes placed on different levels, altering perception

grcic does not forget the origins of the pedestal, place his 'diana' tables on simple white boxes

in some instances, the white boxes make the products appear as sculptures in the museum space

general view of the 'abbildungen' exhibition